Despite advances in diagnostic, surgical/interventional, and supportive care strategies, lung cancer remains a lethal entity representing the most common cause of cancer-related mortality worldwide (1). Non-small cell lung cancers (NSCLCs) represent the vast majority of these cases. With more than half of all patients presenting with advanced stage disease at initial diagnosis, there has been a persistent and pressing need for improved systemic therapies—both with regards to efficacy and toxicity. Even so, platinum doublets have remained the mainstay of palliative therapy for the past several decades. Based on a number of randomized trials, platinum doublet chemotherapy administered to fit and willing patients achieves improved survival and quality of life (QoL) as compared to best supportive care alone and has long remained the unchallenged standard of care (2). Though many chemotherapeutic agents have been studied in combination with a platinum agent, none has demonstrated superior outcomes in unselected cohorts (3).

In recent years, there have been key developments in our understanding of this heterogeneous disease, with growing appreciation for the impact of tumor-specific histopathology and molecular characterization on the clinical course and response to various systemic therapies. Specifically, this includes demonstration of a survival benefit in patients with nonsquamous histology receiving the antimetabolite pemetrexed as part of the platinum doublet (4), pemetrexed maintenance therapy in patients with adenocarcinoma histology and stable disease/treatment response following four to six cycles of first line platinum doublet therapy (5), and addition of bevacizumab to platinum doublet in patients with nonsquamous disease (6).

The recognition and characterization of molecularly defined subsets of patients with oncogene-addicted advanced NSCLC and actionable therapeutic targets has further transformed the landscape of this disease. Identification of oncogenic driver mutations or gene rearrangements in the epidermal growth factor receptor (EGFR) (10–15% of advanced NSCLC), anaplastic lymphoma kinase (ALK) (3–5% of advanced NSCLC), and ROS proto-oncogene 1 (ROS1) (1–2% of advanced NSCLC) and application of precision tyrosine kinase inhibitors (TKIs) have rendered the ability to optimally match targeted systemic therapies with tumor-specific abnormalities—particularly in lung adenocarcinomas.

To date, seven oral targeted therapies have been approved by the United States Food and Drug Administration (FDA) for use in molecularly defined subsets of advanced NSCLC: erlotinib, gefitinib, and afatinib for tumors with sensitizing EGFR mutations; osimertinib for tumors with the EGFR T790M mutation; crizotinib, ceritinib, and alectinib for tumors with ALK gene rearrangements; and crizotinib for tumors with ROS1 gene rearrangements. Across multiple randomized studies comparing these TKIs with conventional cytotoxic chemotherapy, a consistent theme has emerged: brisk [objective response rates (ORRs) on the order of 60–80%] and durable improvements in clinical outcomes [progression-free survival (PFS) on the order of 9–12 months] with lesser toxicity and better QoL as compared to chemotherapy (7-14). Thus, since 2013, expert guidelines have recommended routine testing for EGFR mutations and ALK gene rearrangements on all tumor specimens for patients with advanced NSCLC and an adenocarcinoma component (or inability to exclude adenocarcinoma)—regardless of clinical, demographic, or other characteristics (15). 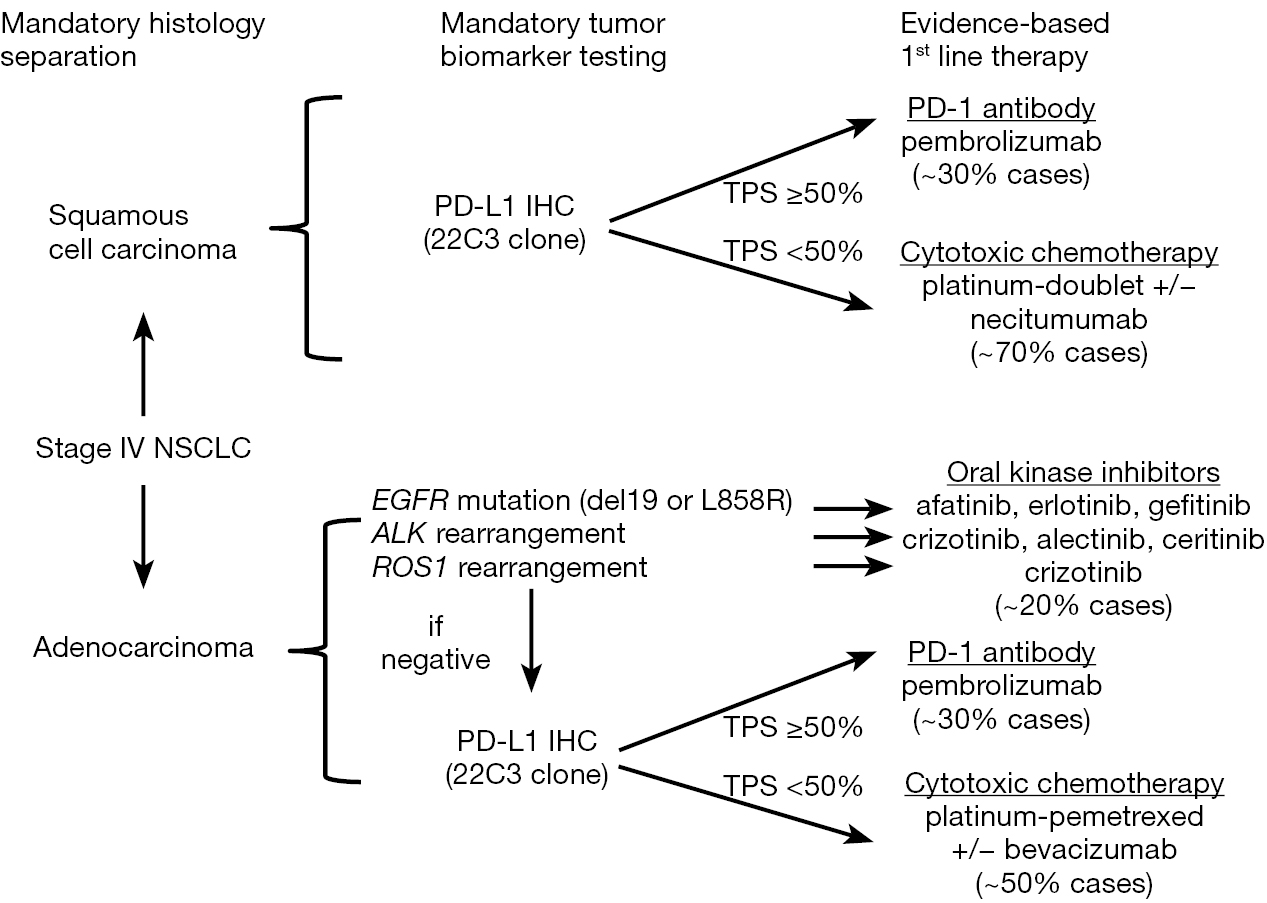 Even despite such advances, however, the median overall survival (OS) for advanced NSCLC treated with palliative chemotherapy has not been moved beyond 9–12 months. Further, availability of an actionable, FDA-approved targeted therapy will only be relevant in some 20–25% of all patients with advanced NSCLC—and primarily in patients with adenocarcinoma histology. More tailored paradigms for management of squamous cell lung cancers is an area of unmet need, as use of pemetrexed, bevacizumab, or oral TKIs is generally not indicated/relevant in this tumor histology. Thus, moving beyond conventional chemotherapy to identify more broadly applicable, durably efficacious, and less toxic systemic therapies has remained a dire unmet need in advanced NSCLC—perhaps until now.

Immune checkpoint inhibitors have afforded a novel approach to antineoplastic therapy. By impeding inhibitory signals affecting cancer-targeting T lymphocytes, the host anticancer immune response is reignited. Monoclonal antibodies inhibiting both programmed death 1 (PD-1) (nivolumab and pembrolizumab) and programmed death ligand 1 (PD-L1) (atezolizumab) have demonstrated significant promise in the management of advanced NSCLC. Notable and durable responses were observed in the early phase trials of these drugs in heavily pretreated, treatment-refractory patients with advanced NSCLC (16). Subsequent large randomized studies have demonstrated the superiority of the immune checkpoint inhibitors nivolumab, pembrolizumab, and atezolizumab as compared to palliative docetaxel in the second line setting with regards to OS, magnitude and durability of response, and treatment-related toxicity (17-20). Since October 2015, three immune checkpoint inhibitors (nivolumab, pembrolizumab, and atezolizumab) have garnered FDA approval for use in advanced NSCLC without actionable EGFR/ALK aberrations in the first (pembrolizumab) or second (nivolumab, pembrolizumab, and atezolizumab) line settings—regardless of squamous/nonsquamous histology.

Identifying determinants of therapeutic benefit by way of predictive biomarkers has been an ongoing era of investigation and debate. PD-L1 status—either on tumor cells, tumor-infiltrating immune cells, or both—has been the major emphasis. However, clinical trials of PD-1 and PD-L1 inhibitors in advanced NSCLC to date have shown conflicting results with regard to the predictive impact of PD-L1 immunohistochemistry (IHC). Definitions of PD-L1 “positivity” (i.e., staining of tumor cells vs. tumor-infiltrating immune cells or both and quantitative thresholds) have varied considerably across studies as have methods of PD-L1 testing (i.e., different diagnostic antibodies, scoring systems, and technical platforms). Not unsurprisingly, therefore, correlation between biomarker positivity and treatment response rates has varied widely (13–83% depending on the study in question) (21). Moreover, rates of therapeutic response in patients deemed PD-L1 IHC “negative” have not been insignificant (3–20%)—especially given that responses to second line palliative docetaxel have historically been on the order of ≤10% and with far greater toxicity than seen with immune checkpoint inhibitors (21). To date, only pembrolizumab has acquired an FDA-approved companion diagnostic, the PD-L1 IHC 22C3 pharmDx assay (Dako North America, Inc.). Further, it is the only one of the immune checkpoint inhibitors that has been FDA approved in advanced NSCLC for use selectively in patients with PD-L1 positive tumors—though thresholds for PD-L1 tumor proportion score (TPS) “positivity” are defined differently in the first line (PD-L1 TPS ≥50%) vs. second line (PD-L1 TPS ≥1%) settings. 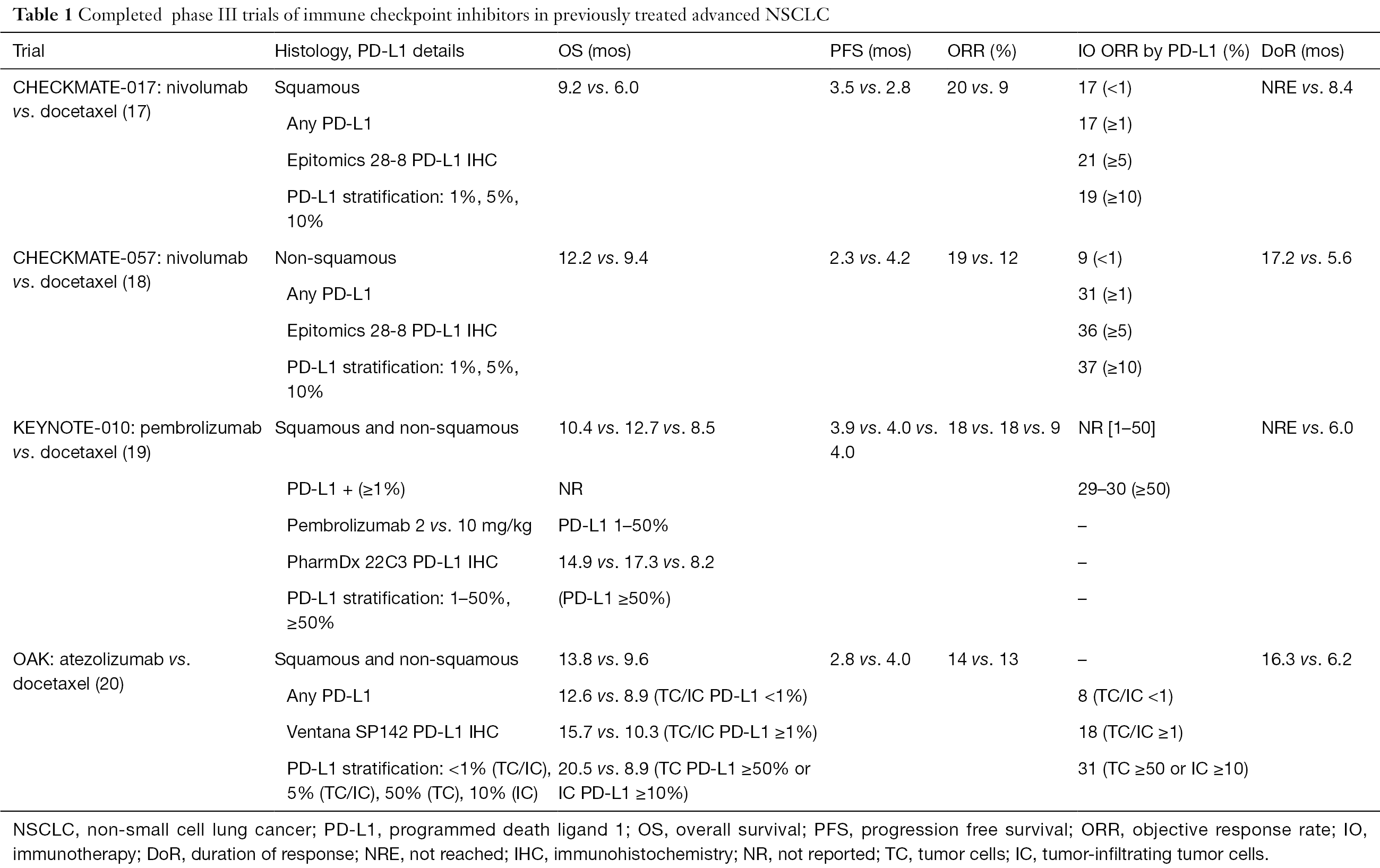 It is amidst this burgeoning landscape that Reck and colleagues published KEYNOTE-024, a phase III randomized study of first line pembrolizumab vs. platinum doublet for previously untreated, PD-L1 positive (TPS ≥50%) stage IV NSCLC (22). In this study, 305 patients were randomly assigned to either pembrolizumab administered IV at a flat dose of 200 mg every 3 weeks for 35 weeks or platinum doublet (carboplatin/pemetrexed, cisplatin/pemetrexed, carboplatin/gemcitabine, cisplatin/gemcitabine, or carboplatin/paclitaxel at the investigator’s discretion) given IV every 3 weeks for four to six cycles. The most common regimen for the group randomized to conventional chemotherapy was pemetrexed (44.4%), more than half of whom went on to receive pemetrexed maintenance. The majority of patients were male, current/former tobacco users, and with nonsquamous histology. Tumor PD-L1 IHC was assessed using the FDA-approved companion diagnostic (pharmDx 22C3) and was performed on core/excisional biopsies obtained at the time that metastatic disease was diagnosed; fine needle aspirates or archival specimens obtained from sites treated with any intervening radiation therapy or chemotherapy were not permitted. Of 1,653 patients whose samples were evaluable for PD-L1, 30.2% had a PD-L1 TPS of ≥50%, thus meeting the threshold for positivity for entry into the trial.

The toxicity profile noted with pembrolizumab was consistent with previous reports of PD-1/PD-L1 antibodies and favorable as compared with chemotherapy: grade 3–5 treatment-related adverse events (AEs) were 26.6% vs. 53.3%, respectively. The most common treatment-related AEs in the pembrolizumab group were diarrhea (14.3%), fatigue (10.4%), and pyrexia (10.4%). Immune-mediated AEs were noted in 29.2% of patients receiving pembrolizumab; however, grade 3–4 immune-related AEs occurred infrequently and included: severe skin reactions (3.9%), pneumonitis (2.6%), and colitis (1.3%).

Notably, preliminary results have also recently been reported for CheckMate-026, a phase III study of nivolumab vs. platinum doublet chemotherapy in patients with previously untreated, PD-L1 positive (defined as present in ≥1% of tumor cells) advanced NSCLC (23). A total of 541 patients were randomized in a 1:1 fashion to receive weight-based nivolumab 3 mg/kg IV every 3 weeks or investigator’s choice of platinum doublet chemotherapy (same as in KEYNOTE-024) IV every 3 weeks for up to six cycles. Patients progressing on chemotherapy were allowed to crossover to nivolumab. OS was 14.4 vs. 15.2 months for nivolumab vs. chemotherapy (HR 1.02). The primary endpoint of improved PFS in patients whose tumors were “strongly” PD-L1 positive (i.e., PD-L1 ≥5% by IHC) was not met. No new safety signals were observed with nivolumab, and serious AEs were seen in 18% vs. 51% of patients receiving nivolumab vs. chemotherapy, respectively.

The conflicting outcomes of these two rigorously conducted phase III studies of frontline immunotherapy in advanced NSCLC have raised important questions regarding optimal patient selection and perpetuate the controversies pertaining to PD-L1 as a predictive biomarker. To date, there have been no head to head comparisons of the various PD-1 or PD-L1 targeting agents, though we have generally considered that they are equally efficacious. Though PD-L1 positivity has in numerous studies now been associated with improved response rates and survival outcomes, multiple questions persist. Were different thresholds for defining PD-L1 “positivity” (i.e., TPS ≥50% in KEYNOTE-024 vs. ≥1% in CheckMate-026) enough to explain these divergent outcomes? How much PD-L1 is “enough”? What is the optimal method for assessing PD-L1 status—tumor cells, tumor-infiltrating immune cells, both? What is the optimal platform for PD-L1 testing? How should the existing platforms best be harmonized? Addressing the latter issue has become an important priority as this therapeutic domain has evolved. Initial results from the Blueprint PD-L1 IHC Assay Comparison Project suggest that 3 of the 4 most commonly utilized PD-L1 IHC assays in the key trials of immune checkpoint inhibitors in NSCLC to date [22C3 (pembrolizumab), 28-8 (nivolumab), and SP263 PD-L1 IHC as opposed to the SP142 assay (atezolizumab)] demonstrate PD-L1 expression to a similar degree, though interchanging assays and cut-offs may still lead to “misclassification” of PD-L1 status in some cases (24).

In sum, the experience of immune checkpoint inhibitors in the care of patients with advanced NSCLC has given credence to some recurring themes: (I) ORRs are generally in the 10–30% range, regardless of PD-L1 status (though patients whose specimens express higher PD-L1 may experience a greater likelihood of response and long-term outcomes); (II) in those patients achieving a response, the response is often durable (i.e., lasting many months and often superseding the more limited DoR seen with conventional chemotherapy); and (III) toxicity profiles with the immunotherapeutic agents are generally less severe than those historically seen with conventional chemotherapy—though the identification and management of immune-mediated AEs requires heightened awareness on the part of patients and providers alike to permit early intervention.

In the second line setting and beyond, conventional chemotherapy has proven inferior to immune checkpoint inhibitors both with regards to outcomes and toxicity—regardless of PD-L1 status and other patient selection factors—in patients who are otherwise deemed fit to continue with cancer-directed therapy. This reflects the hugely unsatisfying outcomes for patients with this difficult disease and the heretofore modest options available to patients whose disease has progressed on first line platinum-based therapy. With the approval of EGFR-(~10–15%), ALK- (~3–5%), and ROS1- (~1–2%) targeting TKIs and pembrolizumab (~30%) in defined subsets of patients, some 50% of patients with advanced NSCLC will now have an option for a frontline, tumor-specific systemic palliative therapy (25). Additional needed exploration is ongoing to see if combining immunotherapies (either with themselves or concurrently/sequentially with chemotherapy) will allow us to further improve outcomes for the vast majority of patients whose tumors lack an actionable biomarker. Decades after platinum-based therapy established itself as the standard of care, these tumor-specific therapies finally offer our patients a more efficacious, durable, and less toxic approach to care for their dire disease.