Interleukin-6 (IL-6) is a pleiotropic cytokine with a wide range of biological actions including immune function, metabolism, hematopoiesis, and oncogenesis (1,2). IL-6 can have both pro and anti-inflammatory functions depending on the condition. Initially, IL-6 was believed to be pro-inflammatory because several inflammatory-based disorders such as infection, diabetes and obesity commonly show an increase in circulating IL-6 (3-5). In contrast, transient expression of IL-6 after exercise can have anti-inflammatory and insulin sensitizing effects (3,6,7). Despite its enigmatic biology, IL-6 has been heavily investigated for its role in the progression of cancer and cancer-associated cachexia (8). The recent publication from Flint et al. (9) adds supporting evidence that IL-6 regulates these processes through direct and indirect targeting of multiple systems leading to alterations in metabolism and endocrine function.

The IL-6 family signals through the membrane bound receptor gp130 (glycoprotein 130) (6). Upon binding, the gp130 receptor activates JAK (Janus Kinase) tyrosine kinase (6). Activation of JAK-1 leads to phosphorylation of tyrosines in the cytoplasmic domain of gp130, which enables binding for proteins with Src homology domain-2 (SH2) and phosphotyrosine-binding proteins (10). Among these proteins are the STATs, which are critical for IL-6 signaling (10,11). STAT proteins are activated by phosphorylation on a single tyrosine residue leading to the formation of STAT dimmers (10,11). The STAT dimmers can then translocate to the nucleus where they function with other factors to increase the transcription of genes containing STAT-responsive elements in their promoters (10,11). IL-6 can activate both STAT-1 and STAT-3, however, STAT-3 has been shown to have a more pronounced role in the IL-6 signaling pathway (10). STAT-3 transcriptional targets are involved in multiple cellular functions including immune function, cell proliferation and growth, differentiation and possibly apoptosis (12,13). The gp130 receptor is found in most tissues throughout the body enabling potent and diverse effects of IL-6 especially during heightened expression conditions including cancer and cancer-associated cachexia.

Although strong evidence supports the deleterious role of IL-6 during cachexia, IL-6 treatment in non-tumor bearing rodents creates difficulty in determining a mechanism for IL-6 in muscle wasting. Some reports claim a direct role for IL-6 to regulate wasting. Transgenic mice over-expressing circulating IL-6 show muscle atrophy associated with increased expression of lysosomal and ubiquitin-related mRNA and proteins (14,15). In humans, IL-6 administration caused a reduction in skeletal muscle protein synthesis and an increased uptake by non-muscle tissues, a condition similar to what is observed in cachexia (16). In cell culture, C2C12 myotubes treated with IL-6 have increased lysosomal and ubiquitin-related proteins and enzymatic activity (17). In contrast to these findings, IL-6 administration in rats failed to activate muscle protein breakdown (18). IL-6 treatment to L6 myotubes was also unable to increase protein degradation (19). Together, it remains unclear whether IL-6 can directly alter skeletal muscle protein turnover under disease-free conditions but its potency to induce wasting is far greater in tumor bearing conditions. Thus, understanding the interaction(s) of IL-6 action in the context of cancer is certainly warranted.

IL-6 has a well-established association with the onset of cachexia in both rodent and human wasting conditions (8). In the ApcMin/+ mouse, a model of colorectal cancer and IL-6-dependent cachexia, over-expression of IL-6 can accelerate the loss of muscle and fat along with increased tumor number (20). Furthermore, IL-6 levels corresponded with the extent of muscle wasting, suppression of protein synthesis and elevated protein degradation (21). Deletion of the IL-6 gene prevented the development of cachexia in ApcMin/+ mice despite the existence of intestinal polyps (20). Attempts have been made to manipulate the systemic actions of IL-6 and other pro-inflammatory cytokines during cancer cachexia. The use of IL-6 receptor antibody has shown to be effective against muscle wasting in tumor bearing mice. Inhibition of IL-6 activity through an IL-6 receptor antibody prevented muscle wasting in C-26 tumor bearing mice (22,23) yet had no effect on tumor size. However, questions still remain as to what secondary mechanisms were active/inactive during the induction and suppress of IL-6 as it related to the progression of cachexia.

IL-6 is associated with a pro inflammatory immune response during infection and injury. The recent report by Flint et al. (9) suggests a role of IL-6 to drive glucocorticoid secretion which, in turn suppresses tumor immunity. Although glucocorticoids are commonly used to suppress inflammation in diseases such as rheumatoid arthritis and Duchene’s muscular dystrophy, elevated glucocorticoids in the presents of cancer could suppress host immunity and slow or prevent anti-cancer defenses. In fact, the extent of immune cell infiltration, especially T cells, in cancer patients predicts survival and chemotherapy outcomes (24). Based on these findings, glucocorticoid levels should be considered and perhaps targeted in conjunction with immunotherapy interventions.

Regardless of physiological condition, a chronic state of hypermetabolism coupled with a propensity for caloric deficiency will promote eventual wasting. In terms of anorexia, cancer cachexia is often but not always linked with a reduction in caloric intake. Intriguingly, cachexia cannot be corrected through nutritional supplementation. The numerous mouse models of cachexia tend to vary in extent of anorexia (25). Human data appears more consistent in supporting a major role for anorexia in the loss of body mass (26,27). Although mechanisms are starting to be elucidated, pro inflammatory cytokines are still thought to be key mediators in the induction of anorexia during disease states (28,29). IL-6 has been shown to regulate food intake and metabolism (30), signaling through neural gp130 receptors (31). Even in non-cancer related cachexia, plasma IL-6 is associated with the incidence of anorexia (32).

The hypermetabolic state observed with cancer comes from several factors. One such mechanism is the increase in thermogenesis, as we know cancer increases the “browning” of white adipose tissue (26). Brown adipose cells use uncoupled respiration, burning glucose and lipid to generate heat instead of ATP. Activation of these cells increases whole body energy expenditure and are a pharmacological target for weight loss with obesity (33). However, in the context of cancer, activation of these cells could be detrimental. Although tumor-derived “browning” factors are starting to be identified (34), IL-6 is once again a driving mechanism to brown adipose tissue during cancer (26). Blocking inflammation or inhibition of β adrenergic signaling will attenuate cachexia progression (26) validating the hypermetabolic condition as a true contributor of wasting.

Hepatic dysfunction is common across various cancers. Flint et al. (9) provides evidence for IL-6-induced liver dysfunction being a transitional stage into the onset of cachexia. In the ApcMin/+ mouse model, cachexia progression is associated with increased hepatic STAT signaling, apoptosis and ER stress (35). Administration of the anti-inflammatory compound pyrrolidine dithiocarbamate (PDTC) for just 2 weeks attenuated the loss of liver lipid and glycogen stores which was associated with the attenuation of cachexia progression (36). Flint et al. (26) linked IL-6 with the reduction in liver PPAR alpha mRNA expression and the suppression of ketogenesis during cancer-associated caloric deficiency. This leads to the production of glucocorticoids, which appears to be a key mediator in the transition into cachexia, thus linking metabolic dysfunction to hormonal alterations.

Increased glucocorticoid secretion will induce muscle atrophy through direct mechanisms including suppression of amino acid import (37), suppression of IGF-1 signaling and increasing myostatin signaling (38). Beyond the direct effects of glucocorticoids, indirect effects on hormonal regulation can contribute to muscle wasting as well. Disruptions in key anabolic hormones such as IGF-1 and testosterone have been reported during cachexia in both human (39,40) and mouse models of cachexia (41,42). The induction of glucocorticoids could be an underlying mechanism for the onset of hypogonadism as cortisol or pharmacological derivatives can directly suppress the production of testosterone (43) by inhibiting leydig cell function (44). Hypogonadism leads to muscle wasting and reduction in functional strength with (39,40) or without (45,46) an underlying disease. Several human diseases associated with a loss of lean body mass such as diabetes (47), chronic obstructive pulmonary disorder (COPD) (48), HIV-AIDs (49) and cancer (50) have reported a reduction in circulating testosterone in patients. Due to the anabolic properties of testosterone and its pharmacological derivatives, a strong research focus has been given to maintain anabolic hormones during catabolic conditions (51-53). Furthermore, testosterone and other anabolic steroids have shown to be effective in rescuing the loss of muscle mass in wasting conditions (54). In relation to IL-6, hypogonadism in healthy older men was associated with increased levels of circulating IL-6 while testosterone replacement returned IL-6 levels back to baseline (55). In the mouse, IL-6 over-expression does not directly suppress testosterone in pre cachectic mice while IL-6 inhibition through a IL-6 receptor antibody attenuated the drop in testosterone observed in cachectic mice (41). Together, glucocordicoid-induced suppression of testosterone could be another indirect mechanism promoting the induction of cachexia.

Chronic IL-6 over-expression with cancer appears to be a catalyst for multi-system dysfunction leading to accelerated tumor growth and cachexia progression (Summarized in Figure 1). The tumor and corresponding immune activation increase circulating IL-6 which starts the chain reaction. Tissues become insulin resistant caused in part by hyperlipidemia from excessive adipose lypolysis and metabolic dysfunction in skeletal muscle. This puts pressure on the liver to generate ketone bodies to provide fuel for vital tissues including the brain and heart. At the same time, IL-6 can induce a state of hypermetabolism from browning of white adipose tissue adding more pressure to ensure adequate ketone production. As the liver typically generates ketones during low energy/insulin resistance, high IL-6 levels suppress hepatic ketone production by inhibiting PPAR alpha causing a metabolic strain. As IL-6 can also promote anorexia, caloric deficiency in a background of hypermetabolism will only exacerbate the metabolic strain and cause secretion of glucocorticoids from the adrenals. The continuation of caloric deficiency and increased glucocorticoid levels accelerates the progression of cachexia through suppression of anabolic steroids, direct atrophic signaling in skeletal muscle and systemic insulin resistance. Furthermore, elevated glucocorticoids suppress immune function leaving a limited capacity for the host to slow further tumor progression. In addition, glucocorticoids will suppress commonly used anti-cancer immunotherapy. As suggested by Flint et al., IL-6 and glucocorticoid levels should be considered before initiating a treatment plan for cancer patients to maximize efficacy. 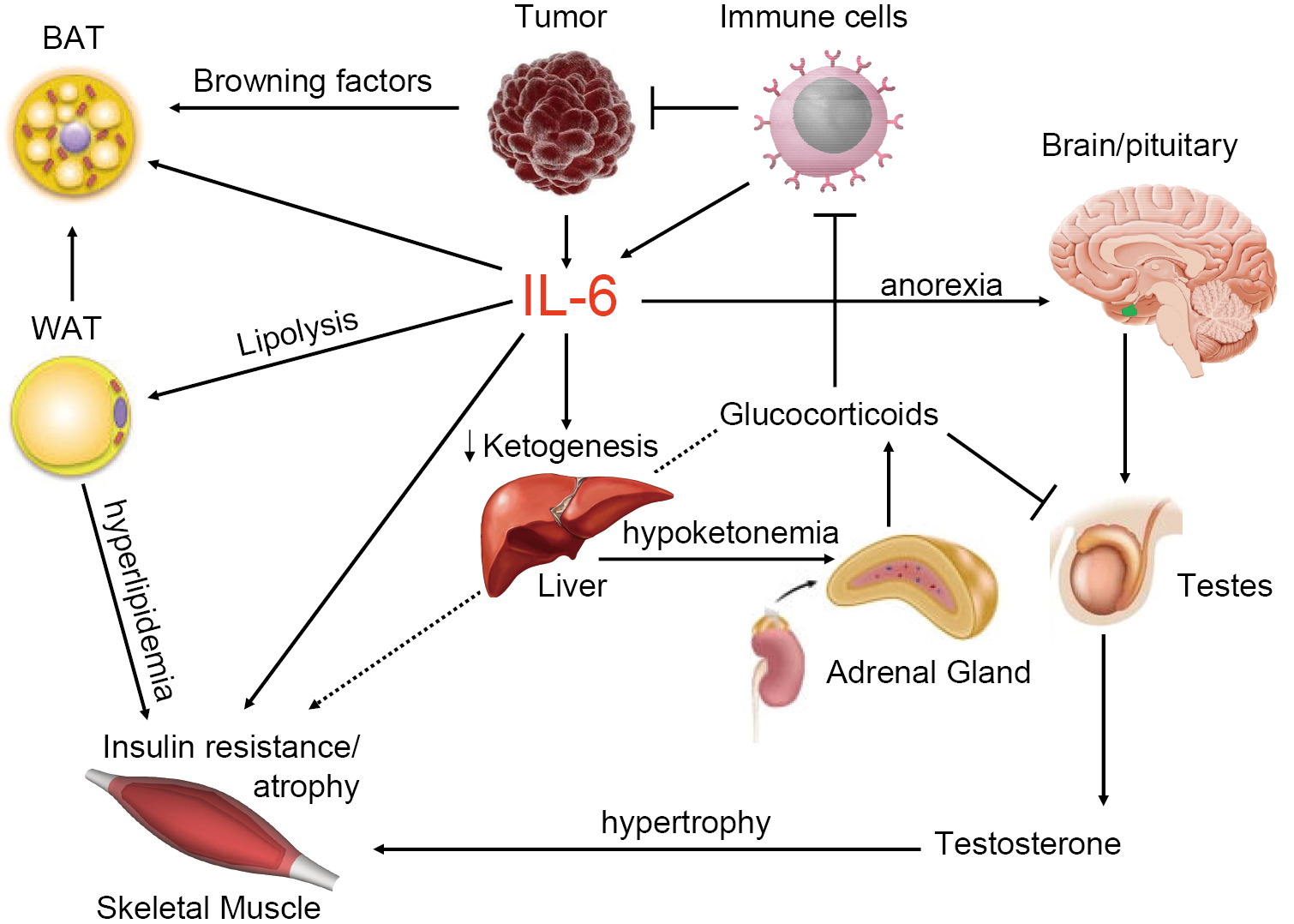 Figure 1 Direct and indirect targets of IL-6 driving tumor burden and cachexia progression. Both tumor and immune-derived IL-6 secretion is a focal point for numerous cancer-associated pathologies. Metabolic stress in skeletal muscle, adipose tissue and liver start before the onset of cachexia. When these processes are coupled with caloric deficit, glucocorticoids secretion increases and accelerates the progression of cachexia and tumor growth through various mechanisms. IL-6, interleukin-6.

J.P.W. was supported by the NIA Pepper Center grant AG028716 and start up funds from Duke University.