Herpes simplex encephalitis (HSE) is the most common cause of sporadic fatal encephalitis in humans (1). It may occur as a consequence of both primary as well as recurrent HSV infections and results in focal necrosis of the frontal and/or temporal lobes of the brain (2). Most HSV encephalitis is due to HSV-1, but about 10% is caused by HSV-2 (3). About 90% of normal people are seropositive for HSV-1 indicating past exposure to the virus, a finding that is consistent with the presence of latent HSV-1 genomes in the trigeminal ganglia of 85–90% of people at unselected necropsy (4). While the neuropathogenesis of HSE remains poorly understood, it has been hypothesized that an immunosuppressive state is thought to contribute to reactivation of latent HSV. Chemotherapy, radiotherapy (RT), and steroid therapy are known to elevate the incidence of HSE by decreasing cell-mediated immunity.

Only sporadic case reports of HSE following brain irradiation exist; they have been observed in sporadic clinical contests after brain irradiation in metastatic or primary brain cancer patients, most of them receiving chemotherapy or steroid therapy (4-9). However, from our knowledge, few HSE case following head and neck irradiation for nasopharyngeal carcinoma (NPC) was reported before. Here we show a patient with stage III NPC who underwent head and neck irradiation and subsequently developed a presentation of HSE.

A 37-year-old woman was referred to our institution for evaluation and management of NPC after touching a neck lump for 7-month and receiving a nasopharyngeal biopsy results with a pathologic diagnosis of non-keratinizing poorly differentiated carcinoma. Physical examination detected that bilateral cervical lymph nodes enlargement. She underwent a MRI examination for evaluation and staging of NPC, and then the MRI demonstrated the primary tumor involvement of nasopharynx and parapharyngeal space, with bilateral metastasis in cervical lymph nodes. Thus, the patient was staged on stage III (according to 2012 UICC) and received concurrent chemoradiotherapy treatment. RT was planned to deliver a total dose of 6,976 cGy (218 cGy ×32 fractions, 5 Fr/week) to the planning target volumes of primary tumor plus any node disease by using a simultaneous-integrated intensity modulated radiation therapy (IMRT) boost technique. For concurrent chemotherapy, the patient was planned to receive cisplatin 80 mg/m2 i.v. on days 1, 22, and 43 during IMRT. In order to prevent side effect induced by chemotherapy, the dexamethasone was commonly prescribed before chemotherapy.

During the treatment period, grade II and III granulocytopenia was found and treated with receiving Granulocyte colony-stimulating factor (G-CSF). There were no complications of herpes labialis, oral ulcer and diarrhea during treatment. After 27 of the planned 32 RT sessions (total dose: 58.86 Gy), she felt tired and developed low grade fever (37.6–38.2 °C) without significant abnormality of blood routine, C reactive protein (CRP), renal function test, liver function test, fasting blood glucose, lipid profile test, sputum routine and sputum culture test. The RT was paused. After 6 days later, she developed high grade fever (39.2–40.2 °C) with chills and nausea. CT of the head was negative. Meanwhile, the routine test and biochemistry indicators of CSF were normal. Although, at that moment, there was no significant abnormal feature on chest CT images, she was treated with tentative anti-inflammatory treatment. Over another 3 days, she became increasingly lethargic, unresponsive, and suffered several generalized tonic-clonic seizures. On ninth day, she underwent a MRI examination for evaluation of brain, the MRI demonstrated marked hyperintensities in the bilateral temporal lobe, insular cortex and frontal lobe in T2WI (Figure 1), and the MRI also demonstrated a marked response to the RT with almost 100% reduction of NPC tumor burden. HSE was highly suspected. At the same time, CSF herpes simplex virus-1 polymerase chain reaction was positive several days after the lumbar puncture. Then, high dose acyclovir therapy was immediately supplied continuously for 4 weeks. After anti-viral therapy, the patient only had residual dysarthria and mild word-finding difficulties but no other neurological deficits. 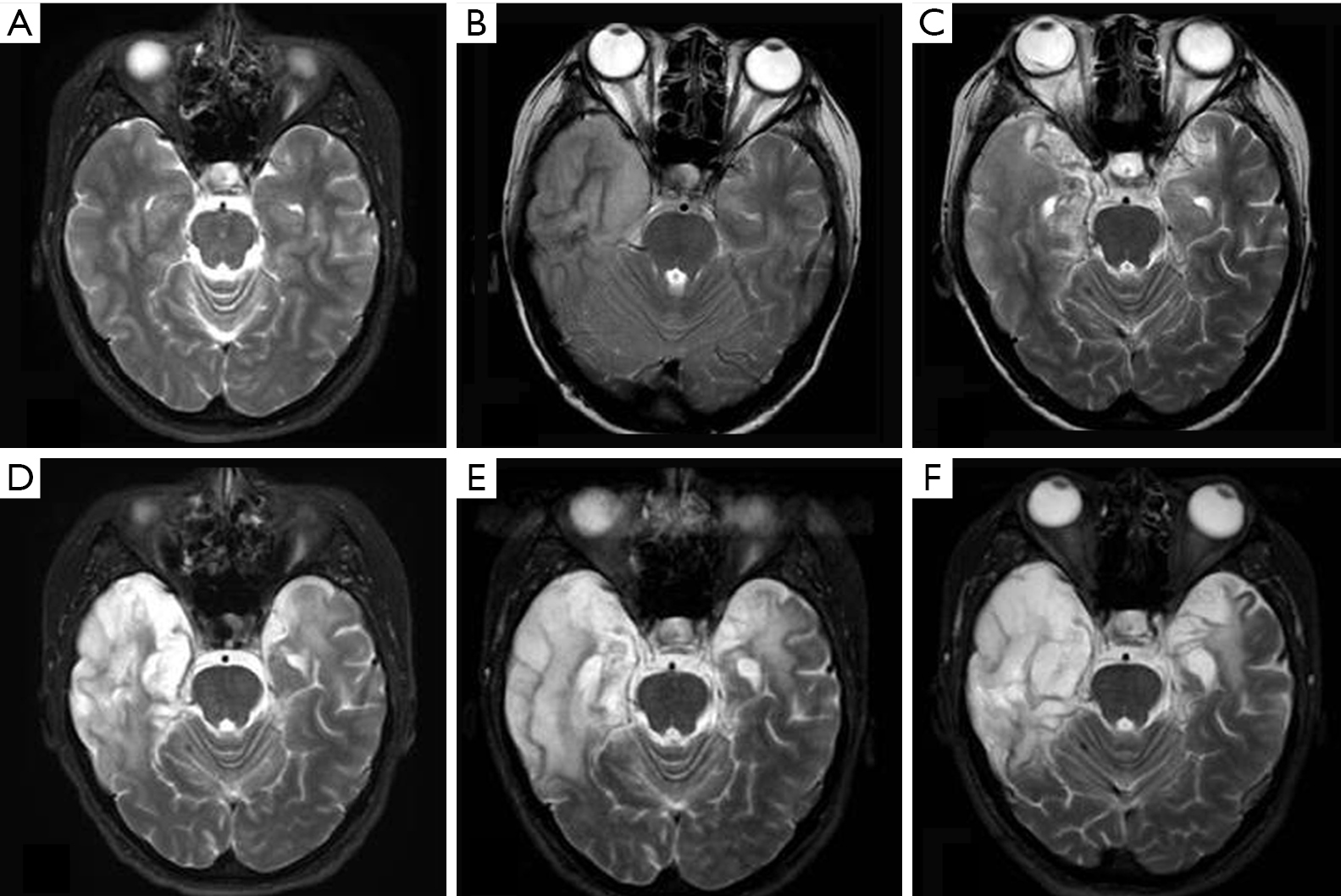 She underwent follow-up brain MRI examinations on 1-month, 3-month, 6-month, and 1-year after onset of symptom (Figure 1). The T2-weighted MRI demonstrated that (I) the hyperintensities in the bilateral temporal lobe, insular cortex and frontal lobe were becoming increasing obvious; (II) no sign of NPC recurrence was found.

HSE is a devastating disease with high mortality and disability rates despite adequate treatment and the most survivors have severe neurological impairment (10). Although, the mechanisms leading to increased susceptibility to HSE remain unclear, an immunosuppressive state was considered a risk factor in developing HSE. Chakraborty and colleagues assert that immunosuppression does in fact promote HSE, and this claim is supported by studies using immunocompromised mouse and human models (11). Cancer per se and related treatments such as chemotherapy, RT and corticosteroid assumption commonly predispose to an immunosuppressive condition (5). Till date, however, RT combined with chemotherapy remains the mainstay treatment of stage III NPC. For our patient, the primary NPC lesion was almost completely reduced after 27 of the planned 32 RT sessions, and there was no sign of recurrence on follow-up MRI for 1 year.

Brain RT may increase susceptibility to HSE, since brain RT may cause disruption of the blood-brain barrier and induction of a localized immunosuppressive state (7,12). In 2011, Graber and colleagues demonstrated that there was a higher incidence (1:250) of HSE in a cohort of cancer patients treated with prior WBRT and dexamethasone (n=997) at the Memorial Sloan Kettering compared to the general population (2–4:1 million) (13). There are at least 19 cases reports of HSE after brain RT in the literature (Table 1). In the reported patients, 11 patients had brain metastases and received whole brain RT (WBRT); 3 patients had glioma and received cranial RT; 2 patients had medulloblastoma and received cranial RT; 2 patients had small cell lung cancer and received prophylactic cranial irradiation (PCI); 1 patient had pituitary adenoma and received cranial RT. In addition, 15 cases occurred HSE after completing RT (form after RT 2 days to 2.5 months, from 30 to 64 Gy), and the other 4 cases occurred HSE during the process of radiation therapy (from 18 to 43.2 Gy). In these reports, the irradiation regions of patients were whole brain or regional brain for brain disease, the irradiated dosage was from about 18 to 64 Gy. In our case, the fields of radiation were primarily directed against the NPC primary tumor and bilateral neck nodes, rather than the whole brain or regional brain. However, the irradiation regions of the patients inevitably encompassed some part of skull base and inferior temporal lobes. As shown in Figure 2, skull base and small portions of bilateral temporal lobes were irradiated during NPC radiation therapy. The percentage of the organ volume receiving at least 30 Gy (V30), 40 Gy (V40) and 50 Gy (V50) for left temporal lobe were 21.25%, 10.41%, and 3.49%, for right temporal lobe were 12.00%, 4.91% and 0.25%, respectively. Although the total dose of temporal lobe was relatively low, NPC RT may also cause disruption of the blood-brain barrier, since the regional of skull base and inferior temporal lobes under relatively high irradiated dose. Laboratory findings from rat spinal cord models clearly demonstrated that an acute blood-brain barrier disruption after ionizing radiation leading to brain haemodynamic inflammatory changes causing parenchymal oedema (22). HSV may spread by direct extension from the olfactory mucosa and through the cribriform plate into the orbital frontal or medial temporal lobes, or travel to the brain along neuronal axons after reactivation in the trigeminal ganglia (7). 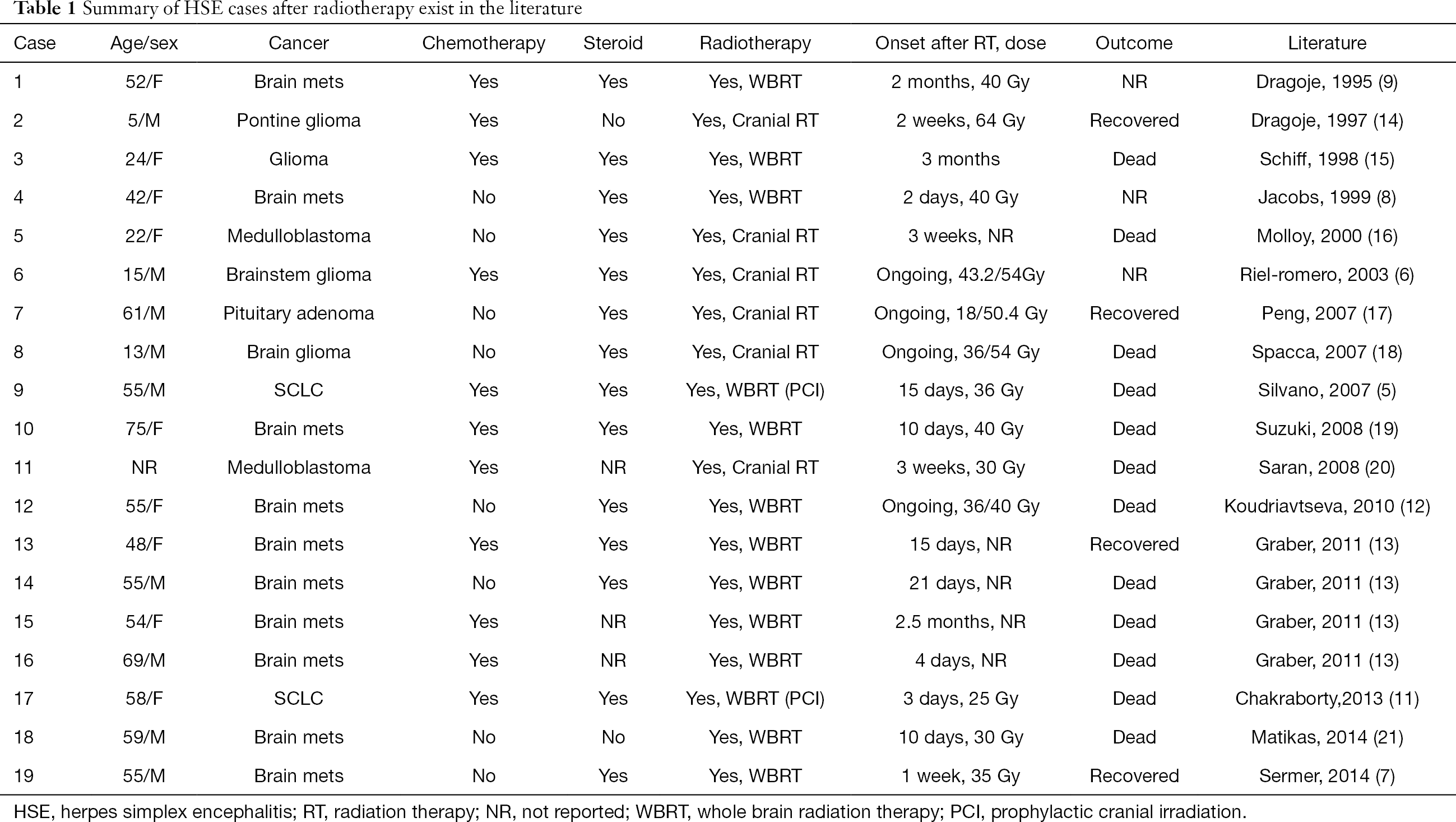 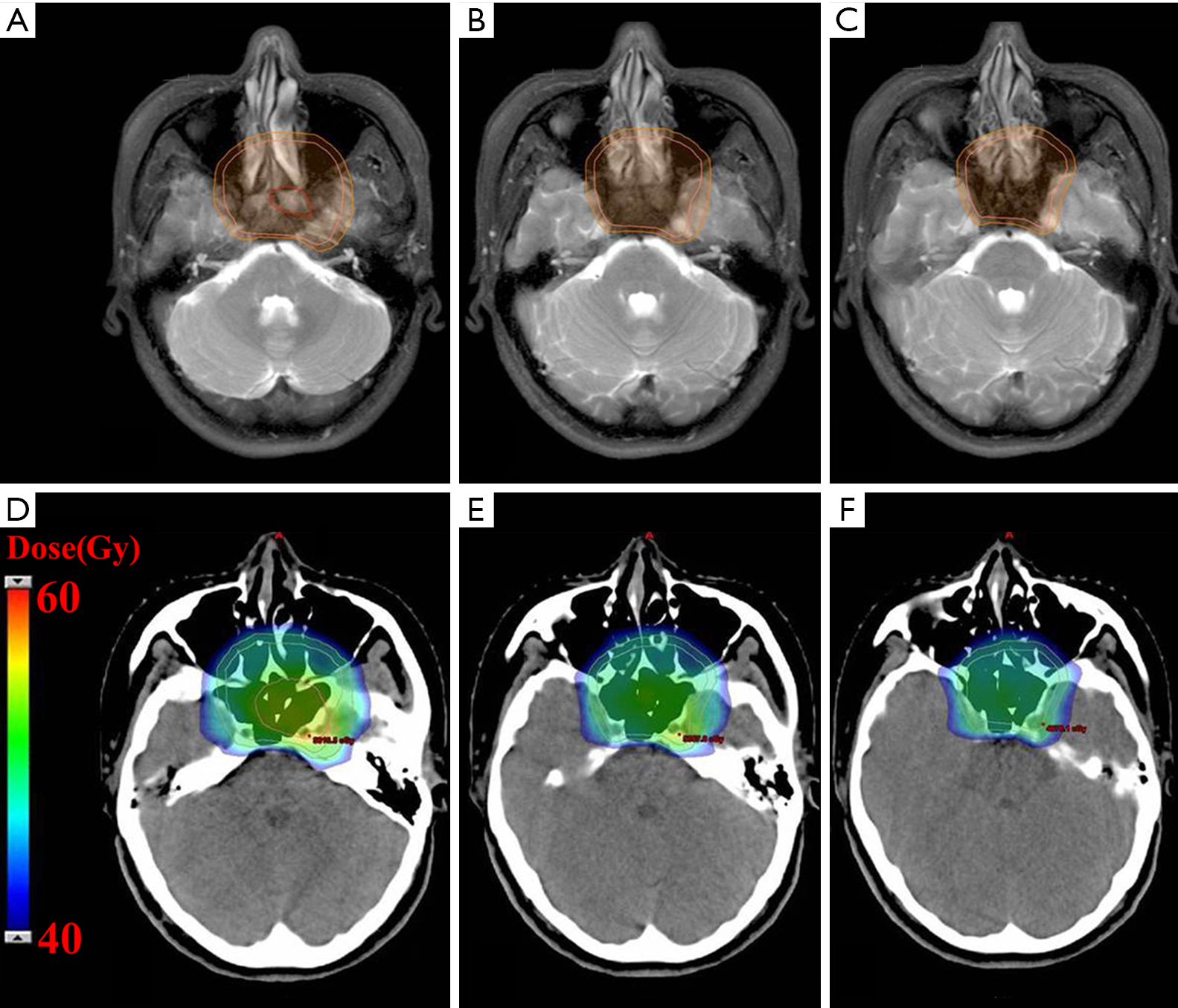 Early diagnosis of HSE is essential, as the prognosis is dependent on early treatment. Clinically, diagnosis of HSE is based on the clinical presentation, brain MRI and CSF analysis. The typical clinical manifestation of HSE is acute febrile illness with behavioral abnormalities, seizures, decreased level of consciousness and focal neurological signs (24,25). However, the early symptoms are various and not pathognomonic. Particularly, immunocompromised patients may have unusual presentations. Furthermore, the presentation of treatment related response could delay the consideration of HSE, as in our case. MRI is more sensitive than CT, especially in diffusion-weighted images or FLAIR images that can identify abnormal areas when conventional sequences are normal (19,26). Misra and colleagues reported that T2 and FLAIR sequences are more sensitive compared to DWI in patients with encephalitis undergoing MRI study after 48 h (27). Our initial MRI was scanned on nine days after onset of symptom, T2 images was more sensitive than DWI images. Unilateral temporal lobe involvement is the classic finding seen on imaging, as in our case. For our case, the initial MRI was meaningful for diagnosis of HSE. In addition, the follow-up MRIs were vital of importance for monitor the prognosis of HSE. From our follow-up MRIs, the atrophy of bilateral temporal lobe, insular cortex and frontal lobe was found. This phenomenon means that, to some extent, the brain damage induced by HSE could not be repaired. CSF PCR, which has a sensitivity of 98% and specificity of 94–100%, is considered the gold standard for diagnosis (7). Early diagnosis and treatment remains the major prognostic indicator. Empiric antiviral therapy with acyclovir should be initiated at the time the diagnosis is suspected, since any delay in antiviral therapy is associated with a less favorable outcome (7). However, Stranska and colleagues (28) reported that the incidence of acyclovir resistance is estimated to be 0.5% in immunocompetent individuals but may be up to 14% in immunocompromised individuals. Therefore, the acyclovir resistance may increase the mortality of HSE. As shown in Table 1, in these reports, after antiviral therapy 4 of 19 cases were recovered, 12 cases were dead, and the other 3 cases were unknown.

In conclusion, we present the case of a patient with NPC who developed HSE during receiving head and neck irradiation and we briefly show the available HSE cases after RT in available literature. Our case contributes to a growing body of literature of HSE cases after RT. In addition, this case suggests that RT might play a role in disruption of blood-brain barrier and induction of localized immunosuppressive state, and emphasizes the importance of considering HSE during or after RT, especially if chemotherapy and steroids are used concomitantly. However, the exact mechanisms leading to increased susceptibility to HSE remain unclear.