Esophageal squamous cell carcinoma (ESCC) is the eighth most frequent cancer and the sixth most common cause of cancer-related deaths due to its poor prognosis. The important stages in ESCC progression include tumor invasion (T), involvement of lymph nodes (N), and distant metastasis (M) (2). Metastasis is the key step that allows the cancer cells to settle in distant organs, and account for 90% of mortality from cancer (3). Therefore, understanding the mechanisms involved in metastasis of ESCC may shed the light on potential therapeutic options. In order to expand in growth at both primary and secondary sites, tumor cells require neovascularization and angiogenesis to provide blood supply for the rapid cellular replication and therefore recruit growth factors like VEGF and bFGF to the newly forming blood vessels (4). Id1 (inhibitor of differentiation 1) belongs to a family of helix-loop-helix (bHLH) transcription factors that are found elevated in multiple carcinomas. Id1 protein regulates differentiation and cell-cycle progression, which are important in carcinogenesis and cancer metastasis. Id1 and Id3 knockout mice show deficient neural and vascular differentiation, reduced size, and less angiogenesis in tumor xenografts, suggesting that Id proteins are required for angiogenesis and vascularization to assist tumor growth and progression (5). Correlation study of 84 ESCC patients revealed an increased level of nuclear Id1 protein at M1 compared to M0 stage, and that the high level of nuclear Id1 could predict development of distant metastasis in the studied ESCC patients within 1 year of esophagectomy (6). Id1 was reported to mediate PI3K/AKT signaling leading to increased proliferation and survival of esophageal cancer cells (7), but the mechanism remained unclear. In an effort to find out the possible Id1 pathways, the authors performed in a previous study an antibody array against secreted growth factors from ESCC cells stably over-expressing Id1, and found increased levels of insulin-like growth factor-II (IGF2) induced by Id1—a potential autocrine effect that promotes ESCC growth and progression (8). A new role for Id1 was established; in addition to enhancing cell invasion and migration, Id1 regulates cancer cell secretion of IGF2 which promotes tumor metastasis in the tumor macro environment. Therefore, following up on their previous findings on autocrine effects of IGF2 in ESCC, in the 2017 Nature Communications report, Xu et al. (1) further investigated the potential paracrine effect of Id1-induced IGF2 in driving ESCC metastasis and progression.

In order to investigate the effects of Id1-induced IGF2 on VEGF-mediated tumor angiogenesis, the authors established tumor xenografts into mice from Id1 over-expressing ESCC cells with or without IGF2. They found Id1 over-expressing xenografts had higher microvessel density and serum VEGF that were reversed in the presence of shIGF2, suggesting Id1-increased angiogenesis was through secretion of IGF2. To study the potential paracrine effects of Id1-induced IGF2 on the surrounding stromal cells, specifically in fibroblasts, Xu et al. (1) isolated normal esophageal fibroblasts (NEFs) and analyzed their tendency to become myofibroblasts, which could enhance cancer cell proliferation. NEFs cultured in media from ESCC cells over-expressing Id1 showed increased expression of VEGF, secreted VEGF, and myofibroblast protein αSMA. However, in NEFs cultured in media from ESCC cells expressing shIGF2 or treated with IGF2 neutralizing antibody, there was no induction of VEGF or αSMA. Next the authors treated fibroblasts with IGF2 recombinant protein and found that αSMA and intracellular and secreted VEGF were increased in response to IGF2 protein in a dose-dependent manner. Cell migration potential was also evaluated in NEFs cultured in the various conditioned media. Results showed that cell migration was increased in fibroblasts cultured in media from ESCC cells that were over-expressing Id1 or treated with IGF2 recombinant protein, while cell migration was reduced in the media from cells treated with shIGF2 or IGF2 neutralizing antibody.

Although elevated IGF2 has been reported in solid tumors including ESCC, its effects on surrounding normal tissues and whether such effects are clinically relevant remain unclear. To answer these questions, the authors analyzed expression of IGF2 protein in tumor versus normal tissues adjacent to the tumors from 11 ESCC patients. They found elevated IGF2 protein in the tumor tissue compared to normal tissue in 90% of the studies cases. The IGF2 levels correlated positively with αSMA and VEGF expressions quantified from NEFs isolated from the same patients. The results suggested that in ESCC patients, tumor-secreted IGF2 may activate adjacent NEFs to differentiate into myofibroblasts. To find out the clinical relevance of the cancer-associated IGF2, the authors recorded patient survival and found an inverse correlation between serum IGF2 or VEGF levels and survival of ESCC patients. Patients who had low serum IGF2 or VEGF significantly outlived those who had high levels of either of these two cytokines.

Previous studies have shown that IGF2 binds to IGF-1 receptor (IGF-1R) and activates downstream signaling through RAS/MAPK or PI3K/Akt pathways in tumorigenesis (9). Inhibition of IGF-1R by a specific antibody has been shown to impede tumor growth in multiple cancer cells, and a number of clinical trials using IGF-1R inhibitors to treat solid tumors are currently being carried out (10-12). In order to dissect the molecular mechanism by which cancer cell-secreted IGF2 activates VEGF in stromal cells, the authors screened microRNAs that have complimentary bindings sites at the 3'UTR of VEGF and identified miR-29c and miR-127-5p as potential VEFG regulators. Both microRNAs down regulated VEGF proteins in a dose-dependent manner in NEFs. However, only miR-29c showed retarded downregulation of VEGF in response to IGF2 treatment, suggesting that miR-29c regulation of VEGF is mediated by IGF2. Luciferase assays confirmed binding of miR-29c to VEGF 3'UTR.

Interestingly, a positive correlation between p53 and miR-29c expressions was found in NEFs and a new binding site of p53 in the promoter region of miR-29c was identified. To further validate if IGF2 regulation of miR-29c and VEGF is dependent on p53, the authors assessed miR-29c and VEGF expression in mouse embryonic fibroblasts (MEFs) isolated from a p53 null mouse. Treating p53−/− MEFs with IGF2 recombinant protein did not change miR-29c or VEGF expressions.

Increased levels of VEGF receptor-1 (VEGFR1) was found in both the transplanted bone marrow and the lungs (often the first organ in ESCC metastasis) in mice bearing Id1 over-expressing ESCC xenografts as compared to mice bearing Id1-shIGF2 ESCC xenografts. VEGFR1+ bone marrow vascular progenitor cells were more migratory than VEGFR1− bone marrow cells and IGF2 protein increased migration in VEGFR1+ bone marrow cells, while VEGF antibody abolished the migration. These results provided the first evidence that tumor-secreted IGF2 increased VEGFR expression in bone marrow vascular progenitor cells which facilitated bone marrow to contribute to ESCC progression and metastasis to distant organs such as the lungs. Furthermore, treatment with a VEGFR1 neutralizing antibody significantly reduced tumor volumes in the primary xenografts as well as in the lungs, and the reduction in tumor volume was comparable to that in the Id1-shIGF2 group.

The authors also confirmed in vivo that the increased VEGF expression in the NEFs was caused by Id1-induced IGF2 by immunostaining of sections from Id1 over-expressing xenografts as compared to Id1-shIGF2 xenografts. Next they investigated whether IGF2-induced VEGF from NEFs could also activate bone marrow cells. Injections of NEFs pretreated with IGF2 significantly elevated VEGFR1+ cells in both the bone marrow and the lungs, causing increased tumor volume metastasized at the lungs. Conversely, the effects were abolished by VEGF antibody treatment, confirming that IGF2 also activates bone marrow through up-regulating VEGF in tumor adjacent NEFs. In addition, the authors showed evidence that bone marrow directly interacts with ESCC cells to promote tumor growth in the primary site of xenografts as well as the metastasis site in the lungs. They also showed early VEGF antibody treatment at the time when bone marrow was implanted could have a drastic effect in reducing tumor volume to an almost complete regression. Therefore, the authors provided strong evidence that cancer cell-secreted IGF2 exerted paracrine effects by directly stimulating surrounding NEFs in the tumor microenvironment to express VEGF and indirectly activating (via NEF-secreted VEGF) bone marrow cells in the tumor macro environment to migrate to the pre-metastasis niche in the lungs.

Another novel finding of this study is that CXCL5 protein was found increased in the lungs from mice bearing Id1-expressing ESCC xenografts. Additionally, CXCL5 protein increased invasion capacity of these ESCC cells. The invasion capacity was abolished by treating with CXCL5 or CXCR2 antibodies, similar to the effects observed in shIGF2 group. These findings indicated that CXCL5 played an important role in ESCC progression by promoting cell invasion at the metastasis organ, and an antibody therapy against CXCL5 or its receptor may reverse the invasion capacity of these metastasized cells.

Xu et al. (1) presented an interesting study with elegant design of experiments using proper controls. Collectively, this work has answered several important questions to elaborate the role of IGF2 in ESCC progression in the tumor micro- and macro environments (Figure 1). First, Id1 over-expressing ESCC secrete IGF2 that causes surrounding fibroblasts in the tumor microenvironment to acquire a myofibroblast phenotype, and to activate a p53-miR-29c-VEGF pathway. Second, VEGF is secreted from the IGF2-activated fibroblasts and travels via blood vessels to the bone marrow cells which acquire a VEGFR+ vascular progenitor phenotype. Third, CXCL5 elevated expression in the lung pre-metastatic niche attracts the VEGFR+ bone marrow cells to migrate and invade the lungs, causing progression of ESCC. 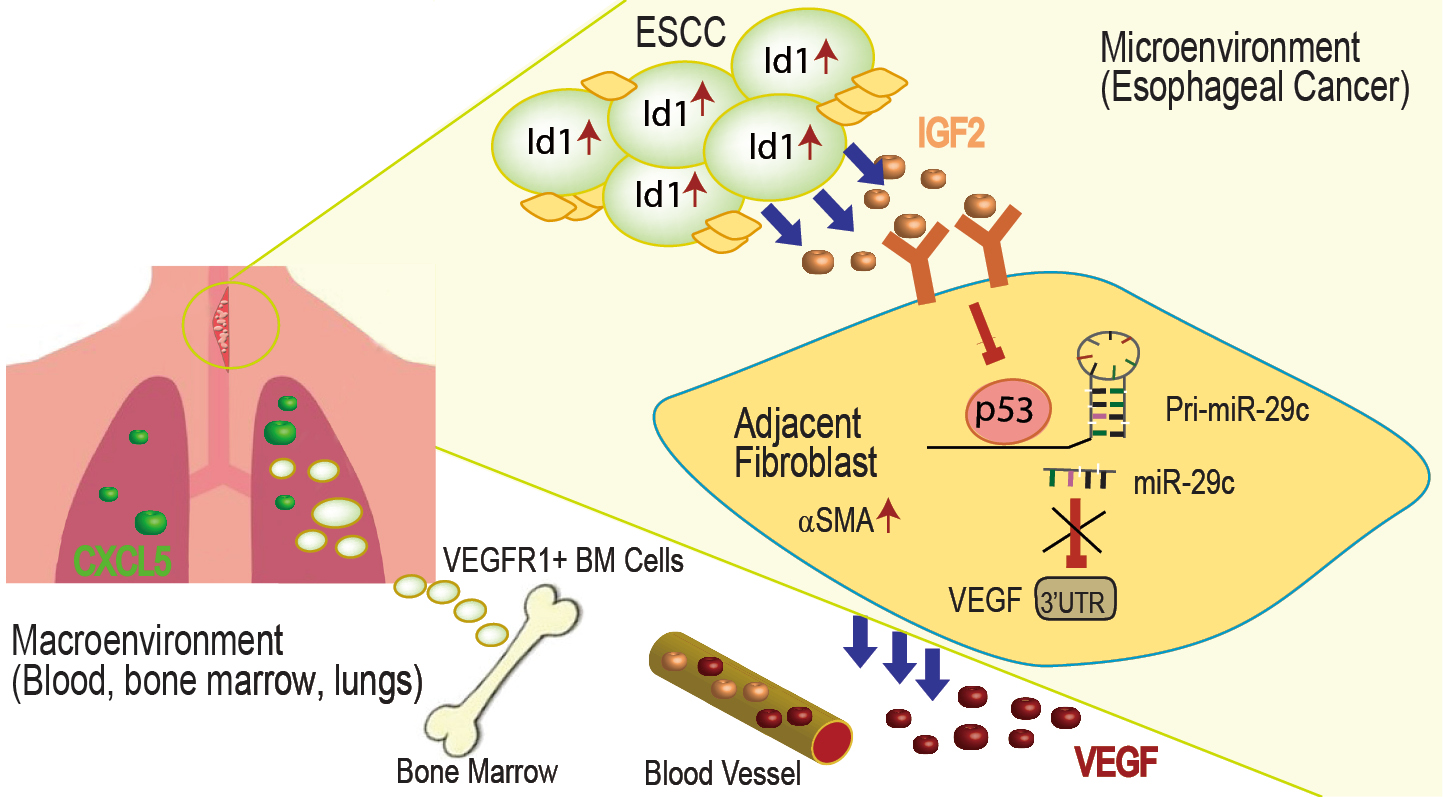 Figure 1 Schematic diagram summarizing the regulatory role of the Id1/IGF2/VEGF/VEGFR pathway in esophageal squamous cell carcinoma (ESCC) progression. In the tumor microenvironment, IGF2 secreted by Id1-expressing cancer cells activates adjacent fibroblasts to become αSMA+ myofibroblasts, and to reduce expression of p53 causing reduction in miR-29c expression and subsequent de-repression of VEGF. In the tumor macro environment, VEGF secreted from the activated fibroblasts travels through the blood to the bone marrow instigating VEGFR+ bone marrow cells to migrate to the lung where CXCL5 expression attracts the invading cancer cells.

The evidence against IGF2 as a pathological factor in multiple diseases including ESCC keeps accumulating. Identifying inhibitors for IGF2 such as miR-30e (15), IGF2-shRNA or IG2 neutralizing antibody as demonstrated by Xu et al. (1) is of immense translational benefit.

Funding: Dr. Lina Shehadeh is supported by grants from the National Institute of Health (R56HL132209) and the Miami Heart Research Institute. Ms. Wen Ding is a recipient of a Sublett AHA predoctoral fellowship (15PRE22450019).