Double-hit lymphoma (DHL) has been defined as high grade B cell lymphomas with MYC and Bcl-2 or Bcl-6 translocations according to the 2016 World Health Organization classification (1). DHL has been becoming the focus of intense investigation due to its intractable clinical behaviors and dismal prognoses. Most DHL cases possess concomitant translocations of MYC and Bcl-2 (58–87%), but few harbor MYC/Bcl-6 dual rearrangements (2-5). DHL patients tend to have a plurality of unfavorable prognostic parameters, including high tumor burden, elevated serum lactate dehydrogenase levels, advanced stage, high International Prognostic Index score, and extranodal involvement (6). The conventional immunochemotherapy regimen (rituximab, cyclophosphamide, doxorubicin, vincristine and prednisone) and aggressive therapeutic regimens (R-DA-EPOCH, R-Hyper CVAD and R-CODOX-M/IVAV) did not remarkably improve the patient outcomes, especially overall survival (OS), with median OS of no more than 2 years (7,8). A majority of patients succumb to refractory or relapsed diseases after a short remission.

The main characteristics of DHL are the translocations of MYC and Bcl-2, and their dysfunction has indeed been confirmed to contribute to malignant cell growth and pathogenesis in DHL (6,9,10). One of the alternative strategies is the combination treatment of two promising inhibitors of MYC and Bcl-2 for DHL patients (11,12). MYC directly regulates Aurora kinase A (Aurka), which in turn expedites MYC transcription by binding to its promoter, thus forming a feedback loop between MYC and Aurka (13,14). Aurka is a member of highly conserved serine/threonine Aurora kinase family, and participates in the regulation of multiple cell cycle aspects, particularly in the G2/M phase. Aurka is highly elevated in aggressive lymphomas, such as MYC-driven B-cell lymphomas and other types of lymphoma with high growth fractions, and it is also correlated with disease activity and prognosis (13,15,16). Alisertib (MLN8237), a highly specific second-generation Aurka inhibitor, has been demonstrated to have some encouraging preclinical activities and been underway in clinical trials for the treatment of several tumors (17). Bcl-2 regulates the intrinsic apoptosis pathway and therefore stimulates chemoresistance (18). Strategies that antagonize Bcl-2 function have been widely developed due to the emergence of a number of promising BH3 mimetics. ABT-199 (Venetoclax), a selective third-generation BH3 mimetic, has gained FDA approval as a monotherapy for chronic lymphocytic leukemia (19). Studies have reported the synergistic antitumor effects between ABT-199 and other agents, suggesting that the potential value of the combination therapy between ABT-199 and other novel inhibitors may be observed in some highly invasive tumors (20,21). Moreover, ABT-199 alone has also exerted preclinical efficacy in murine MYC-driven lymphoma models (22).

Herein, the purpose of this study was to evaluate the combination treatment of alisertib and ABT-199 in DHL cells. This was the first time to demonstrate that synergistic effects of Aurka inhibitors and Bcl-2 inhibitors, which was potentially therapeutic strategies for DHL lymphoma. 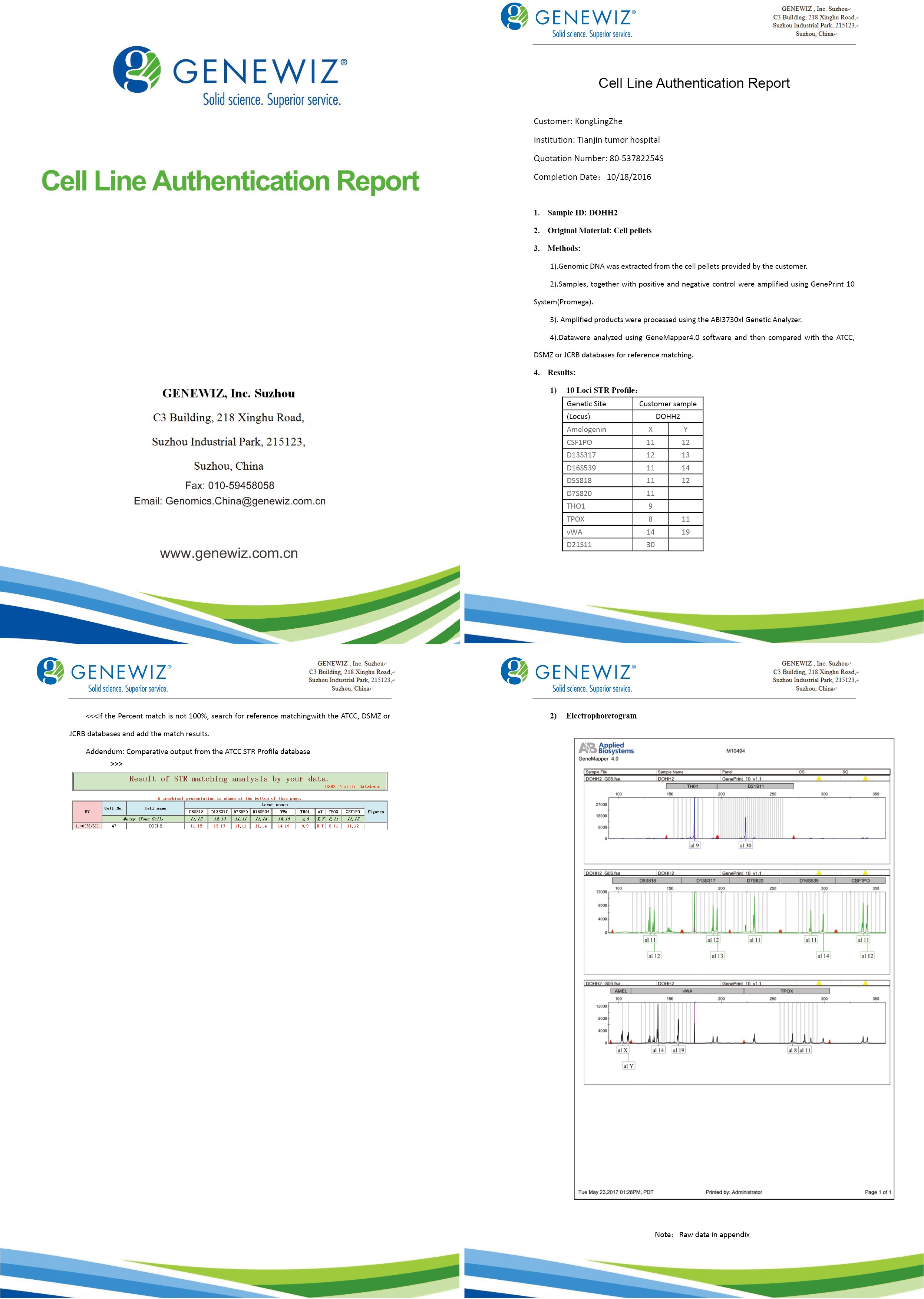 Figure S1 Validation of DOHH2 cell line identity by STR DNA finger printing. Genomic DNA was extracted from the cell pellets, then was amplified together with positive and negative control. Amplified products were processed using the ABI3730xl Genetic Analyzer. Data were analyzed using GeneMapper4.0 software and then compared with the DSMZ databases for reference matching. 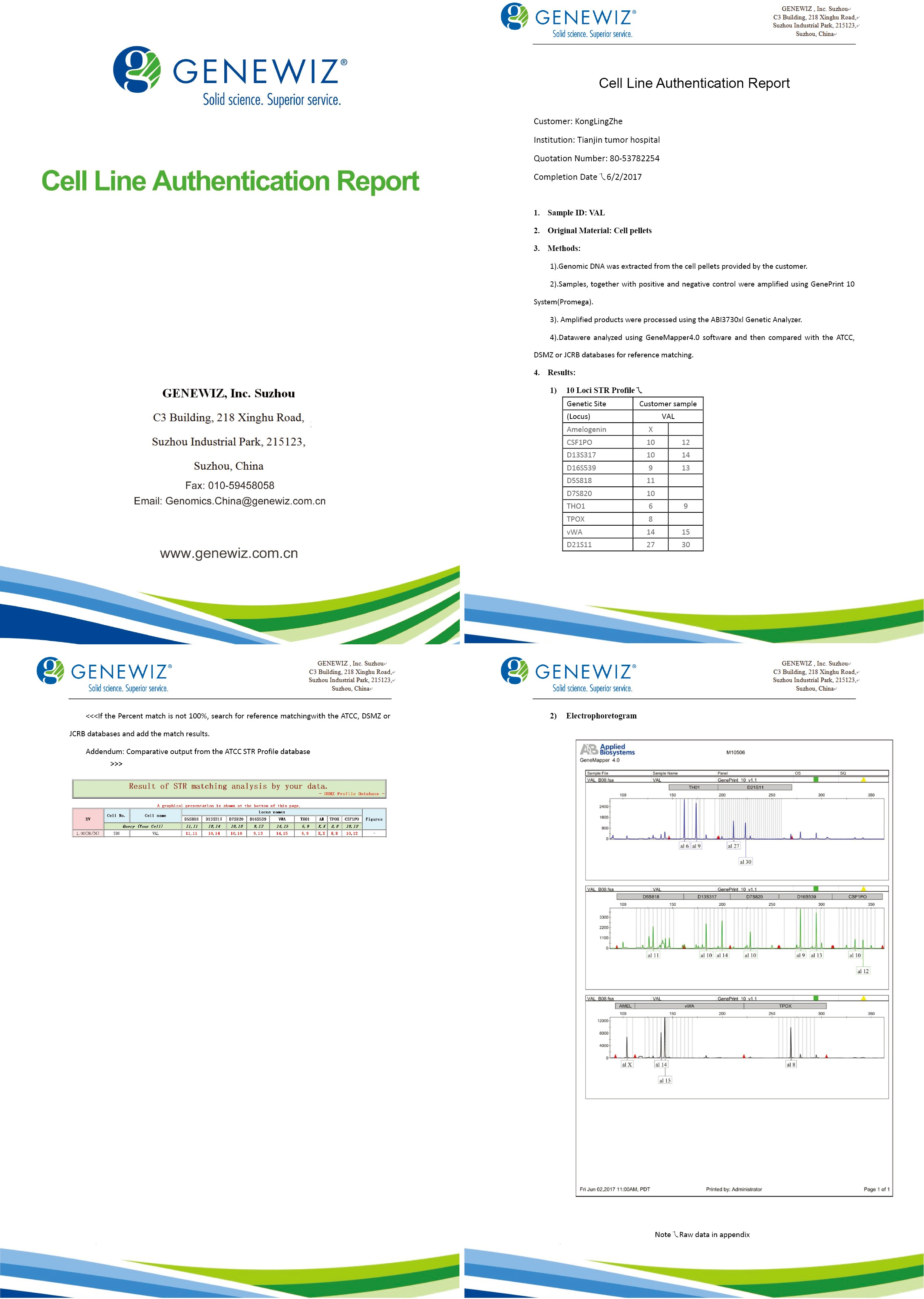 Figure S2 Validation of VAL cell line identity by STR DNA finger printing. Genomic DNA was extracted from the cell pellets, then was amplified together with positive and negative control. Amplified products were processed using the ABI3730xl Genetic Analyzer. Data were analyzed using GeneMapper4.0 software and then compared with the DSMZ databases for reference matching.

DHL cells were treated with ABT-199 or alisertib at concentrations ranging from 10 to 10,000 nM for 24, 48 and 72 h. Changes in cell viability were evaluated using a CellTiter 96 Aqueous One Solution Cell Proliferation Assay (Promega, USA, Cat.#G3580) following the manufacturer’s protocol. The 50% inhibitory concentration (IC50) values were calculated utilizing GraphPad Prism 5.0 software.

Cells were incubated with single or combination treatment of alisertib and ABT-199 at concentrations of 1/5–5/5 IC50 for 48 h. MTS assay was then performed as described above. The effects of the combination treatment were calculated by the CompuSyn software using the Chou-Talalay combination index (CI) and isobologram methods according to the median-effect principle (23). The combination effect was designated synergism (CI <1.0), addition (CI =1.0), or antagonism (CI >1.0).

Cells were treated with ABT-199 or/and ALS at 3/5 IC50 for 48 h, then were rinsed with cold PBS once. After centrifugation at 300 ×g for 5 min, cells were resuspended in 200 µL of binding buffer (BD Bioscience, CA, USA), and then 3 µL of Annexin V-FITC and 3 µL of PI were added. The samples were analyzed by FACSCelesta post incubation for 15 min in the dark at room temperature (RT). Results were analyzed with FlowJo V10 software.

ABT-199 and alisertib inhibited the DHL cell proliferation

Cell proliferation was examined in DHL cells after exposure to ABT-199 or alisertib. Figure 1 showed that ABT-199 and alisertib suppressed the cell viability in a dose- and time-dependent manner in DOHH2 and VAL cells, respectively. The IC50 values of the two drugs ranged from 15 nM to over 1,000 nM for 24, 48 and 72 h (Table 1), suggesting that ABT-199 and alisertib inhibited the cell proliferation in DHL cells. 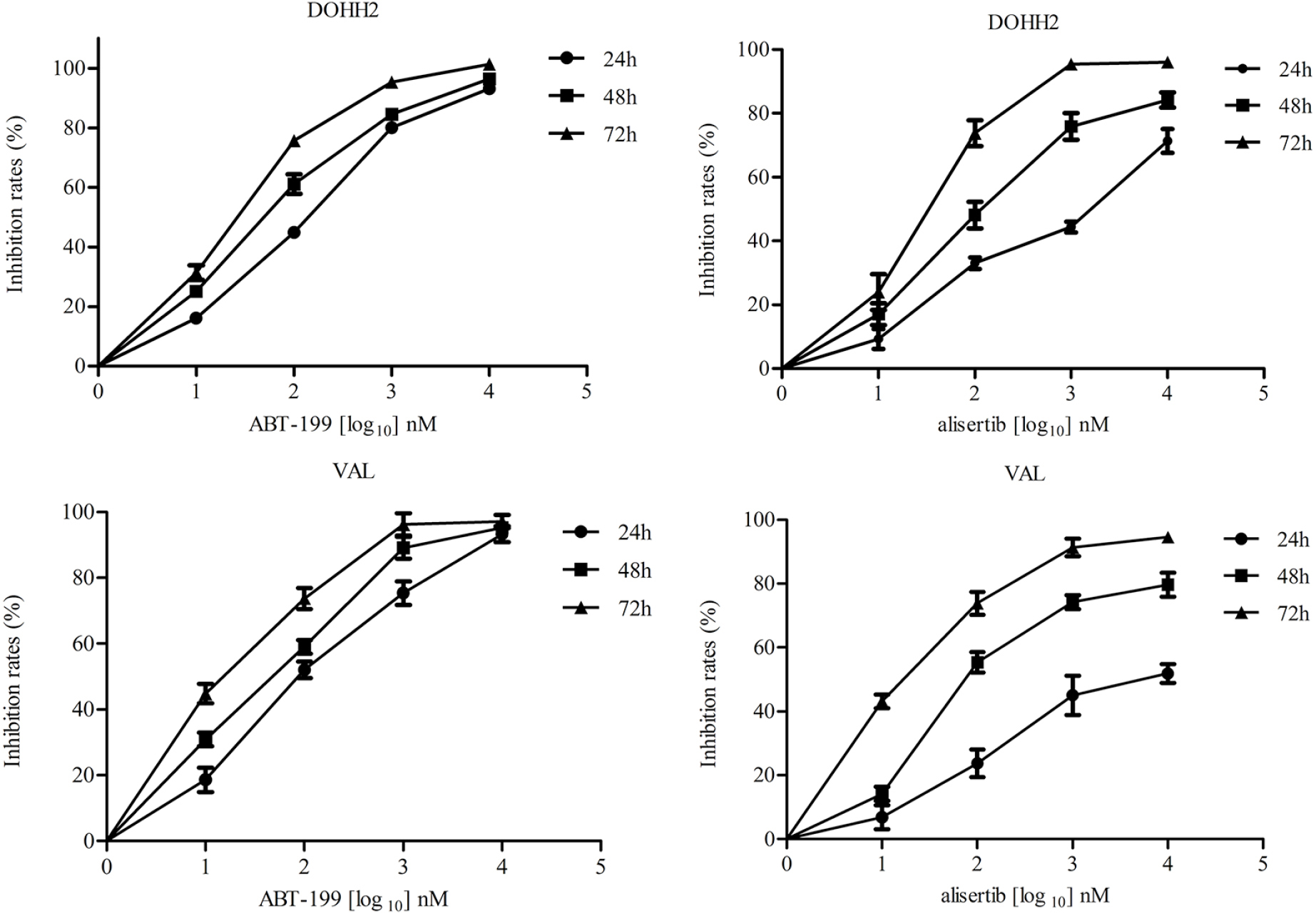 ABT-199 combined with alisertib synergistically inhibited the DHL cell proliferation

DOHH2 and VAL cells were exposed to alisertib combined with ABT-199 at a panel of concentrations (1/5–5/5 IC50). Figure 2A revealed that the combination treatment promoted stronger inhibitory activity and synergistically suppressed the DHL cell growth compared to either agent alone. Median dose-effect analysis of the combination treatment suggested that ABT-199 and alisertib had synergistic cytotoxic effects (CI <1.0) in DHL cells (Figure 2B). 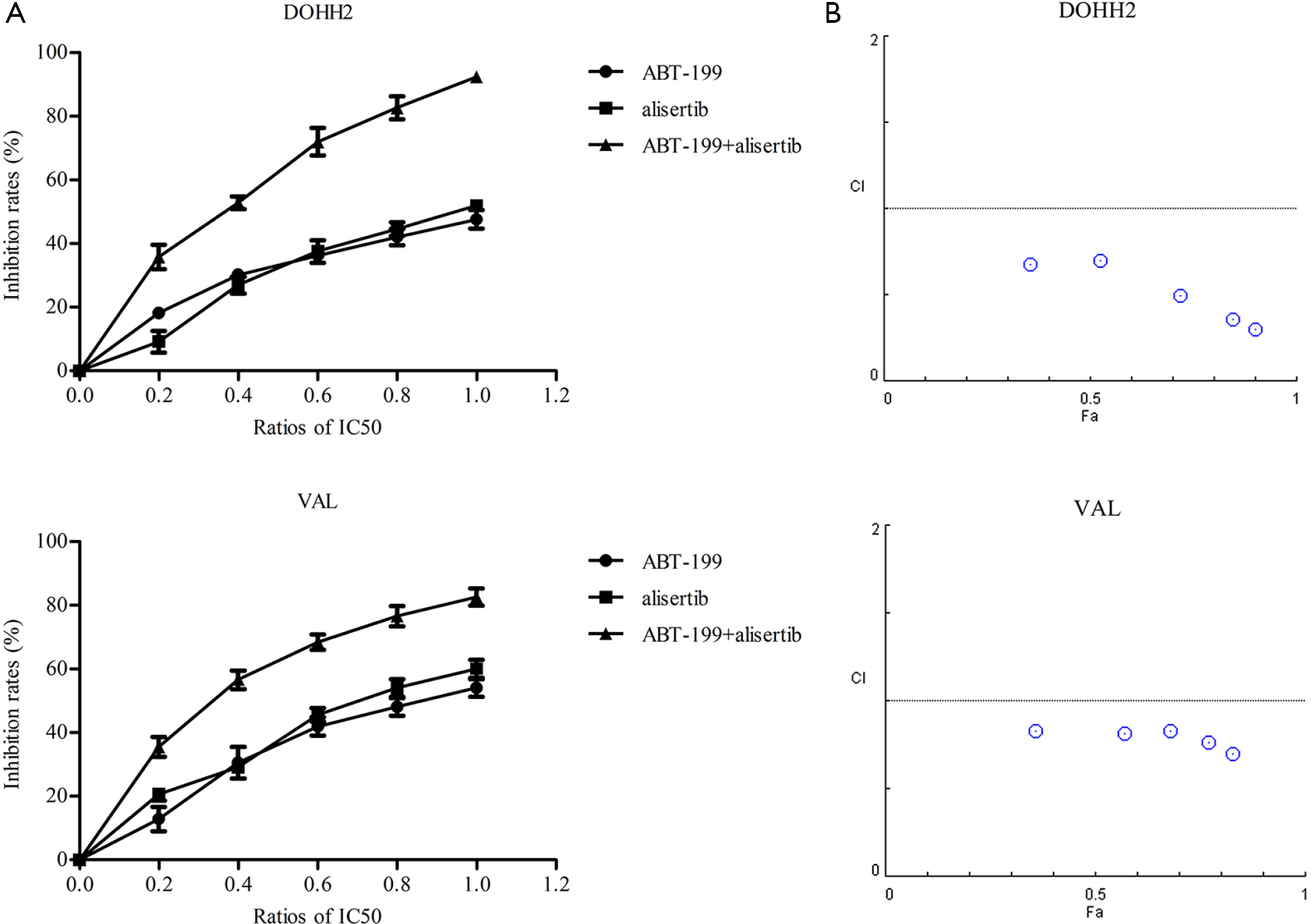 Figure 2 Combination treatment between ABT-199 and alisertib synergistically inhibited cell viability in DHL cells. (A) The inhibition rate of cell proliferation in DOHH2 and VAL cells treated with ABT-199 and/or alisertib for 48 h. Shown are mean ± SD; (B) combination index (CI) and fractional effect (Fa) of ABT-199 and alisertib are plotted by the CompuSyn program for drug interactions. CI values <1.0 indicate synergism.

Cell cycle analyses were further performed to characterize the antitumor efficacy of the combination treatment in DOHH2 and VAL cells. As shown in Figure S3, the combined treatment tended to induce more cell accumulation in G2/M phase. These results suggested that alisertib combined with ABT-199 seemed to boost G2/M phase arrest in DHL cells. 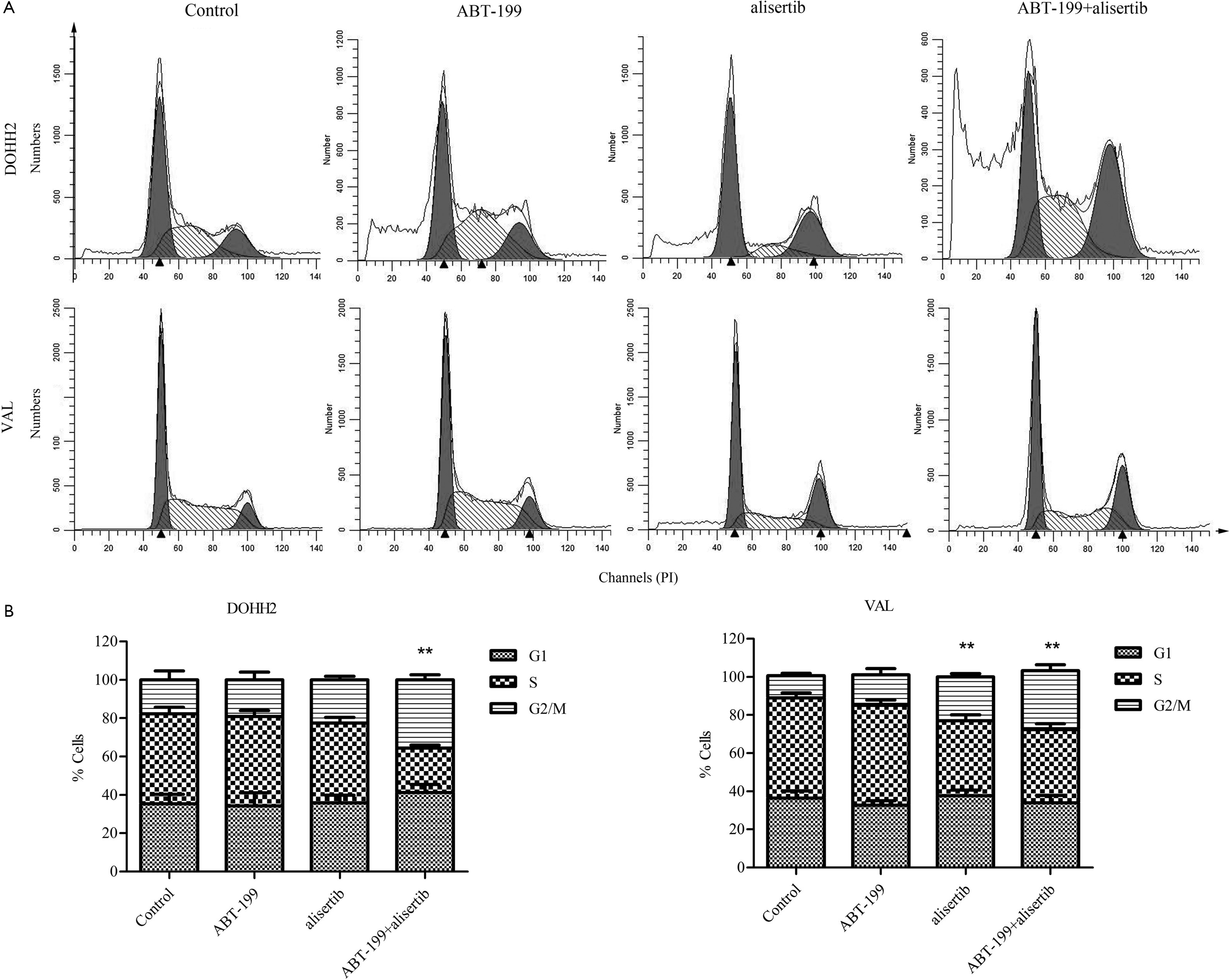 Figure S3 Combination treatment between ABT-199 and alisertib induced G2/M phase arrest in DHL cells. (A) A map of cell cycle in DHL cells treated with ABT-199 or/and alisertib for 48 h; (B) frequencies of cells in G1, S and G2/M cell cycle phases are revealed as histograms. Columns, mean of 3 experiments; bars, SD. **, P<0.01, vs. control group.

ABT-199 and alisertib regulated p53/p21 signaling in DOHH2 cells 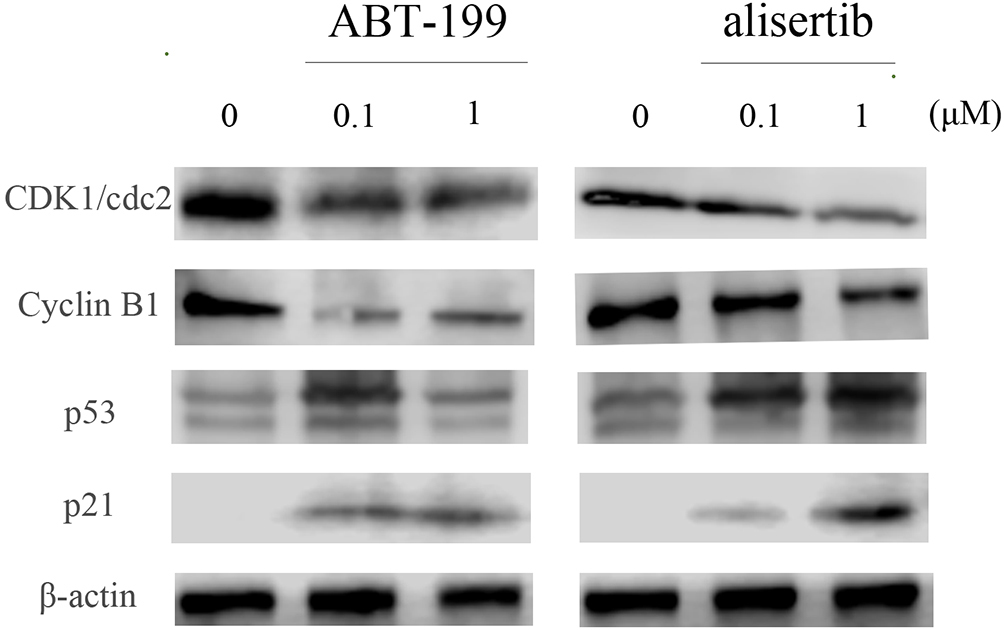 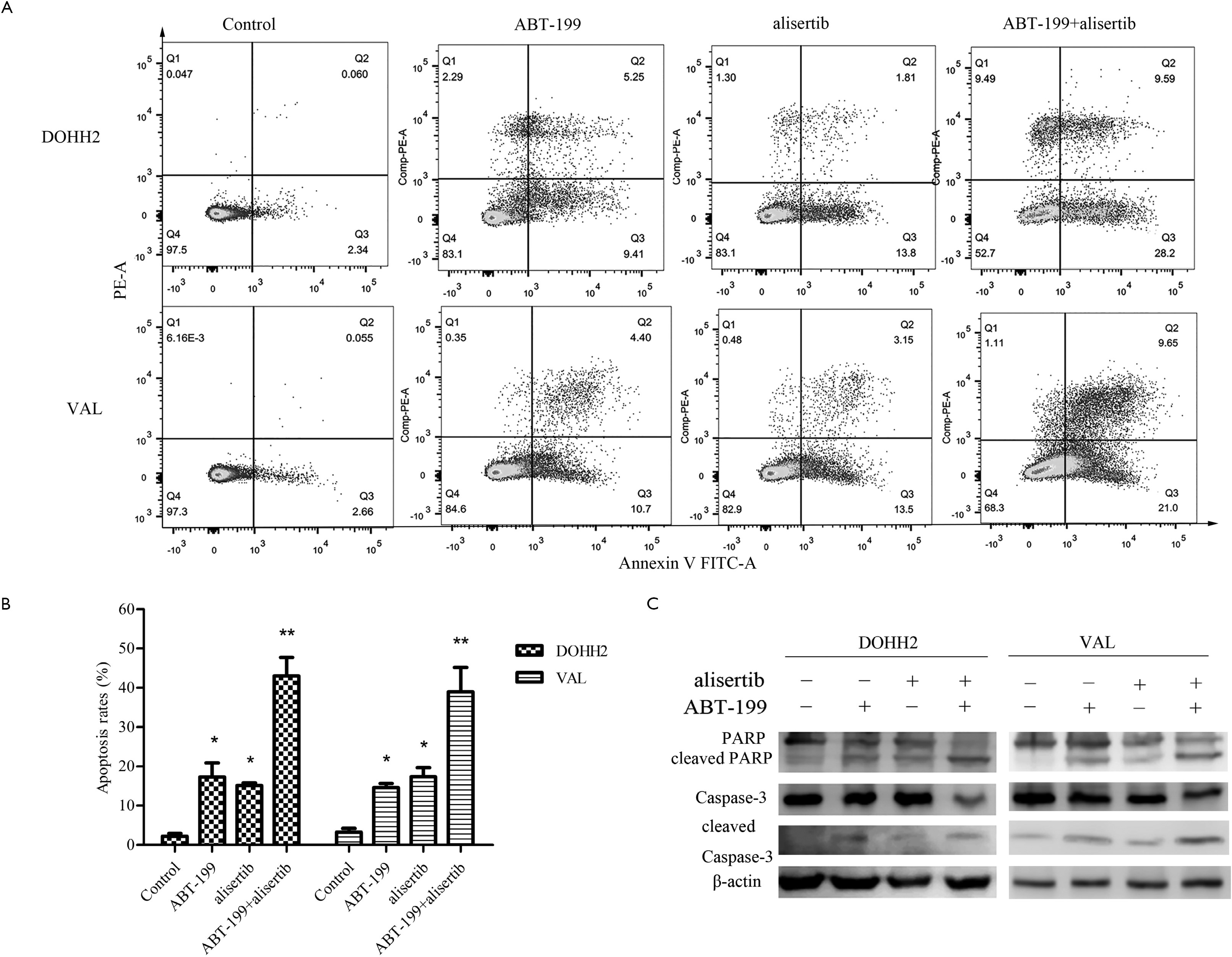 Figure S5 Immunoblot analysis of the expression of MCL1 in DOHH2 after alisertib exposure. DOHH2 cells were treated with alisertib at 0.1 and 1 µM for 24 h. Protein was extracted and subjected to immunoblotting with antibodies against MCL1 and β-actin, respectively.

The drug-targeted protein levels were further assessed to understand the mechanisms of alisertib and ABT-199 in DHL cells. Figure 4 showed that there was a remarkable decrease in MYC expression upon combination treatment. Unexpectedly, changes of Bcl-2 expression were not observed in DOHH2 and VAL cells. Some studies had shown that auto-phosphorylation of Aurka was a primary requisite for kinase activity on T288 site (25-27). Therefore we evaluated the alterations of p-Aurka on T288 site in DHL cells. Results showed that the levels of p-Aurka were slightly downregulated in cells treated with ABT-199, and were obviously decreased in cells treated with alisertib. The combination treatment further amplified the effects. 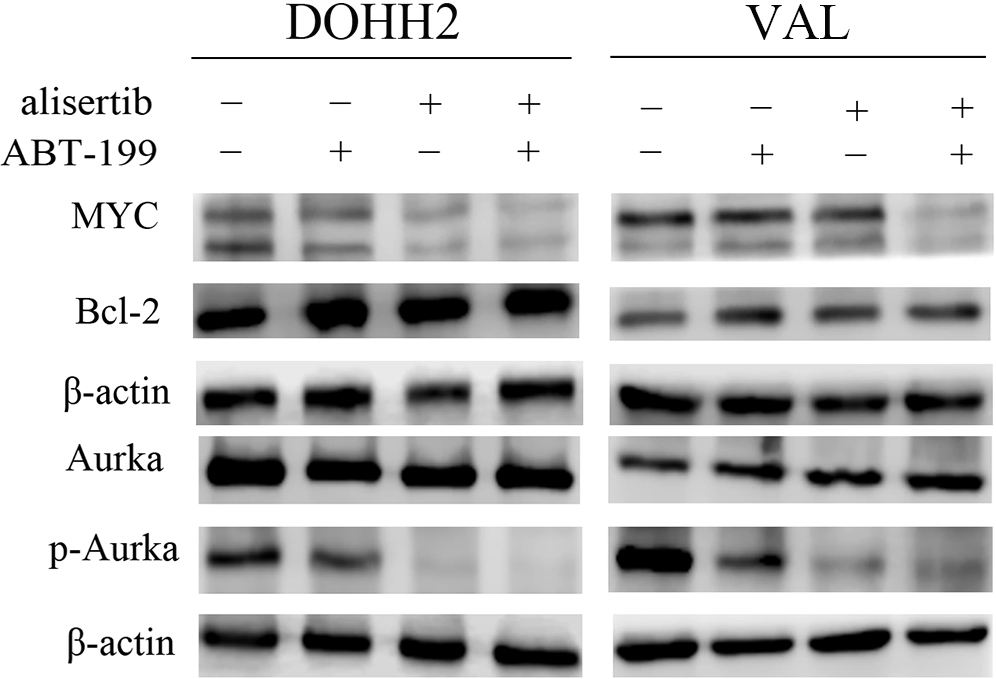 Figure 4 Expression of targeted protein levels in DHL cells treated with ABT-199 and/or alisertib. DOHH2 and VAL cells were untreated or incubated with 3/5 IC50 concentrations of ABT-199 or/and alisertib for 48 h to detect MYC and Bcl-2 expression. To observe the expression of Aurka and p-Aurka, DHL cells were pretreated with 0.2 µg/mL Noc for 10 h, then untreated or treated with the indicated concentrations of ABT-199 or/and alisertib for 1 h. 30 µg of protein lysate was subjected to Western blot. β-actin was used as an endogenous control.

So far, the standard of care is lacking for DHL. Intensified chemotherapy including R-DA-EPOCH is the preferred treatment protocol in multiple cancer centers. R-DA-EPOCH improved the progress-free survival (PFS) without OS benefit for DHL patients (28,29). Thus, novel alternative treatment modalities should be investigated to improve the prognosis of these high-risk patients (30). Targeted therapies, such as MYC and Bcl-2 based on the underlying genetic lesions of DHL, have been comprehensively explored due to their oncogenic cooperation (31). Preclinical data also suggested that targeting single oncogene (MYC or Bcl-2) might be inadequate for this lymphoma subtype (32).

MYC is an essential transcription factor which modulates diverse cellular functions, including cell proliferation, cell cycle, migration, differentiation, and metabolism (33,34). Although pharmacological attempts to directly inhibit oncogenic MYC have not borne fruit (35), the improved appreciation of MYC regulation has led to the continuous development of a range of therapeutic approaches targeting MYC-related tumors (36,37). In current study, alisertib was selected for the combination treatment owing to the intimate crosstalk between MYC and Aurka. Aurora kinase is essential for the tumor maintenance of MYC-associated lymphoma (12), whereas blocking Aurora enzyme activity stimulates apoptosis in a MYC-driven lymphoma murine model (13). Thus, simultaneous inhibition of Aurka and Bcl-2 may be required for optimal anti-lymphoma activity in DHL.

Aurka inhibitors have displayed synergistic effects in combination treatment with vincristine and rituximab for hematological malignancies (38,39), and alisertib has also exhibited preliminary clinical efficacy in relapsed/refractory non-Hodgkin lymphoma (40). In our study, the combination treatment with ABT-199 and alisertib exerted synergistic activity in the inhibition of cell viability, and induction of G2/M phase arrest and cell apoptosis in DHL cells. In particular, the combination treatment induced an enhanced delay in G2/M transition at low concentrations, followed by inducing significant cell apoptosis at higher concentrations. Studies have shown that inactivating Aurka activity leaded to increased stability of p53 and G2/M arrest in other tumor cells (41,42), which was consistent with our data in DHL cells. However, the role of ABT-199 has been poorly clarified in cell cycle regulation. In this study, we identified for the first time that ABT-199 could boost G2/M phase arrest via modulating the expression of CDK1/cdc2, cyclin B1, p21 and p53.

Taken together, our study showed that co-targeting Aurka and Bcl-2 could represent a novel alternative treatment strategy for DHL. Hence, this combination treatment between alisertib and ABT-199 should be subjected to future clinical trials to overcome specific molecular vulnerabilities in DHL lymphoma.

Conflict of Interest: The authors declared no conﬂicts of interest.