Hepatocellular carcinoma (HCC) is the fifth most common cancer worldwide, and represents a growing health burden. More than half of all new cases and deaths every year occur in China (1,2). Chronic viral hepatitis leads to liver inflammation and cirrhosis, and most cases of HCC in turn develop from liver cirrhosis (3). Despite various therapeutic options for HCC, such as liver surgery, liver transplantation, and tumor immunotherapy, the prognosis remains very poor (4), mainly because liver cirrhosis and HCC are largely asymptomatic and thus remain undiagnosed until a relatively late stage. There is therefore an urgent need to establish methods for the early diagnosis of cirrhosis and HCC. Although the combination of serum alpha fetoprotein and abdominal ultrasound scan has been widely used in the surveillance of HCC, they remain unsatisfactory (5), and novel biomarkers are urgently needed.

Cytokeratin-18 (CK18) belongs to the cytokeratin superfamily and is a component of the cytoskeleton (6). Several kinds of epithelial cells express CK18, and epithelial cell death can be evaluated by measuring the level of CK18 fragments in the peripheral blood, and CK18-based serum cell death biomarkers can reflect apoptosis (M30-antigen) and necrosis (M65-antigen). Several studies (7,8) have shown that the level of CK18 fragments in the peripheral blood after protease decomposition is associated with the level of hepatocyte apoptosis, and this has been widely used to estimate the severity of chronic liver disease (9,10). CK18 fragment levels have also been used as noninvasive biomarkers for non-alcoholic fatty liver disease, and can differentiate between simple non-alcoholic fatty liver and non-alcoholic steatohepatitis (11-13).

In the present study, we measured changes in serum CK18 levels in relation to cirrhosis and HCC, and to surgery-associated liver injury to clarify its diagnostic value for HCC and liver injury.

All patients with liver cirrhosis and HCC treated at the Department of Liver Surgery, Peking Union Medical College Hospital from December 2013 to June 2014 were enrolled in this study. These included 10 patients with liver cirrhosis and HCC with a background of chronic hepatitis B, and 10 non-cirrhotic patients with hepatic cavernous hemangioma who underwent surgical resection during the same period were included as a control group. The diagnosis of cirrhosis was based on clinical, biochemical, ultrasound, and pathologic features. Written informed consent was obtained from all patients. The study protocol was in accord with the Declaration of Helsinki and was reviewed and approved by the local ethics committee of Peking Union Medical College Hospital.

Peripheral blood samples were taken from all patients undergoing surgery within 24 h after admission on preoperative day 1 and on postoperative days (POD) 1, 3, and 5. Blood samples were collected into additive-free vacuum tubes after at least 12 h of fasting, allowed to coagulate for 6 h, and then centrifuged at 300 g for 20 min to remove any remaining cells. Serum samples were aliquoted and stored at −80 °C until batch analysis.

Serum levels of total CK18 and CK18 cleavage fragment (CK18Asp396; M30-antigen) were measured in patients and controls by sandwich enzyme-linked immunoassay according to the manufacturer’s instructions (M65 ELISA kit and M30-Apoptosense ELISA kit, respectively; PEVIVA, Bromma, Sweden). Briefly, samples or standards were added to the wells, followed by the antibody mix (M65 or M30). After incubation, the wells were washed to remove unbound material and the chromogenic reagent was added. This reaction was then stopped by adding stop solution to complete the color change from blue to yellow. The absorbance at 450 nm was then measured with a microplate reader (Hamilton, Switzerland). All assays were performed in duplicate. Using the origin software for standard curve fitting, the concentrations of CK18 and CK18 cleavage fragments in the sample at each time point were calculated from the fitting equation, based on the standard curve parameters provided in the kit.

Ten consecutive patients with cirrhosis and HCC admitted to our hospital and 10 control patients with hepatic hemangioma admitted during the same period were enrolled in the study. Age, gender, Child-Pugh score, status of cirrhosis, and BCLC stage are summarized in Table 1. 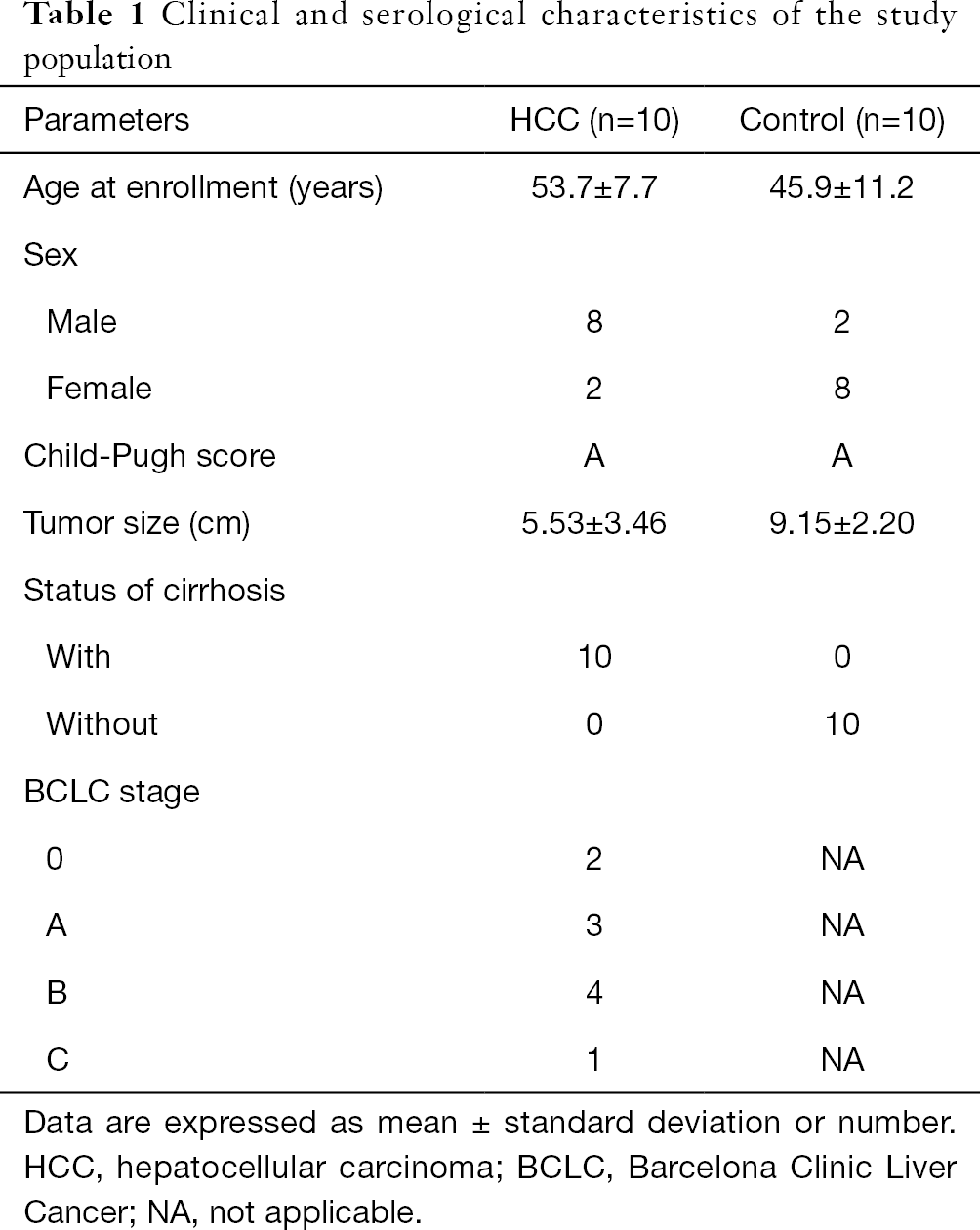 Relationship between CK18 and BCLC stage

The prognosis of HCC is poor because of difficulties in early diagnosis and in monitoring the progression of the disease. Although AFP is widely used as a marker, it remains unsatisfactory (16), and novel biomarkers for the diagnosis and assessment of HCC are urgently needed. In this study, we analyzed perioperative changes in serum levels of CK18 in patients with liver cirrhosis and HCC, and evaluated the relationships between these biomarkers and liver damage and disease severity. Serum levels of total CK18 and CK18 cleavage fragments were increased in patients with liver cirrhosis and HCC against a background of chronic hepatitis B, compared with a control group, and both serum total CK18 and CK18 fragment levels were positively associated with BCLC stage. Furthermore, liver resection affected CK18 levels, which mirrored changes in ALT.

CK18 is released into the blood from dead cells and its serum level thus represents the levels of apoptosis and necrosis, suggesting that it may be an appropriate non-invasive biomarker for the assessment of cancer. Indeed, CK18 levels have been shown to be elevated in various cancers, including breast, gastric, and lung cancer (17-19). We also found that CK18 was remarkably increased in HCC, consistent with previous reports (14,15). Serum CK18 levels may thus have diagnostic value in patients with chronic hepatitis B-related cirrhosis and liver cancer. However, serum levels of CK18 caused by necrosis of the liver cannot reflect the lesion, which may be due to no active inflammatory lesions of the liver in patients with chronic liver disease, necrosis of hepatocytes is not the major pathophysiological factor.

CK18 levels were also related to BCLC stage, suggesting that CK18 may be a valuable indicator of disease severity. Indeed, Elalfy et al. (20) showed that patients with higher levels of M30 fragments of CK18 were more likely to have invasion of HCC.

Patients with HCC usually suffer from cirrhosis, though which of these has the greater impact on CK18 levels is unknown. The current results suggest that although CK18 levels fell to near normal levels after surgical resection of the tumor, they remained higher than normal. Given that surgical resection is unlikely to have a major impact on cirrhosis in the short term, this implies that HCC may be the main cause of the CK18 increase, with cirrhosis playing a smaller role. Similarly, Waidmann et al. (14) found that HCC patients from different cohorts showed higher serum levels of total CK18 and CK18 cleavage fragments than patients with liver cirrhosis without HCC. CK18 levels may thus be a potential biomarker for differentiating between patients with HCC and cirrhosis.

To the best of our knowledge, this study provides the first detailed evidence relating to perioperative changes in serum levels of total CK18 and CK18 cleavage fragments in patients with cirrhosis and HCC undergoing liver resection. Surgical damage causes the breakage and necrosis of a large number of hepatocytes, resulting in the release of intracellular cytoplasmic ALT and cell membrane CK18. We speculated that CK18, especially CK18 produced by liver cell necrosis, may thus reflect liver damage caused by surgery The dynamic changes in CK18 and ALT accordingly showed similar postoperative trends in the current study; however, the elevated levels of CK18 produced by hepatocyte necrosis had returned to preoperative levels by POD 5 in both the cirrhotic/HCC and control patients, whereas ALT levels remained significantly higher than preoperative levels on POD 5. The plasma half-life of ALT in humans is 47 h, and the above results suggest that the half-life of CK18 may be shorter. This novel finding suggests that serum levels of CK18 will fall rapidly in the absence of persistent hepatocellular injury, making it a potentially useful marker of disease activity and for judging the efficacy of drug treatments.

Total CK18 levels were increased on POD 1 compared with preoperative levels in both the HCC and control groups, though the increase was much more marked in the HCC group. This suggests that acute surgical liver injury had a greater effect on serum CK18 levels in patients with cirrhosis and liver cancer associated with chronic liver injury. Significantly, this suggests that the degree of change in serum CK18 levels may be used to detect the occurrence of acute surgical liver injury in patients with cirrhosis and liver cancer.

This study had some limitations. Notably, the sample size was small, and further studies with larger sample sizes are needed to confirm these findings. Moreover, future studies should include patients with liver cirrhosis but without HCC, to clarify the relative effects of liver cirrhosis and HCC

Serum CK18 levels were significantly elevated in patients with liver cirrhosis and HCC, with HCC likely to be the main cause of the increase in CK18. Surgical liver injury may also lead to an increase in serum CK18 levels mirroring increases in ALT; however, CK18 may have a shorter plasma half-life than ALT, making it a more sensitive indicator of liver injury and the severity of HCC.

Ethical Statement: The study protocol was in accord with the Declaration of Helsinki and was reviewed and approved by the local ethics committee of Peking Union Medical College Hospital. Written informed consent was obtained from all patients.