The morbidity and mortality of lung cancer, in which non-small cell lung cancer (NSCLC) accounts for approximately 85%, ranks first among all human malignant tumors in many countries (1,2). The morbidity of lung adenocarcinoma (LUAD) has gradually increased in the past decades. Nowadays, LUAD has replaced lung squamous cell carcinoma (LUSC), becoming the most common type of lung cancer in China (2). In recent years, although the surgical techniques, strategies of chemoradiotherapy and target therapy have been developed, the 5-year overall survival (OS) rate of lung cancer is still very low (3). It’s well known that early detection, early diagnosis and early treatment are the most effective strategies to improve the survival rate of lung cancer patients (4). However, there is no efficient clinical biomarker for early diagnosis, treatment and prognosis prediction of lung cancer. Therefore, it’s urgent to locate the diagnosis, prognosis markers and drug targets of lung cancer.

A microRNA (miRNA) is a small non-coding RNA molecule (containing about 22 nucleotides) that functions in RNA silencing and post-transcriptional regulation of gene expression (5). It is widely believed that miRNA plays an important role in tumorigenesis. miR-486 located on chromosome Chr8 was first discovered in fetal liver tissue in 2005 (6). As a member of miRNAs, miR-486 also has been reported to be associated with many tumors. Previous studies have shown that the expression profile and mechanism of miR-486 in NSCLC were controversial (7-10). In present study, we mainly explore the expression profile and prognostic value of miR-486 in NSCLC.

This study was reviewed and approved by the Research Ethics Committee of The affiliated Changzhou No. 2 People’s Hospital of Nanjing Medical University. Written informed consent was obtained from all the patients. All specimens were processed and anonymized according to the ethical and legal standards.

A total of 150 tissue samples (140 NSCLC tissue samples and 10 normal lung tissue samples) were obtained from patients who were operated at the Thoracic Surgical Division in year 2005. Patients with NSCLC were staged and graded according to the international staging system or the 2004 World Health Organization criteria. Patients included in this study received no preoperative chemotherapy or radiotherapy and had no other malignant tumors within 5 years prior to diagnosis. According to the method described in our previous study (11), a TMA containing 150 tissue samples was constructed.

A detection kit named miR-486 ISH Kit (Boster, Pleasanton, CA, USA) was used to detect miR-486 in TMA. Antisense miR-486 probes were as follows: 5’-CTCGGGGCAGCTCAGTACAGGA-3’. Briefly, the ISH was performed as follows (11): the sections were deparaffinized in xylene, rehydrated in graded ethanol, digested in pepsin solution and then postfixed in 1% paraformaldehyde (PFA) for 10 min. Hybridization was then carried out with a mixture containing target probes to miR-486 at 37 °C overnight. After wash with saline sodium citrate (SSC), the sections were incubated at 37 °C for 30 min with blocking buffer. The slides were visualized using DAB (3,3'-diaminobenzidine) and counterstaining with hematoxylin.

Evaluation of miR-486 expression was semi-quantitatively performed by two independent investigators in a blinded fashion. The intensity of cytoplasmic staining was graded as absent, weak, moderate, or strong. The extent of cytoplasmic staining was expressed as the percentage of positive cancer cells from 0% to 100%. As previously described (12), tumors were scored (score 1–4) according to the intensity and extent of staining. In this study, tumors with score 3/4 were defined as positive miR-486 staining, whereas tumors with score 1/2 was defined as negative miR-486 staining.

The data were presented as mean ± standard deviation (SD). OS time was defined as the date of primary surgery to the date of death or latest follow-up. Student’s t-test, χ2 test, Kaplan-Meier survival analysis, and Cox regression analysis were performed. SPSS 23.0 software (IBM, NY, USA) was used to process the data and draw the graphs. P<0.05 was considered statistically significant.

Characteristics of the patients

Table 1 shows the clinicopathological characteristics of the 140 NSCLC patients. The median age of the patients was 60 years (range from 26 to 79 years). The overwhelming majority of NSCLC patients are male. Fifty-seven percent of the tumors were LUSC and forty-two percent of the tumors were poorly differentiated. And, seventy-nine percent patients were in stage I or II. Clinical follow-up was recorded until July 2013. The median follow-up time was 45 months (range from 3–101 months). Ninety-one patients died at the end of follow-up.

Expression of miR-486 in NSCLC patients

The Kaplan-Meier survival curves were plotted to elaborate the correlation between miR-486 and the patients’ OS. Figure 2A showed that in all the 140 patients (stage I–III), high expression of miR-486 was correlated strongly with shortened OS (P=0.001). Further, the survival of patients with stage I or II–III NSCLC was also analyzed. We discovered that the difference in survival between the low and high miR-486 groups was statistically significant in stage I patients (P=0.005, Figure 2B). However, miR-486 expression was not found to be correlated to OS in patients with stage II–III NSCLC (P=0.090, Figure 2C).

Finally, univariate and multivariate analysis were made. As shown in Table 3, miR-486 and lymph node status had an independent prognostic meaning (P=0.002 and 0.024, respectively) for the whole group of 140 patients for OS. 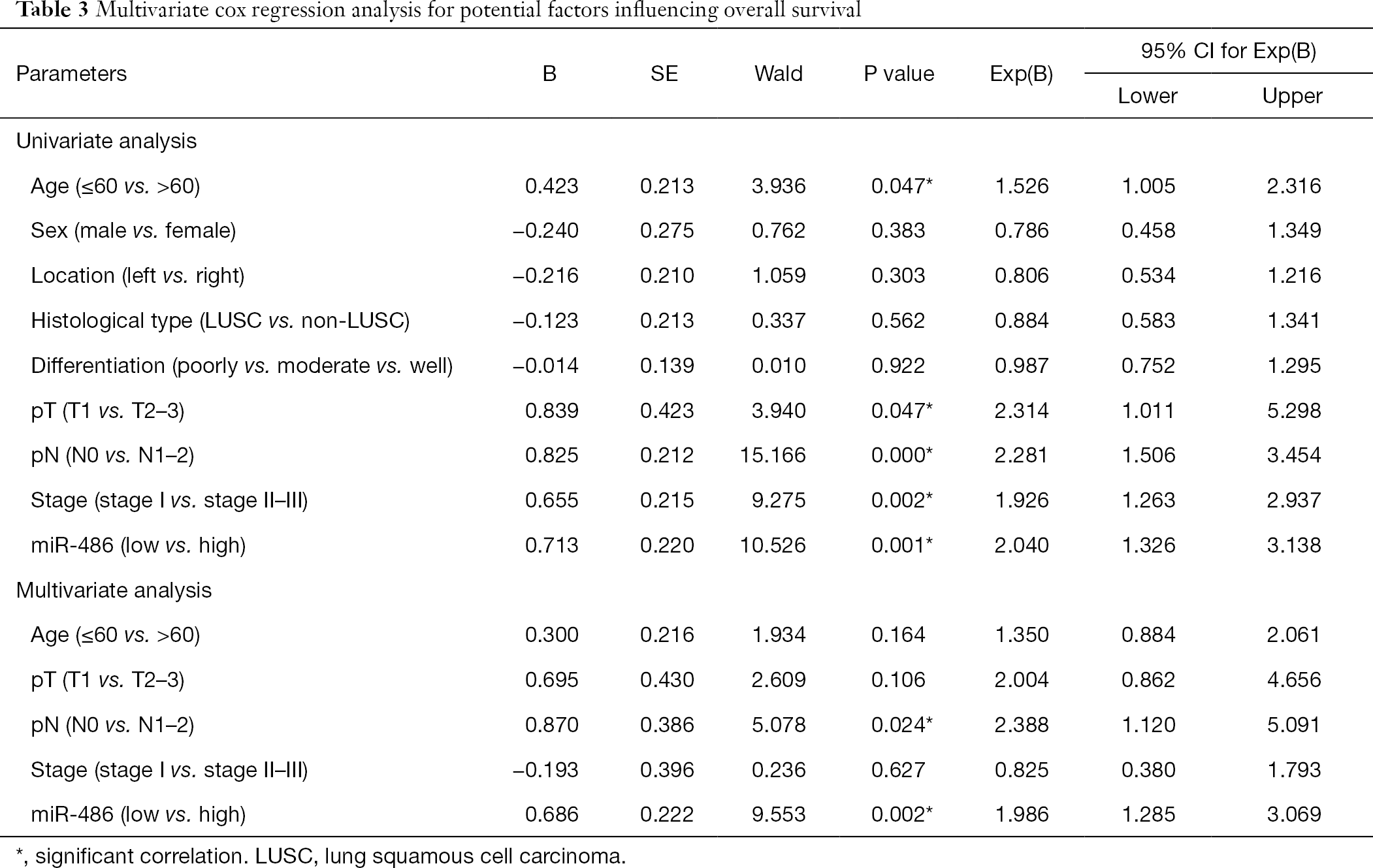 NSCLC is a highly malignant and aggressive tumor type, with a poor 5-year OS rate (1,2). Similar to many other malignant tumors, NSCLC is initiated by either the activation of oncogenes or the inactivation of tumor suppressor genes (13). Thus, in the past decades, many attempts have been made to identify the key biomarker for diagnosis, treatment and prognosis prediction of NSCLC. Since the discovery of the first miRNA in 1993 (14), more and more miRNAs have been discovered, and the role of miRNAs has been gradually revealed. The first miRNA found to be associated with NSCLC was let-7 (15). Since then, more miRNAs were found to be associated with NSCLC. Such as, Zheng et al. found that miR-155, miR-197 and miR-182 were significantly higher expressed in NSCLC, and the combined detection of the three miRNAs had a diagnostic value for lung cancer (16). A study, in which the CT scan and miRNA detection were combined, revealed that after a low-dose spiral CT scan, the detection of 34 miRNAs expression level in the serum could be used to identify benign pulmonary nodules, high-risk lung cancer and malignant tumors (17). Yet, another study discovered that miR-205 and miR-21 can be used to identify LUAD and LUSC (18). By using mouse NSCLC model, miR-34 and miR-7 were found could affect the tumor growth (19,20). It is reported that miR-192, miR-135a, miR-133b and miR-9 were associated with chemotherapy resistance in NSCLC (21-23). miR-195, let-7, etc. were found to be associated with NSCLC prognosis (24,25).

In this study, we mainly investigated the prognostic value of miR-486. We found that miR-486 was high expressed in majority of NSCLC tissues (mainly expressed in the cytoplasm of tumor cells). Also, miR-486 expression was found to be correlated with tumor differentiation. Further, miR-486 was demonstrated to have a prognostic value in NSCLC patients, especially in stage I patients. And, miR-486 had an independent prognostic meaning for NSCLC patients. Combining our previous study results (26,33), we have more reasons to believe that miR-486 functions as an oncogene in NSCLC. However, this study still has some shortcomings, such as too few normal lung tissue samples.

In conclusion, miR-486 is an unfavorable prognostic biomarker for NSCLC patients. These findings provide additional evidence for clarifying the role of miR-486 in NSCLC.

Ethical Statement: The authors are accountable for all aspects of the work in ensuring that questions related to the accuracy or integrity of any part of the work are appropriately investigated and resolved. This study was reviewed and approved by the Research Ethics Committee of The affiliated Changzhou No. 2 People’s Hospital of Nanjing Medical University. Written informed consent was obtained from all the patients.