Gastric cancer (GC) is one of the leading causes of cancer-related mortality worldwide (1), and has the second highest incidence rate of all cancers (2,3). As the most common malignancy in the digestive system, GC is a major public health concern (4), especially in China which is among the countries with the highest incidence of GC (5-7). Although the etiology of GC has not been fully elucidated, its pathogenesis is believed to be associated with extremely complicated processes that involve multiple factors (8). To a large extent, early diagnosis significantly determines the prognosis of GC, as the 5-year survival rate of early GC is more than 90%, while that of advanced GC is less than 50% (9). Therefore, timely detection of GC-specific tumor markers can assist early diagnosis, reduce mortality rate, and improve prognosis of GC patients. However, because of the lack of specific symptoms and signs in early stages of GC, it is difficult to diagnose most patients. Exploring economic, effective, and safe screening methods for the early diagnosis of GC and predicting the prognosis of GC patients is extremely important.

CXC chemokine 8 (CXCL8), which belongs to the family of CXC chemokines (C is cysteine, X refers to an arbitrary amino acid), is generated by many cells (10). CXCL8 has a chemotactic effect on specific white blood cells and can be stimulated by phytohemagglutinin, lipopolysaccharide, bacterial virus products, tumor necrosis factor-α (TNF-α), and interleukin (IL). Also known as IL-8, CXCL8 activates and promotes a series of inflammatory responses, such as chemotaxis and degranulation of neutrophils (11). CXCL8 is abnormally expressed in many tumors and is involved in tumor development (12). In addition to chemotaxis and activation of immune cells, CXCL8 expression is closely related to the occurrence, development, and metastasis of cancer cells in many tumors (13). However, the diagnostic and prognostic values of CXCL8 in GC have not been extensively studied.

In the current study, we explored potential prognostic predictors and therapeutic targets by systematically analyzing the gene expression profiles of GC and control samples using the Cancer Genome Atlas (TCGA) database, and found that CXCL8 is up-regulated in GC. We further validated the CXCL8 expression pattern in the Oncomine database, a cancer microarray database, and a web-based data-mining platform (14). Our subsequent survival analysis suggests that CXCL8 is a potential biomarker for predicting progress of GC.

Data for the GC tissue (375 cases, GC group) and neighboring noncancerous adrenal tissues (32 cases, Control group) with complete clinical and survival information were downloaded from the TCGA database (https://cancergenome.nih.gov/). The RStudio-1.1.419 software was employed to analyze the differential expression levels between the two groups. The Oncomine database (https://www.oncomine.org) (14) was also selected to search the differential expression levels of target genes between groups. Additionally, the Kaplan-Meier Plotter database (http://kmplot.com/analysis/in­dex.php?p=service&cancer=gastric) (15) was used to generate the overall survival (OS) and disease-free survival (DFS) curves.

The Kyoto Encyclopedia of Genes and Genomes (KEGG) Orthology Based Annotation System (https://david.ncifcrf.gov/), based on multiple databases including pathways, diseases, and gene ontology (GO), was used to execute KEGG pathway enrichment analysis and GO enrichment analysis (16,17).

The RStudio Tool was used to generate PPI data (18). In addition, the database was employed to quantify the interrelationships of analyzed differentially expressed genes (DEGs). Results were visualized using Cytoscape software (19). A confidence score >0.4 was defined as significant. The hub genes were those that had a connectivity degree over 20 in the PPI network.

Prognostic value of each hub gene

Based on the TCGA database, the RStudio-1.1.419 software was used to investigate the impacts of the expression levels of each hub gene on OS or DFS of GC patients. The log-rank test and the Mantel-Cox test were used as hypothesis tests. The cohort thresholds were adjusted and gene-pairs were used.

The Kaplan plot univariate and Cox multivariate survival analyses were used to verify the correlation between gene expression and clinicopathological parameters in GC patients, as well as their clinical prognostic significance. The survival plots also contained the cox proportional hazard ratio and P=0.05 was set as the significance level.

The IHC assay data from GC and normal gastric tissues were downloaded from The Human Protein Atlas (https://www.proteinatlas.org/ENSG00000169429-CXCL8/tissue/stomach). A polyclonal antibody against human CXCL8 (HPA057179) was used for the IHC assay.

SPSS 22.0 software (IBM, Armonk, NY, USA) was used for statistical analysis. The Chi-square test and Fisher exact probability method were used to analyze the correlations between the expression levels of biomarkers and the clinicopathological characteristics of patients. Statistical significance was defined as P<0.05.

Identification of DEGs between GC and healthy control samples

First, we performed gene expression profiling for 375 GC tissues and 32 normal gastric tissues, whose information was deposited in the TCGA database. After quality assessment and data preprocessing, such as a rank aggregation analysis of the expression matrices, we identified 1,313 statistically significantly altered genes, including 781 up-regulated and 532 down-regulated genes, in GC samples compared to control tissues. The heatmap (Figure 1A) and Volcano plot (Figure 1B) show the up-regulated DEGs (red) and down-regulated DEGs (green). 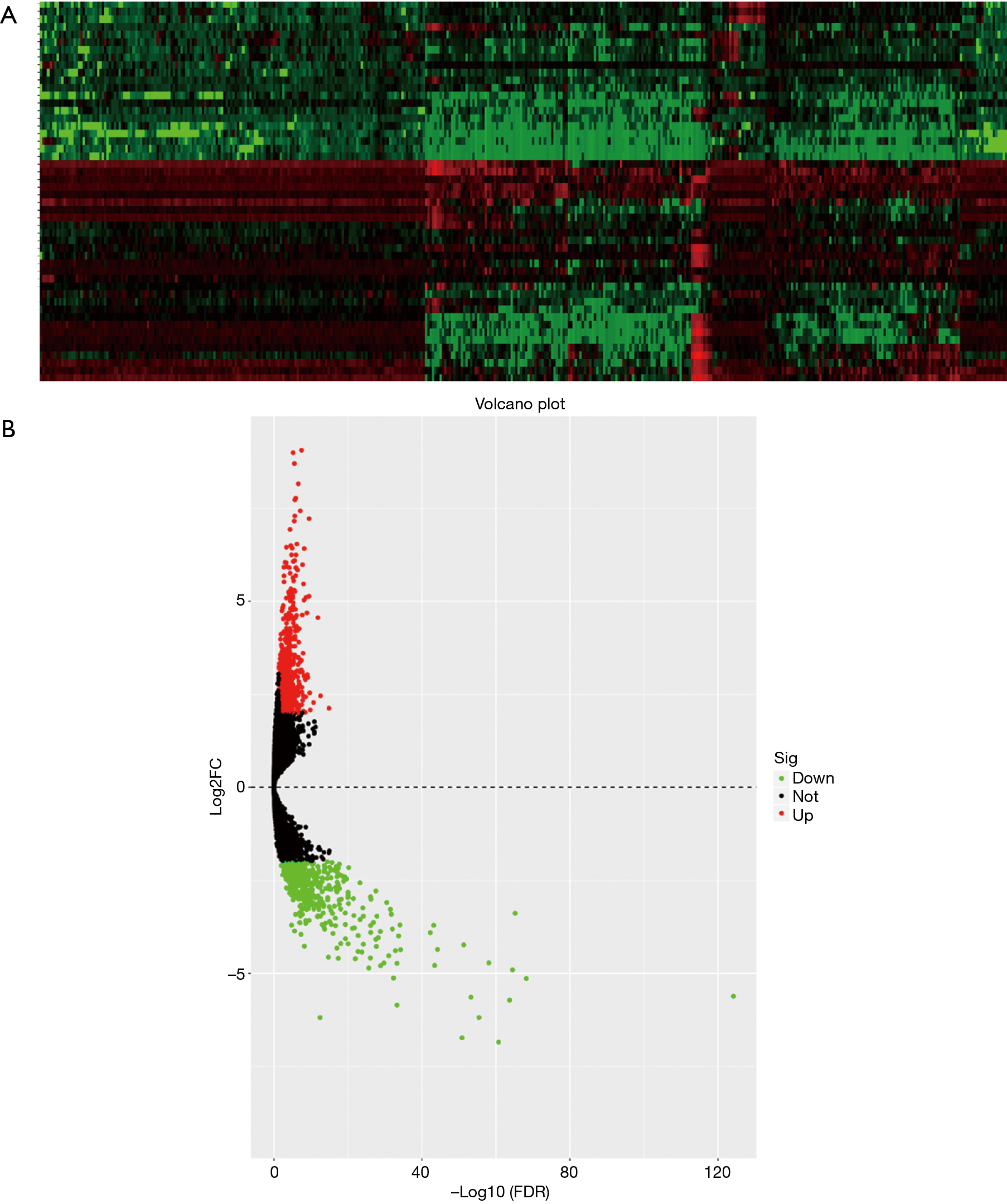 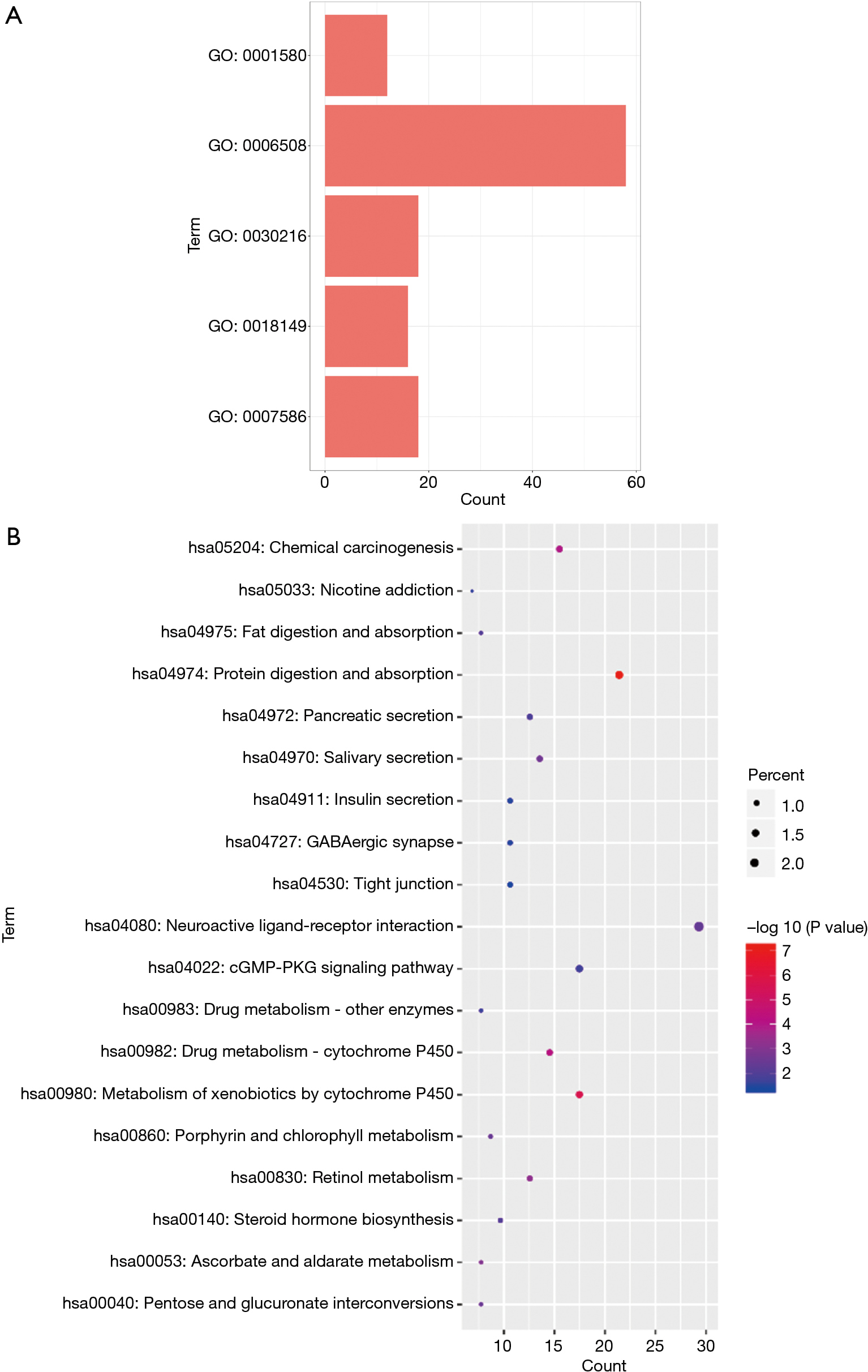 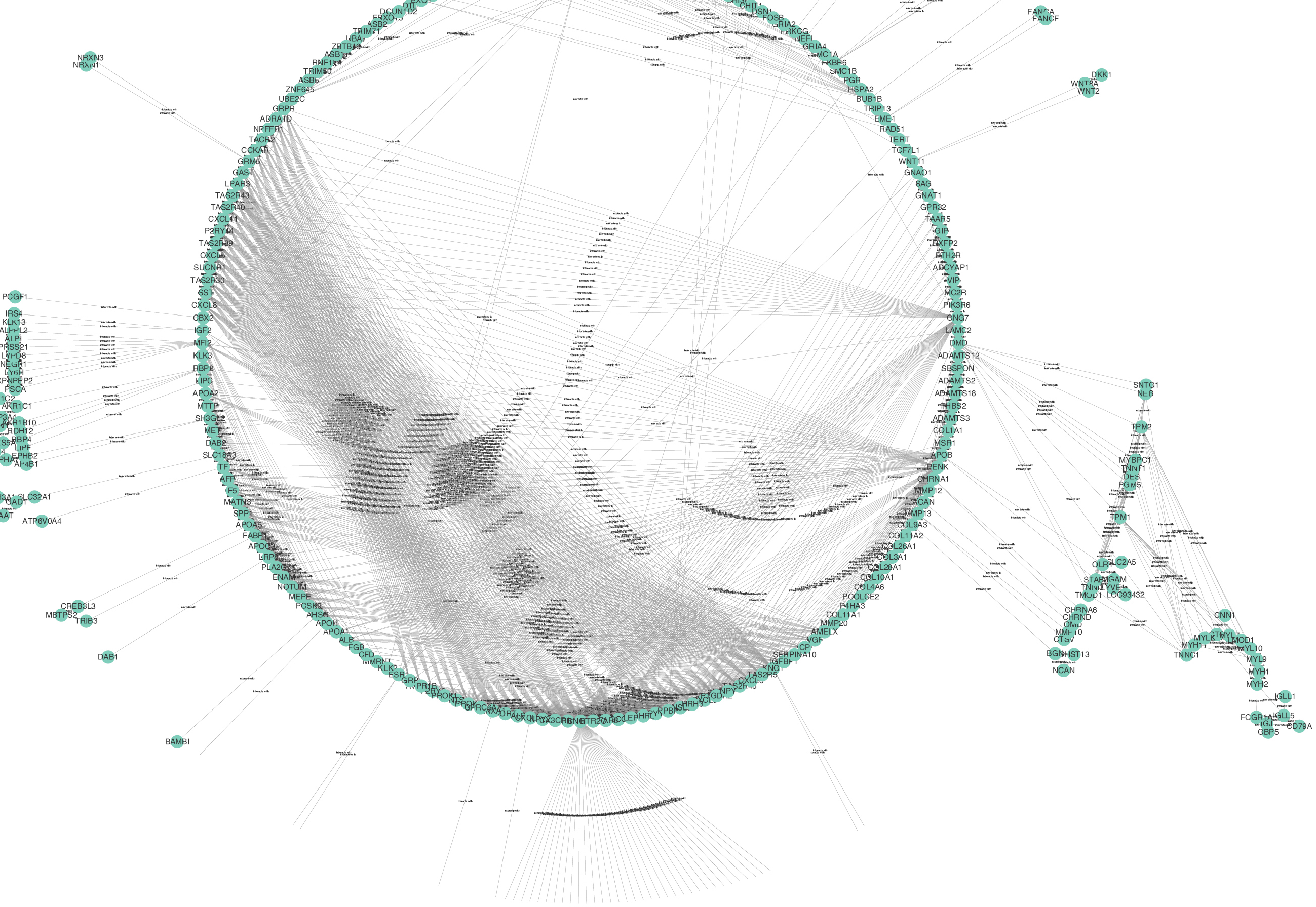 Assessment of hub genes in the TCGA and Oncomine database

To assess the roles of the ten hub genes in GC, we validated the gene expression using both the TCGA and Oncomine databases. CXCL8 was the only gene that was up-regulated in tumor tissues in both the TCGA and Oncomine databases. In the comparison analysis, the mRNA levels of CXCL8 were also up-regulated in multiple cancer types (Figure 4) and in cancer tissues from different cohorts of patients with GC (Figure 5) compared to controls. In addition, we analyzed genes that potentially correlated with CXCL8 in the GC data in the Oncomine database. Twenty genes—AREG, HBEGF, IL6, IL1B, PTGS2, KLF6, FOS, FOSB, MAP3KB, ETS2, FOSL2, LIF, PIM1, OSM, IL1RN, CSF3, WEE1, CTGF, SERPINE1, and MLF1—correlated with CXCL8 in GC (Figure 6). 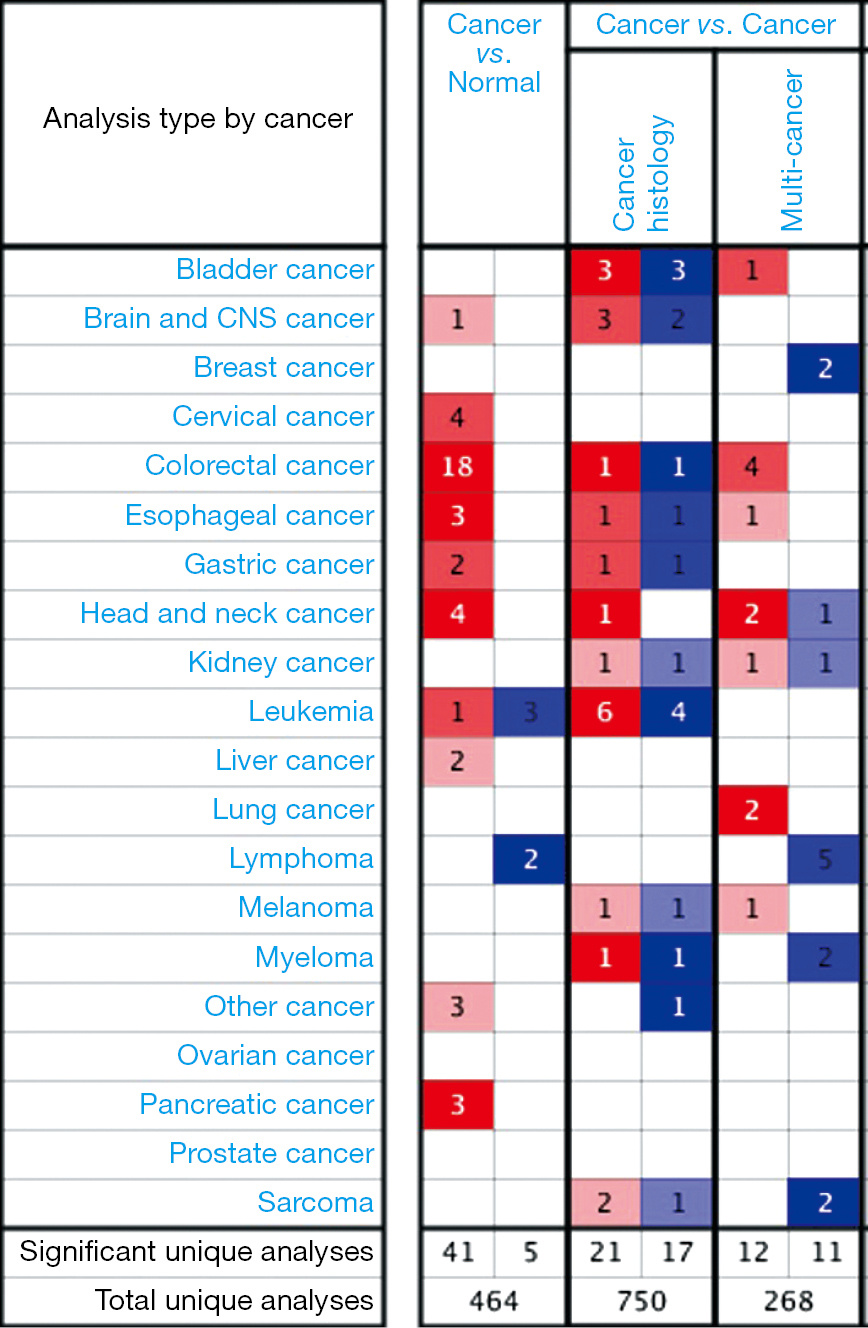 Figure 4 The mRNA levels of CXCL8 in different tumor types. This graphic shows the numbers of datasets with statistically significant mRNA over-expression (red) or down-regulation (blue) of the target gene (cancer vs. normal tissue). The P value threshold is 0.01. The number in each cell represents the number of analyses that meet the threshold within those analyses and cancer types. The gene rank was analyzed by calculating the percentile of target genes in the top of all genes measured in each study. Cell color is determined by the best gene rank percentile for the analyses within the cell. 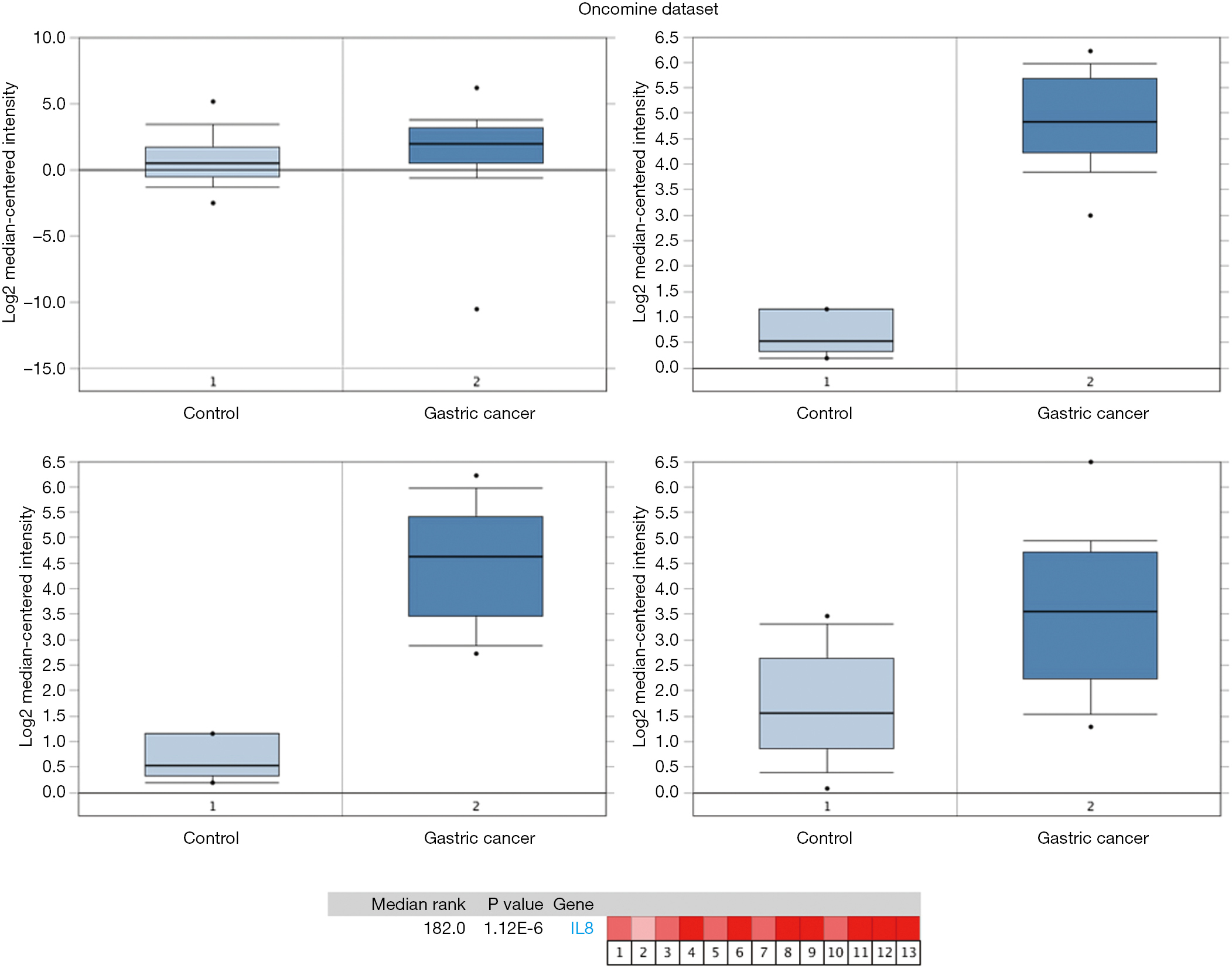 Figure 5 Analyses on the mRNA levels of CXCL8 in Oncomine database-derived GC and control samples. Box plots derived from gene expression data in the Oncomine database compare the expression of CXCL8 mRNA in normal and GC tissues from different cohorts. The P value was set at 0.01 and fold change was defined as 2. GC, gastric cancer.

We further validated CXCL8 protein expression in clinical samples from the tumor tissues of GC patients. As shown in Figure 7, IHC analysis suggested medium expression of both cytoplasmic and membranous CXCL8 in GC tissues. To reveal the clinical prognostic significance of CXCL8 expression, we used the Kaplan plot univariate and Cox multivariate survival analyses to verify the correlation between CXCL8 mRNA levels and clinicopathological parameters in GC patients. The patients with lower CXCL8 mRNA levels in the tumor tissues displayed significantly (P<0.001) prolonged relapse-free survival (RFS) compared to the patients with higher CXCL8 mRNA levels in tumor tissues (Figure 8). Therefore, CXCL8 is a potential biomarker for predicting disease progress and prognosis in GC. 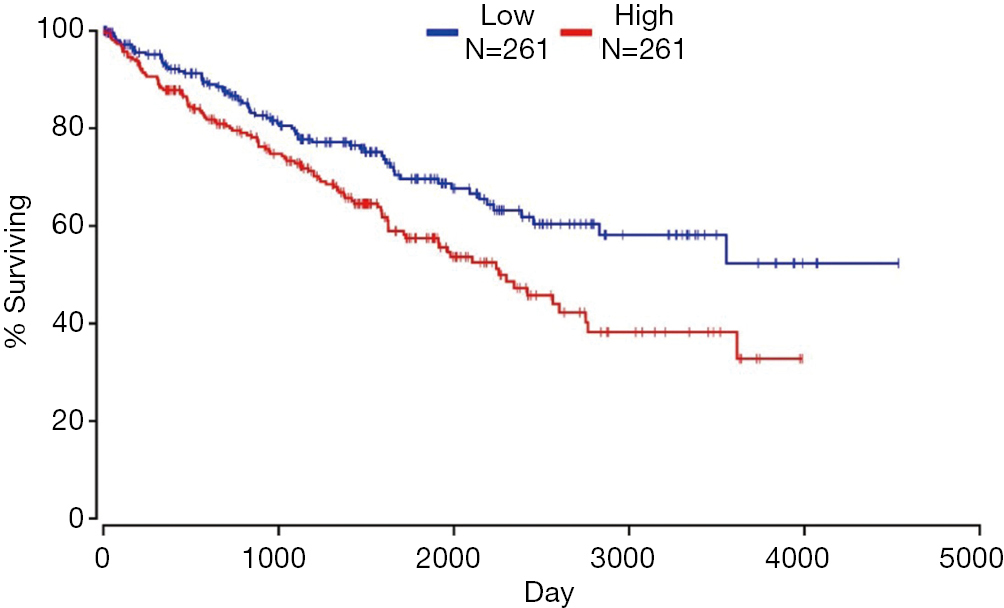 There are more than ten immunohistochemical markers that can be used to clinically diagnose GC and predict the prognosis of GC patients. However, markers with high specificity and sensitivity are still lacking (20). In this study, we conducted integrated bioinformatics analysis of gene expression datasets in GC and control samples using the TCGA and Oncomine databases, and screened hub genes that might be involved in GC pathogenesis. We found that CXCL8 mRNA levels were increased in GC tissues compared to normal gastric tissues, and that GC patients with higher CXCL8 tumor expression had significantly shortened RFS. Thus, we conclude that CXCL8 is a potential novel biomarker that could be used for the early diagnosis of GC and prognosis prediction of patients with GC.

CXCL8 can contribute to the tumorigenesis and pathogenesis of GC in many aspects. CXCL8 is predominantly secreted by macrophages and contributes to the immunosuppressive microenvironment by inducing PD-L1+ macrophages in GC (10). Consistent with our conclusion, CXCL8 inhibitors have been reported to promote an anti-tumor response, providing potential therapeutic effects for patients with GC (10). In addition, CXCL8 derived from tumors can activate endothelial cells in tumor vessels, promote angiogenesis, and induce neutrophil chemotaxis to allow immune cell infiltration into the tumor site (21,22). Therefore, CXCL8 can both promote the invasion and migration of cancer cells and induce macrophages to secrete additional growth factors, both of which further increase the proliferation and invasion rate of cancer cells. Therefore, inhibition of CXCL8 in the tumor microenvironment has significant potential for tumor treatment (23).

This study has some limitations. First, the TCGA and Oncomine databases provide data at the RNA level, which may not accurately reflect protein expression demonstrated by traditionally pathological IHC. Therefore, the bioinformatics data shown in this study cannot fully represent the actual protein expression of CXCL8. The clinical value of CXCL8 in GC should be analyzed using IHC in future studies. Secondly, this study mainly excavates the related data and analysis based on the information provided by online databases; thus, our conclusion needs to be further validated using relevant, actual clinical research results. Despite these limitations, we believe our work provides complementary evidence on the potential use of CXCL8 for diagnosis and prognosis prediction of GC patients, as well as targeting CXCL8 for GC therapy.