PD-1 is a negative co-stimulatory receptor expressed mainly on activated T cells, which downregulates excessive immune responses by binding to its ligands, PD-L1 and PD-L2 (10,11). PD-L1 is constitutively expressed in various tissues and in different tumor types including gastrointestinal cancer (12). PD-L1 expression in tumor tissue was related to anti-PD-1/PD-L1 response (12-14). Based on the results of KEYNOTE 059 study (15), Food and Drug Administration (FDA) granted accelerated approval to Pembrolizumab (Merck & Co., Inc., USA) for patients with unresected advanced/metastatic gastric or gastroesophageal junction adenocarcinoma whose tumor express PD-L1 as determined by an FDA-approved test.

Molecular analyses are typically performed on tissues at initial diagnosis (16). However, in some cases, metastatic tumors have different molecular alterations from primary tumors (17,18). PD-L1 expression level in tumor tissue is also affected by the timing of biopsy, composition of tumor tissues, cancer treatment or host immune response (19-21). Hence, a dynamic reassessment of molecular alteration might help to optimize treatment. However, serial biopsies are not practical in practical clinical activity. Soluble PD-L1 (sPDL1) is thought to be a circulating biologically active protein which is released from PD-L1-positive tumor cells or immune cells, and binds to PD-1 receptor which contributes to systemic immunosuppression (22,23). The sPDL1 expression status has been reported to be an independent prognostic factor in various malignant tumors (24-29). In these circumstances, dynamic assessment of sPDL1 expression of metastatic gastrointestinal cancer is considered as a potential strategy with more precise clinical application.

However, the prognostic value of baseline serum sPD-L1 level in gastrointestinal cancer patients remained debate (28,30). The relationship between dynamic change of serum sPD-L1 level and treatment response to chemotherapy has not been investigated. Thus, a prospective cohort study was conducted to investigate the prognostic or predictable value of serum sPD-L1 baseline level and its dynamic change for metastatic gastrointestinal cancer patients.

Patients continued chemotherapy until disease progression or intolerable toxicity. Response evaluation was performed every 6 or 8 weeks by contrast-enhanced CT or MRI.

Blood samples, before initiating first-line chemotherapy and within 48 h before response evaluation, was drawn into Serum Separation Tubes with polymer gel/silica activator. According to standard operating procedure, serum was prepared within 1 hour of sample collection after centrifugation (1,000 ×g) for 20 min and immediately stored at –80 °C. In our study, the blood routine, biochemical test and blood samples in peripheral vein blood were detected or collected at the same time before treatment, CT or MRI response evaluation was taken simultaneously.

Serum sPD-L1 levels were measured by a commercially available enzyme-linked immunosorbent assay (ELISA) kit (USCN, Wuhan, China, catalogue: SEA788Hu). ELISA was conducted as follows: (I) according to the manufacturer’s instructions, all chemical agent, standard dilutions, and specimen were prepared; (II) added 100 µL of the standard and sample to each well; (III) covered the plates with a plate sealer and carefully placed at 37 °C hatched for 120 min; (IV) after this step, added 100 µL of detection reagent A (1:100) to each well, and re-sealed the plates and hatched at 37 °C for another 120 min; (V) each well was washed four times by wash buffer after aspirated; (VI) added 100 µL of detection reagent B (1:100) to each well, and re-sealed the plates were and incubated for 30 min at 37 °C; (VII) washed each well five times after aspirated, added 90 µL of substrate solution, and the plates were newly sealed and incubated in a dark room for 20 min at 37 °C; (VIII) added 50 µL of stop solution to each well, and measured absorbance at 450 nm immediately in Bio-Tek EPOCH2 Microplate Reader (Bio-Rad Laboratories, USA).

Progression-free survival (PFS) was defined as the time from initiation of first-line treatment to disease progression or death without evidence of progression. The prognostic factors of PFS were analyzed by univariate analysis. Continuous variables were summarized using ± s and median (range). The χ2-test was used to explore the associations between sPD-L1 expression/sPD-L1 change and clinical characteristics. Differences in the distribution of more than two variables were evaluated by the Kruskal-Wallis test Means between two unrelated groups on sPD-L1/sPD-L1 change was examined by independent samples t-test.

All procedures conducted in this study were conformity with the ethical standards of the institutional research committee and with the Helsinki Declaration and its amendments in 1960s. This research protocol was approved by the ethics committee of Sun Yat-sen University Cancer Center. 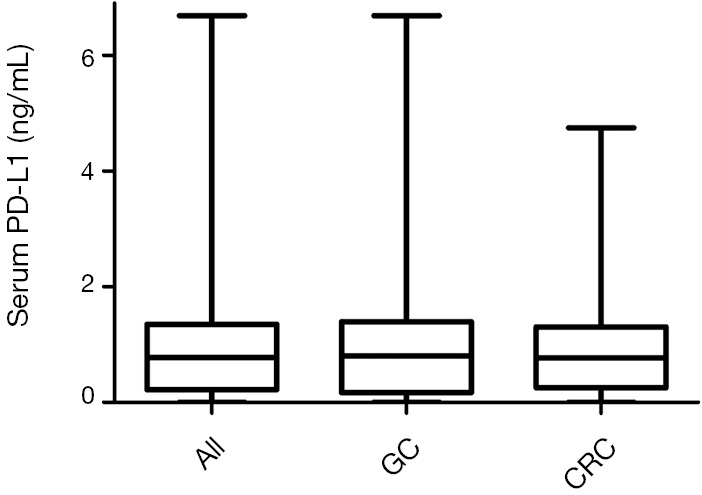 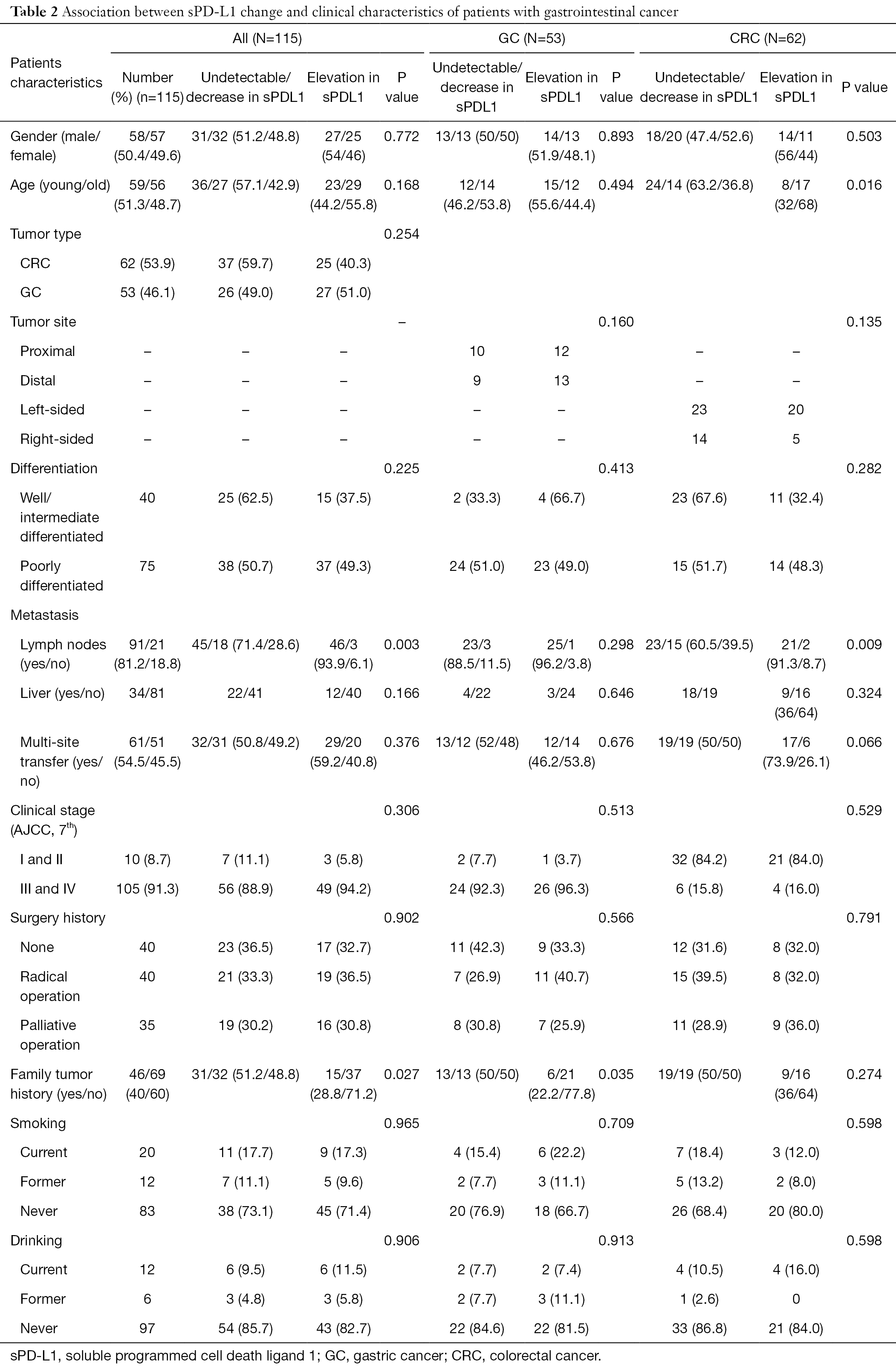 Correlation of sPD-L1 expression with response to chemotherapy 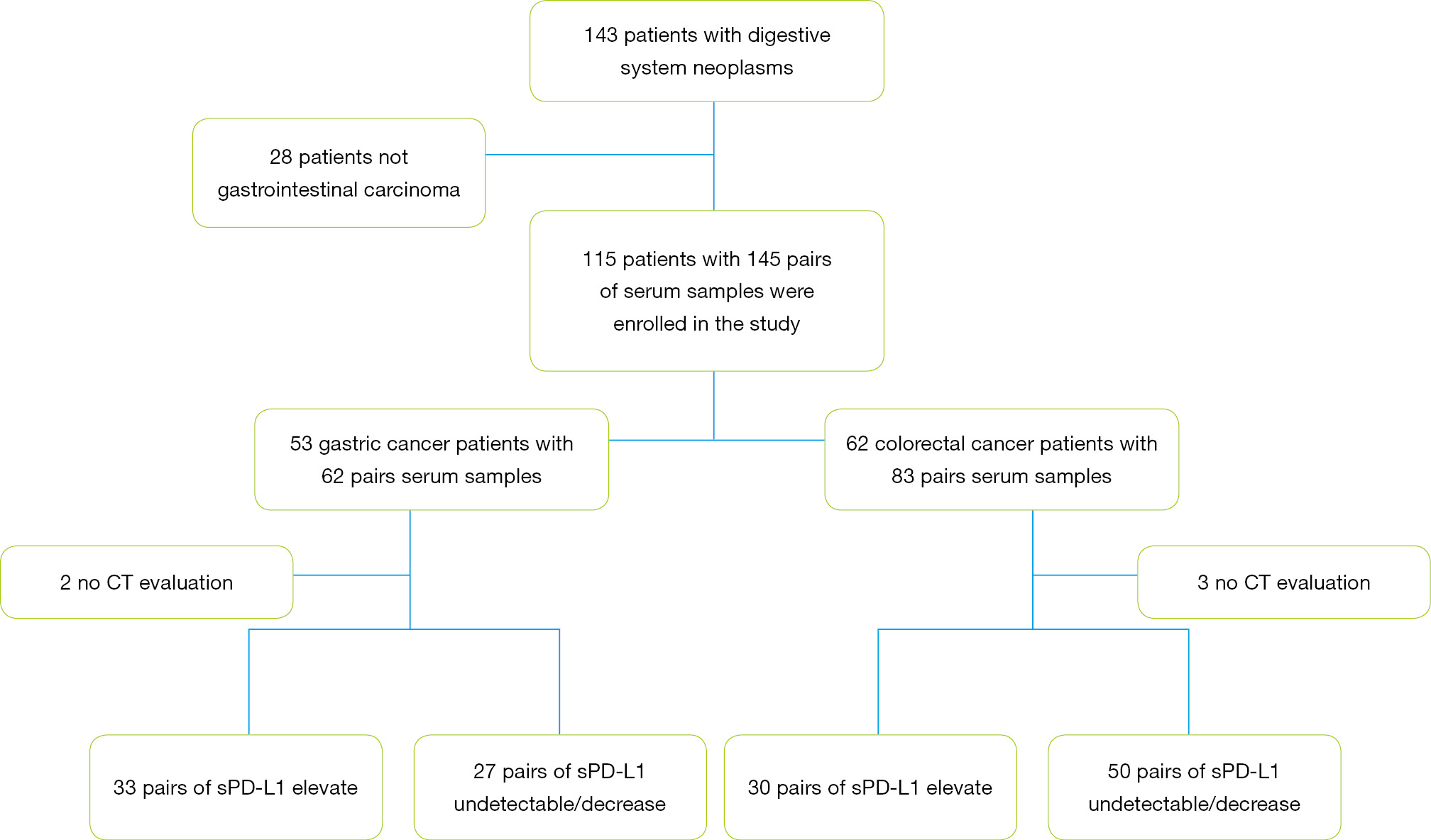 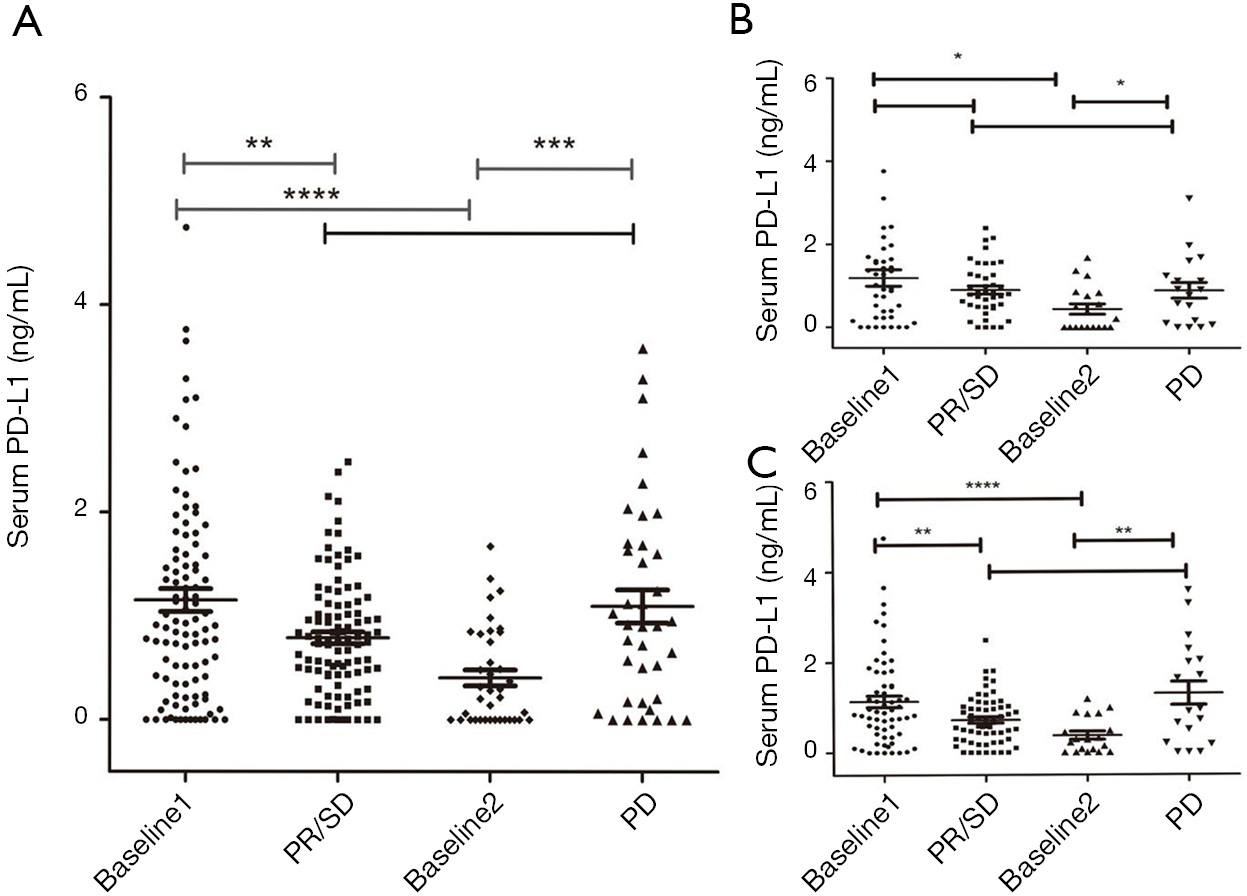 Correlation between the changes of sPD-L1 during chemotherapy and treatment response was assessed in the 145 pairs data (Figure 4). Sixty-six pairs of sPD-L1 value were elevated during chemotherapy. Corresponding evaluation of curative effect, PD was found in 29/66 cases, and PR or SD in 34/66 cases. While among 79 pairs with declining sPD-L1 during anticancer treatment, PD was observed in 9/79 cases, and PR or SD in 68/79 cases (P=0.000005). In the follow-up courses, serum sPD-L1 values of patients with PR or SD were constantly decreasing compared with increasing in patients with PD. 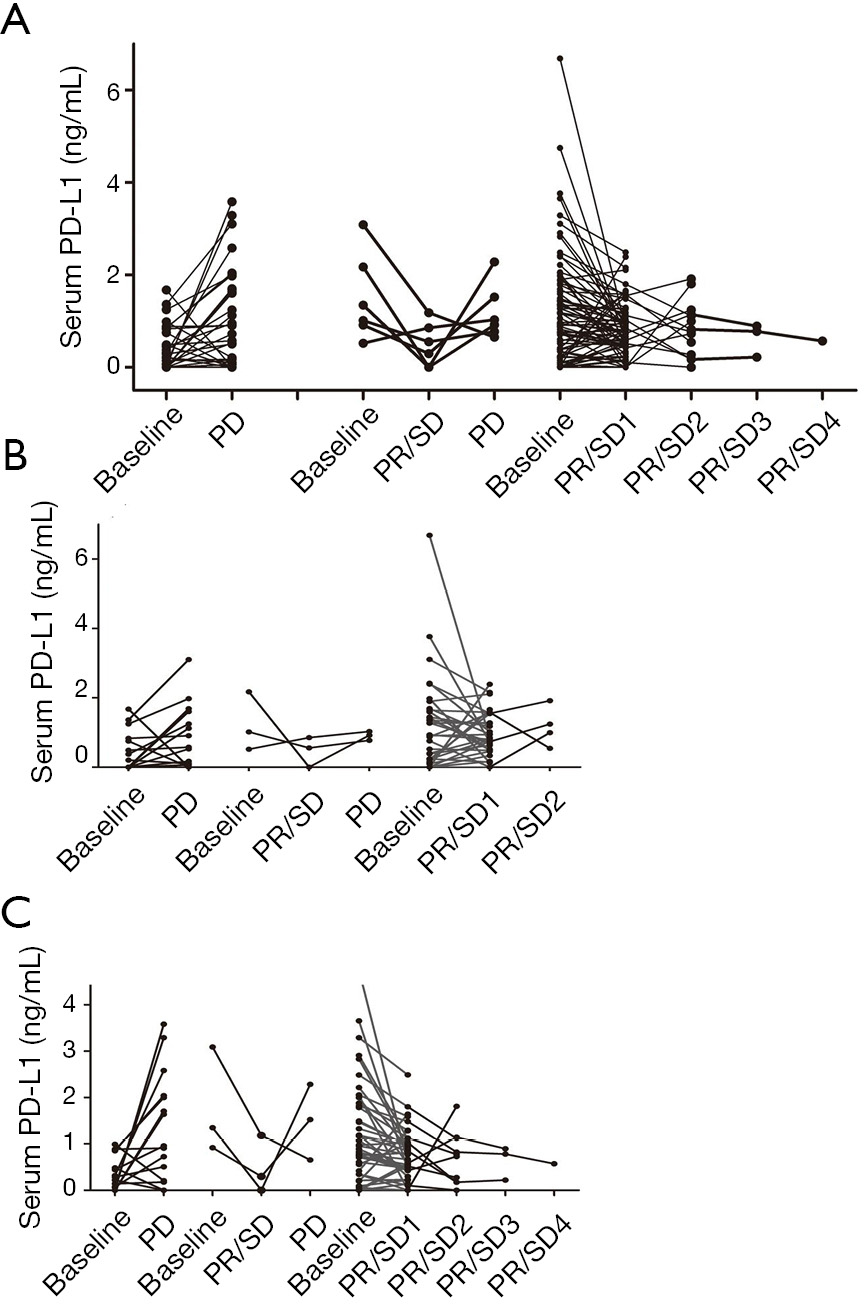 Figure 4 Dynamic changes of individual sPD-L1 levels with corresponding chemotherapy treatment evaluation. This picture illustrated changes in the levels of PD-L1 expression according to different treatment outcome. The same patient at different points of time were recorded. sPD-L1 decreased/stable in serum after effective treatment and sPD-L1 elevated during PD. (A) showed the results in all our study population, (B) showed the results in GC and (C) was in CRC. sPD-L1, soluble programmed cell death ligand 1; PD, progressive disease; PR, partial response; SD, stable disease; CRC, colorectal cancer.

Median PFS for the whole study population was 11.1 (range, 1–72) months, with a median follow-up of 16.1 (range, 2–81) months. In cox proportional hazards model, variables showing tendencies for positive association with PFS in univariate analysis were selected. As shown in Table 3, the patients with advanced tumor stage, tumor diameter >5 cm or with multiple metastases (≥2) had shorter PFS. 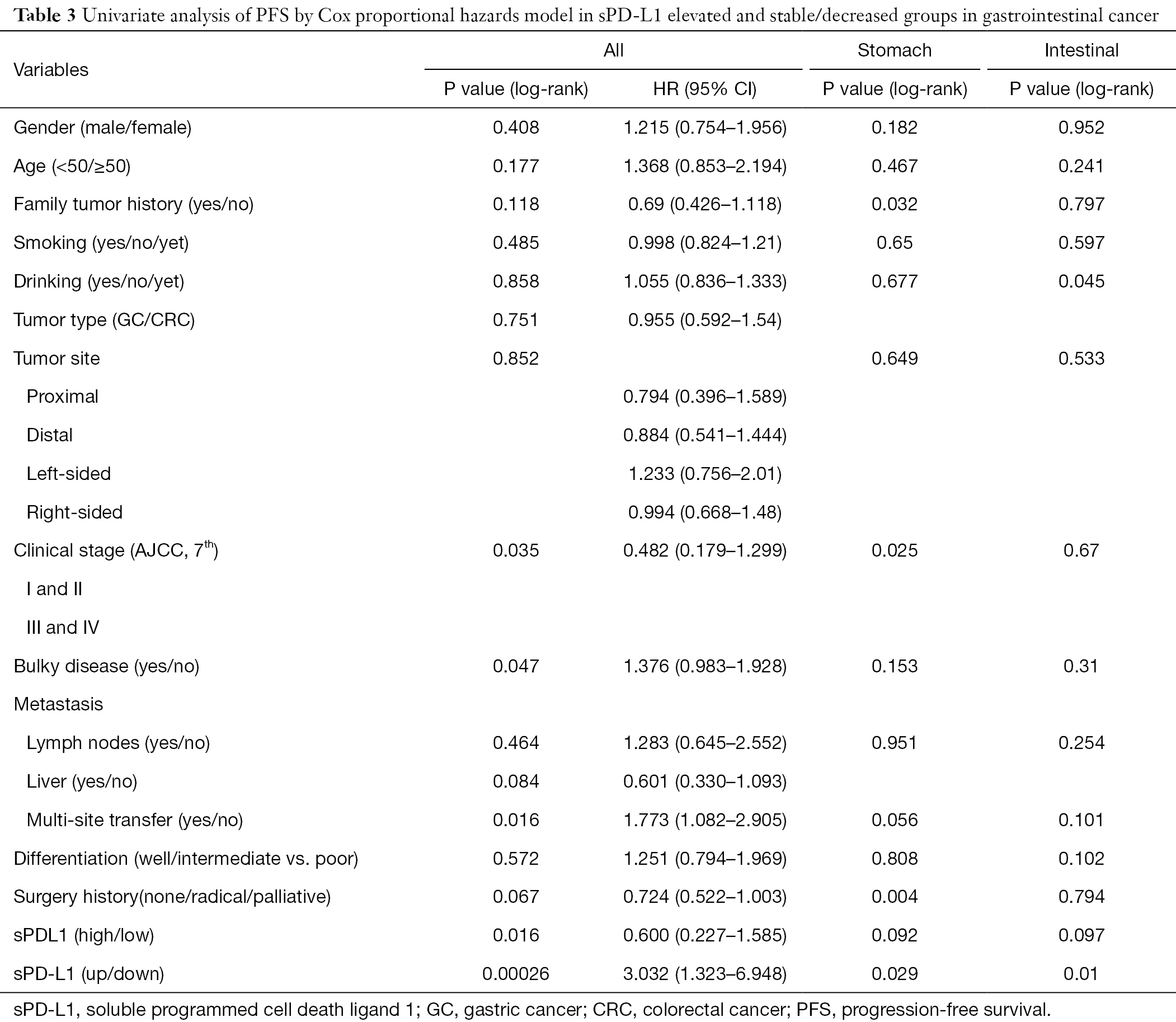 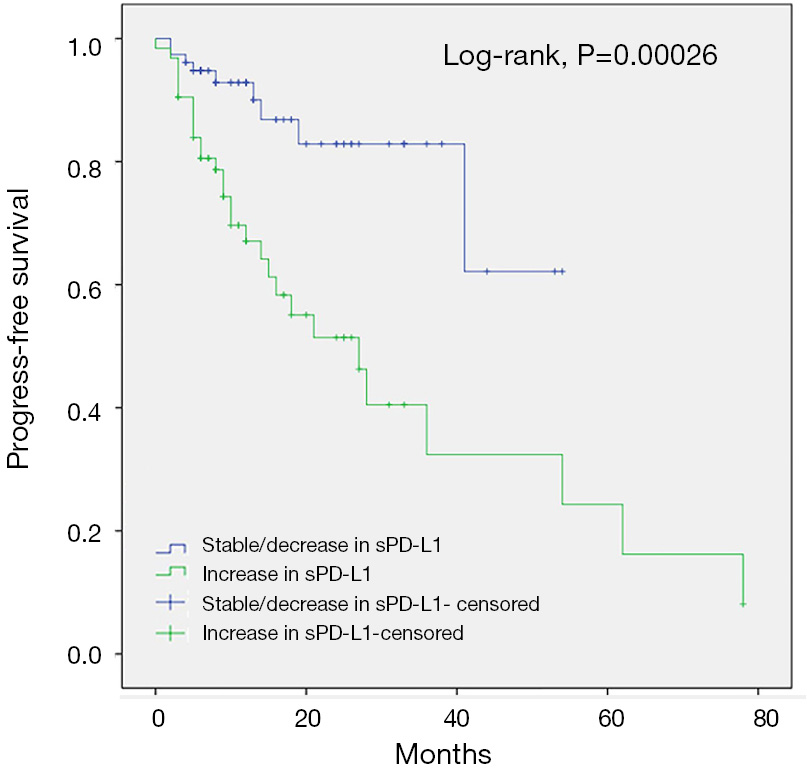 Biomarker-driven selection of immunotherapy responders and non-responders would minimize unnecessary exposure of patients to potentially immune-related toxicities. As anti-PD-1 pathway immunotherapies are effective in only a minority of gastric-intestinal cancer patients, there is a great need for reliable and easily available biomarkers of patient response. PD-L1 expression appeared to correlate with response to treatment from exploratory analyses of early reported trials, whether the level of expression of PD-L1 predicts response rate, PFS and OS in the context of anti-PD-1/PD-L1 therapy were explored in multiple malignant tumors with inconsistent results. sPD-L1 being released from immune cells or tumor cells can bind receptors in a similar manner as their membrane-bound counterparts and as a result may play a more widespread role in PD-1/PD-L1 axis. This study measured the baseline level of circulating sPD-L1 and dynamical change of sPD-L1serum level during treatment. No study has been reported to identify circulating sPD-L1 expression in patients with CRC until now. It is the first report to evaluate the relation between the baseline expression and dynamic change of sPD-L1 expression in metastatic gastrointestinal cancer and their prognostic or predictable value.

The mean value of sPD-L1 level was 0.937±0.945 ng/mL in GC group. Our data on GC was slightly higher than those reported in previous studies, the median sPD-L1 level was 0.704 ng/mL in Japanese GC population and 0.8928 ng/mL in northern Chinese GC population, respectively (28,30). Different study population, treatment stage of specimen collection and various test methods may contribute to the differences. Patients with liver metastasis had higher sPD-L1 level in whole study population and patients with mCRC. In the subgroup analysis, patients with mCRC whose family tumor history were more likely to have higher sPD-L1level and patients with right-sided CRC tended to have higher sPD-L1 level. It is well-known that right-sided colon with mucosal immune cells had stronger immunogenicity than left-side colon (8,31,32). There is more common MSI-H tumor in the right-sided colon. The proximal colon cancer shows worse OS than the distal CRC (33). The older CRC patients tended to have sPD-L1 level elevated in our study. Previous study reported that sPD-L1 levels increased in an age-dependent manner in health donors, which suggested that serum sPD-L1 was related to the immune state of human being (20). sPDL1 was thought to be released from PD-L1-positive tumor cells or immune cells and can functionally binds to PD-1 receptor then contributed to systemic immunosuppression (23,29). In clinical research, sPD-L1 could found functionally block the regulatory effect of membrane-bound PD-1 on T cell activation in Rheumatoid Arthritis (34). Serum sPD-L1 levels significantly increased in dying septic patients compared with the survivors (P<0.05) (26). In melanoma, both tumor PD-L1 and macrophage PD-L1 expression level after effective treatment were higher than intra-tumoral CD8+ lymphocytes and CD68+ macrophages in biopsies (35).

In our study, higher baseline sPD-L1 levels were more likely to response to chemotherapy and had better PFS. However, the clinical significance of sPD-L1 remains controversial in different tumor types. Several studies showed that high level of sPD-L1 was a negative prognosis factor, indicating lower overall response rate, shorter PFS and shorter OS (24,29,36-38). In NSCLC patients, high sPD-L1 level was significantly related to abdominal organ metastasis (P=0.004) (39). On the contrary, sPD-1/sPD-L1 levels did not appear an unfavorable outcome in advanced pancreatic cancer (40) and the author thought sPD-L1 levels may reflect inflammatory tumor type in PC patients. Zheng found that in advanced GC patients high sPD-L1 correlated with better OS (30). There were three main anticancer immunity phenotypes: the immune-desert phenotype, the immune-excluded phenotype and the inflamed phenotype. Inflamed tumors were infiltrated by a number of subtypes of immune cells. Tumor cells in inflamed tumors can express inhibitory factors, down-regulating MHC class I molecule and other pathways can de-sensitize them to anticancer immunity (31) Clinical responses to anti-PD-L1/PD-1 therapy occur most often in patients with inflamed tumors (31). Finkelmeier found that in HCC sPD-L1 levels showed correlation with C-reactive protein, a typical inflammatory maker (24). Okuma inferred that sPD-L1 levels might be determined by both tumor burden and extra-tumoral inflammatory statue (29). We hypothesis that high sPD-L1 may be released by infiltrating immune cells and tumor cells, which indicate an immune-inflammatory state with better treatment outcome.

We can infer that dynamic monitor of sPD-L1 level may be used as a response predictor of chemotherapy in metastatic or recurrent gastrointestinal cancer. It is firstly reported. In our study, the patients with dynamic increase of sPD-L1 level had markedly poorer response to chemotherapy than the patients with stable or decreasing change of sPD-L1. People who got PR/SD showed a decrease/stable trend of sPD-L1 level, however, a significant increase of sPD-L1 level was found once disease progression. sPD-L1 in blood circulation can be released by antigen-presenting cell like activated mature dendritic cells or PD-L1 positive cell lines like tumor cells and bind to PD-1 receptor. We hypothesized that sPD-L1 level in blood circulation was a dynamic balance system. In pre-treatment patients, sPD-L1 is mostly released by infiltrating immune cells reflecting an immunoinflammatory state and after chemotherapy, tumor cells could be active by gene mutation and more sPD-L1 was released to escape immune surveillance which results in T cell exhaustion and dysfunction timely to avoid excessive immune damage and hold self-balance. Once disease progressed, tumor burden increased with more sPD-L1 released by tumor cells, it becomes a vicious cycle.

Our study comes with some limitations. It was a single center study. Health controls are needed to be involved to estimate sPD-L1 levels between different populations. Individuals with different digestive cancer were involved. The follow-up during was not long enough.

Conflicts of Interest: All authors have completed the ICMJE uniform disclosure form (available at http://dx.doi.org/10.21037/tcr.2020.03.23). The authors have no conflicts of interest to declare.

Ethical Statement: The authors are accountable for all aspects of the work in ensuring that questions related to the accuracy or integrity of any part of the work are appropriately investigated and resolved. This study is approved by the Ethics Committee of Sun Yat-Sen University Cancer Center (No. GZR2016-017). Informed consent was obtained from all individual participants included in the study.