Clinical oncology has already entered the era of personalized medicine or precision medicine, which needs right drug for the right patient at right time especially in targetable cancers harboring driver genes like EGFR, ALK and ROS1, etc. (1,2). Since the proposal of “precision medicine” plan in 2015 by US president Obama, next generation sequencing (NGS) develops quickly and has been applied extensively as a novel genetic screening and diagnostic technique for clinical detection. Its genetic characteristics for disease detection have become an important part of modern precision medicine (3-5). NGS has become an effective and acceptable method for clinical gene detection (6,7). Although it is still in the early stage of clinical application for the diagnosis and treatment of tumors (8-10), its continuous innovation had accelerated the people’s cognition on genetics markers and the molecular mechanisms of diseases. Genome alterations play a significant role in disease development and progression a management by predictive and biomarkers, identifying clinical decision making of targeted therapy. The initial sample of NGS can be genomic DNA (gDNA) or circulating free DNA (cfDNA). Liquid biopsy refers to targetable alterations or other biomarkers using circulating material like cfDNA, CTC and CSF, etc. (11,12). Given that many clinically relevant biomarkers continue to be identified, and targeted drugs are developed for personalized treatment, multigene mutation screening will be a requirement in routine clinical practice (13). Genetic mutations can be detected by Sanger sequencing, gene chips, super ARMS, digital polymerase chain reaction (PCR), FISH and immunohistochemistry (IHC). However, these method presents several limitations. For instance, all the methods can only detect genetic mutations that have been found of very few numbers of genes. A large number of genetic variants that may be related to the disease can not be detected. Therefore, a multigene detection method that is suitable for Chinese lung cancer patients should be established.

Briefly, the motivations of developing this new method are as follows: (I) NGS can simultaneously interrogate multiple gene mutation loci, which are screened for in-routine clinical practice. (II) Tissue specimens and nucleic acids are not enough to used for an analysis of multiple genes one after another. However, NGS method can reduces the amount of the clinical sample used. (III) Some novel molecular targets of Chinese lung cancer patients can be enrolled in the new method. (IV) The NGS method can detect a variety of genetic variants, such as single nucleotide polymorphism (SNP), InDel, Fusion and copy number variation (CNV).

We developed this customized NGS to detected a total of 285 cancer related genes and applied to cell lines and clinical specimens for the validation of its performance.

We present the following article in accordance with the STREGA reporting checklist (available at http://dx.doi.org/10.21037/tcr-19-2855).

We used four NSCLC cell lines (i.e., H1650, H1975, A549 and H1299) that were selected from the cell bank of Guangdong Lung Cancer Institute (GLCI) for LoD (limit of detection) analysis of serial dilution of gDNA of these cells at 1:1, 1:5, 1:10 and 1:100. Twenty-four tumor tissues and 1 plasma was collected from the GLCI of Guangdong General Hospital between January 2015 and December 2016. All tissues samples were stored at –80 °C after being frozen in liquid nitrogen, were routinely assessed by pathologists to ensure that >20% tumor contend in each sample to be tested by NGS. The trial was conducted in accordance with the Declaration of Helsinki (as revised in 2013). The study was approved by the ethics committee of Guangdong Provincial People’s Hospital [No. GDREC2015360H(R2), GDREC2016316H(R1)]. All patients were well informed and signed the informed consent.

Design of a panel of targeted 285 genes

Search for the latest literatures by retrieving the PubMed database, comparing with the information of gene mutation in databases like DrugBank, COSMIC, dbSNP, OMIM, ClinVar, 5,000 exomes and 1,000 genomes. A total of 285 genes related to lung cancer pathogenesis, chemoradiotherapy, targeted drug resistance and metastasis were determined and included as a set for probe library design and target sequencing.

The targeted hybridization probes library of 285 genes were designed using SureDesign software web site based on genome hg19/GRCh37 (https://earray.chem.agilent.com/suredesign/index.htm). Runned the software, introduced the 285 gene list and adjusted the parameters such as databases, target region, region extension and allow synonyms. The total length of target capture sequence was 0.967 Mb. All the 4,700 exon loci of the 285 genes were included in the probe design kit. Each probe kit contains 16 tests as requested by ourselves. The designed gene hybridization probe was synthesized by the Agilent company.

SureSelect Target Enrichment System for Sequencing on Ion-Proton was used according to the manufacturer's protocol. One library was included in a single capture hybridization. Following hybrid selection, the captured DNA fragments were amplified with 9 to 11 cycles of PCR using 5× Herculase II Rxn Buffer and 2 µL SureSelect PTN PCR primer mix and 1 µL Herculase II Fusion DNA Polymerase in 50 µL reactions. Multiplexed libraries were mixed by 5 libraries with 20 µL of 12 pM and were sequenced using Ion PI Sequencing 200 Kit v2 runs on the Ion-Proton.

Upon sequence completion, the sequencing data were mapped to the hg19 reference genome with the Suite software (Life Technologies, version 5.0.2), and mutations were Called with the Variant Caller software (Life Technologies, version 5.0.2.1), and the VCF files was producted at the same time. The VCF files was uploaded to the Ion Reporter cloud analysis platform (Life Technologies, https://ionreporter.lifetechnologies.com), and gene mutation informations were annotated by the Ion Reporter with a series of filters. The variant filters include minimum quality, minimum coverage, maximum strand bias, maximum variant signal shift and so on. Integrative Genomics Viewer (IGV) software was applied by researchers to annotate the gene mutation information by comparing with the databases DrugBank, COSMIC, dbSNP, OMIM, ClinVar, 5,000 exomes and 1,000 genomes.

Selection of 285 genes as a testing panel

We check the cancer gene census through literatures and make a list of 285 genes including those common genes in lung cancer to be tested by NGS. We tested 4,700 regions in these 285 target genes, which were closely related to the pathogenesis, drug resistance, and metastasis of lung cancer and associated with relevant transduction pathways. The targeted 285 genes are listed in Figure 1. 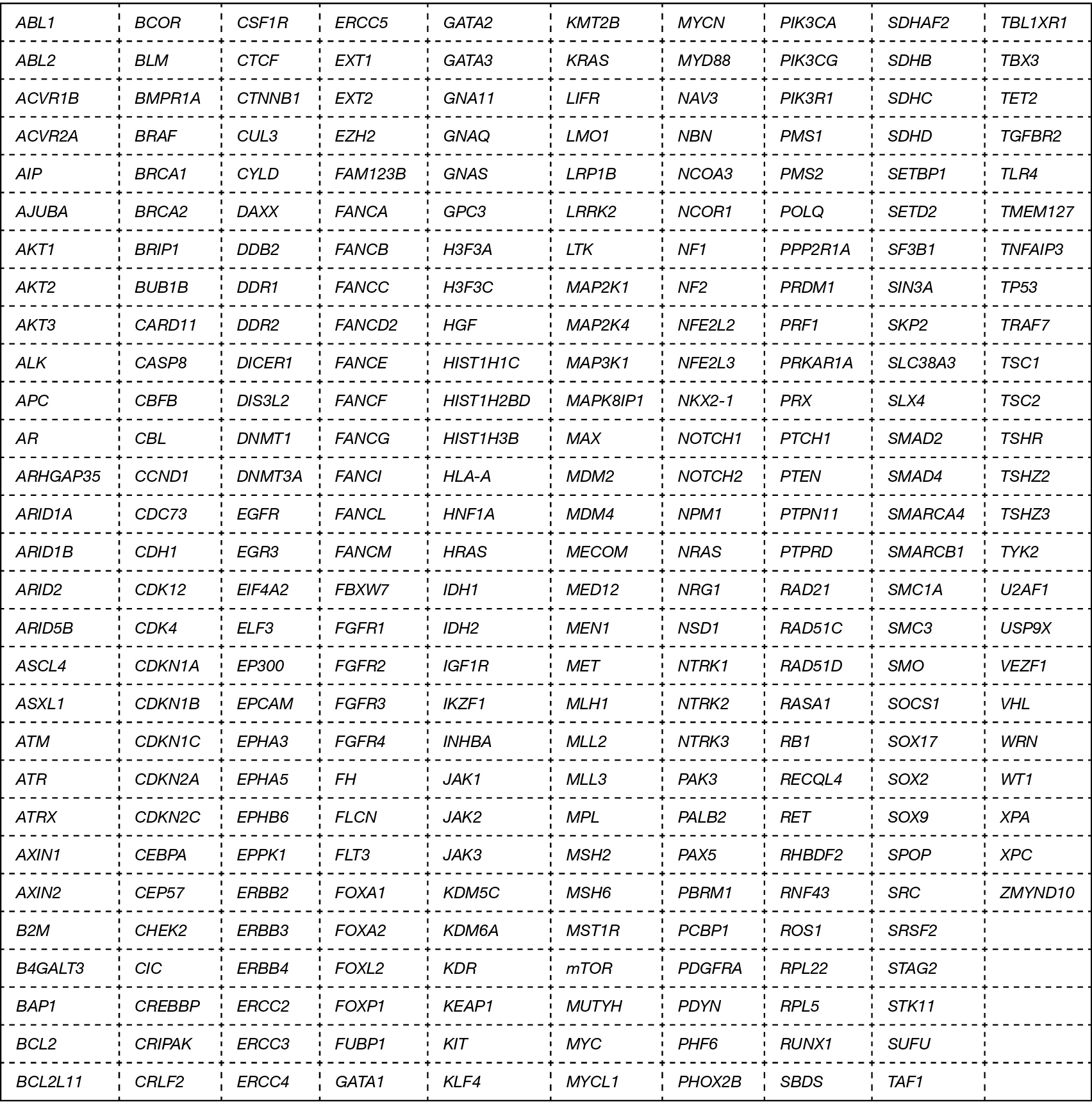 Figure 1 A panel of 285 genes for the capture system.

Establishment and validation of the customized NGS test in cell lines

The detection method used with the SureSelect target enrichment system for sequencing kit was established by analyzing four cell lines of lung cancer. The results from the newly established method were consistent with the previously reported mutations in cell lines. All the results were confirmed by Sanger sequencing, and the sequencing results are shown in Figure 2. The detailed mutation sites within genes and proteins are listed in Table 1. For the serial dilution of gDNA of these four cell lines, mutations were successfully detected as shown in Table S1. 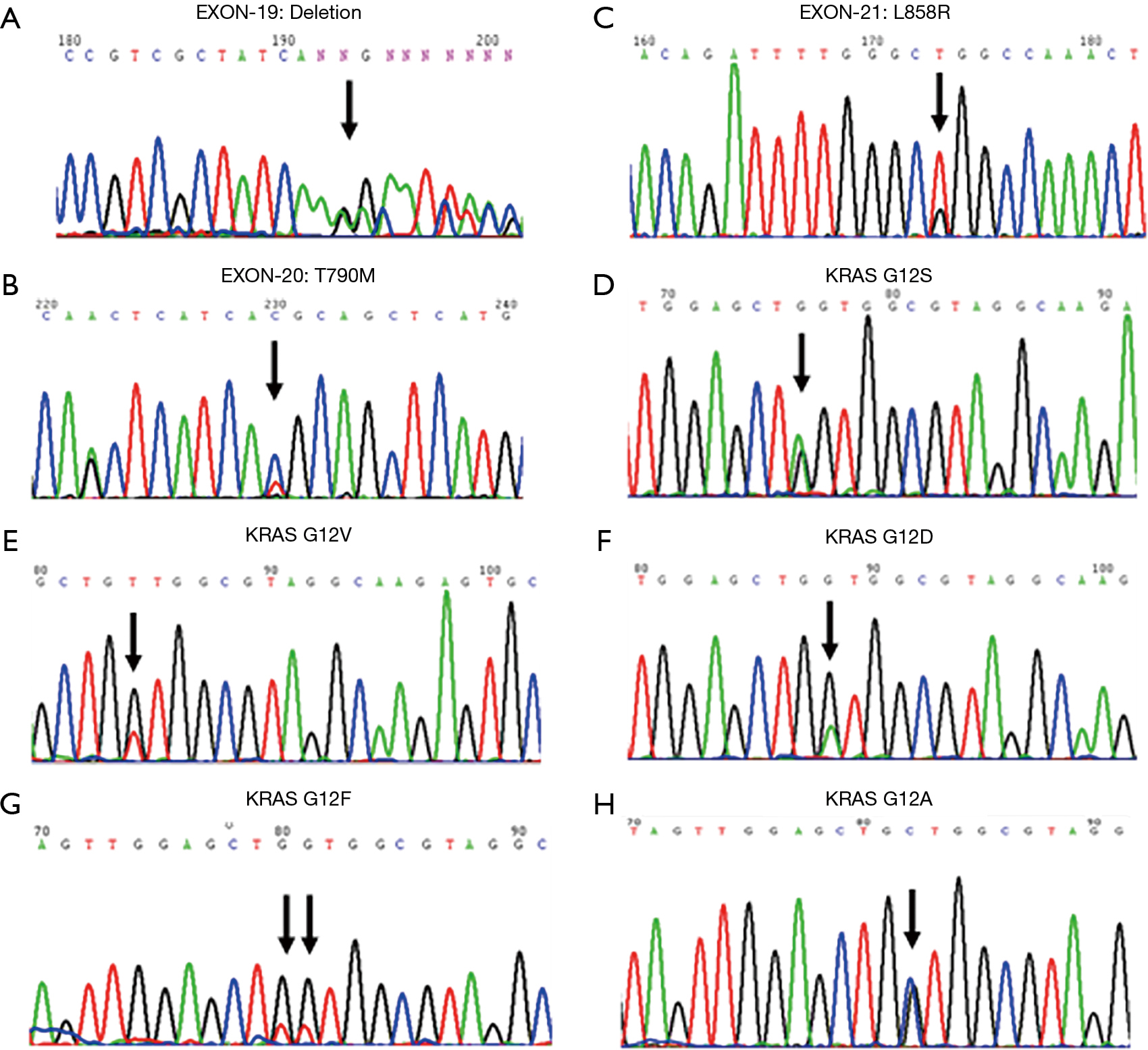 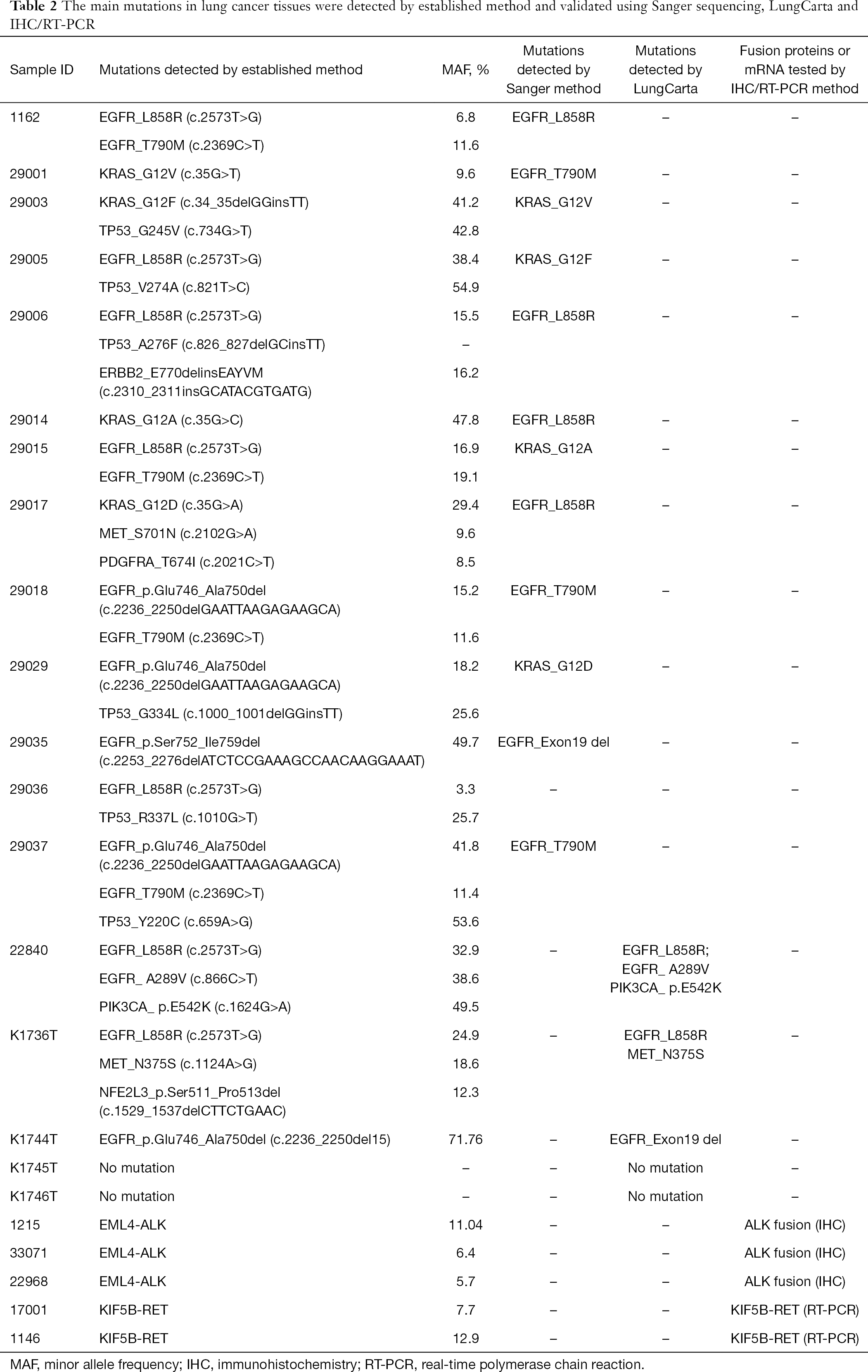 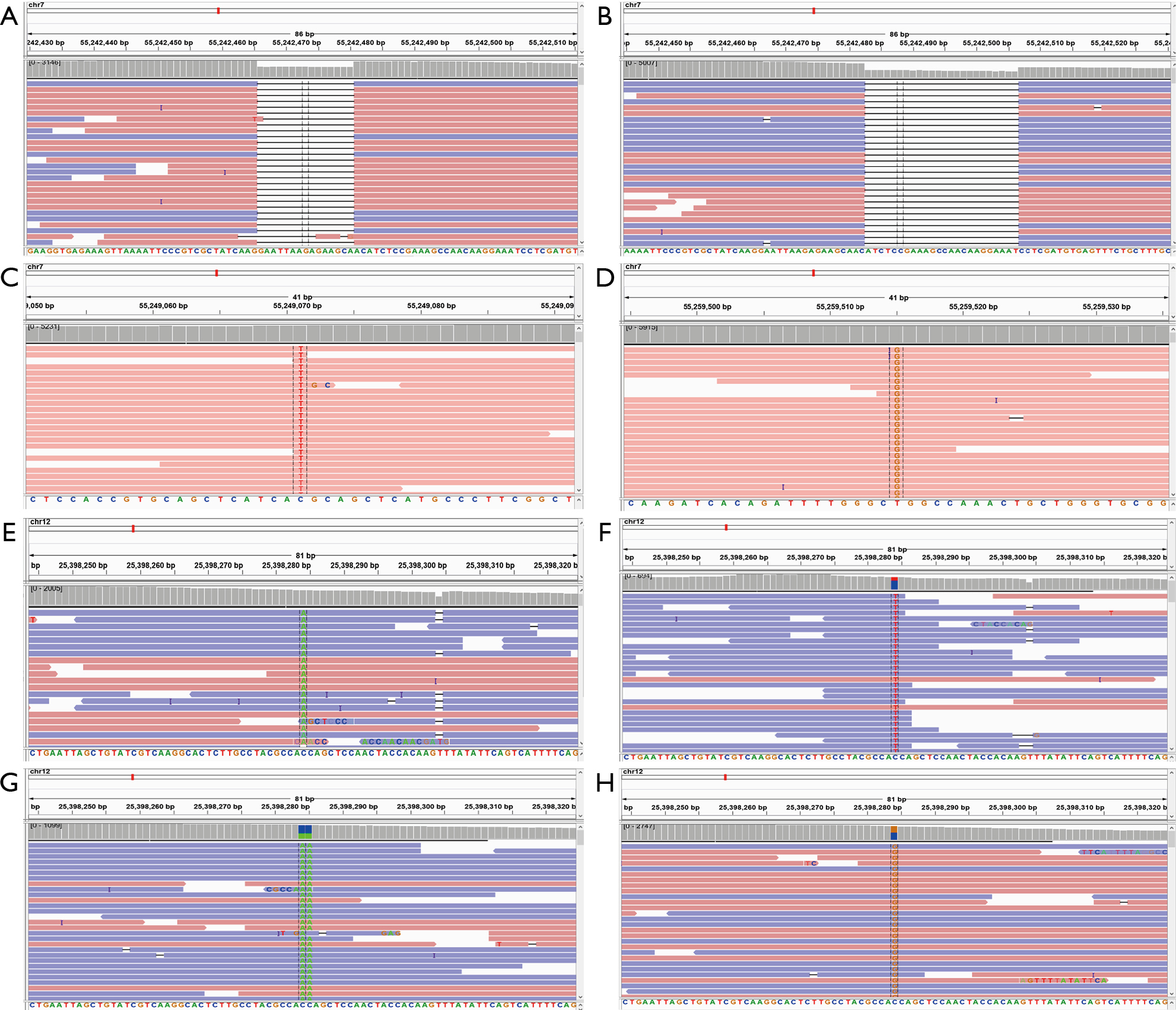 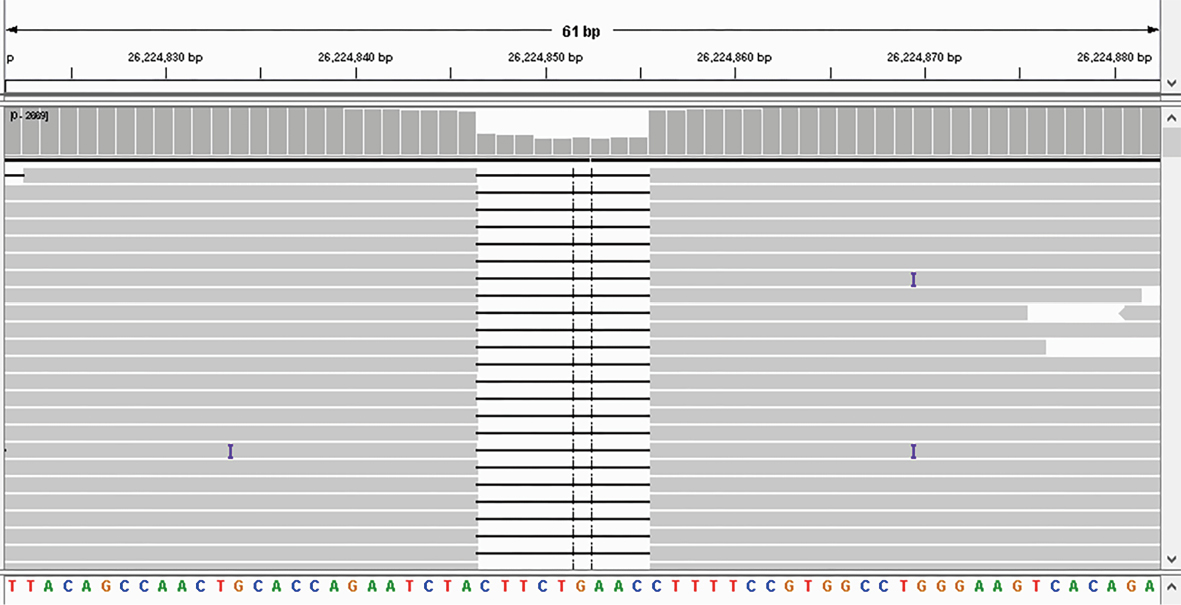 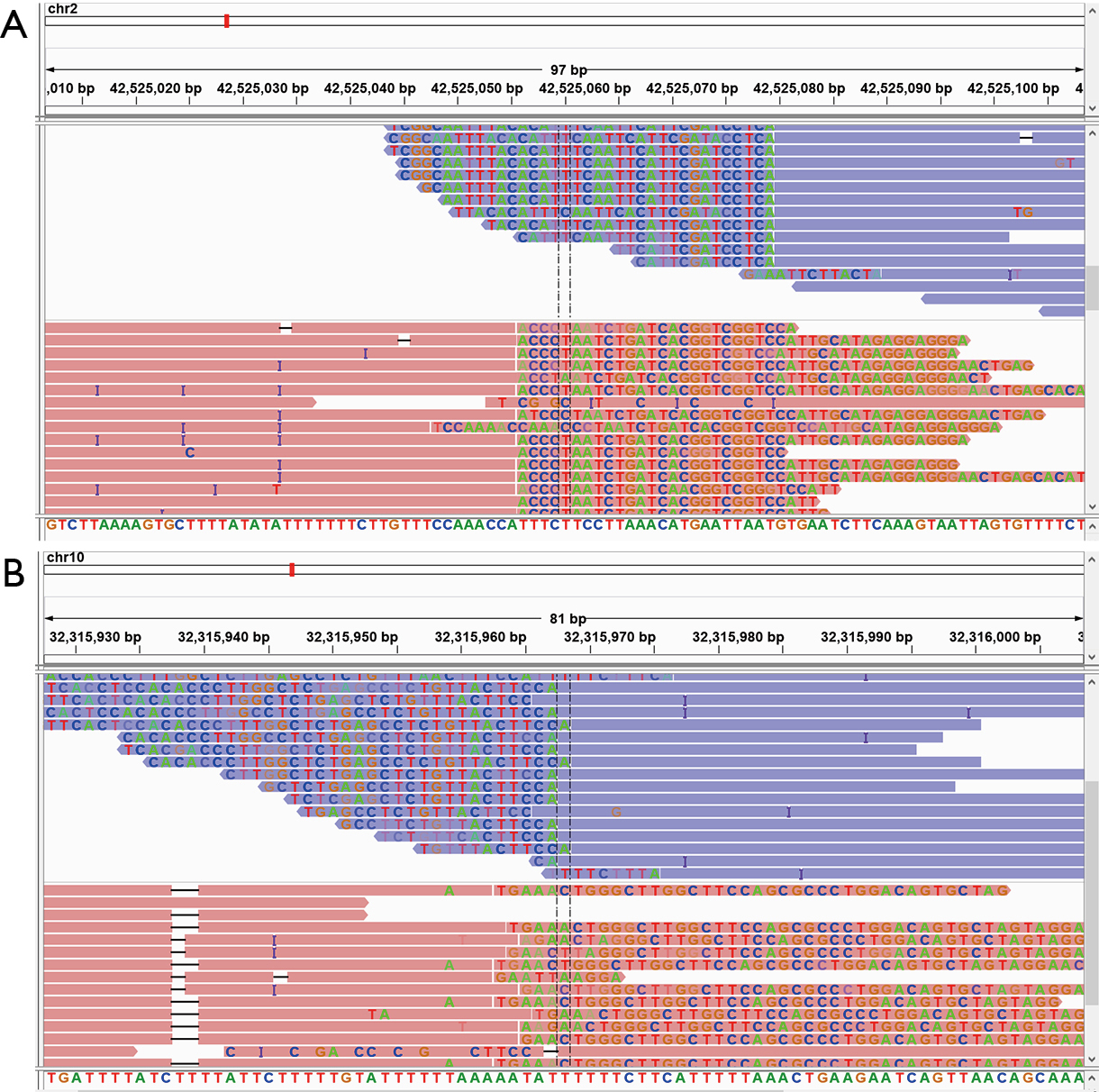 Cancer tissue and blood from a special patient were detected by the established method. The detected results showed that the mutation information of the patient's tissue samples were identical to those in the blood sample. EGFR_T790M and Glu746_Ala750 del (c.2236_2250delGAATTAAGAGAAGCA) and TP53_Y220C (c.659A>G) mutations were detected in cancer tissues and blood. The results are shown in Table 3.

Single-gene detection methods for the molecular classification of lung cancer mainly include Quantitative PCR, Sanger sequencing, fluorescence in situ hybridization, amplification refractory mutation system, digital PCR and IHC. Multiplex genetic mutation-detection method include MassARRAY and gene chip. These methods can only detect the known gene mutations, and they are also expensive and time consuming. Many studies have shown tumors was complex, that tumors are not only associated with single driven gene mutations, but also associated with double or even multiple mutations (14). Considering the limitations of single-gene detection techniques and the complexity and unknowability of tumor driver genes, we need to establish a multiplex genetic mutation-detection method for lung cancer in clinical practice and translational medicine, Such as NGS. NGS has become an effective and acceptable method for clinical gene detection and has been an important molecular diagnostic tool for precision oncology (15,16).

According to the review of the related literature and data on lung cancer treatments, 285 genes were enrolled into the targeted panel. These genes not only include the eight genes which can using the related TKI of FDA-approved, such as EGFR, ALK, KRAS, ROS1, ERBB2, MET, RET and BRAF, but also include many tumor suppressors, such as TP53 gene. So, the established method can not only detect common L858R mutations in EGFR gene, but also detect recent reports of C1156Y, L1196M, F1174L, and G1269S mutations in ALK gene, which was recently reported as the resistance mutations following crizotinib treatment in lung cancer (17,18). The study found established method could detect the mutations verified by Sanger sequencing, also could detect the rare mutation, such as the p.Ser511_Pro513del mutation in NFE2L3 gene, that cannot be detected by the Sanger sequencing and MassARRAY platform. The results suggest that Compared to Sanger sequencing and MassARRAY, the established method has a high detection sensitivity and specificity. It is well known that the detection sensitivity of MassARRAY and Sanger were 1–5% (19) and 5–10% (20), respectively. So, the sensitivity of the established method should be less than 1%, that will be verified by the next phase of the experiment.

The proposed 285 genes-targeted NGS method demonstrates the following advantages: (I) the establishment NGS method can minimizes the weaknesses of traditional single-gene tests, such as time-consuming and tedious procedures and high cost. (II) Given the NGS library was built by a large number of fragmented DNA, theoretically, not only fresh tissue specimens but also formalin-fixed paraffin-embedded (FFPE) specimens, biopsy samples, pleural effusion and plasma could be used for effective detection, which needs further validation. (III) The establishment method can not only detect the known gene mutations, but also can detect the unknowability gene mutations.

Limitations of the study included relatively small sample size, absence of association analysis with clinical therapy. Thus, was provided about how the results of this analysis might affect clinical outcomes. Our study did not systematically measure the turn-around time required for NGS experiments and to annotate, interpret and report NGS results. Future studies will be necessary to address these limitations.

In summary, we have successfully established a customized novel NGS detection method based on Ion-Proton platform, which are able to detect those actionable driver gene mutations, and may significantly reduce the costs of biomarker tests and thus demonstrates a promising potential for personalized treatment.

Reporting Checklist: The authors have completed the STREGA reporting checklist. Available at available at http://dx.doi.org/10.21037/tcr-19-2855

Conflicts of Interest: All authors have completed the ICMJE uniform disclosure form (available at http://dx.doi.org/10.21037/tcr-19-2855). The authors have no conflicts of interest to declare.

Ethical Statement: The authors are accountable for all aspects of the work in ensuring that questions related to the accuracy or integrity of any part of the work are appropriately investigated and resolved. The trial was conducted in accordance with the Declaration of Helsinki (as revised in 2013). The study was approved by the ethics committee of Guangdong Provincial People’s Hospital [No. GDREC2015360H(R2), GDREC2016316H(R1)] and informed consent was taken from all the patients.