Treatment method and prognostic factors of chondrosarcoma: based on Surveillance, Epidemiology, and End Results (SEER) database

Chondrosarcoma is a malignant tumor originating from cartilage tissue (1,2). It is the second most malignant bone tumor, accounting for about 10% to 15% of all primary bone tumors (3-5). The annual incidence of about 200,000 people, accounting for about 20% of bone malignant tumor in the United States (US) (6-9). It can occur at any age, with an average age of onset of 50 years, and more men than women (55%:45%) (10,11). The chondrosarcoma of the axis is most common in the pelvis (12-14). The femur in the long bones of the extremities is most often involved (15,16). Another 10% of chondrosarcoma occurs in soft tissues, mostly mucinous chondrosarcoma.

Chondrosarcoma is characterized by the production of hyaline cartilage by tumor cells, a tumor that is less malignant and slow to grow but is prone to recurrence in the absence of treatment (17). Chondrosarcoma has poor blood supply and lymphatic circulation, and is not sensitive to traditional chemotherapy (CT) drugs and radiotherapy (RT) (18). At present, extensive resection is still the main treatment, and the 10-year survival rate is 30–80% (10). However, with the deepening of research on radiosensitizers and the development of genetic engineering in recent years, many scholars have gradually changed their understanding (19,20). More and more studies have suggested that RT and neoadjuvant CT have certain clinical significance for the treatment of chondrosarcoma (19-21).

So far, there have been no reports of large-scale clinical statistics on the relationship between non-surgical treatment and prognosis in patients with chondrosarcoma. In addition, the incidence of primary bone tumors is significantly less than that of other systems. There are fewer clinical treatment centers specializing in bone tumor research in China, and there is a lack of large-scale clinical statistics. In order to solve the problem of insufficient clinical data, we collected information on patients with chondrosarcoma from the Surveillance, Epidemiology, and End Results (SEER) database managed by the National Cancer Institute. The database contains approximately 30% of the US population’s cancer diagnosis, treatment and survival data, and global oncology researchers have obtained partial data by applying to provide a good source of data for this study (22,23).

This article retrospectively analyzed the data of 1,128 patients with chondrosarcoma in the SEER database to study the patients undergoing surgery, RT and CT. In addition, 9 factors including age, gender, ethnicity, tumor location, tumor size, grade classification, histological type, distant metastasis, and treatment were analyzed to screen out factors affecting prognosis. Provide more direct evidence for the choice of diagnosis and treatment method to achieve the goal of improving the prognosis of patients with chondrosarcoma. We present the following article in accordance with the STROBE reporting checklist (available at http://dx.doi.org/10.21037/tcr-20-357).

SEER*Stat software, version 8.3.6 was used to access the SEER 18 Regs Custom Data (with additional treatment field), Nov 2018 Sub (1973–2016 varying) database using SEER*Stat’s client-server mode. A total of 1,128 patients with chondrosarcoma in the US diagnosed between January 1, 2004 and December 31, 2016. Patients confirmed before 2004 were excluded because demographic and treatment information was incomplete. Patients were excluded if they had unknown survival time, were unknown vital status, were diagnosed at autopsy, or had unknown treatment method.

The clinicopathological data of patients who received/not received surgery, received/not received RT, and received/not received CT were compared by chi-square test. In addition, the chi-square test was used to compare OS and CSSS for each prognostic factor of chondrosarcoma patients. To better set the cut-off value of the continuity variables (age and tumor size), use X-tile software for analysis. Mapping Kaplan-Meier curves for prognostic factors that are significant differences for OS and CSSS in patients with chondrosarcoma. After univariate analysis, the prognostic factors that have a significant effect on the prognosis were included in the multivariate Cox regression analysis, and the independent factors that affected the prognosis were screened. The P value <0.05 was considered to be significant. All statistical analysis is completed by Statistical package for the social sciences (SPSS, version 23.0; IBM Corp., Armonk, NY, USA). 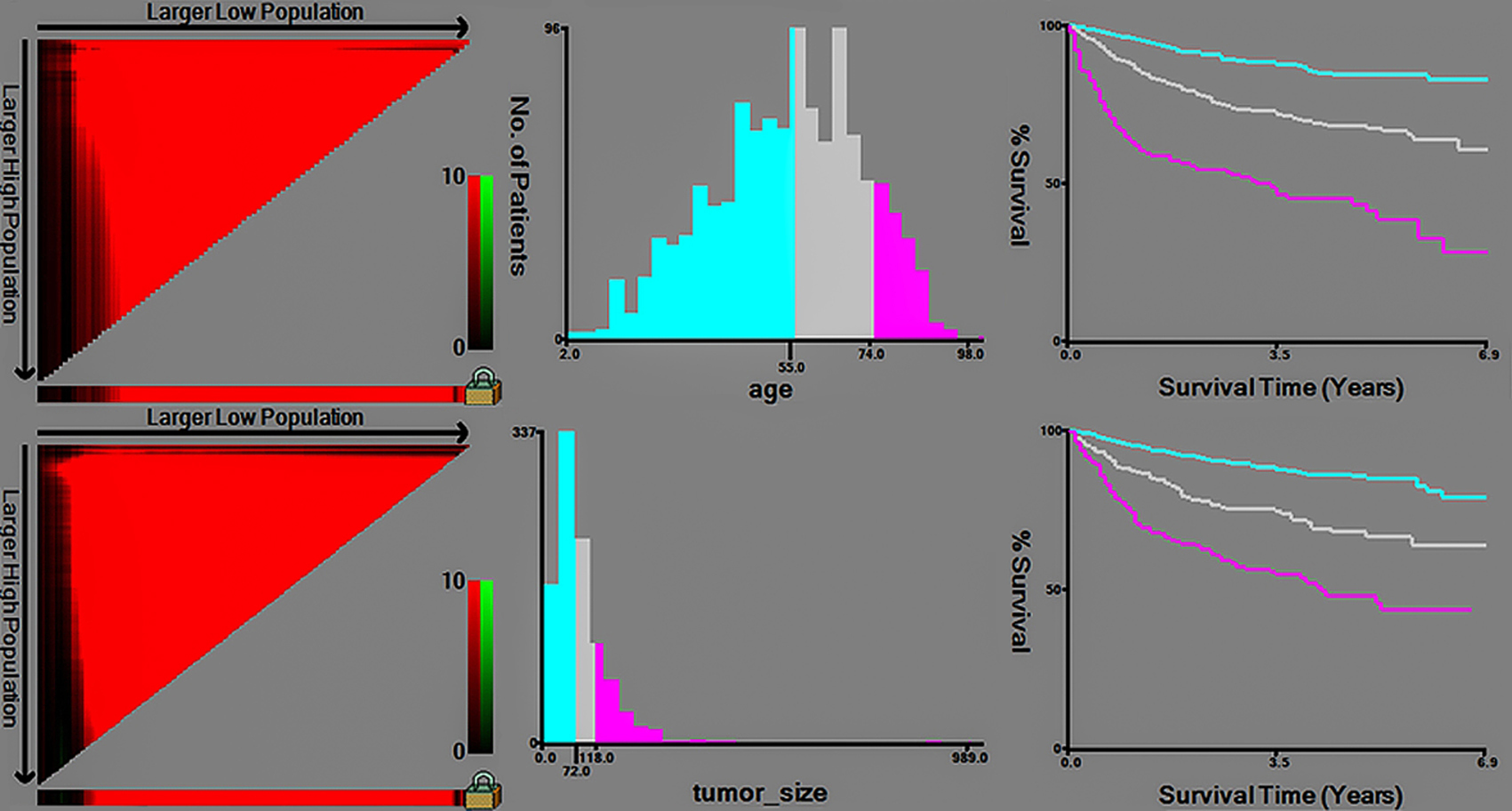 Clinicopathological features of patients with chondrosarcoma 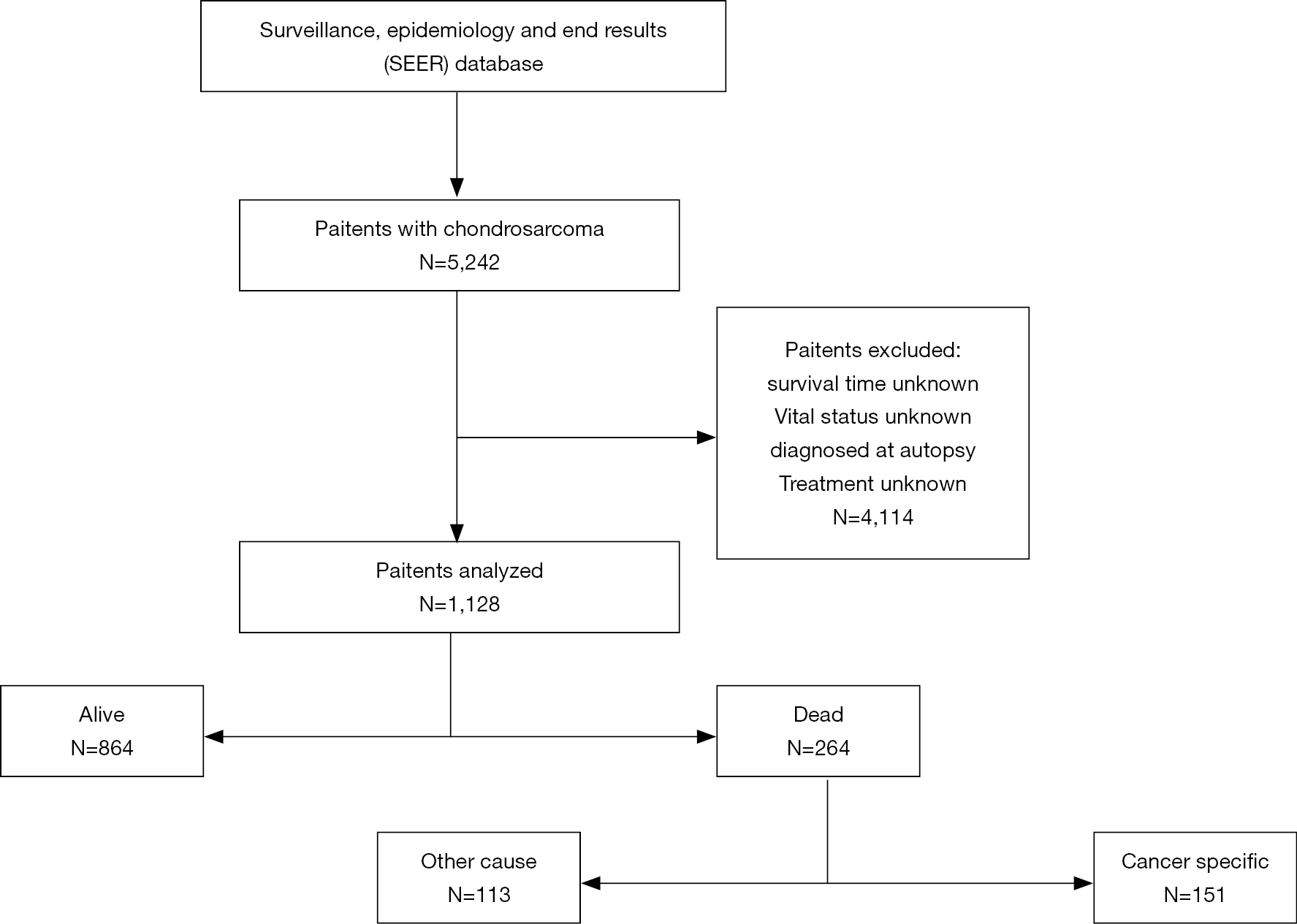 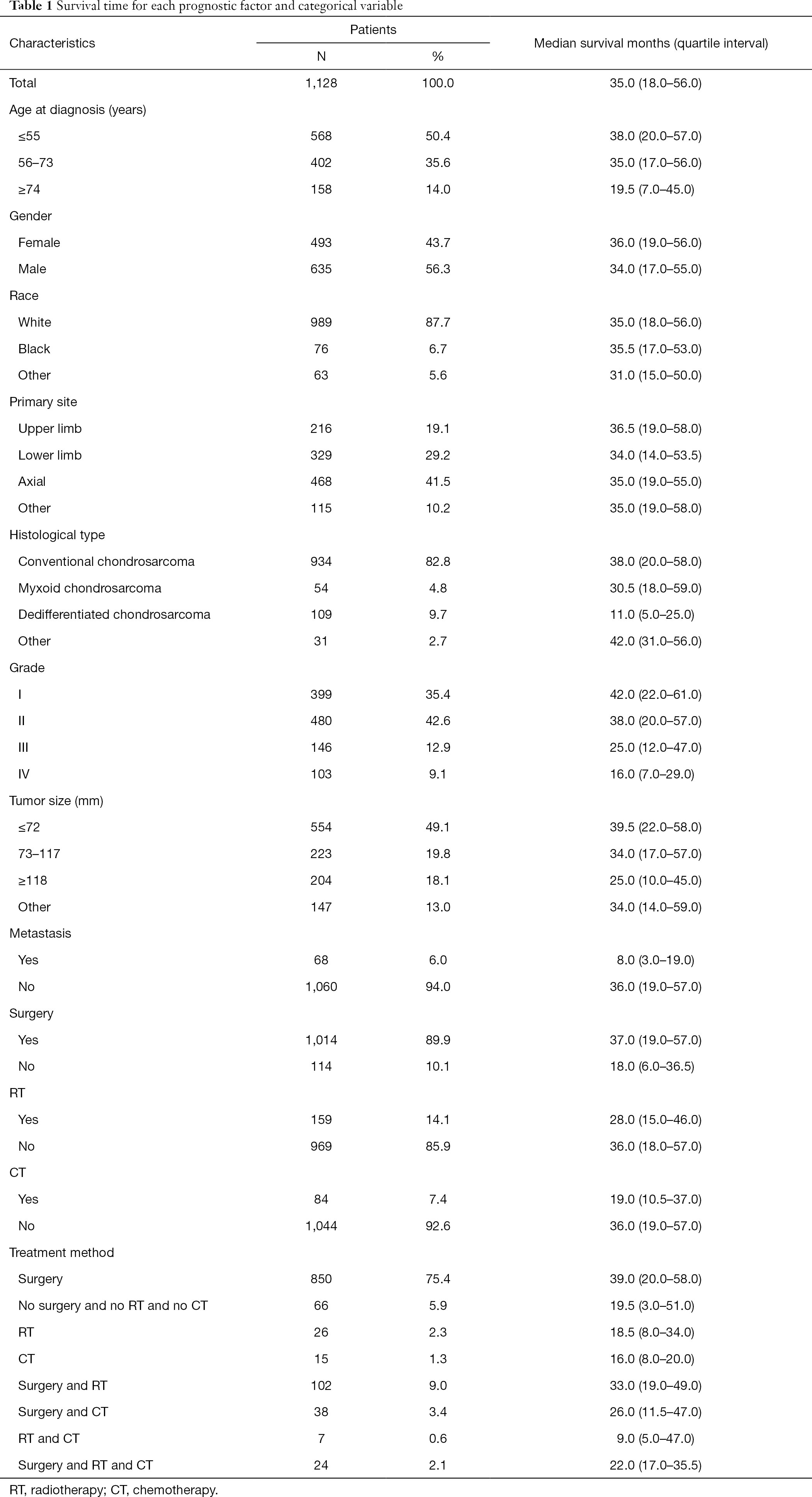 Selection of surgery, RT and CT in patients with chondrosarcoma 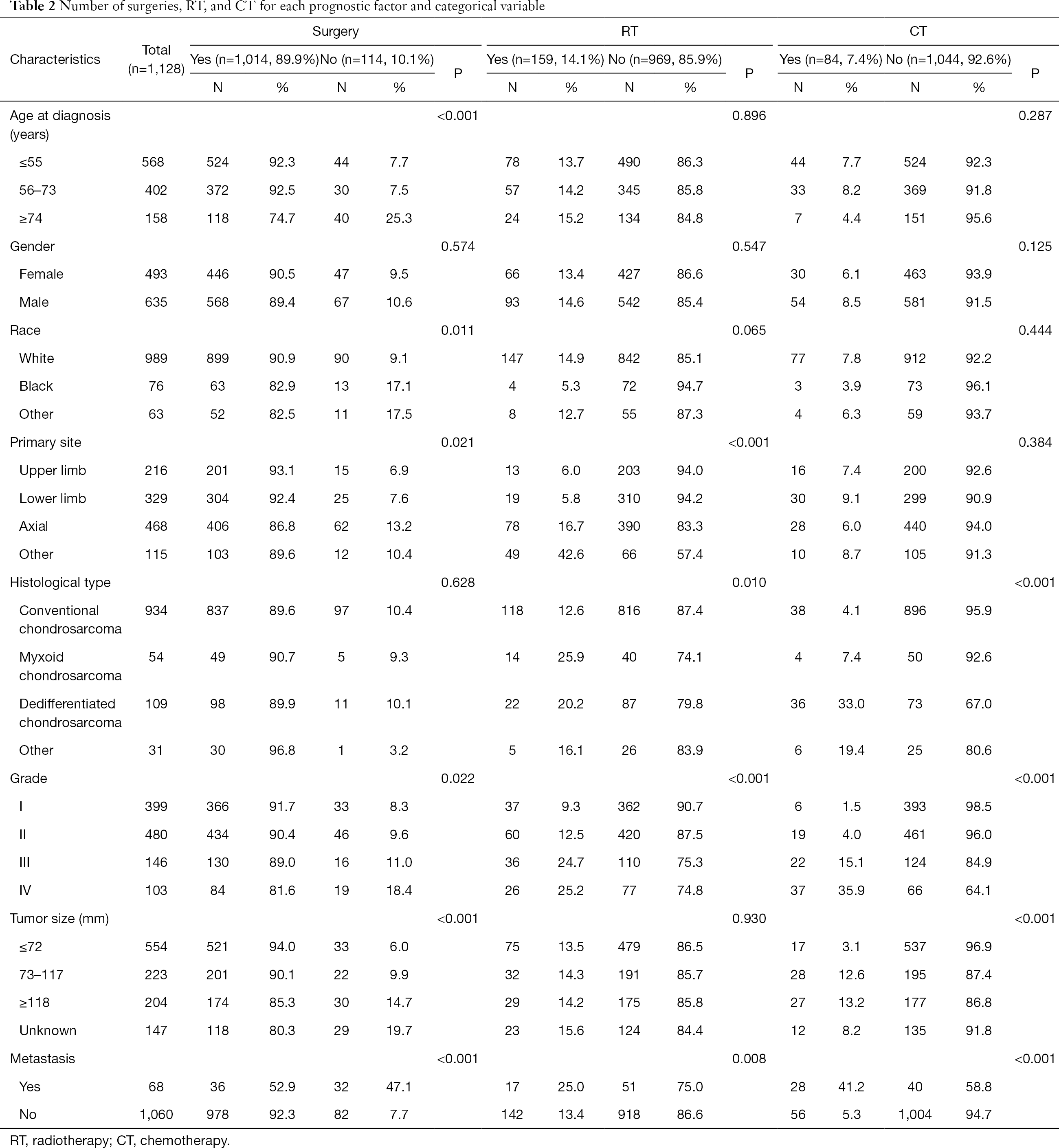 Table 2 Number of surgeries, RT, and CT for each prognostic factor and categorical variable
Full table 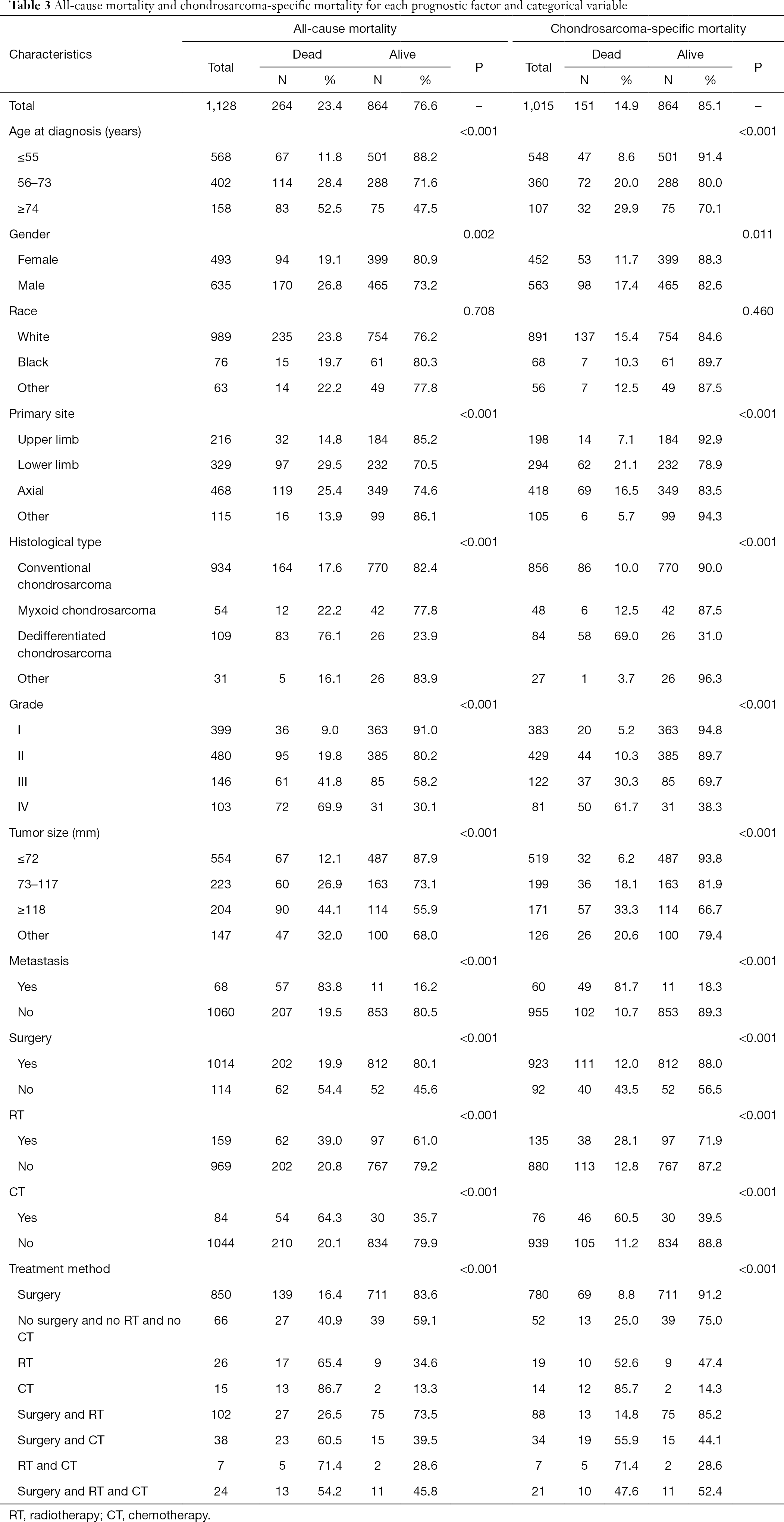 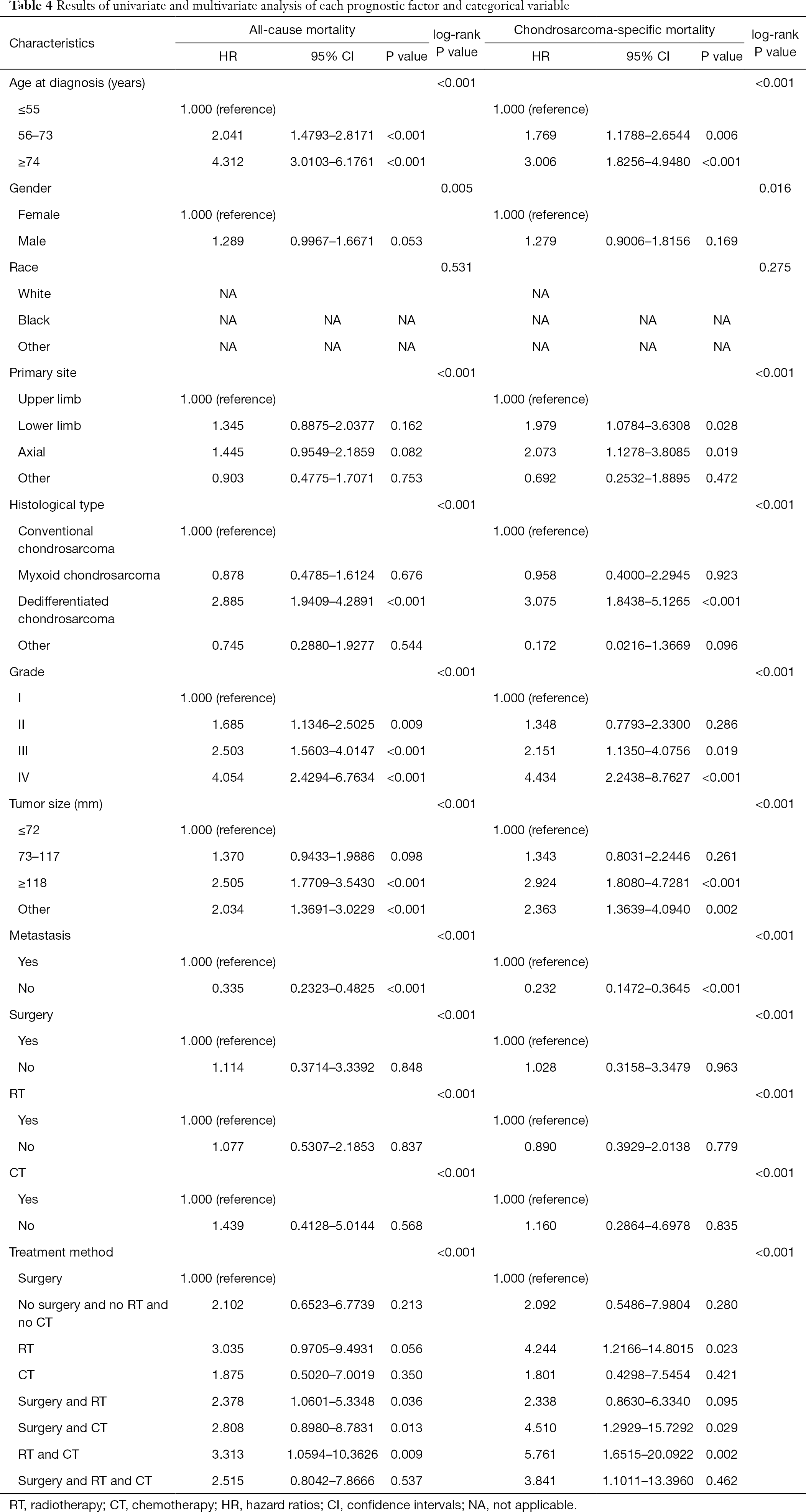 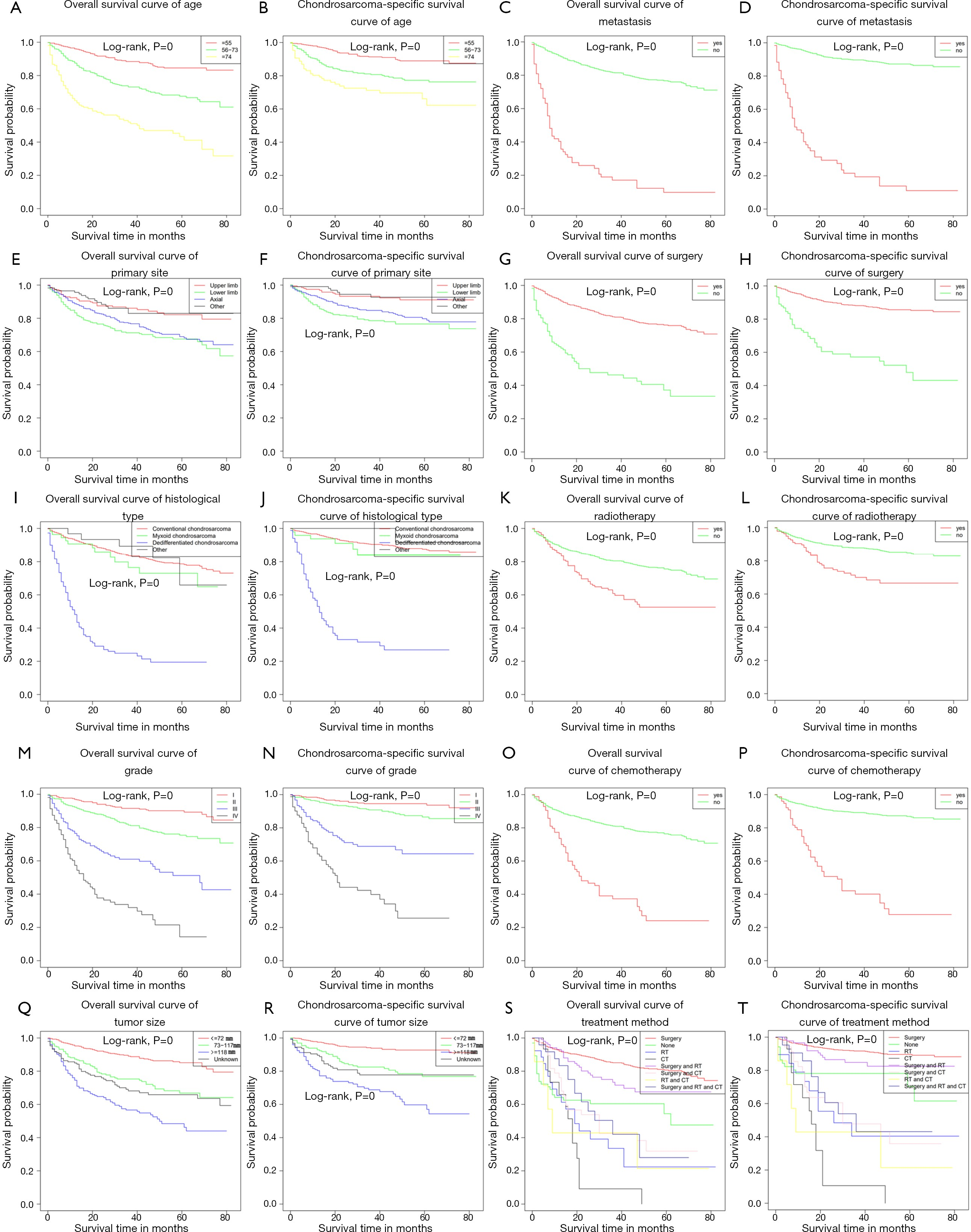 Figure 3 Survival curves in chondrosarcoma patients according to different factors.

Chondrosarcoma is not a common disease, so there is no extensive and in-depth study of its diagnosis and treatment. It has been previously thought that chondrosarcoma is not sensitive to all CT and RT, and patients need to undergo surgical resection of the primary site of extensive lesions. Patients with primary lesion resection have inevitable disability and dysfunction, and surgical resection does not make much sense for tumors that have metastases distantly (24).

At present, in the surgical treatment of chondrosarcoma, limb salvage surgery has become the first choice for orthopedic surgeons, and adjuvant therapy has become an indispensable means of treatment for chondrosarcoma, but no clear conclusions have been drawn on the efficacy of adjuvant therapy. In this study, the longest survival time was still only surgery (39 months). However, surgery with RT (33 months) or surgery with CT (26 months) did not prolong survival time. In addition, both ACM and CSSM, patients with only surgery were the lowest (16.4% and 8.8%, respectively). In the multivariate analysis, surgery and RT or surgery and CT have an increased risk of death compared to only surgery. In addition, in CSSM, the hazard ratios (HR) for surgery and CT reached 4.510, which is almost twice the HR for surgery and RT. There are two reasons for this. On the one hand, patients with high degree of malignancy generally choose the combination of surgery and adjuvant therapy, which is also reflected in our study, from grade I to IV, the proportion of patients receiving RT or CT is gradually increasing, and the risk of death in patients with highly malignant tumors is high. Therefore, the effect of adjuvant therapy cannot be clearly demonstrated. On the other hand, chondrosarcoma is not sensitive to RT and CT and has been supported by many studies. Although studies have been conducted on deeper studies of radiosensitizers or CT regimens for chondrosarcoma, so far, no satisfactory drugs have emerged. Therefore, this study does not support the idea that adjuvant therapy can significantly improve the prognosis of patients with chondrosarcoma.

Grade and tumor size showed significant correlation with prognosis. Patients with poor differentiation or large tumor size have a poor prognosis. The higher the grade, the lower the degree of tumor tissue differentiation, which means that the degree of malignancy of the tumor increases. The expansion of the tumor size means that the tumor tissue is more difficult to remove completely, the possibility of residual and local recurrence increases, and the risk of distant metastasis is greatly improved. This suggests that the surgeon should strictly follow the guiding principle of “complete resection” when faced with poorly differentiated and large chondrosarcoma.

Distant metastasis showed significant correlation with prognosis, and metastasis meant poor prognosis. It is worth noting that chondrosarcoma grows slowly, and its recurrence or metastasis can be 10 years after the first treatment, which means that the follow-up time for patients with chondrosarcoma is longer than that of general tumors, and monitoring the lesion should be more cautious.

This study is based on a retrospective study conducted by the SEER database. Due to the limitations of the data included in the database itself, more detailed patient information is not available. We are unable to obtain a patient’s specific surgical plan, detailed CT drugs, complications and tumor recurrence. In addition, there is no information on targeted therapy in the SEER database, which limits our ability to find more effective adjuvant treatments.

This study found that although non-surgical treatment of chondrosarcoma has made great progress, at present, it is still not considered that non-surgical treatment can significantly improve the prognosis. There are many factors affecting the prognosis of chondrosarcoma, including age, primary site, histological type, grade, tumor size, distant metastasis and treatment method. However, due to the different samples included, the differences in statistical methods, and the development of diagnostic and therapeutic techniques have led to somewhat different from the conclusions of previous studies. In the future, more samples and more detailed data will be needed to study the treatment of chondrosarcoma and to analyze the important factors affecting prognosis through big data analysis.

KC Hua: I would like to express my special thanks to my partners for the encouragement and support they gave me during my study. Thanks to my wife, Mrs. Sun, for her support for my life and research.

Reporting Checklist: The authors have completed the STROBE reporting checklist. Available at http://dx.doi.org/10.21037/tcr-20-357

Conflicts of Interest: Both authors have completed the ICMJE uniform disclosure form (available at http://dx.doi.org/10.21037/tcr-20-357). The authors have no conflicts of interest to declare.