Compared with other commonly seen esophageal cancers like esophageal adenocarcinoma (EACA) and esophageal squamous cell carcinoma (ESqCC), ENEC has more aggressive biological behavior (7,8). The lesions of ENEC are mainly found in the middle and lower parts of the esophagus, probably because of the unequal distribution of endocrine cells in the esophagus (9). Principal symptoms of ENEC include dysphagia, gastroesophageal reflux, chest pain, and weight loss, which can also appear in other esophageal cancers (10,11). However, because of ENEC’s endocrinal property, patients may also manifest different hormone-related syndromes (8,12).

Treatments of ENEC have not been well studied. Besides, there is a lack of population-based analysis on ENEC due to its rarity. In this study, we examined the Surveillance, Epidemiology, and End Results (SEER) registry to evaluate the incidence, treatment, and prognosis of ENEC.SEER database is a powerful tool to get information about rare cancers. We analyzed the clinicopathological characteristics of the ENEC population. We also compared the different prognosis of treatments, including surgery, chemotherapy, and radiotherapy. As such, this study can help improve the understanding of ENEC.

We present the following article in accordance with the STROBE reporting checklist (available at http://dx.doi.org/10.21037/tcr-19-2650).

We extracted information about ENEC, ESqCC, and EACA from 1975 to 2016 from the SEER 18 database. Subsequently, we analyzed the incidence, frequency, and survival data. Due to omitted patient identifiers, this study did not have to get the approval of Institutional Review Board.

We used behavior code 3 to identify malignant tumors. After the filtration, only cases identified by site-specific codes of the esophagus (C15.0 - C15.5, C15.8 and C15.9) were included, based on the International Classification of Disease for Oncology, 3rd Edition (ICD-O-3). Histology/behavior code representing different subtypes of NEC included typical carcinoid (8240/3), atypical carcinoid (8249/3), large cell NEC (8013/3), small cell NEC (8041/3), and NEC NOS (8246/3). Histology/behavior code of ESqCC and EACA was 8140/3 and 8070/3, respectively. Tumors with diagnostic confirmation (microscopically/not microscopically confirmed) were included for further analysis. Tumors that are not malignant, not first occurring, and without histology/exfoliative cytology/microscopic/laboratory test or marker confirmed were excluded from the initial cohort.

All rates were reported per 100,000 persons. The age of the patients was adjusted to the 2000 US Standard Population (19 age groups, census P25 - 1130) standard. The annual percent change was demonstrated in incidence using 1-year endpoints to analyze the survival rate. OS and CSS were used to reflect survival trends and build the Kaplan-Meier model.

After the extraction of frequency, incidence, and survival data in all cases from the SEER 18 database, statistical analysis was executed in SPSS software (version 24.0, SPSS Inc., Chicago, IL, USA) and SEER*Stat 8.3.6 software (National Cancer Institute, Bethesda, Maryland, USA). Data of incidence were analyzed by weighted least squares to generate annual percentage change based on 1-year endpoints in SEER*Stat 8.3.6 software. The student’s t-test and Chi-square test were respectively used to deal with continuous and categorical variables. P values were two-tailed, and those less than 0.05 was considered as significant. 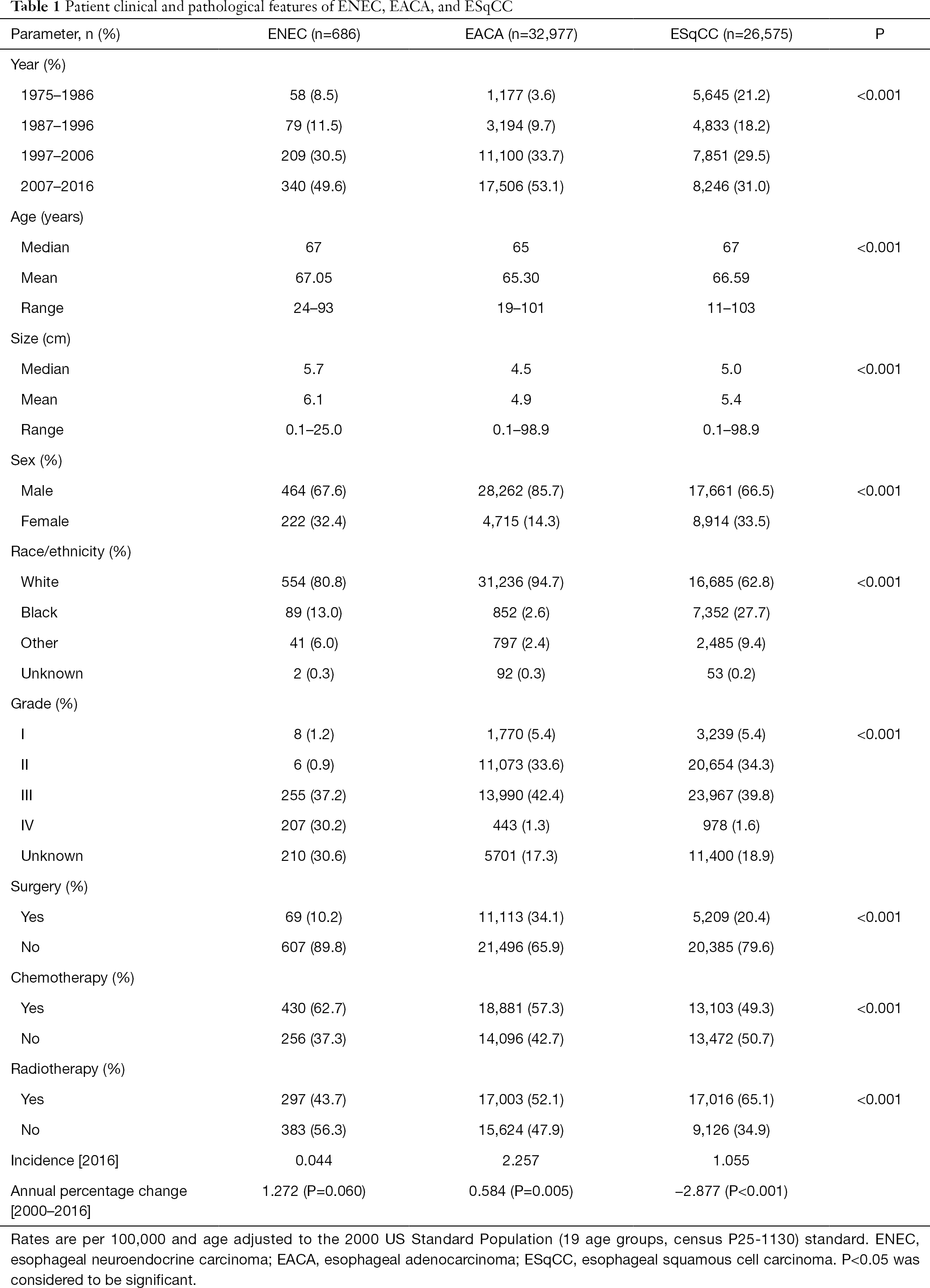 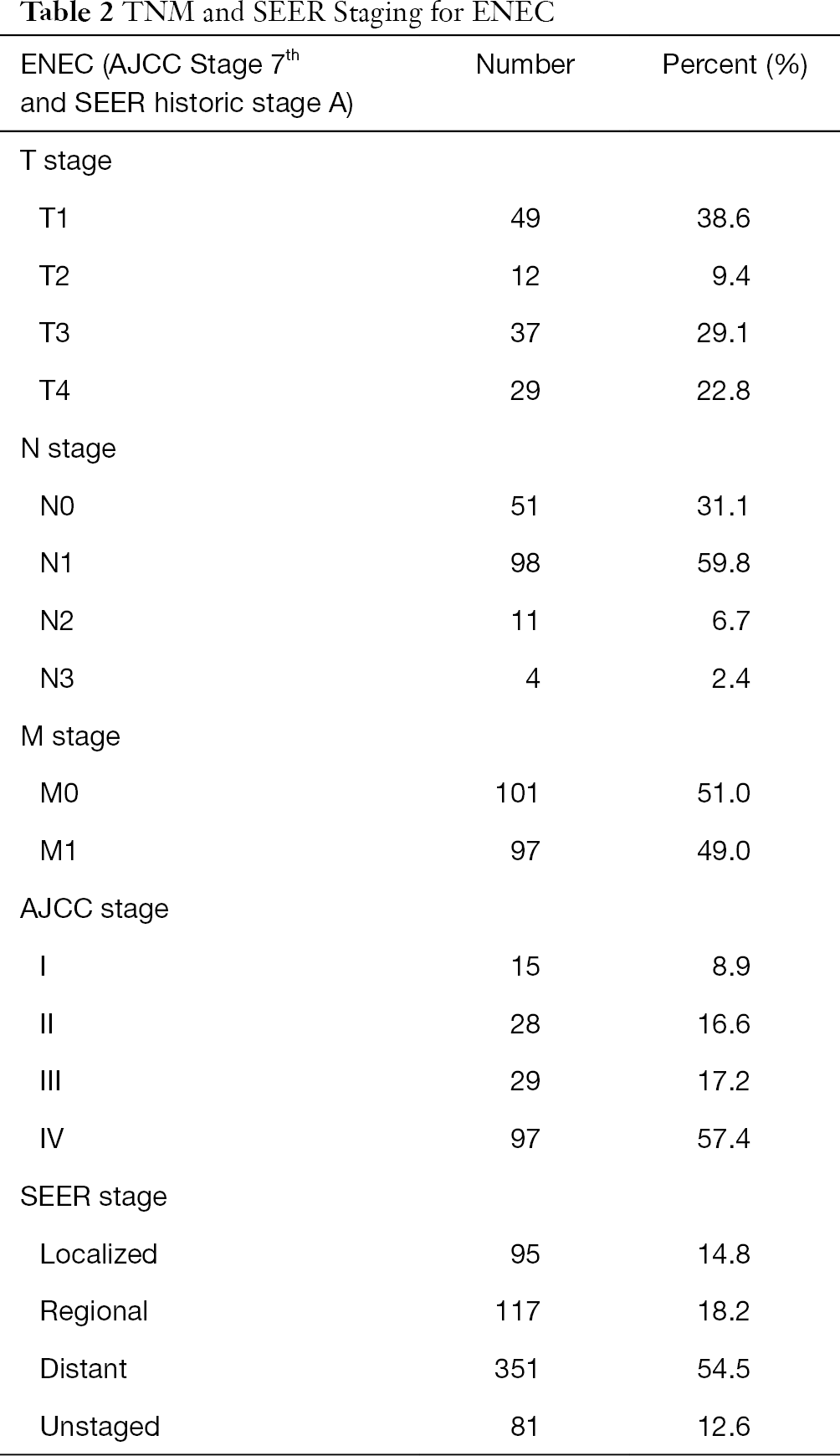 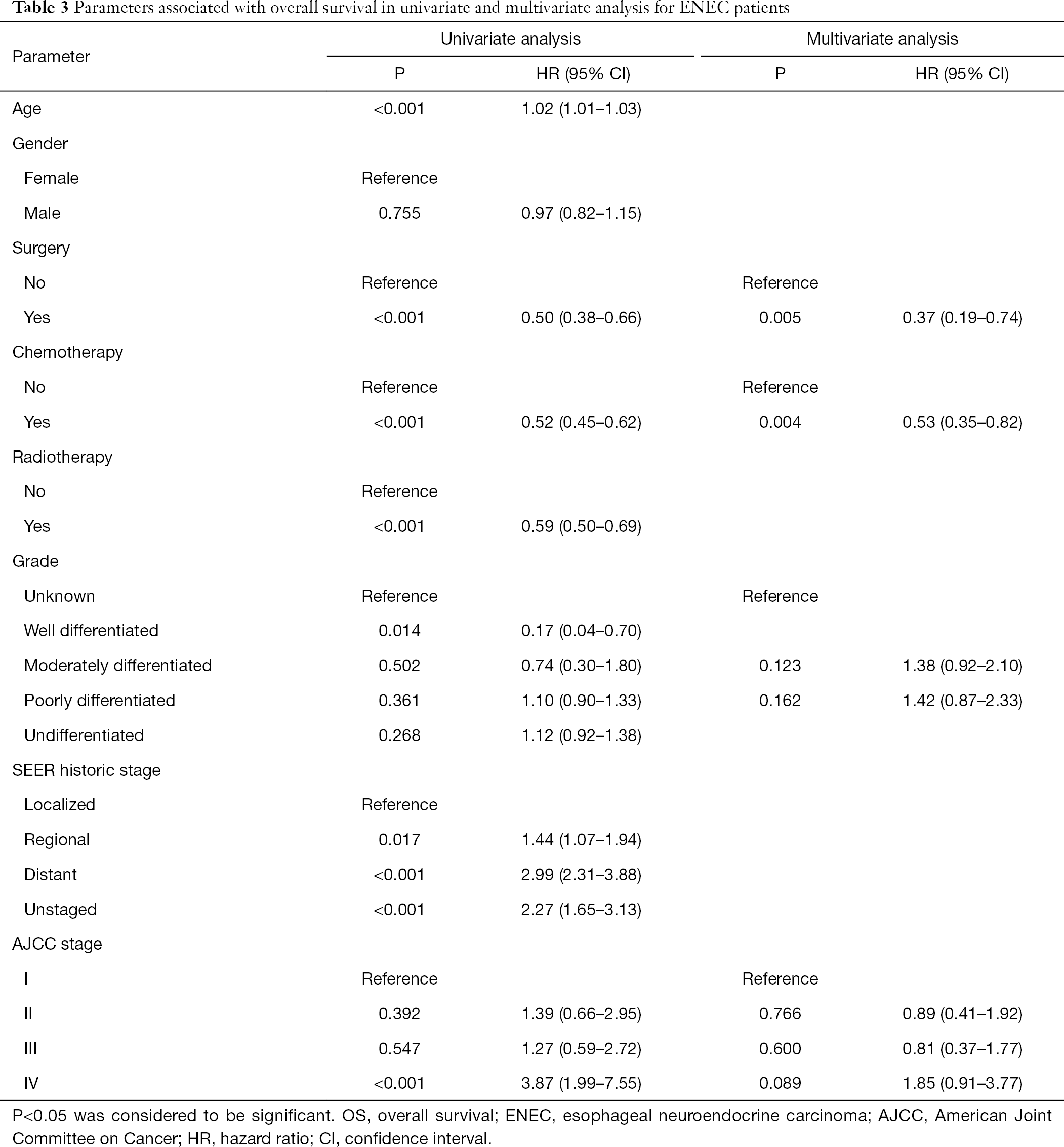 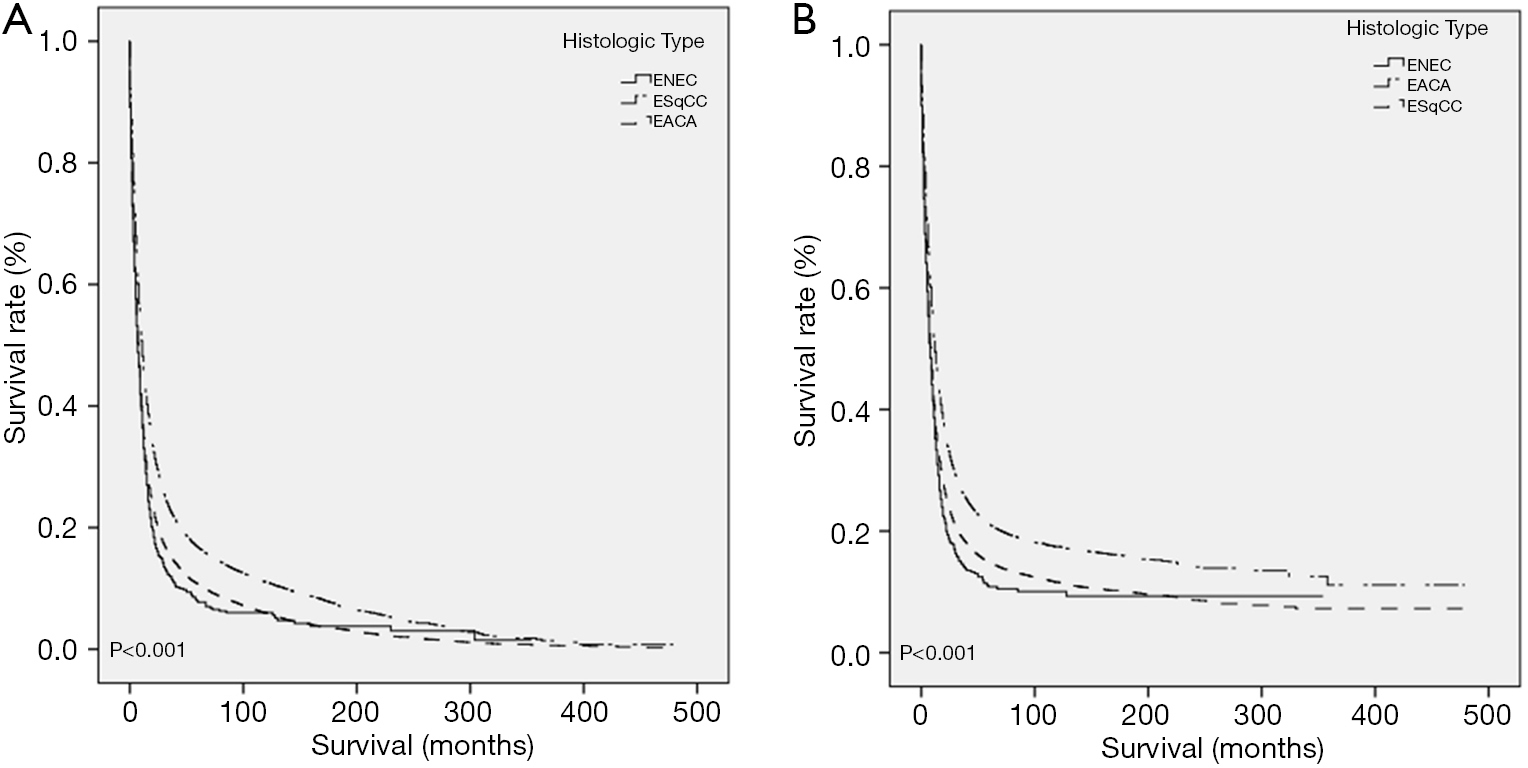 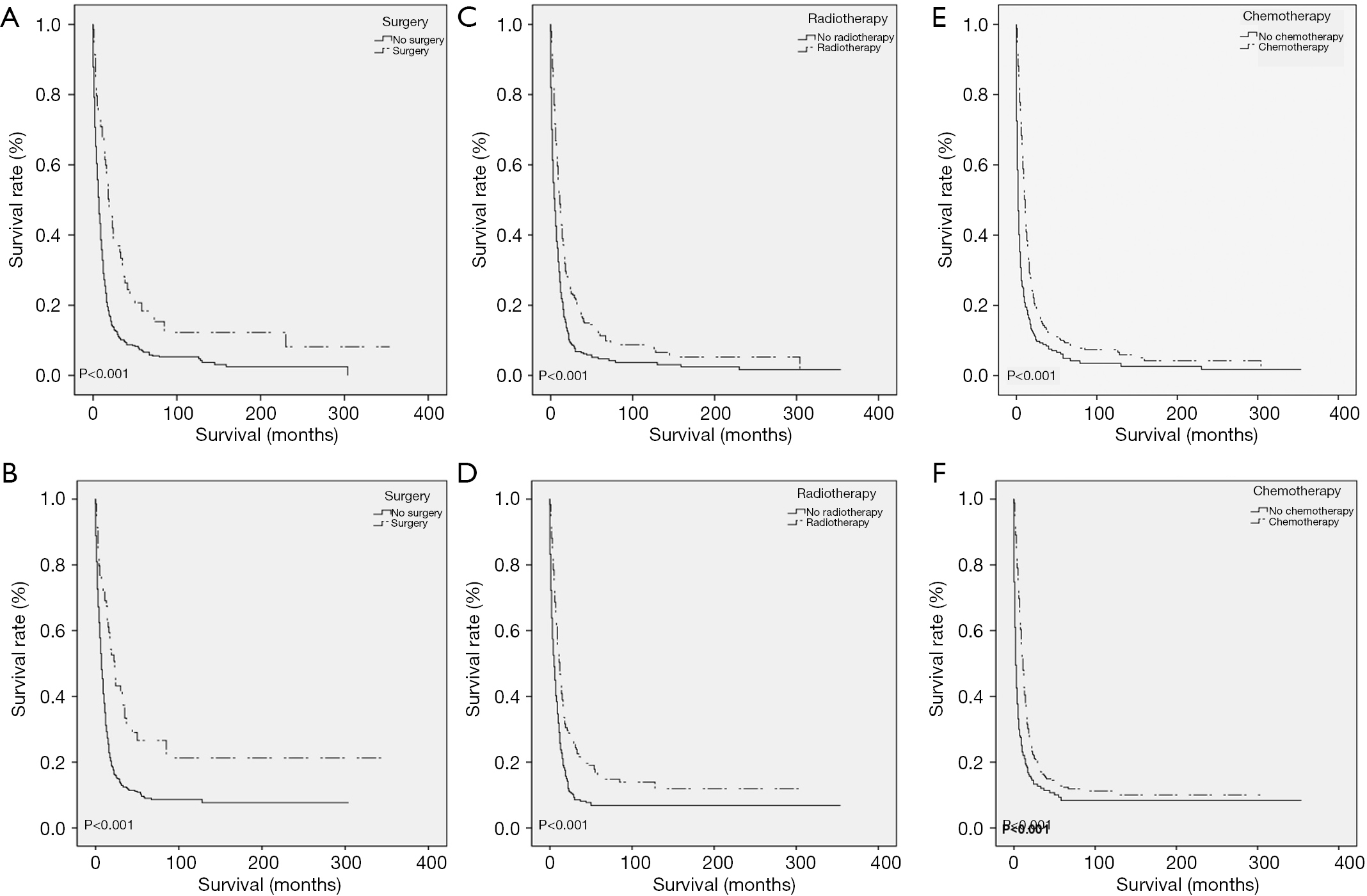 Figure 4 Effect of different treatments on the prognosis of patients with ENEC. CSS and OS of (A,B) surgery vs. no surgery, (C,D) radiotherapy vs. no radiotherapy, and (E,F) chemotherapy vs. no chemotherapy. ENEC, esophageal neuroendocrine carcinoma; CSS, cancer-specific survival; OS, overall survival. P<0.05 was considered to be significant. 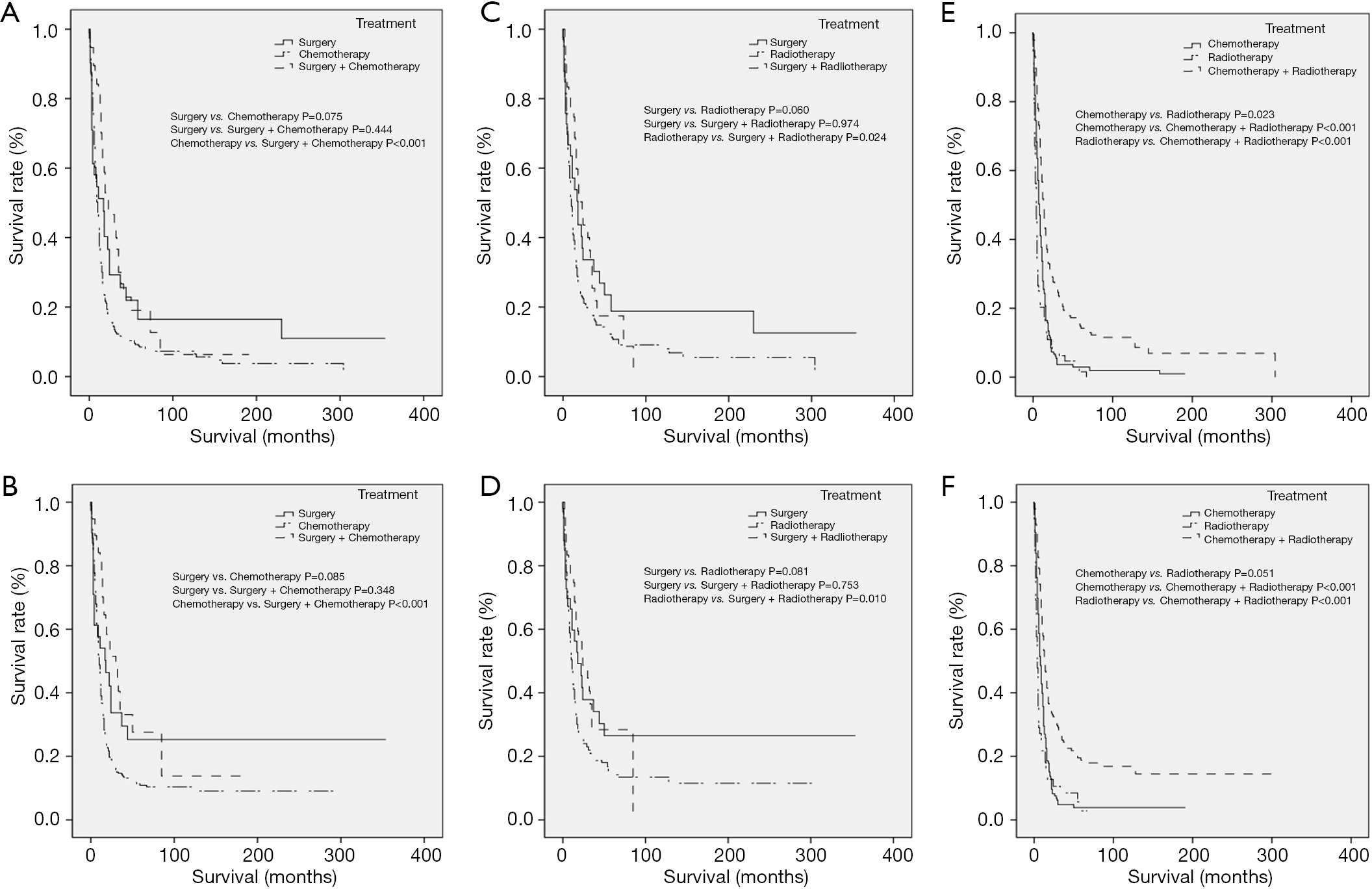 As a subtype of ENENs, ENEC is extremely rare (1). Unlike well/intermediate-differentiated ENENs once referred to as carcinoid tumors, ENEC is poorly differentiated (12). The exact cause of ENEC stays unclear. Smoking and alcohol consumption are high-risk factors of ENEC (13). Cellular components in the gastrointestinal tract, like Merkel cells and Cajal cells, may be involved in the development of ENEC due to its observed association with other types of tumors in the digestive system. At the molecular level, positive stained indicators like p53, c-kit, and CK20 could participate in the initiation and progression of ENEC (14). There is a lack of population-based studies on ENEC. This study aimed to improve the understanding of ENEC in population regarding its incidence, treatment, and prognosis.

The term “neuroendocrine” refers to tumor cells with both “neuro” and “endocrine” properties. On the one hand, the “neuro” property is based on the finding of dense-core granules. Such granules also appear in serotonergic neurons containing monoamines. On the other hand, the “endocrine” property suggests the synthesis and secretion of these monoamines. The neuroendocrine system ranges from endocrine glands (like pituitary and parathyroid), endocrine islet tissue (like pancreatic islets and thyroid) to scatter cells (like endocrine cells of digestive and respiratory tracts) in exocrine parenchyma. In most cases, primary tumors of NENs appear in the gastrointestinal tract (62–67%) and lungs (22–27%) (15-17). On the contrary, NENs seldom appear in the esophagus (1,18). Therefore, ENEC is also rare, and in our study, the incidence of ENEC was 0.044 per 100,000 persons, much lower than those in EACA and ESqCC (Table 1 and Figure 2). Such phenomenon may be attributed to the underdevelopment of the neuroendocrine system in the esophagus.

In this study, despite the annual percentage change of ENEC was steady, we still observed the gradually increased number of patients with ENEC, which could be attributed to the improvement in its diagnosis. Clinical diagnosis of ENEC relies on examining pathological slices as well as specific immunohistochemistry. Traditionally, ENEC is graded as G3 with a mitotic count of more than 20 per high power fields or a Ki-67 index of more than 20% (6). For ENEC, commonly used tumor markers also include CgA and 5-HIAA. Plasma CgA is correlated with tumor bulk, differentiation, and secretory activity, which, in turn, can predict treatment response and survival (19,20). Besides, due to the “endocrine” property, tumor cells can also produce various bioactive amines and peptides, like serotonin, insulin, and somatostatin, leading to uncommon but unique clinical syndromes. Additionally, ENEC may be related to genetic mutations, such as mutations of multiple endocrine neoplasia type 1 and 2 (MEN-1 and MEN-2) (21-23). By analyzing the demographic features of our study cohort, we found that ENEC preferred old (mean: 67.5) and male (male vs. female: 67.6% vs. 32.4%) patients. Besides, ENEC had a more significant proportion of high grades (I: 1.2%; II: 0.9%; III: 37.2%; IV: 30.2%) compared with EACA and ESqCC (Table 1). Therefore, as we expected, the prognosis of ENEC was worse than that of EACA and ESqCC (Figure 2), which also agreed with previous studies. As shown in Table 1, the proportion of patients who underwent surgery was considerably lower (surgery vs. no surgery: 10.2% vs. 89.8%), compared with the proportion of patients adopting chemotherapy or radiotherapy. Such difference could be attributed to the aggressiveness of ENEC, which may cause metastasis at an early stage (9). Further analysis confirmed such speculation. Near half of the patients with ENEC were in the M1 stage, and more than half of patients with ENEC were at the AJCC IV stage, suggesting the loss of opportunities for surgical intervention. Besides, according to SEER staging analysis, only a small portion of patients with ENEC (14.8%) was at a localized stage. All these results suggest that ENEC could be highly aggressive, and it is essential to deliver in-time treatments at an early stage.

Treatment strategies of ENEC have not been established due to its rarity. Current treatment regimens are generally based on the protocols of treating NECs on other sites like lungs (24). Surgery would be an ideal option when no metastasis occurs, while high rates of recurrence may raise a significant challenge to its efficacy (25). Whereas, a recent study still indicated that aggressive surgery could yield benefits for patient survival (26,27). Chemotherapy, such as irinotecan and platinum, is also among the first-line use. By now, multidisciplinary treatment, including adjuvant chemoradiotherapy, serves as an appropriate option, although ineffectiveness has been reported in large-cell ENEC concerning clinical outcomes (28,29). Besides, specific inhibition of molecules like CDK4/6 by using monoclonal antibody seems to be a promising strategy indicated by some cases (30).

Through univariate analysis, we found that surgery, chemotherapy, and radiotherapy can all benefit ENEC patient survival (Table 3). Multivariate analysis suggested surgery and chemotherapy could serve as independent protective prognostic factors for patients with ENEC. To date, the clinical rule of thumb is still to make surgical resection when possible. However, the role of surgery in ENEC remains controversial, despite our research and previous studies have demonstrated the survival benefit of surgical resection of ENEC (31,32). Meanwhile, different responses to surgery exist in patients with ENEC, indicating the need for further subgrouping patients with ENEC. Furthermore, compared with conventional esophagectomy, endoscopic submucosal dissection is less invasive. It can also achieve excellent results with early-stage tumors with a small diameter and a shallow depth (33).

Apart from surgery, chemotherapy and radiotherapy could play essential roles in ENEC treatments (9,34-37). In our finding, we also found chemotherapy was an independent prognostic factor for patients with ENEC (37). Moreover, previous studies showed that surgery combined with adjuvant therapy might be a good option for treating ENEC (9,38-41). Our findings also suggested more advantages of combinational therapy than monotherapy (Figure 5). Previously reported cases indicated that neoadjuvant chemotherapy might benefit patients with ENEC (38-41). However, the therapeutic effects of chemotherapy can be unsatisfactory due to low mitotic rate, high expression of the antiapoptotic protein Bcl-2, and drug-resistant genes in poorly differentiated tumors (42). As for radiotherapy, somatostatin analogs like 117Lu-octreotide could be used to increase survival rate, because of the high expression level of somatostatin receptor in tumor cells of ENEC. Somatostatin analogs can be biological therapeutics as well. By binding to their receptors, somatostatin analogs could inhibit the activity of adenylate cyclase and reduce calcium channel opening to block hormone synthesis and secretion (43,44).

Admittedly, our research still has limitations, although we used population-based data. First, there was a lack of pathological slices and immunohistochemistry results, which we can directly observe in the SEER database. Second, there were insufficient details regarding surgery types, drug use, radiotherapy protocols, and comorbidities to support further analysis. Third, data input in different times and locations, or by different recorders, may introduce biases to some extent. Whereas, using the SEER database can yield significant benefits. The standardized database can also eliminate biases caused by geographical and institutional heterogeneity during analysis. Moreover, a considerable number of patients can help researchers to draw persuasive conclusions in analyzing rare malignancies like ENEC.

In summary, the incidence of ENEC is extremely low. Compared with EACA and ESqCC, ENEC had more aggressiveness and worse prognosis. While some clinical symptoms are similar to other esophageal cancers, it can have uncommon and unique manifestations due to its neuroendocrine properties. Pathological examinations are essential for diagnosis, while specific immunohistochemistry like Ki-67 is an important complement to pathological diagnosis. Surgery is still the mainstay in the treatment of ENEC, and adjuvant treatments, including chemotherapy and radiotherapy, can significantly improve patient prognosis.

Our population-based evidence showed that ENEC, as a rare cancer, had a worse prognosis compared with EACA and ESqCC. Surgery, chemotherapy, and radiotherapy can all improve ENEC patient prognosis. Combinational therapy can yield a better prognosis than monotherapy.

We would like to extend our appreciation to the SEER database.

Reporting Checklist: The authors have completed the STROBE reporting checklist. Available at http://dx.doi.org/10.21037/tcr-19-2650

Conflicts of Interest: All authors have completed the ICMJE uniform disclosure form (available at http://dx.doi.org/10.21037/tcr-19-2650). The authors have no conflicts of interest to declare.

Ethical Statement: The authors are accountable for all aspects of the work in ensuring that questions related to the accuracy or integrity of any part of the work are appropriately investigated and resolved. Due to omitted patient identifiers, this study did not have to get the approval of Institutional Review Board.