Hepatocellular carcinoma (HCC) is a usual malignant tumor with an increasing incidence and one of the leading causes of cancer-associated deaths globally (1,2). Viral infections are often associated with liver cirrhosis and HCC (3). The therapeutic strategies of HCC depend on disease stage, operative tolerance, and possibility of liver transplant (4). HCC remains a challenging clinical problem with high incidence, limited therapeutic strategies, and poor prognosis. Therefore, it is a pressing task to screen potential biomarkers and uncover the detailed molecular mechanisms underlying of HCC.

With the advent of transcriptome analysis, bioinformatics have become most common ways to identify potential biomarkers of various diseases (5,6). Increasing evidences have indicated that lncRNAs plays a key roles in tumor-related biological processes, such as proliferation, invasion and metastasis (7,8). Recently, many lncRNAs are considered to be novel potential biomarkers and therapeutic targets for various cancers (9,10). The emerging roles of lncRNAs in HCC have also been explored in previous studies (11-13). However, there are few studies on biomarkers of lncRNA in early and late HCC.

In the current study, we identify shared differentially expressed lncRNAs (DElncRNAs) and mRNAs (DEmRNAs) between early and late HCC and normal tissue base on the Cancer Genome Atlas (TCGA) data. For the shared DEmRNAs, functional annotation and protein-protein interaction network construction were performed. Furthermore, DElncRNAs-DEmRNAs co-expression network of early and late HCC were performed. The expression levels of candidate genes were verified using quantitative real time polymerase chain reaction (qRT-PCR). Our study identified potential key DEmRNAs and DElncRNAs in early and late HCC, and provided novel insights into the mechanisms of lncRNAs in HCC.

The undetectable lncRNAs and mRNAs (with read count value =0 in more than 20% HCC case) were filtered and deleted. The DElncRNAs and DEmRNAs in HCC compared to adjacent normal tissues were identified using the R package DESeq2. The thresholds for differential expression analysis were defined as P value <0.01 and |Log2fold change|>1.5. We used the R package v3.3.3 (https://www.r-project.org/) to perform hierarchical clustering analysis of DElncRNAs and DEmRNAs.

To discover the biological functions and the potential pathways of DEmRNAs in HCC, Gene Ontology (GO) classification and Kyoto Encyclopedia of Genes and Genomes (KEGG) pathway enrichment analysis were retrieved using DAVID 6.8 (https://david.ncifcrf.gov/). The terms with P value < 0.05 were significant results.

Three gene (CENPF, KIFC1 and ECM1) and three lncRNAs (CTD-2510F5.4, AC092171.4 and HAND2-AS1) were selected as candidate genes for qRT-PCR verification. Here, 6 HCC patients were included in our study from the Department of Hepatobiliary Surgery, The Third Hospital of Hebei Medical University. Twelve tissue samples including 6 HCC tumor samples and 6 cancer adjacent samples were obtained. This study was approved by the institutional ethics committee of The Third Hospital of Hebei Medical University (No. 2018-025-1) and conducted in accordance with the Declaration of Helsinki. The signed informed consents of all the participants were obtained.

Identification of DEmRNAs and DElncRNAs 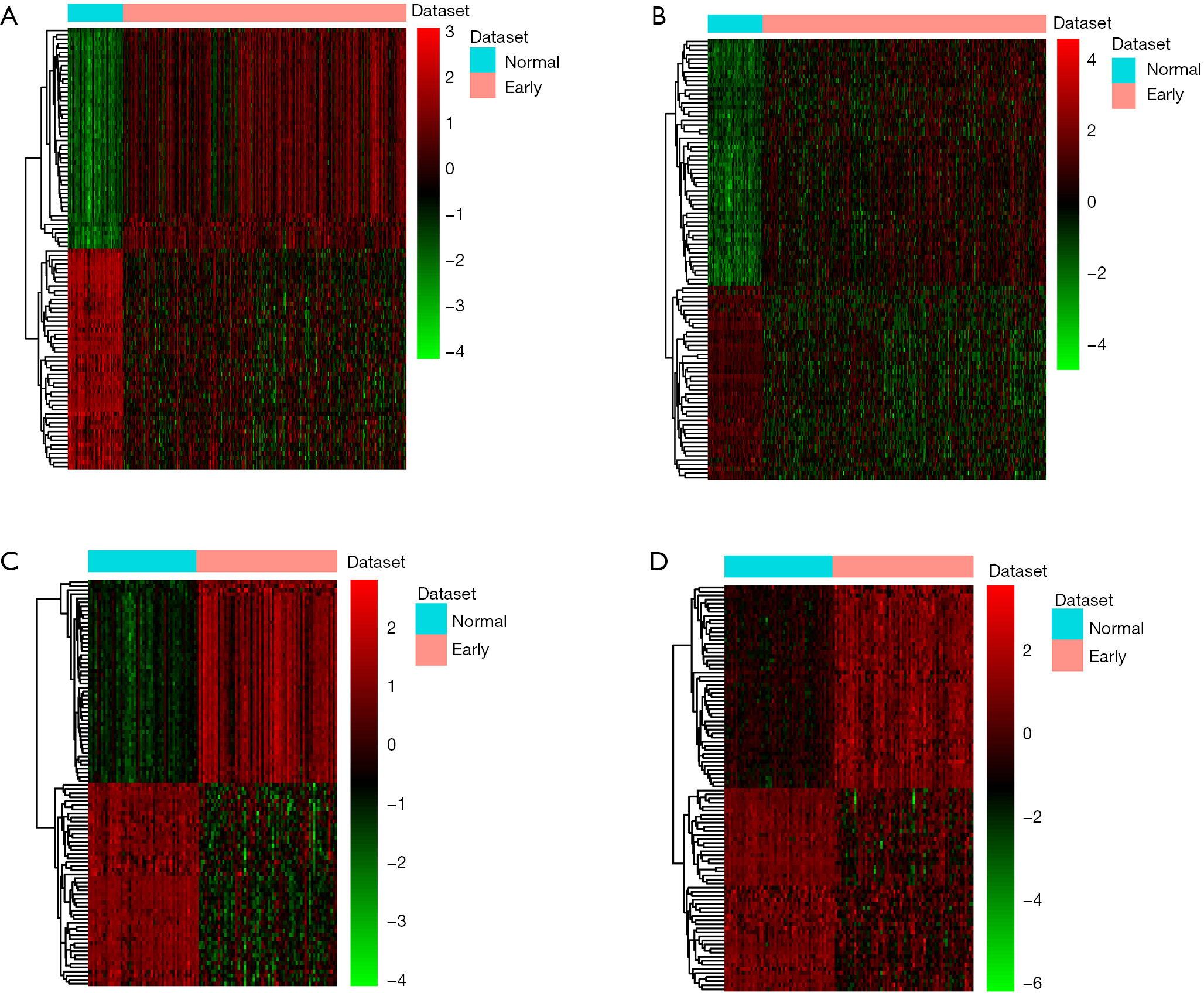 Functional annotation of shared DEmRNAs in early and late HCC 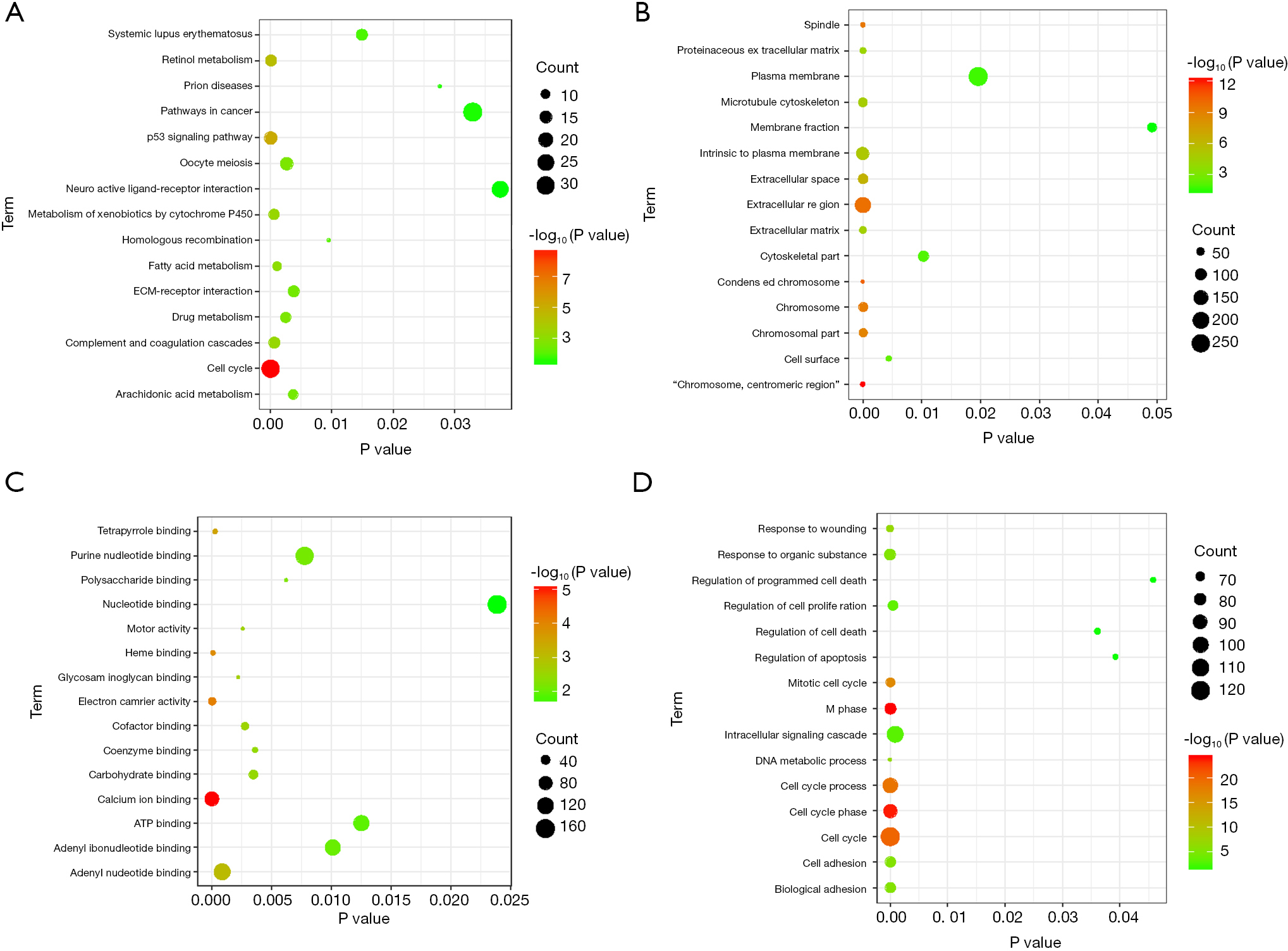 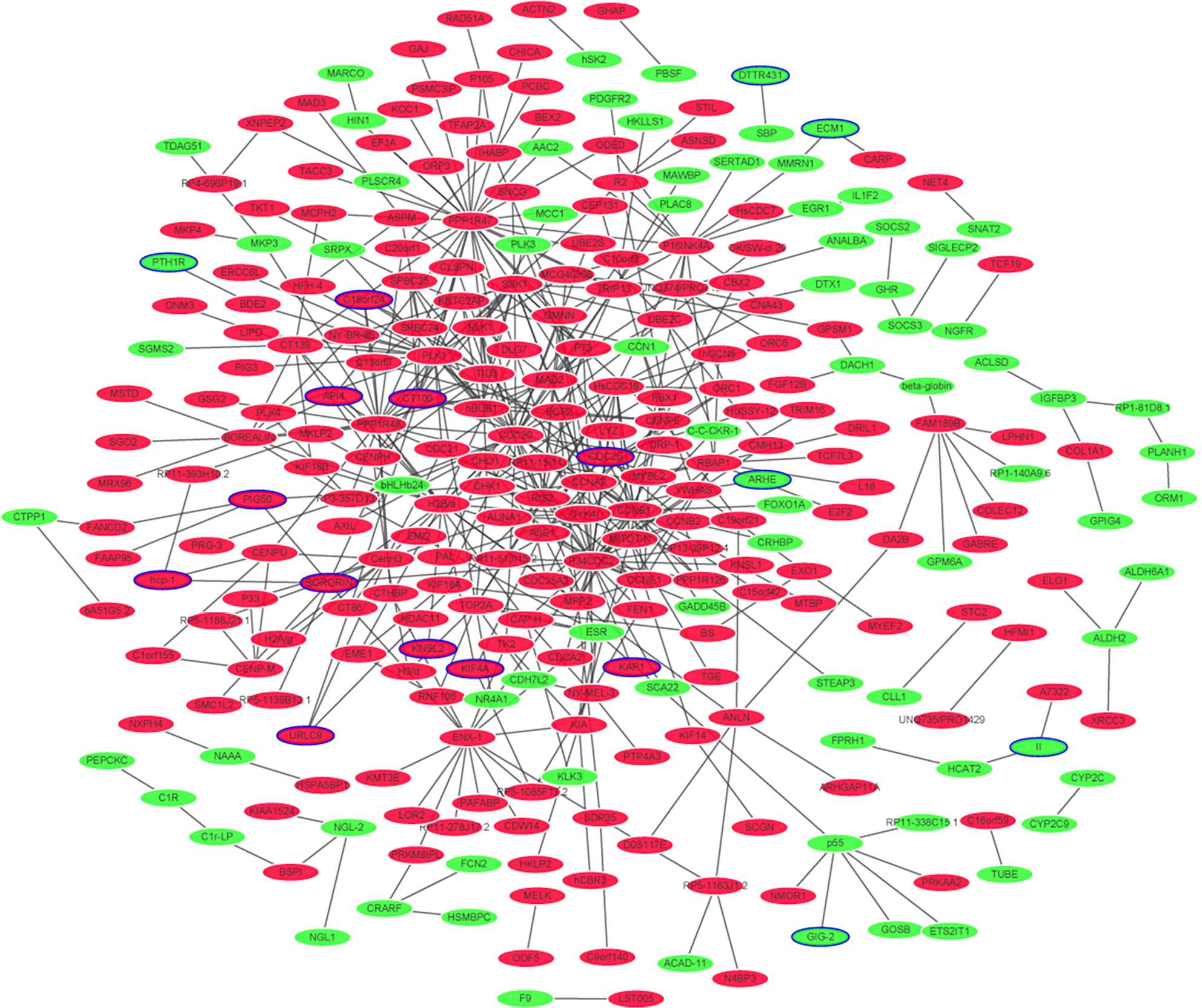 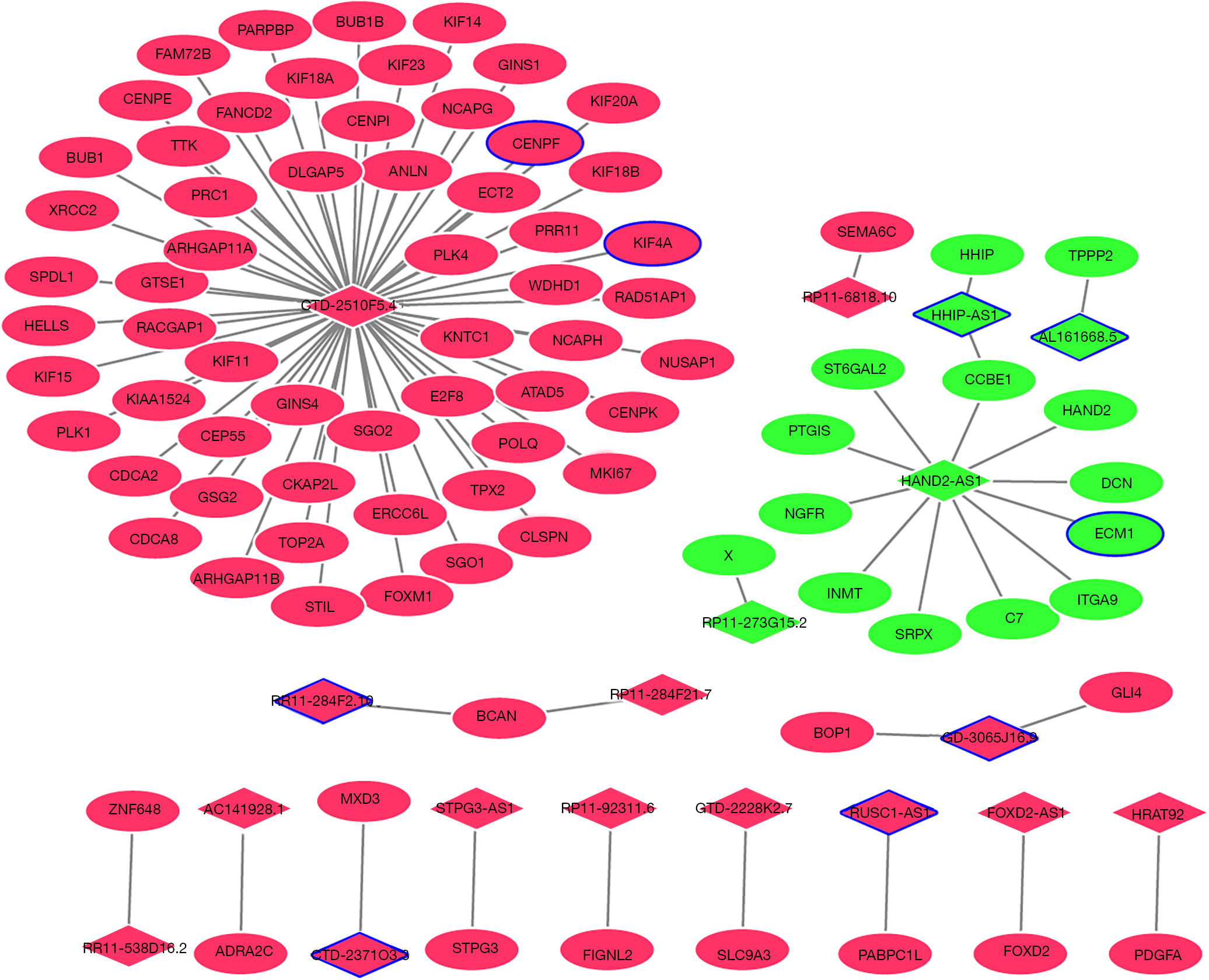 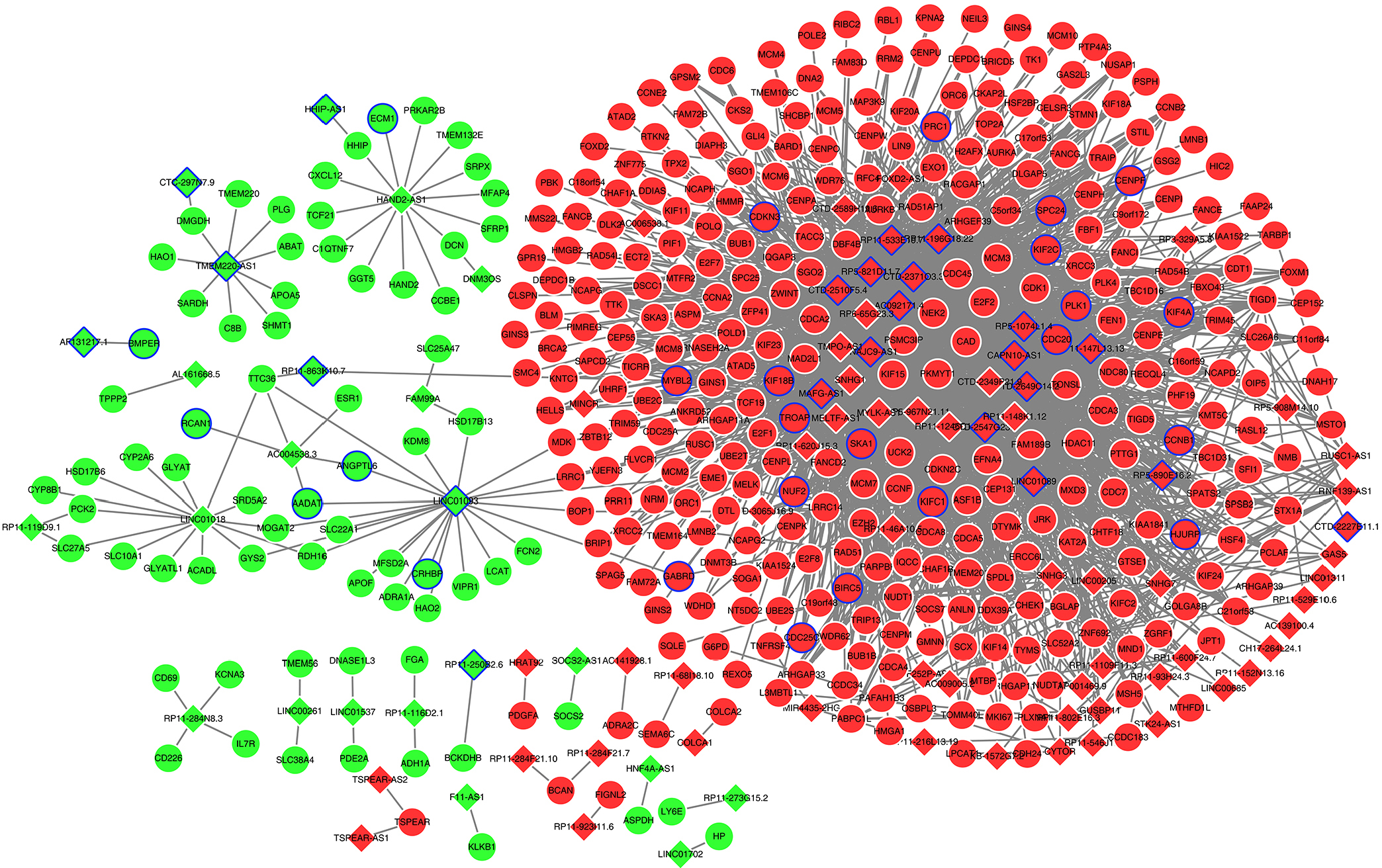 HCC is a prevalent malignancy that is considered the leading cause of cancer-related deaths worldwide due to the lack of effective treatment (3). Thence, it is urgent to discover potential biomarkers and therapeutic targets for HCC. In this study, a total of 1201 shared DEmRNAs and 162 shared DElncRNAs were identified in both early and late HCC compared with normal controls. For the shared DEmRNAs, functional annotation and protein-protein interaction network construction were performed. Among which, CDK1 (degree=35) was key nodes. In addition, the expressions of 6 candidate genes were verified by the qRT-PCR experiments.

Cyclin dependent kinase 1 (CDK1), belongs to the Ser/Thr protein kinase family, is associated with cell cycle. A recent study has been reported that metformin inhibits the proliferation of HCC cells through inducing G2/M arrest and reduces the expression of CDK1 (14). Wu et al. found that high expression levels of CDK1 in HCC were associated with poor overall survival (15). CDK1 might be involved in progression of HCC via interaction with PLK1 and FOS (16). In this study, CDK1 was also up-regulated in HCC and significantly enriched in pathways of p53 signaling pathway. Paired-related homeobox 1 involves in metastasis and apoptosis of HCC cells by regulating p53-dependent signaling pathway (17). Therefore, we speculated that CDK1 might play a role in pathogenesis of HCC by regulating p53-dependent signaling pathway.

Kinesin family member C1 (KIFC1), a member of the kinesin superfamily, is to act as a motor protein and move towards the minus-end of the microtubule to further affect its dynamics and functions (18). KIFC1 regulates the formation of centrosomes, and it has been found that upregulation of KIFC1 results in the formation of unipolar spindles in cancer cells (19). It has been reported that KIFC1 is a potential marker that predicts an aggressive disease course in ovarian cancer (19). KIFC1 is overexpressed in HCC and that its expression is closely related to the progression and metastasis of HCC (20). High expression of KIFC1 is associated with the progression of HCC, indicating that KIFC1 is a putative marker for prognostic and therapeutic in HCC (21). In this study, we found that KIFC1 was up-regulated in both TCGA integration analysis and qRT-PCR validation, indicating that it might be a potential therapeutic target for HCC.

Centromere protein F (CENPF) is a cell cycle-associated nuclear antigen associated with the centromere-kinetochore complex whose expression and subcellular localization depend on the cell cycle and degrade rapidly at the end of cell division (22). CENPF is defined as a biomarker of cell proliferation in various malignant tumors, including breast cancer (23), HCC (22), and other tumors (24). Researchers have reported that CENPF may be a biomarkers in diagnosis and prognosis of HCC (22,25). In the present study, we found that CENPF was also up-regulated in both TCGA integration analysis and qRT-PCR validation. CENPF was co-expressed with CTD-2510F5.4 in both early and late HCC. CTD-2510F5.4 expression is positive correlation with prognosis in lung adenocarcinoma (26). CTD-2510F5.4 is a malignant phenotype associated lncRNAs and a biomarker for the diagnosis and prognosis of gastric cancer (27). Therefore, we hypothesized that CTD-2510F5.4 might be involved in progression of HCC by regulating CENPF.

Extracellular matrix protein 1 (ECM1), an 85 kDa glycoprotein, is involved in a number of biological processes including mineralization, cell proliferation and angiogenesis. ECM1 modulates the epithelial–mesenchymal transition progression and cell proliferation of breast cancer via regulating the association between β-catenin and the MUC1 (28). Chen et al. found that ECM1 accelerates migration and invasion of HCC via mediating epithelial-mesenchymal transition (29). In this study, we found that ECM1 was down-regulated in both TCGA integration analysis and qRT-PCR validation, and ECM1 was co-expressed with HAND2-AS1 in both early and late HCC. A study has suggested that HAND2-AS1 is down-regulated in HCC tissues, and HAND2-AS1 is associated with invasion of HCC cells (30). Here, HAND2-AS1 was reduced in HCC, which provided further evidence for previous study. Therefore, we speculated that HAND2-AS1 might be involved with the pathogenesis of HCC through regulating ECM1.

In summary, a total of 1,201 shared DEmRNAs and 162 shared DElncRNAs were identified in both early and late HCC compared with normal controls. Among which, CDK1, KIFC1, CENPF, ECM1, CTD-2510F5.4 and HAND2-AS1 were identified as potential biomarkers for HCC. Overall, the confirmation results of qRT-PCR were generally consistent with our integrated analysis. Several limitations of our study should be mentioned. More samples are needed to validate expression of DEmRNAs and DElncRNAs. Besides, in vivo and in vitro experiments are necessary to reveal biological functions of DEmRNAs and DElncRNAs in HCC in future study.

Conflicts of Interest: All authors have completed the ICMJE uniform disclosure form (available at http://dx.doi.org/10.21037/tcr-19-2238). The authors have no conflicts of interest to declare.

Ethical Statement: The authors are accountable for all aspects of the work in ensuring that questions related to the accuracy or integrity of any part of the work are appropriately investigated and resolved. This study was approved by the institutional ethics committee of The Third Hospital of Hebei Medical University (No. 2018-025-1) and conducted in accordance with the Declaration of Helsinki (as revised in 2013). The signed informed consents of all the participants were obtained.