Osteosarcoma (OS) is the most common malignant bone tumor, accounting for 17% of primary bone tumors, and 42% of primary malignant bone tumors (1). OS most commonly affects children, adolescents, and young adults. According to recent reports, there are approximately 900 new cases of OS per year in the United States, of which 400 cases are children and adolescents, accounting for 3.4% of all childhood tumors (2). The typical presentation of OS includes the onset of pain and swelling in the affected bone. The treatment for OS is mainly neoadjuvant chemo-therapy followed by surgical removal of the primary tumor along with all clinically evident metastatic disease, plus the addition of adjuvant chemotherapy after surgery (3). Although the treatment has advanced a lot since it was described in the medical literature as early as the mid-19th century, the overall effect is still not satisfactory, especially the advancement of treatment to improve prognosis (3). Hence, it is necessary to explore new targets for treatment to improve its clinical outcomes.

Encouragingly, increasing evidence has demonstrated that non-coding RNAs (ncRNAs) play significant roles in OS development (4,5). MicroRNAs (miRNAs), which are ~20 nt long, have been the most studied ncRNA. Dysregulation of miRNA expression is the common cause of initiation, progression, and metastasis in many types of malignancy, including OS (6,7). MiR-494, located on chromosome 14q32.31, was recently reported to function as a suppressor in tumorigenesis by promoting tumor cell apoptosis (8-10). However, with respect to miR-494 and OS, studies are limited. Apoptosis signal regulating kinase 1 (ASK-1) is a component of tumor necrosis factor-α (TNF-α)-induced apoptosis complex I, and its activation (phosphorylation) is required for TNF-α-induced apoptosis in multiple cell types (11,12). To prevent TNF-α-induced apoptosis, serine-threonine kinase receptor-associated protein (STRAP) and 14-3-3 proteins interact with ASK-1 to disrupt associations between TNF receptor-associated factor 2 and ASK-1 upon TNF-α stimulation (11,12).

In this study, we suggested a hypothesis that miR-494 suppressed OS development through ASK-1/STRAP/TNF-α pathway, and explored the prognostic value of miR-494 in OS, thus provided a new approach to improve the prognosis of OS.

From May 2012 to April 2016, a total of 87 OS patients [53 male and 34 females; median age: 14, interquartile range (IQR): 9–23] diagnosed in our hospital were included in this study. 100 age- and gender-matched controls (60 male and 40 females; median age: 13, IQR: 8–24) from the physical examination center were also enrolled. For patients, blood sample was collected on the morning of the day of operation. OS tissue (OST) and the corresponding paracancerous tissue (PT) (at least 3 cm away from tumor tissue) were also obtained during the surgery. For controls, blood samples were collected at the time of physical examination. This project was conducted in accordance with the Declaration of Helsinki (as revised in 2013) and approved by the Ethics Committee of Guizhou Provincial People’s Hospital (Guizhou, China). Reference number: L201201021. Written informed consent was provided before sample collection.

Nude mice (male, aged 5–6 weeks) were purchased from the Guizhou Laboratory Animal Engineering Technology Center. In the process of feeding and experiments, humane care was given according to the 3R principle. After 1 week of feeding, mice were randomly divided into the OS group (n=20) and the sham group (n=10). Mice in OS group were subcutaneously injected 10 µL Matrigel (Corning, Wiesbaden, Germany) solution containing 1.5×106 MG-63 cells (transfected with si-miR-494 or si-NC) into the right dorsal limb. After injection, mice were continued fed for 6 weeks. Tumor volume was measured using a vernier caliper every week. Forty µL tail vein blood of each mouse was collected before modeling and after 6 weeks of modeling. Then mice were anesthetized and the subcutaneous tumor was removed. All animal experiments were approved by the Guizhou Laboratory Animal Engineering Technology Center.

In vitro migration was performed using Corning chambers (8 mm pore). Matrigel (Becton, Dickinson and Company, USA) was used to cover the upper side of the filter, then cell suspension (containing no FBS) was added to the upper chamber. And the lower chamber was added with culture containing 10% FBS. After incubated for 48 h, cells were stained using crystal violet, and the invasive cells were counted under a light microscope.

Lysates were generated from cells. The lysates were precleared with Protein G beads. Thereafter, the precleared lysates were incubated with 5 µg/mL of anti-ASK-1 antibody (8662; Cell Signaling Technology) or normal rabbit IgG (5 µg/mL) using a constant rotation at 4 °C. Two hours later, protein G beads were added and incubated for another 2 h. After washed by lysis buffer, protein G beads were boiled in 1× Laemmli buffer, and the co-precipitated complexes were then separated on SDS-PAGE and used for western blotting analysis.

Immunohistochemistry staining was performed on paraffin sections. Briefly, sections were deparaffinized and rehydrated, and antigen retrieval was performed in citrate (pH 6.0) for 10 min at full pressure using a pressure cooker. After treated with 3% hydrogen peroxide for 15 min to inhibit endogenous peroxidase activity, sections were incubated overnight at 4 °C with antibodies against cleaved caspase-3 (ab2302, Abcam, USA). After washed in PBS, sections were incubated with peroxidase-labeled anti-rabbit IgG for 30 min. Finally, all slides were incubated with DAB-Substrate (Beyotime, China) and counterstained in hematoxylin before they were dehydrated and mounted.

After discharged from hospital, researchers followed patients up by telephone every half month for 24 months. The endpoint was the death within follow-up, or patients quitting the study within 24 months.

This project was conducted in accordance with the Declaration of Helsinki and approved by the Ethics Committee of Guizhou Provincial People’s Hospital (Guizhou, China). Reference number: L201201021. Written informed consent was provided before sample collection. All animal experiments were approved by the Guizhou Laboratory Animal Engineering Technology Center. 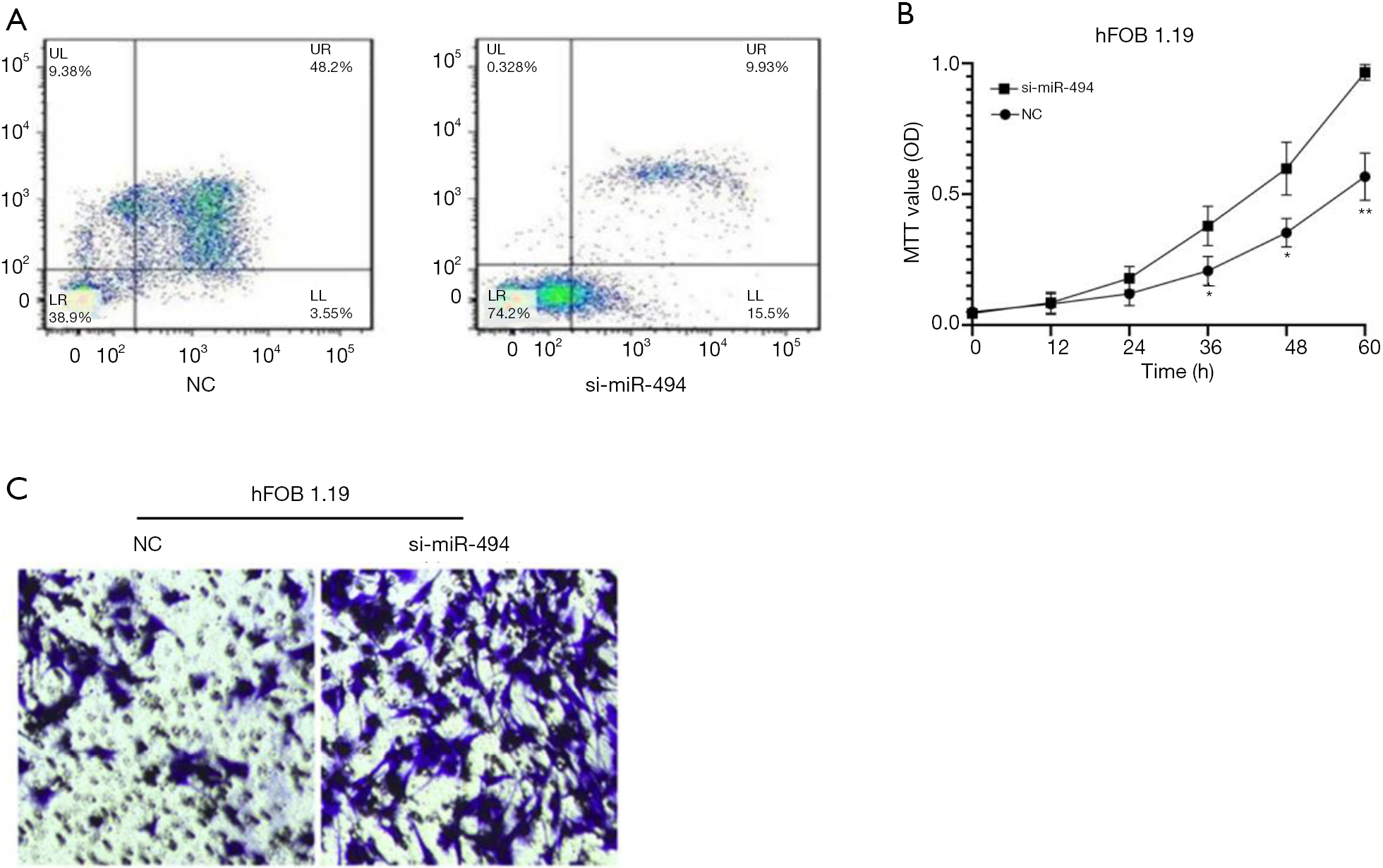 We next performed co-IP to dissect the molecular mechanism of miR-494 suppressing OS growth. The results showed that si-miR-494 significantly decreased the phosphorylation of ASK-1, enhanced ASK-1/STRAP/14-3-3 complex formation and inhibited the interaction between TNF-α and p-ASK-1 in hFOB 1.19; while miR-494 mimic markedly increased the phosphorylation of ASK-1, reduced ASK-1/STRAP/14-3-3 complex formation and enhanced the interaction between TNF-α and p-ASK-1 in MG-63 (Figure 4A,B,C,D,E,F). 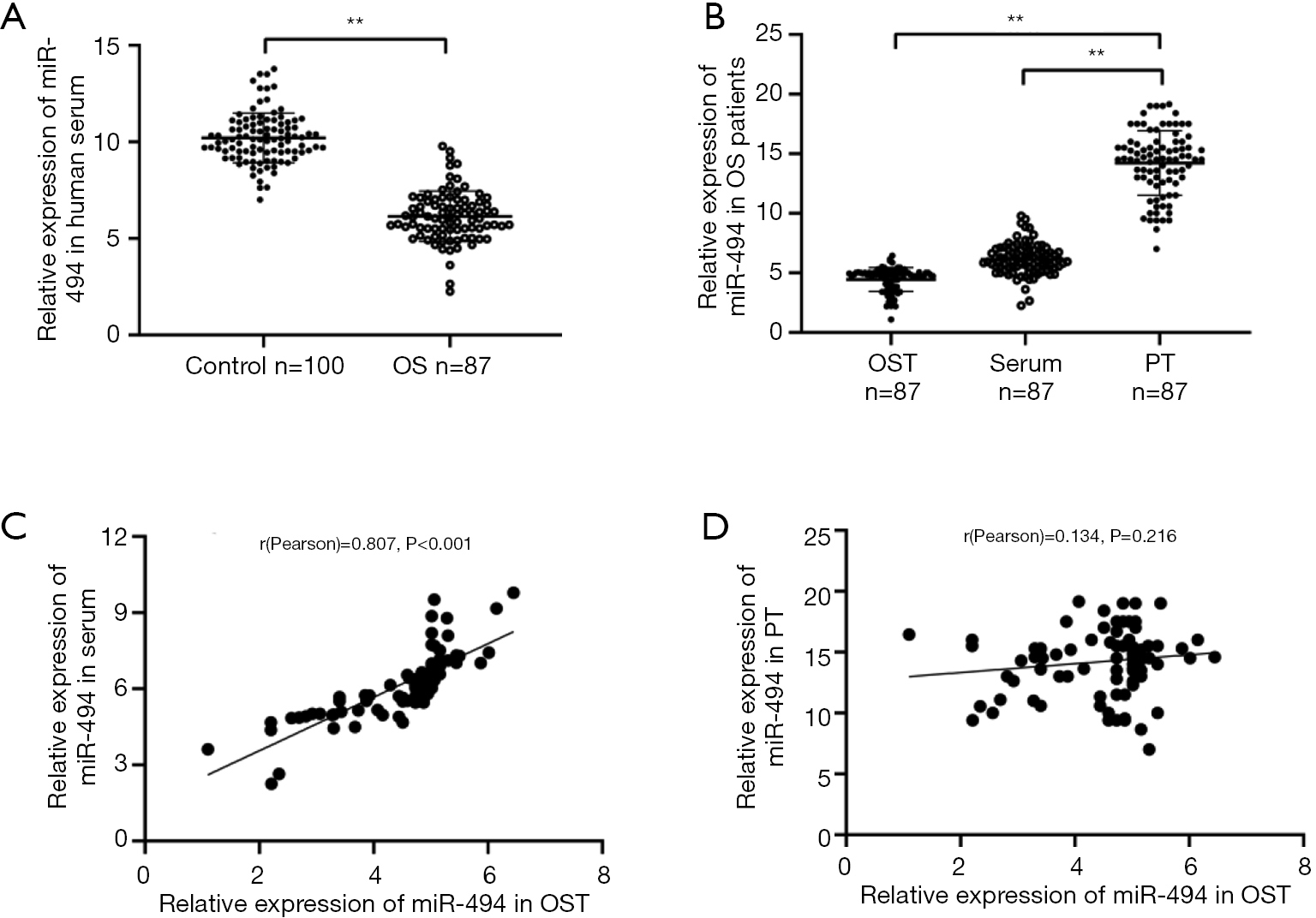 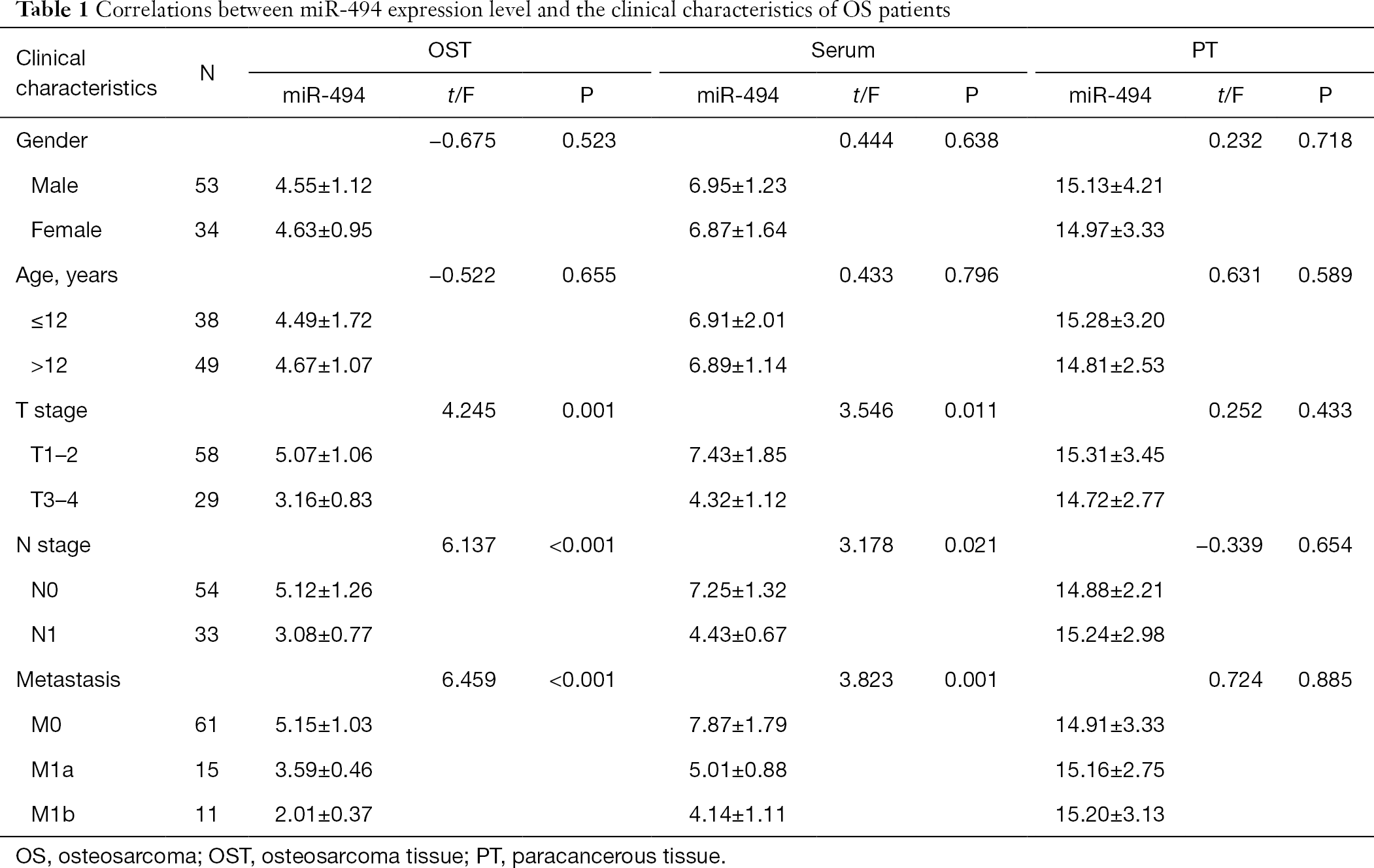 In the present study, we found that miR-494 was down-regulated in OST, and its expression level was positively correlated with its serum level, and negatively correlated with TNM stages of OS. In vitro study indicated that miR-494 inhibited the interaction of ASK-1/STRAP/14-3-3 complex to promote the activation of TNF-α/ASK-1-mediated apoptosis, and further reduced the proliferation and invasion ability of OS cells. In addition, our study also suggested that low miR-494 expression levels in both OST and serum indicated a poor prognosis of OS within 24 months by mortality increased approximately six times.

Before our study, several documents had reported the function of miR-494 in cancer metastasis. MiR-494 was firstly identified in human retinoblastoma in 2009 by Zhao et al. (13). Subsequently, miR-494 was found to be dysregulated in various malignancies such as prostate cancer (14), bladder cancer (15), hepatocellular carcinoma (16), and non-small-cell lung cancers (17), and was proved to be involved in the metastasis of these malignant tumors. With respect to miR-494 and OS, studies are still limited. Sun et al. found that miR-494 inhibited OS development by targeting and repressing the expression of matrix metallopeptidase 9 (18). MiR-494 can also inhibit proliferation and metastasis of OS through repressing insulin receptor substrate-1 and targeting CDK6 (19,20). However, the underlying mechanisms deserve more exploration, and no study has yet investigated the relationship between miR-494 expression and the prognosis of OS. In our study, for the first time, we explored the expression pattern of miR-494 in both animal models and OS patients. The results congruously showed that, compared with PT, miR-494 was down-regulated in OST, and its level was negatively correlated with the T stage, lymph node metastasis and distant metastasis of OS. In addition, for the first time, we observed a significant positive correlation between miR-494 levels in serum and OST, which means detecting miR-494 by a noninvasive approach is available. Animal studies suggested that miR-494 may function as a pro-apoptosis, anti-proliferation, and anti-invasion factor. We further dissected the mechanism of miR-494 repressing OS development. Results showed that miR-494 promoted the phosphorylation of AKS-1, and inhibited ASK-1/STRAP/14-3-3 complex formation to enhance the activation of TNF-α/p-ASK-1-mediated apoptosis. These results indicated that miR-494 is a key regulator in OS cell apoptosis process. However, more researches are needed to verify this in the future. Since miR-494 expression was negatively correlated with the TNM stages of OS, we next performed survival analysis in OS patients within 24 months to verify the prognostic value of miR-494. The results showed that compared to patients with high miR-494 expression, patients with low miR-494 expression (both in OST and serum) trended to have a poor prognosis in 24 months, with mortality increased approximately six times, which is consistent with our hypothesis.

There are still some limitations to this study. First, the sample size was relatively small, and all the subjects were from the same hospital, which may bias the results, thus studies including larger sample size from multicenter are still highlighted. Second, the follow-up time of this study was limited to 24 months, and the survival outcomes after 24 months were not investigated. However, as the results showed, the overall survival rates within 24 months have been significantly different between H and L groups (both in OST and serum), suggesting that miR-494 at least has predictive value for survival outcomes within 24 months. As for its predictive value for longer-term outcomes, it remains to be explored in future research.

In conclusion, this study investigated the function of miR-494 in OS development and its prognostic value, and the results suggested that miR-494 may improve OS prognosis by repressing OS development via modulating apoptosis complexes, which may provide us a new invention target for OS therapy.

We thank all of the subjects enrolled in this study.

Conflicts of Interest: Both authors have completed the ICMJE uniform disclosure form (available at http://dx.doi.org/10.21037/tcr-19-2195). The authors have no conflicts of interest to declare.

Ethical Statement: The authors are accountable for all aspects of the work in ensuring that questions related to the accuracy or integrity of any part of the work are appropriately investigated and resolved. This project was conducted in accordance with the Declaration of Helsinki (as revised in 2013) and approved by the Ethics Committee of Guizhou Provincial People’s Hospital (Guizhou, China). Reference number: L201201021. Written informed consent was provided before sample collection. All animal experiments were approved by the Guizhou Laboratory Animal Engineering Technology Center.