The incidence and mortality for gastric cancer (GC) have been appreciably declining for several decades. However, GC is still the fourth most common cancer and the second leading cause of cancer deaths worldwide (1-3). In China alone, there were about 679/100,000 of new GC cases and 798/100,000 of death GC cases and accounting for the third of malignant tumor incidence and mortality in 2015 (4). The pathogenesis of GC is multifactorial, including genetic susceptibility and environmental factors, cell cycle, DNA repair, metabolism, cell-to-cell and cell-to-matrix interactions, apoptosis, angiogenesis, and immune surveillance contribute to cancer development (5). However, although there have been extensive previous studies on the molecular mechanism of GC formation and progression, the molecular mechanism of GC is not yet clear. Due to high morbidity and mortality in GC, it is urgently important to reveal the causes and the underlying molecular mechanisms. Thus, identifying novel diagnostic and prognostic biomarkers remains critical importance for stomach cancer.

In this work, we have downloaded four original microarray datasets GSE79973 (6), GSE26899 (7), GSE54129 (8), GSE63089 (9), from NCBI-Gene Expression Omnibus database (NCBI-GEO), there are total of 262 GC cases and 88 normal cases available. differentially expressed genes (DEGs) between cancer tissues and normal tissues were obtained from GEO and TCGA gene expression profile, respectively. Then, we overlapped the four GEO and TCGA gene expression profiles and identified 204 overlapped genes, DAVID was used to perform GO enrichment analysis and KEGG enrichment analysis on the overlapped genes. Next, some analysis has been performed to screen the key genes, including: the Kaplan-Meier analysis, univariate and multivariate-cox analysis for overall survival (OS). In addition, to evaluate and validate the prognostic value of the key genes, we performed the correlation analysis between TMN and expression of key genes based on TCGA data, the Kaplan-Meier analysis based on the online website including Kaplan-Meier plotter and OncoLnc, ROC analysis for OS and DFS, univariate and multivariate-cox analysis for DFS. Furthermore, the co-expressed genes associated with GC were identified by using Coexpedia, the biological processes and KEGG-signaling pathway were predicted via using R software. Finally, Gene set enrichment analysis (GSEA) was performed to further investigate pathways of four key genes that may be associated with GC.

Identification and processing of microarray data

We used the “GC” OR “gastric carcinoma” keyword to search gene expression profiles from GEO database (http://www.ncbi.nlm.nih.gov/geo/), and four qualified gene expression profiles (GSE54129, GSE79973, GSE63089, GSE26899) were identified with platform and series matrix file(s) being downloaded as TXT files, type of data were RMA signal intensity and standardized, and log2 transformed. The dataset information was presented in Table 1.

Identification of DEGs and overlapped genes

The DAVID database (https://david.ncifcrf.gov/) is an essential foundation for the success of any high-throughput gene function analysis. We used DAVID to perform GO annotations analysis on overlapped genes.

To further investigate pathways of four key genes that may be associated with GC, GSEA was performed using the JAVA program (http://www.broadinstitute.org/gsea) with TCGA dataset. Expression of each key gene was set to annotate phenotypes, 1,000 times were performed for gene set permutations. The nominal P value <0.05 was used to sort the pathways enriched in each phenotype. 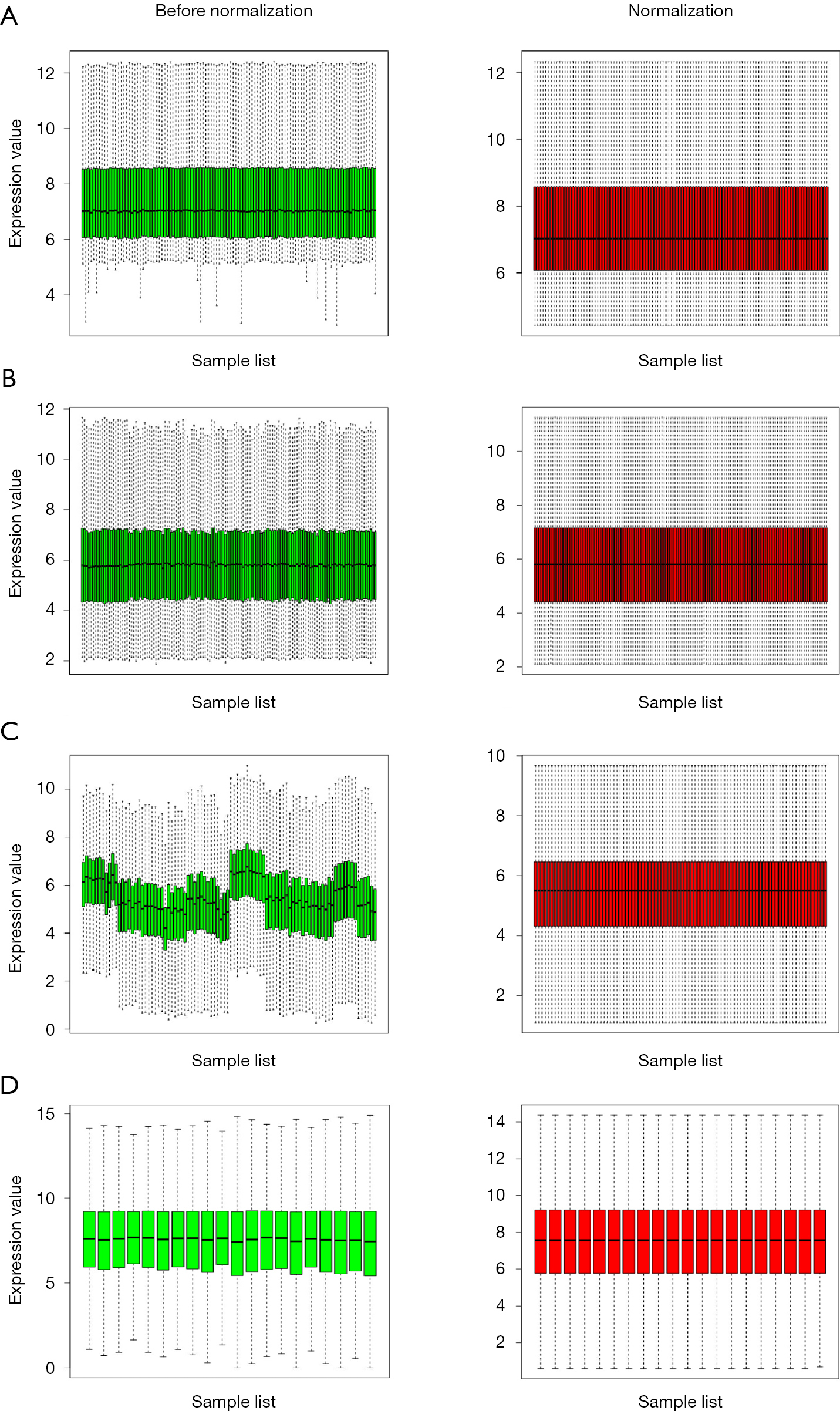 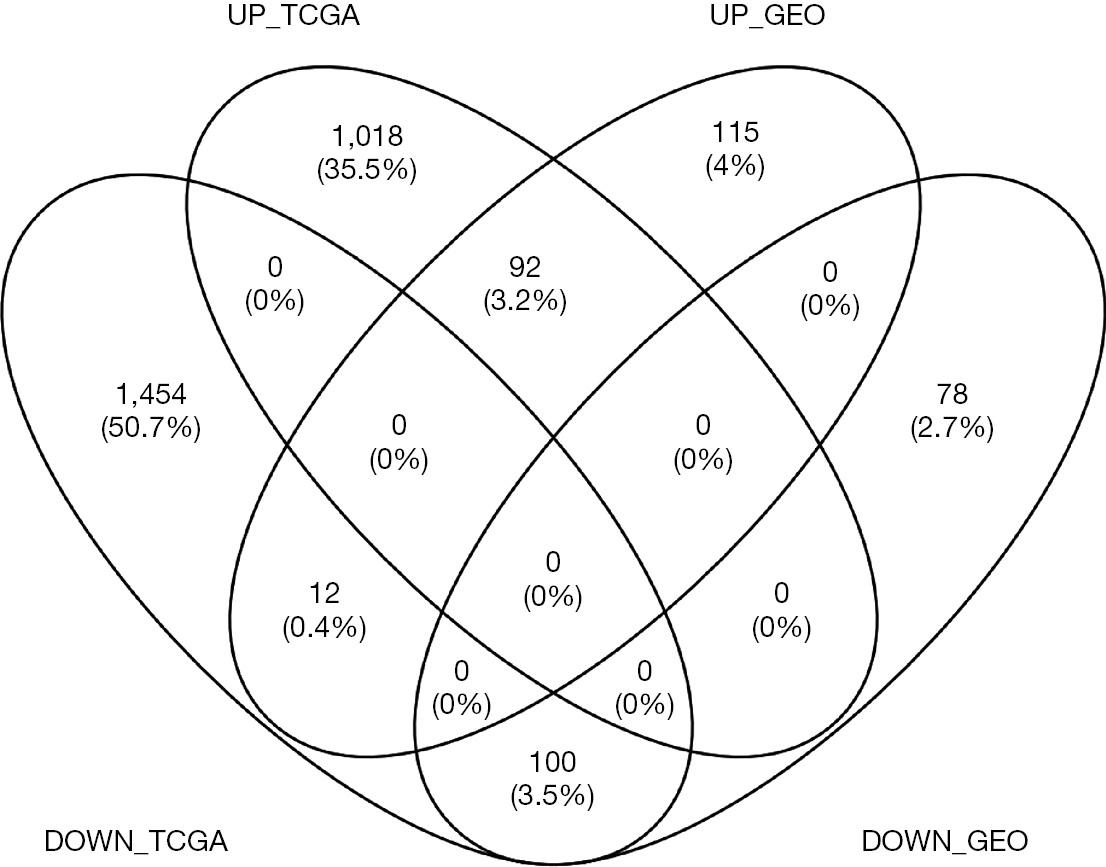 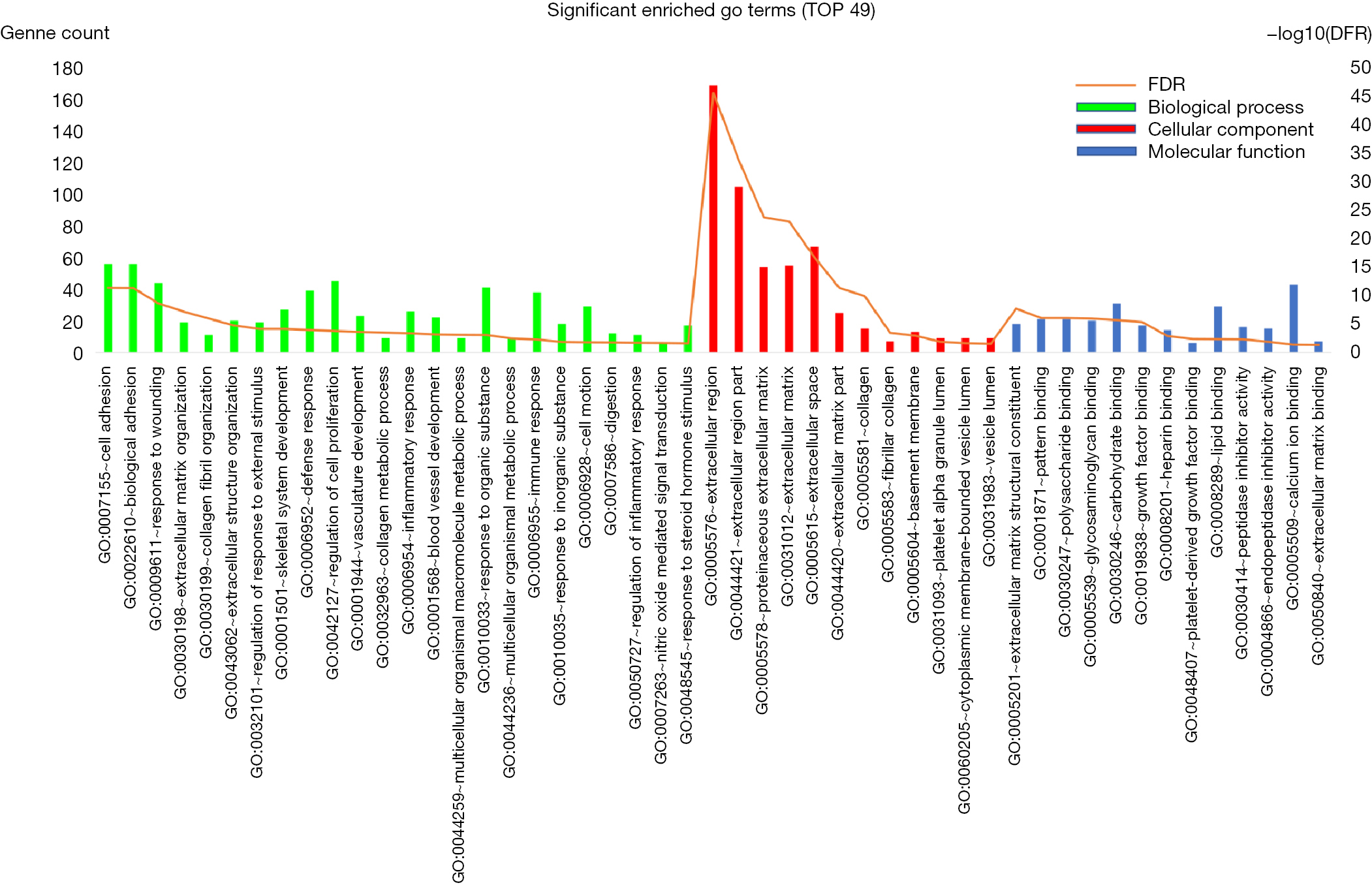 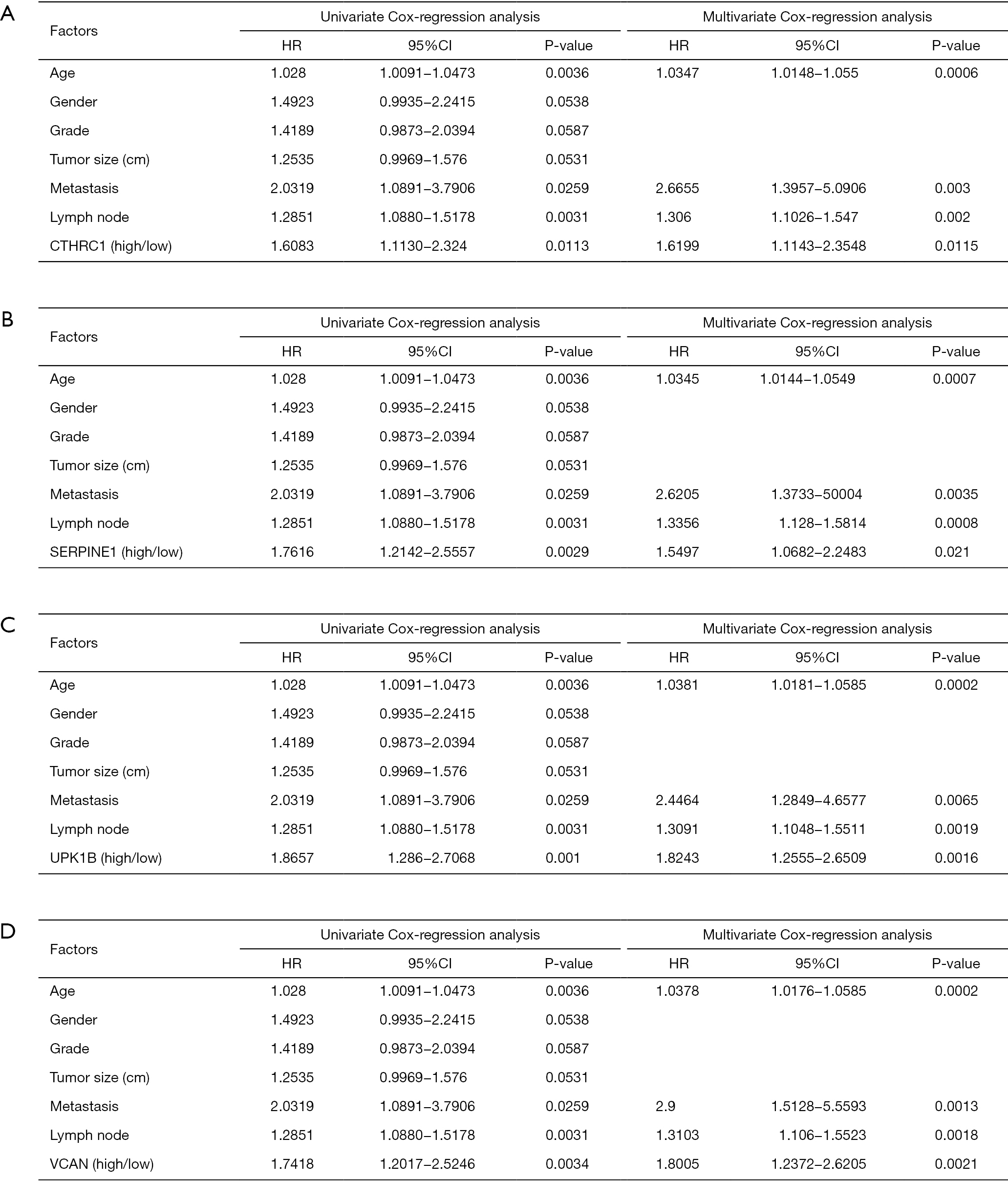 Prognostic significance for the four genes 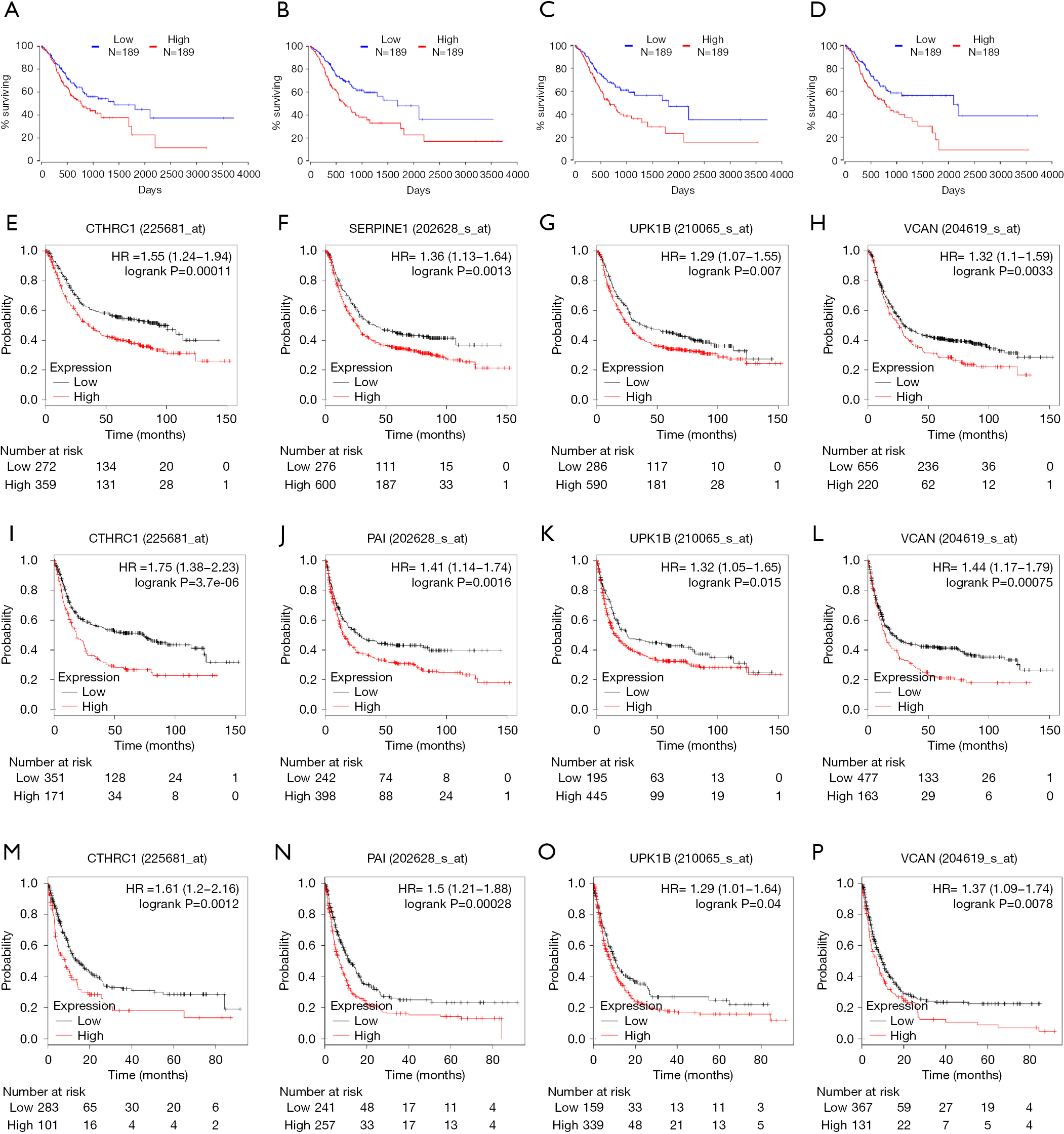 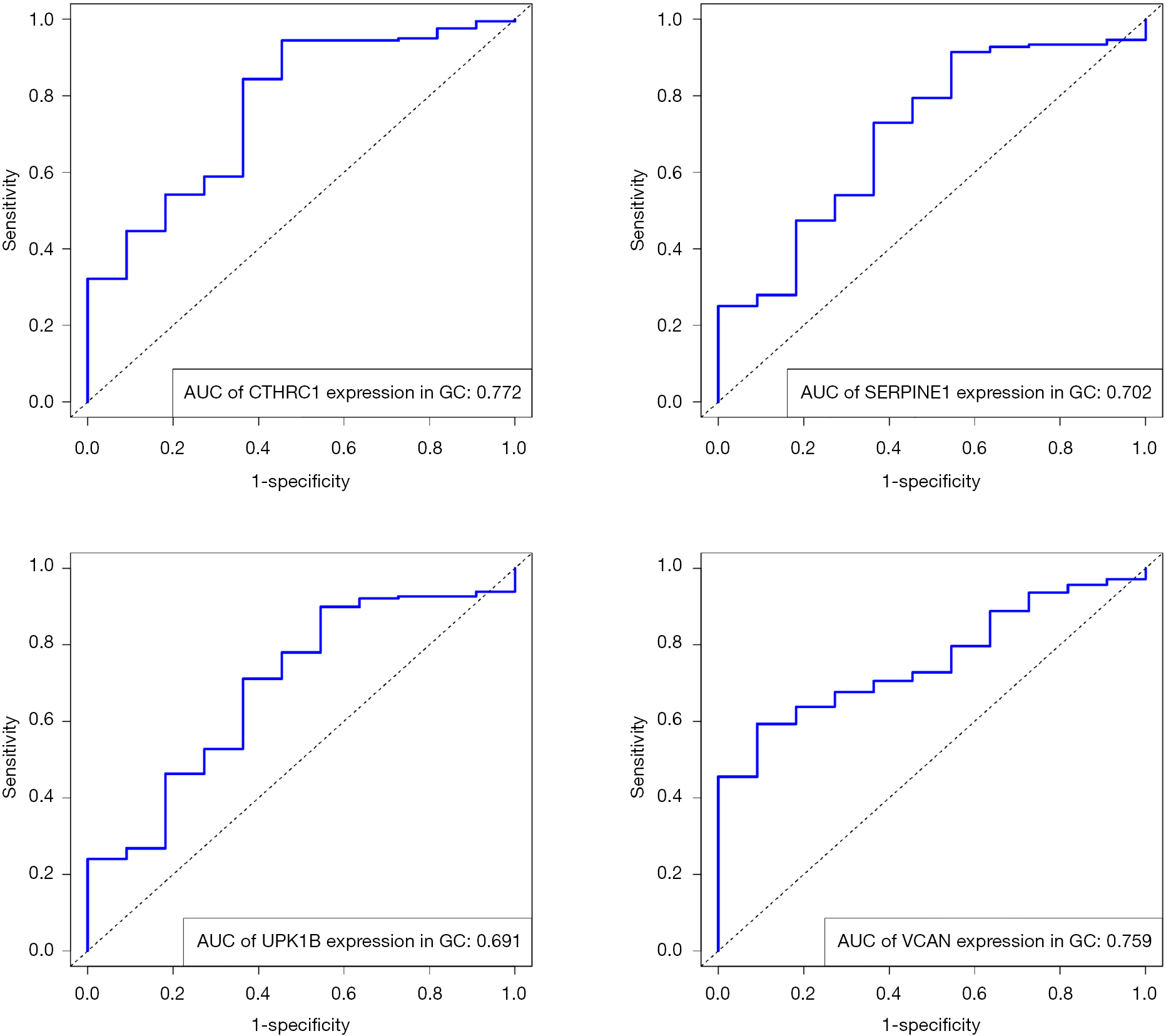 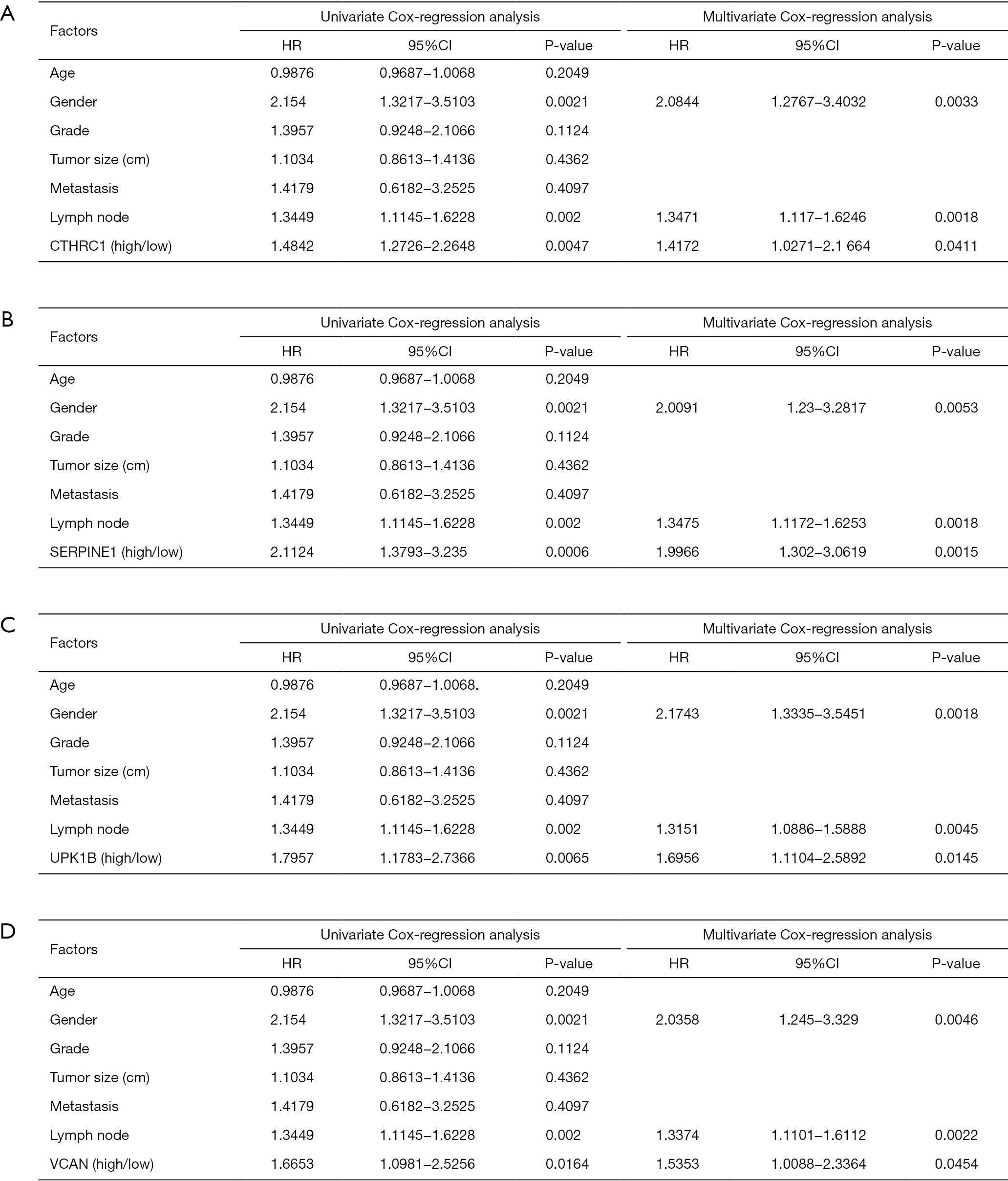 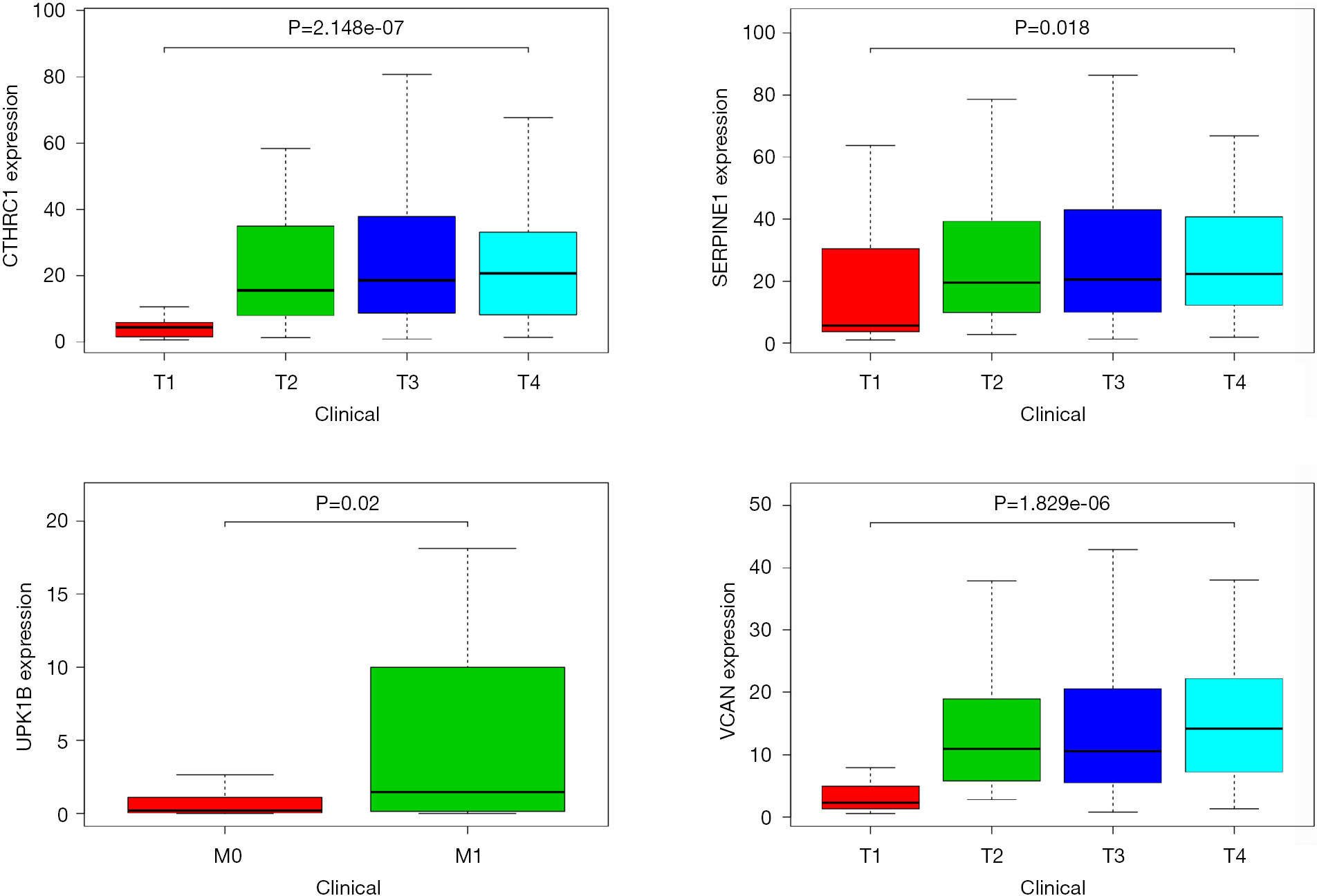 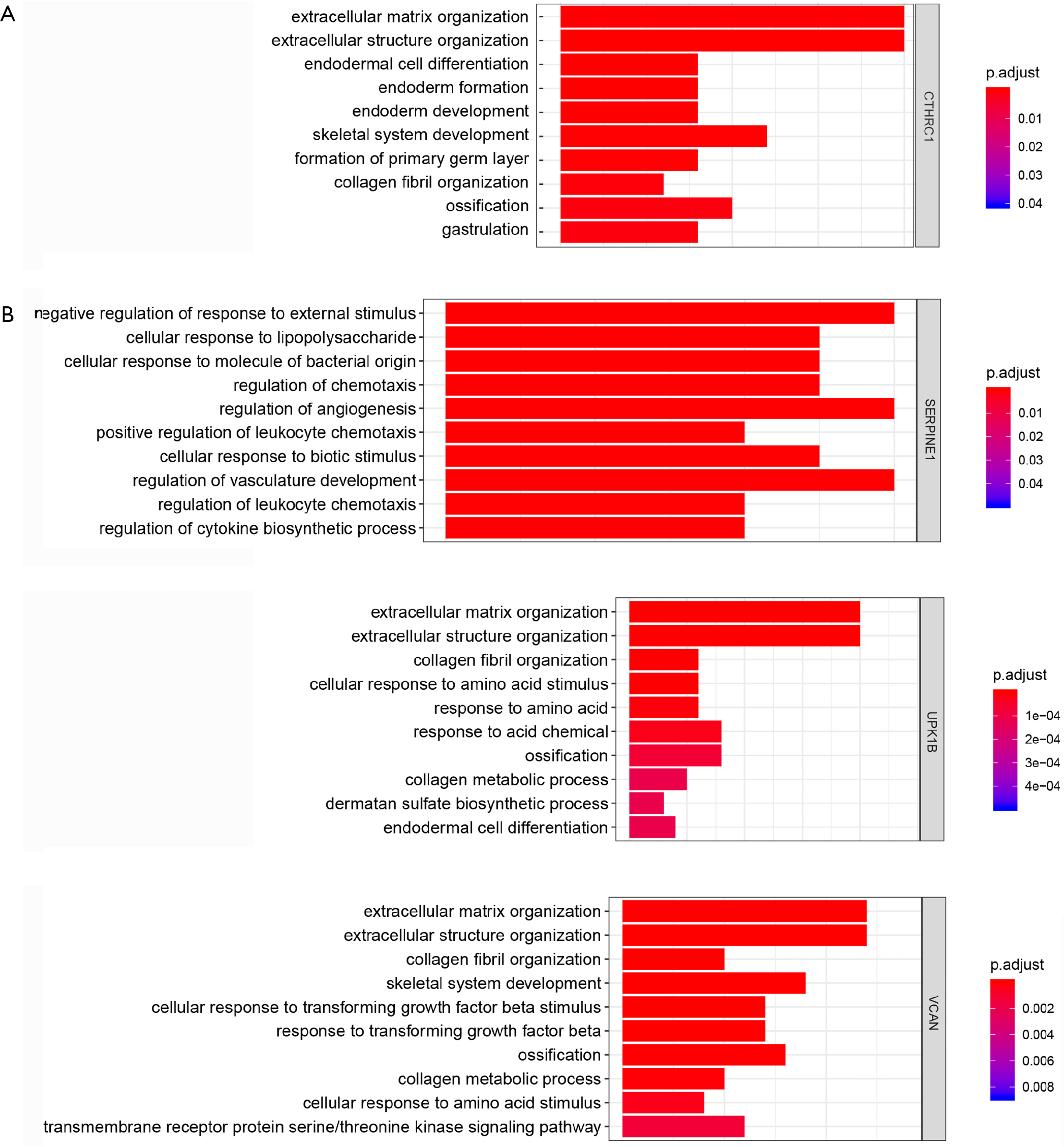 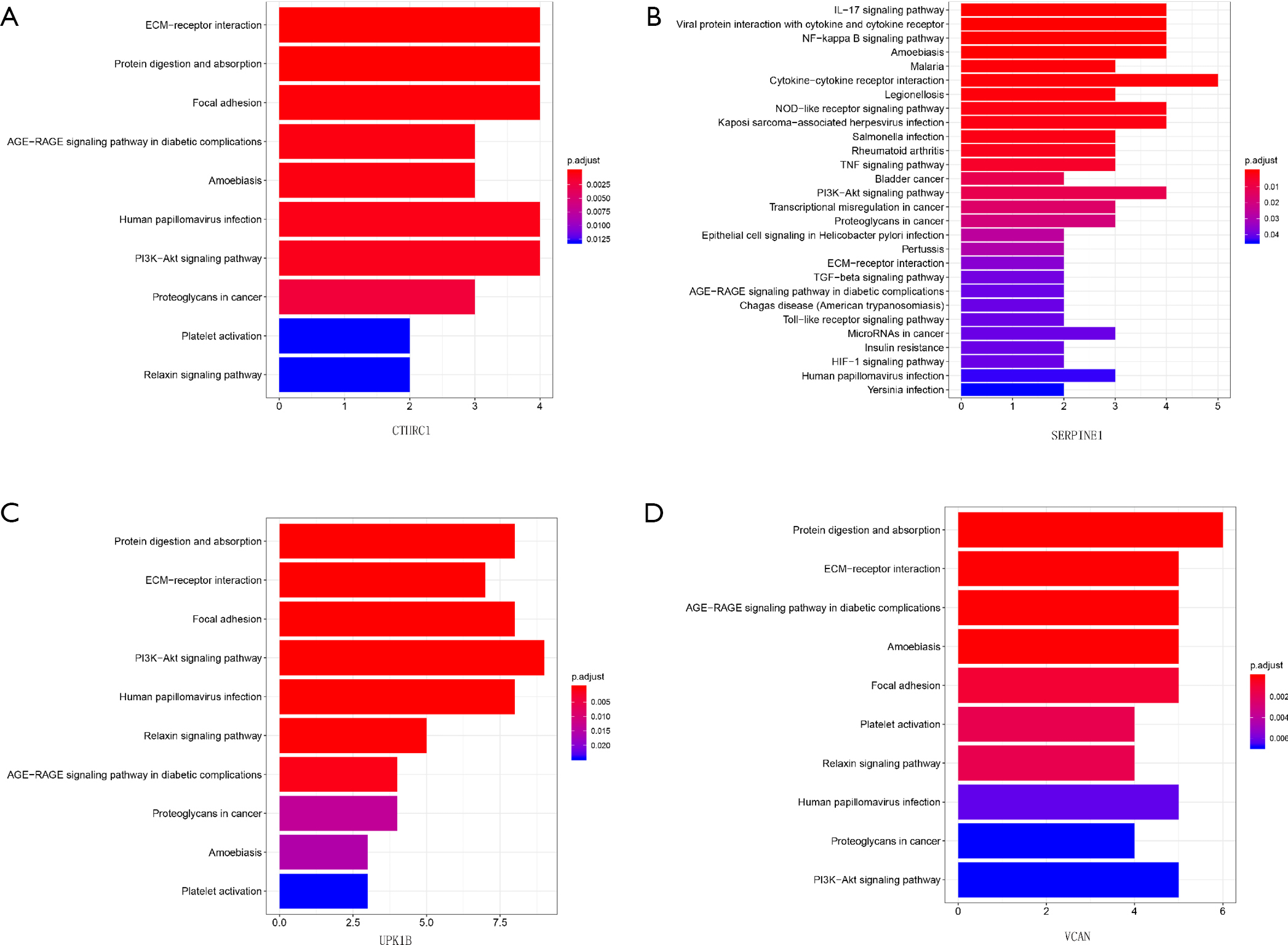 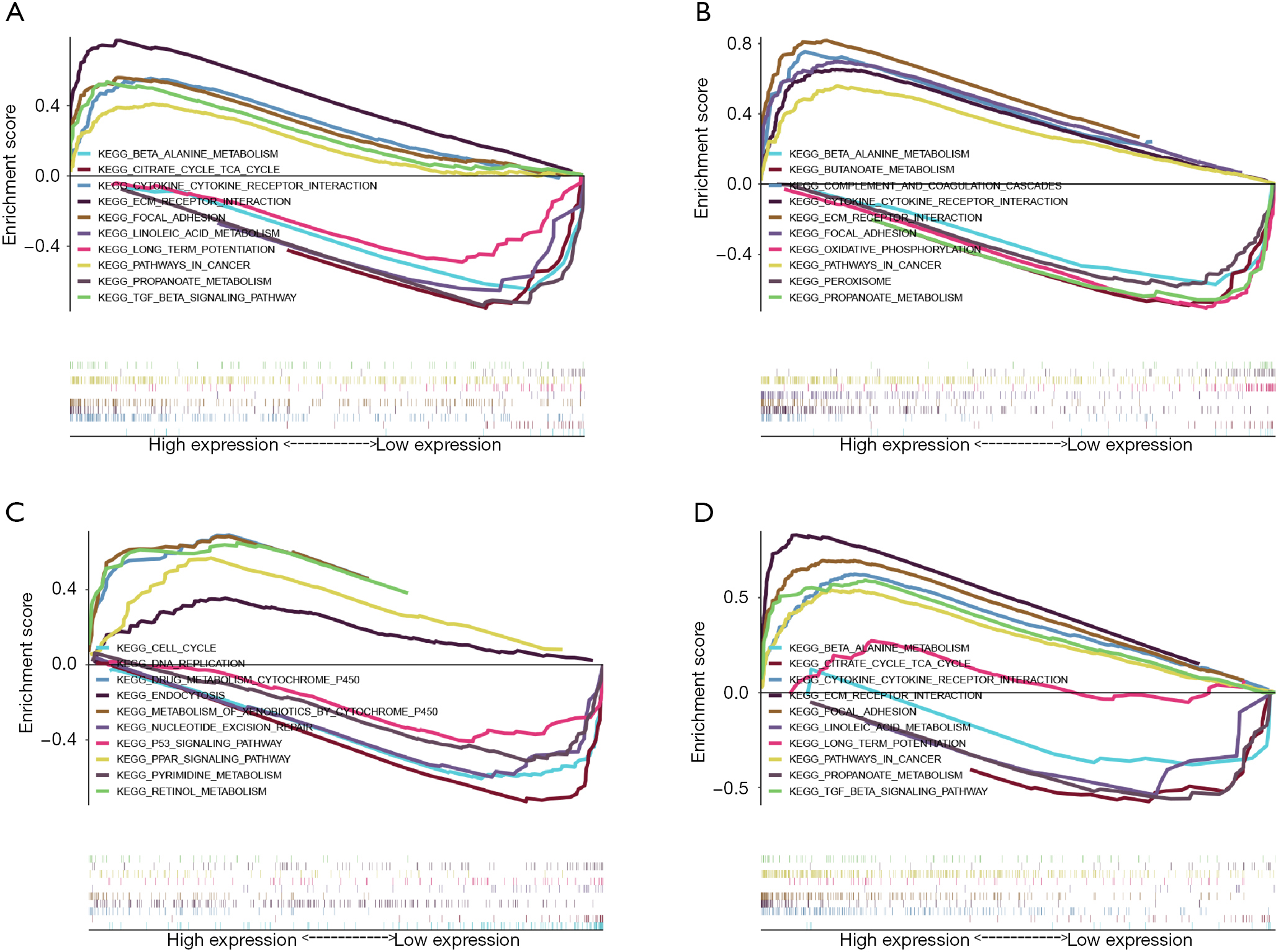 GC is one most common malignant cancer worldwide and it is very difficult to treat the advanced-stage SC. Although the formation, progression and underlying mechanisms for GC have been revealed from some basic and clinical studies, the incidence and mortality of GC is still very high worldwide (10). Therefore, it is necessary to identify novel prognostic and therapeutic target for GC.

UPK1B is a structural protein on the surface of urothelial cells1, which was considered as the entirely specific for urothelium, recent studies have indicated that UPK1B also expressed in other tissues, including bladder, brain, eye, kidney, lung, stomach (11). UPK1B may promote the occurrence and development of cancer (12,13), UPK1B could promote the proliferation, invasion and metastasis in bladder cancer (14,15). Su et al. (16) showed abnormal expression of UPK1B in various types of cancers. However, the role of UPK1B in GC has not been reported. In this study, the different expression level between normal and cancer is of significance, high gene expression was significantly associated with a shorter OS, UPK1B is significant diagnostic factor in GC. The expression level was associated with distant metastasis, UPK1B may participate in the biological processes (extracellular matrix organization, collagen fibril organization, collagen metabolic process, endodermal cell differentiation) through ECM-receptor interaction, PI3K-Akt signaling pathway, relaxin signaling pathway to promote the metastasis in GC.

The CTHRC1 gene belongs to chromosome 8q22.3, which encoded a protein to participate in the vascularity and bone formation and so on (17). The expression level was different between normal tissue and tumor tissue for some types of tumors, including breast cancer (18), cervical cancer (19), colorectal cancer (20), liver cancer (21) and GC (22), the aberrant expression level was associated with poor OS and progression-free survival and it was the independent prognostic marker in GC in GC, which was consistent with our result. Recently, Ding et al. (23) have reported that HIF-1α/CXCR4 signaling may be involved in the migration and invasion in GC, however, the underlying molecular mechanism for CTHRC1 promoting the occurrence and development of GC is not very clear. In this study, we identify several signaling pathway which may be involved in the occurrence and development of GC.

SERPINE1 gene encodes plasminogen activator inhibitor type 1, which participated in inhibiting tissue plasminogen activator and uridylyl phosphate adenosine, the aberrant expression in many types of cancer and SERPINE1 could be an independent risk factor for various types of cancers, including head and neck cancer (24,25), esophageal cancer (26), bladder cancer (27), melanoma (28). Li et al. (29) indicated SERPINE1 is a poor prognosis for GC, and SERPINE1 could promote tumour cell proliferation, migration, and invasion by regulating EMT. However, SERPINE1 still remains largely unknown in GC. In our study, SERPINE1 was an significant diagnostic factor in GC, and we found the expression level of SERPINE1 was associated with depth of invasion, the potential signal pathways may participated in the biological process including NF-kappa B signaling pathway, PI3K-Akt signaling pathway, Toll-like receptor signaling pathway.

VCAN is a chondroitin sulfate proteoglycan, a member of the aggregating chondroitin sulfate PGs family, which is an important component of ECM (30). Verscan expression often occurs in the context of tissue remodeling, angiogenesis, including: follicular growth (31), inflammation (32), wound healing (33) or atherosclerotic lesions (34), and environmental significance around progressive tumors (35). It has been previously reported that tumor stromal cells play an important role in tumor formation and tumor progression (36), and VCAN is expressed and secreted by tumor stromal cells. Yeung et al. indicated that CAF-specific VCAN was up-regulated by TGF-β signal to promote tumorigenesis and invasion in ovarian cancer (37). The level of VCAN increased in many patients with malignant tumors includes colon cancer (38), rectal cancer (39), melanoma (40), odontogenic cancer (41), and ovarian cancer (42). In vitro and in vivo research, it has shown that VCAN can promote the proliferation, metastasis and invasion of cancer cells (43-45), with playing an important role in the formation of extracellular matrices that support tumor growth and metastasis. Shen et al. (46) reported that VCAN expression can be used as a prognostic indicator for GC patients, VCAN expression is higher in cancer tissues than in adjacent tissues, and could promote proliferation and invasion in GC cells. However, few literatures mentioned VCAN associated signaling pathways that promote the development of GC. We identified some signaling pathways that may be involved in the development of GC. This regulatory mechanism needs to be further elucidated.

However, further biological experiments should be performed to validate our results.

We are grateful to the reviewers for their constructive comments which led to improvements in this manuscript. In addition, thanks to Bin Zhao (Official Wechat Account: Bio_Med2017) of Xiamen University for suggestions on the manuscripts.

Funding: This study was supported by Xiamen Scientific and Technological Plan (No. 3502Z20194005).

Conflicts of Interest: All authors have completed the ICMJE uniform disclosure form (available at http://dx.doi.org/10.21037/tcr-20-211). The authors have no conflicts of interest to declare.