Treatment and prognosis of primary malignant melanoma of the esophagus

Primary malignant melanoma of the esophagus is a rare disease which has been described only occasionally in case reports. It accounts for only 0.1% to 0.5% of all primary esophageal malignancies (1). Due to the improvement of equipment, and a higher awareness of the disease, in the general population, the early diagnosis rate of esophageal malignancies has improved. However, because the disease is easy to metastasize early, the survival rate is still low. This article lists the patients with esophageal malignant melanoma admitted to our hospital in the past ten years, as well as their related diagnosis, treatment and prognosis, in order to further understand the disease.

Patients with PMME who had undergone treatment at Zhejiang Cancer Hospital between January 2009 and September 2019 were retrospectively identified (Table 1). Patients’ clinical stages were determined according to the 2002 American Joint Committee on Cancer (AJCC) tumor-node-metastasis (TNM) classification. Recurrence or metastases were confirmed using chest computed tomography (CT), as well as bone scan and/or computed tomography of the abdomen. The histologic types were determined based on the 2004 WHO classification. Pathological examination of surgically removed specimens. Immunohistochemical staining was performed using human melanoma protein 45 (HMB-45), melanin A protein (Melan-A), S-100 protein, and cytokeratin (CK) (Table 2). Patients who died from another disease not related to Malignant melanoma were excluded from the current study. The study was reviewed and approved by the Institutional Ethics Committee of Zhejiang Cancer Hospital (IRB-2020-44), and conducted in accordance with the Declaration of Helsinki (as revised in 2013). Written informed consent was obtained from all patients.

For patients who underwent a surgical intervention, all were examined in the outpatient clinic at 3-month intervals for the first 2 years and, thereafter, at 6-month intervals. For patients at an advanced stage, the follow-ups were at 6 to 8 weeks apart. The last follow-up time point was September, 30, 2019. The median follow-up of patients was 48 months, ranging from 17 to 92 months.

Disease-free survival (DFS) covered the time from surgery to progression or death from any cause. Progression free survival (PFS) was defined as the date from the date of treatment to the confirmation of overall disease progression. The definition of overall survival (OS) was based on the date of treatment and the most recent follow-up or date of death. Assuming P<0.05 is statistically significant, statistical analysis was performed using SPSS version 19 (SPSS Inc., Chicago, Illinois, USA). Evaluation of DFS, PFS and OS using Kaplan-Meier method and log-rank test.

According to 2002 TNM classification, 9 patients of malignant melanoma were included in the study. There were 6 males and 6 females in this group, aged 46–74 years, with a median age of 62 years. Clinical characteristics of all patients are listed in Table 1. According to 2002 TNM classification, stage II in 5 patients, stage III in 2 patients, and IV in 2 patients at diagnosis. In case 9, computed tomography (CT) scans revealed huge tumor in the lower esophagus (Figure 1A) and multiple nodules in the abdominal cavity at diagnosis (Figure 1B). Esophagoscope revealed filling defect in the lower part of the esophagus (Figure 1C). Blue-violet nodule visible under gastroscope (Figure 1D). 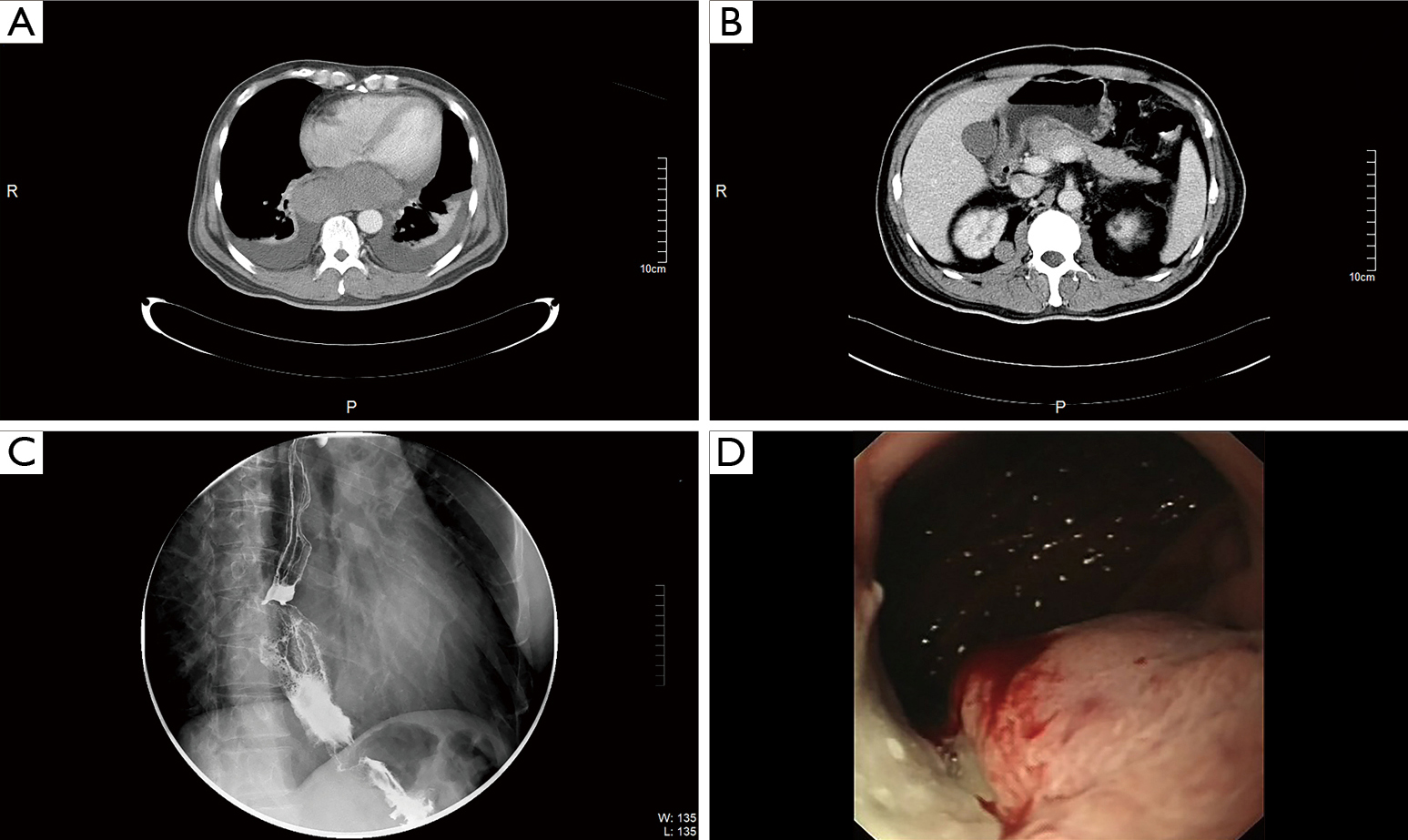 Four patients received surgery and three of them were received postoperative chemotherapy, two of them (2/4) were diagnosed with recurrence. For stage II patient (case 5), he received postoperative radiotherapy and chemotherapy with two cycles of TP regimen (docetaxel 75 mg/m2 d1; Cisplatin 75 mg/m2 d1). Disease progression was in October 2018 and the DFS was 10.0 months. The patient showed the presence of metastases in Mediastinal lymph node. Needle biopsy indicated the pathological pattern was Malignant melanoma. Then he received chemotherapy in January 2019 with two cycles of TMZ (temozolomide) + cisplatin+ anti-angiogenesis treatment and supraclavicular and mediastinal lymph node tumor radiotherapy. The patient was alive with no evidence of progression disease to date.

For stage IV patient (case 9), he received chemotherapy (Oxaliplatin 130 mg/m2 + Fluorouracil 500 mg/m2 + docetaxel 75 mg/m2) in December 2008 with two cycles with and efficacy evaluation was stable disease (SD). However, the patient experienced gastrointestinal bleeding in February 2009. Thoracic surgeons believed that although the patient was staged late, there was no indication for surgery, but the patient had bleeding, palliative surgery to remove bleeding lesions, which may have been helpful to his life. The esophageal tumor biopsy showed the malignant melanoma. Unfortunately, the patient eventually died of lung infection 20 days later.

Esophageal malignant melanoma often occurs in the lower and middle esophagus, which is reported to account for about 90%, and the incidence of men is significantly higher than that of women (2). The incidence of the middle and lower position is similar to the data of our team (88.9%). Studies have shown that the median age of diagnosis is 60.5 years, and the ratio of male to female is 2:1 (3). The clinical manifestations of the disease are similar to those of other esophageal malignancies. Patients often experience eating sensation, non-specific post-sternal pain, acid reflux and other gastrointestinal symptoms and weight loss, occasionally hematemesis and melena, and some patients may be asymptomatic. Currently, most PMME are reported in the case, and there are few large retrospective or prospective studies. The early diagnosis and treatment of esophageal malignant melanoma is still difficult due to the lack of support from large clinical data. PMME has a poor prognosis with a 5-year survival rate of less than 5% (4). A retrospective clinical study at Peking University included 76 patients with an OS of only 22.3 months (95% CI: 16.4–28.2). Stage IV and stage III patients were 19.5 months. The OS for one year and two years was 79.2% and 38.9% respectively. The median OS of patients who were newly diagnosed as distant patients was 15.8 months, and the average survival rate of patients with stage III disease with metastatic or unrespectable resection was 22.8 months from the date of first diagnosis (P=0.032) (5).

At present, endoscopic biopsy is still one of the effective methods for diagnosing malignant melanoma. Primary esophageal melanoma is often covered by squamous epithelium, and melanocytes tend to concentrate on the lesion, which makes it difficult to identify lesions under endoscopy (6). Therefore, Pathologist are always using immunohistochemistry (IHC) to confirm the diagnosis. In the review of the literature, the rate of positivity with cytokeratin was reported to be 7% (7). In most cases, HMB-45, Melan-A, and S-100 are simultaneously expressed instead of express CK. S-100 seems to be the most sensitive biomarker for melanoma, while HMB-45 and Melan-A demonstrate relatively good specificity but not as good sensitivity as S-100 (8). HMB-45 is an anti-melanoma-specific monoclonal antibody that is 100% specific for malignant melanoma. The tumor cells in our group were diffusely expressed HMB-45, Melan-A, S-100 scattered, CK negative, consistent with the literature reports (9). In our cases, the rate of HMB-45 is 100%, and so does S-100 and Melan-A.

Due to the rare disease, there is no international consensus on the treatment of esophageal melanoma. But surgery is still a common treatment for PMME. In our group, five patients received surgery while one of them was palliative resection. However, it has been reported in the literature that the interval between the initial surgery and the recurrence is only 4.5 months. Therefore, there are more experts to explore postoperative adjuvant therapy treatment. Also, three of them received postoperative chemotherapy in our group. As early as 2013, researchers have suggested that TMZ-based adjuvant chemotherapy can improve Recurrence-free survival (RFS) and OS of mucosal melanoma (10). However, Chemotherapy is not satisfactory for patients with advanced PMME. Weiner et al. reported OS of chemotherapy of only 7.7 months and 3-year OS of 0 in eight patients (11). Wang et al. (5) reported the overall response rate (ORR) of chemotherapy was only 10.9% with a short PFS of three months also. In the past five years, with the development of targeted therapies and immunotherapy, there are more options for the treatment of advanced melanoma. Due to the large span of the age, and the lack of understanding of mucosal malignant, a large number of mucosal patients have not been genetically tested; in domestic research, the kit mutation is about 20%. BRAF 600 16% or so mutation. Up to 25% of patients with cutaneous melanoma have BRAF 600 mutations. The BRAF inhibitors vemurafenib and dabrafenib improve survival in advanced patients. However, compared to the skin, mucosal malignant BRAF mutation rates are lower.

Mucosal melanoma is one of the major subtypes of melanoma in China. It is not sensitive to traditional chemotherapy, and the response rate to single-agent immunotherapy is extremely limited. Immunotherapy may be a new way out. In recent years, studies have shown that anti-PD-1 (programmed death-1) antibodies have achieved a certain effect on patients with advanced melanoma. Some of data is derived from the treatment of mucosal melanoma. D’Angelo et al. (12) reported PD-1 checkpoint inhibitor monotherapy achieves unsatisfactory clinical outcomes in patients with mucosal melanoma for median progression-free survival was 3.0 months (95% CI, 2.2 to 5.4 months), for patients who were treated with nivolumab combined with ipilimumab, Median progression-free survival was 5.9 months. Meanwhile, the incidence of grade 3 or 4 treatment-related adverse events also increased significantly.

Wang et al. (5) reported PD-1checkpoint inhibitors proved to be activity against PMME. Results suggested a response rate of 75% with 11.4 months median duration of response. Additionally, multivariate survival analysis showed that IT systemic treatment was correlated with a significant OS benefit. Some of researchers shows that monotherapy with PD-1 checkpoint inhibitor alone is not effective in treating mucosal melanoma, especially in patients with visceral metastases (12), the ORR rate is only 17.65% (13). However, other studies have shown that the response rate in esophageal malignant melanoma is higher. At present, the Beijing Cancer Hospital of China has published a conclusion that with the axitinib plus toripalimab reach to 70%. The disease control rate (DCR) of axitinib combined with toripalimab is as high as 86%, the ORR was 51.7%, and the mean response time (TTR) was 2.1 months. The median PFS was 7.5/8.9 months and the median OS had not been reached. The mucosal malignant monotherapy PD1 has low efficacy, but combining this with anti-vascular multi-target inhibitors significantly improve the efficacy (14). The mucosal malignant monotherapy PD1 has low efficacy, but combined with anti-vascular multi-target inhibitors significantly improve the efficacy. Therefore, more basic research is needed, including mechanisms, biomarkers, etc. for further validation.

The major limitations of our study are its retrospective analysis and small number of patients. However, with no cases in prospective clinical studies and treatment is lack, our retrospective study can also be considered to be meaningful.

In conclusion, PMME is a rare, with the discovery of BRAF or KIT gene mutations, immunotherapy offers new methods in the treatment of patients, but complete surgical resection remains the primary treatment. I hope that more randomized controlled trials will lead to reliable data to develop primary malignant melanoma of the esophagus diagnosis and treatment specifications.

Conflicts of Interest: All authors have completed the ICMJE uniform disclosure form (available at http://dx.doi.org/10.21037/tcr-19-2349). The authors have no conflicts of interest to declare.

Ethical Statement: The authors are accountable for all aspects of the work in ensuring that questions related to the accuracy or integrity of any part of the work are appropriately investigated and resolved. The study was reviewed and approved by the Institutional Ethics Committee of Zhejiang Cancer Hospital (IRB-2020-44), and conducted in accordance with the Declaration of Helsinki (as revised in 2013). Written informed consent was obtained from all patients for publication of this manuscript and any accompanying images.