Modern radiological techniques, especially computed tomography (CT), can aid the detection of more early-stage lung cancer. On CT images, early-stage lung cancer is often displayed as ground glass opacity (GGO). According to the appearance or absence of solid components in the lesion, GGO lesions can be classified into pure GGO (pGGO) and mixed GGO (mGGO). Meanwhile, mixed GGO could be further divided into GGO-predominant and solid-predominant. The pathologies of malignant GGO are commonly associated with lung adenocarcinoma (1). In 2011, the International Association for the Study of Lung Cancer (IASLC), the American Thoracic Society (ATS), and the European Respiratory Society (ERS) proposed an International Multidisciplinary Lung Adenocarcinoma Classification (2). There are five subtypes of invasive adenocarcinomas (IAs), including acinar, lepidic, papillary, micropapillary, and solid predominant. Adenocarcinomas with a predominant lepidic growth pattern and an invasive component size >5 mm were classified as lepidic predominant adenocarcinomas (LPAs). Patients with adenocarcinoma in situ (AIS) and minimally invasive adenocarcinoma (MIA) had an almost 100% disease-specific survival with complete surgical resection compared to that in patients with stage I adenocarcinoma with 30% recurrence rate (3). Patients with LPA had significantly better prognosis than patients with other IAs. Therefore, the lepidic component is regarded as a precursor of an invasive tumor. Several studies have demonstrated AIS as a precursor of IA. Considering the dramatic differences in the clinical outcome across this spectrum of lung adenocarcinomas, it is obvious that these newly defined pathological intermediates represent clinically relevant entities and present an opportunity to understand events in disease progression.

Autophagy is considered as a cellular catabolic process, and it exerts an essential role in the degradation of cellular components in lysosomes or recycles long-lived proteins and organelles (4). Autophagy plays a dual role in malignant tumors, as both a suppressor and a promoter, depending on the context the cancer cells stay in. Thus, the modification of autophagy has potential value in cancer therapy (5,6). Beclin-1, the firstly identified mammalian autophagy-related gene or protein, plays a vital role in the initiation and the regulation of autophagy. Previous publications demonstrated that defects in autophagy exerts an important role in tumorigenesis and tumor progression (7). Moreover, the decreased expression of Beclin-1 has been reported to be correlated to the primary tumor growth in NSCLC (8). The carcinogenesis and evolution of lung cancer is a multistep changing process. However, whether Beclin-1 has role in the progression of lung adenocarcinoma presenting as GGO is not yet confirmed. Therefore, to assess the role of autophagy in lung adenocarcinoma, we detected the expression of Beclin-1 in 108 patients with lung preinvasive and invasive lesions, and analyzed its relationship with the patients’ clinicopathological factors. The present study aims to (I) determine the changes in the expression levels of autophagy genes and proteins involving in the occurrence and development of lung lesions in patients with atypical adenomatoid hyperplasia (AAH), AIS, MIA, and IA ; (II) investigate the potential role of autophagy in lung adenocarcinoma presenting as GGO. We present the following article/case in accordance with the REMARK reporting checklist (available at http://dx.doi.org/10.21037/tcr-20-1001).

We retrospectively evaluated the data of a series of patients with surgically resected lung lesions in Ruijin Hospital North Affiliated to Shanghai Jiaotong University School of Medicine recorded from January 2014 to December 2015. Patients with GGO lesion (≤3 cm) in lung and pathologically confirmed AAH, AIS, MIA, and IA were included. Patients with induction therapy, with positive surgical margins, or with concurrent disease progression, were excluded. Each specimen was collected from a lesion and from the normal lung tissue (NT) (>5 cm from the edge of the tumor). The resected tissue specimens were washed with physiological saline and immediately stored in a liquid nitrogen tank. Demographic information of the patients was collected. Data pertaining to clinical variables and follow-up information were gathered by reviewing the patients’ medical records. Tumors were classified based on the 2011 IASLC/ATS/ERS classification and the 2015 WHO classification. The study was conducted in accordance with the Declaration of Helsinki (as revised in 2013). The study was approved by Ethics Committee of Ruijin North Hospital (No.2017139) Ruijin Hospital North affiliated Shanghai Jiaotong University School of Medicine approved this retrospective biomarker study. and informed consent was taken from all the patients.

Cells were lysed in the radioimmunoprecipitation assay buffer, and the lysates were collected after high-speed centrifugation. The protein concentration was determined using a BCA kit (abcam), and proteins were isolated by 12% sodium dodecyl sulfate–polyacrylamide gel electrophoresis and then transferred to a 0.2-µm polyvinylidene fluoride membrane. The membrane was blocked overnight in 5% skim milk with Tris-buffered saline containing Tween-20 and then incubated overnight with antibodies for Beclin-1 (Santa Cruz Biotechnology), or β-actin (Santa Cruz Biotechnology) at 4 °C. Next, the membrane was incubated with secondary antibodies at room temperature for 60 min. The protein bands were observed on X-ray films after incubation with ECL reagents.

The endpoint of our study was overall survival (OS) that defined as survival from the date of surgery to the date of death due to cancer. All patients were followed up to January 2019. The median follow up time is 49 months, range, 37–60 months.

Grayscale values were read in Photoshop CS2.0 (Adobe, San Jose, CA, USA). Data of multiple groups were compared by one-way analysis of variance. The chi-square test was applied to compare the clinical factors between low-expression and high-expression groups. The unpaired Student’s t-test was carried out when continuous variables were normally distributed, and if not, the Wilcoxon rank sum test was used. The Cox proportional hazards model was fit to identify the significant prognostic factors for survival using SPSS Statistics 21 (IBM Inc., Armonk, New York). Overall survival (OS) was estimated using the Kaplan–Meier method and compared by log-rank test across the different groups. The date of surgical resection was set as the starting point, and the date of death or survival follow-up was set as the endpoint of OS. Continuous variables that were normally distributed were summarized using mean values and SD, and those that were not normally distributed were summarized using median and interquartile range. Differences were considered to be statistically significant when the P value was <0.05.

Relationship between Beclin-1 expression and invasiveness of lung adenocarcinoma

Role of Beclin-1 in the stepwise progression of lung adenocarcinoma 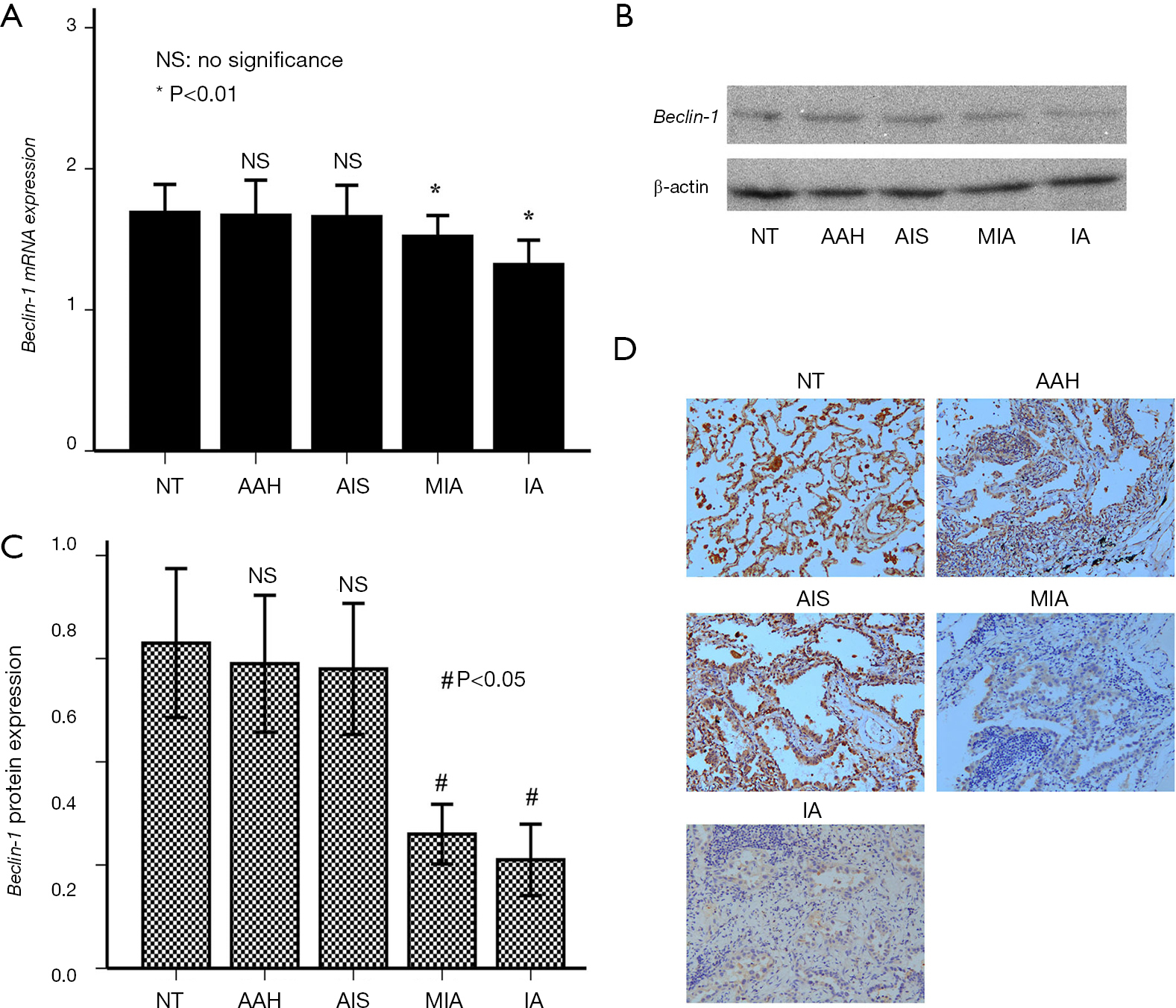 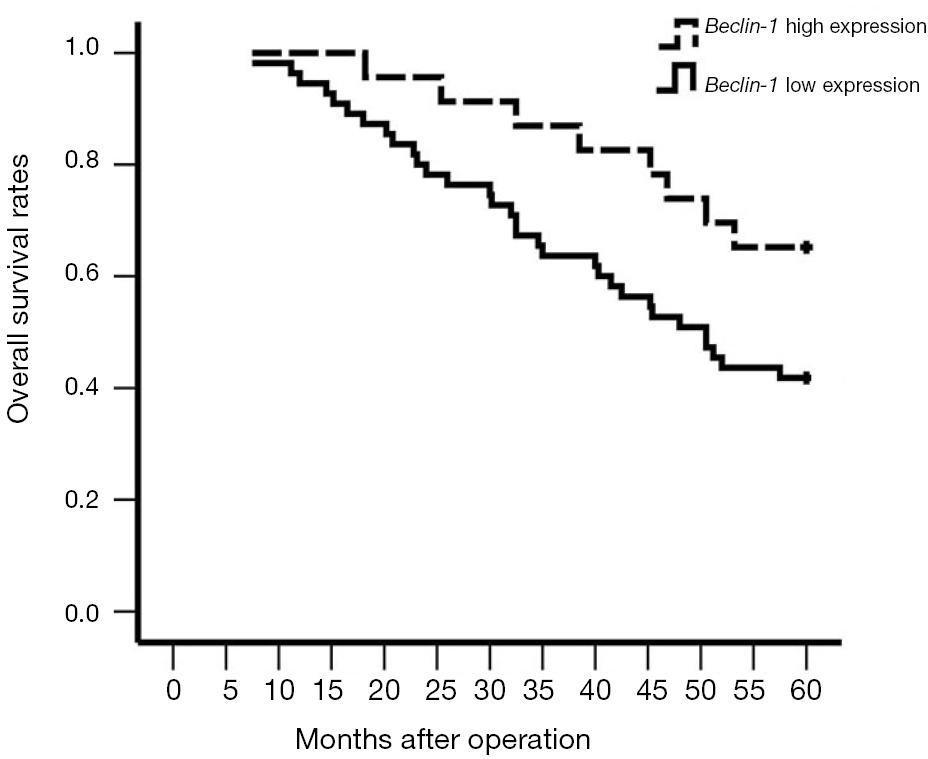 Figure 2 Overall survival of patients with lung adenocarcinoma grouped according to high and low expression levels of Beclin-1.

Autophagy is an essential pathway for the degradation of cellular components within the lysosome, and it is highly conserved from yeast to humans (9). Unlike the ubiquitin–proteasome system (UPS), which directly degrades multiple regulatory proteins in the cytoplasm and nucleus, the substrates of autophagy are extensive, such as damaged organelles, long-lived proteins, and protein aggregates. Autophagy has been confirmed to be a key regulator of carcinogenesis and may have an influence on the response of therapeutic interventions (10,11). Beclin-1 is an important factor involved in the process of autophagy. Several studies have demonstrated that Beclin-1 was related to a more invasive pathological subtype and poor prognosis (12-15). Moreover, Beclin-1-dependent autophagic function could be suppressed in human cancer by activating AKT (16,17).

The underlying mechanism involved in the suppression of carcinogenesis and progression of lung adenocarcinoma by Beclin-1 is complicated. First, Beclin-1 stabilizes the chromosome structure. Second, autophagy breaks down the damaged cellular components such as organelles. It thus prevents oxidative stress from the damaged organelles (20). Third, Beclin-1 downregulates the proliferation of cells, delays cell cycle progression, and induces autophagy and differentiation (21). Beclin-1 protein may play a significantly different role depending on the type of human cancers. Previous studies have reported complicated results regarding the prognostic impact of Beclin-1 protein expression in different human cancers. Beclin-1 expression was downregulated in liver cancer, ovarian cancer, breast cancer, and gastric cancer, indicating a worse prognostic impact (12-15). However, Beclin-1 expression was upregulated in nasopharyngeal carcinoma and was strongly associated with worse OS and RFS (22). This may be related to the intrinsic properties of the tumor type, and the nature of the therapeutic regimen in different types of malignant tumors. Autophagy may also play a different role in each type of human cancer.

However, there were several limitations in our study. First, the sample size was limited. More valid analysis could be performed only when more samples are included. Second, the basic mechanism of the role of Beclin-1 in the evolution of lung adenocarcinoma was not investigated. We could only infer the function of Beclin-1 from the clinical data. These need to be confirmed by more researches.

Reporting Checklist: The authors have completed the REMARK reporting checklist. Available at http://dx.doi.org/10.21037/tcr-20-1001

Conflicts of Interest: All authors have completed the ICMJE uniform disclosure form (available at http://dx.doi.org/10.21037/tcr-20-1001). The authors have no conflicts of interest to declare.

Ethical Statement: The authors are accountable for all aspects of the work in ensuring that questions related to the accuracy or integrity of any part of the work are appropriately investigated and resolved. The study was conducted in accordance with the Declaration of Helsinki (as revised in 2013). The study was approved by Ethics Committee of Ruijin North Hospital (No.2017139) and informed consent was taken from all the patients.