Non-small cell lung cancer (NSCLC) is the most common cause of death in lung cancer patients, which is the main subtype of lung cancer (80–85%) (1). NSCLC has a high rate of metastasis and invasiveness, which leads to a poorer prognosis of patients (2,3). Thus, determining relevant molecular targets may provide potential application in lung cancer.

The Wingless-type protein (Wnt) signaling has been linked to many human diseases, especially NSCLC (4). The Wnt family encodes 19 distinct proteins that regulate the most cellular processes, including cell proliferation, differentiation, apoptosis, and migration (5,6). Unlike the upregulation of expression of some other Wnt family members, Wnt7a is frequently downregulated in lung cancer (7). Wnt7a functions as tumor suppressor, and restoration of Wnt7a expression leads to decreased NSCLC cell proliferation (8,9). However, it is still unclear whether Wnt7a may influence NSCLC cell invasion and metastasis.

Wnt7a signaling can initiates both the canonical and non-canonical pathways in various types of tumors (10,11). The canonical pathway (or Wnt/β-catenin) involves Wnt bind to Fzizzleds (Fzds) that acts as a negative regulator of β-catenin accumulation (5,12). A previous study demonstrated that Wnt7a promoted bladder cancer cell invasion via Wnt/β-catenin (13). In addition, the non-canonical pathway includes the planar cell polarity pathway (14) and c-Jun N-terminal kinase (JNK) pathway (15). We were interested in the role of Wnt/JNK pathway in NSCLC. The JNK pathway is required for cell development, morphogenesis, and differentiation (16). It has been reported that JNK pathway promotes an epithelial cell differentiation program in response to Wnt7a and Fzd-9 coexpression in NSCLC cells (9). However, to date, little is known about which components of the Wnt7a pathway may play a critical role in NSCLC cell migration and invasion.

pcDNA6-Wnt7a plasmid was constructed by subcloning the fragment of the Wnt7a-encoding cDNA from plasmid pOTB7-Wnt7a (KRIBB. Daejeon, Korea) into pcDNA6 at the Kpn I and Xba I sites. For the transfection, approximately 1.0×105 A549 and H1650 parental cells were seeded in a 6-well plate. When the cells reached 80–90% confluence, each cell was transfected with pcDNA6-Wnt7a and pcDNA6-empty using EzWayTM Transfection Reagent (Komabiotech, Korea). According to the manufacturer’s instructions, the ratio of the plasmid to the transfection reagent was 1 µg:3 µL. At 48 h post-transfection, 20 µg/mL Blasticidin (Sigma, St. Louis, MO, USA) was added to select stable transfections, and each group was named the following: A549-Wnt7a, H1650-Wnt7a, A549-empty, and H1650-empty.

Cell proliferation assay was counted for 5 days using the 3-(4,5-Dimethylthiazol-2-yl)-2,5-diphenyltertazolium bromide (MTT) method. In brief, cells were seeded in a 96-well culture plate (5×103 cells/well) and were cultured at 37 °C with 5% CO2. Cell viability was performed by MTT (Sigma) assay every 24 or 48 h. An aliquot of 10 µL MTT solvent (5 mg/mL in phosphate-buffered saline) was added to each well. After a 2-h incubation at 37 °C, the cells were lysed and formazan crystals were dissolved in the 96-well culture plate, and then 100 µL of isopropanol with 40 mM HCl was added to each well. Optical density (OD) was measured at 560 and 620 nm on a measurement parameter editor (Tecan, Grodig, Austria).

Migration assay was performed using the Culture-Inserts (Ibidi, Regensburg, Germany) with 100 mm culture dish. Cells (5×103/100 µL) were seeded in the Culture-Inserts. Cells were placed in the 500 µm cell-free gap after a 24-h incubation. Cell migration was photographed at 0, 6, 12, and 24 h incubation, and images were captured using an inverted microscope. Three independent experiments were performed.

Cell (2×105 per well) were detached using the Transwell filter chambers (8 µm pores) that suspended in 1% gelatin/RPMI1640 overnight and dried out at room temperature. Cells were seeded in 120 µL of 0.2% bovine serum albumin (BSA) medium containing 5 µg/mL human plasma fibronectin (Calbiochem, La Jolla, CA, USA) was added to the lower chamber. Cells were allowed to invade toward the Transwells for 24-h incubation in the invasion assay. Cells were stained with Diff Quik solution (Sysmex, Kobe, Japan) and were counted in 5 select fields (each 0.5 mm2) under a light microscope.

Whole RNA was extracted using TRI reagent (Invitrogen, Carlsbad, CA, USA) according to the manufacturer’s instructions. Total RNA was reverse transcribed to cDNA using the First Strand RT-PCR Kit (Promega, Fitchburg, WI, USA) for RT-PCR. After amplification, the PCR products were separated in a 1.5% agarose gel. Signals were visualized under ultraviolet light and were quantified using the Labworks Image Acquisition (UVP, Upland, CA, USA). The reaction was first incubated at 95 °C for 3 min, followed by 30 cycles of 95 °C for 40 s, 58 °C for 40 s, 72 °C for 90 s and then 72 °C for 10 min. The primer sequences for Wnt7a were as follows: 5'-ATGCCCGGACTCTCATGAAC-3' (forward) and 5'-GTCTTGGTGGTGCACGAGC-3' (reverse). Those for the GAPDH were as follows: 5'-ACCACAGTCCATGCCATCAC-3' (forward) and 5'-TCCACCACCCTGTTGCTGTA-3' (reverse).

To verify the role of the Wnt7a gene in NSCLC cells, Wnt7a was overexpressed in H1650 and A549, which were determined by immunoblotting and RT-PCR (Figure 1A). Wnt7a protein and mRNA levels were significantly increased in H1650- and A549-Wnt7a cells compared with those of the empty vector control cells (P<0.05). These results indicated that stably expressing Wnt7a cells succeeded to invade in NSCLC cell lines compared with the empty vector control. 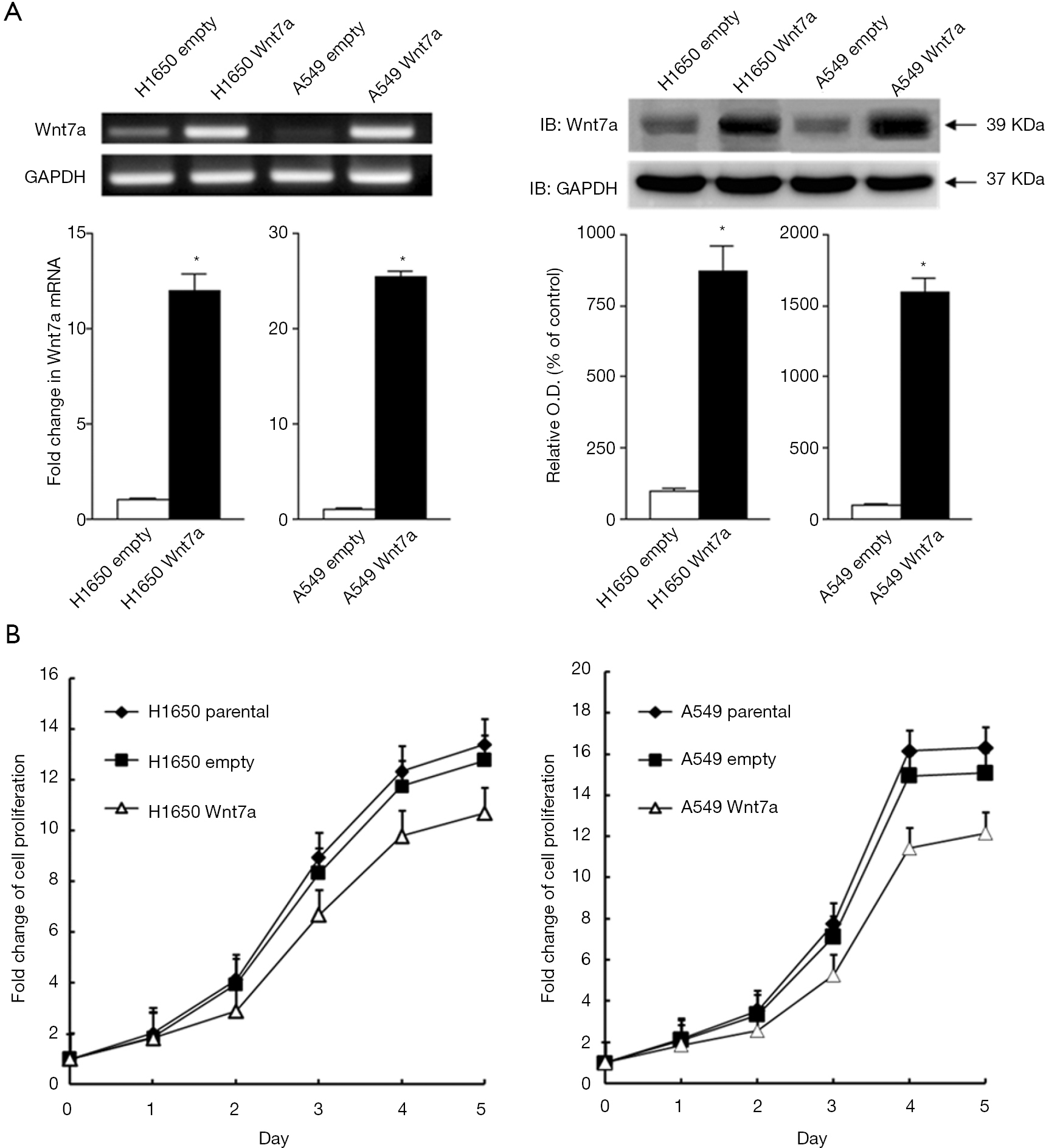 Figure 1 Overexpression of Wnt7a inhibits proliferation of A549 and H1650 cells. (A) H1650 and A549 cells transfected with pcDNA6-Wnt7a were determined by RT-PCR and by immunoblot with a GAPDH loading control. Data are expressed as the fold change of control cells (empty vector) and normalized by the corresponding GAPDH level. (B) Five thousand cells from H1650 and A549 transfected by Wnt7a or an empty vector were plated in a 12-well plate, and cell viability was measured each day by MTT assay. Results are the average and standard deviation of triplicate experiments with repeated measurements. *, P<0.05, significant difference compared with the empty vector control group. Wnt7a, Wingless-type protein 7a.

To assess the influence of Wnt7a expression on cell proliferation in NSCLC, equal amounts of H1650 and A549 cells transfected with Wnt7a or empty vector were analyzed in a 5-day growth assay. The findings revealed that Wnt7a overexpression led to decrease the cell proliferation in H1650- or A549-Wnt7a cells compared with the empty vector control cells (P<0.05, Kruskal-Wallis test, Figure 1B).

To examine whether Wnt7a overexpression could affect the NSCLC cell motility, we investigated the migration and invasion assays. The cells were photographed at 6, 12, and 24 h to record the edges of the introduced scratch. H1650 and A549 cells overexpressing Wnt7a robustly increased the capacity to migrate compared with the empty vector control (Figure 2). After a 1-day incubation for the cell invasion assay, Wnt7a overexpression significantly increased invasion into the collagen/Matrigel matrix compared with the empty vector control (Figure 3). Investigating the induction of migration and invasion with cells overexpressing Wnt7a indicates that Wnt7a expression may be involved in increasing metastasis of NSCLC. 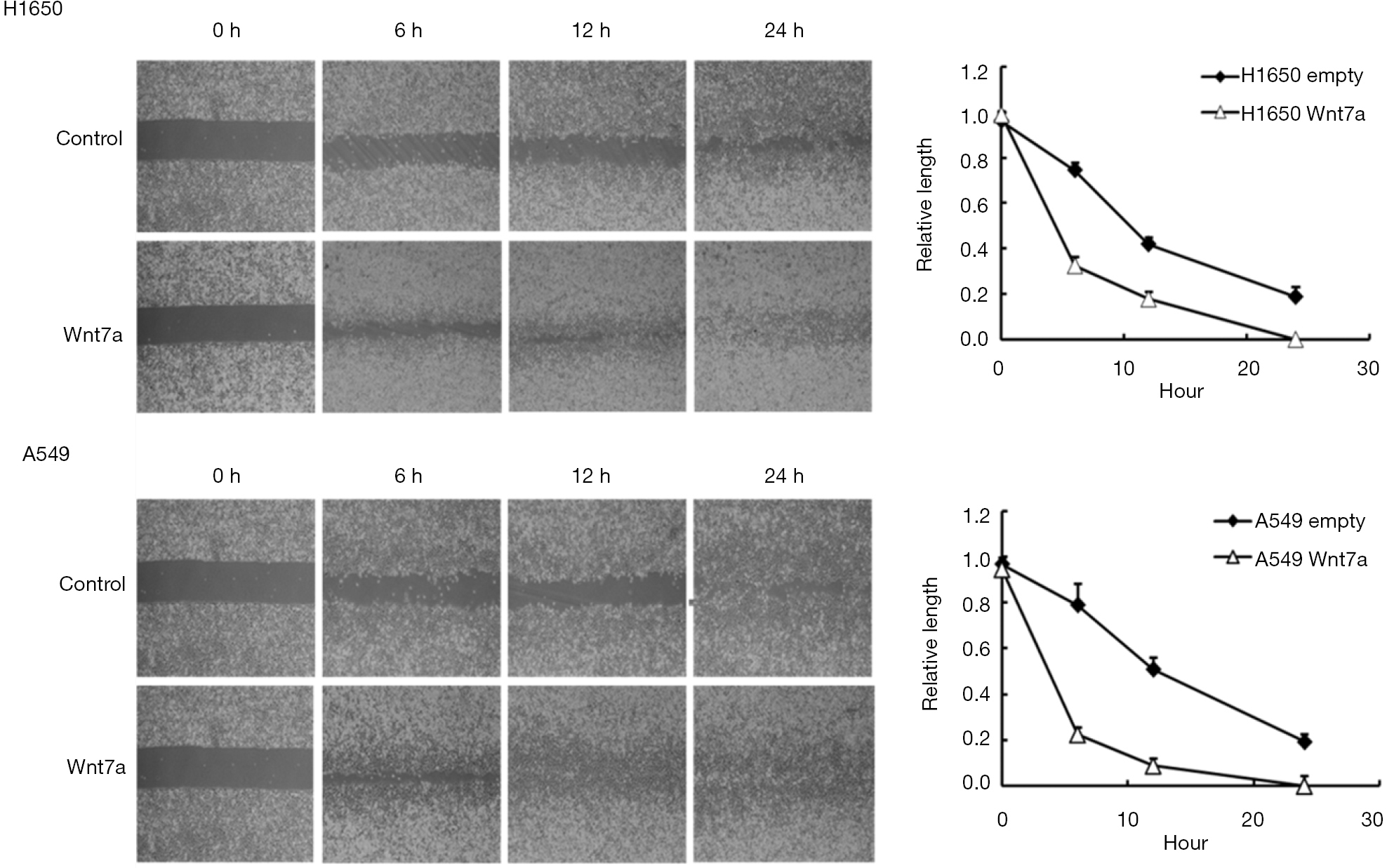 Figure 2 Overexpression of Wnt7a increases migration of H1650 and A549 cell lines. A 500-µm space was seeded in the diameter of plates of H1650 and A549 cells transfected by Wnt7a or empty vector, and migration assay was measured at 6, 12, and 24 h. Images of migration assay were captured using an inverted microscope (×40). Triplicate for each sample was performed and data are represented as mean ± SE. Wnt7a, Wingless-type protein 7a; SE, standard error. 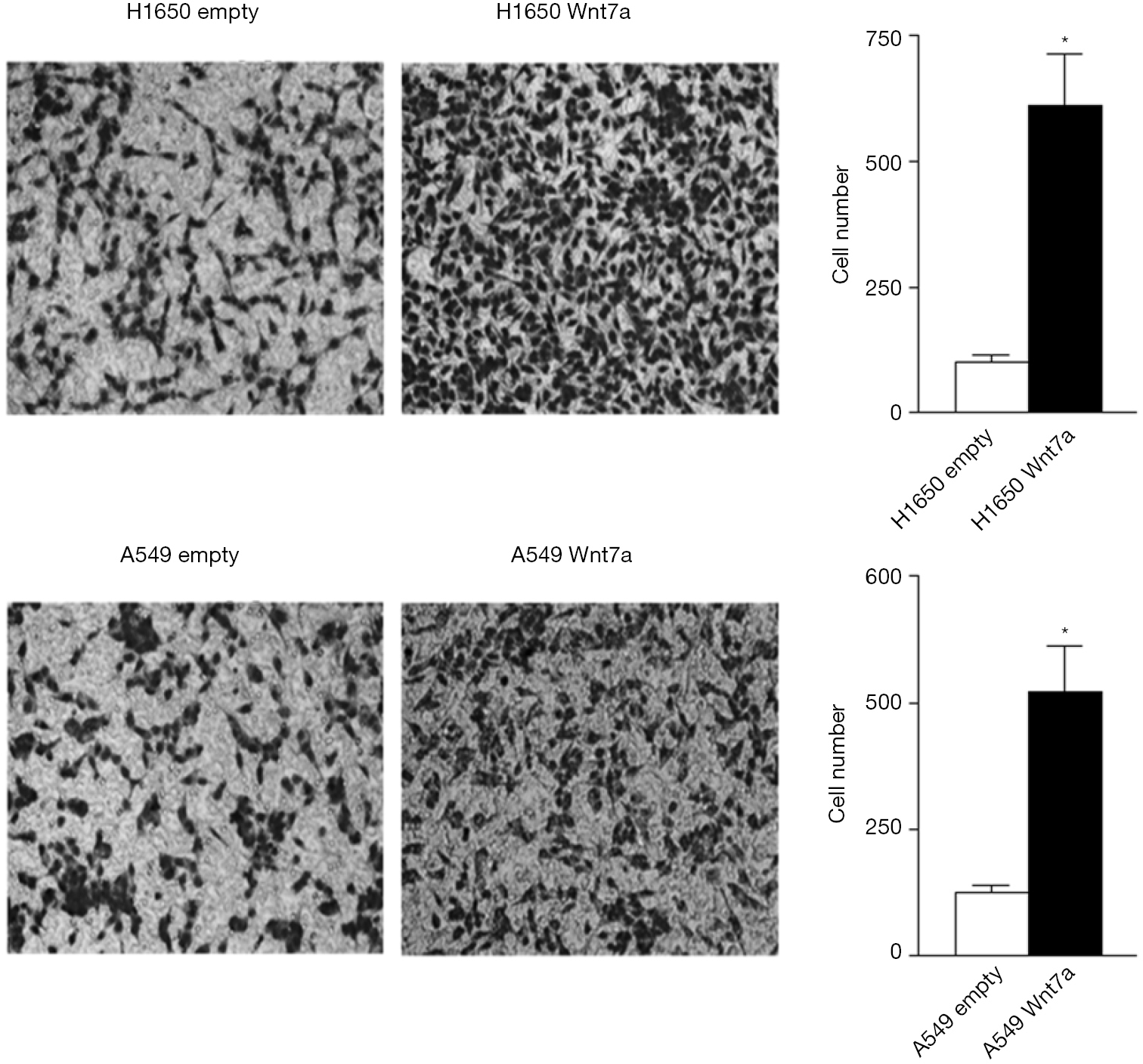 Figure 3 Overexpression of Wnt7a increases invasiveness of H1650 and A549 cell lines. The invaded cells via the Matrigel-coated inserts were visualized under a light microscope (200×). Data are represented as mean ± SE. *, P<0.05, significant difference compared with the empty vector control group. Wnt7a, Wingless-type protein 7a; SE, standard error.

In the non-canonical pathway, the changes in the phosphorylation levels of JNK (Thr-183/Tyr-185) and c-Jun (Ser-63) by re-expression of Wnt7a were significantly increased in both H1650 and A549 cell lines (P<0.05, Figure 4). The amounts of total JNK and c-Jun were not altered by overexpression of Wnt7a. In the canonical pathway, the phosphorylation levels of β-catenin (Thr-41/Ser-45, Ser-552, Ser-675, and Ser-45) were not affected by restoration of Wnt7a expression in both H1650 and A549 cell lines (Figure 5). Also, the amount of total β-catenin did not differ across the groups. Therefore, these results suggests that re-expression of Wnt7a stimulated the JNK pathway in NSCLC but not β-catenin activity. 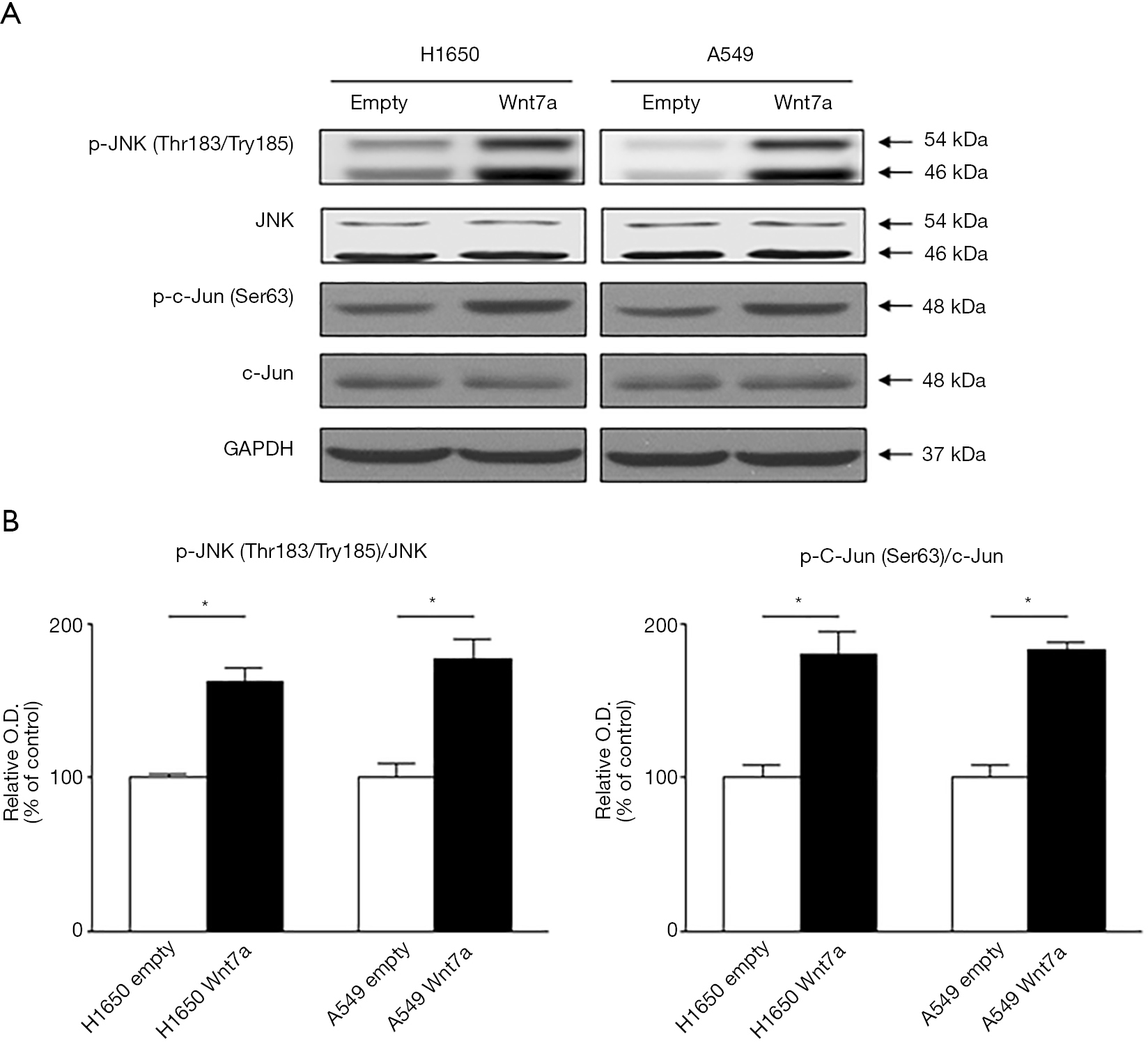 Figure 4 Effect of Wnt7a overexpression on the phosphorylation of JNK and c-Jun in H1650 and A549 cell lines. The expression of JNK, phospho-JNK (p-JNK), c-Jun, and phosphor-c-Jun (p-c-Jun) were determined by western blot analysis. (A) Representative immunoblots by transfection with Wnt7a or empty vector control. (B) Quantification of the immunoblot data were normalized to the ODs of the corresponding total protein levels. Data are presented as mean ± SE. *, P<0.05, significant difference compared with the empty vector control group. Wnt7a, Wingless-type protein 7a; JNK, c-Jun N-terminal kinase; SE, standard error; ODs, optical densities. 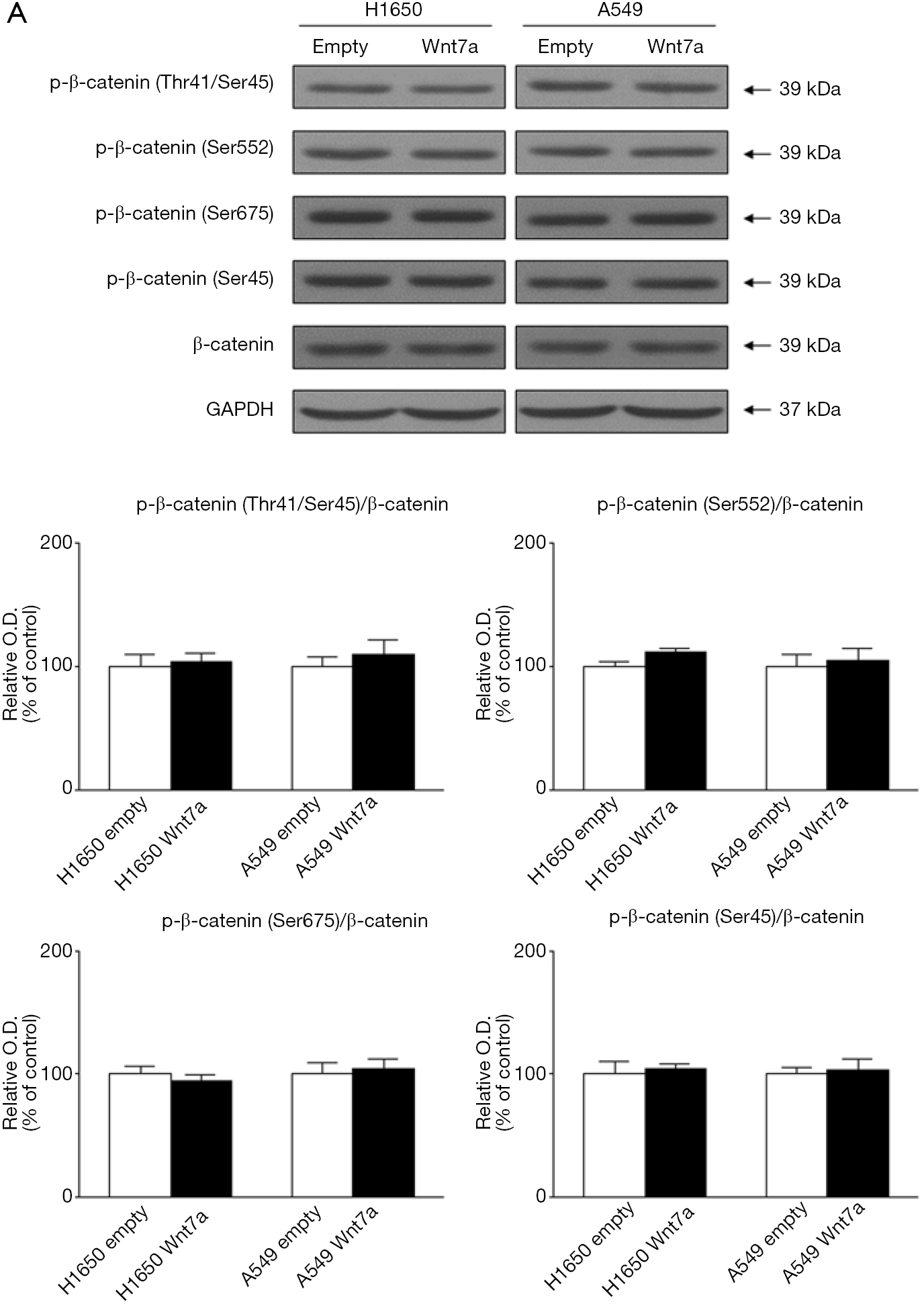 Wnt7a is critical for the development of normal epithelium formation and plays a key role in maintaining an epithelial phenotype in normal lungs (17). To investigate the tumor suppressor properties of the Wnt7a gene in NSCLC, we determined the genetic alteration of the Wnt7a gene in NSCLC cell lines H1650 and A549. We found that restoration of Wnt7a expression in NSCLC cell lines significantly inhibited its proliferation rate. On the contrary, overexpression of Wnt7a led to increased NSCLC cell migration and invasion, suggesting that Wnt7a signaling has different types of cellular functions in lung cancer.

Wnt7a is a known tumor suppressor (10,11) and is downregulated in lung cancer (9). We demonstrated that re-expression of Wnt7a by transfection of Wnt7a-pcDNA6 reduced NSCLC cell proliferation. Thus, these results confirmed a previous study that Wnt7a may have an antiproliferative effect in lung cancer. However, we found that restoration of Wnt7a expression in NSCLC cells positively regulated not only its invasion, but also its migration potential. No previous studies are available on the Wnt7a expression in this pathology. But there is some evidence that Wnt7a promoted breast cancer cell invasion and metastasis (18). It has also been determined that overexpression of Wnt7a could affect ovarian cancer cell growth and invasion (11,19) and increases drug resistance in pancreatic and ovarian cancer cells (19,20). Thus, it is conceivable that Wnt7a with different modes of action may inhibit lung cell proliferation in favour of enhanced mobility and survival, thereby providing a selective advantage for metastatic spread.

JNKs function as components of pro-apoptotic signaling cascades (21), supporting that the JNK pathway is required for cell morphogenesis, development, and differentiation (16). A previous study has been reported that Wnt7a signaling could reduce NSCLC cell proliferation through activation of the JNK pathway (9,22). In the current study, we have identified that phosphorylation of JNK and c-Jun is similar to the activation observed in response to Wnt7a expression via manipulation. However, it is difficult to investigate whether Wnt7a works via the JNK pathway to enhance cancer aggressiveness in lung cancer, thus requiring further clarification.

Wnt7a also induces the canonical pathway through the β-catenin, depending on the cellular context (10,11). Previous studies have been reported that Wnt7a could affect bladder and ovarian cancer cell invasion through Wnt/β-catenin signaling (11,13,19). Moreover, loss of β-catenin expression in NSCLC tumor was associated with increased tumors size (23-25). However, the results shown here support that Wnt7a expression was not dependent on the canonical Wnt-signaling pathway in NSCLC.

In conclusion, the present study shows that Wnt7a signaling affected the NSCLC cell proliferation through corresponding changes in the non-canonical (JNK) pathway but not in the canonical pathway (β-catenin). Additionally, we provide evidence that Wnt7a expression exhibits a double-edged sword by triggering antiproliferative effects while simultaneously enhancing migration and invasion. Further research is clearly needed to determine the multifactorial mechanisms of the Wnt7a pathway in lung cancer.

Reporting Checklist: The authors have completed the MDAR checklist. Available at http://dx.doi.org/10.21037/tcr-20-215

Conflicts of Interest: All authors have completed the ICMJE uniform disclosure form (available at http://dx.doi.org/10.21037/tcr-20-215). The authors have no conflicts of interest to declare.