Despite having a high survival rate (1,2), at least 80% of patients can be cured with current chemoradiotherapy, as many as 15–20% of patients with Hodgkin lymphoma (HL) experience relapse or develop a second tumor, and in advanced patients, less than 5 percent survive without treatment. HL is most common in children and adolescents (3), and boys are 2–3 times more likely to develop this malignancy (4). However, the etiologic and pathogenic mechanisms of HL have not yet been illuminated.

Epstein-Barr virus (EBV), a spherical, 180–200 nm DNA virus, is part of the gamma-herpesviruses subfamily. Structurally, EBV comprises a genome, capsid, and envelope. As a common human virus, a significant proportion of people acquire EBV at some point in their life. With tumorigenic potential (5), EBV is associated with the pathogenesis of nasopharyngeal carcinoma, gastric cancer, Burkitt lymphoma, and HL. Although HL typically originates in B-cells, epithelial cells also play a crucial role in its pathogenesis. After B lymphocytes are infected by EBV, the host does not experience any signs or symptoms directly; rather, the virus enters a stage of latent infection, during which the B cells secrete latency markers including EBV-encoded small RNAs (EBER), latent membrane protein 1 (LMP1), and EB nuclear antigen 2 (EBNA2) (5-7). These markers stimulate an immune response from T cells, but the response is too weak to eliminate the persistent infection of EBV. Epithelial cells are jointly stimulated by interferon gamma (IFN-γ) released by T cells and the external EBV to produce HLA-II receptors and microRNA 200s protein (miR200s). miR200s can trigger B lymphocytes to transform from a state of latent infection to a state of malignant proliferation, resulting in the development of HL (Figure 1) (8). 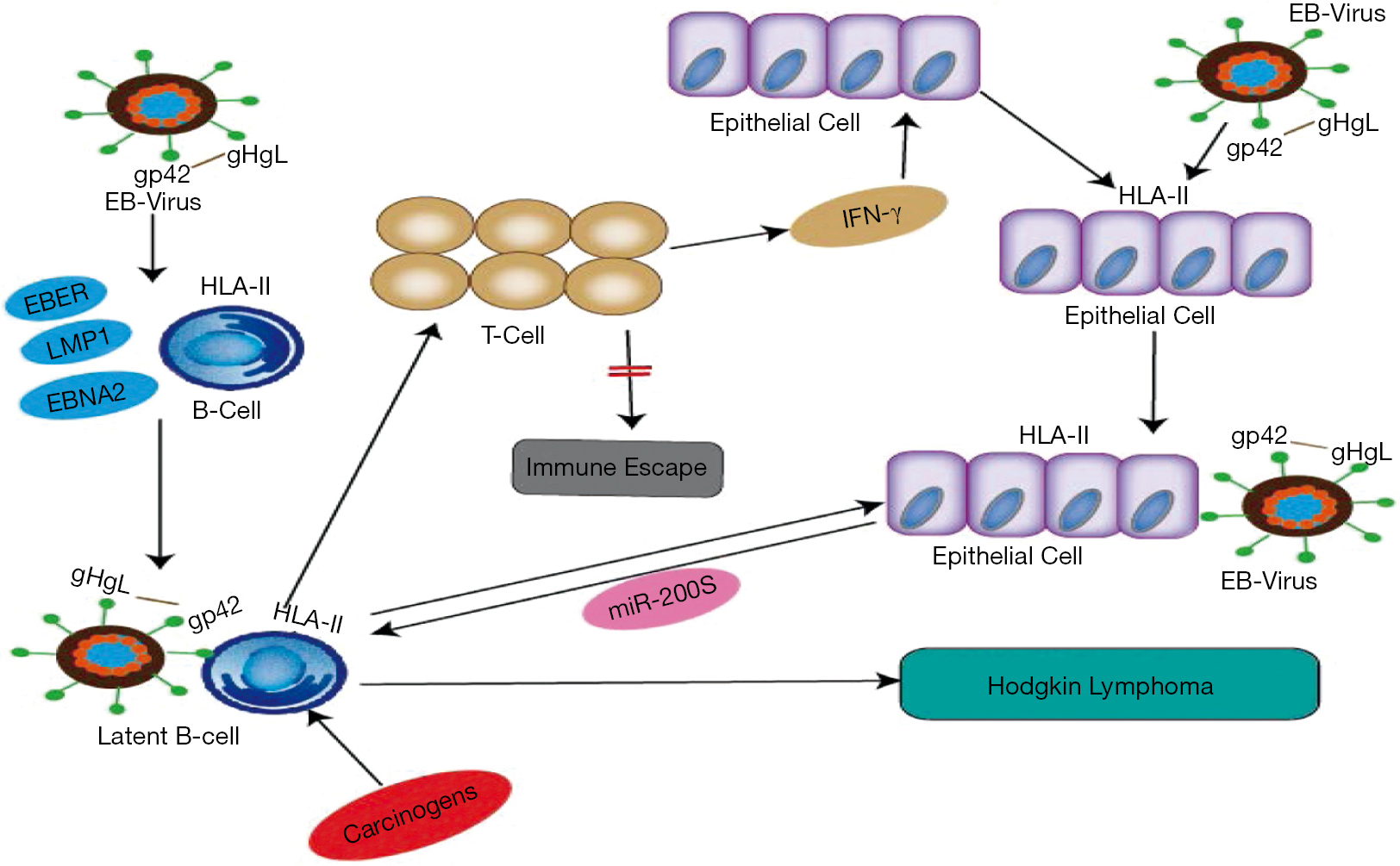 Figure 1 The development of Hodgkin lymphoma after EBV enters into epithelial cells and B lymphocytes.

What is novel in our paper is to explore the binding mechanism between HLA-DPB1 and gp42 protein on the surface of EBV. The gp42 protein on the surface of EBV determines membrane fusion and virus entry (9,10). Gp42 and HLA-II molecules form a complex at a ratio of 1:1 (11). Gp42 also forms a high-affinity complex with gH and gL via the N-terminus (12). The binding of the C-terminus of gp42 to the β-chain of the HLA-II receptor (13) activates EBV infection of B cells and epithelial cells, leading to disease onset. HLA-DPB1 is a functional gene located on the β-chain of HLA-DP (14). In our previous study, sequence-based typing (SBT) was used to detect HLA-DPB1 genotypes in 100 HL patients and 100 healthy adults. Four HL-related genotypes were identified: HLA-DPB1*04:01:01, 04:02:01, 09:01:01, and 14:01:01. Among them, HLA-DPB1*04:01:01 had the highest expression level. In our current study, we further explored the pathogenic mechanisms of HL by studying the binding pattern between HLA-DPB1 and gp42.

The HLA-DPB1*04:01:01 genotype obtained by sequencing was further identified using BLAST in the UniProt (https://www.uniprot.org), which yielded that it was 98.4% P04440. The crystal structures of two proteins, P04440 (PDB:3LQZ) and gp42 (PDB:3FD4), were downloaded from the Protein Data Bank (PDB, http://www.rcsb.org). Molecular dynamics simulations of these two proteins (3LQZ and 3FD4) were performed using the Discovery Studio 16.1 software as follows: (I) docking simulations of these two molecules were performed using Z-DOCK (Dock Proteins); (II) the optimal docking model was screened out using R-DOCK (Refine Docked Proteins); and (III) analysis of protein interface was performed for the optimal docking molecular model.

First, 10 mL of fetal bovine serum (FBS) (Excell Bio, China) was added into 90 mL of IMDM medium (GIBCO, USA). Then, 1 mL of penicillin/streptomycin (GIBCO, USA) was added, and the thawed T1 cells (174 x CEM.T1, ATCC CRL-1991, USA) or 293T cells (GIBCO, USA) were put into 15-mL centrifuge tubes, respectively. After centrifugation, the supernatant was discarded, and the cells were inoculated into culture flasks (Corning Company, China) and cultured in a 5% CO2 incubator (Heal Force, Shanghai) at 37 °C with saturated humidity. The cells were passaged upon reaching 90% confluence (25 cm2).

The chemically synthesized pEGFP-N2-HLA-DPB1 (General Biosystems) bacterial solution was plated on nutrient agar. First, the grown monoclonals were digested (EcoRI and BamHI), and then the positive clones were chosen for sequencing and alignment. To confirm whether the recombinant vector had been successfully constructed, polymerase chain reaction (PCR) was performed on the recombinant plasmids. These plasmids were divided into the blank control group, the empty vector group, and the HLA-DPB1 recombinant vector group.

After the successful construction of the plasmids, flow cytometry (BD, USA) was performed to detect the proportion of EGFP-positive cells, the HLA-DPB1 gene expression level was determined by qRT-PCR (Applied Biosystems, USA), and Western blotting (Bio-Rad, USA) was used to measure the level of HLA-DPB1 protein expression.

Detection of the HLA-DPB1*gp42 binding rate

The gp42/gHgL complex protein was labeled with 6X His antibody (QIAGEN, China), after which the protein fluoresced red. Under the optimal transfection conditions, the numbers of both green- and red-fluoresced T1 cells and 293T cells under the electron microscope were counted to obtain the proportion of HLA-DPB1+ gp42+ cells; the HLA-DPB1*gp42 binding rate was calculated accordingly.

All data were expressed as mean ± standard deviation (). Statistical analysis was performed in SPSS 19.0 software package. Normally distributed data were analyzed with one-way ANOVA, with Fisher’s least significant difference (LSD) method used for unequal variances and Tamhane test used for multiple comparisons with unequal variances. A P value of 0.05 was considered to be statistically significant. The non-normal set of data was normalized by logarithm transformation, followed by one-way ANOVA.

Molecular dynamics simulation using Discovery Studio 16.1 software showed that gp42 protein bound to the β-chain of HLA-DPB1 via its α-chain (Figure 2A,B) to form a complex (Figure 2C). Figure 2D shows the 3D structure of the complex. As shown in Figure 3, the gp42*HLA-DPB1 complex was a hydrophilic protein containing a total of 338 amino acids and 5,370 atoms, with a molecular weight of 39,144.12. An Instability index of 47.72 showed that the complex was unstable. Furthermore, 7 amino acids in the α-chain were bonded with 7 amino acids in the β-chain via 9 hydrogen bonds. Table 1 shows the specific amino acid names and hydrogen bond distances. 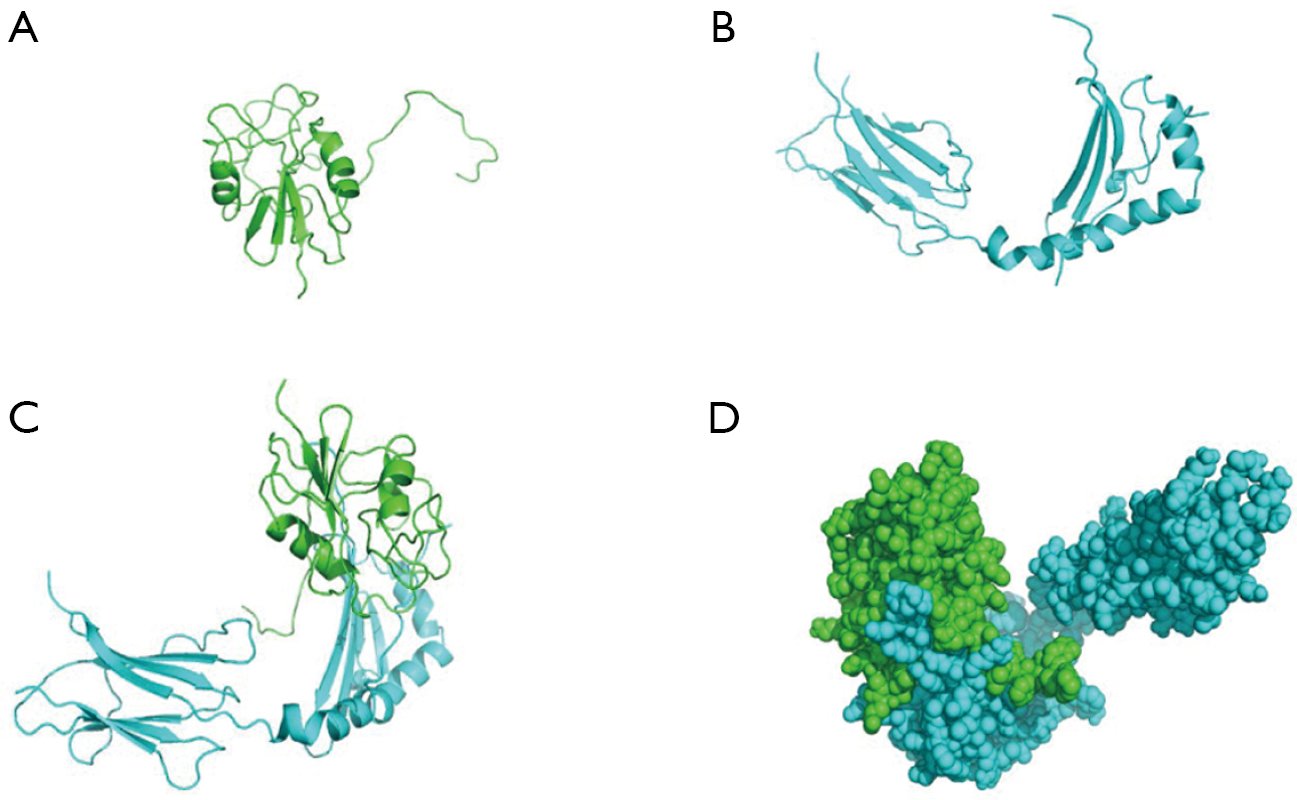 Figure 3 Properties of the HLA-DPB1*gp42 complex. 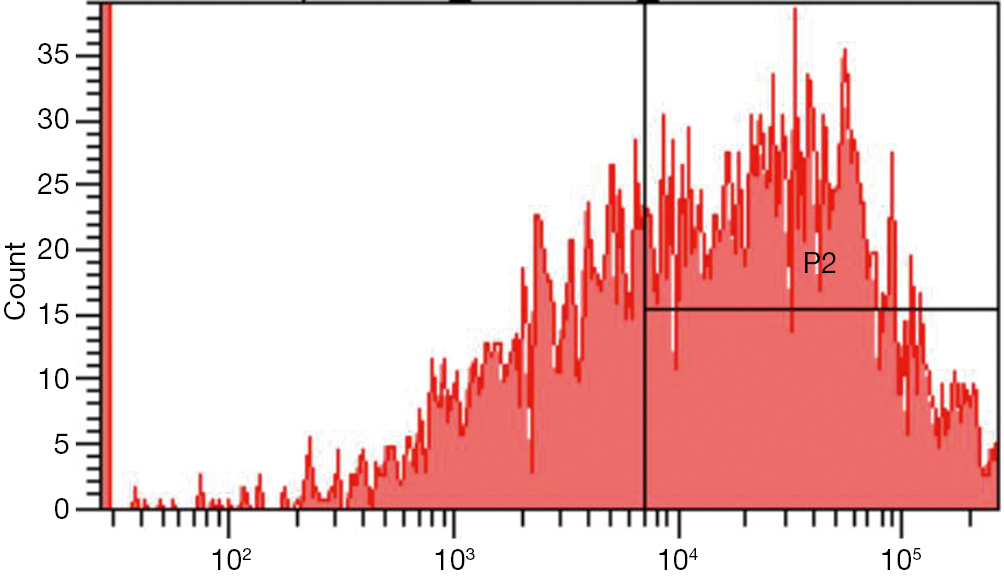 The optimal binding efficiency of HLA-DPB1 and gp42 protein 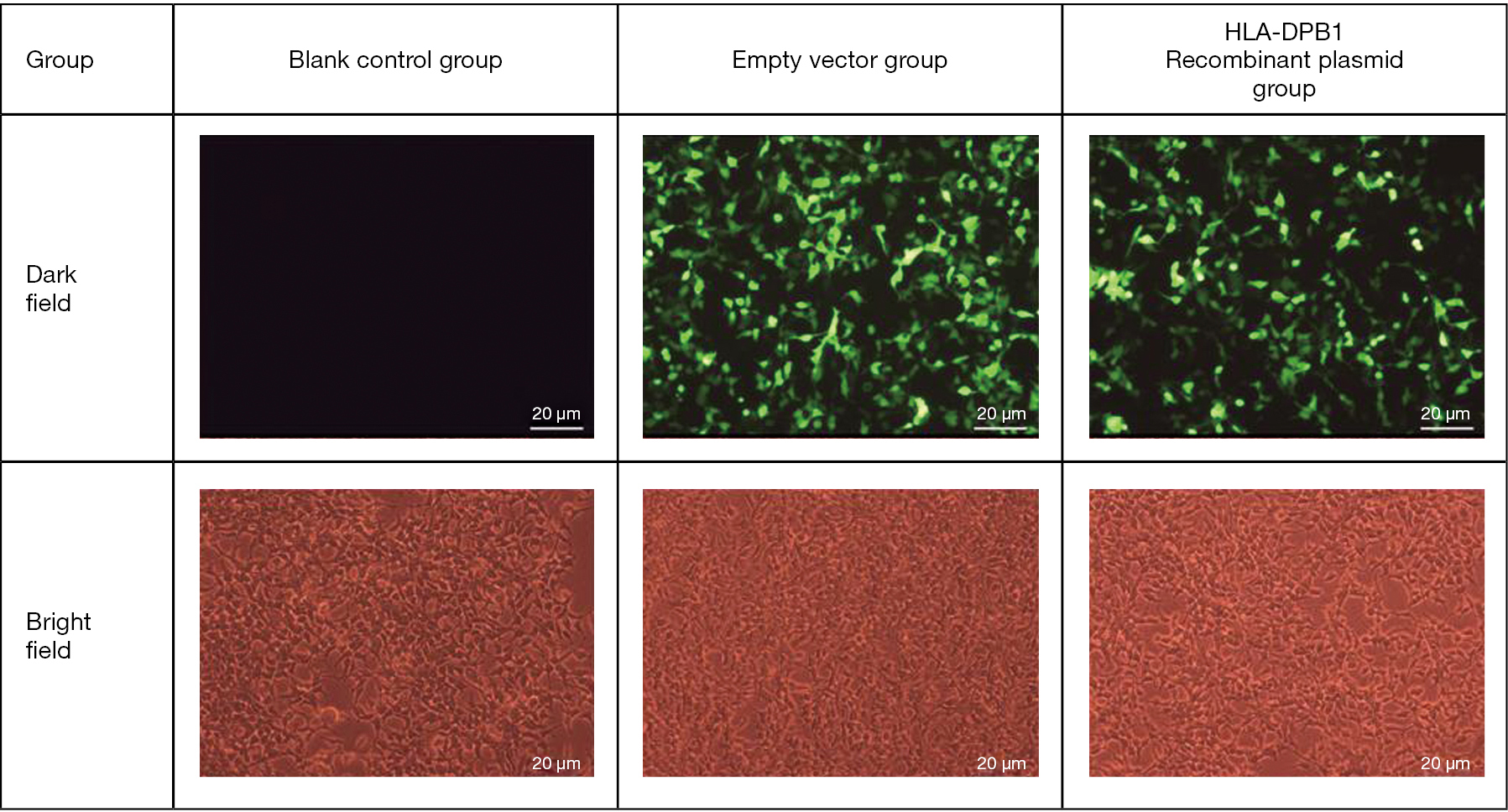 Compared with the pathogenesis of the influenza virus and HIV, the process of EBV infection of host cells is more complicated. During EBV infection, the membrane fusion and entry of the virus into cells are divided into multiple steps by the glycoproteins on its surface (21). Six EBV glycoproteins are typically found on the viral surface: gp350, gp220, gH, gL, gp42, and gB. Although the combinations of gp350 and gp220 with CR2 (CD21) can improve the efficiency of virus entry into host cells, they are not necessary for cell entry (22). The main function of gB, the most conserved glycoprotein, is to promote the maturity of EBV, and it is necessary for cell entry (23); however, it has been proposed that gB promotes virus-cell membrane fusion only under the regulation of gH/gL (24). The gp42 protein plays a central role in membrane fusion. As a directional switch (25), it can promote the fusion of EBV with B cells but inhibit the fusion of EBV with epithelial cells under the regulation of gH/gL proteins (23,26). However, the infected epithelial cells may be induced to express more HLA-II receptors and contain more gp42 (12). Importantly, the EBV-infected epithelial cells secrete some proteins (e.g., miR200s) that can stimulate the transformation of memory B lymphocytes from latent infection to proliferation, which is a basic step in the pathogenesis of HL (16).

The main function of HLA-II receptors is to present antigen (27). These receptors are predominantly expressed in conventional antigen-presenting cells including B cells, T cells, macrophages, and dendritic cells. Epithelial and endothelial cells can also be stimulated to express HLA-II receptors. The three different HLA-II molecules are HLA-DP, -DQ, and -DR (28). Each of these genotypes plays a critical role in EBV infection (29). In 2000, Haan et al. found the transient expression of HLA-DQ rendered EBV entry, and further research showed that only the HLA-DQβ*02 locus could regulate EBV entry (30). In 2002, Mullen et al. showed that the gp42 protein of EBV interacted with HLA-DR1 at a resolution of 2.65 Å (13). Li et al. found that EBV infection of B cells could be impaired by blocking the interaction between gp42 and HLA-II molecules or blocking the conversion of gp42 into sgp42 (29). There is a hypothesis that the conformation of gp42 changes slightly after HLA-II molecules bind to gp42, which rearranges the relevant glycoproteins in the viral envelope and alters the infection process, suggesting that gp42 plays a key role during EBV infection (31).

Our current research confirmed that the β-chain of HLA-DPB1 binds to the α-chain of gp42 to form a complex, the secondary structure of which is stabilized by hydrogen bonds. Figure 2D and Table 1 present the 3D structure diagram of the binding pattern and the contact areas between these two chains, respectively. In addition, the transfection efficiency of HLA-DPB1 in T1 cells (B lymphocytes) and 293T cells (epithelial cells) was measured using laboratory technology and the binding rate of 293T plasmid vector to gp42 was calculated.

Unfortunately, due to the low proportion of EGFP-expressing T1 cells during the construction of the HLA-DPB1 vectors, the binding rate of T1 cells to gp42 was not further detected. Limited by our experimental conditions, we were unable to obtain B lymphocytes that neither expressed HLA-DPB1 nor carried EBV genes. Consequently, our subsequent experiment only revealed that the binding efficiency of HLA-DPB1 to gp42 in 293T cells was 26–31.3%. In conclusion, the results of molecular dynamics simulation and laboratory tests in this study may help to improve our understanding of the pathogenic mechanism of HL caused by EBV infection of epithelial cells and B lymphocytes. Furthermore, tumorigenesis may be prevented by breaking hydrogen bonds, preventing hydrophilic binding, suppressing EBV activation, and lowering the concentration of gp42, and these strategies may also pave the way for effective therapies for treating HL.

Conflicts of Interest: All authors have completed the ICMJE uniform disclosure form (available at http://dx.doi.org/10.21037/tcr-20-2070). The authors have no conflicts of interest to declare.