Tumor immunotherapy has been a popular area of research in the field of tumor therapy in recent years, especially the application of immune checkpoint inhibitors (ICIs), which has brought tumor immunotherapy into a new era. Unlike conventional treatment methods, such as chemotherapy, radiation, and targeted therapy, which directly affect tumor cells, ICIs stimulate tumor-specific T-cell functions by blocking immune checkpoint pathways in the tumor microenvironment, thereby improving endogenous antitumor immunity to achieve antitumor effect.

In recent years, ICIs, represented by PD-1/PD-L1 inhibitors, have made remarkable achievements in the field of tumor treatment. Because of to their wide antitumor applicability and long-lasting effects, it has become the most promising tumor immunotherapy strategy. PD-1/PD-L1 has become the standard treatment for multiple malignancies, including malignant melanoma, non-small cell lung cancer (NSCLC), Hodgkin lymphoma, squamous cell carcinoma of the head and neck, renal cell carcinoma, and so on. Although PD-1/PD-L1 monoclonal antibodies have achieved promising results in clinical antitumor applications, not all patients benefit from this method. The overall objective response rate (ORR) of patients receiving monotherapy with ICIs is 20% to 40% (1). Some patients (9–29%) experienced hyperprogressive disease after receiving anti-PD-1 antibody, that is, the patient’s tumor volume increased by 50% within 2 months after receiving anti-PD-1/PD-L1 antibody monotherapy, and the tumor growth rate was more than twice before treatment (2,3). In addition, the adverse reactions of PD-1/PD-L1 monoclonal antibodies cannot be ignored, and some of which are fatal, such as immune-related pneumonia and hepatitis (4). The unpredictable efficacy and high cost of treatment have prevented the widespread use of PD-1/PD-L1 inhibitor therapy. Therefore, finding effective and accurate biomarkers to predict the efficacy of ICIs and selecting potential clinical benefit populations are important areas of clinical research.

PD-L1 expression is the earliest clinical biomarker thought to predict PD-1/PD-L1 inhibitors (5). In many tumors, such as melanoma, NSCLC, renal cell carcinoma, and ovarian cancer, PD-L1 overexpression has been observed to have a significant correlation with the efficacy of PD-1/PD-L1 inhibitors (6-8). However, no correlation between nivolumab’s therapeutic effect and PD-L1 expression status has been found in lung squamous cell carcinoma (9). The same is true for renal cell carcinoma, which has median overall survival (OS) of 21.8 and 27.4 months for patients with PD-L1-positive expression ≥1% and <1%, respectively (10). This indicates that PD-L1 expression is still inaccurate as a biomarker for predicting efficacy, and the reasons include the following: (I) PD-L1 expression is heterogeneous and dynamic. There are differences in PD-L1 expression for different tumor sites, different stages of the disease, and different treatments. (II) Since PD-L1 can be expressed in tumor cells and immune cells at the same time, PD-L1 expressed by immune cells should also be included in the detection of PD-L1 by immunohistochemistry. (III) Different detection platforms, antibodies, and set positive thresholds affect the test results, leading to a significant reduction in the clinical significance of PD-L1 testing and may lead to inappropriate treatments (11). In addition, several other biomarkers have been reported, such as tumor mutation burden (12), CD8+ tumor-infiltrating lymphocytes (TILs) in the tumor microenvironment (13), microsatellite instability-high or deficient mismatch repair (14), and specific inflammation and interferon-γ-related mRNA-based signatures (15), and so on, but research on these biomarkers remains in the experimental phase. Therefore, due to the inaccuracy of PD-L1 as a predictor and other indicators are still in the research stage, there is an urgent need to develop reliable, novel, and inexpensive markers to identify specific patients most likely to benefit from PD-1 inhibitors.

Previous studies have reported that peripheral blood cells, including neutrophils, lymphocytes, platelets, and monocytes, can promote tumor proliferation, invasion, and metastasis (16,17). Based on this evidence, many inflammatory indicators such as the neutrophil-to-lymphocyte ratio (NLR), platelet-to-lymphocyte ratio (PLR), and lymphocyte-to-monocyte ratio (LMR) have been used as indicators of prognosis for various tumors (18-22). At present, there have been some reports on the relationship between NLR in patients with PD-1 inhibitors and the prognosis of lung cancer, kidney cancer, and melanoma (23-25), but the LMR has been less studied in patients treated with PD-1 inhibitors. This retrospective study investigated the role of the LMR as a predictor of response to PD-1 inhibitor in patients with advanced cancer. We present the following article in accordance with the STROBE reporting checklist (available at http://dx.doi.org/10.21037/tcr-20-1451).

The data collected included the age, sex, metastatic site of each patient; the treatment before PD-1 inhibitor application; the type of PD-1 inhibitor; ECOG performance status; smoking and drinking history; serum lactate dehydrogenase; the LMR in peripheral blood within 1 week before starting anti-PD-1 antibody treatment and 6±2 weeks after treatment initiation. The study was conducted in accordance with the Declaration of Helsinki (as revised in 2013). The study was approved by ethics board of Affiliated Cancer Hospital of Zhengzhou University and Henan Cancer Hospital (No. ChiCTR1900024385), and informed consent was taken from all the patients.

The LMR was defined as the ratio of lymphocytes to monocytes in peripheral blood, and LMR-week 6 was the LMR 6±2 weeks after the first application of anti-PD-1 antibody. The objective response (CR or PR) was used as the state variable, and the LMR was used as the test variable to construct the receiver operating characteristic (ROC) curve. The area under the curve (AUC) indicates the ability to predict tumor shrinkage. The maximum value of the Youden index was selected as the cutoff value of the LMR; then, the patients were divided into high- and low-LMR groups. Demographic characteristics are expressed as percentages for categorical variables and as medians and ranges for quantitative variables. The Kaplan-Meier method was used for survival analysis, and the log-rank test was used to compare the differences between the two groups. Cox proportional hazards model was used for univariate analysis, and factors with significant differences were included in multivariate analysis. SPSS version 21.0 (IBM Corp., Armonk, NY, USA) was used for the above statistical analysis. All statistical tests were two-sided, and significance was set at P≤0.05.

This retrospective analysis included 121 patients receiving anti-PD-1 treatment, with an ORR of 19.0% (21/121 patients). The basic patients’ characteristics are shown in Table 1. Of the 121 patients, 40 had melanoma, 25 had renal cell carcinoma, 36 had liver cancer, and 20 had NSCLC. 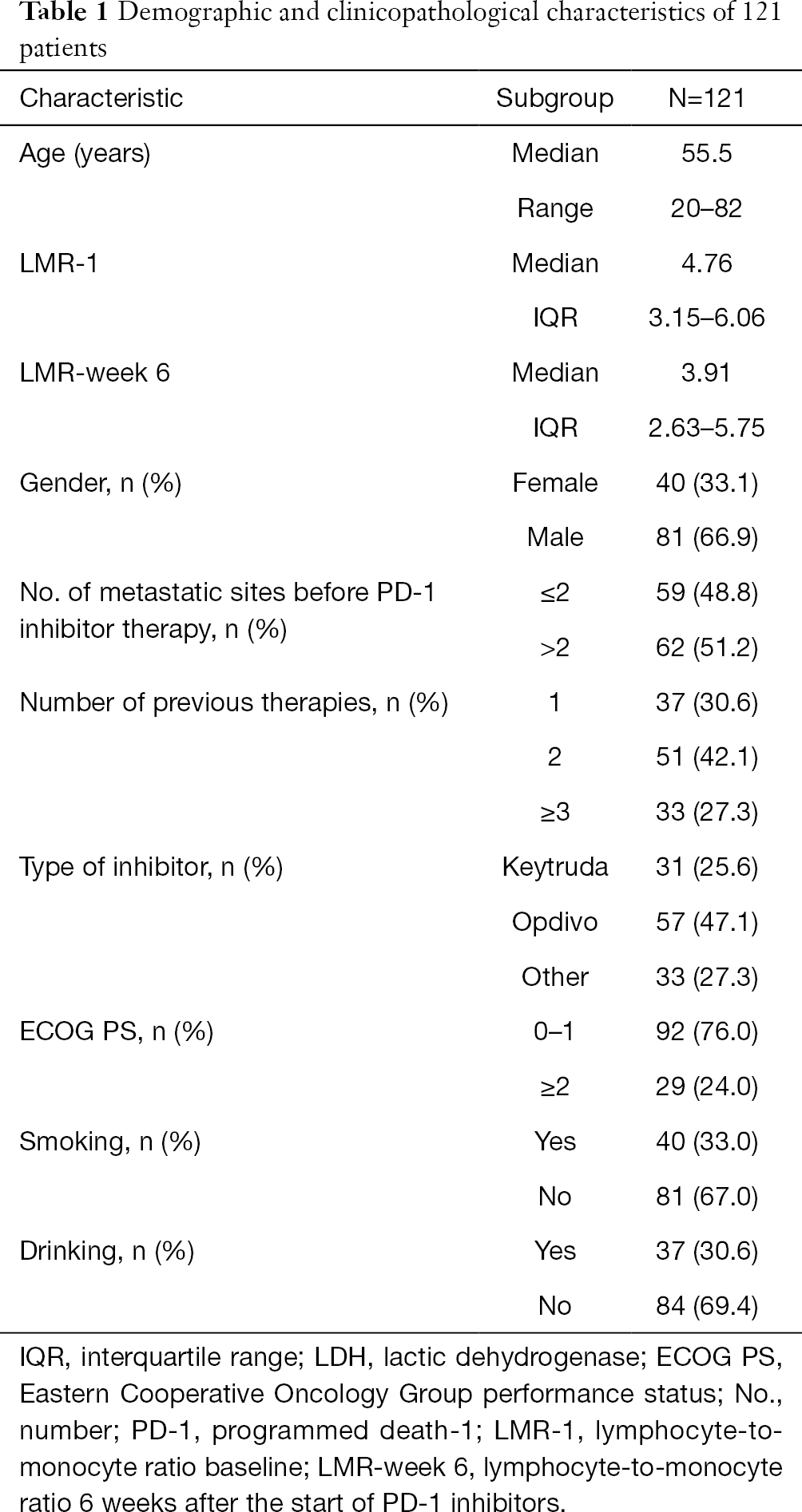 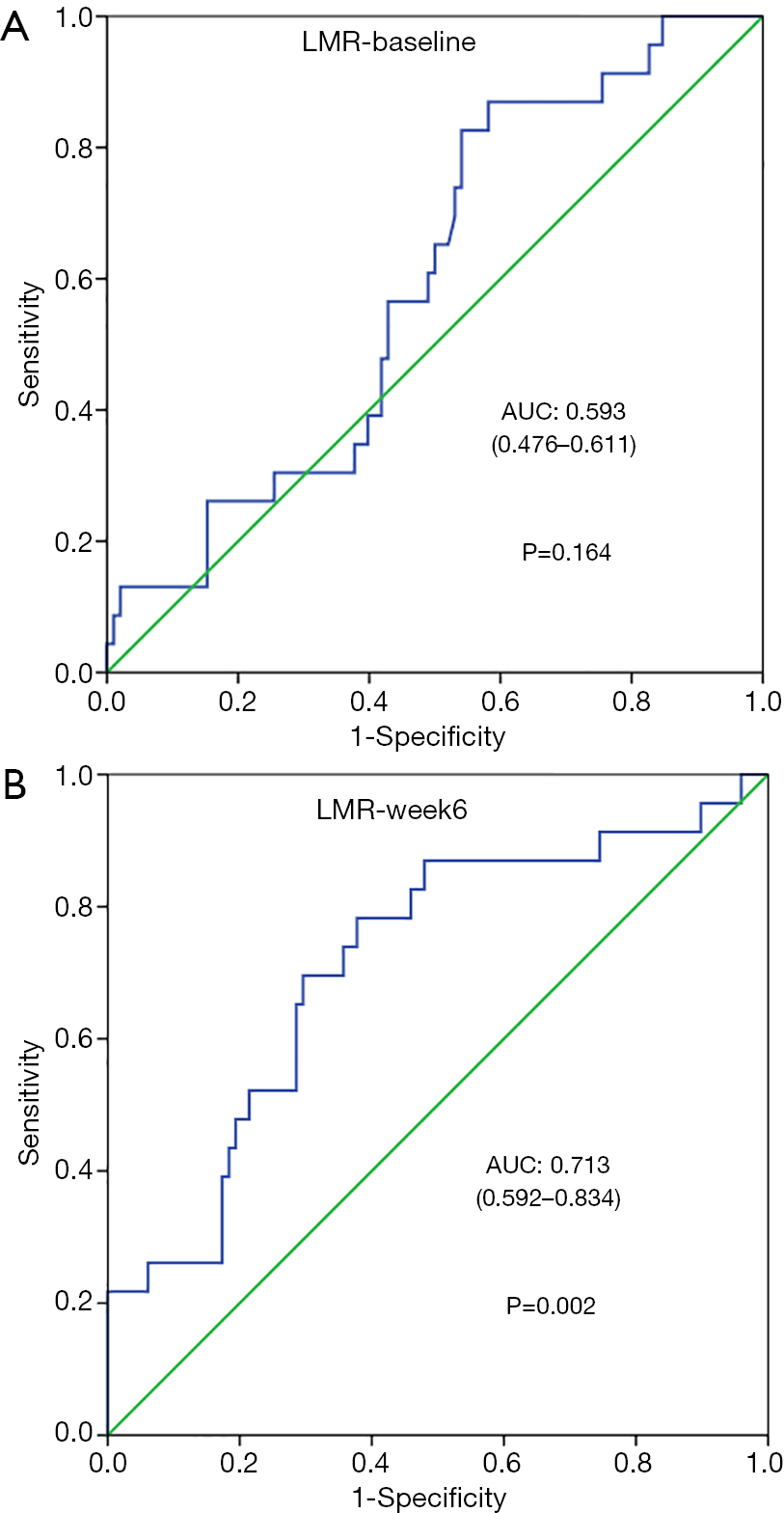 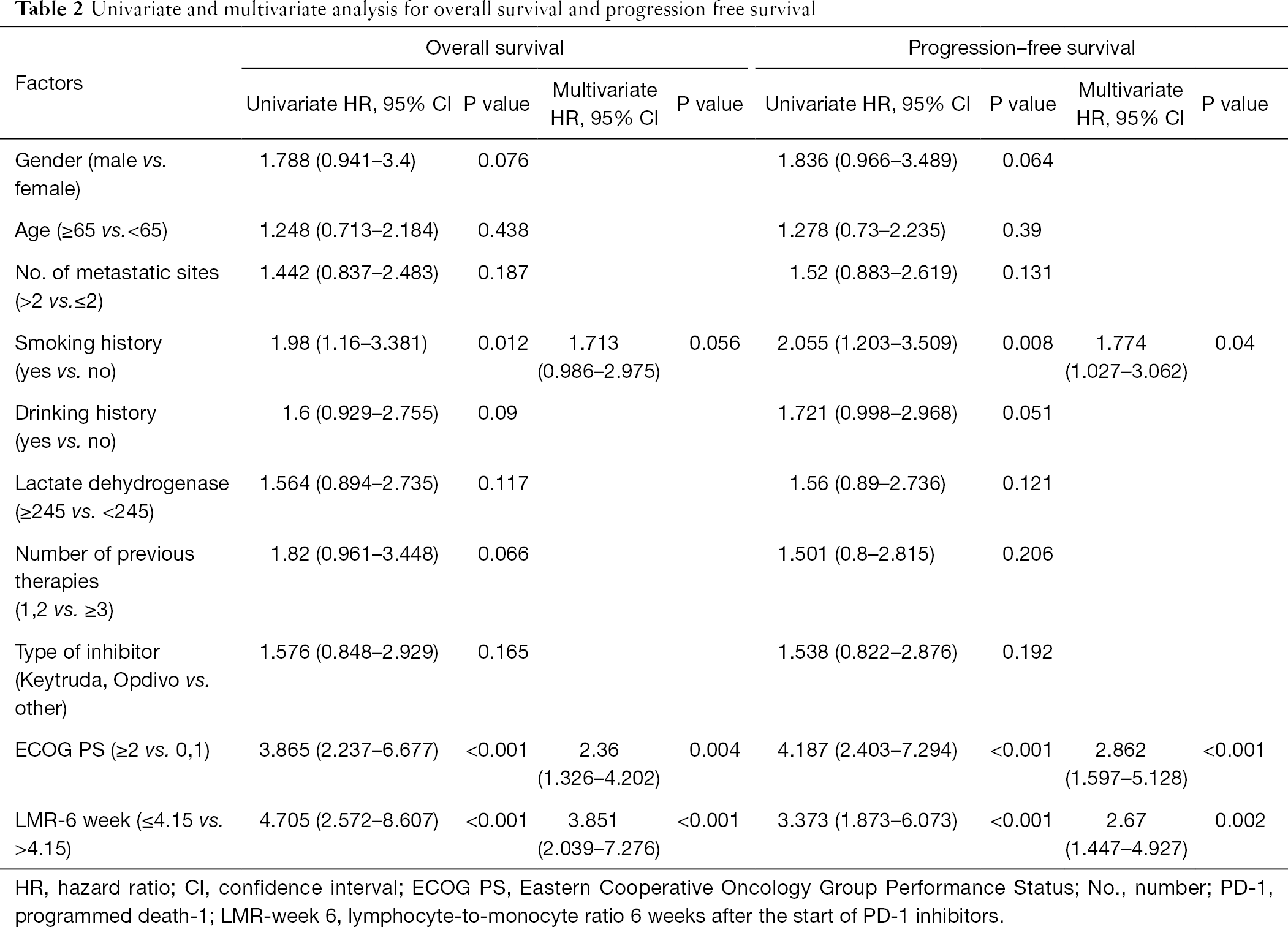 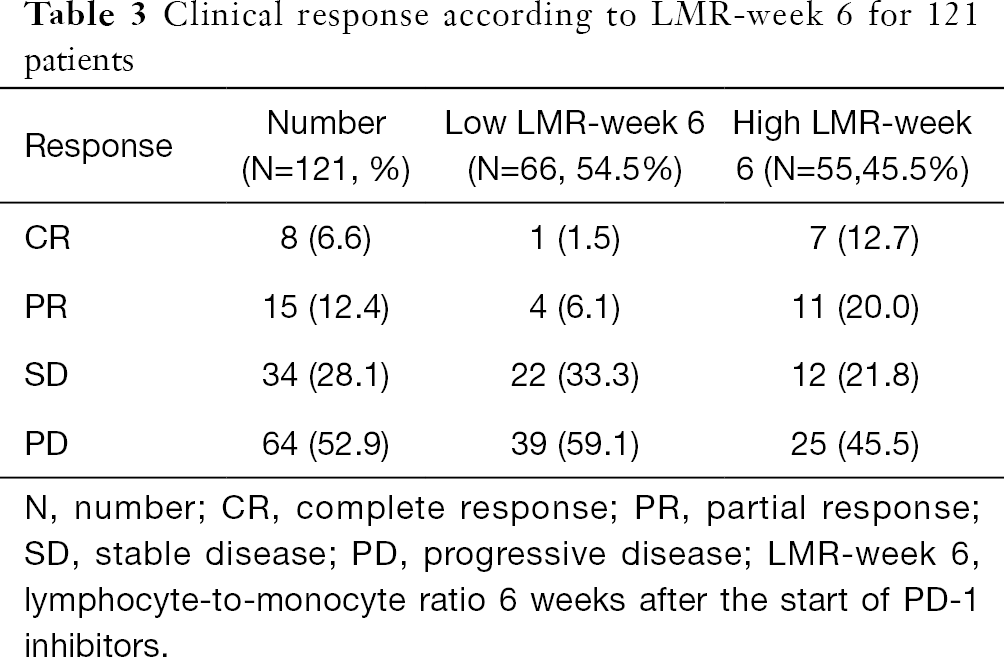 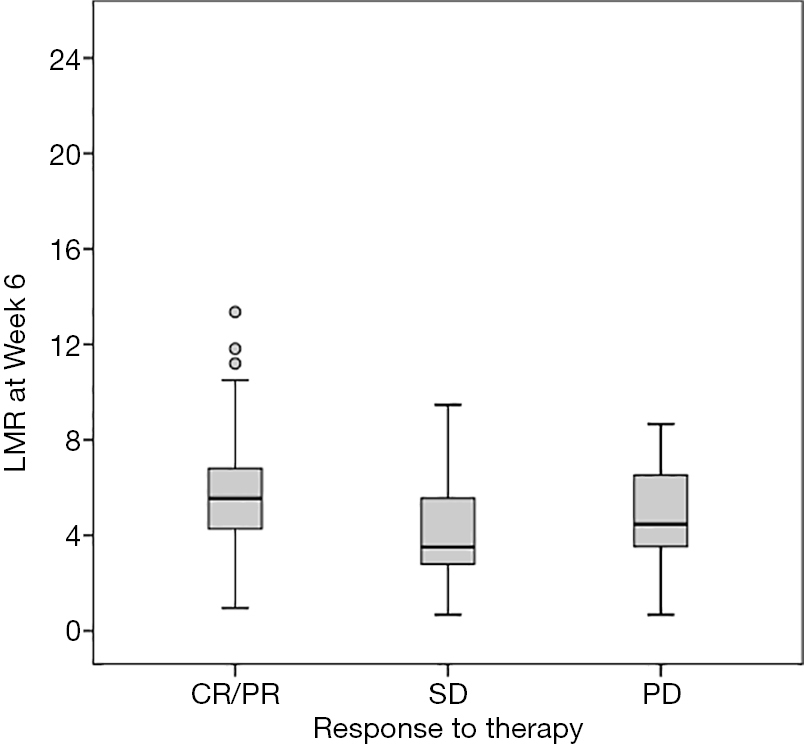 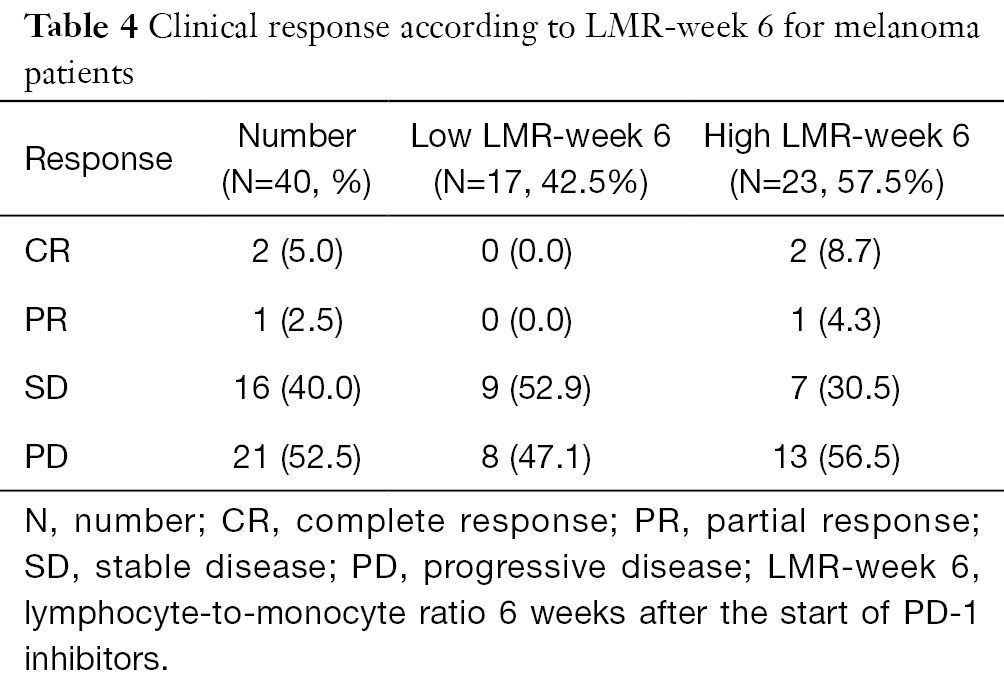 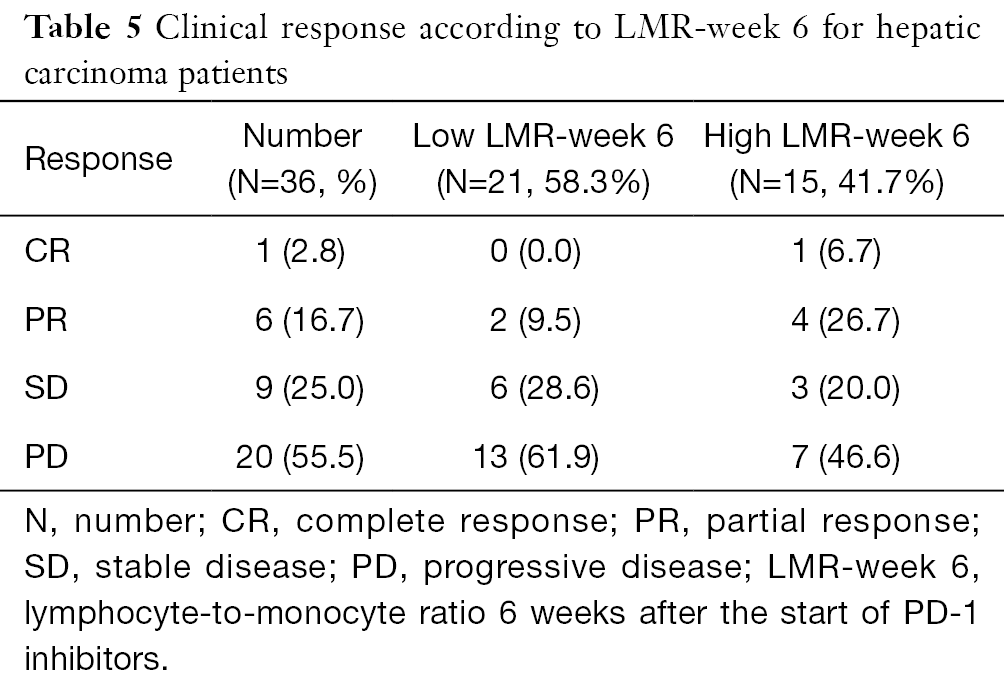 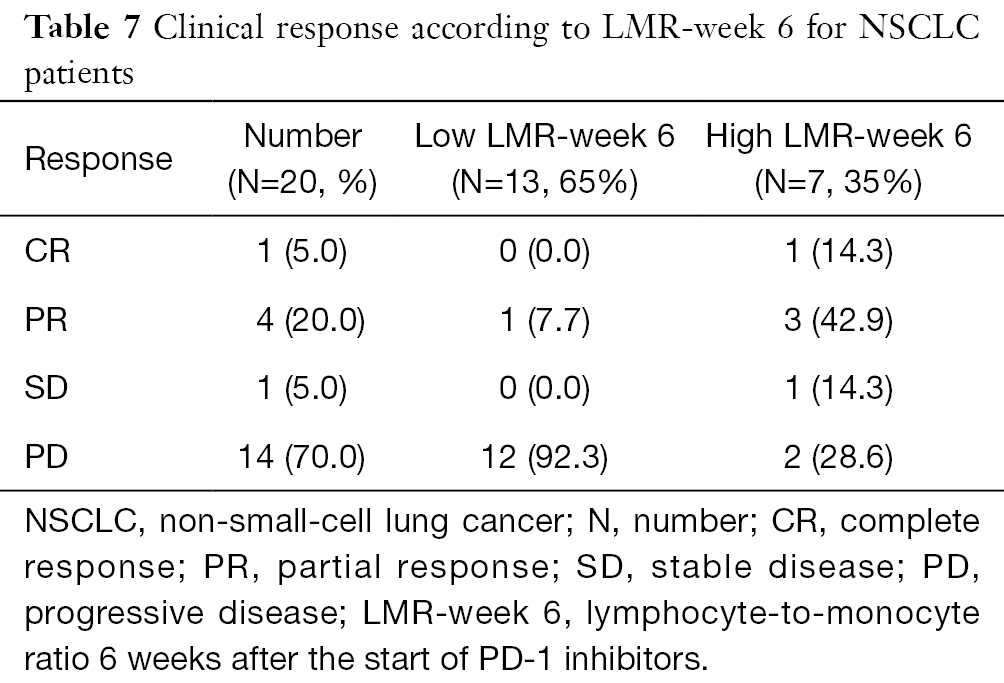 The inflammatory response plays a key role in different stages of tumor progression, including initiation, proliferation, invasion, metastasis, and angiogenesis (26,27). Lymphocytes, as a major component of the immune system, can inhibit tumor proliferation and metastasis through cytotoxicity, thereby participating in tumor surveillance and defense (28). Monocytes are also the body’s main immune cells. They change the tumor microenvironment through local immunosuppression and their effect on angiogenesis, thereby promoting the progression of cancer (29). Studies have confirmed that a high monocyte count is one of the factors with poor prognosis in patients with malignant tumors (30,31).

In addition, a series of studies have shown that a low LMR is associated with poor prognosis in many cancers. However, the mechanism by which LMR affects the prognosis of tumor patients has not been clarified. TILs and tumor-associated macrophages (TAMs) have been found in a variety of malignant tumor tissues and can play a precise role in predicting prognosis (32). TILs control the progression of tumors by participating in the body’s cellular and humoral immunity. Low lymphocytes counts reduce the body’s inhibitory effect on tumor cells, leading to poor prognosis. TAMs are monocytes originating in circulating blood and are active around tumor tissues for tumor chemokine secretion. At the same time, TAMs can promote tumor angiogenesis and produce anti-immune responses by producing growth factors and cytokines to accelerate tumor progression. Studies have confirmed that patients with high TAM infiltration have poor prognosis (33). The absolute value of peripheral blood mononuclear cells is a biological marker that can replace TAMs. Therefore, LMR can be used as a biomarker of comprehensive lymphocytes and monocytes to evaluate the prognosis of patients with malignant tumors. As an indicator of inflammatory response, LMR has the characteristics of simple, fast, operable, specific and sensitive detection methods and may be considered as an early alternative indicator for predicting the outcome of patients receiving anti-PD-1 agents. At present, some studies have reported the relationship between the NLR and prognosis of lung cancer, kidney cancer, and melanoma in patients with PD-1 inhibitors (23-25). The relationship between the LMR and the prognosis of patients treated with anti-PD-1 agents is less well studied.

There are some limitations to our study. First, the study included various types of cancer, and the number of patients with each type of cancer was limited. Second, this was a retrospective study, so there may have been a risk of bias and confounding factors. In addition, the follow-up time was short, and there were not enough death data in the high-LMR group; thus, the median survival time could not be calculated. Therefore, prospective, randomized, multicenter clinical trials with larger sample sizes are needed in future studies to provide more reliable data.

The higher LMR at the sixth week after the initiation of PD-1 inhibitors is significantly related to the therapeutic effect. Therefore, LMR-week 6 can be used as an early substitute indicator for stratification in patients with a better response to anti-PD-1 agents, which will help clinicians determine individualized treatment planning as well as avoid adverse reactions and increase response rates.

Funding: This work was supported by Henan Medical Science and Technique Foundation (grant No. 201701030) and Henan Provincial Scientific and Technological Project (grant No. 162300410095).

Reporting Checklist: The authors have completed the STROBE reporting checklist. Available at http://dx.doi.org/10.21037/tcr-20-1451

Conflicts of Interest: All authors have completed the ICMJE uniform disclosure form (available at http://dx.doi.org/10.21037/tcr-20-1451). The authors have no conflicts of interest to declare.

Ethical Statement: The authors are accountable for all aspects of the work in ensuring that questions related to the accuracy or integrity of any part of the work are appropriately investigated and resolved. The study was conducted in accordance with the Declaration of Helsinki (as revised in 2013). The study was approved by ethics board of Affiliated Cancer Hospital of Zhengzhou University and Henan Cancer Hospital (No. ChiCTR1900024385), and informed consent was taken from all the patients.