Hodgkin lymphoma (HL), a malignant tumor of the lymph nodes or extranodal lymphoid tissue, comprises two main subtypes: classical HL (cHL) and nodular lymphocyte predominant Hodgkin lymphoma (NLPHL). Advanced NLPHL is prone to turn into aggressive lymphoma, which is difficult to treat and has a poor prognosis (1) Owing to the low prevalence of NLPHL (about 0.1–0.2/100,000) (2), its etiology and pathogenesis are unclear and need to be investigated through different approaches (2,3). In NLPHL, which is a malignant B-cell lymphoma, antigen stimulation results in the formation of germinal centers by secondary lymphoid follicles, which promotes the differentiation of germinal center B cells (GCBs) into long-lived plasma cells and memory B cells. Any abnormality during the differentiation can lead to the development of NLPHL. Histone post-translational modification (HPTM) can change the chromatin structure in different ways, thus affecting the transcription process. SUMO modification is characterized by covalent combination and dynamic reversibility, it is the only inhibitive HPTM mode found so far, which can prevent the occurrence of active HPTM.

A keyword search of the GEO database was conducted. First, the term “Lymph Nodes” was entered, and then “Homo Sapiens” was selected, yielding a total of 43 datasets. Finally, GDS4977 was identified from the GSE47044 series. This dataset contained 35 samples, including 30 microdissected tumor samples and 5 sorted CD77 samples. The GPL6244 platform, which uses the Affymetrix Human Gene 1.0 ST Array, was used.

The EnrichmentMap and CytoHubba plug-ins in the Cytoscape software were used to sort the enrichment pathways and screen hub genes.

The screened hub genes were further screened for core genes by comprehensive analysis using the STRING and Reactome databases. 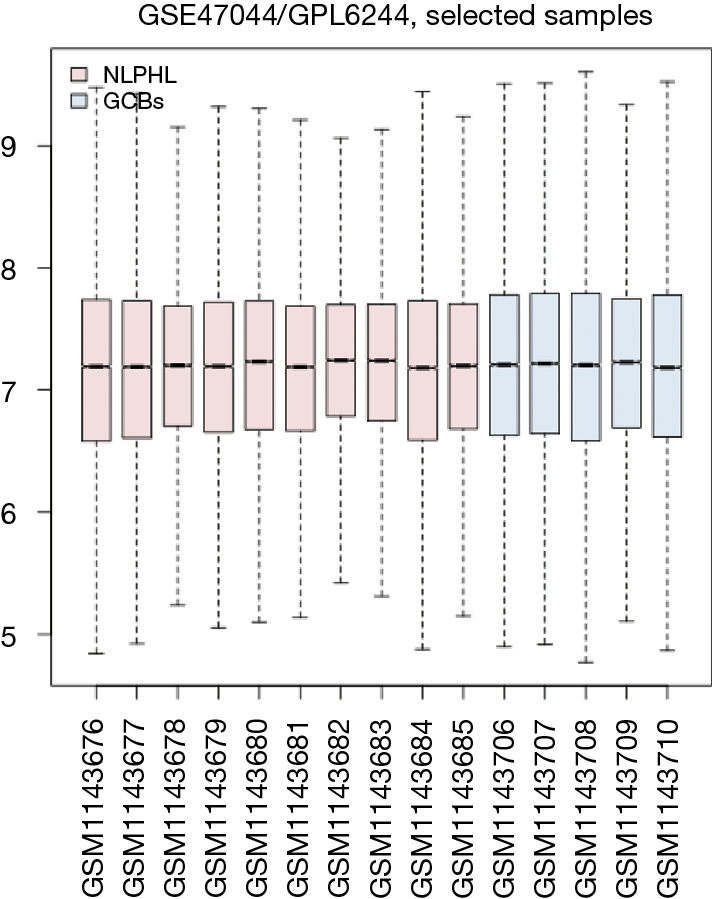 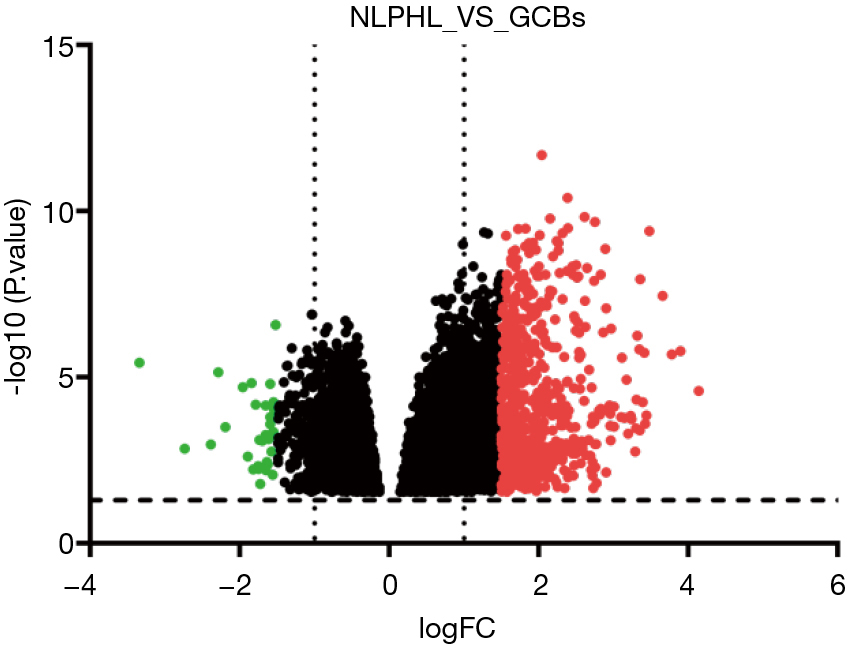 Results of GO-BP and Reactome pathway enrichment analyses for DEGs

The enrichment results of GO-BP and Reactome pathway analysis in g:Profiler were visualized in Cytoscape using its EnrichmentMap plugin, and a total of 113 nodes and 2,108 edges were yielded. The top 10 pathways were screened by the node degree by using the MCC algorithm in the CytoHubba plugin (Table 2). In total, 19 hub genes were identified (Table 3). 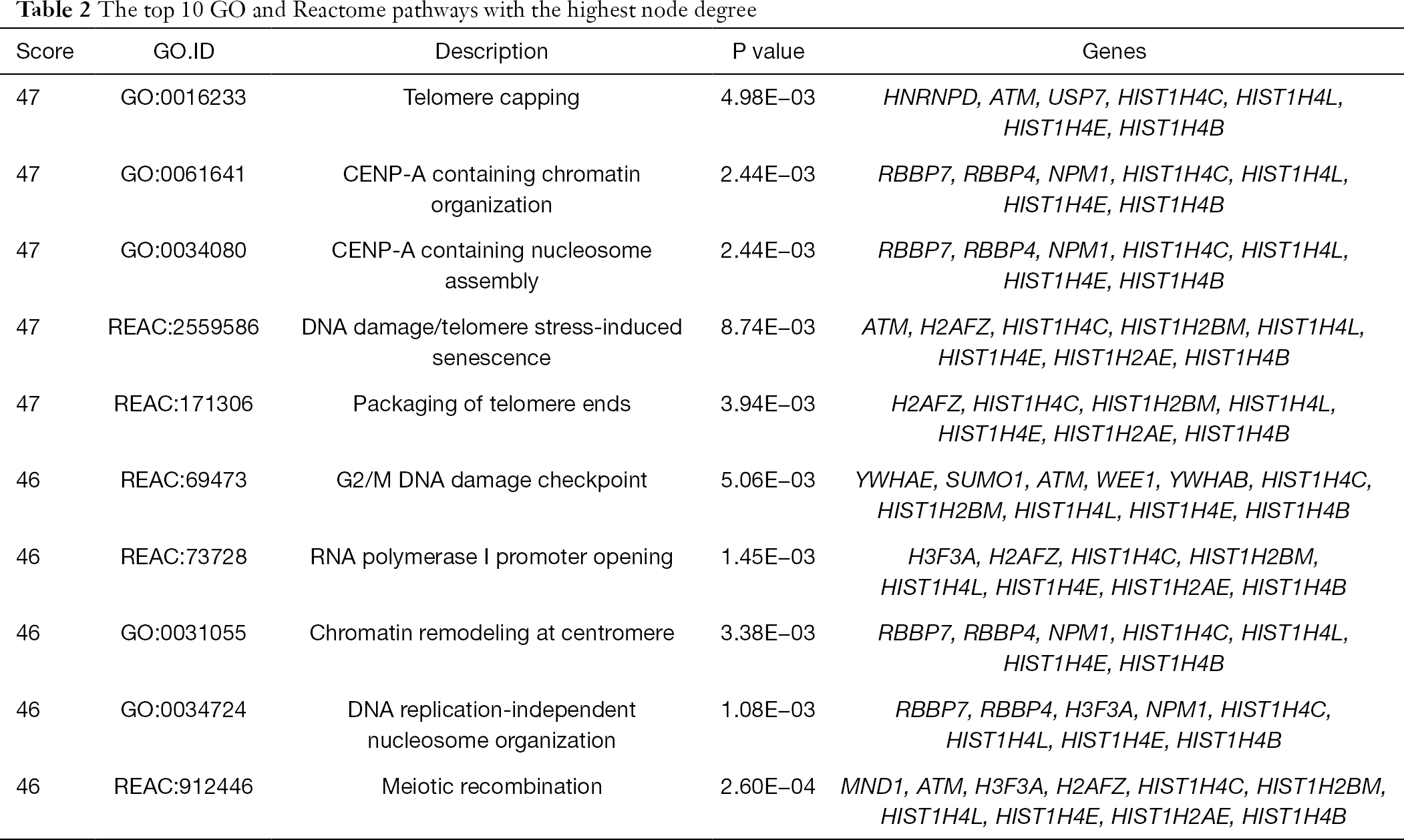 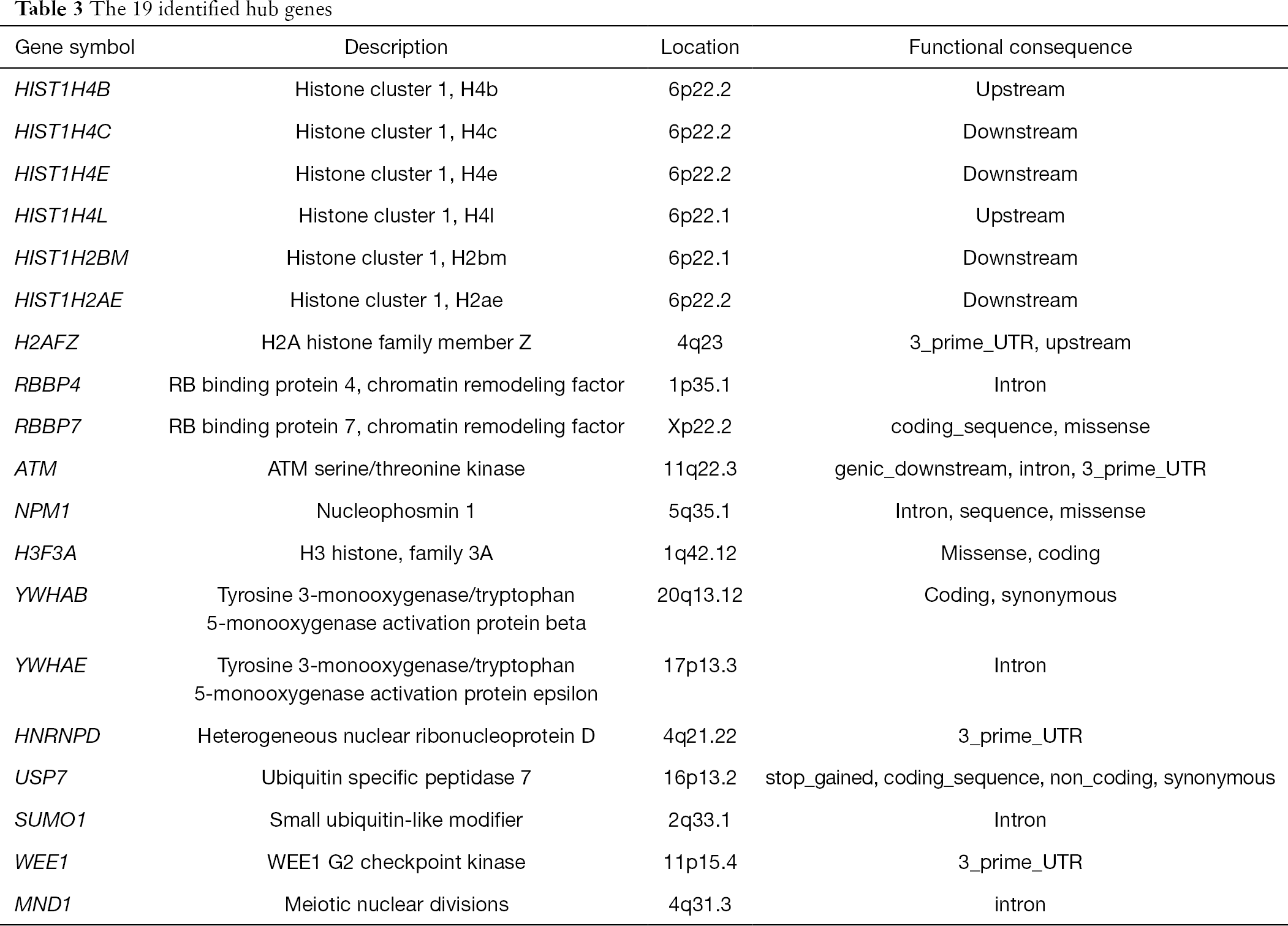 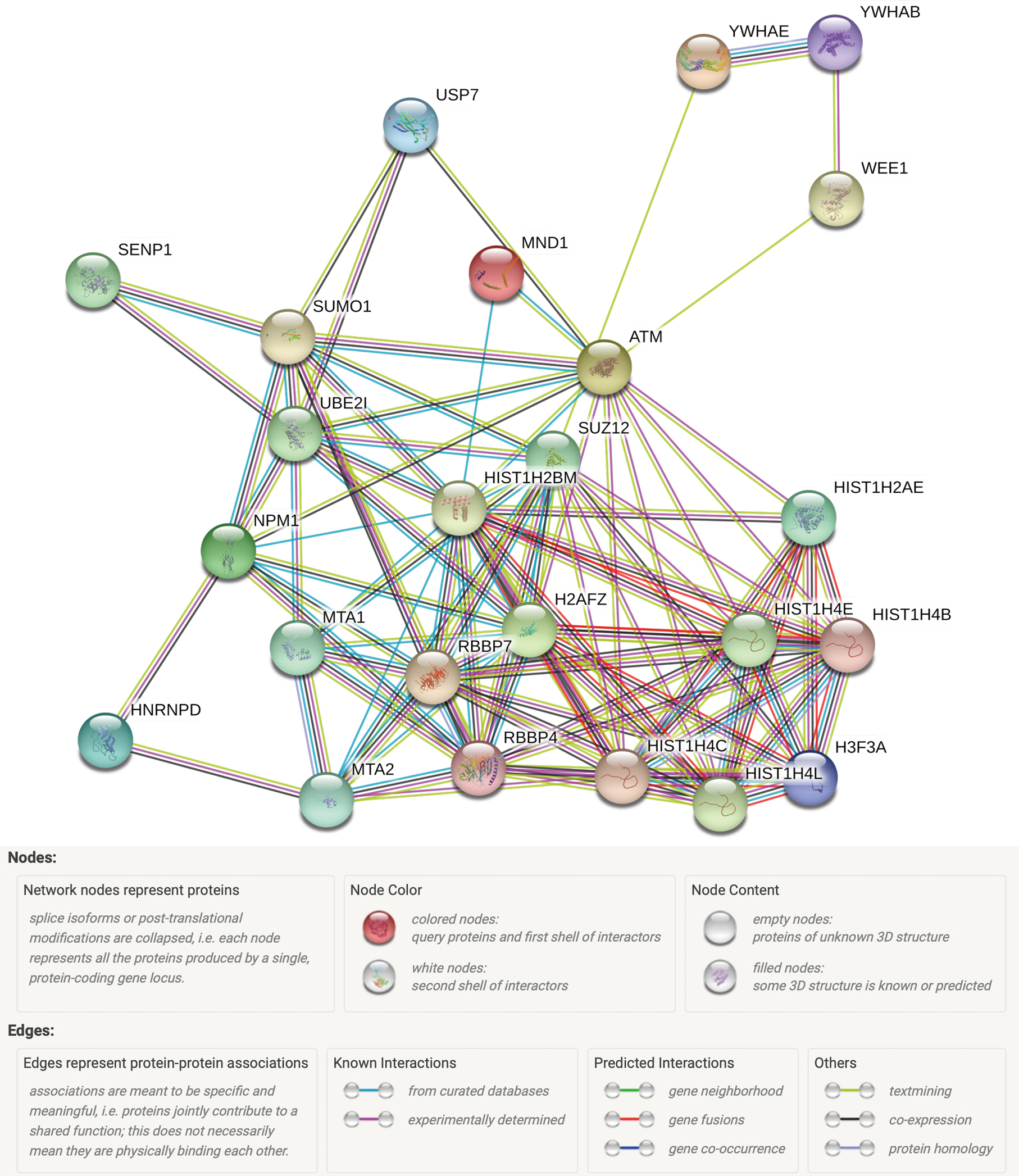 Figure 4 shows the smallest cell cycle pathway with the smallest entities P value (1.11E−16) in the Reactome database. Chromosome maintenance, identified by the POSITION function on the Reactome database, was the cellular process participated in by the largest number of hub genes (Figure 5). In the two pathways and sub-pathways above, the core genes NPM1, RBBP4, and RBBP7, together with core histones, participated in nucleosome assembly in the form of a complex (Figure 6). The core gene SUMO1 and histone H4 formed a complex (SUMO1-HIST1H4), which participated in the entire cell cycle; in essence, histone H4 underwent SUMO1 modification (Figure 7). 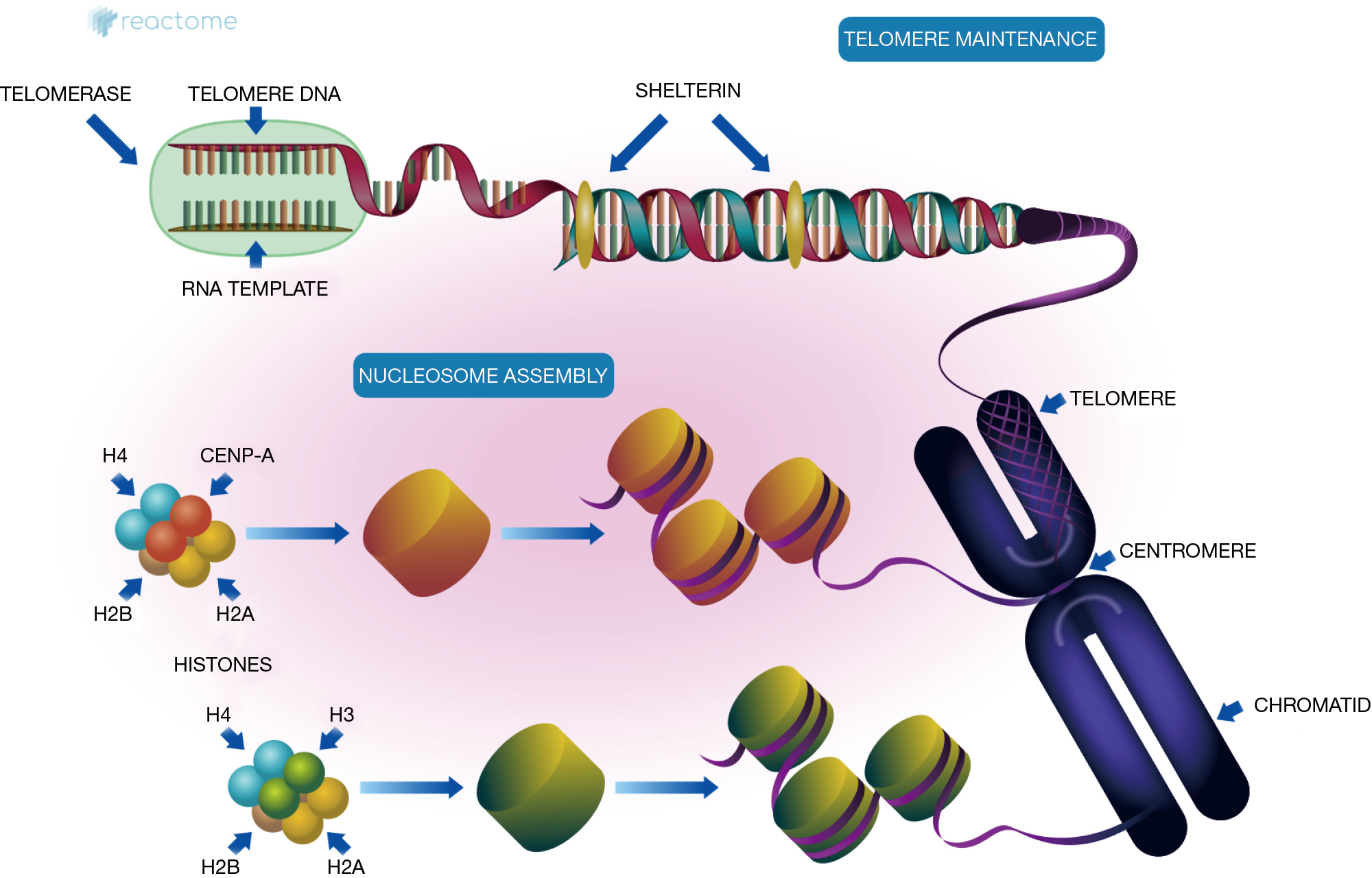 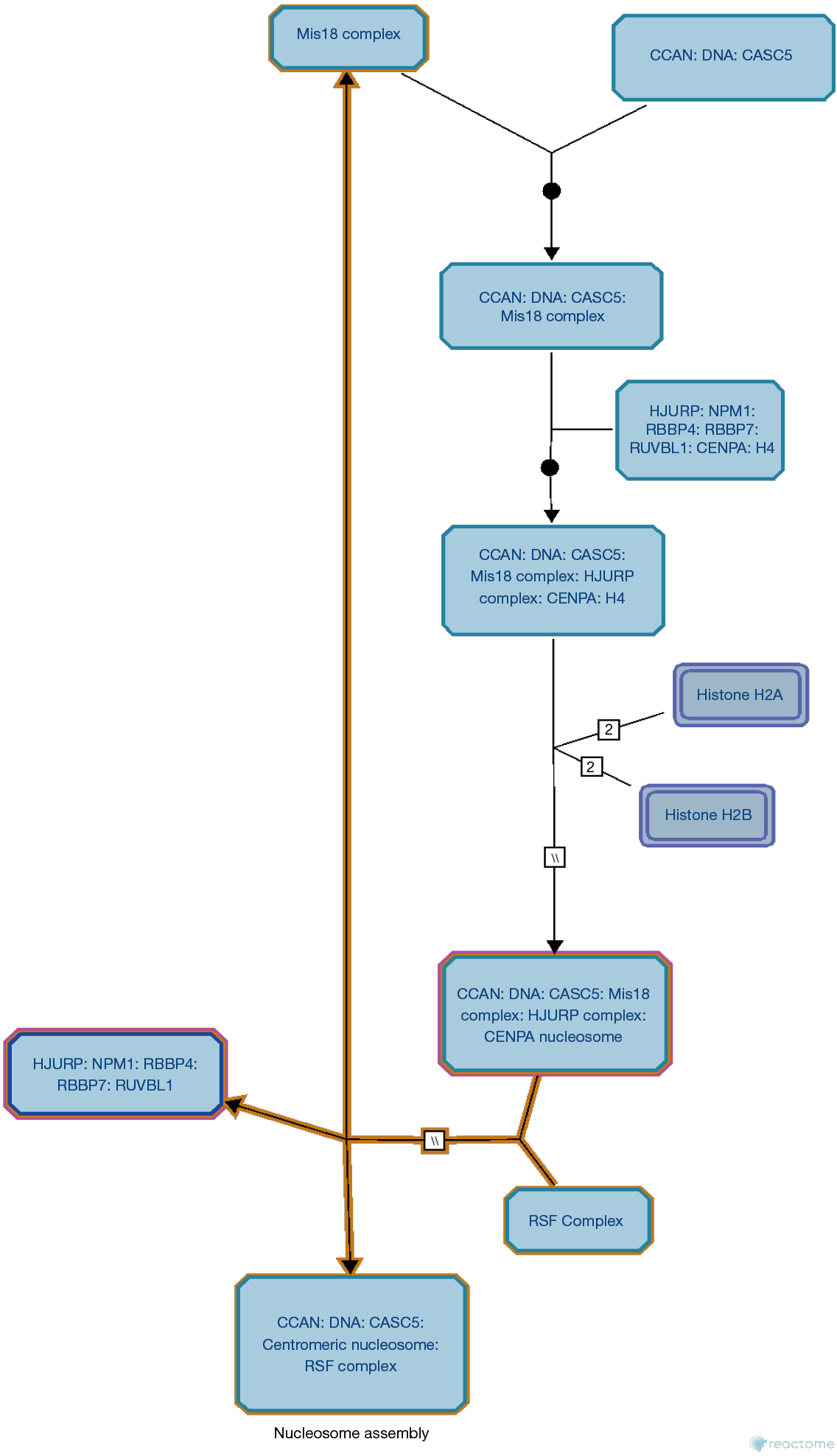 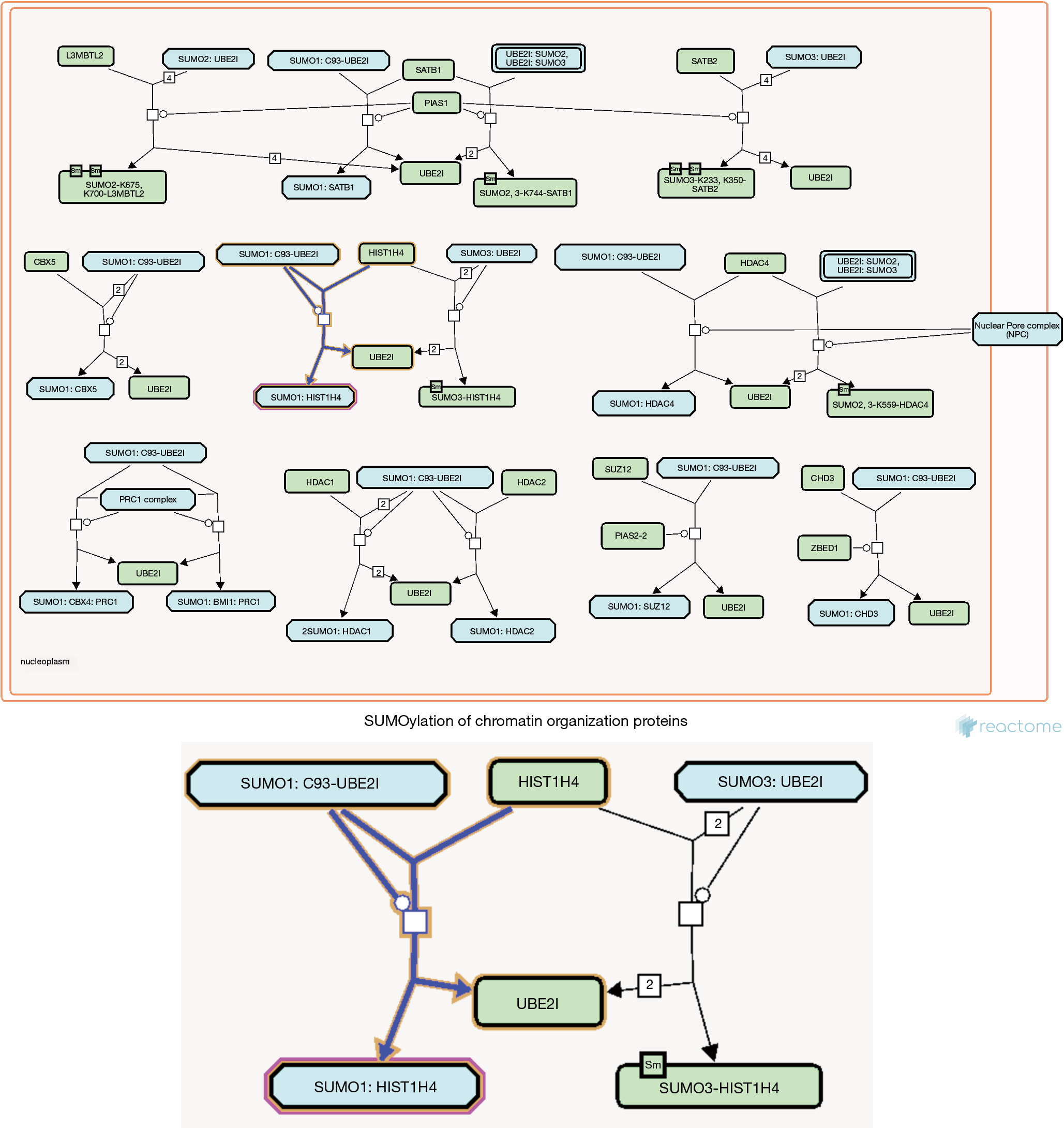 The prognosis of NLPHL, a rare type of HL, is good in the early stages. However, treating advanced-stage NLPHL, because of it typically invasive nature, is challenging and the prognosis is poor (1). Although NLPHL and cHL have different pathological and immunophenotypical features, due to the lack of well-recognized therapies, NLPHL is often treated as cHL. It is difficult to explore the pathogenesis of NLPHL and suitable treatments using whole genomic sequencing technology in large-scale studies; however, core genes can be identified through microanalysis utilizing the currently available databases. In our current study, gene chip analysis in the GPL6244 platform identified 19 hub genes, among which 8 were histone genes, and PPAs existed among histones encoded by these 8 genes. It was proposed that there were differences in histone expressions between NLPHL and GCBs. Histone is an octamer comprising one (H3-H4)2 tetramer and two H2A-H2B dimers. Recent studies on the Telomere Maintenance pathway also confirmed the hypothesis that the core histone was jointly formed by HIST1H4B, HIST1H4C, HIST1H4E, HIST1H4L, HIST1H2AE, H2AFZ, HIST1H2BM, and H3F3A (4,5).

The nucleosome is the basic structural unit of the chromosomes (6). The core nucleosome, a disc-like structure with 146 bp of DNA wrapped around the core histone octamer (4,7), plays a distinctive role in centromere assembly, correct separation of chromosomes, and normal cell division (8,9). As shown in Figure 6, the core genes NPM1, RBBP4, and RBBP7, along with HJURP and RUVBL1, carry CENPA, H4, and CCAN:DNA:CASC5 to bind to histones H2A and H2B, finally presenting CENPA, H4, H2A, H2B, and CCAN:DNA:CASC5 to RSF Complex to complete the assembly of core nucleosomes. During the assembly of core nucleosomes, histones are transported and transferred by the core genes NPM1, RBBP4, and RBBP7. Centromere protein A (CENPA) is a specific variant of centromeric histone H3 and also a characteristic mark of centromere (10,11). Each chromosome has only one centromere. If the centromere is missing, the duplicated chromosomes are separated randomly, leading to the deletion or doubling of the chromosomes of the daughter cells. This is one of the important mechanisms of oncogenesis (10,12-14).

Histone chaperones are defined as a group of proteins that bind and transport histones and regulate the assembly/deassembly of nucleosomes (4,15). The nucleophosmin (NPM) was the first histone chaperone to be discovered, and nucleophosmin 1 (NPM1) is a key member of the NPM family (16). Studies have shown that NPM1 can maintain genomic stability and regulate cell apoptosis; thus, it possesses both oncogenic and tumor suppressor functions, which are mainly determined by the level of NPM1 expression (17,18). A meta-analysis of 11 published studies involving 997 patients showed that, in solid tumors, the upregulation of NPM might be a potential therapeutic target and NPM overexpression might be a biomarker of poor prognosis (19). Patel et al. found (20) that patients with acute myeloid leukemia (AML) with NPM1 mutation had increased complete response and overall survival rates; in contrast, AML patients with NPM1, FLT3-ITD, and DNMT3A mutations tended to have poor prognosis. RBBP4 and RBBP7 are chromatin remodeling factors, which are involved in histone deacetylation (21,22). As shown in Figure 6, NPM1, RBBP4, and RBBP7 exist in the Nucleosome Assembly pathway; after the completion of histone transportation, they bind with HJURP and RUVBL1 and are finally removed from the core nucleosomes. No evidence has shown either RBBP4 or RBBP7 to be a histone chaperone or to be directly bound to histones and, thus, behind the development of NLPHL . It is speculated that RBBP4 and RBBP7 play a regulatory role in NPM1 expression during the occurrence and development of NLPHL.

Histone is a substrate for various post-translational modifications. Histone modification, which is an epigenetic mechanism that regulates gene expression, is the main source of variation. Common modifications include acetylation/deacetylation, phosphorylation, methylation, citrullination, ubiquitination/deubiquitination, and SUMOylation (14). Based on the POSITION function in the Reactome database, we found 232 SUMO1 positions in the cell cycle pathway, among which 224 positions existed as proteins, 7 as complexes, and 1 as an interactor; 205 positions were located in the cell cycle (including mitosis, meiosis, and checkpoints) and 27 in the chromosome maintenance. Only SUMO1-HIST1H4 was involved in all four processes of cell cycle; in addition, it is the product of the direct binding of SUMO1 to HIST1H4. We speculate that NLPHL involves SUMO1 modification of histones, and the modification site is located on histone H4 (Figure 7).

Small ubiquitin like modifier1 (SUMO1) is a member of the SUMO family (23). SUMO is a ubiquitin-like protein, but its function differs somewhat from ubiquitin proteins. It modifies the substrate protein to regulate the activity of the target protein and its interaction with other molecules. It also participates in nucleocytoplasmic transport, transcriptional regulation, and cell apoptosis (24). Normally, the effects of SUMOylation are negative (25-27). Many studies have shown an association between SUMOylation and a variety of tumors including lung cancer, breast cancer, and ovarian cancer. In primary liver cancer, SUMOylation is also associated with multiple drug resistance (28). The SUMOylated MAFB protein can promote the pathogenesis of rectal cancer, and knockdown of SUMO E1 or SUMO-conjugating enzyme (E2) inhibits the maintenance and self-renewal of rectal cancer stem cells (29). SUMOylation is a reversible process. DeSUMOylation is regulated by the SUM0-specific protease (SENP) family (30). However, the SENPs family is large, and different members exhibit different regulatory effects on tumors. The overexpression of SENP1 and SENP3 has been found to promote tumorigenesis (31,32), whereas high expressions of SENP2 and SENP5 may hinder cancer development (33,34).

In summary, knockdown of NPM1 expression or mutant NPM1 may interfere with the assembly of core nucleosomes, prevent chromosome separation, and thus suppress tumor occurrence and growth. Moreover, histone modifications can be destroyed by knockout of SUMO1-activating enzyme or overexpression of SENP2/5 to achieve a therapeutic effect in NLPHL; however, new laboratory technology is required to verify our findings. Furthermore the specific site on histone H4 where the SUMO1 modification occurred was not identified in this study, which also warrants further investigation.

Funding: Supported by the National Natural Science Foundation of China (grant No.: 81660035).

Conflicts of Interest: All authors have completed the ICMJE uniform disclosure form (available at http://dx.doi.org/10.21037/tcr-20-1994). The authors have no conflicts of interest to declare.