Stomach cancer is the fifth most generally diagnosed cancer, and the third primary cause of cancer-related mortality globally (1,2). The mainstay treatment for stomach cancer is surgical resection. Still, perioperative strategies containing chemotherapy and radiotherapy are regarded as effective approaches to enhance patient survival (3-5). Moreover, combination therapy with 5-fluorouracil (5-FU), platinum, and trastuzumab is recognized as the preferred chemotherapy choice for patients with metastatic stomach cancer (6). Meanwhile, many genes play a crucial role in stomach cancer chemotherapy. For example, compared with standard chemotherapy alone, its combination with trastuzumab can significantly prolong the average survival time of patients with Hairy-related 2 (HER2) positive stomach cancer (7). Also, the combined expression levels of MYC proto-oncogene (MYC), Epidermal growth factor receptor (EGFR), and Fibroblast growth factor receptor 2 (FGFR2) were associated with the poor survival rate of chemotherapy-treated patients (8). Loss of MutL homolog 1 (MLH1) in stomach cancer patients is related to chemoresistance (9).

Human antigen R (HuR) belongs to the Elavl family; it binds to AU-rich RNA elements in 3¢-UTR with a high affinity to control the stability and translation of target mRNA (10). HuR is ubiquitously expressed and vital for the modulation of numerous mRNAs involved in cellular proliferation, differentiation, migration inflammation, and tumorigenesis (11,12). Increasing evidence indicated that the upregulated expression level of HuR had been found in a variety of human cancers, including stomach cancer (13). Overexpression of HuR improves the stabilization of mRNA, coding proteins involving TNFα, cyclins, matrix metalloproteinase 9 (MMP-9), and cyclooxygenase 2 (COX-2) (14). Meanwhile, the inhibition of HuR expression can suppress the progression of cancer, such as MS-444, miR-22, and colon carcinoma-1 (OCC-1) (15,16). The cancer cells’ characteristics are regulated by HuR in other words (17). In endothelial-specific Elavl1 knock-out mice, oncogene-induced mammary cancer showed decreased revascularization, and Lewis lung carcinoma tumor implant exhibited significantly reduced tumor volume and weight (18). Moreover, Apcmin/þ mice, a transgenic animal model of intestinal tumorigenesis, had attenuated polyposis after Intestinal HuR deletion (19). Knocked down of HuR expression caused by small interfering RNA suppressed cell proliferation and migration in the human prostate cancer cell line (20).

HuR is predominantly located in the cell nucleus; its translocation to the cytoplasm plays a vital role in the protective effects on related mRNAs (21-23). The nucleo-cytoplasmic HuR shuttling, in response to various environmental stimuli, is regulated by a major cellular signaling pathway (24). Previous studies have shown that HuR shuttling can be activated by the cell-cycle checkpoint kinase 2 (Chk2), PKCα, and PKCδ through direct phosphorylation (25-27). HuR plays a key role during zebrafish primitive embryonic erythropoiesis, for instance, mediated by PKC (23,28) . Since the cytoplasmic abundance of HuR is increased in various types of cancers, it is considered as a likely indicator for the therapeutic effect and survival prognosis of particular cancerous patients (25).

5-FU acts as an anti-metabolite, metabolizing to FdUMP intracellularly, interfering with DNA synthesis and repairment and causing cell damage and death, particularly in tumor cells (29). Therefore it is used to treat various cancers, including gastrointestinal cancer, breast cancer, and pancreatic cancer (2,30). 5-FU improved the HuR cytoplasmic expression in pancreatic ductal adenocarcinoma (PDA) cells and induced the accumulation of HuR in breast cancer cells. However, the underlying molecular mechanism concerning HuR and 5-FU is still unclear in stomach cancer cells. Interestingly, we showed that 5-FU significantly downregulated the protein level of cytoplasmic HuR with 5-FU treatment, without any change in the protein level of total HuR. Also, PKC inhibitor and PKCδ siRNA suppressed nucleo-cytoplasmic HuR shuttling in SGC cells. And decreased expression of HuR resulted in decreased proliferation of SGC cells.

Cell viability was assessed by MTT cell proliferation and cytotoxicity assay kit (Beyotime Biotechnology, Cat. # C0009). SGC cells were seeded in 96-well plates at a density of 5,000 cells/well. Thiazolyl blue tetrazolium bromide (MTT) solution was prepared following the instructions and incubated with the growing cultures at a final quantity of 10 µL for 4 hours at 37 °C. Then add 100 microliters of Formazan solution to each well and incubated at 37 °C for 4 hours. Absorbance at 570 nm was measured on a multi-well scanning spectrophotometer (UV-2100; UNICO, Shanghai China), and the results were expressed as a percentage (%) of the control.

5-FU does not affect HuR and PKCδ total protein expression

Previous studies have reported that 5-FU induced accumulation of HuR and PKC can regulate HuR expression by phosphorylating HuR during embryogenesis in zebrafish (2). Indeed, when SGC cells were treated with ~IC50 doses of 5-FU (20 mM), there was no notable change in total protein expression levels of HuR and PKCδ (Figure 2A,B,C).

5-FU blocks shuttling of HuR from nuclear to cytoplasm

Previous studies showed that 5-FU and other chemotherapy agents induced HuR translocation from the nucleus to the cytoplasm in PDA cells, which is a necessary step for HuR function in the stabilization and translational control of target mRNAs (31). In contrast to the reported results, when we treated SGC cells with IC50 5-FU (20 mM), western blot results exhibited that the amount of HuR transferred from the nucleus to the cytoplasm gradually declined with one day, two days, and three days treatment (Figure 3A,B). Immunofluorescence of HuR was similar to the results of cytonuclear fraction, and the number of HuR nucleated cells was significantly reduced compared with the control group after treatment with 20 µM 5-FU for three days (Figure 3C,D). These results show that 5-FU can inhibit the nucleation of HuR, which may be caused by different tumor cell properties. 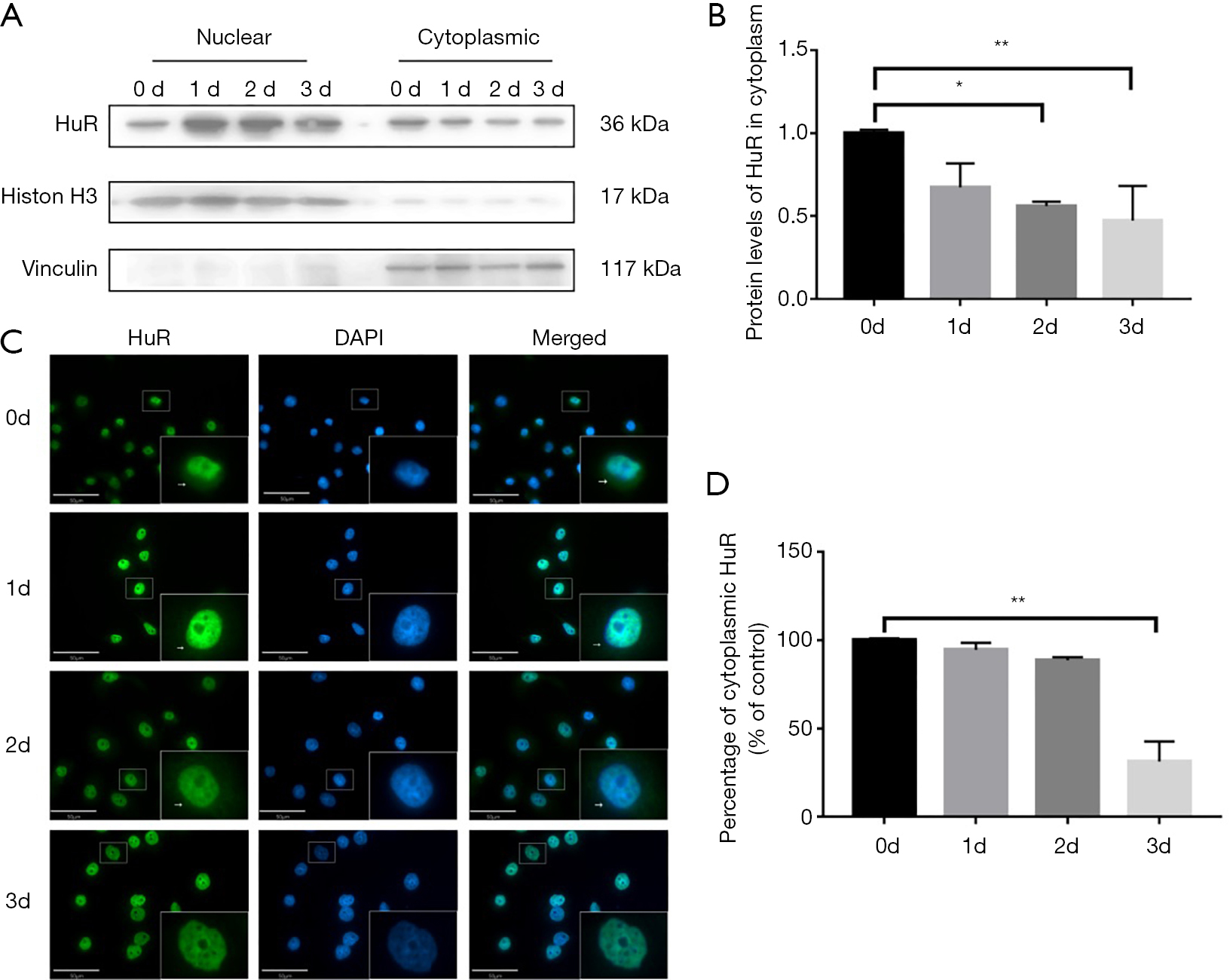 Our previous studies showed that blockade of PKCs suppressed HuR translocation from the nucleus to cytoplasm in k562 cells (28). Therefore, we suspected that the PKCδ expression decreased during the 5-FU treatment, which led to the HuR nucleus decreased. The nuclear-cytoplasmic shuttle of HuR is an essential step for function, which is commonly regulated. For example, PKCδ can phosphorylate Ser221 and Ser318 sites of HuR to control its nucleation. To further study the effect of PKCδ on the nucleocytoplasmic shuttle of HuR, we examined the localization of HuR by PKCs inhibitors treatment in SGC cells. Western blot showed that although there is no statistical difference, as the increase of staurosporine concentration, the amount of HuR protein in the cytoplasm gradually decreased (Figure 4A). However, Immunofluorescence showed that HuR nucleated cells were significantly reduced after three days of staurosporine stimulation at 200 nM (Figure 4B). Also, knockdown of PKCδ induced a significant reduction of HuR shuttling from nuclear to the cytoplasm (Figure 4C,D). In addition, knocking down HuR significantly reduced cell proliferation (Figure 4E,F). These results further showed that the nucleo-cytoplasmic shuttling of HuR regulated by PKCδ is necessary for SGC cells.

In this study, 5-FU blocked the translocation of HuR from the nucleus to the cytoplasm in a time-dependent manner. Still, no significant changes in total HuR were observed after 5-FU treatment. Chemical inhibition of PKCδ and PKCδ siRNA further suppressed HuR translocation from the nucleus in SGC cells. These results show that the blockade of HuR shuttling was mediated by PKCδ in SGC cells. And decreased expression of HuR resulted in decreased proliferation of sGC cells. Thus, the anti-cancer effect of 5-FU was due to the reduction of PKC mediated cytoplasmic translocation of HuR.

Previous studies have reported that HUR protein levels are increased in a variety of human cancers (32). HuR was expressed at higher levels in gastric adenocarcinoma tissue, which positively associated with enhanced cytoplasmic translocation of HuR (33). Cytoplasmic HuR expression was associated with increased cytoplasmic advanced stage grade, intestinal type, non-resectability, and poor patients’ survival (34). High cytoplasmic expression of HuR was an independent prognostic factor of survival for patients with Gallbladder carcinoma and Urothelial cancer (35-37). Recent studies have reported that the expression level of HuR in SGC cells significantly increased compared with the human gastric epithelium cell line (GES-1), the proliferation ability, and the migratory abilities of si-HuR-transfected SGC-7901 cells were significantly decreased (38). Moreover, over-expression of the circ-HuR suppresses HuR expression, resulted in a reduction of the growth and aggressiveness of gastric cancer. Pyrvinium pamoate, a HuR nucleocytoplasmic translocation blocker (39), has been reported to reduce cancer growth for several cancer types in vivo. Our results also showed that the cytoplasmic HuR was strongly decreased due to 5-FU, which indicates a negative regulatory role of HuR in gastric cancer. Conversely, in a previous study, HuR expression levels were reported to be significantly enhanced upon 5-FU stimulation in breast cancer cells (2). 5-FU induces the cytoplasmic export of HuR in pancreatic cancer (30). These findings may be related to the effects of 5-FU on cancer appear to be cell type-specific.

Protein kinase C (PKCs) are involved in the regulation of proliferation, cell junctions, apoptosis, and migration (40,41). Although the role of PKCs in cancers remains controversial (42), PKCδ is a widely known important apoptosis regulator, which mainly has the function of promoting apoptosis (26). However, PKCδ also has some anti-apoptotic functions, which have been described in previous studies (43,44). HuR phosphorylation at Ser 318 by PKCδ was found a strong increase in colon carcinomas tissue (45). The knockdown of PKCδ in ovarian cancer suppresses cell proliferation induced by the miR-940 and increased cell apoptosis by miR-940 inhibitor. PKCδ inhibition weakens breast cancer’s proliferative capacity (46,47). 5-FU caused a declining trend of PKC expression in colon cancer cell lines. Our results show that PKC inhibitor Staurosporine and knockdown of PKCδ suppressed HuR translocation from the nucleus to cytoplasm in SGC cells. In a previous study from our group, PKCδ and PKCα-mediated phosphorylation of HuR plays a critical role in cell differentiation and zebrafish embryonic erythropoiesis (28). We suggest that PKCδ-mediated phosphorylation of HuR plays a role in inhibiting cell proliferation, and 5-FU inhibits this process in SGC cells.

The cytoplasmic translocation of HuR was controlled by the phosphorylation of PKC. Staurosporine decreases HuR accumulation in the cytoplasm by blocking PKCδ infractions of human mesangial cells (14). Also, inhibition of PKCα at Ser158 and Ser221 by either knockdown or inhibitors blocked nuclear ELAVL1 export to the cytoplasm mimicking the phenomenon that PKCδ blockade with inhibitors (26). Knockdown or blockade of PKCs showed a degraded tendency to embryonic erythropoiesis by suppressed cytoplasmic translocation of HuR (28). Consistent with these results, administered PKC with Staurosporine and PKCδ siRNA in SGC cells that HUR expression was significantly decreased in the cytoplasm compared with counterpart.

In conclusion, our data propose a new sight of the molecular mechanism of 5-FU for gastric cancer. 5-FU reduces the nucleo-cytoplasmic shuttling of HuR was mediated by PKCδ, leading to a decrease in HuR in the cytoplasm, which may further promote apoptosis and inhibition of cell proliferation to play an anti-cancer effect. Our research advances to understand the molecular mechanism of 5-FU as a chemotherapy drug in gastric cancer. It supplies clues for the development of new strategies for PKC-mediated HuR cytoplasmic shuttle as a potential therapeutic target for the treatment of gastric cancer.

Conflicts of Interest: All authors have completed the ICMJE uniform disclosure form (available at http://dx.doi.org/10.21037/tcr-20-2129). The authors have no conflicts of interest to declare.