The study was approved by the Ethics Committee of Zhejiang Cancer Hospital (No 2018-186). All animal tests were performed in strict accordance with the recommendations in the Guide for the Care and Use of Laboratory Animals by the National Institutes of Health (12) and efforts were conducted to minimize the number of animals used and any discomfort experienced. The animal tests were conducted in the animal experimental research center, Zhejiang University of Traditional Chinese Medicine from April-June 2018.

The skin of the back and ventral side was shaved, and the routine area was sterilized and prepared. The specified volume of subcutaneous adipose tissue and the specified size of skin on the back were removed under aseptic conditions. The epidermis of the skin was extracted, and the dermis was retained and sutured into a prosthesis capsule. The autologous subcutaneous adipose tissue was placed into the capsule, and the capsule was sutured into a specified volume of prosthesis. The prosthesis was sterilized.

In each mini-pig, 12 sides of the abdominal wall near the nipple were chosen. The prostheses were implanted into the subcutaneous tissue of the abdominal wall to form observable breast like shapes. Then, the incisions were sutured. After the operation, the mini-pigs were administrated oral ibuprofen tablets (4 mg/kg) and the skin incisions were smeared with ketoprofen gel for 3 days. During this period, 800 thousands units of penicillin sodium were injected for 3 days.

We observed the general situation of the mini-pigs after operation, including their mental state, diet, local state of implanted sites, and the appearance and texture of implants at the implanted sites. The presence of any acute and chronic inflammatory reactions such as exudation, fibrous tissue hyperplasia, encapsulation, contracture, sclerosis or calcification, etc. were observed. At the same time, the prostheses and their surrounding local tissues were removed at the 14th and 30th days after operation.

All data were expressed as the mean ± standard deviation (SD). Analysis of Variance (ANOVA) single factor analysis of variance and multiple comparison of Tukey were used in this study. Differences were considered significant when P<0.05. Statistical analyses were conducted using Graphpad Prism 6 software (Graphpad software, USA).

Outcomes of in vitro experiment

HE histopathological observation was performed after different treatments of autologous adipose tissue with or without external dermal capsule. The results showed that there were no significant changes in the size and histomorphology of autologous adipose tissue after different treatments, but the adipose tissue structure inactivated by heating was the clearest among them (Figure 1). In addition, upon examination of the dermal histopathology, there was no obvious abnormality in dermal structure in the PFD group compared with the FD group, but the dermal interstitium in the FID group was compact or slightly broken. Furthermore, the basic structure was still acceptable (Figure 1). 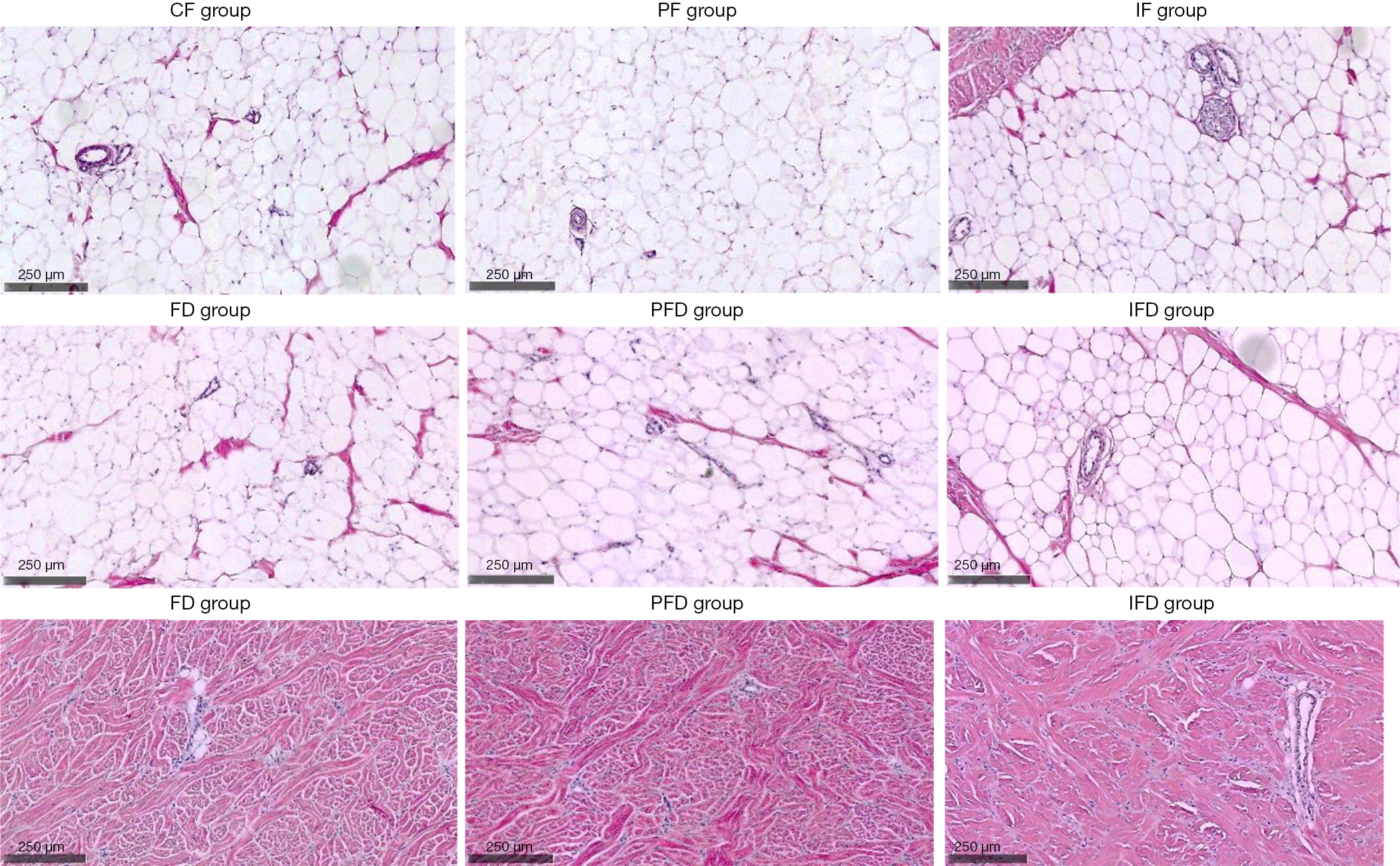 Figure 1 Histopathological changes in adipose tissue and dermis after different treatments (HE ×10).

Quantitative analyses of the size of the adipocytes were performed for autologous subcutaneous adipose tissue using different treatments in vitro. There were no significantly statistical differences in distribution and average size of autologous adipose tissue among six groups (P>0.05, Figure 2).

Results of in vivo experiments

On the first 3 days after operation, the diet and drinking water of the mini-pigs were not abnormal, the spirit was general, and the activities were mostly standing or suppressing. The skin in the surgical area was slightly red, but no obvious abscesses or dehiscence was found. At the 7th day after operation, the mental state of the mini-pigs had obviously improved. There were more “arch” activities, and the wounds were partially healed and dried. 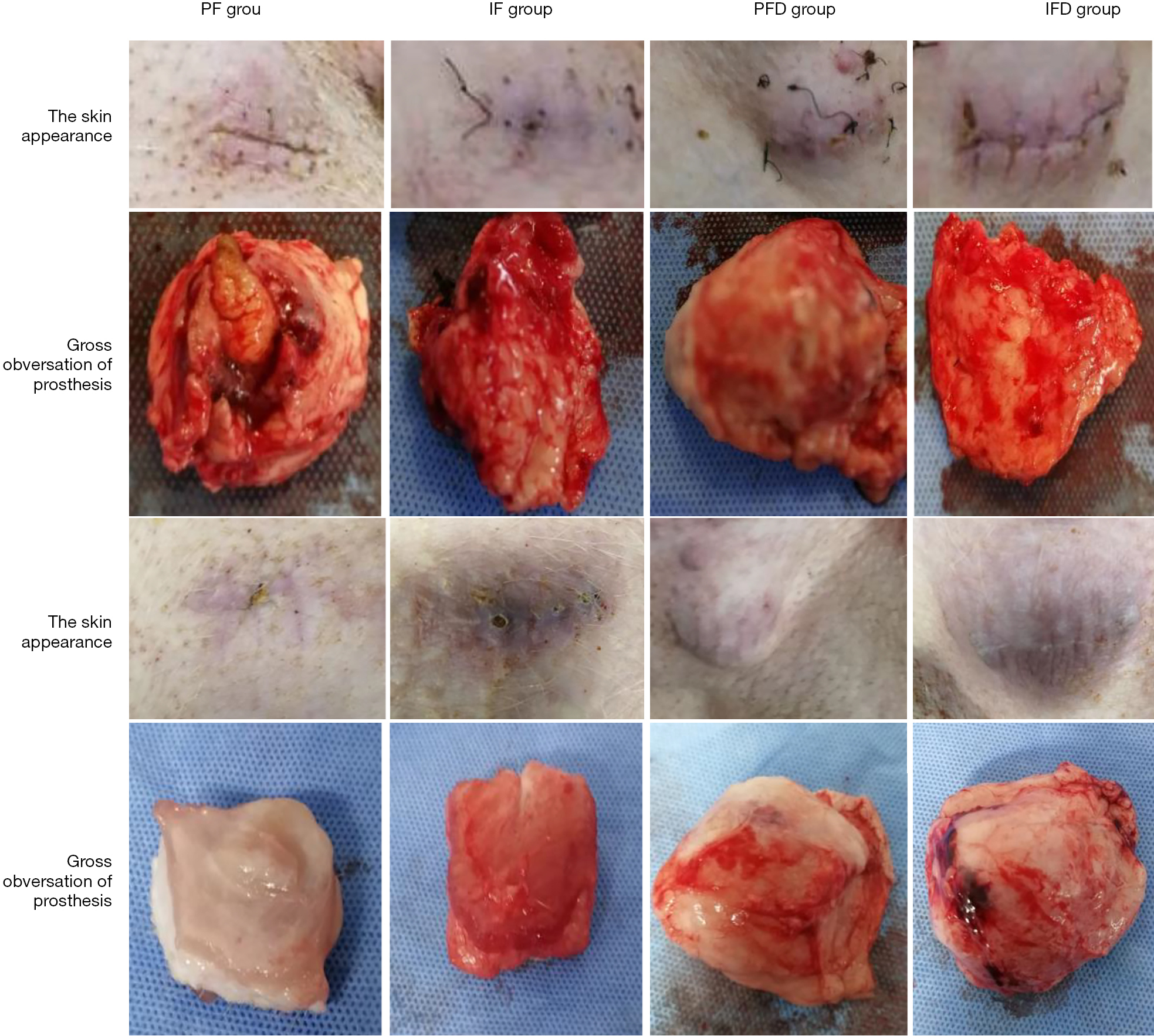 Figure 3 The skin appearances and gross observation of prosthesis after 14 and 30 days from implantation.

At the 30th day after operation, the wounds healed well at the implant sites. Compared with pre-implantation, the skin protuberances in the PFD and IFD groups were maintained or more prominent, and the IFD group had the best cosmetic effect. The prosthesis in the IFD group was slightly elastic, and its elasticity was not as soft as that of normal adipose tissue. After the prostheses were harvested, it was found that the prostheses in the PF and FI groups were obviously contracted or absorbed and were surrounded by a large number of fibrous connective tissues. On the other hand, there was less fibrous connective tissue proliferation around the prostheses in the PFD and FID groups (Figure 3).

Figure 4 Histological changes of different treated prostheses implanted in mini-pigs for 14 and 30 days.

At the 30th day after implantation, adipocytes in the prostheses of PF and IF groups were almost completely absorbed and replaced by proliferative fibrous connective tissues, and a large number of infiltrated inflammatory cells were observed. No neovascularization was found in the adipose tissues. In the PFD group, a small amount of proliferative fibrous connective tissues and infiltrated inflammation cells were observed in adipocytes wrapped in the dermis. Meanwhile, neovascularization was observed in the adipose tissue and the morphology and structure of adipocyte were normal. However, a very small amount of proliferative fibrous connective tissues and infiltrated inflammatory cells were found in adipocytes wrapped by dermis in the IFD group. Neovascularization (red arrows) was also observed in these adipose tissues, and the adipocyte morphology was normal (Figure 4).

Breast silicone gel prosthesis implantation is widely used for breast reconstruction domestically and overseas (13). After the breast is completely removed, breast silicone gel prosthesis is placed into the breast cavity or behind the pectoralis major muscle so as to achieve breast reconstruction. After implantation of the silica gel, the body will produce a foreign body reaction and local inflammation. It will then form a layer of membranous structures to encapsulate the prosthesis, known as the prosthesis capsule. In a few patients, this layer of capsule will become thick, hard, or even produce a compression prosthesis deformation and pain symptoms, known as a “capsular contracture” (14). In serious cases, it even induces local tissue canceration (15,16). Other complications included local flap necrosis, wound dehiscence, prosthesis rupture, prosthesis displacement, infection and so on (17).

The mold manufacturing process of the existing breast prosthesis is complex and generally designed only for patients who underwent entire breast gland excision, so specifications are very limited. However, the size and shape of the missing breast glands in early stage breast cancer patients after breast conservative surgery vary, thus no suitable prosthesis can be used. A crosslinked flexible elastic silicone rubber composition has been used to solve the problem of filling and shaping the tissue after partial breast gland loss (18), but these materials were chemical foreign bodies and not autologous tissue. After implantation, there are risks of allergy, rejection, carcinogenesis, rupture, aging, displacement and slippage, local tissue contracture around the prosthesis, limited in vivo time, and surgical removal. In addition, prosthesis materials are mainly imported and expensive. The authors made a conformal prosthesis from patients’ hair for breast reconstruction in patients with partial breast loss, but it is difficult to meet the needs of shaping due to the limited amount of hair in clinical practice (19).

Compared with other body parts, the breast has less blood supply and looser structure, so the rates of absorption and implantation-related complications are higher. Del Vecchio et al. showed that the implanted fat particles within 2 mm from microvessels could survive (27). Based on this problem, this study aimed to design inactivated autologous adipose tissues and dermal outer capsules to establish a breast prosthesis.

To our knowledge, the thickness of the dermis in the skin tissues is about 1–2 mm, and the dermis is mainly composed of fibroblasts, and the fiber and matrix they produce. It also contains blood vessels, lymphatic vessels, nerves, skin appendages, and other cellular components. The dermal matrix is made up of hydrophilic compounds composed of proteins and polysaccharides known as proteoglycans, such as hyaluronic acid, sulfur chondroitin, and so on. It is packed in the spaces between collagen fibers and fiber bundles and cells. The cutaneous immune reaction mainly occurs in the dermis. Mast cells, macrophages, and dendritic cells in the superficial dermis interact and regulate each other through the production of cytokines. This plays an important role in the activation, migration, proliferation, and differentiation of immune cells, the induction of immune response, inflammatory damage, and wound repair (28,29). When bacteria invade, inflammation and hypersensitivity can occur.

In this study, autologous adipose tissues were heated at 56 °C for 30 minutes to inactivate the complement. This heat treatment also possibly inactivated any Mycoplasma in the serum.

One of the major limitations of this study was that this study only assessed the cosmetic effects and histopathologic changes on the 30th day after implantation; thus, no information regarding late adipose tissue absorption and maintenance effects were gathered. Additionally, to evaluate the cosmetic effects better, we recommend the combination of various methods before analysis. Furthermore, the mechanism of inactivated autologous adipose tissues with a dermal outer capsule in vivo should also be explored further.

This experiment study indicated that the prosthesis produced by inactivated autologous subcutaneous adipose tissues with a dermal outer capsule may be an ideal prosthesis for breast reconstruction. Validation of this new prosthesis requires more experiments to assess the long-term cosmetic effects and histopathologic changes.

Reporting Checklist: The authors have completed the ARRIVE reporting checklist. Available at http://dx.doi.org/10.21037/tcr-19-2844

Conflicts of Interest: All authors have completed the ICMJE uniform disclosure form (available at http://dx.doi.org/10.21037/tcr-19-2844). The authors have no conflicts of interest to declare.

Ethical Statement: The authors are accountable for all aspects of the work in ensuring that questions related to the accuracy or integrity of any part of the work are appropriately investigated and resolved. The study was approved by the Ethics Committee of Zhejiang Cancer Hospital (No 2018-186). All animal tests were performed in strict accordance with the recommendations in the Guide for the Care and Use of Laboratory Animals by the National Institutes of Health and efforts were conducted to minimize the number of animals used and any discomfort experienced.