General anesthesia refers to the temporary inhibition of central nervous system when anesthetics are inhaled into the body through respiratory tract, intravenous or intramuscular injection. The clinical manifestations are loss of consciousness, loss of general pain, forgetting, reflex inhibition and skeletal muscle relaxation. The degree of inhibition of central nervous system is related to the concentration of drugs in the blood, and can be controlled and regulated. The general anesthesia methods commonly used in clinic are inhalation anesthesia, intravenous anesthesia and combined anesthesia.

The study was conducted in a single center. This prospective, observational study was conducted between January 2016 and December 2018 in the Chui Yangliu Hospital, Tsinghua University. A total of 78 patients with well-controlled medical conditions [American Society of Anesthesiologists (ASA) physical status I-II] who underwent laparotomy, gastrointestinal surgery and pelvic operation elective general anesthesia were recruited. They aged 26–62 years’ old. Patients with body mass index (BMI) of 23–30 kg/m2 were included without gender limitation. Those patients with upper respiratory infections, hypertension, heart disease, diabetes, or organ dysfunctions including liver and kidney were excluded. They were randomly divided into injecting group (test group, n=36) and non-injecting group (control group, n=36).

The study was conducted in accordance with the Declaration of Helsinki (as revised in 2013). The study was approved by institutional/regional/national ethics/committee/ethics board of Chui Yangliu Hospital, Tsinghua University (No.: 20170305) and informed consent was taken from all the patients.

The “medicine-injecting endotracheal tube between supraglottic and subglottic area” was used in our study (Figure 1, hereinafter referred as injecting endotracheal tube). The characteristic of this tube was that there were two thin tubes inside the wall (similar to the tubes for injecting air into airbags). Its proximal end was for injecting medicine. The distal end connected two small injection sacs on the tube wall. One was 1 cm from the airbag (white), and the other was 5 cm from the airbag (blue) with 4 cm in the middle. Each inject sac had four spray pores at different direction. Topical anesthetic reached sacs through medicine-injecting endotracheal tube and was evenly sprayed on the surrounding tissues to exert topical anesthesia effect. While performing tracheal intubation, the two sacs were right at supraglottic and subglottic area, namely endotracheal and laryngopharynx. The blue sac was the supraglottic/laryngopharynx injection sac, which was also an indication for the depth of intubation. 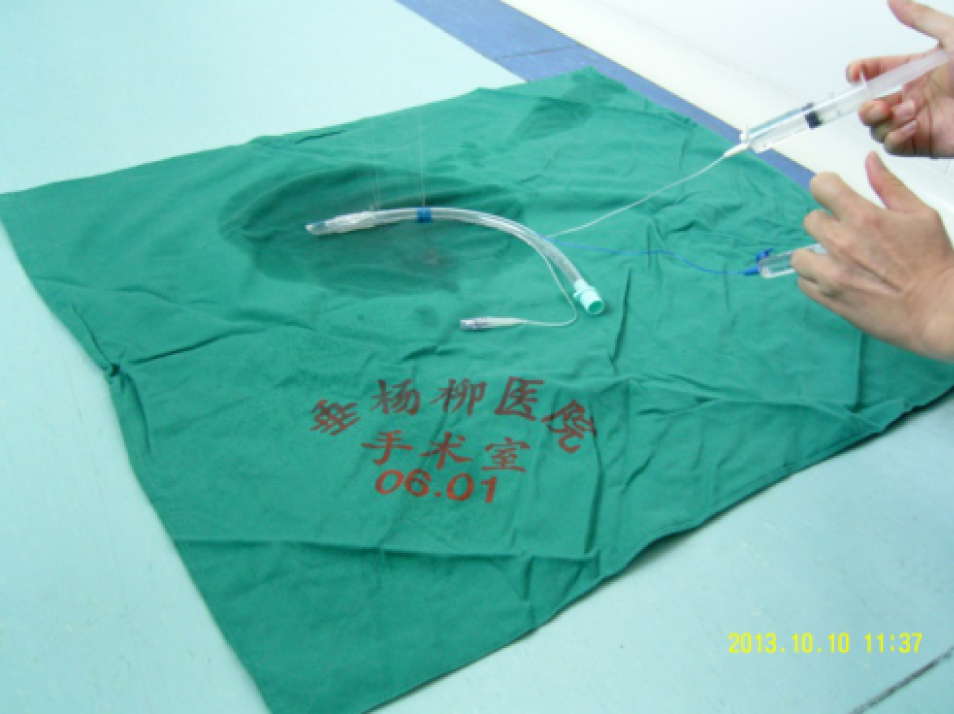 After being admitted into the operation room (OR), the patients were injected by 8 mL/kg of sodium lactate ringer’s injection through venous route and connected to BeneView T8. Systolic blood pressure (SBP), diastolic blood pressure (DBP), mean arterial pressure (MAP) and heart rate (HR) were monitored by radial arterial connection. Rapid sequence induction for anesthesia was performed with intravenous injection of Midazolam 0.04 mg/kg, Cisatracurium 0.25 mg/kg, Sufentanil 0.2 µg/kg and Propofol 2 mg/kg. Then, respiration was manually controlled for 150 s. Tracheal intubation was performed through visible laryngoscope exposure via mouth (7.5–8.0 ID). The patients in test group were injected 1.5 mL of 1% Tetracaine (0.5 mL for laryngopharynx and 1 mL for endotracheal) by assistant through a supraglottic tube and a subglottic tube. The patients in control group was not injected. Tracheal tube was then fixed and Darger Primus connected for ventilation. Tidal volume was 8–10 mL/kg. Frequency was 10–12 times/min. Inhalation vs. exhalation was 1 vs. 1.5. Stable oxygen flow rate was 1.5 L/min. PET CO2 was 30–35 mmHg. In addition, the patients in test group were injected with Tetracaine for topical anesthesia at an interval of 1 h and the patients in control group were not injected.

Inhalation of small dose of Sevoflurane (≤0.8 Vol%) was used, and Propofol 4–6 mg/(kg·h), Sufentanil 0.1–0.2 µk/(kg·h) and Cisatracurium was injected intravenously via close-loop target-controlled infusion [Veryark, maintaining TOF at 0% and automatically giving drug when stimulation count showed a (T1)] to maintain 45–60 of bispectral index (BIS) and variations of BP and HR lower 30% of base value. Six percent Hetastarch (200/0.5) and sodium lactate ringer’s injection were intraoperatively used to maintain blood volume. Blood transfusion was performed when Hb was lower than 7% and the volume of urine was maintained above 1 mL/(kg.h). Sevoflurane was stopped on 30 min, and Propofol, Sufentanil and Cisatracurium were stopped 15 min prior to the end of surgery. Fresh gas (oxygen) flow was stable and no other methods were adopted to accelerate or decelerate the wash-out of sevoflurane. Regular intravenous injection of Atropine 0.5 mg, Neostigmine 1 mg and Flumazenil 1 mg were as antagonist.

The patients admitted to OR staying calm and stable. At T0 (base value before anesthesia), T1 (before incision), T2 (during operation 15 min), T3 (60 min), T4 (90 min), T5 (120 min) and T6 (the end of operation). SBP, DBP, MAP and HR were recorded. 2.5 mL of radial artery blood was collected and stored in a test tube (EDTA anticoagulation) at −25 °C. The concentration of epinephrine (E), norepinephrine (NE) and cortisone (Cor) in the two groups were collectively observed in 3 months by using ELISA method at the pathology and physiology lab of the Institute of Basic Medical Sciences of the Chinese Academy of Medical Sciences.

Dosage of drugs used for general anesthesia was calculated after the operation. Calculation of the inhaled anesthetics: several data of open reading value (Drager-Vapor 2000 Vol%) × time the reading value lasted (min) (4). It was the total inhaled anesthetics for each patient. The fresh gas (oxygen) flow rate was stable at 1.5 L/min and the waste gas analyzed by sampling escaped the breathing circle. Postoperative follow-up was carried out to inquire the patients whether they experienced adverse effects including intraoperative awareness, postoperative uneasiness in the throat and aspiration of vomit.

Clinical characteristics of the patients

All patients met the criteria and were included in our study. There was no withdrawal or dropout. The clinical characteristics were summarized in Table 1. We found that there was no significant difference in age, BMI, operative time, blood loss volume, infusion, RCS infusion and urine volume between the two group (P>0.05, Table 1). 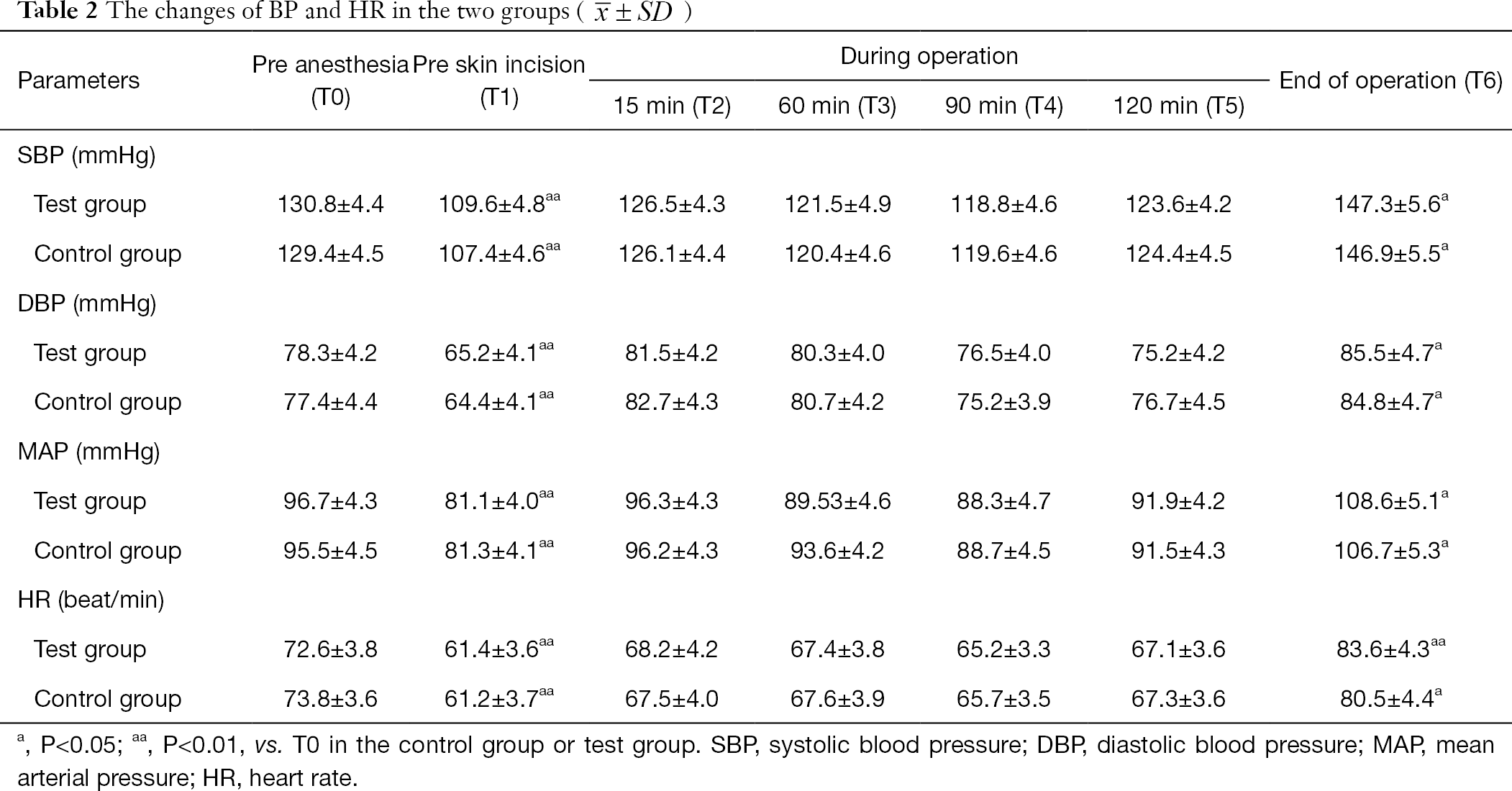 The changes of E, NE and Cor at each time points during the operation in the two groups

Table 3 The changes of E, NE and Cor of patients in the two groups ()
Full table

Adverse reactions during and after operation

According to postoperative follow-up, there were no adverse reactions of intra-operative awareness, hoarseness, choking or aspiration in patients in the two groups.

Deep anesthesia is associated with instability of vital signs during operation and increased postoperative long-term mortality rate (10). Especially in elderly patients, the maintained depth of anesthesia was advised with BIS changes from 40–55 to 45–60 (11). As muscle relaxants block the somatic nerve reflex during general anesthesia, patient is immobilized and the sympathetic nerve reflex activity is still present or even more obvious. For example, the endotracheal tube inserted into the trachea always stimulates the trachea, pharynx and larynx wall, especially in the surgery on the head, face, neck and chest, which are close to the airway and cause more airway friction (12,13). It prompts anesthesiologists to add anesthetics or non-anesthetics (e.g., α or β receptors’ blockers) to control stress response to maintain hemodynamic stability. The former is not conducive to postoperative recovery and long-term benefits, and the latter is palliatives and difficult to be mastered. Therefore, it is theoretically best to use a partial measure to eliminate catheter irritation. Chen et al. reported that the dosage of isoflurane in the EMLA (compound lidocaine cream, 2.5% lidocaine and 2.5% propitocaine) coated endotracheal tube in test group (30 cases) was 13% lower than that in control group (30 cases) (7). It is reported that the use of ENLA (same to Chen) decreased sufentanil requirements during extubation in thyroidectomy under general anesthesia (12). We recently reported that continuous endotracheal-laryngopharyngeal topical anesthesia decreased sevoflurane by 3.4%, propofol by 8.3% and sufentanil by 4.1% in patients undergoing general anesthesia (9). Although there was no significant statistical difference, each drug showed a decreasing trend. And the main reason for no significant statistical difference was that the number of cases was small (each group had 20 cases) and the operative site was far from the airway (lower limb surgery). Therefore, this study has expanded the number of cases and is not limited to lower limb surgery, which makes the experimental design more reasonable.

At present, BIS, blood pressure and heart rate are still dominant in judging the depth of anesthesia and the degree of stress reaction (11,14), and catecholamine in plasma can be determined if possible. In this study, BIS, blood pressure and heart rate stability were used as targeted anesthesia to maintain blood pressure and heart rate in two groups with similar levels of epinephrine, norepinephrine and cortisol in blood. No case was conscious during the surgery according to postoperative follow-up, which indicated that the depth of anesthesia and stress response were properly controlled in both groups. Sevoflurane, Propofol, Sufentanil and Cisatracurium were respectively decreased by 12.3%, 12.7%, 14.5% and 4.9% in test group under continuous endotracheal-laryngopharyngeal topical anesthesia than those in control group. We understood that topical anesthesia inhibited the endotracheal and laryngopharynx stimulus response of the catheter reducing the drug usage. This was similar to what Chen reported (7), which used lidocaine cream (EMLA) to coat the surface of the catheter to reduce the irritation effect of the catheter on the airway mucosa. However, their method was one-off so that the anesthesia effect was limited. Our results suggested that long-term topical anesthesia was suitable for long-term intubated general anesthesia surgery, especially for patients with catheter who can also continue to use it after sent to ICU.

At the end of operation, the value of BIS in test group was significantly higher than that in control group, which was the reason why the patients in test group recovered more quickly with less general anesthetic dosage. Combined with the effect of airway topical anesthesia on the quality of recovery during peri-extubation period (8,12,15), the hemodynamics in test group was more stable, less cough reaction, less restlessness of limbs, strong tolerance to catheter and command coordination, which greatly increased the safety of extubation and accelerated the patient to leave the OR.

To sum up, combined with the concept of compound anesthesia in enhanced recovery after surgery (ERAS) of modern surgery, continuous endotracheal-pharyngolaryngeal topical anesthesia was carried out with medicine-injecting tracheal catheter during the whole operation. The method is simple and feasible, which can stabilize the hemodynamics and reduce the dosage of general anesthetics, and is conducive to patients’ smooth recovery and leave the operating room faster. The method is worth promoting. However, it is need to be further studied about the pharmacokinetics and pharmacodynamics of topical anesthetics after absorption and the possible toxic effects after prolonged use.

Funding: This study was approved by the financial support from Beijing Capital Research Foundation of Medical Developments (No. 2009-3215).

Conflicts of Interest: All authors have completed the ICMJE uniform disclosure form (available at http://dx.doi.org/10.21037/tcr-20-169). The authors have no conflicts of interest to declare.

Ethical Statement: The authors are accountable for all aspects of the work in ensuring that questions related to the accuracy or integrity of any part of the work are appropriately investigated and resolved. The study was conducted in accordance with the Declaration of Helsinki (as revised in 2013). The study was approved by institutional/regional/national ethics/committee/ethics board of Chui Yangliu Hospital, Tsinghua University (No.: 20170305) and informed consent was taken from all the patients.