Novel poly-β-cyclodextrin derivatives as advanced carriers for 5-fluorouracil for tumor: the impact of charge on antitumor efficiency

Cancer is regarded as one of the main problems threatening the health of humanity. The percentage of the reported patient numbers was expected to be increased by 75% by the next two decades (1). Liver cancer is the most obstinate malignant tumors. This enlightened researchers on developing low cost, efficient, and safe therapies for cancer or taking advantage of new technologies to improve the potential of the currently used drugs (2). 5-fluorouracil (5-FU), commonly used anticancer drug, has an efficient effect on active cancers (3). However, 5-FU drugs can not only kill the cancer cells but also affect the normal cells, causing several negative impacts in the course of treatment (4). Furthermore, an overdose of 5-FU can result in impair the hematological, neural, cardiac, gastrointestinal tract as well as the dermatological reactions (1). Thus, it was a requisite for developing a novel carrier to control the drug release in the specific lesion, and minimize its side effect as far as possible (5). To achieve this goal, numerous materials, such as bentonite, biodegradable polymers, chitosan, alginate, and cellulose, etc., were inspected and evaluated (6). Polymeric nano-carriers which were biocompatible, nontoxic, and stable in the biological systems were promising drug carriers with high encapsulation and controlled release properties (7).

It was demonstrated that the gap of tumor vascular endothelial cells is 380–780 nm (21). This abnormal permeability of tumor vessels makes the permeability of macromolecular and nanoparticles increase and lymphatic clearance reduce. However, there is no difference in the distribution of small molecule drugs between tumor tissues and normal tissues. The difference of permeability between tumor tissues and normal tissues makes macromolecule and nanoparticles aggregate in tumor tissue, which is called enhanced permeability and retention (EPR). EPR is the basis of tumor-targeting for nanoparticles (22). The cell membrane is composed of the phospholipid bilayer and the surfaces of the cell are negatively charged. Therefore, it was expected that the introduction of carboxymethyl or quaternary ammonium group to β-CD resulted in a novel β-CD derivatives, which can increase the solubility of 5-FU by facilitating its loading and enhance the potential of 5-FU for inhibiting the tumor cells by boosting the combination of β-CD inclusion compounds to tumor cell.

To prepare poly-GTAC-β-CD, 0.01 mole GTMAC and 0.01 mole poly-β-CD were mixed in a 50 mL round-bottom flask. On the hand, 0.01 mole bromoacetic acid and 0.01 mole poly-β-CD were mixed for poly-CM-β-CD. Ten milliliters DMSO was added into the mixture and stirred. To remove the DMS and residual small molecular compound, the dialysis membrane of Spectra/Por 1,500–2,000 Da was utilized. The resultant product was collected by lyophilization.

Both poly-GTAC-β-CD and poly-CM-β-CD structures were further confirmed by 1H NMR. The 1H NMR spectra were recorded in D2O on a Bruker AC 200P, 200 MHz spectrometer (Bruker Corporation, Rheinstetten, Germany), using tetramethylsilane as the internal standard.

The preparation of inclusion complexes

Four-gram poly-GTAC-β-CD and poly-CM-β-CD were respectively added into 10 mL DMSO and 1 g 5-FU in 50 mL round-bottom flask. The mixture was stirred with reflux at 80 °C for 72 h. The DMSO and residual small molecular compound were removed by dialysis for 72 hours using the dialysis membrane of Spectra/Por 1,500–2,000 Da. The resultant product was collected by lyophilization.

The content of 5-FU in poly-GTAC-β-CD or poly-CM-β-CD was evaluated using fluorine element analysis. Briefly, a 100 mg sample was wrapped in ashless paper and placed in a 500 mL oxygen flask containing 5 mL absorbing liquid for combustion. Fluoride in the resultant absorbing liquid was separated using IonPac AS14-AG14 (Dionex, Sunnyvale, CA, USA) as a separating column and rinsing with a solution containing 0.001 M NaHCO3 and 0.0035 M Na2CO3. The electric conductivity was detected.

HepG2 cell lines were seeded in a 24-well plate at a density of 5.0×104 cell/mL and incubated overnight at 37 °C and 5% CO2 to attain subconfluence before treating with poly-CM-β-CD/poly-GTAC-β-CD at various concentrations. After two days post-incubation, cells in each well were exposed to 0.4 mL 2% crystal violet in 20% methanol for 30 min at room temperature and rinsed with distilled water in preparation for image analysis.

The potential of poly-CM-β-CD-5-FU/poly-GTAC-β-CD-5-FU inclusion compounds was evaluated using HepG2 cells and the 3-(4,5-dimethylthiazol-2-yl)-2,5-diphenyltetrazolium bromide (MTT) assay. HepG2 cells were seeded in 96-well plates at a density of 1×104 cells/well in 100 µL cell culture medium and incubated overnight to obtain 75–80% confluency. The culture medium was then replaced with fresh, serum free medium, and a serial sample of poly-CM-β-CD-5-FU/poly-GTAC-β-CD-5-FU inclusion compound was added to the cells. Cells were incubated with poly-CM-β-CD-5-FU/poly-GTAC-β-CD-5-FU inclusion compound at a 5-FU concentration of 5 µg/mL for the originally seeded cells at 37 °C. Then, cells were incubated for 24 h. A total of 10 µL MTT solution (25 µg/mL) was added to the 100 µL of culture medium in each well before incubation at 37 °C for 4 h. The MTT-containing medium was replaced with 100 µL solubilization solution DMSO. Finally, the absorbance was measured at 595 nm using an ELISA plate reader (Thermo Fisher, Waltham, MA, USA) with a reference filter of 650 nm. The viability of non-treated control cells was arbitrarily defined as 100%. The experiment was repeated four times for each sample treatment. Cell viability (%) was calculated according to the following Eq. [1]:

All experiments were repeated four times and measurements were collected in quadruplicate. Data are expressed as the mean ± standard deviation based on four measurements. Statistical analysis was performed using Student’s t-test. P<0.005 was considered to indicate a statistically significant difference.

Figure 1 The 1H-NMR spectra of poly-GTAC-β-CD.

Figure 2 The 1H-NMR spectra of poly-CM-β-CD. 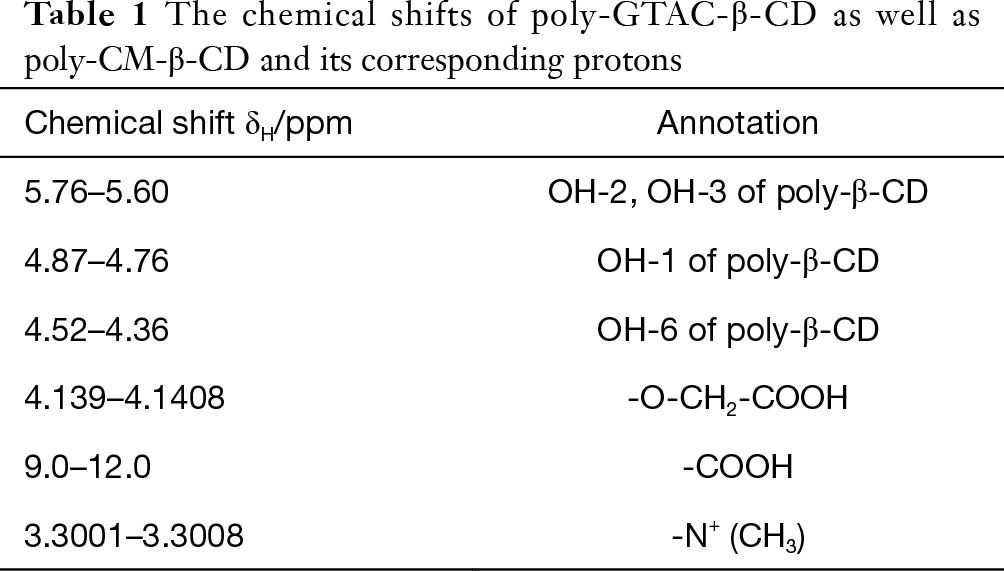 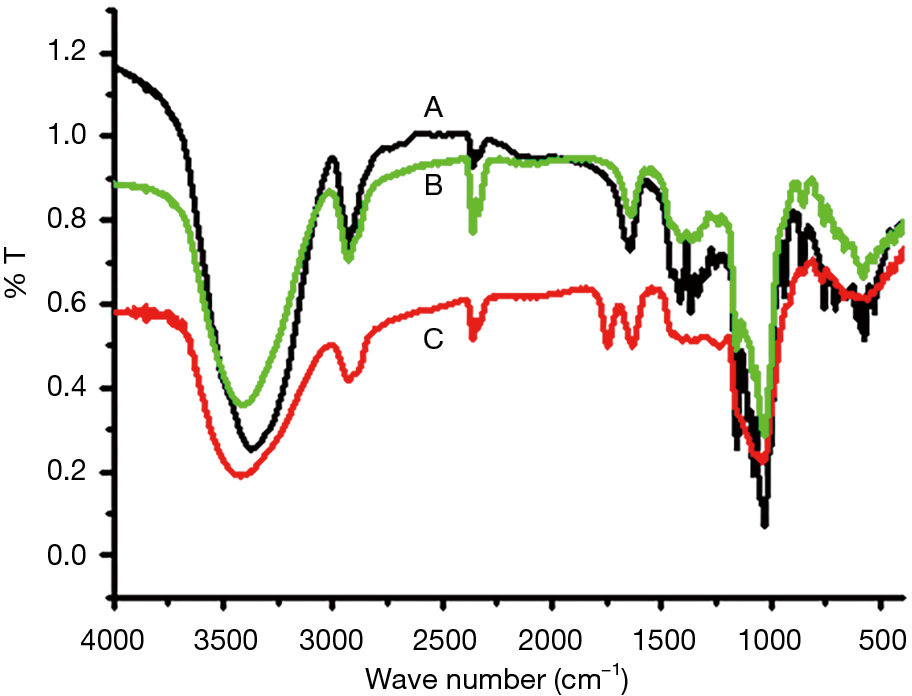 To determine the percentage of 5-FU loaded in poly-GTAC-β-CD/poy-CM-β-CD, the fluorine element analysis was conducted following freeze-drying of the conjugate. The result indicated that the content of 5-FU in 1 g poly-β-CD, poly-GTAC-β-CD, and poly-CM-β-CD was 1,214, 921 and 1,187 µg, respectively. 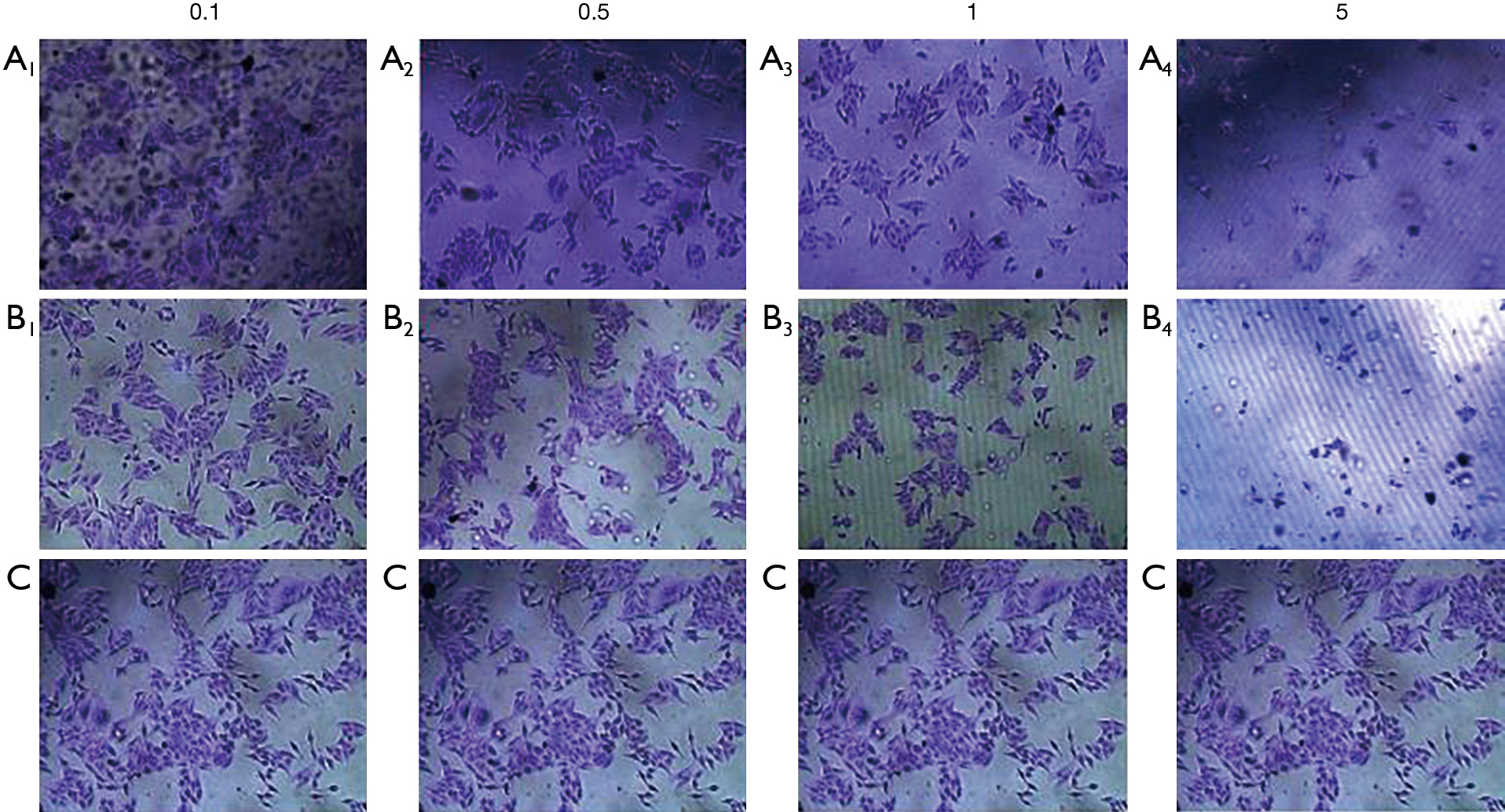 The preparation route for poly-GTAC-β-CD is shown in the schematic diagram of Figure 5.

Figure 5 The preparation route and schematic diagram of poly-GTAC-β-CD.

There was an ethylene oxide structural unit in GTMAC. Because of the large tension of the ternary ring, GTMAC was in high chemical activity, which can react with hydroxyl groups on poly-β-CD. There were primary hydroxyl and secondary hydroxyl groups in poly-β-CD but the chemical activity of primary hydroxyl was larger than that of secondary hydroxyl. Therefore, the groups of poly-β-CD which reacted with GTMAC were mainly primary hydroxyl. The ring-opening reaction between hydroxyl and ethylene oxide can be regarded as a special nucleophilic substitution reaction. GTMAC was soluble in H2O and DMSO. However, poly-β-CD was poorly soluble in water and well soluble in DMSO. Both GTMAC and poly-β-CD were polar compounds and the polar aprotic solvent is favorable for nucleophilic substitution reaction. Therefore, DMSO was used as a solvent in this reaction.

The preparation route for poly-CM-β-CD is shown in the schematic diagram of Figure 6. The reaction of hydroxyl with dibromoacetic acid was belonging to the nucleophilic substitution reaction. Bromoacetic acid was well soluble in H2O or DMSO. But poly-β-CD was insoluble in H2O instead. Furthermore, due to hydrogen bonding, water molecules can form a hydration shell around the hydroxyl group on poly-β-CD, blocking the substitution reaction of hydroxyl with bromoacetic acid. Because the polar characteristic of GTMAC and poly-β-CD was observed, DMSO was utilized as a solvent in this reaction.

Figure 6 The preparation route and schematic diagram of poly-CM-β-CD.

Figure 7 is a schematic diagram for the principle of inclusion compound. The lipophilic cavity of cyclodextrin molecules provided a microenvironment into which appropriately sized non-polar 5-FU can enter and form β-CD-5-FU inclusion complexes (25). The hydrophobic drug 5-FU could induce the β-CD conjugates to self-assemble and form nanoparticles (26). The main driving force for the formation of β-CD-5-FU inclusion complex was the release of enthalpy-rich water molecules from the hydrophobic cavity. Water molecules were displaced by the highly hydrophobic 5-FU molecules presenting in the solution to attain an apolar-apolar association and decrease of cyclodextrin ring strain, resulting in a stable lower energy state (27). Water was the most commonly used solvent in which complexation reactions were performed. The more soluble β-CD existed in the solvent, the more molecules became available for complexation. poly-CM-β-CD and poly-GTAC-β-CD are well soluble in water but 5-FU is poorly soluble. However, poly-CM-β-CD, poly-GTAC-β-CD and 5-FU are all well soluble in DMSO. Therefore, DMSO was used as a solvent in this reaction to improve the formation of inclusion host-guest complexes.

Figure 7 The schematic diagram for the formation of cyclodextrin-5-FU inclusion compound.

Cytotoxicity and uptake by tumor cells

Significant difference in cytotoxicity among poly-β-CD-5-FU, poly-GTAC-β-CD-5-FU and poly-CM-β-CD inclusion compound was observed in Figure 8. These results may be attributed to the involvement of charge in HepG2 cellular association and endocytosis of inclusion compounds. Zelepukin et al. reported that the effect of charge was a crucial factor when testing over eight NP formulations with different surface characteristics (28). The cell membrane is composed of the phospholipid bilayer with the negative charge on its surface. Thus, poly-β-CD-5-FU can be swallowed by HepG2 cells through the weak electrostatic attraction hydrogen bond between hydroxyl and the negative charge on the cell membrane surface. The quaternary ammonium groups on poly-GTAC-β-CD-5-FU were positively charged (Zeta potential +40.3 mV), which can form a strong electrostatic attraction with the negative charged on the HepG2 membrane. Consequently, poly-GTAC-β-CD-5-FU was more easily swallowed by HepG2 cells. However, the large steric hindrance of the quaternary ammonium group blocked the endocytosis of poly-GTAC-β-CD-5-FU. Therefore, the killing effect of poly-β-CD-5-FU on HePG2 was similar to that of poly-GTAC-β-CD-5-FU. For poly-CM-β-CD-5-FU, the dissociated carboxyl was negatively charged (Zeta potential −56.3 mV), which can form electrostatic repulsion force with the negative charge on the HepG2 membrane surface. This made poly-CM-β-CD-5-FU difficult to approach cells and block the endocytosis of poly-CM-β-CD. Hence, poly-CM-β-CD-5-FU had the worst killing effect on HePG2 cells. These results were consistent with the result reported by Frohlich (29). Charge is a key determinant of cellular localization, where highly positively charged NPs tend to show higher cellular uptake compared to negatively charged particles. It is worth pointing out that this high rate of accumulation also leads to increased non-specific binding to normal cells, and to cytotoxicity combined with a short half-life. In contrast, negatively charged NPs have very limited uptake in cells (29). 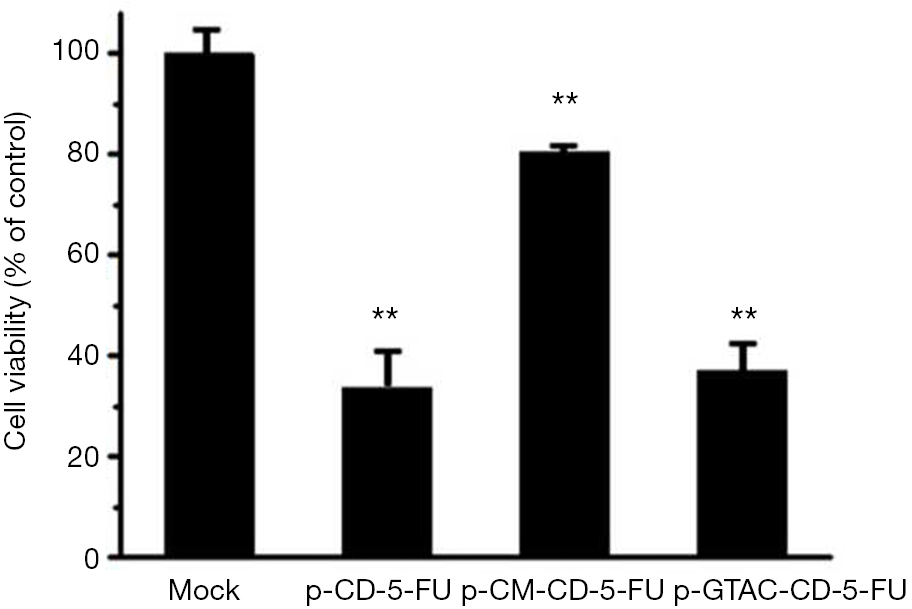 Funding: Supported by grants from the Natural Science Foundation of Xiamen Medical College (K2017-04 and K2016-35) the open grants of engineering research center, ministry of education of molecular medicine. The funders had no role in the study design, data collection and analysis, decision to publish, or preparation of the manuscript.

Conflicts of Interest: All authors have completed the ICMJE uniform disclosure form (available at http://dx.doi.org/10.21037/tcr-20-1118). The authors have no conflicts of interest to declare.