Synergistic effects of histologic subtype, T-stage, and M-stage in the prognosis of differentiated thyroid cancer: a retrospective observational study

The incidence of thyroid cancer, the most common malignant tumor of the endocrine system, has increased considerably among both men and women in many countries during the past few decades (1-3). Globally, 567,000 people suffer from thyroid cancer, making it the ninth most frequently diagnosed cancer (1).

Differentiated thyroid cancer (DTC) comprises over 85% of all thyroid cancers (4), and is seen with increasing incidence in clinical practice (5). Several studies have confirmed the increasing incidence of differentiated thyroid cancer in the USA, Europe, Canada, Brazil, Australia and Saudi Arabia (6). DTC originates from epithelial follicular cell and includes two histological types, namely, papillary thyroid carcinoma (PTC) and follicular thyroid carcinoma (FTC). PTC and FTC account for approximately 80–85% and 10–15%, respectively, of all thyroid malignancies (7,8). Despite the rising incidence, DTC bears an excellent prognosis with 10-year overall survival (OS) rates for patients with PTC and FTC of 93% and 85%, respectively (9).

The etiology and pathogenesis of thyroid cancer remain unclear. Many previous studies have identified various clinicopathological predictors of DTC and designed risk component stratification or staging systems. Several clinical factors, which are considered to be prognostically significant, are included in these systems (10). However, the synergistic effects of the different clinicopathological risk factors have not been evaluated. In this study, we analyzed the synergistic effects of three common clinicopathological characteristics (histologic subtype, T stage, and M stage) to determine their relationship to prognosis in patients with DTC. We present the following article in accordance with the STROBE reporting checklist (available at http://dx.doi.org/10.21037/tcr-20-359).

The population-based data for this study were extracted from the SEER database established by the National Cancer Institute. Data from patients in the SEER database with a diagnosis of DTC from 2004 to 2013 were included. The research was conducted in accordance with the Declaration of Helsinki (as revised in 2013). Since SEER is a publicly available database with anonymized data, and our study is a retrospective study, no ethical review and informed consent were required.

We put no restriction on age or race. The exclusion criteria were as follows: patients diagnosed with DTC at death or autopsy; primary malignant tumors in other organs; benign or borderline tumors; unknown age, cause of death, or survival time; unavailable or incomplete information on surgery or radiation therapy; and inactive follow-up. Finally, 86,032 patients were included (Figure 1). 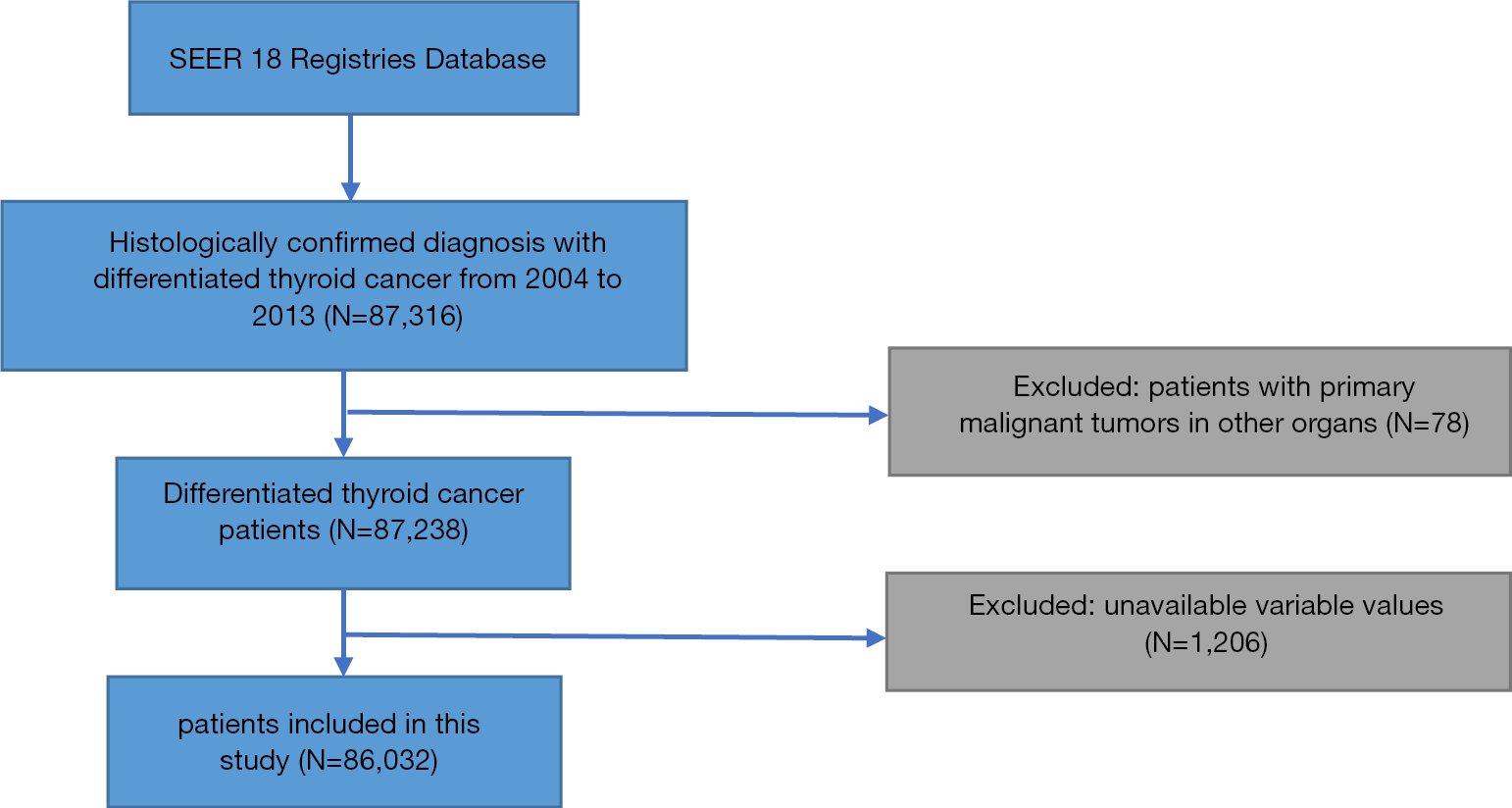 Univariate and multivariate analyses were performed, respectively, using the Chi squared test and binary logistic regression to explore factors associated with prognosis. In order to evaluate the effects of different histologic subtypes, T stage, and M stage on cancer-specific mortality (CSM) and all-cause mortality (ACM), we used Cox proportional hazard regression analysis to estimate the hazard ratio (HR) and 95% confidence interval (CI). The relative excess risk (RERI), attributable proportion (AP), and synergy index (SI) were utilized to assess the interactive effect of these factors on prognosis in DTC patients. When there is no additive synergistic effect, the 95% CIs of RERI and AP include 0, and the SI includes 1 (11). In other words, a result of RERI >0, AP >0, or S >1 is considered as verifying the existence of a synergistic effect. The Kaplan-Meier method was used to draw survival curves, with log-rank test to determine statistical differences across groups.

General characteristics of the study population

CSM and ACM rates per 1,000 person-years 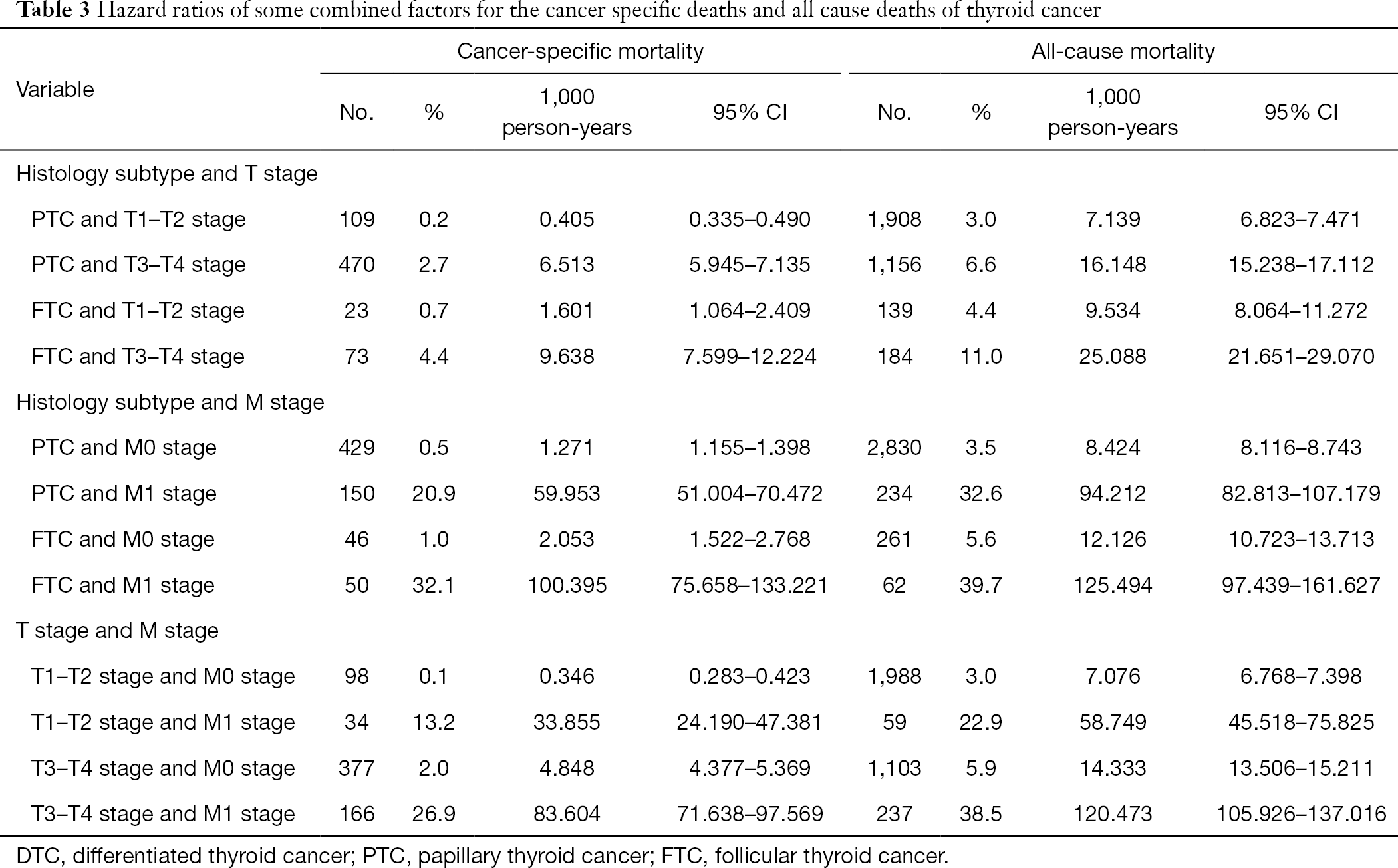 Risk factors for cancer-specific and ACM 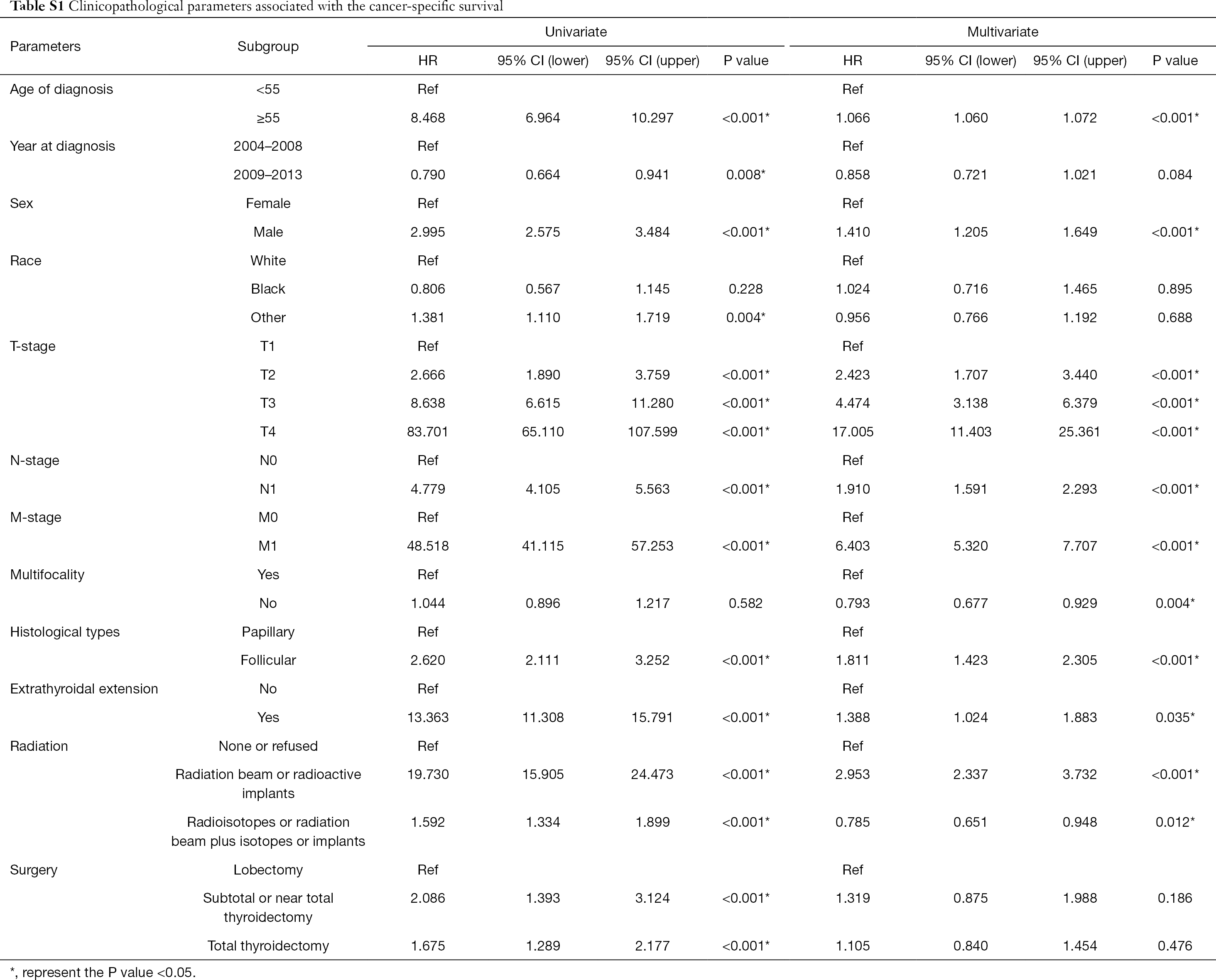 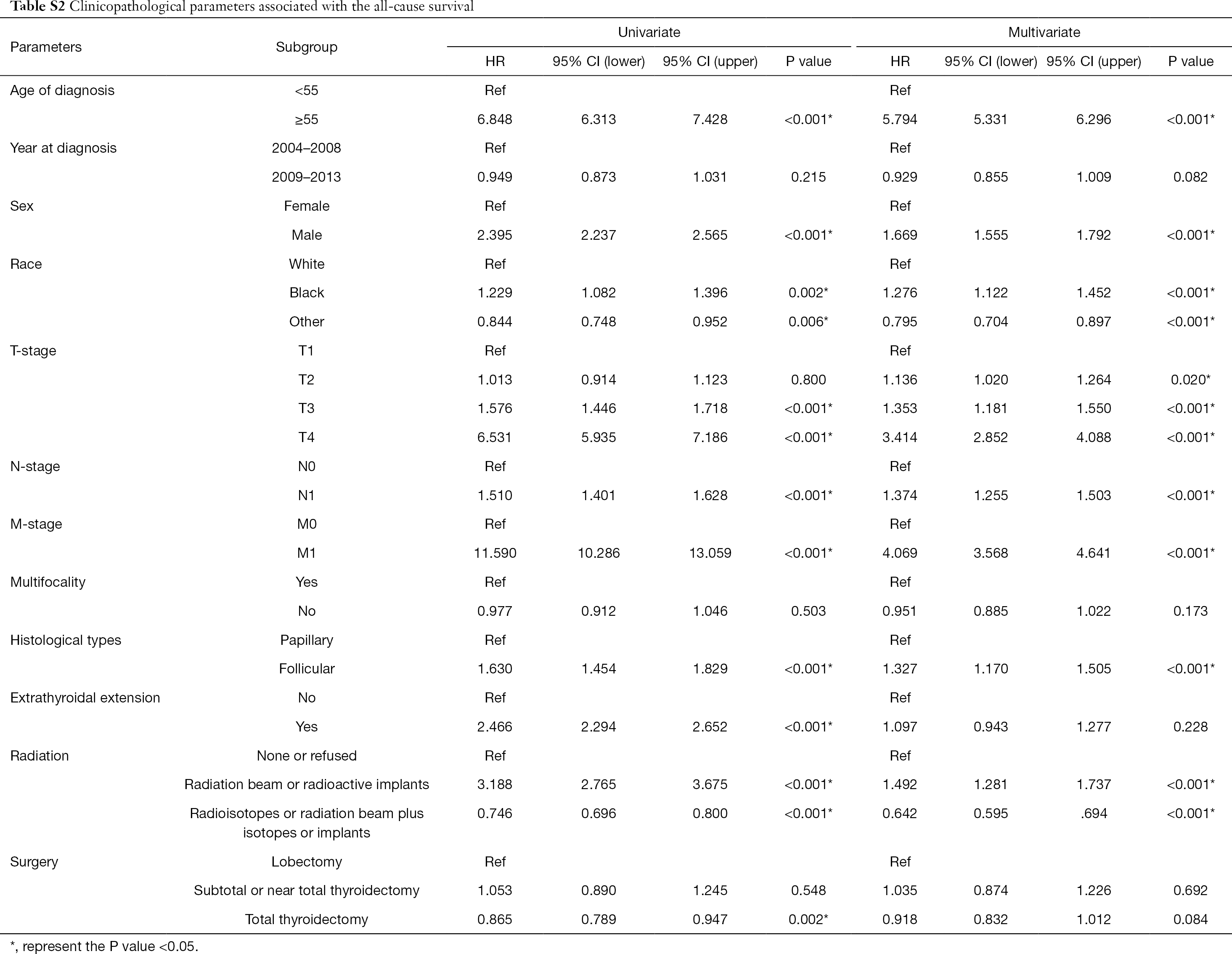 Synergic effects of T stage, LNM, and DM on the prognosis of DTC

Kaplan-Meier analysis for survival in DTCs

Kaplan-Meier survival analysis was performed for four groups divided by histologic subtype and T stage (Figure 2A). The cancer-specific survival curve of patients with T1–T2 PTC was relatively flat, and other groups were associated with a modest decline in the survival curve. By contrast, the curves for T3–T4 FTC and PTC showed a sharp decline when OS was analyzed (Figure 2B).

Similarly, according to the Kaplan-Meier analysis of four groups divided by histologic subtype and M stage, the cancer-specific survival curve and OS curve of M1 stage FTC and PTC showed a remarkable decline in survival as compared to those of M0 DTC patients (Figure 3A,B).

Histologic subtype, T stage, and M stage are reported to be risk factors for death in DTC patients (10,12-14). However, the synergistic effects of these clinicopathological risk factors have not been investigated. In this study, based on data from the SEER database, we extensively explored the value of prognosis of these three factors in patients with DTC, using univariate and multivariate analyses. We also showed that they are risk factors for CSM and ACM. Next, patients were divided into subgroups according to tumor subtype, T stage, and M stage. We found that within each subgroup, these factors had synergistic effects on the prognosis of DTC. The synergistic effects of histologic subtypes, T and M stage were evaluated by RERI, AP and SI. Based on our results, DTC patients with two out of the three factors (FTC, higher T stage, and metastatic disease) were associated with a higher risk of CSM compared to those who had one or none of the risk factors.

Previous reports have provided decisive information regarding whether FTC has more aggressive clinical features than PTC (15,16). Invasive clinical features, including distant metastasis, are usually associated with shorter cancer-specific survival. In the present study, FTC was associated with higher CSM and ACM rates than PTC. Although angioinvasion was not assessed, it has been reported that vascular invasion has no adverse influence on short-term outcomes or long-term prognosis in FTC or short-term outcomes in PTC (17).

The multi-stage system risk classification of DTC, including assessment of tumor size, is helpful to predict the risk of local recurrence, metastasis, and mortality in DTC patients (14). A previous report suggested that, for small thyroid nodules, a tumor size of 1.5 cm or larger is not associated with death from thyroid cancer (18). Nguyen et al. have suggested that the probability of distant metastasis of DTC tumors smaller than 4 cm (lower than T2 stage) is less than 3%, but large tumors (T4 stage) increased the ACM rate (19). In our study, the HRs for CSM of T2, T3, and T4 disease were all higher than that for T1 disease, indicating that the classification of tumor size as a risk stratification factor for the prognosis of thyroid cancer is reasonable. However, Cheema et al. suggested that the size of tumors was not related to the higher recurrence rate, and rather the presence of metastasis is a better predictor of recurrence and prognosis at the time of diagnosis (20). Distant metastasis is relatively rare in DTC; it was observed in only 1.0% of DTC patients in our study. Multiple metastases of thyroid cancer are associated with a high mortality rate, reaching 92% at 5 years, so early diagnosis and treatment are necessary (21).

Pathological classification of tumors requires accurate histopathological examination of the specimen after thyroidectomy and lymphadenectomy. T stage and M stage can be assessed by imaging, but ultimately need to be evaluated after surgery. However, they do have a significant impact on the therapeutic options, including surgery, radioactive iodine, and observation. Thyroidectomy is recommended in the following cases: FTC with extensive or vascular invasion, and PTC with tumor size >1 cm or with metastatic disease, irrespective of size (14). Adjuvant radioiodine therapy is considered the most effective treatment for non-resectable or incompletely resected DTC (14), or with distant metastasis (22). According to our results, patients with FTC, higher T stage, and M1 stage should be recommended for aggressive treatment.

Neri et al. reported on 191 cases of breast cancer and found multifocal breast cancer to be related to significantly worse prognosis with breast cancer–specific survival (23). In this study, the effect of “multifocality” on cancer-specific survival showed an opposite result between univariate and multivariate analysis. We consider that P>0.05 and HR =1.044 in univariate analysis indicating that the risk of cancer death is not significantly aggravated by single focus. So it is consistent with the results of multivariate analysis which shows that multifocality, not single focus, increased the risk of CSM. We also note that, in Figure 3, DTC with T1–T2 and M1 stage showed a worse cancer-specific survival and all-cause survival than those with T3–T4 and M1 stage. We consider it may be that the difference between the two curves is not statistically significant or that there are some confounding factors that influence the results.

The present study has some limitations. First, there may be selection bias, because this is a retrospective study. Second, the patients’ family history, vascular invasion status, accurate extension information, and other histological characteristics, which could minimize selection bias, were not taken into account. Finally, detailed data on complications and disease recurrence are not included in the SEER database, so we could not account for them in our analyses.

This large, comprehensive study, complemented by the SEER data analyses, provides conclusive evidence for the value of histological subtypes, T stage and M stage in the clinical prognosis of DTC. In conclusion, the different combinations of these three factors have synergic effects on the risk of mortality in DTC. This study is likely to have a widespread impact on the current clinical management of DTC.

Reporting Checklist: The authors have completed the STROBE reporting checklist. Available at http://dx.doi.org/10.21037/tcr-20-359

Conflicts of Interest: All authors have completed the ICMJE uniform disclosure form (available at http://dx.doi.org/10.21037/tcr-20-359). The authors have no conflicts of interest to declare.

Ethical Statement: The authors are accountable for all aspects of the work in ensuring that questions related to the accuracy or integrity of any part of the work are appropriately investigated and resolved. The research was conducted in accordance with the Declaration of Helsinki (as revised in 2013). Ethical approval was not required since SEER is a publicly available database with anonymized data.