Mesenteric fibromatosis, also known as desmoid tumor is myofibroblastic proliferation of the mesentery. The fibromatosis comprises a broad group of myofibroblastic proliferations. It is classified into deep-seated and superficial, and the former is also called desmoid tumor (1,2). Desmoid tumor is usually divided into abdominal, extra-abdominal or intra-abdominal according to the anatomical location. The most occurring locations of desmoid tumor are the extremities, the abdominal wall, and intra-abdominal or mesenteric (3) (Table 1). Desmoid tumor accounted for 0.03% of all tumors, and less than 3% of all soft tissue tumors (4). Mesenteric fibromatosis accounts for about 8% of all cases of desmoid tumor. It often manifests as a bump in the abdomen, pain or discomfort. However, due to its relationship to important structures and its ability to penetrate adjacent organs, it may cause important complications, including intestinal obstruction, ischemia, perforation, fistula, hydronephrosis, and even aortic rupture or hilar obstructive (5-7). Here we report a huge mesenteric fibromatosis presenting with acute diffuse peritonitis, and this is the first report to treat an emergent case of huge mesenteric fibromatosis. We present the following case in accordance with the CARE Reporting Checklist (available at http://dx.doi.org/10.21037/tcr-19-1151). 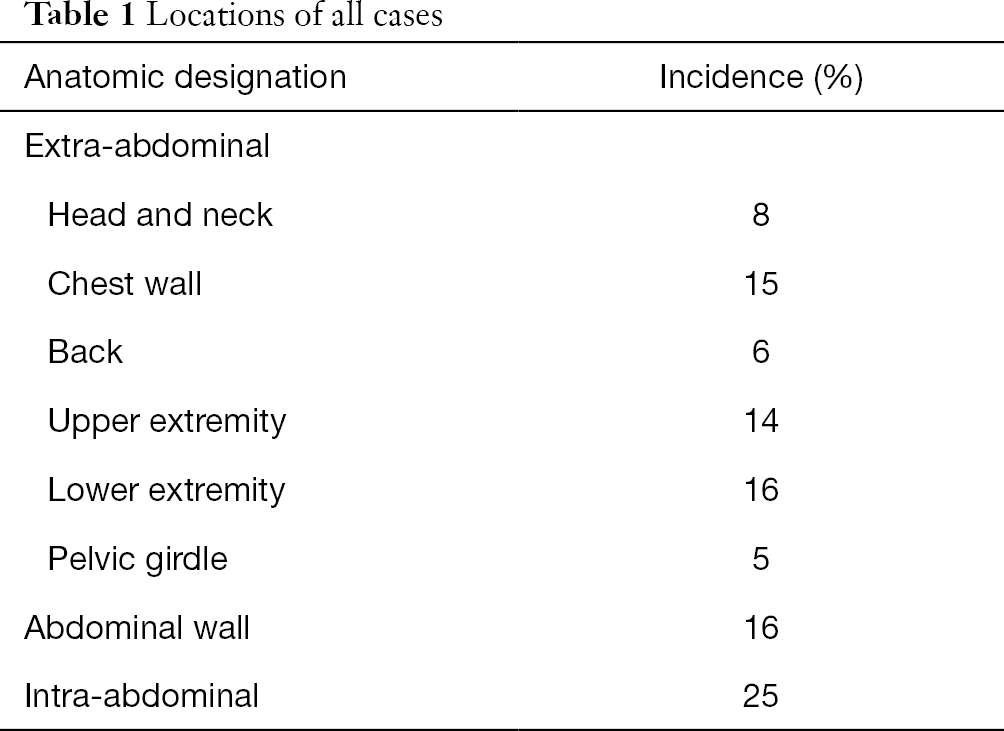 A 44-year-old Chinese man was admitted to our hospital because of an acute abdominal pain three hours ago. He complained a paroxysmal epigastric pain after breakfast, and then it became persistent and generalized followed by nausea. On admission, he had a fever of 38 °C. On physical examination, the whole abdomen was tender, especially in the upper quadrant. Further, a huge mass about 15 cm × 10 cm in size was palpated. He did not have any past history of emergent trauma or surgery. Laboratory test shown an increase in the percentage of neutrophils (94.6%, normal range, 50–70%) while the total white blood cell count was normal. Abdominal computed tomography (CT) scan showed pneumoperitoneum and ascites, suggesting there was hollow organ perforation. In addition, a homogeneous and hard mass sized 17 cm × 10 cm was found in the left abdomen (Figure 1). 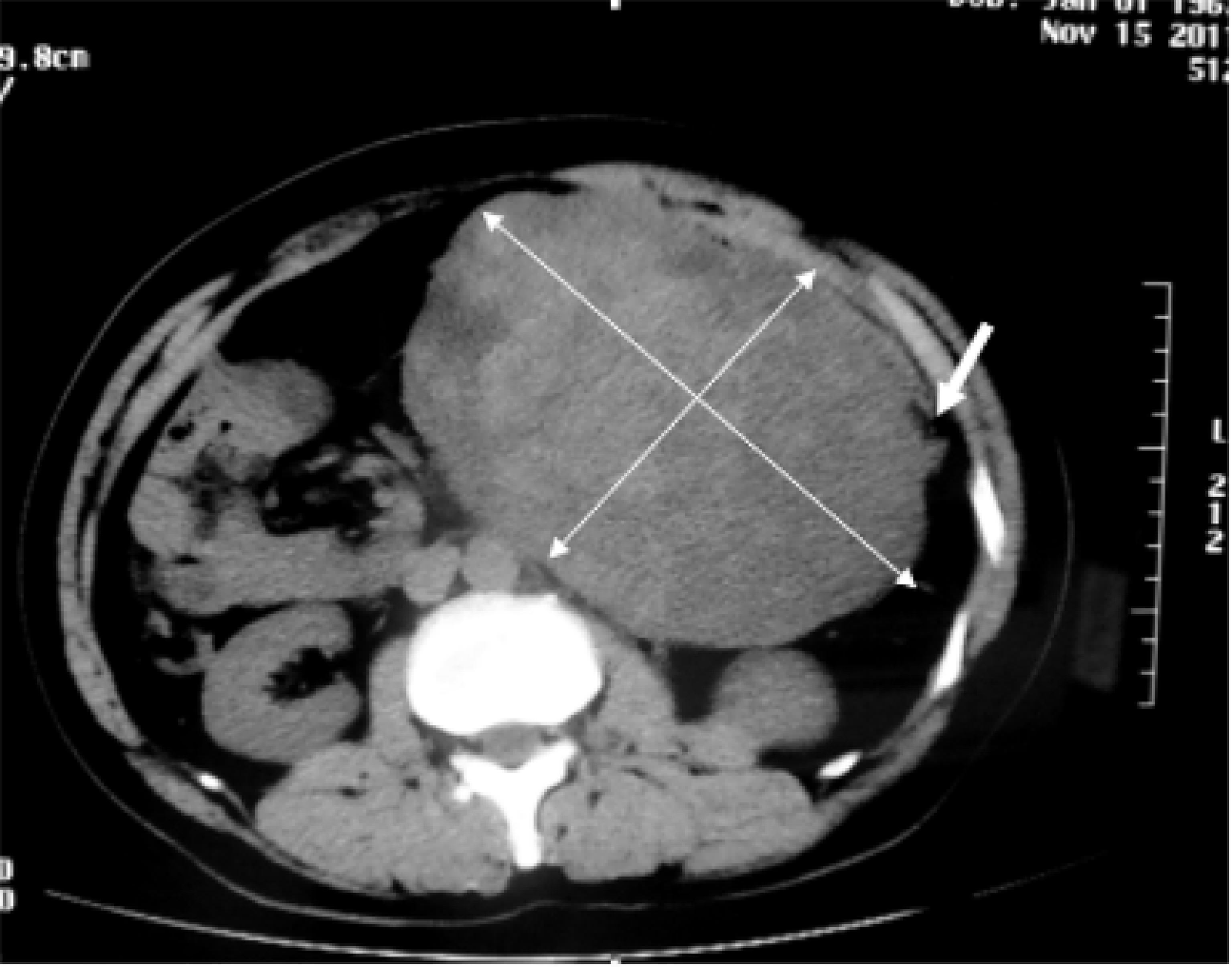 The patient underwent urgent laparotomy. A smooth and well-circumscribed lesion measuring about 17 cm × 10 cm × 10 cm was found at the mesenteric side of the jejunum (Figure 2). Further, there was a small perforation in the lesion and nearby jejunum, respectively (Figure 3). Initially, an intra-operative diagnosis of GIST was made. We resected the total lesion and partial jejunum. Histological examination showed many bundles of spindle-shaped cells (Figure 4). Immunohistochemistry showed that the tumor cells were negative for Bcl-2, CD117, CD34, CD99 and desmin, and partial positive for neuron-specific enolase (NSE), S-100 and smooth muscle actin (SMA), and strong positive for vimentin. However, the nuclear beta-catenin was negative. Based on the above results, the tumor was finally diagnosed as mesenteric fibromatosis. The post-operative course was uneventfully and the patient was discharged 2 weeks after surgery. With one-year follow-up, the patient had no recurrence (Figure 5). 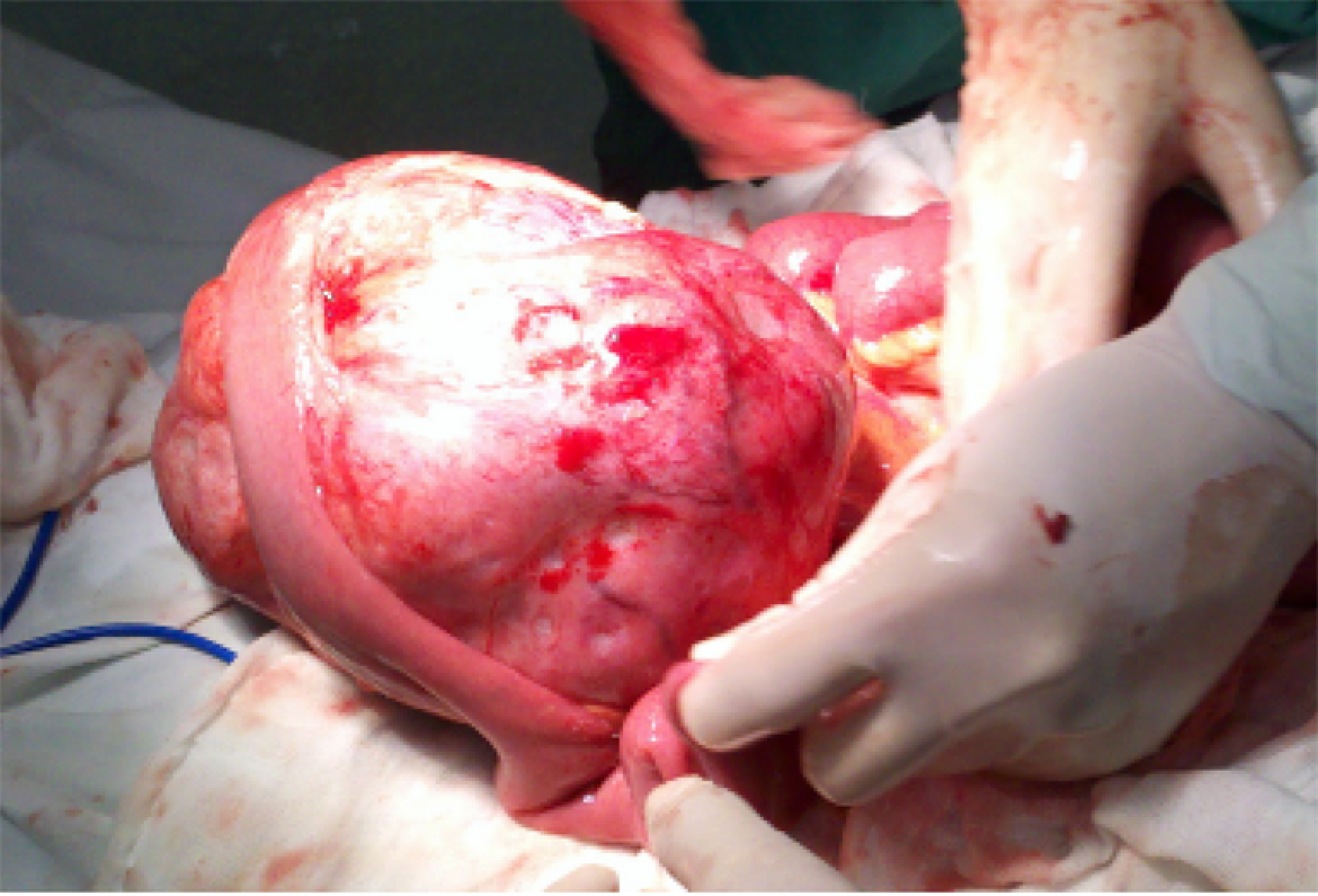 Figure 2 A well-circumscribed lesion with smooth external surface measuring about 17 cm × 10 cm × 10 cm was identified at the mesentery of the jejunum. 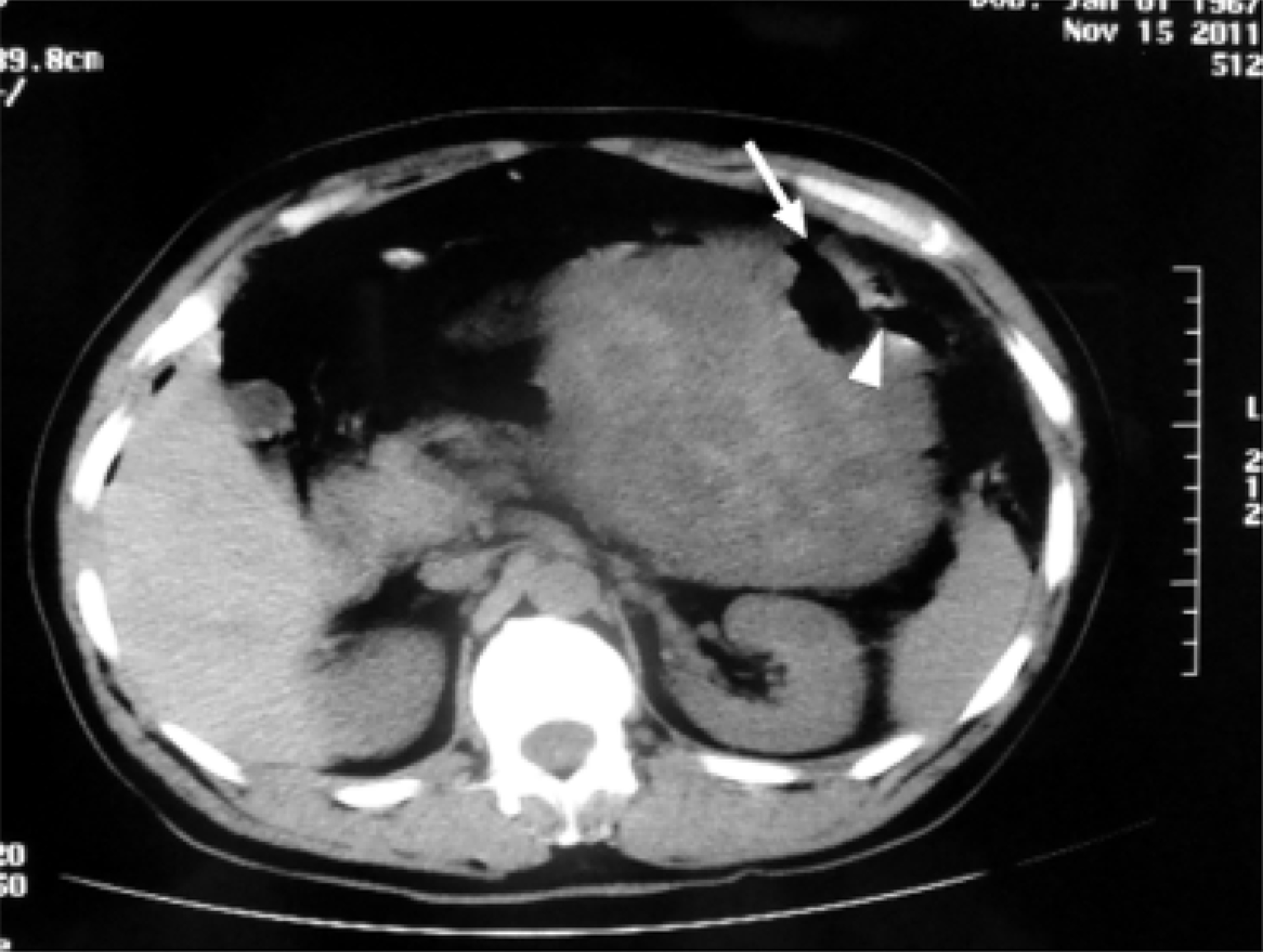 Figure 3 The tumor and the nearby jejunum both had perforations (arrow head), and then the gastrointestinal (GI) contents effused via the hole (arrow) causing acute diffuse peritonitis. 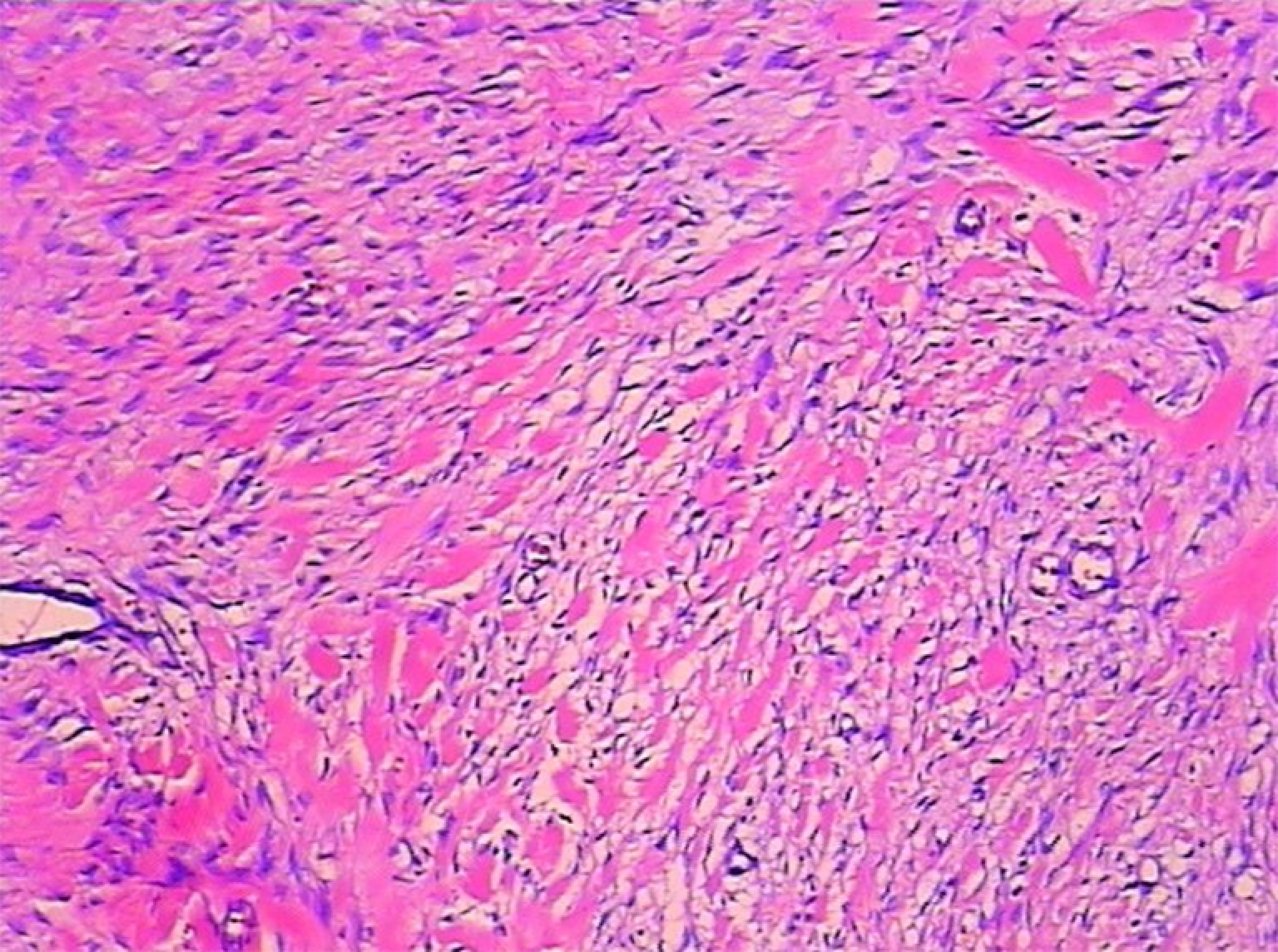 The study was conducted in accordance with the Declaration of Helsinki (as revised in 2013). The study was reviewed and approved by the Norther Jiangsu People’s Hospital Institutional Review Board. Informed written consent was obtained prior to study enrollment.

Mesenteric fibromatosis usually invades the mesentery of the small bowel. However, it can originate from retroperitoneum, omentum, ileocolic mesentery and gastrocolic ligament (12). It has a tendency to recur when it was excited incompletely or with Gardner’s syndrome, but rarely metastasize to other organs (13,14). Most of mesenteric fibromatosis present as insidious masses and sometimes infiltrate into adjacent structure asymptomatically (15). Approximately 16% of primary mesenteric fibromatosis were less than 5 cm, 28% were between 5 and 10 cm, and 50% were greater than 10 cm (16). Depending on its relationship to adjacent organs, serious complications might be caused, such as intestinal obstruction, perforation, ischemia, hydronephrosis, fistula, and even aortic rupture or infiltration of porta hepatis with obstructive jaundice (1-3).

Both MRI and CT are effective methods for pre-operative diagnosis. However, when the lesion involves the stomach or the intestine, it may appear to originate from these sites, and thereby mimic primary gastrointestinal tumor (GIST) (17). Generally mesenteric fibromatosis is easy to be confused with GIST (18). MRI has an advantage to monitor postoperative recurrence (19). In order to differentiate from Gardner’s syndrome, FAP or CD, colonoscopy is recommended.

Histology and IHC are useful methods to make definite diagnosis. The macroscopical appearance of desmoid tumor is a pale surface with poor vascularization (20). Microscopically spindle-shaped cells rich in cytoplasmic acidophilia were usually observed (21). IHC of desmoid tumor can be positive for the markers of vimentin, α-SMA, muscle actin, and desmin muscle cell. Besides loss-of-function mutations of APC, gain-of-function mutations of beta-catenin leading to nuclear beta-catenin immunoreactivity were also been described (22). IHC on hormone receptors show high positive rate of estrogen receptor (ER) beta receptor expression (89%) but no ER alpha (0%) (23).

In our case, we met an emergent case of huge mesenteric fibromatosis who complained a paroxysmal epigastric pain, and CT scan showed a huge mass in the left abdomen, as well as pneumoperitoneum and ascites. In an urgent laparotomy, we successfully resected the total lesion. Postoperative histology helped to differentiate it from GIST to mesenteric fibromatosis. In this emergent case, total resection and R0 margin is a key. However, due to its huge size, it was classified as high risk for recurrence, and a chemotherapy should be considered. Unfortunately, the patient rejected the chemotherapy. Although the patient had no recurrence one year after surgery, additional follow-up is needed.

Conflicts of Interest: All authors have completed the ICMJE uniform disclosure form (available at http://dx.doi.org/10.21037/tcr-19-1151). The authors have no conflicts of interest to declare.

Ethical Statement: The authors are accountable for all aspects of the work in ensuring that questions related to the accuracy or integrity of any part of the work are appropriately investigated and resolved. The study was conducted in accordance with the Declaration of Helsinki (as revised in 2013). The study was reviewed and approved by the Norther Jiangsu People’s Hospital Institutional Review Board. Informed written consent was obtained prior to study enrollment.