Postoperative ileus is a significant problem especially after open abdominal surgery via laparotomy and this has reduced since the introduction of laparoscopic surgery. Despite the advancement in laparoscopic surgery, paralytic ileus remains an issue in major complex gastrointestinal surgery due to long operative duration and considerable surgical trauma. The pathogenesis of post-operative ileus involves inhibitory neural reflexes and inflammatory mediators released from the site of injury. The varying degrees of inhibitory function of gastrointestinal motility after surgery may result in the symptoms of abdominal distension, nausea, vomiting, and even intestinal obstruction (1).

The recovery process of gastrointestinal function after surgery mainly includes intestinal paralysis, irregular peristalsis and return to normal motility. It is generally believed that recovery occurs in the first or second day for intestinal paralysis, second to third day for irregular peristalsis, and third to forth day for normal motility (2). The later the recovery of gastrointestinal function, the more severe the pathophysiological changes, such as intestinal effusion, water-electrolyte imbalance, and infection occur. Therefore, it is particularly important to restore the intestinal function of patients after surgery as soon as possible. At present, early oral feeding, ambulation, hot abdominal physiotherapy, anal enema, and Chinese medicine or treatment are commonly used clinically to help patients’ intestinal function recovery. In recent years, ultrasonic drug penetration therapy as a new type of non-invasive therapy has been used to solve this problem.

Ultrasound conductance drug penetration therapy (3) is a combination of laser micro-hole technology, ultrasonic transdermal technology, and iontophoresis technology that achieves targeted and fixed-rate precise target drug delivery technology (4,5), which process is simple, safe and non-invasive (6). According to Chinese medicine, DCQD can promote the secretion of Gastrokin, improve disorders of gastric electric rhythm after surgery, reduce the incidence of gastrointestinal motility, and promote the recovery of gastrointestinal motility (7). However, due to the bitter taste of DCQD, oral drinking has limited its clinical application. Therefore, the external form of DCQD as a patch has been developed and combined with the ultrasonic conductivity meter to penetrate the medicine through the abdominal wall; however, this method’s efficacy has not been confirmed.

Thus, a parallel randomized controlled clinical trial was designed to evaluate the effect of low frequency ultrasonic transdermal delivery system with DCQD in postoperative intestinal function recovery on patients after laparoscopic gastrointestinal surgery. We present the following article in accordance with the CONSORT reporting checklist (8) (available at http://dx.doi.org/10.21037/tcr-19-2671).

This single-center and parallel randomized controlled clinical trial took place in the Department of General Surgery of Guangdong Provincial People’s Hospital, Guangdong Academy of Medical Sciences in Guangzhou, China. Enrolment occurred between July 1, 2017, and December 31, 2017. This study was approved by the Ethics Committee of Guangdong Provincial People’s Hospital (No. GDRE2016429H) and was carried out in adherence with the Declaration of Helsinki (as revised in 2013). All patients involved in the study provided written informed consent.

Sample size estimation was performed according to the superiority trial design by PASS 11 software. According to the literature results, the postoperative flatus time was 53.6±10.7 and 62.9±11.4 h in the intervention group and the blank control group, respectively. We set the equal ratio k=1, the superiority boundary value Δ as four hours, type I error α=0.025 and type II error β=0.20; thus, it could be concluded that there were 60 patients in each group. With an expulsion rate of 20% and a specific expected rejection rate of 6%, 92 patients were enrolled in one group for the study. The data manager used SAS (Statistical Analysis System) to create the randomization sequence with a 1:1 allocation ratio. Two professional physician assistants were arranged to implement patient enrolment, treatment, data collection, and recording. Surgeons who performed the surgery were unaware of treatment allocation throughout the trial.

The primary outcome was defined as the time to first flatus by the patient’s subjective feeling after surgery. The secondary outcomes assessed the recovery time of bowel movement (by auscultation of bowel sounds once every 4 hours; if two consecutive results ≥4 times per minute; next, the bowel movement was determined to be recovered), time of the first defecation, postoperative gastrointestinal complications (e.g., nausea, vomit, and bloating), days of hospitalization and treatment costs. We evaluated vital signs, such as body temperature, pulse, and arterial blood pressure, and serum tests, including ALT, AST, CREA, and CRP, before surgery and at days one, three and five after surgery. Adverse events (AEs) and serious adverse events (SAE) were recorded in the Case Report Form (CRF).

During the study period, 351 patients were screened for eligibility and 184 were randomized (Figure 1). Subsequent exclusion of the 3 randomized patients due to laparotomy, great omentum resection only, or small intestine ostomy left 91 patients in the intervention group and 90 in the control group. Table 1 compares the patients’ characteristics between the groups, which were well-balanced. 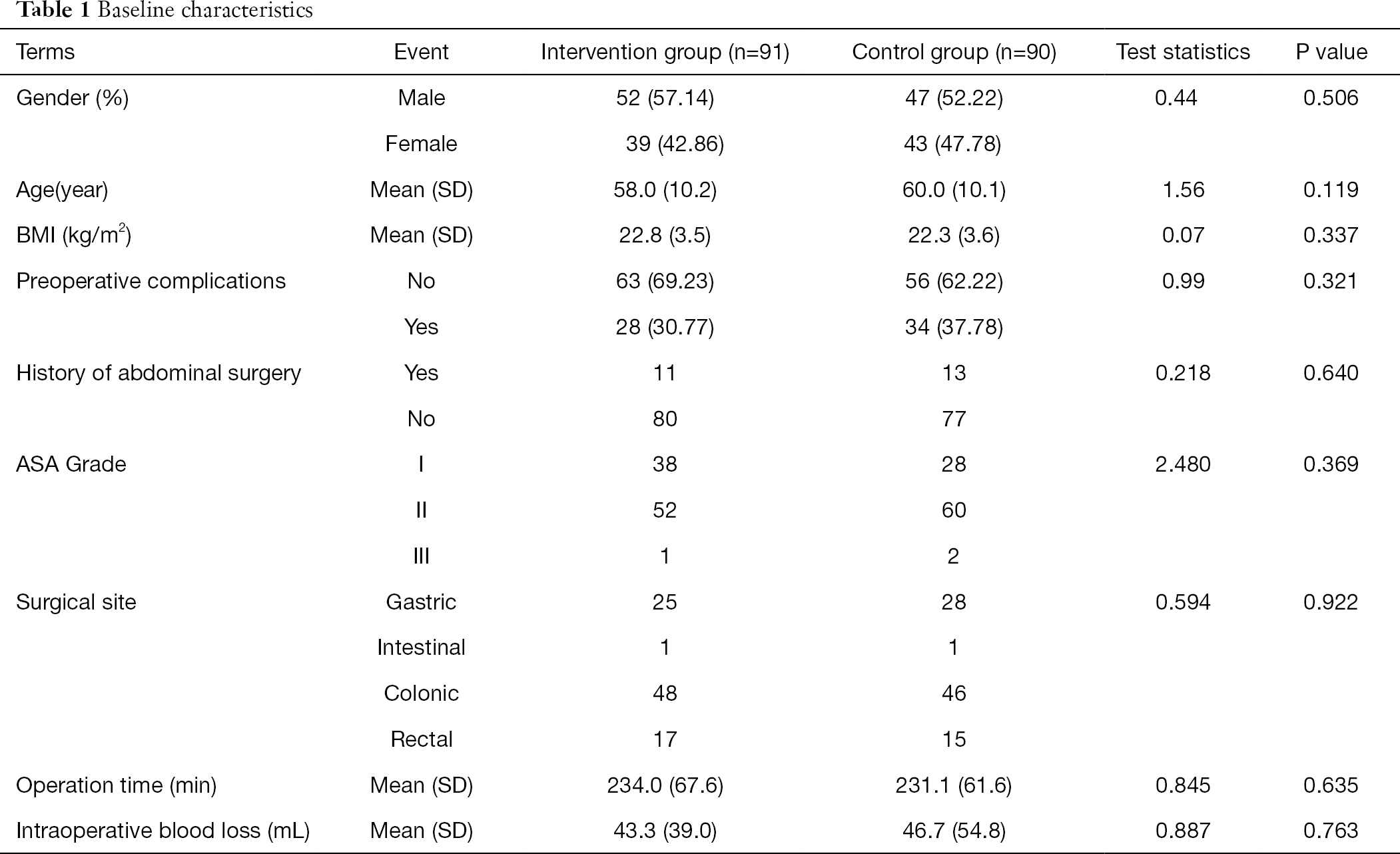 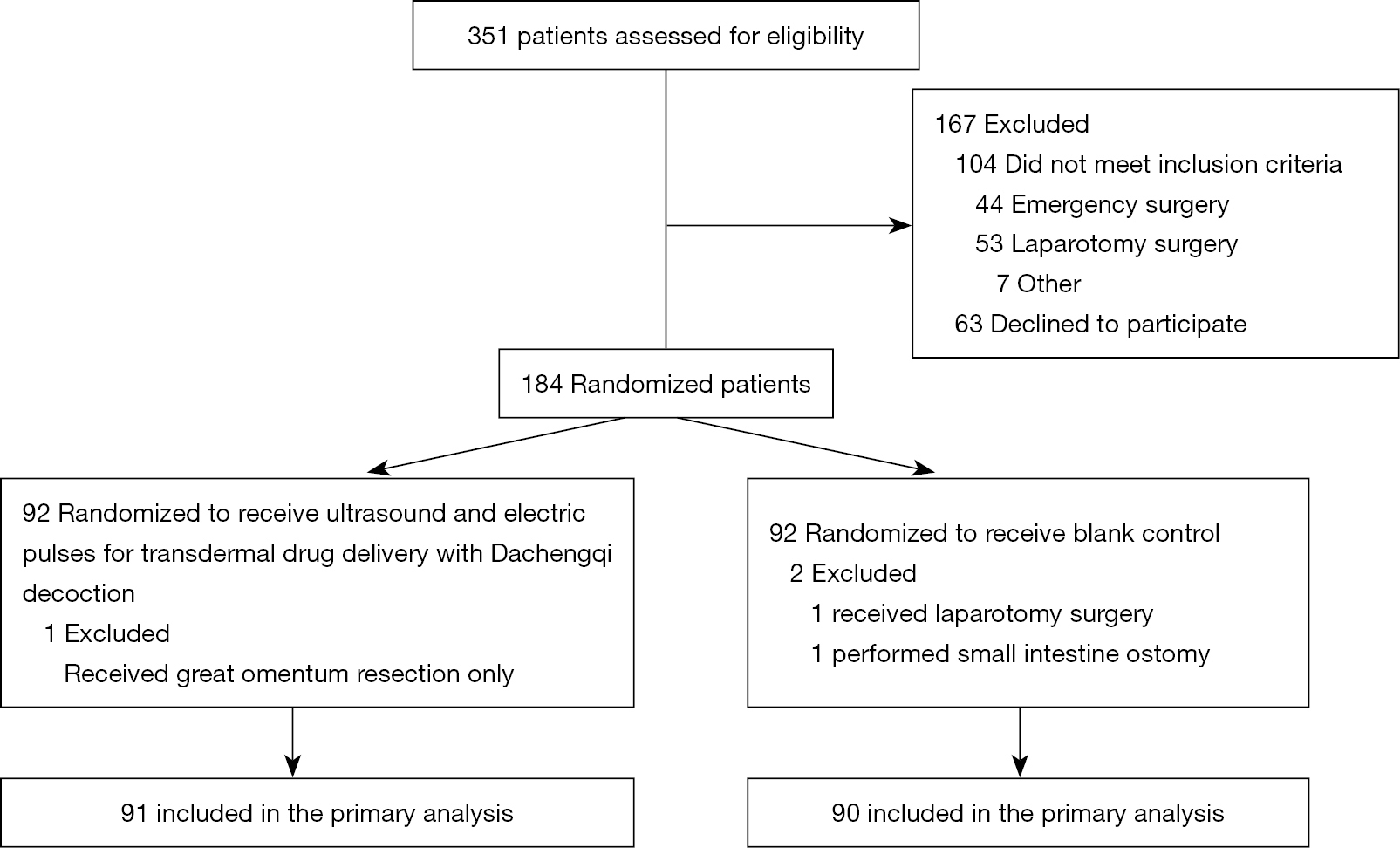 Postoperative time to first flatus differed significantly between the two groups: 35.8±17.6 h in the intervention group vs. 46.7±23.7 h in the control group, P=0.012 (Table 2). Regarding the superiority test for the main effective indicator, the 97.5% confidence interval for the mean difference was −4.0 (−17.26, −4.07), indicating that the intervention group was superior to control group, which was consistent with the PPS (Per-protocol set) results (Table 3).

Changes from baseline over time in alanine aminotransferase, aspartate aminotransferase, C-reactive protein, and Creatinine within each group are illustrated in Figure 2, which demonstrated no significant difference. Vital signs (Body temperature, Heart rate, Systolic pressure, and Diastolic pressure) results were summarized in Table S1, and Serological examinations (WBC, HGB and PLT) were summarized in Table S2, which showed no significant difference in the two groups. 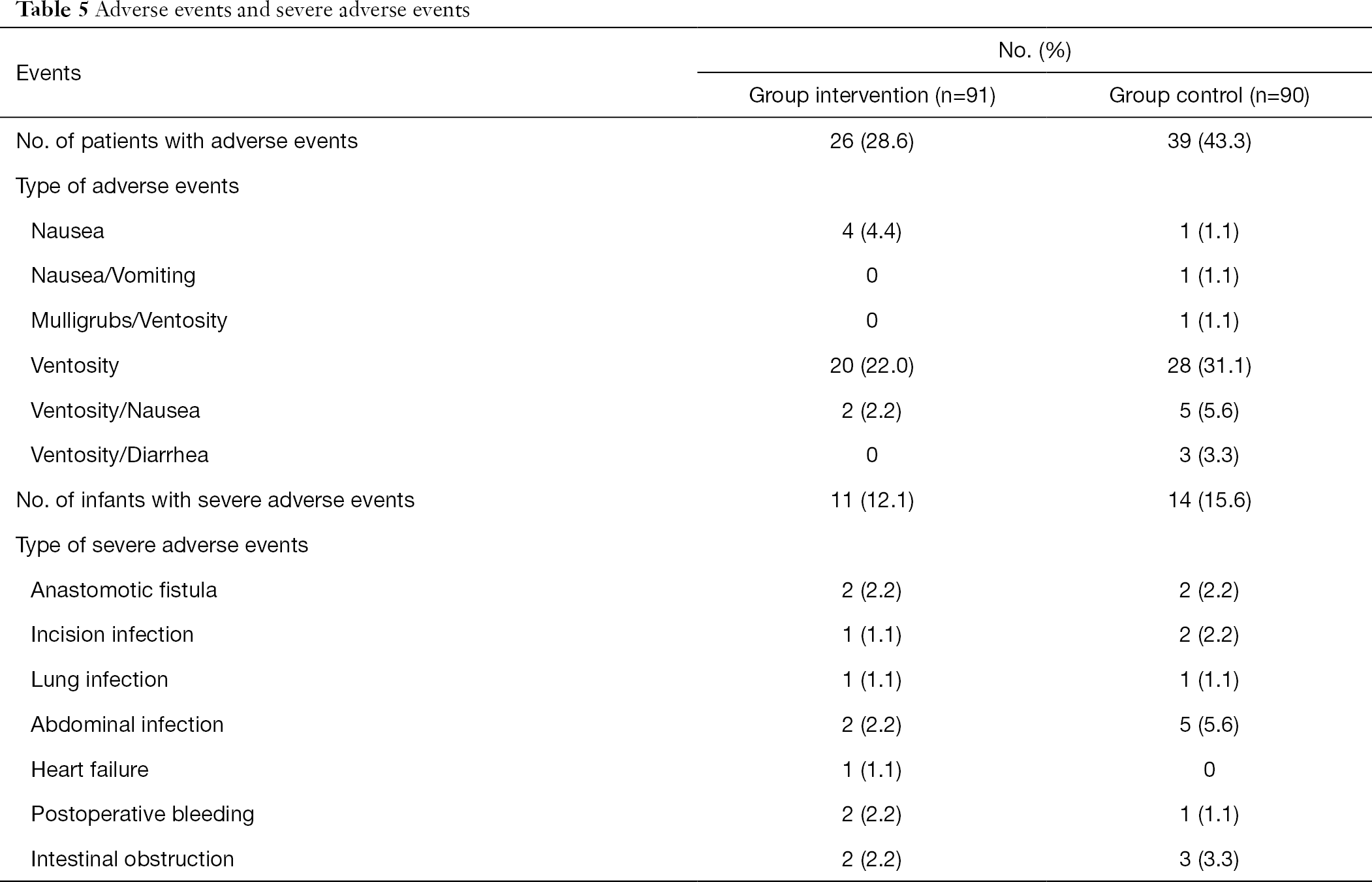 To the best of our knowledge, this is the first randomized controlled clinical trial to evaluate low-frequency ultrasound and electric pulses for transdermal drug delivery with DCQD treatment for patients after a laparoscopic gastrointestinal surgery. This design reflects the daily practice of the combination of Chinese and Western medicine treatment options in many centers of China (9-12).

This trial found significant differences in the time of the recovery of bowel movement and time to first flatus after laparoscopic gastrointestinal surgery between the group with low-frequency ultrasound and electric pulses for transdermal drug delivery with DCQD and the control group. Previous studies suggested that DCQD can increase plasma motilin, enhance gastrointestinal motility, improve gastric dysrhythmia, and reduce gastroparesis after an abdominal surgery (13-15). In the current study, we did not routinely test the plasma motilin, but we found that postoperative time to first flatus did shorten about 10.9 h. In the Pan (16) review, it was found that DCQD can reduce capillary endothelial damage in acute pancreatitis-associated intestinal injury and the mechanism may be associated with the regulation of endothelial barrier function-associated proteins AQP-1, MMP9, and JAM-C. Thus, we speculated that the DCQD could accelerate the recovery of intestinal function by reducing inflammation (5,17,18).

Although the results showed no significant difference in terms of postoperative intestinal obstruction (POI) (19), the risk of adverse events associated with postoperative gastrointestinal reactions (nausea, vomit, bloating, and others) occurred in 28.6% of the tested patients in the intervention group and 43.3% in the control group (P=0.038), which was shown to be an insignificant difference. Meta-analysis involved 664 participants from five randomized trials suggesting that patients receiving a traditional Chinese medication method combined with a conventional therapy seemed to have improved outcomes compared with the patients receiving a standard treatment alone (OR 4.24; 95% CI, 2.83 to 6.36) (20), which still lacks the support of advantageous evidence.

Safety needs to be considered when implementing a treatment. The type of severe adverse events did not show a significant difference between the two groups, and it was usually thought to be associated with surgical quality (21,22). During the treatment course, there were three adverse events (3.3%) caused by intervention, where two patients had electrical tingling sensation during the treatment. After adjusting the frequency of treatment, they were able to tolerate the follow-up treatment. In 1 case, there was a skin rash due to the affixed electrode during surgery, which was also observed in areas where the electrocardiographic monitoring electrodes were placed. The reactions were considered as an allergy to the medical tape. The rest of the patients had no pruritus, swelling, ulceration, or other adverse reactions. In this study, we routinely detected changes from baseline over time in liver and kidney function before and after surgery. There was no significant difference between the two groups (P>0.05) concerning ALT, AST, CREA, and CRP. Studies showed that the DCQD could reduce the degree of liver and kidney function damage in rats (23,24). Therefore, we believe that low-frequency ultrasound conduction combined with DCQD would not affect the function of the liver and kidney.

In summary, low-frequency ultrasound and electric pulses for transdermal drug delivery with traditional Chinese medicine DCQD can improve abdominal distention symptoms in patients after laparoscopic gastrointestinal surgery and shorten the recovery time of the gastrointestinal function. The implementation process was simple, and the degree of patient cooperation was high; thus, it can be a strategy to enhance patient recovery after surgery.

This study has several limitations. First, the trial was a single-center, randomized controlled clinical trial and not double-blinded, and thus there was a certain degree of bias. Further comprehensive verification and evidence from multi-center clinical studies are required. Second, it may be beneficial to have a placebo group in this study, where the low frequency ultrasonic transdermal delivery system with DCQD patch should be performed on a control group of patients without the treatment power on. Third, this study was a manifestation of the combination of Chinese and Western medicine treatment, and so although we achieved expected results in laparoscopic surgery patients, further studies are needed to prove the efficacy for laparotomy patients. Fourth, there were some heterogeneous types of surgical resection (gastric versus colorectal) in both arms of study, of which we have closely matched to reduce the bias. (Worth describing whether these were total/subtotal gastrectomy or right/left/subtotal colectomy, anterior resections etc. in Table 1).

The result of this study supported that low-frequency ultrasound and electric pulses for transdermal drug delivery with the DCQD can shorten the time of bowel movement recovery and accelerate time to first flatus after a laparoscopic gastrointestinal surgery. Furthermore, it is safe in clinical usage and has prospective clinical applications. 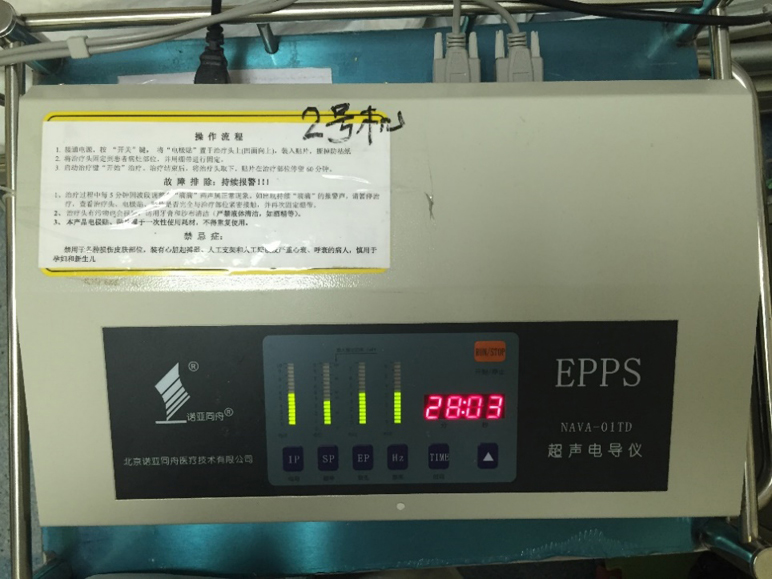 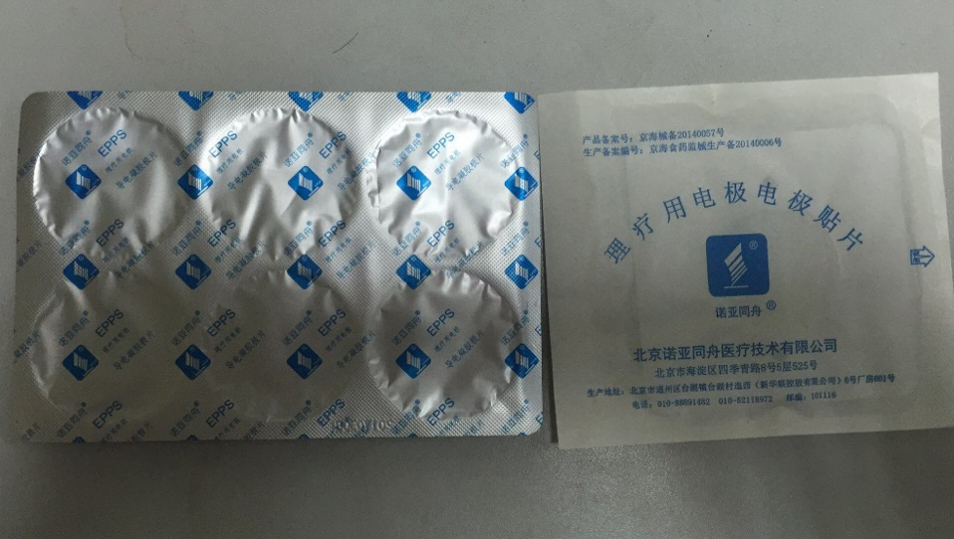 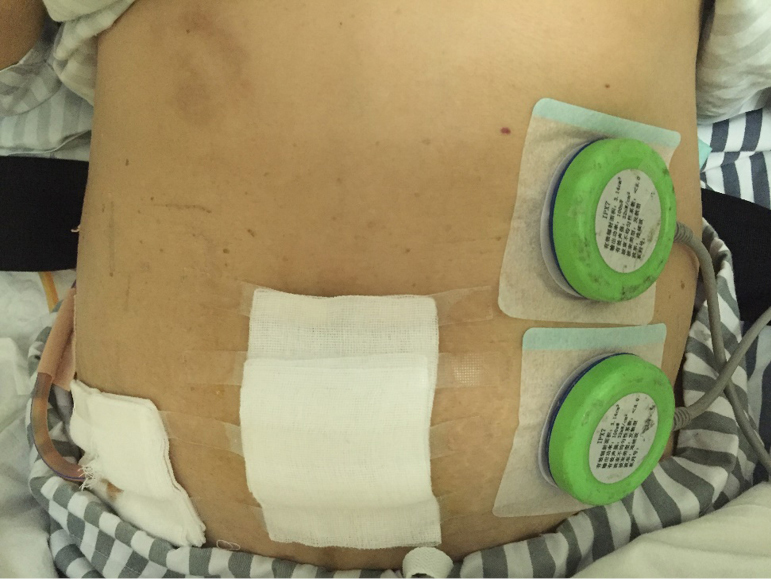 Funding: The trail was supported by the Research Fund of Guangdong Provincial People’s Hospital (No. KY012019130).

Reporting Checklist: The authors have completed the CONSORT reporting checklist. Available at http://dx.doi.org/10.21037/tcr-19-2671

Conflicts of Interest: All authors have completed the ICMJE uniform disclosure form (available at http://dx.doi.org/10.21037/tcr-19-2671). XF reports grants from the Research Fund of Guangdong Provincial People’s Hospital (No. KY012019130), outside the submitted work. The other authors have no conflicts of interest to declare.

Ethical Statement: The authors are accountable for all aspects of the work in ensuring that questions related to the accuracy or integrity of any part of the work are appropriately investigated and resolved. The study was conducted in accordance with the Declaration of Helsinki (as revised in 2013). The study was approved by the Ethics Committee of Guangdong Provincial People’s Hospital (No. GDRE2016429H) and informed consent was taken from all the patients.