Glutaminase 2 functions as a tumor suppressor gene in gastric cancer

Fresh gastric cancer tissue samples were collected from 36 patients with gastric cancer in our hospital from August 2014 to August 2019. All procedures performed in this study involving human participants were in accordance with the Declaration of Helsinki (as revised in 2013). The study was approved by the ethics committee of Changshu Hospital of Traditional Chinese Medicine (No. 20200102) and informed consent was taken from all the patients. All these patients underwent gastrectomy, which was pathologically diagnosed as gastric cancer. These patients included 25 males and 11 females.

Determining the expression of GLS2 mRNA

The total RNA was extracted with Trizol reagents from the gastric cancer tissue or adjacent non-cancer tissue, as directed by the manufacturer. A reverse transcription kit was synthesized to the cDNA. The primers of GLS2 and β-actin were synthesized by Invitrogen (Shanghai, China). The following primers are used: GLS2 (GI:313755752) forward primer: 5'-ttccgaaagtgtgtgagcag-3', reverse primer: 5'-ccacaggtctgggtttgact-3'; beta-actin (GI:1519311456) forward primer: 5'-ggacttcgagcaagagatgg-3', reverse primer: 5'-agcactgtgttggcgtacag-3'. The PCR reaction was performed using the ABI PRISM 7700 System (Applied Biosystems). The expression of GLS2 was defined from the threshold cycle (Ct), and relative expression levels were calculated using the 2−ΔΔCt method (23).

Western blot was used to detect protein expression according to the West blot method stated (24). Briefly, total proteins were extracted from cells with Radio-Immunoprecipitation Assay (RIPA) lysate buffer (Beyotime, Haimen, China), and then the protein concentration was detected using the bicinchoninic acid (BCA) (Beyotime, Haimen, China) method. Twelve percent separated total protein sodium dodecylsulphate polyacrylamide gel electrophoresis (SDS-PAGE) and transferred to a Polyvinylidene Fluoride (PVDF) membrane. The PVDF membrane was blocked with a TBS solution holding 5% non-fat milk at room temperature for 1 hour and then incubated with the primary antibody at 4 °C overnight. Subsequently, the PVDF membrane was incubated with the HRP-conjugated secondary antibody at 37 °C for one hour. Finally, enhanced chemiluminescence visualized the band (ECL) and analyzed with the QuantityOne software (Bio-Rad, USA). The relative expression value of the target protein is the gray level of the target protein corrected by the internal reference protein compared with that in the non-transfected control group.

The effect of GLS2 on MGC-803 cell proliferation was detected with Cell Counting Kit-8 assay (Beyotime, Haimen, China). Briefly, MGC-803 cells were seeded in 96-well plates at a density of 2×103/well and cultured at 37 °C with 5% CO2 for 24 hours. Then, MGC-803 cells were incubated with 10 µL Cell Counting Kit-8 at room temperature for four hours. Subsequently, the absorbance was read on a Microplate Reader at 450 nm (Bio Tek, Thenceforth, USA).

Annexin V-fluorescein isothiocyanate (FITC) Apoptosis Detection Kit (Beyotime, Haimen, China) was used to detect the effect of GLS2 on cell apoptosis in MGC-803. Briefly, the cells were harvested, and the lentivirus expression vector was transfected with GLS2 overexpression. At room temperature in the dark, the cells were then washed with phosphate buffered solution (PBS) and incubated with Annexin V-FITC for 10 min. The cells were subsequently resuspended from binding buffer Annexin V-FITC before incubating in the dark with propidium iodide (PI) staining solution. The stained cells are immediately studied using flow cytometry (BD Biosciences, Franklin Lakes, NJ, USA).

Transwell chamber assay (Beyotime, Haimen, China) was used to determine GLS2’s effect on MGC-803 cell migration capability. In short, 1×105 cells were seeded in the upper chamber of the Transwell invasion system (200 µL RPMI-1640 medium for 10 % FBS) and 600 µL MEM medium with 10% FBS was added to the lower chamber. For Cell Counting Kit-8, the cells that migrated through the chamber’s polycarbonate membrane into the lower chamber were detected after 24 hours. The number of living cells in the lower chamber may be indicative of tumor cell migration potential.

The SPSS19.0 software was used for data analysis. Data are expressed as mean ± SD of three independent experiments. One-way ANOVA and t-test were used in this study. The results were considered statistically significant if P<0.05. 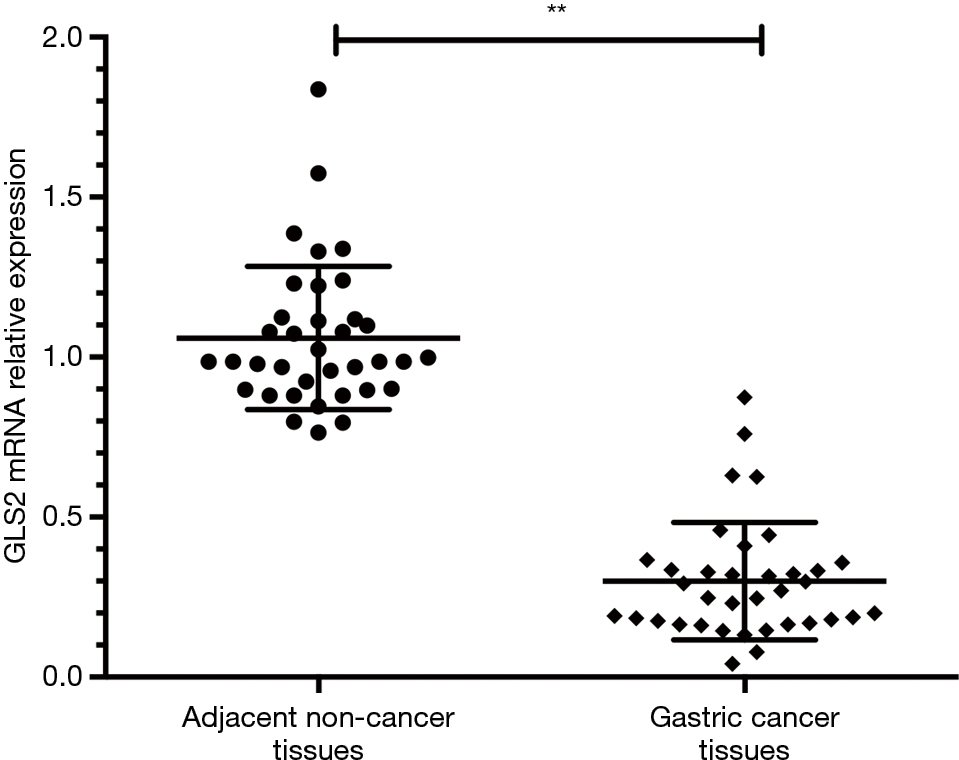 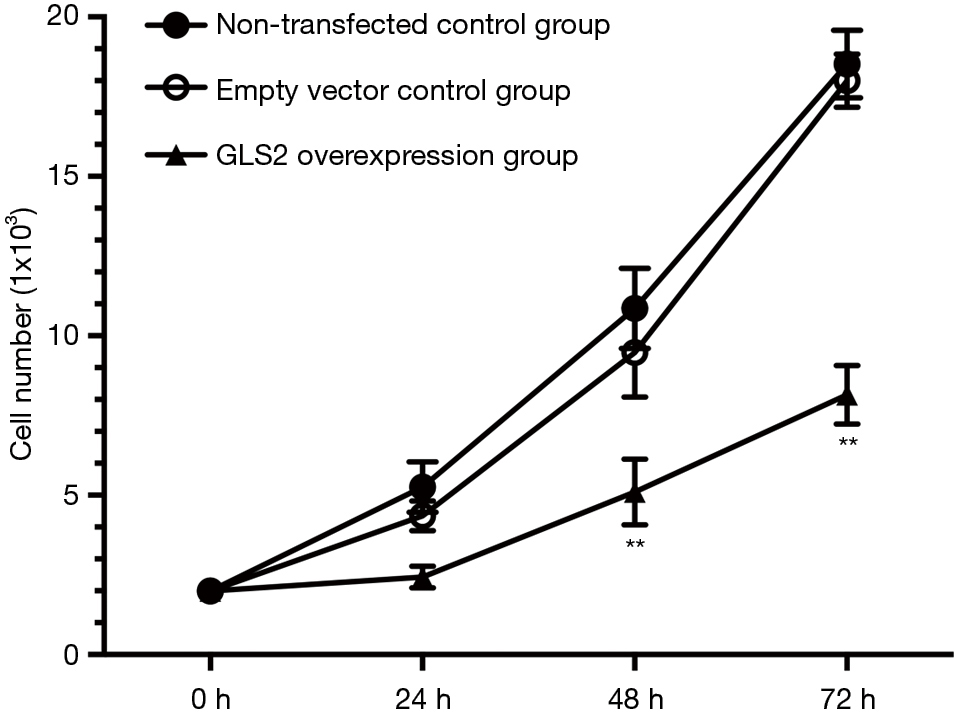 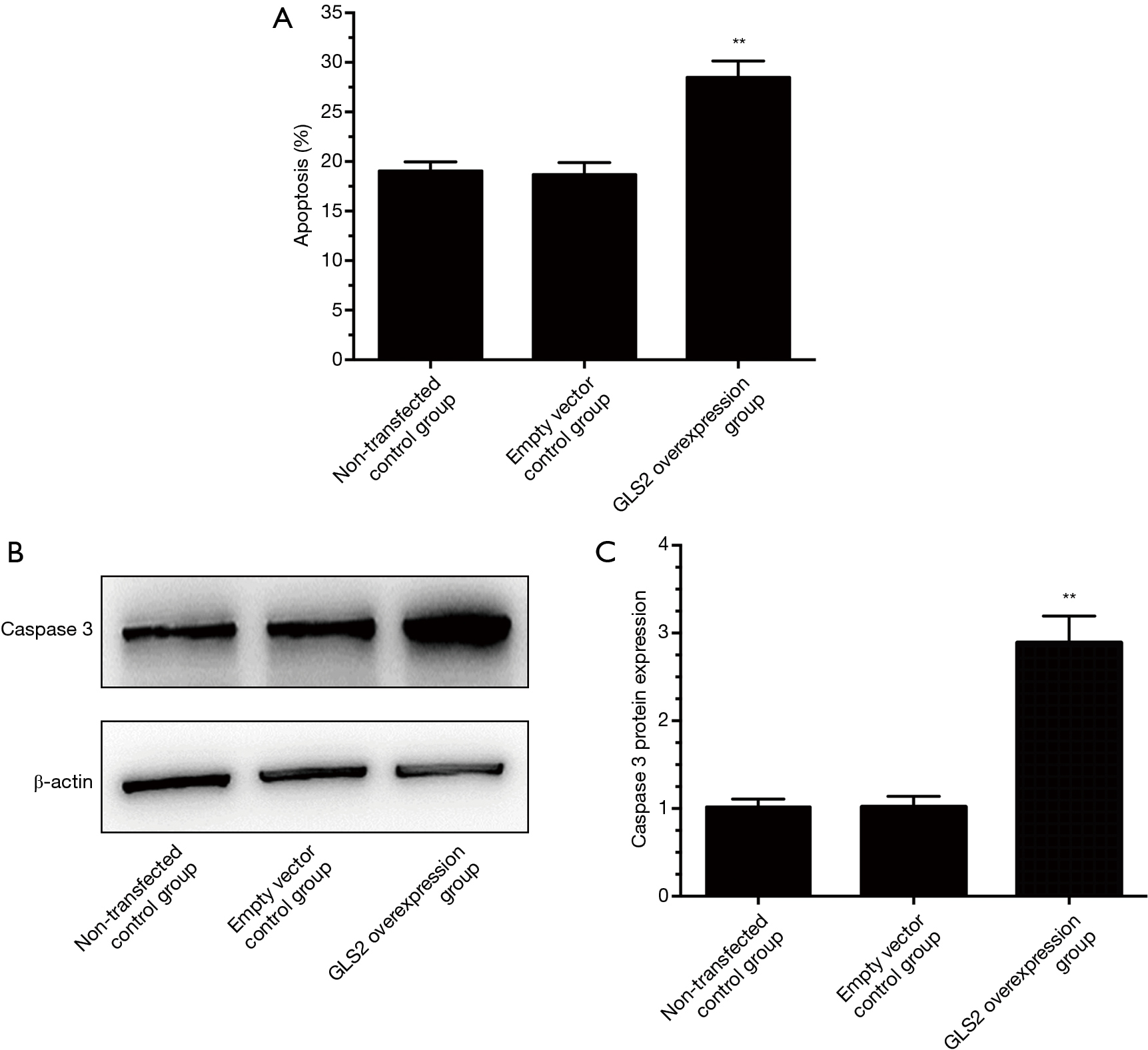 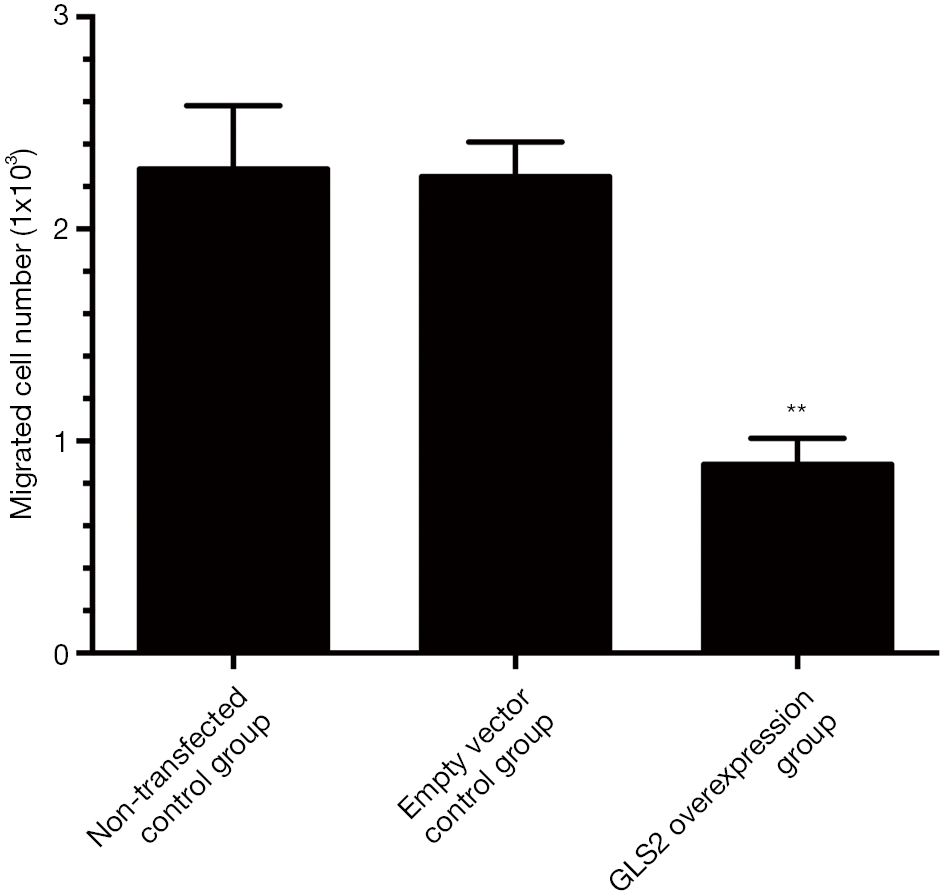 GLS2 is a type of glutaminase isoenzyme, which is responsible for the conversion of glutamine to glutamate (25). There seem to be two types of glutaminase isoenzymes, including GLS1 and GLS2, which have contrasting functions in tumorigenesis (26). One of the two GLS isoenzymes, GLS1, is highly expressed in cancer and has oncogenic properties, which fuels the rapid proliferation of cancer cells through hydrolyzing glutamine into glutamate (16,27). Masamha et al. found that GLS1 displayed a significant upregulation in ovarian cancer, especially in metastatic cancer cells (28). Xiang et al. demonstrated that GLS1 was overexpressed in colorectal cancer and significantly associated with lymph node metastasis and advanced clinical stage (27). While, GLS2, a direct p53 target gene, has been described as a tumor suppressor. Ramirez-Peña et al. demonstrated that GLS2 displayed a significant downregulation in breast cancer and was inversely associated with epithelial to mesenchymal transition (EMT), while high expression of GLS2 was associated with increased survival of breast cancer patients (29). However, there appear to be few reports about GLS2 expression and its biological role in gastric cancer.

In the current study, we found that the expression of GLS2 mRNA in the tissues of gastric cancer was significantly lower than in adjacent non-cancer tissue, suggesting that GLS2 downregulation might be associated with the development and progression of gastric cancer. Our data were consistent with the previous reports that GLS2 was repressed in many tumor cells, such as HCCs and glioblastomas (16,30). Szeliga et al. demonstrated that GLS2 displayed a significant downregulation in glioblastoma due to DNA demethylation, while CpG methylation was absent in GLS2-expressing adjacent non-cancer brain tissues (20). Kuo and his colleagues found that the expression of GLS2 was repressed in human HCC tissues, and was inversely associated with poor prognosis (31). These data suggested that the downregulation of GLS2 could possibly be a specific tumor biomarker for gastric cancer, which may contribute to gastric tumorigenesis.

Conflicts of Interest: All authors have completed the ICMJE uniform disclosure form (available at http://dx.doi.org/10.21037/tcr-20-2246). The authors have no conflicts of interest to declare.

Ethical Statement: The authors are accountable for all aspects of the work in ensuring that questions related to the accuracy or integrity of any part of the work are appropriately investigated and resolved. All procedures performed in this study involving human participants were in accordance with the Declaration of Helsinki (as revised in 2013). The study was approved by the ethics committee of Changshu Hospital of Traditional Chinese Medicine (No. 20200102) and informed consent was taken from all the patients.