The correlations between socioeconomic status and intrahepatic cholangiocarcinoma in the United States: a population-based study

Primary liver cancer is one of the most common types of cancer and is a leading cause of cancer-related mortality globally. Approximately 35,660 patients are diagnosed with this malignancy in the United States (US) annually (1). Among primary liver cancer cases, approximately 15% are cases of intrahepatic cholangiocarcinoma (ICC). Over the past three decades, the incidence of ICC has increased by 165% from approximately 0.35 cases per 100,000 in the US, as indicated by the National Cancer Institute’s Surveillance, Epidemiology, and End Results (SEER) program database. ICC is typically advanced or fatal when diagnosed, making it more difficult to treat (2-5). Over the past two decades, management strategies have been developed for with continuous progress in surgical methods, systemic chemotherapy and targeted radiation therapy keeping update (6). Choosing a best appropriate treatment for individualized cancer therapy needs precise staging and prognostic stratification to distinguish risk populations.

In this study, we aimed to show the correlations between SES and ICC in the US, on the Surveillance, Epidemiology, and End Results (SEER) database. Using disadvantageous SES, we generated a prognostic score model for risk stratiﬁcation for ICC. We hypothesis that low-risk socioeconomic status (SES) confers protective effects in ICC. We present the following article in accordance with the STROBE reporting checklist (available at http://dx.doi.org/10.21037/tcr-20-2506).

The SEER database is supported by the US National Cancer Institute, and it collects information on patient demographics and case characteristics from 18 population-based cancer registries. Data on cancer incidence and survival are published using this database. The dataset used for the current retrospective study was the April 2018 release of SEER whose patients diagnosed 1973–2015, which includes data about 30% of the US population. SEER is an open-access database, and thus it is available for research. We obtained permission to access the data files with the reference number 12948-Nov2015. The study was conducted in accordance with the Declaration of Helsinki (as revised in 2013) and the study approved by the ethics committee of the 4th Affiliated Hospital of Harbin Medical University, Harbin, China (Ethic No. 2020-SCILLSC-05). As the data extracted from this database were anonymized and de-identified before release, participants were not needed to supply informed consent.

We included ICC patients identified with using the International Classification of Diseases for Oncology, 3rd Edition (ICD-O-3), topography code C22.0 (primary liver cancer) and morphology codes 8160 and 8161, or by topography code C22.1 (intrahepatic bile duct cancer) and morphology codes 8010, 8020, 8140, 8160, and 8161, which diagnostic criteria for ICC were consisted with previous study (12). We will define cut-points for “% unemployment rate” and “%< High School Education” quintiles for all US counties combined using 2011–2015 ACS data. To be consistent in our analyses, we will use the same US cut-points for the incidence and survival, as described in https://seer.cancer.gov/seerstat/tutorials/rate5/webprint/. Thus, we excluded patients who were diagnosed before 2011. All the included patients were diagnosed between 2011 and 2015. We excluded ineligible cases using the following criteria: (I) patients with more than one primary tumor, (II) patients aged <18 years or with an unknown age at diagnoses, and (III) patients missing data on TNM category, insurance records, or marital status.

The primary outcomes of interest were age-adjusted incidence rates, cause-specific survival (CSS), and overall survival (OS). ICC incidence rates per 100,000 persons were directly age-adjusted to the 2000 US population. For the analysis of CSS, deaths attributed to ICC were events, while deaths from other causes were censored, and surviving patients were censored at last follow-up. OS represent for the time from the date of diagnosis to the date of death. There were no restrictions on the cause of death.

For continuous variables, descriptive statistics were converted into categorical variables based on the interquartile range (IQR) (i.e., median household income, unemployment rates, and county educational levels). Follow-up times were reported as medians and IQRs. ICC incidence rates performed with rate session of SEER*Stat. all steps were carried out as described by the official website of SEER. Univariate and multivariate Cox regression analyses were performed to quantify the impact of socioeconomic factors on survival outcomes. Disadvantageous SES was used to set up a prognostic score model for risk stratiﬁcation, then the Kaplan-Meier method and the log-rank test were performed to identify the influence of SES on for ICC CSS/OS. The stratified analysis were performed at gender or age at diagnosis subgroup to assess the potential reasons for the survival disparity between the patient subgroups with different scores. Statistical analyses were performed using SEER*Stat 8.3.5, or SPSS, version 21.0 (SPSS Inc., Chicago, IL, USA). Two-sided tests were considered significant if P<0.05. 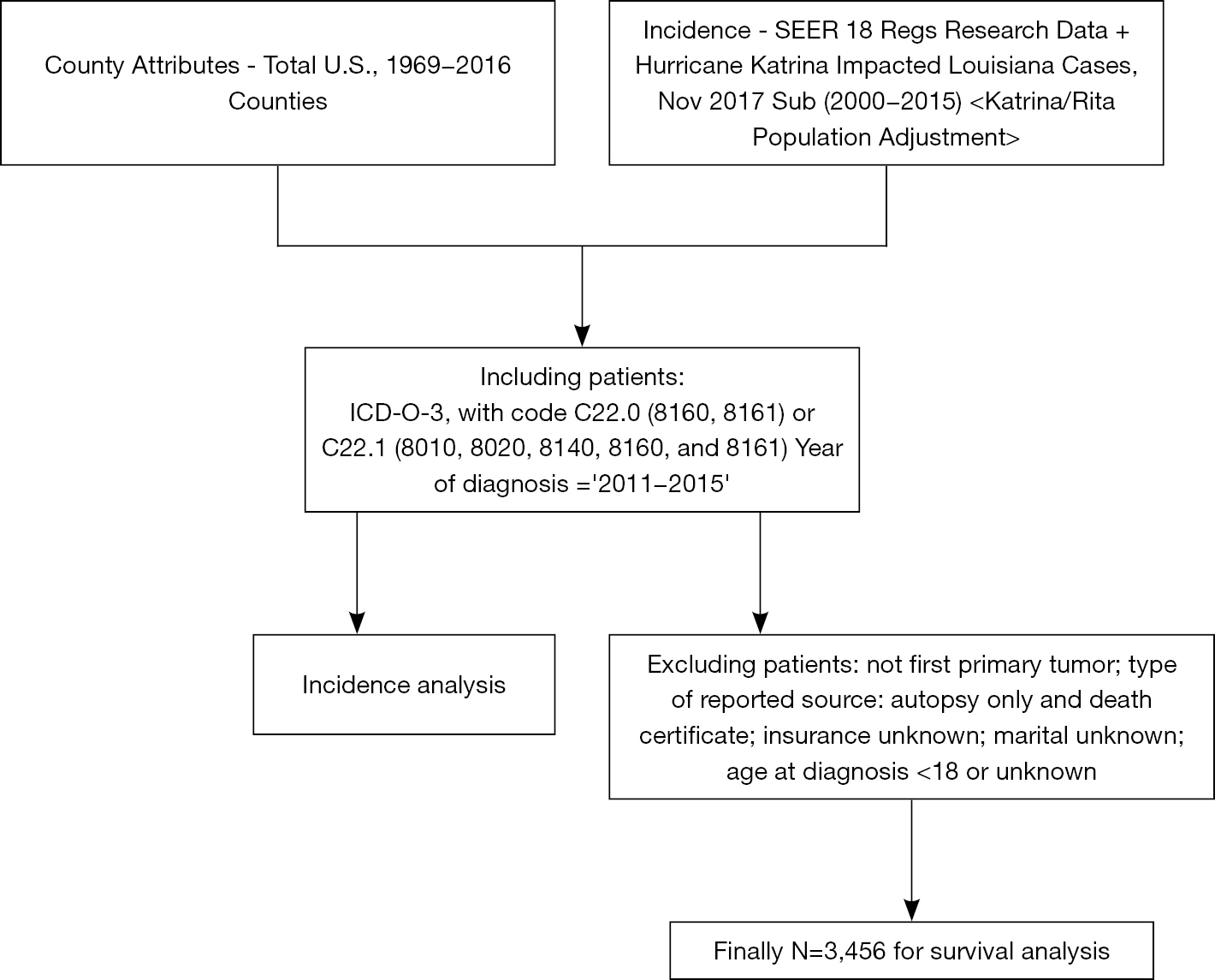 Figure 1 Flow diagram for the study. 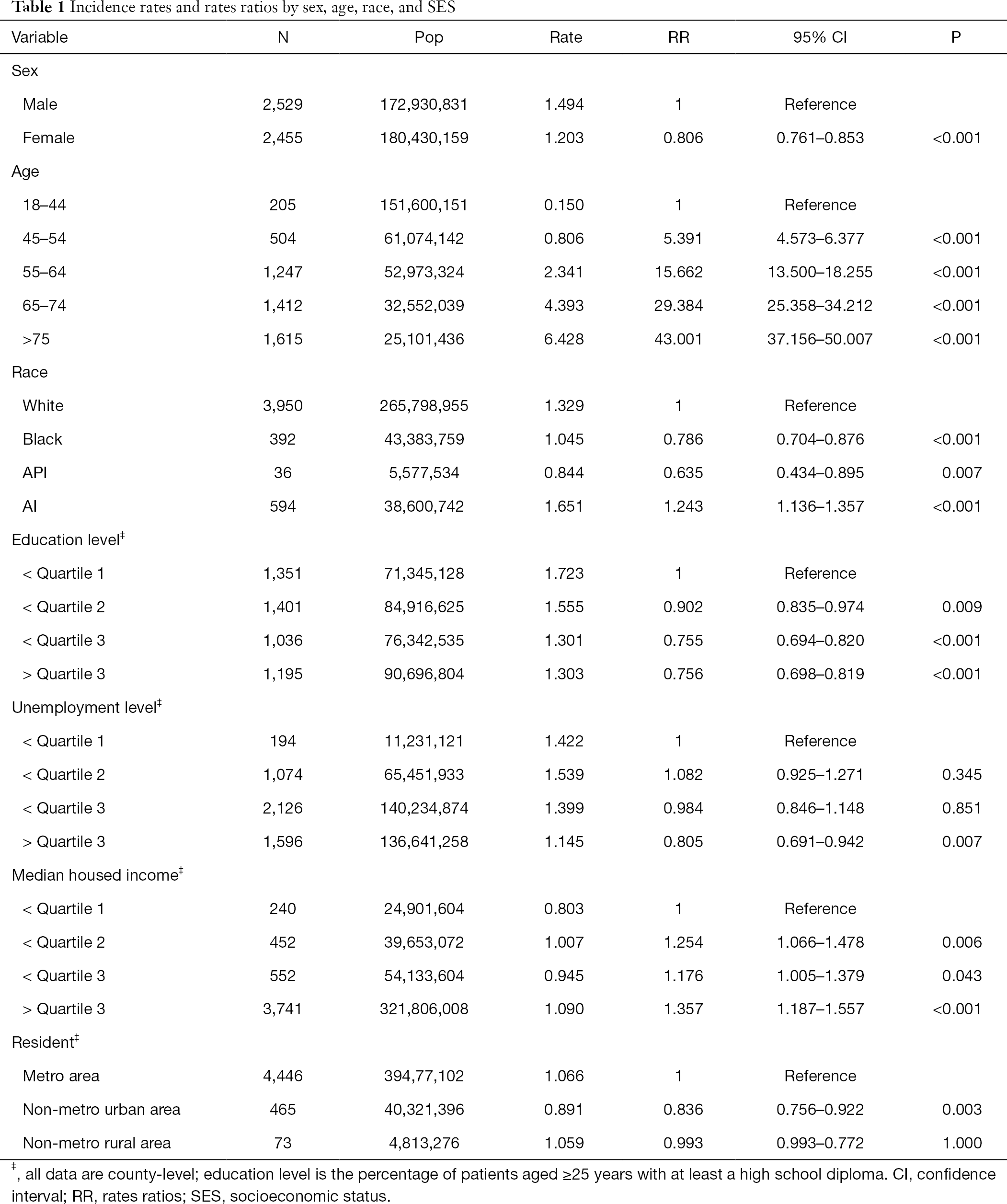 The effect of socioeconomic factors on CSS and OS 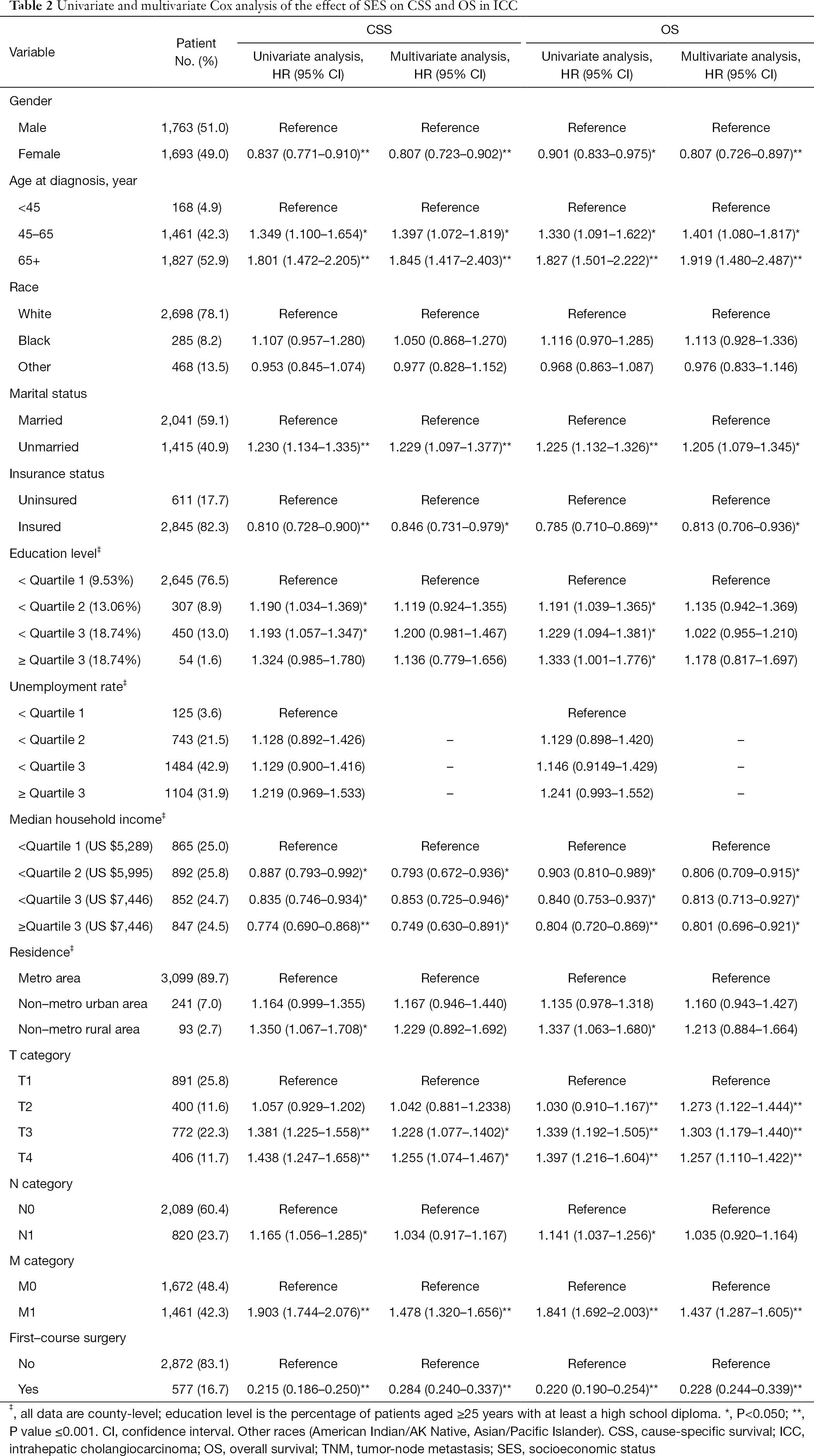 Establishment and application of a prognostic score model 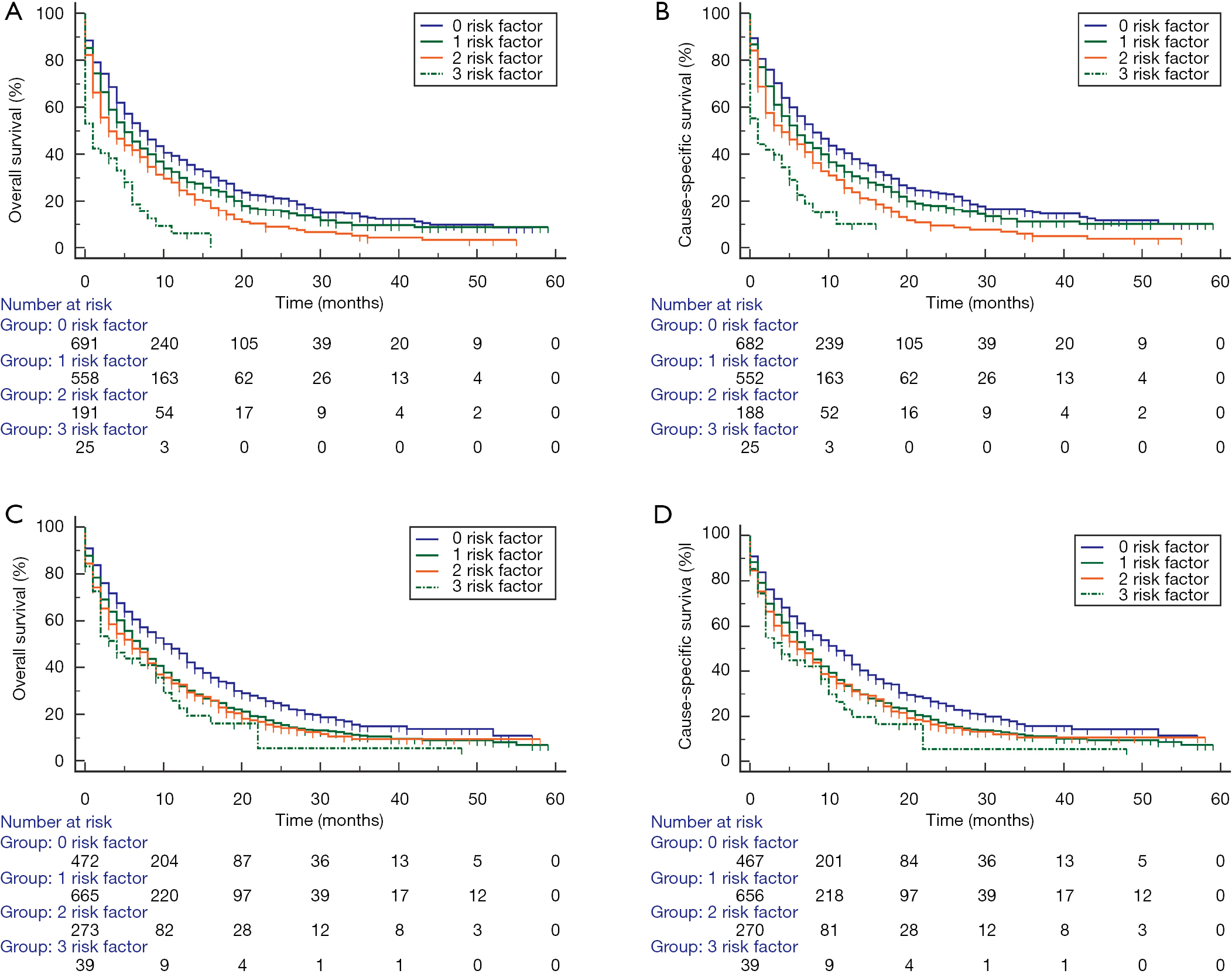 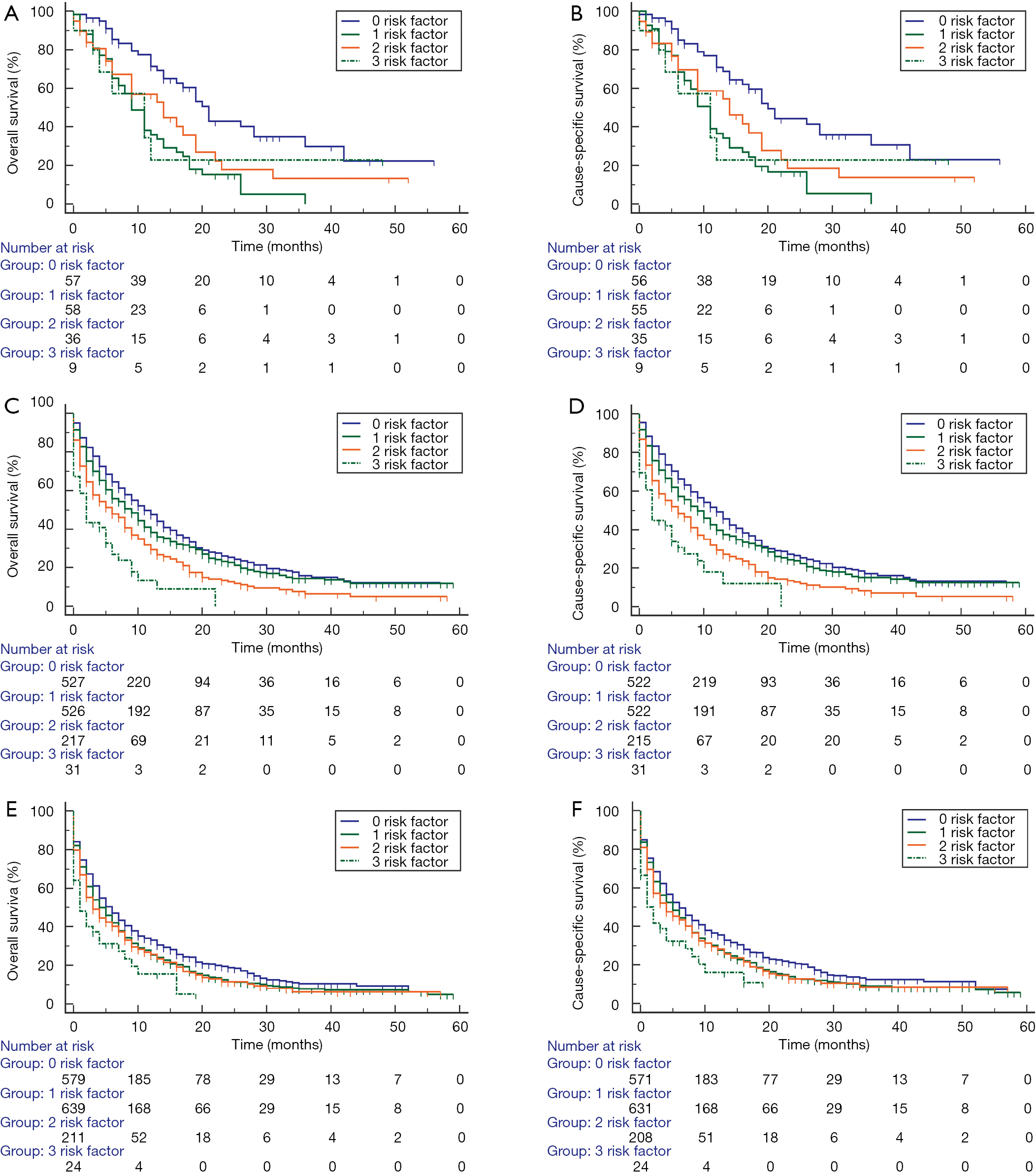 In this study, we assess the correlations between SES and ICC incidence and survival in the US. The result shows that low county education levels may be associated with increased ICC risk. Importantly, we found that median household income, insurance status, and marital status were significant predictors of survival outcomes. Establishment and application of a prognostic score model, we found that ICC patients with low-risk SES had better survival outcomes.

The US is a nation with a robust medical system. However, the associations between SES and ICC incidence and survival remain not very clear. Socioeconomic barriers may increase the cancer burden at the early diagnosis stage, and disparities in income are associated with delayed diagnosis of more advanced cancers (13). Studies have indicated that individuals with a higher-level SES are more likely to participate in screening or have better access to high-quality treatment throughout disease progression (8). Conversely, those with a lower level SES, including those with universal health care (14,15), are expected to have relatively worse cancer survival rates and to have an increased risk of mortality due to obstacles to obtaining treatment before cancer has become incurable (16). The data for each patient were collected in a unified, standardized manner by the SEER program. Therefore, the SEER database was suitable to assess the impact of socioeconomic factors on the incidence and survival of ICC in this study.

Our study also reveals the incidence of ICC in men is slightly higher than that in women, which is consist with previous stduy(17), and men had more reduced survival than females for most cancers (18,19). Some studies have reported that increased cancer risk in men may be associated with their larger body sizes and higher basal metabolic rates (BMR) (20). Increased cell proliferation in men could also be associated with a higher risk of cancer (21). However, the larger body size is not a decisive factor in determining the increased risk of cancers, and associations include not only sex but also other causal factors (22). Most studies have concentrated on body mass index or weight, which might not be specific or reliable markers of cell numbers (20). Some studies have pointed out that some possible biological determinants vary significantly in sex. There are sex-related differences in susceptibility, sex steroid hormone levels, chronic antigenic stimuli and immune response to infectious agents (23). Some studies have demonstrated that being married is protective against many malignant tumors and have better survival (24-27). Such studies support the belief that, as compared with unmarried patients, patients who are married may have better access to health care and more significant financial resources for timely detection and treatment. This phenomenon has been explained by some psychological, biological, and social theories (28). Conversely, it is believed that unmarried and widowed patients are at higher risk of experiencing mental depression and psychological distress, as such patients lack sufficient social and emotional support (29,30). Therefore, patients with adequate emotional support might have better persistence with prescribed treatments and healthier lifestyles than unmarried or widowed patients (31). The potential mechanisms driving this relationship might be related to immune and endocrine function (31).

In our study, we found that median household income, insurance status, and marital status were independent predictors of survival outcomes. Using above three disadvantageous SES, we generated a prognostic score model for risk stratiﬁcation, then we found that ICC patients with low-risk SES had better survival outcomes. Those with a higher income or with insurance can obtain better financial support, enabling them to receive adequate treatment promptly. A report from National Inpatient Sample Database (1997–2012) demonstrated that the mean hospitalization costs per patient increased from $36,460 to $77,753 over the study period (32). Patients with high household income living in a suitable environment may have better access to care that could improve their prognosis. Further, they may have a higher capacity to improve their health status because of their knowledge, social connections, financial abilities, and other resources. In contrast, social isolation, depression, and occupational stress in individuals with low household incomes may make it more challenging for them to gain helpful opinions from relatives or friends (33). Some studies have demonstrated that being insured is correlated with cancer-specific mortality, even in patients with non-metastatic disease. Patients without insurance may suffer more significant financial distress and inability to afford cancer care; such difficulties may result in giving up medical care (34).

Our findings that race, unemployment, place of residence, and county educational level are not significantly associated with survival outcomes for ICC were not consistent with previous studies, which reported the significant effects of these factors on patients with ICC (35,36). These discrepancies may be caused by the different geographical settings of the studies, which may be affected by various factors, such as the types of residences, unbalanced county educational backgrounds, and other socioeconomic factors. Furthermore, categorical variables (e.g., residence) in the earlier studies were classified based on standards that were specific to each data source, which may also have led to different outcomes.

This study has some limitations that should be taken into consideration. First, the SEER database does not provide all characteristics that are potentially correlated with socioeconomic factors. Furthermore, detailed etiological and treatment data were not recorded in the SEER database, such as the lifestyles of patients, occupational exposures, and chemotherapy regimens. These and similar factors may be correlated with the incidence and survival of patients with ICC. Second, unpredictable changes in socioeconomic factors, such as marital status, may have occurred after registration or during therapy. As previously discussed, marital status has a signiﬁcant impact on health, and thus, changes in marital status are likely to have impacted the associations investigated in this study (37,38). Third, it is necessary to point out that education levels, unemployment rates and median housed income used in our analysis were measured at the county-level, which may vary significantly across census tracts or neighborhoods within a given county. They are contextual-level variables, not the individuals in this study.

The rates of ICC incidence and mortality are high in the US and have been increasing. There is a need for further studies to identify groups that are at high risk of ICC and predict their survival outcomes, who might beneﬁt from screening and surveillance programs focused on earlier diagnosis and timely treatment. Therefore, SES may have signiﬁcance for predicting incidence and survival outcomes.

Reporting Checklist: The authors have completed the STROBE reporting checklist. Available at http://dx.doi.org/10.21037/tcr-20-2506

Conflicts of Interest: Both authors have completed the ICMJE uniform disclosure form (available at http://dx.doi.org/10.21037/tcr-20-2506). The authors have no conflicts of interest to declare.

Ethical Statement: The authors are accountable for all aspects of the work in ensuring that questions related to the accuracy or integrity of any part of the work are appropriately investigated and resolved. The study was conducted in accordance with the Declaration of Helsinki (as revised in 2013) and the study was approved by the ethics committee of the 4th Affiliated Hospital of Harbin Medical University, Harbin, China (Ethic No. 2020-SCILLSC-05). As the data extracted from this database were anonymized and de-identified before release, participants were not needed to supply informed consent.