B cell malignancies are classified as different types based on cell surface expression of various clusters of differentiation molecules. There are three main types of B-cell malignancies which are largely heterogeneous: B cell acute lymphoblastic leukemia (B-ALL), chronic lymphocytic leukemia (CLL) and B cell non-Hodgkin lymphoma (NHL) (1,2). Adoptive transfer of T cells engineered to express a chimeric antigen receptor (CAR) has emerged as an impactful targeted immunotherapy (Figure 1), showing prominent responses in refractory patients (3-5). In 2017, CAR-T therapy has achieved regulatory approval to conduct late phase clinical testing in the US (6). CARs comprise a tumor-targeting structure, which is often in the form of a single chain variable fragment derived from a monoclonal antibody, a transmembrane structure, and one or more intracellular T cell signaling sequences (7). Tumor-specific antigens are not yet well defined except for CD19, which is a B cell lineage-specific antigen that is expressed on malignant B cells in patients with B-ALL, CLL and B cell NHL (8). CAR-modified T cells with specificity against CD19 have demonstrated significant promise against highly refractory hematologic malignancies (9,10). Inspiring clinical outcomes with high complete remission (CR) rates (90%) have been reported in children and adults with refractory ALL, CLL and lymphoma (11-13). 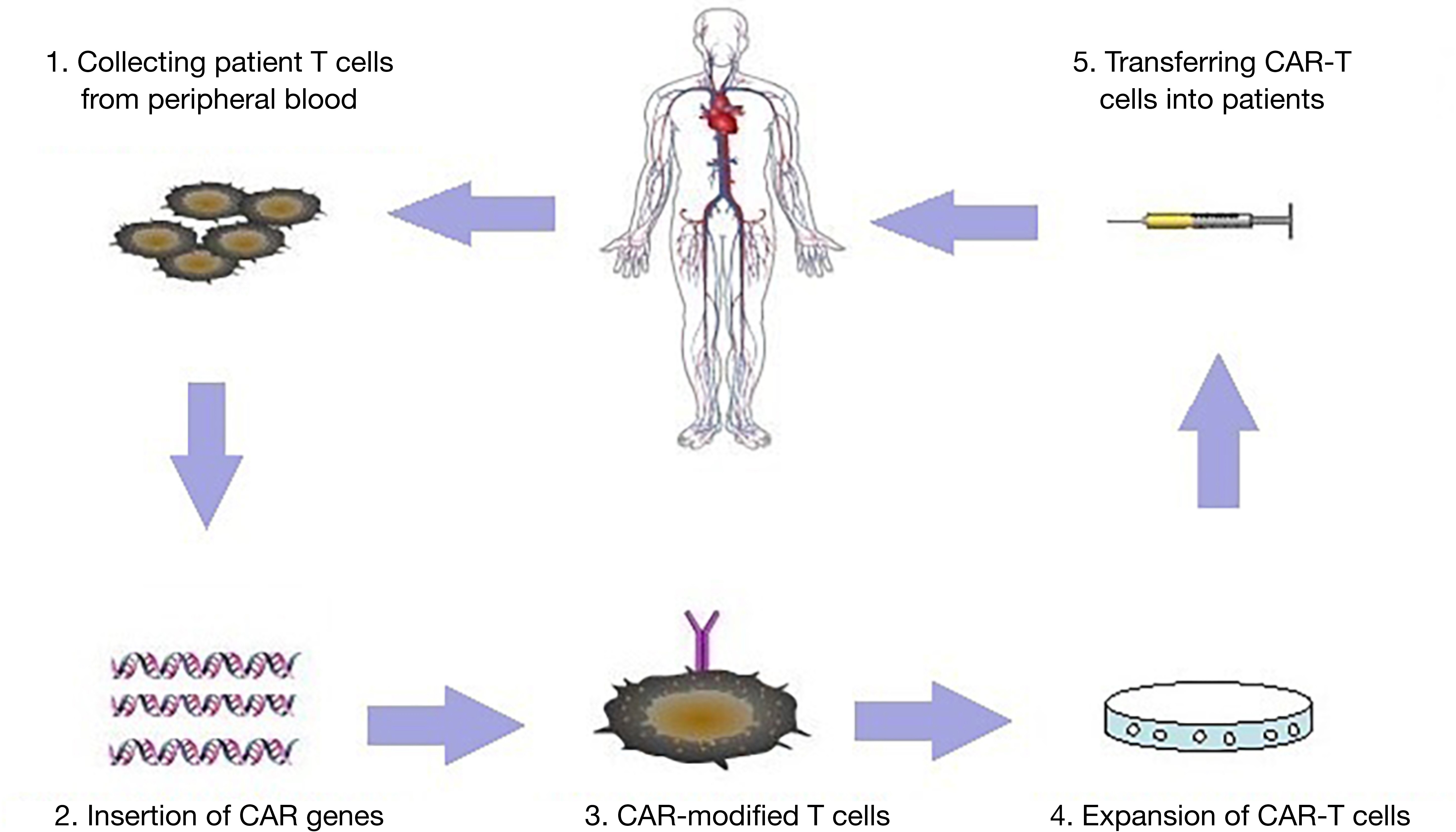 We present the following article in accordance with the Narrative Review reporting checklist (available at http://dx.doi.org/10.21037/tcr-20-1044).

Potential factors of CD19-CAR therapy in B cell malignancies

It is 20 years since the general concept of the CAR T cell was devised. The technology of redirecting T-cell function has been translated into clinical application during this relatively short period of time. Several groups have reported anti-tumor effects of CD19-directed CAR T cells in patients with B cell malignancies (7,18,19). However, the response rates of CAR T cells in the immunotherapy of B cell malignancies have varied widely. It is still unclear about the critical factors of improving the efficacy of CD19-CAR T cell therapy in B-lineage malignancies. T cell persistence, lymphodepletion, the treatment of T cells with CD3/CD28 beads and IL-2 administration are the potential critical factors of T cells associated with response rate of CD19-CAR T cell therapy.

Since CAR T cells must persist for a sufficient period of time to ensure successful tumor elimination, insufficient T cell persistence is considered as a critical challenge of CAR-T therapy (20). The persistence of adoptively transferred CAR T cells was positively correlated with clinical response rates in B-cell malignancies (21). Although the efficacious method of enhancing the persistence of CAR-modified T cells has not been developed, the potential factors have been reported, which include lymphodepletion and patient tumor burden (22). Recently, studies have indicated that T cell persistence and anti-tumor functions can be improved by re-directed homing of T cells to the bone marrow (22).

Lymphodepletion, also called conditioning chemotherapy, may reduce the tumor burden of patients. Lymphodepletion could make new niches for infused CAR T cells by reducing resident cell populations (23,24). Lymphodepletion will enhance the persistence of T cells, which was administrated before the T cell infusion (25,26). Some studies have shown an inverse relationship between the persistence of CAR T cells and the patients’ tumor burden (21,27,28). Conditioning chemotherapy-administrated patients are likely to achieve better clinical benefits.

The first generation CARs were designed to connect an antibody-derived scFv to the CD3z intracellular signaling domain of the T cell receptor through hinge and transmembrane domains. However, because of the lack of costimulation in tumor cell targets, the first-generation CARs showed limited expansion and relatively short persistence (29-31). The lack of co-stimulation molecules leads to the immune escape of tumor cells and rapid apoptosis of T-cells (32,33). To solve the above problems, second generation CARs incorporated costimulatory endodomains, including CD28 (34,35), 4-1BB (CD137) (36,37), into CAR molecules (Figure 2). The optimization of the used cytokines and growth conditions are crucial for the expansion and related anti-tumor activity of CAR-T cells (38). CD3/CD28 bead treatment and no IL-2 administration to T cells were significantly positively associated with better clinical outcomes, compared with irradiation and IL-21 treatment to T cells. IL-2 is a cytokine, which was frequently applied to promote the first-generation CAR T cells expansion in vitro (26). Second-generation CARs induces IL-2 secretion and T cell proliferation upon CAR cross-linking (9). Anti-CD3/CD28 mAb-coated magnetic beads were used to provide an initial signal for stimulating T cell expansion (39). 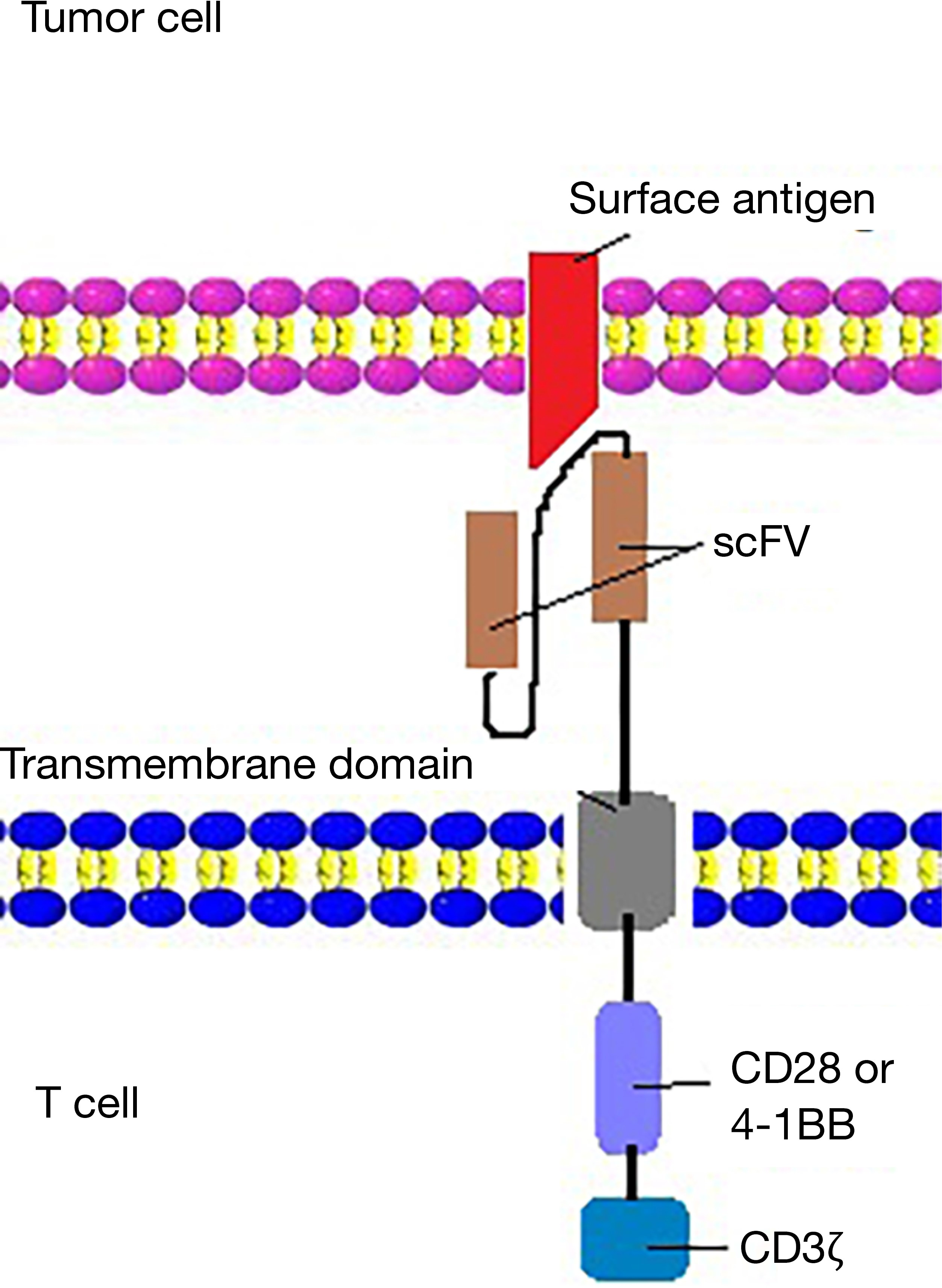 In this new but fast-developing field, many novel strategies of designing CARs are developed to improve the efficacy of CAR-T therapy. CRISPR/Cas9 genomic editing might provide a more effective strategy for the designing of CAR-T cell (40). Some studies have shown that the CRISPR gene-edited CAR T cells have higher antitumor activities than none-gene-edited CAR T cells (41). These evidences indicated that CRISPR/Cas9 genomic editing is a promising strategy in the modification of CAR T cells.

CRS, which is caused by excessive cytokine production, is usually typified by chills, fevers and other more severe life threatening reactions (44). Neurotoxicity caused by CD19-CAR T cells is usually manifest as delirium, somnolence and other severe cases such as seizures and/or stroke-like phenomena (45). CAR-modified T cell immunotherapy can be complicated by CRS and neurologic toxicity, which in most cases are manageable and reversible (46). Turtle et al. established that high CAR-T cell doses and tumor burden increase the risks of severe CRS and neurotoxicity (7). Indeed, cytokine elevation is directly correlated to tumor burden at the time of CAR-modified T cell infusions (9,47,48). The grade of CRS might be an important predictive marker for the infections in B cell malignancies patients treated with CAR-T cells (49).

alloHSCT, which offers advantages to confer long-term remission of B-cell malignancies, may influence the response rate of patients (50). alloHSCT is a therapeutic strategy to reconstruct normal hematopoietic and immune functions by removing tumor cells from patients and transfusing others’ hematopoietic stem cells back to them. Although it is unclear whether infusion of allogeneic CAR-modified T cells could improve outcomes after donor lymphocyte infusions, some studies have reported that allogeneic anti-CD19 CAR T cells could effectively treat B-cell malignancies that progress after alloHSCT (15,51).

To improve the therapeutic effect of CAR-T therapy on malignancies, many new progresses are being carried out. A suicide gene is encoded to ensure the safety of genetically modified cells by selective ablation adoptive transferred cells. Previous studies have indicated that incorporating the suicide genes into the CAR-T cells is a promising strategy to improve the efficacy of CAR-T therapy and lower the side effects by activating the inducible caspase-9 protein (59-61). Bispecific CARs with the engagement of two TAAs are designed to recognize the tumor cells in a better way (56). For example, it has been proved that CD20-CD19 bispecific CAR T cells may provide better efficacy of therapy than CD19-CAR T cell therapy (62). Recent studies have demonstrated that CRS and neurotoxicity are mainly caused by monocyte-derived IL-1 and IL-6 and intervention against IL-1 may successfully tackle both toxicities (63,64).

The combination of CAR-T therapy and other anti-tumor therapies provides a new way to improve the therapeutic effect, reduce the risk of tumor evasion and obtain better clinical outcome (65,66). Combined application of conditional chemotherapy and CAR-T therapy has been proven to be more effective than CAR-T therapy alone, providing strong rationales for combining CAR-T cell therapy with other anti-tumor approaches (67). Evidence has shown that the immune checkpoint blockade-based therapy could significantly enhance the efficacy of CAR-T cell therapy (68,69). The administration of PD-1 and PD-L1 blocking antibodies could increase the activity of CAR-T cells. However, its effect is transient and multiple administrations are still necessary to suppress tumor progression. To solve this problem, CAR-T cells were also genetically engineered to overexpress a PD-1 dominant negative receptor (PD-1 DNR), which lacks PD-1 transmembrane and intracellular signaling domains. The results indicated that PD-1 DNR augmented the efficacy of CAR-T cells and had more advantages over anti-PD-1 antibodies, such as long half-life and low toxicity (70). There are also other new strategies to block immune checkpoint in CAR-T cells, such as the generation of PD-1 deficient CD19-CAR T cells based on CRISPR/Cas9 gene editing technology (71,72).

In conclusion, CD19 CAR T cell therapy has produced distinct antitumor responses in the treatment of B cell malignancies. The rapid development of this field has provided many new strategies for improving the therapeutic effect of CAR-T therapy. The combination of CAR-T therapy and other therapies is a promising strategy for the treatment of cancer patients. To improve the efficacy of CAR-T therapy, the critical factors should be further determined and new strategies should also be developed to make these factors more beneficial.

Conflicts of Interest: All authors have completed the ICMJE uniform disclosure form (Available at http://dx.doi.org/10.21037/tcr-20-1044). The authors have no conflicts of interest to declare.