The frequency of minimally invasive (MIS) pancreatectomy has been increasing for both benign and malignant diseases. Among these surgeries, laparoscopic distal pancreatectomy (LDP) is the most accepted in the literature to date (1). Recent studies have demonstrated that the LDP approach is often recommended because of reduced blood loss and shorter hospital length of stay compared to the traditional open procedure (2,3). Furthermore, since the first robot-assisted pancreatic surgery was reported, approximately 200 robot-assisted distal pancreatectomies (RDPs) have been reported (4) with significant advantages of three-dimensional visual fields and highly flexible functions (5). Additionally, despite technical difficulties and concern for oncologic outcomes versus other approaches, the choice of an RDP or LDP approach for distal pancreatectomy has remained a controversial topic (6,7). A single-center retrospective study demonstrated that RDP is equally as effective and safe as conventional LDP, but RDP significantly reduced the risk of conversion to an open procedure even in the treatment of malignant diseases (8). Furthermore, the use of robots has also been reported to improve the spleen preservation (SP) rate compared to LDP (9,10). The spleen should be preserved as much as possible especially in the case of benign or borderline diseases because SP can offer patients other clinical benefits, such as lower morbidity and shorter hospitalization time (11). Hence, RDP has broadened the indications.

In addition, previous studies have focused on all diseases including PDAC and other malignant lesions which is not recommended in our department. Therefore, the primary objective of our study was to share the experience in our institution that RDP could improve the SP rate compared to LDP among patients with benign and low-grade malignant distal lesions of the pancreas. We present the following article in accordance with the STROBE reporting checklist (available at http://dx.doi.org/10.21037/tcr-19-2121).

A total of 176 patients who underwent RDP or LDP at Changhai Hospital from January 2011 to October 2018 were included in this study. The patient treatment flow diagram is shown in Figure 1. The indications of RDP/LDP for benign and low-grade malignant pathology are as follows: intraductal papillary mucinous neoplasm (IPMN); mucinous cystic neoplasm; symptomatic serous neoplasm; solid-pseudopapillary neoplasm; neuroendocrine neoplasm and pancreatitis. According to medical records (laboratory data and preoperative imaging findings), 67 patients received RDP while 109 patients were considered eligible for LDP. Both RDP and LDP were performed by experienced surgeons from the Department of Pancreatic Surgery, Changhai Hospital. Ten excluded cases were pancreatic ductal adenocarcinoma (PDAC). As a result, there were 63 cases of RDP and 103 cases of LDP. The clinicopathological and surgical outcomes were retrospectively compared between the two groups in an intention-to-treat analysis. The patients provided their informed consent before the surgery according to the rules and regulations of our institution. The study was conducted in accordance with the Declaration of Helsinki (as revised in 2013). Shanghai Changhai Hospital Ethics Committee approved the study and provided a certificate of exemption. 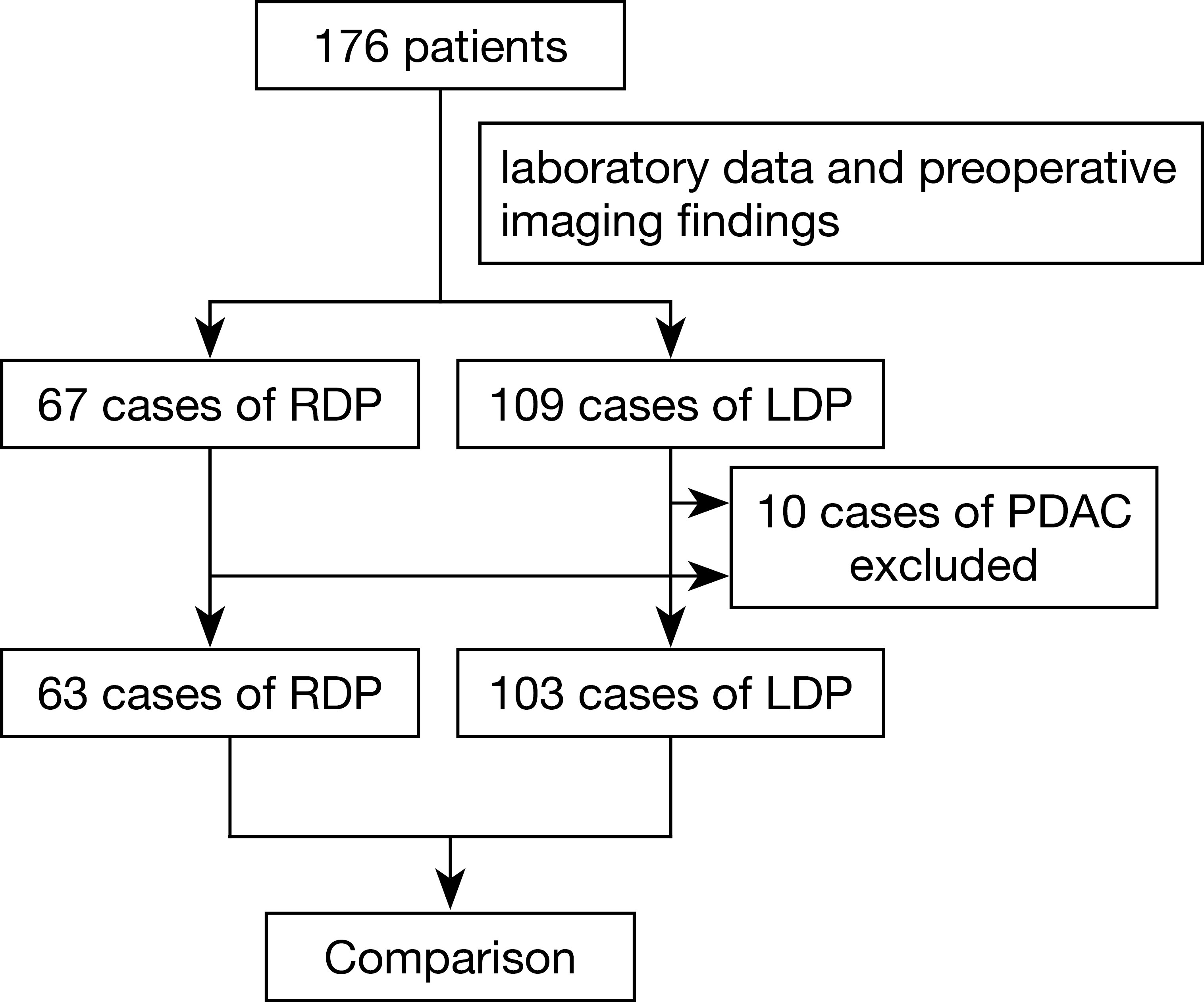 Figure 1 Flow chart of the patients.

All variables are presented as the mean and standard deviation. Student’s t-test was used when the data distribution was normal while the Mann-Whitney rank sum test was used for skewed variables. Proportions were compared using the Chi square test or Fisher’s exact test. Logistic regression was used for correlation analysis. All analyses were performed using the SPSS 21.0 software program. A P value of less than 0.05 was considered the threshold for statistical significance.

Most of the data were comparable between the two groups. As shown in Table 1, there were no significant differences in age, sex, BMI, white blood cell count, serum hemoglobin level, platelet, serum albumin level, total bilirubin, alanine aminotransferase or CA-199 between the two groups. Taken together, the baseline preoperative characteristics between the RDP and LDP groups were well matched (all P value >0.05). 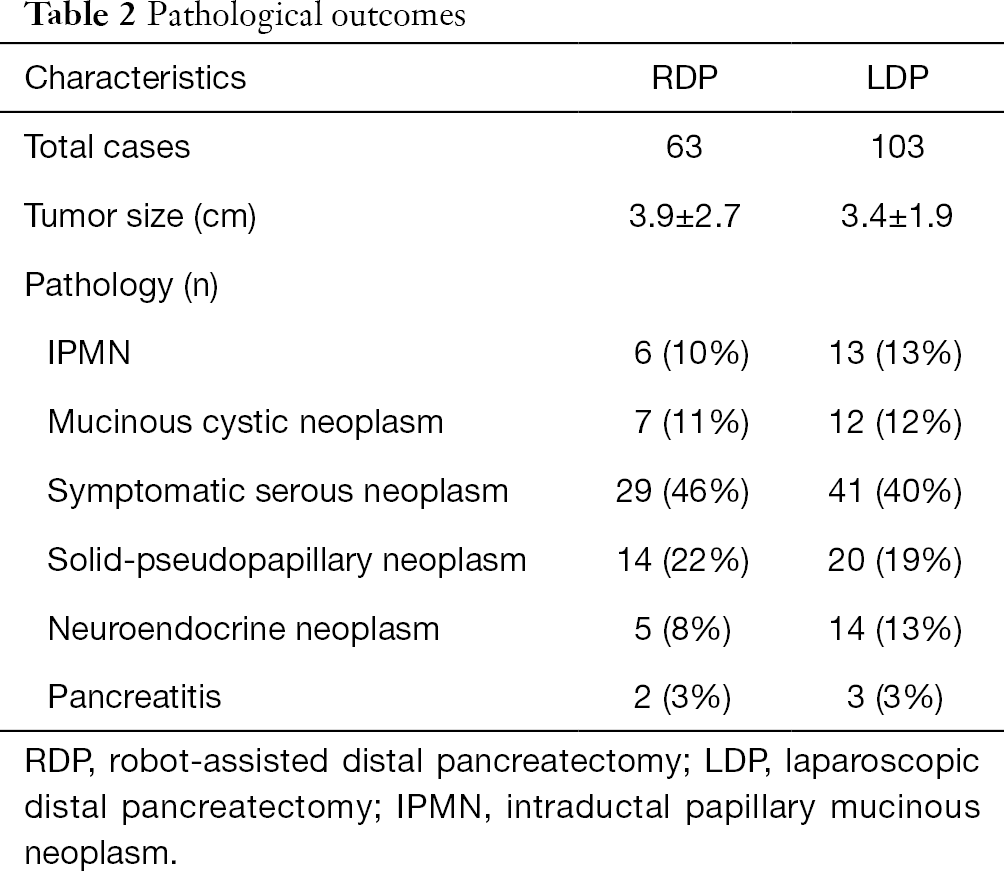 The key operative approach and intraoperative outcomes were not significantly different between the RDP and LDP groups with the exception of spleen preservation. The rate of spleen preservation in the RDP group (30.2% vs. 6.8%, P<0.001) was much higher. Additional intraoperative variables including operative time (149.2±49.8 vs. 150.0±50.2, P=0.922) and blood loss (167.3±166.7 vs. 188.4±195.7, P=0.481) were similar between both groups. On the other hand, 4 patients (6.3%) in the RDP group needed a blood transfusion, while the rate in the LDP group was 12.6%. Postoperative outcomes and complications are also listed in Table 3. There were also no deaths documented in the study group within 30 days after the operative procedure in both groups. According to the International Study Group (ISGPS) definition and grading of postoperative pancreatic fistula (POPF), the patients received POPF after surgery. Among these patients, grade A-type POPF occurred in 11 patients in the RDP group (27 patients in LDP group, P=0.193), while grade B-type POPF occurred in 3 patients (7 patients in the LDP group, P=0.843). None of the patients developed a grade C-type POPF. These results were not significantly different. Moreover, these patients experienced full recovery without reoperation. As a result, there were also no significant differences in hospital stay (6.0±3.0 vs. 6.4±2.5, P=0.404) between the RDP and LDP approaches while patients in RDP group needed to pay 30,000 RMB additional cost for the use of robot. 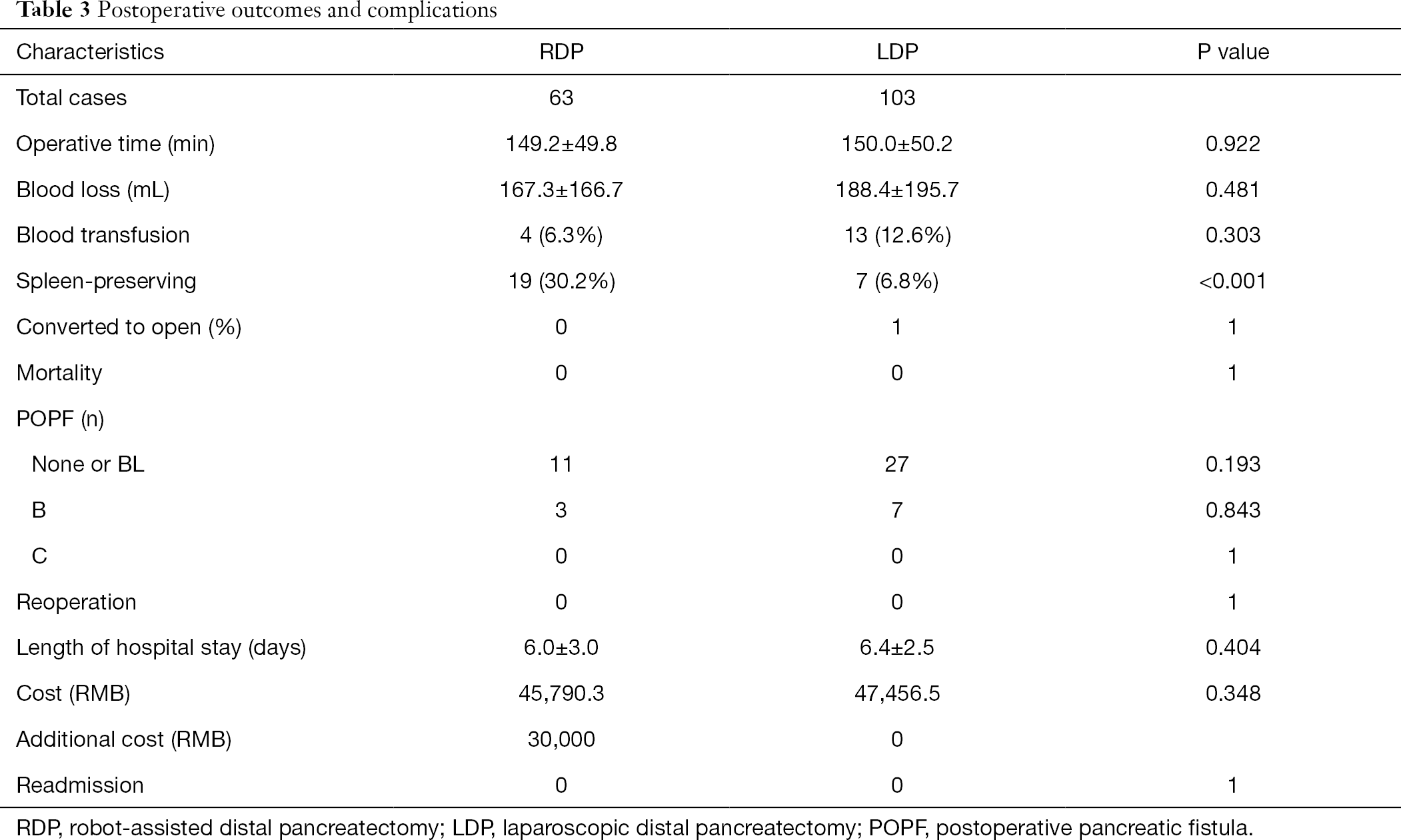 We then separated patients into the SP group and splenectomy group to evaluate whether patients could benefit from SP and determine the reason for spleen preservation. As shown in Table 4, the SP and splenectomy groups were similar in patient characteristics and laboratory data, while patients in the SP group showed a smaller tumor size (2.6±1.4 vs. 3.9±2.4 cm, P=0.005). However, there were no significant differences in operation time, blood loss, frequencies of pancreatic fistula or other postoperative variables, such as length of hospital stay. Furthermore, we analyzed the associations between clinical characteristics and SP using univariate logistic regression model. As demonstrated in Table 5, the univariate analysis confirmed that tumor size (<2 cm/≥2 cm) (hazard ratio HR, 7.255; 95% CI, 2.269–23.198, P=0.001) and surgery group (RDP/LDP) (hazard ratio HR, 0.125; 95% CI, 0.034–0.456, P=0.002) were associated with SP rate. Besides, multivariate analysis showed that small tumor size and RDP were significantly associated with higher SP. 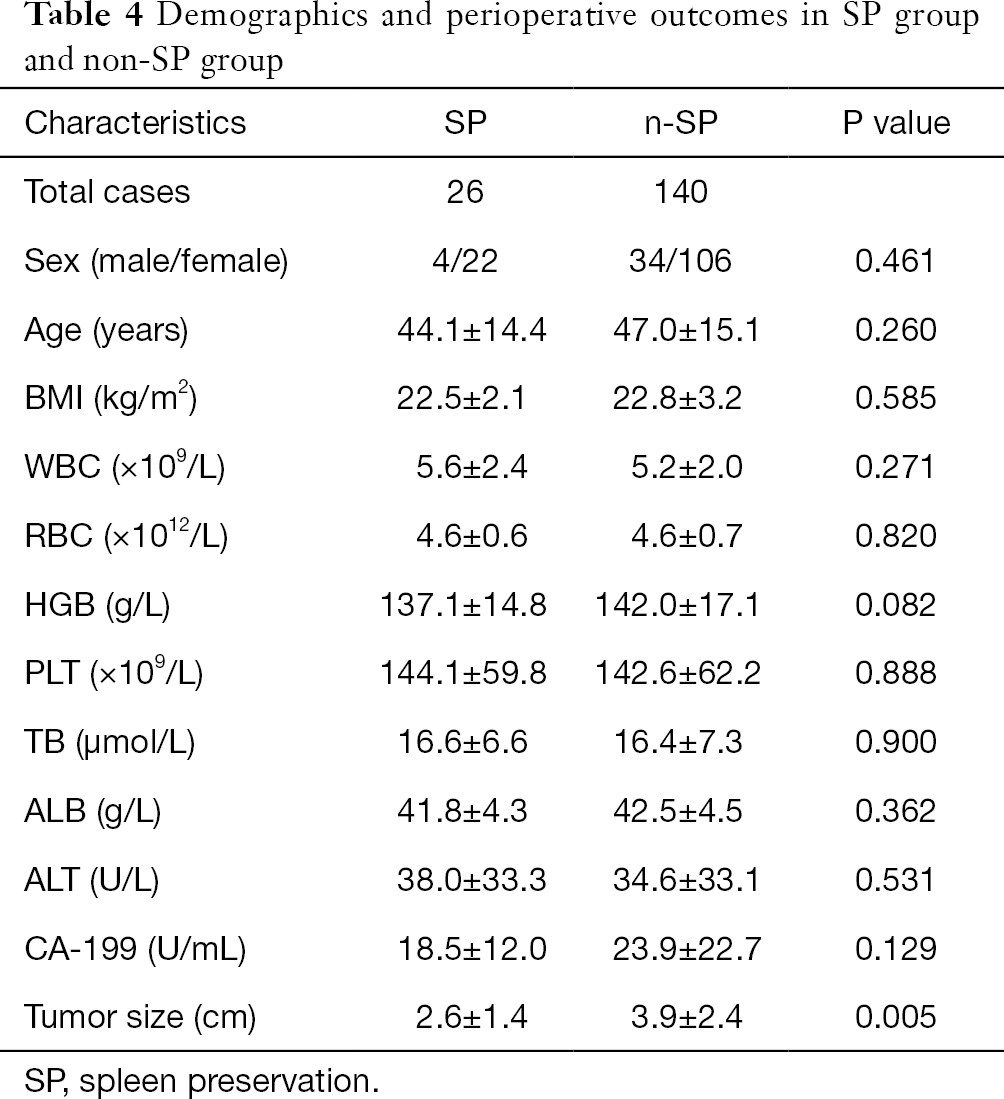 In our study, the RDP group showed a significantly higher SP rate (30.2%) than that of the LDP (6.8%) group in patients with benign and low-grade malignant distal lesions of the pancreas, while there were no differences in other clinical variables. Besides, tumor size and RDP were dependent factors for SP.

With continuous developments in techniques, it is possible and safe to apply LDP for patients, which is reported to obviously improve patient recovery compared to traditional open surgery (12). However, LDP still has several technical limitations, such as reduced freedom of motion and narrowed two-dimensional visualization which may impact the surgery results (6,13,14). Hence, robot-assisted surgery has developed to overcome these limitations with increased freedom and improved three-dimensional visualization. Because a small rupture of the splenic vessels can necessitate splenectomy (15-18), robot-assisted surgery is reported to greatly benefit patients, especially for improving SP rates (11,19,20). Furthermore, spleen preservation is highly recommended due to its advantages for immunity and hematopoiesis for patients with nonmalignant tumors (21).

Here, we retrospectively analyzed 166 patients in our institution, including 63 cases of RDP and 103 cases of LDP. Our results demonstrated that RDP improved SP rates in patients with benign and low-grade malignant distal lesions of the pancreas. Several key points in our surgical improvements were introduced as follows. First, as the PV is sometimes close to the pancreas or even growing in the distal of the pancreas, the spleen vein should be exposed at the pancreatic neck. We can dissect SMV and then find the PV along the SMV. This point can reduce the damage to IMV. Second, we can ensure that the PA is exposed on the upper edge of the pancreas before the pancreas is cut off. This procedure can reduce the damage to the PA. Third, we can fully dissect the lower margin of the pancreas to the spleen, which is beneficial for surgeons to handle accidental bleeding. Finally, the ligaments between the spleen and stomach can be reserved as much as possible to preserve the feasibility of implementing the Warshaw procedure. In conclusion, due to improved three-dimensional visualization and the advantages of suturing and knotting, surgeons can dissect vessels precisely and control excessive bleeding in a timely manner, which might preserve spleen in patients with appropriate tumor sizes.

It is obvious that the RDP approach has great advantages over the LDP approach in distal pancreatectomy. However, the difficulty of the RDP approach includes a learning curve and rich experience in open surgery. In addition, recent meta-analyses have demonstrated that the mean operation time in RDP and LDP was 247.8 and 229.9 min, respectively (22). Our results showed that the RDP group was not associated with longer operative times (149.2 vs. 150.0 min), which were much shorter than reported, because of accumulated surgical experience in minimally invasive techniques. Furthermore, RDP has obvious advantages in the invasion of large benign tumors into blood vessels, especially when repairing ruptured PV and PA. Bleeding control is one of the primary advantages of the robotic technique and previous studies have indicated that RDP resulted in less blood loss (9,10). In our study, there was no difference in blood loss (167.3 vs. 188.4 mL) between the two groups. Consistent with a recent study, RDP did not decrease the occurrence or severity of pancreatic fistula (23), or the severity of the pancreatic fistula rate. Notably, the POPF rate in our patients (22% in RDP group and 33% in LDP group) was also increased higher than reported (3% in RDP group and 12% in LDP group). The reason for the higher POPF rate is that the samples for the study are mostly benign or low-grade malignant lesions of pancreas. Their pancreatic secretion function is normal, and their structures are soft. In consideration of the “learning curve”, we anticipate that the RDP technique would improve bleeding control and reduce the rate of pancreatic fistula compared in a further study.

As a retrospectively study, it certainly has its limitations. As all patient demographics as well as intra- and postoperative outcomes were retrospectively collected, inherent selection bias is inevitable. Additionally, patients in RDP group are included since the robotic surgery is available in our center, so the learning curve with robot technology may influence the comparison results. In addition, as the financial burden of robotic procedures is reduced, we may conduct a randomized controlled trial to investigate the benefits of RDP over LDP.

Funding: The National Natural Science Foundation of China (No: 81572862) and Shanghai "Rising Stars of Medical Talent" Youth Development financially supported the design, collection, analysis and writing of the manuscript.

Reporting Checklist: The authors have completed the STROBE reporting checklist. Available at http://dx.doi.org/10.21037/tcr-19-2121

Conflicts of Interest: All authors have completed the ICMJE uniform disclosure form (available at http://dx.doi.org/10.21037/tcr-19-2121). The authors have no conflicts of interest to declare.

Ethical Statement: The authors are accountable for all aspects of the work in ensuring that questions related to the accuracy or integrity of any part of the work are appropriately investigated and resolved. All patients provided a written informed consent. The study was conducted in accordance with the Declaration of Helsinki (as revised in 2013). Shanghai Changhai Hospital Ethics Committee approved the study and provided a certificate of exemption.