Gastric cancer is one of the higher incidence cancers in gastrointestinal tumors, with obvious ethnic and geographical distributions (1). A total of 1,033,701 new cases were diagnosed in 2018, with an estimated 782,685 deaths, or 5.7% of the total number of cancer cases, accounting for 8.2% of total cancer deaths (1). More than 70% of new cases and deaths occur in developing countries, particularly in East Asia, Eastern Europe and South America (1). In China, a total of 405,000 new cases were diagnosed in 2012, with an estimated death toll of 325,000 cases (2). For patients with removable gastric cancer, the prognosis is poor, the overall survival rate is 5 years, about 20–30% (3). Previous studies have shown that the prognostic factors identified were infiltration depth, lymph node metastasis, pathological types during tumor nodule metastasis (TNM), and whether to undergo postoperative treatment or not (4). However, some studies have shown that patients have heterogeneous clinical outcomes even at the same stage of the tumour.

This means that further research should be carried out to find more prognostic factors, screening patients with poor prognosis, who need stronger treatment. Tumor markers are defined as compounds produced by tumors or hosts in response to malignant neoplasms. They play an important role in cancer diagnosis, prognosis, treatment, and monitoring and have been widely used because of their inviolability and convenience. In recent years, CEA, CA125, CA19-9 and AFP have been widely used in gastric cancer. Some studies have reported that serum tumor marker levels can predict early and late prognosis in patients with gastric cancer stage (5,6). Some studies have shown that single tumor markers can evaluate the therapeutic effect (7), and other studies have shown that comprehensive analysis of a variety of tumor markers for the diagnosis, prognosis and treatment of gastric cancer has a more important significance for patients (8). However, most studies focus only on the value of tumor markers at a given time and do not care about the effect of changes in tumor markers on the prognosis of patients with gastric cancer.

The purpose of this study was to evaluate the changes of CEA, CA125, CA19-9 and AFP before and after Phase III operation in gastric cancer phase II–III. We present the following article in accordance with the REMARK reporting checklist (available at http://dx.doi.org/10.21037/tcr-19-2427).

The study was conducted in accordance with the Declaration of Helsinki (as revised in 2013). The study was approved by medical ethics committee of Zhejiang Cancer Hospital [No.: IRB-2020-152 (Ke)] and informed consent was taken from all the patients. This study is a retrospective review. Between January 2012 and December 2012, 105 patients at Zhejiang Cancer Hospital underwent D2 lymph node dissection, with a deadline of December 31, 2017 for data collection. Each patient has a histological diagnosis of adenocarcinoma. According to the 7th edition of AJCC staging, the postoperative pathological staging of all patients was II-III period. Each patient received more than 4 cycles of adjuvant chemotherapy, including S-1 single drug or XELOX, SOX combined drugs. Serum samples of tumor markers, including CEA, CA125, CA19-9 and AFP, were performed in each patient within 3–4 weeks before and after surgery. At the time of recruitment, personal data on the clinical characteristics of each patient, including age, gender, differentiation, tumor location, wall infiltration depth, lymph node metastasis, vascular infiltration and pathological tumor-node metastasis (pTNM) stage and collection of survival information from clinical records or family contact. The overall survival rate (OS) is defined as the time from diagnostic data to death or last access. Serum CEA, Ca19-9, CA125 and AFP levels were detected by electrochemical luminescence (ECL) (Abbott Laboratory, USA). As recommended by the manufacturer, the cutoff levels for CEA, CA125, CA19-9 and AFP are 5.0 ng·mL–1, 35.0 U·mL-1, 37 U·mL-1, and 8.1 ng·mL-1. When the labeled serum level is higher than the critical value, the results are considered positive. Positive combined detection of four tumor markers is defined as one or more tumor markers that exceed the cutoff level. The data were analyzed using SPSS version 13.0. The continuous variables are represented by mean ± SD, and t-test and chi-squared Square test are used for comparison between the two groups. The predictive effect of each variable on survival was calculated by using Kaplan-Mayer method and logarithmic grade test. A P value of less than 0.05 is considered statistically significant. 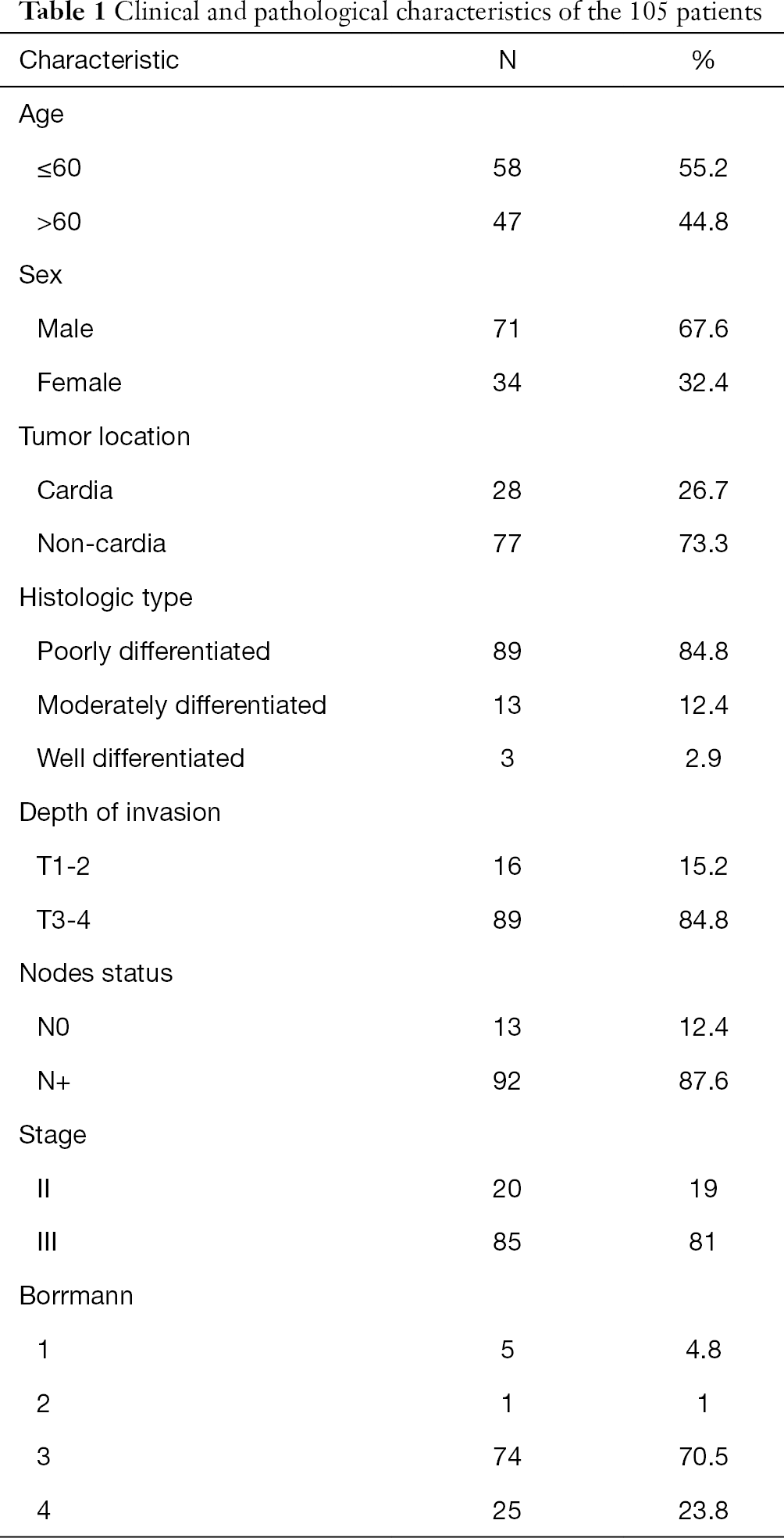 The relationship of preoperative serum TM status with Clinicopathologic characteristic CEA, CA125, CA19-9 and AFP before surgery were above the cutoff levels in 16.2%, 21%, 22.9% and 8.6% cases, respectively. A total of 56 people (53.3%) showed positive for one or more tumor markers. Table 2 shows the relationship between preoperative levels and different clinicopathological parameters in each or combination of tumor manufacturers. Preoperative serum positive levels were 16.2%, 21%, 22.9% and 8.6%, respectively. There were 56 (53.3%) patients who sowed positive for one or more tumor makers. CEA is more frequent in older patients (P=0.019), differentiation (P=0.012) patients and patients without lymph node involvement (P=0.002). Ca19-9 had a positive frequency in patients with advanced tumor stage (P=0.035). The positive levels of combined detection were related to the higher degree of tumor infiltration and advanced tumors (P=0.014 and P=0.048). 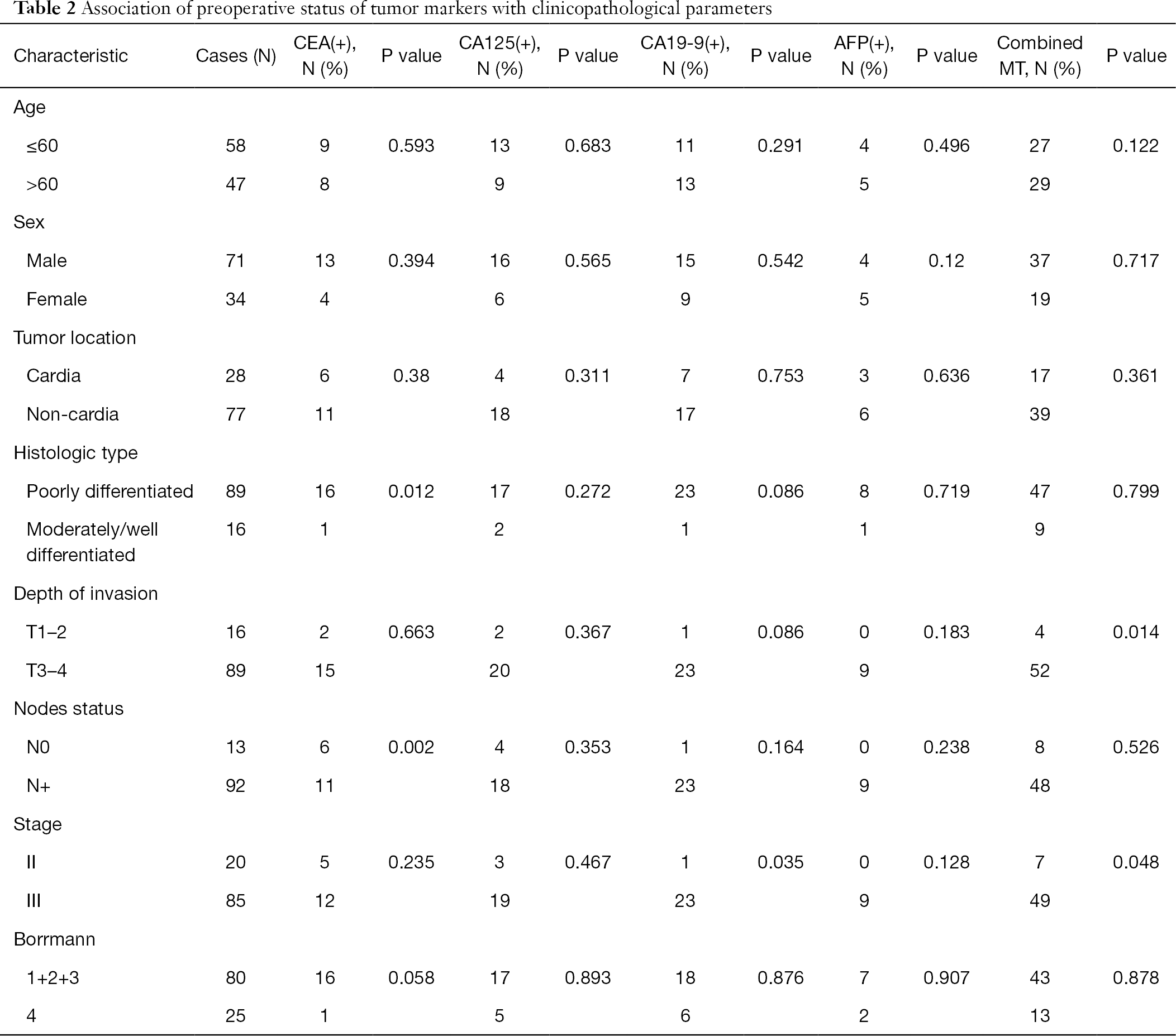 The relationship of preoperative serum TM status with OS 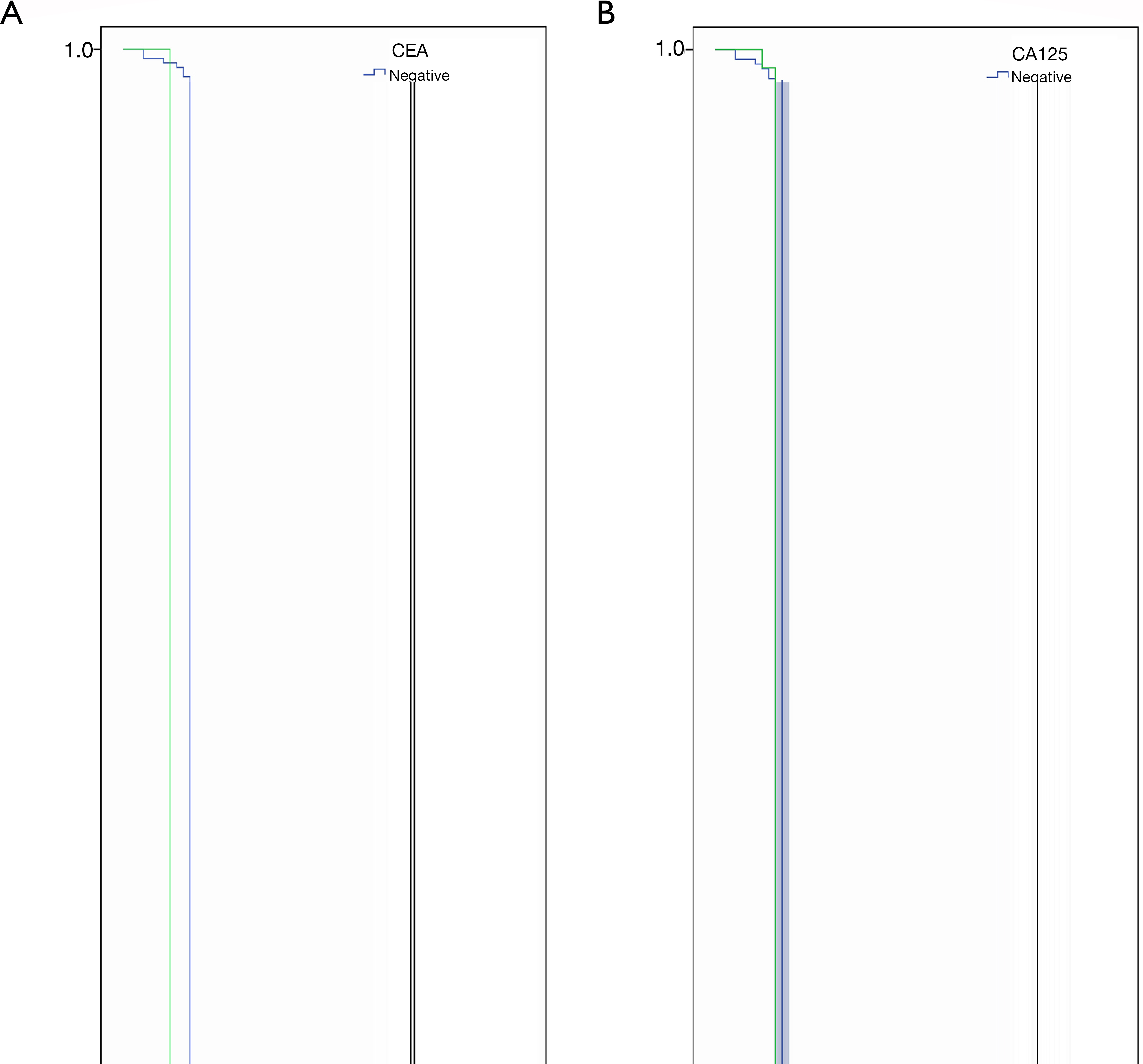 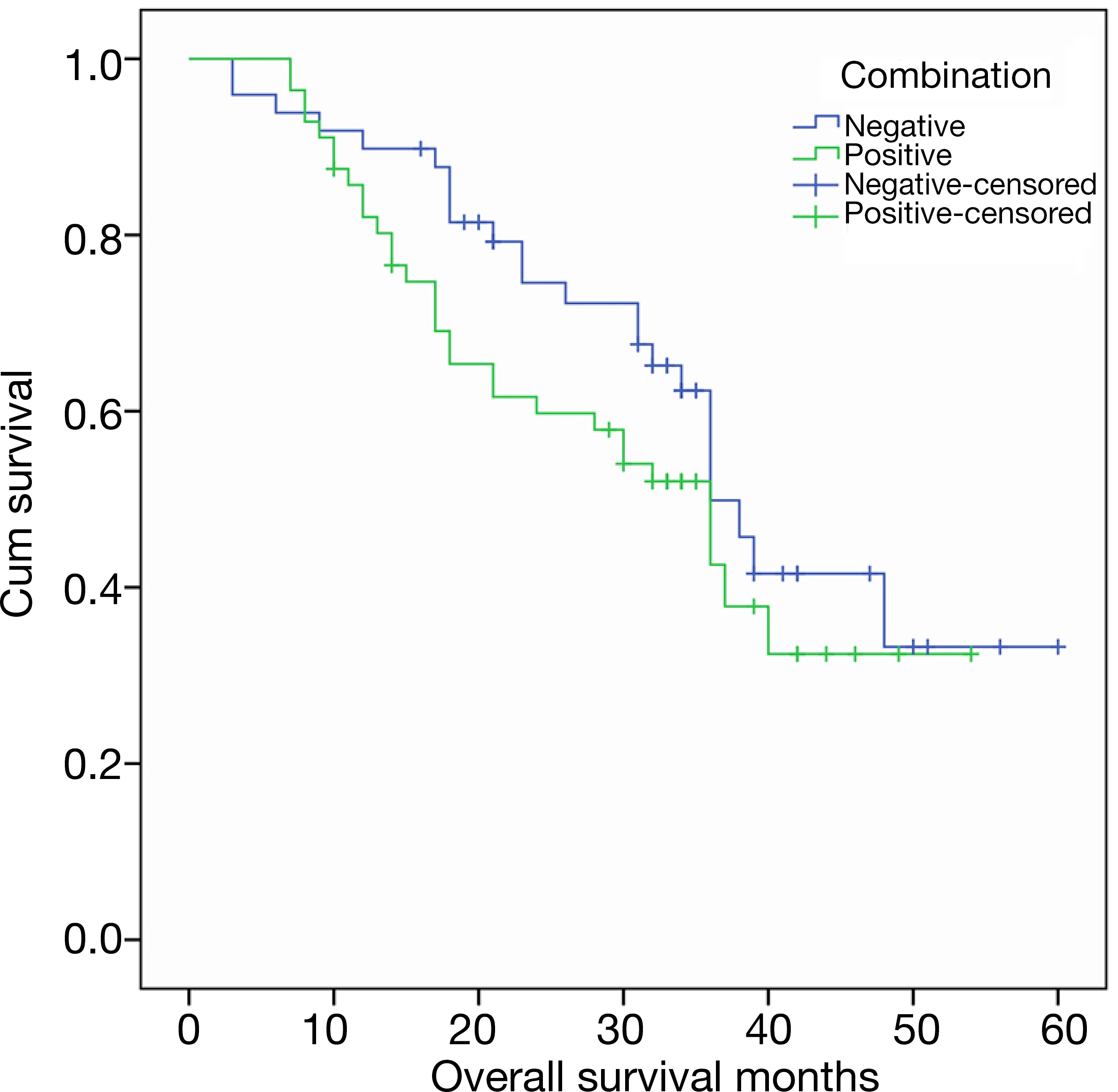 Figure 2 Survival curves of patients according to combination of CEA, CA125, CA19-9, and AFP preoperation serum positivity. The difference between all-negative patients and more one of tumor makers positive patients was not statistically significant (P=0.219). 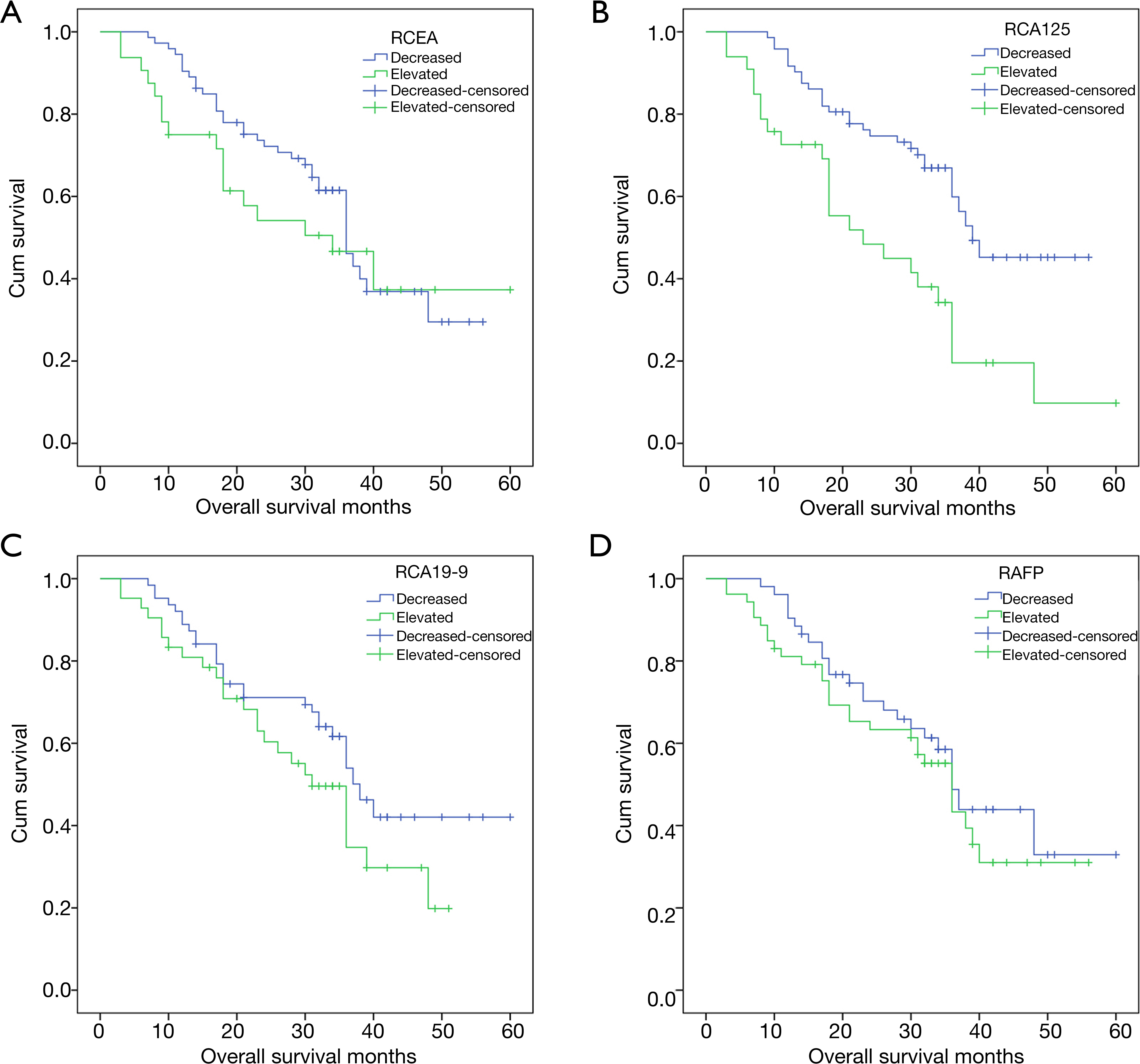 High incidence of gastric cancer, high mortality rates and limited treatment options remain a major health problem worldwide (1). The relative survival rate of five years of age standardization was reported to be 27.4% (95% CI: 26.7–18.1%) in 2003–2005 based on population-based cancer registration data in China (9). In this study, the 5-year survival rate of two stage III gastric cancer patients was 49.5%, which was better than the national data. Most of the patients in this study came from developed regions and received D2 lymph node dissection, followed by more than 4 cycles of adjuvant chemotherapy, including S-1 single-drug or capecitabine and oxaliplatin or S-1 and oxaliplatin combined in our hospital.

Serum tumor markers were simple to detect, non-invasive, the measurement process was mature and the repeatability was good. They are considered to be monitoring markers for tumor prognosis and treatment evaluation. In this study, the prognostic value of CEA, CA125, CA19-9 and AFP changes before and after operation in phase two Stage III gastric cancer patients was discussed. Previous studies have reported that serum levels in the serum of patients with gastric cancer, such as CEA, CA125, CA19-9 and AFP, were elevated not only at an advanced stage, but also in the early stages. The positive rate of pretreatment of tumor markers is different in previous studies. CEA positive rates are usually between 15.8% and 57.6%, CA125 between 18.2% and 53.9%, CA19-9 between 19.1% and 50%, AFP between 5.4% and 11.8% (16-18), and our findings on the percentage of positive markers are in these Within the range (CEA: 16.2%; CA125: 21.0%; CA19-9: 22.9%; and AFP: 8.6%), our research positive rate is at a lower level because there is no transfer of patients in our research. As mentioned earlier, serum CEA levels are associated with tumor depth, lymph node involvement (19). Feng’s research shows that the increase in CEA levels is an independent risk factor for the poor prognosis of early gastric cancer (6). A meta-analysis showed that CEA protein and mRNA levels in peritoneal lavage were associated with peritoneal recurrence after radical gastrectomy (20). In order to understand the correlation between the pretreatment status of tumor markers and different clinicopathological parameters, we conducted a chi-square test and found that CEA positive was related to differentiation level and lymph node involvement. Previous studies have confirmed that the preoperative positive serum of CA125 is associated with poor prognosis in patients with gastric cancer (21). Kim and others proved that in 679 patients undergoing resection, the serum CA125 value was an independent prognostic risk factor, and the risk rate of recurrence of gastric cancer was 2.431 (22).

However, no link was found between CA125 levels and clinicopathological features. Previous studies have reported that patients with high levels of serum CA19-9 before surgery are much more likely to exhibit lymphatic infiltration, perineal infiltration, advanced tumors and recurrence than patients with normal preoperative serum CA19-9 levels (23,24). A meta-analysis of 11,408 patients with gastric cancer showed that elevated serum CA19-9 levels were associated with low levels of prognosis (25). Our findings confirm that it is associated with advanced tumor periods. Elevated AFP levels are more likely to show liver metastasis and poor gastric prognosis cancer (26,27), according to reports. However, in our study, no link was found between AFP levels and Clinicopathological features. We also found that the positive detection of four tumor markers was related to the improvement of tumor infiltration degree and the advancement of tumor staging.

Contrary to these studies, in this outcome, we found a trend in preoperative CEA, CA125, CA19-9 and AFP, and even combined detection as a prognostic factor in the second to III phases of gastric cancer, but without statistical significance. The possible reason is that all patients in the study underwent D2 lymph node dissection and more than 4 cycles of adjuvant chemotherapy, including S-1 single drug or capecitabine and oxaliplatin or S-1 and oxaliplatin combined drugs, which can alter and improve the prognosis of these patients. The clinical evaluation of the changes of CEA, CA125, CA19-9 and AFP before and after operation in these patients was analyzed. We found that elevated postoperative CA125 was associated with poor OS in stage II-III GC patients. This is because the increase in CA125 is associated with peritoneal metastasis (5,28), and the prognosis of patients with peritoneal metastasis is worse than that of liver, lung and other metastases (29). The peritoneum is the most common site for metastasis and recurrence in patients with gastric cancer (30).

In order to improve the OS of these patients, whether or not patients with elevated postoperative CA125 need stronger adjuvant chemotherapy, or even intraperitoneal chemotherapy, this requires further study of more accurate research.

In this study, prejudice is inevitable due to some potential limitations. This retrospective study was conducted in a single institution and did not take into account a number of potential common factors related to tumor makers in all analyses. Our results need more evidence to support it. In summary, postoperative CA125 elevation was associated with poor OS in two-III GC patients. Larger, forward-looking and randomized studies are needed to confirm these findings.

We thank all the clinical investigators of the selected studies and patients involved in these studies.

Funding: This work was supported by the Zhejiang Science and Technology Office Project Foundation, no. 2016KYA050.

Reporting Checklist: The authors have completed the REMARK reporting checklist. Available at http://dx.doi.org/10.21037/tcr-19-2427

Conflicts of Interest: All authors have completed the ICMJE uniform disclosure form (available at http://dx.doi.org/10.21037/tcr-19-2427). The authors have no conflicts of interest to declare.

Ethical Statement: The authors are accountable for all aspects of the work in ensuring that questions related to the accuracy or integrity of any part of the work are appropriately investigated and resolved. The study was conducted in accordance with the Declaration of Helsinki (as revised in 2013). The study was approved by medical ethics committee of Zhejiang Cancer Hospital [No.: IRB-2020-152 (Ke)] and informed consent was taken from all the patients.