Hepatocellular carcinoma (HCC) was the sixth most commonly diagnosed cancer and the fourth leading cause of cancer deaths worldwide in 2018, with approximately 841,000 new cases and 782,000 deaths annually. In addition, the incidence and mortality rates were four times higher than those estimated among men in China (1). conventional transarterial chemoembolization (cTACE) and drug-eluting beads transarterial chemoembolization (DEB-TACE) have been widely accepted as options treatment for unresectable HCC (2).

The major complications after TACE are liver rupture, liver abscess, femoral artery pseudoaneurysm, cholecystitis, biloma, pulmonary embolism, cerebral lipiodol embolism, tumor lysis syndrome (TLS), partial intestinal obstruction, and gallbladder perforation (3). Among these major complications, TLS is easily neglected and may be fatal. It most commonly occurs after chemotherapy in high-grade, rapidly proliferating treatment-sensitive tumors, such as Burkitt’s lymphoma. Only several cases of TACE-associated TLS have been reported in literature to date. The two cases of TLS reported in the present study have their symptoms and treatment specifically introduced. We present the following article in accordance with the CARE reporting checklist (available at http://dx.doi.org/10.21037/tcr-20-1158).

A 41-year-old man suffered from dull pain for about 3 months, for which an abdominal computed tomography (CT) showed a 17-cm hepatic tumor in the right lobe with contrast enhancement in the arterial phase and washout in the venous phase without evidence of portal vein thrombosis was noted. Preoperative portal venous embolization (PVE) plus TACE were planned to decrease the tumor burden and promote liver remnant hypertrophy. He was categorized as Child Class A (Child-Pugh score =6). One day after TACE, the patient developed acute renal insufficiency and liver dysfunction. Contrast-induced acute renal failure was suspected in the beginning, however, his symptoms did not improve following adequate resuscitation. Three days after TACE, the patient developed symptoms of high fever and oliguria with elevations of laboratory investigations aminotransferase, bilirubin, uric acid, creatinine, and lactic dehydrogenase levels were noted (Table 1). TLS with acute kidney injury was subsequently diagnosed. The patient’s renal and liver functions gradually improved after hemodialysis (4th day after TACE, for 25 days) and adequate hydration (3,000 mL/m2/d). The patient made a satisfactory recovery on day 40 after TACE, though left lobe hypertrophy after PVE was observed. He was then discharged after undergoing hepatectomy.

Table 1 Serial laboratory data before and after TACE
Full table

A 57-year-old man was admitted to our hospital via outpatient clinic after presenting with abdominal dull pain and decreased appetite. On admission, a CT scan of the abdomen found a large tumor palpable in the upper abdomen (largest 17.3 cm × 18.4 cm). Laboratory investigations showed an alanine aminotransferase (ALT) of 11.7 IU/L, total bilirubin of 1.0 mg/dL, creatinine of 66 ng/mL, uric acid of 301.2 ng/mL and alpha-fetoprotein of 334 ng/mL. He was categorized as Child Class A (Child-Pugh score =6). DEB-TACE was suggested as the treatment of choice after discussion with the hepatobiliary team, and 300–500 µm DC Beads (Biocompatibles, Farnham, United Kingdom) were selected and loaded with the chemotherapy drug, epirubicin, which was followed by gelatin sponge particles in order to completely embolize the tumor vessels. The team’s previous experience gave clues into encountering TLS in such a situation, which encompassed performing complex treatment such as adequate hydration, alkalization of urine as well as zyloprim in preventing TLS. Unfortunately, the patient developed symptoms of high fever and renal insufficiency 2 days after TACE. His laboratory profile was checked for TLS immediately. Hyperuricemia (1,041.4 µmol/L), potassium (6.39 mmol/L) and hypocalcemia (2.01 mmol/L) were subsequently noted, and TLS was diagnosed. The patient’s vital signs (heart rate, blood pressure, respiratory rate, urine volume), blood electrolyte level (sodium, potassium, calcium, phosphorus), renal function and blood uric acid level were monitored every 6 hours in the first 24 hours of developing TLS, and was then monitored every day. After treatment using rasburicase (0.2 mg/kg, ivgtt, for 11 days), adequate hydration (3,000 mL/m2/d), diuresis (maintaining urine volume ≥100 mL/m2/h) and correcting the electrolyte disorder (hyperkalemia, hyperphosphatemia and hypocalcemia), the patient’s symptoms improved dramatically. Finally, he was discharged 16 days after TACE without any other complications.

TLS was first reported in 1929 and is due to a series of complications caused by the rapid release of intracellular contents and their metabolites into the blood following the rapid dissolution of tumor cells, essentially manifested by electrolyte disorders and metabolic abnormalities. It is characterized by the development of acute kidney injury and other metabolic abnormalities including hyperuricemia, hyperkalemia, hypocalcemia and hyperphosphatemia after effective treatment (4). Hyperuricemia is caused by purine degradation and can lead to precipitation of uric acid crystals in the kidneys’ collecting tubules, resulting in obstructive nephropathy. Moreover, hyperkalemia following potassium effusion from the cytoplasm, may lead to cardiac arrhythmias and arrest. Therefore, TLS can lead to acute kidney failure and is life-threatening. TLS occurs mostly in patients with blood-borne malignancies such as Burkitt’s lymphoma acute lymphocytic leukemia and high-grade non-Hodgkin’s lymphoma following chemotherapy. In addition, TLS can also occur in certain metastatic solid tumors, such as breast cancer, gastrointestinal cancer, neuroblastoma and small cell lung cancer, though its incidence is relatively low. The main factors leading to TLS include: (I) tumor size, growth rate and sensitivity to chemotherapy; and (II) the basic condition of patients, such as dehydration and renal insufficiency, which may lead to a reduction in the clearance rate of cell metabolites (5). TLS is a rare complication of solid organ tumor treatment as these cancers are generally resistant to cytotoxic therapies. Furthermore, the mortality rate in such patients is higher due to delayed diagnosis (6,7).

TACE has been widely accepted as a choice of treatment for advanced HCC and hepatic metastases and has been considered to be an effective treatment modality compared to other methods (2,3). However, TACE possesses various complications, including liver dysfunction, liver abscess, liver rupture, biliary tract injury, renal failure, necrotizing pancreatitis, cerebral lipiodol embolism, and hepatic encephalopathy (8). Besides, TLS is a very rare and easily neglected complication that may occur following TACE. Since 1998, after treatment of HCC, 25 cases of TLS after treatment have been reported in English literature (Table 2), which consist of 15 cases that occurred following TACE/transcatheter arterial embolization (TAE), of which the mortality rate was 40% (6/15) (8-15). The most common cause for acute renal insufficiency is radiocontrast-induced. It is much more common than that induced by TLS, but it also an early clinical sign of TLS. According to the Cairo-Bishop classification (Table 3), the diagnostic criteria of TLS are mainly based on laboratory investigations (16). For high-risk cases after TACE, once the patient has developed acute renal insufficiency, laboratory tests should be promptly performed in order to diagnose TLS and encompass levels of serum potassium, uric acid, calcium, phosphate, lactate dehydrogenase and renal function. 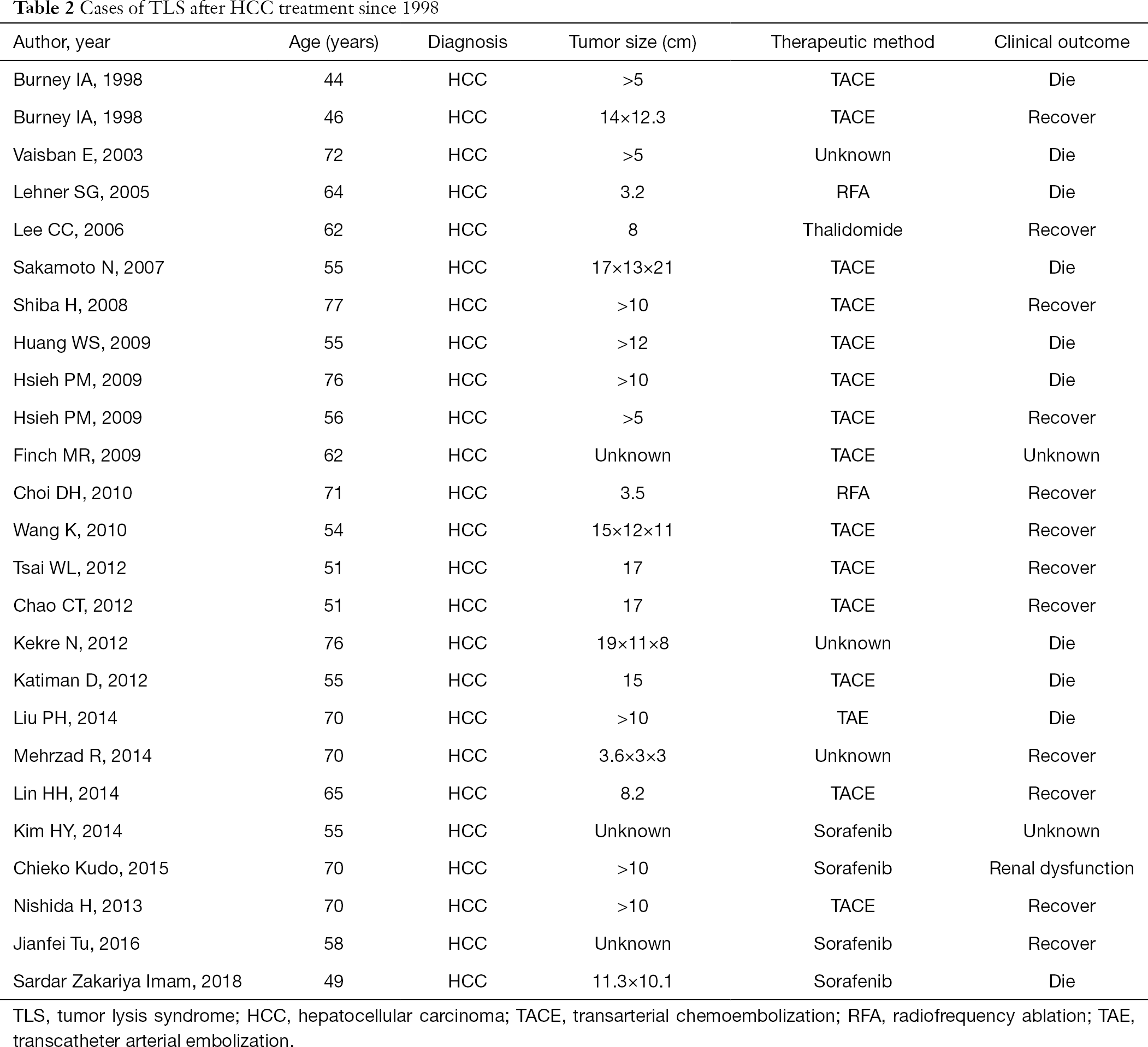 The early stratification of patients for TLS is critical in its effective prevention and treatment. In 2010, an expert consensus panel on TLS developed guidelines for risk stratification and associated TLS prophylaxis recommendations (17). Factors included tumor bulk and stage, large area of tumor necrosis after therapy, renal dysfunction prior to therapy, exposure to nephrotoxic agents, as well as baseline elevations in phosphorus, potassium, and uric acid (18), as well as the two present cases regarding TACE-induced TLS, the patients had large HCC (>5 cm in size) tumor sizes and baseline renal functions within normal limits. The main principles in treating TLS include hydration, correction of metabolic abnormalities, and treatment of acute renal failure (5).

Early recognition and treatment can reduce the mortality rates of TLS. Hemodialysis should be actively used when medications fail to correct metabolic abnormalities, renal insufficiency with associated oliguria/hyperhydration, or uremia (19). The mortality of TLS after TACE is very high (40%), however, the two patients in this study were successfully treated, achieving satisfactory results. Clinical outcomes depended on the cooperation of our team, timely diagnosis and timely treatment. Particularly, for the first patient, dialysis was carried out as soon as the patient was oliguric, which served as the most important factor in the patient’s eventual recovery. Following 40 days of treatment, the patient was finally discharged. Certain limitations exist in the treatment of the two patients. Partial embolization may have prevented TLS; due to our inadequate understanding of TLS, the first patient was not given adequate preventive measures during the perioperative period. The second patient received DEB-TACE since the tumor necrosis rate may have been higher compared to cTACE. Additionally, high-risk factors were present for TLS, such as the tumor size being larger than 5 cm. Due to the clinicians’ experience with the first patient, appropriate preventive measures were given to the second patient. Consequently, after a short period of treatment, the patient recovered. Furthermore, during treatment, the use of Fasturtec may have also played a certain role in the treatment’s efficacy.

TLS may have developed after TACE in the presently reported high-risk patients. Measures should be taken to prevent TLS prior to performing TACE. Laboratory indexes should be examined in a timely manner. Once the TLS is diagnosed, prompt treatment of metabolic abnormalities, including administration of allopurinol and sodium bicarbonate along with adequate hydration should be performed.

Reporting Checklist: The authors have completed the CARE reporting checklist. Available at http://dx.doi.org/10.21037/tcr-20-1158

Conflicts of Interest: All authors have completed the ICMJE uniform disclosure form (available at http://dx.doi.org/10.21037/tcr-20-1158). The authors have no conflicts of interest to declare.

Ethical Statement: The authors are accountable for all aspects of the work in ensuring that questions related to the accuracy or integrity of any part of the work were appropriately investigated and resolved. All procedures performed in studies involving human participants were in accordance with the ethical standards of the institutional and/or national research committee(s) and with the Helsinki Declaration (as revised in 2013). Written informed consent was obtained from the patient.