Intensity-modulated radiation therapy (IMRT) is widely used due to its advantages. Despite its positive benefits, however, skin damage to superficial tissues or organs after irradiation has drawn increasing attention. Although several studies have confirmed that IMRT causes acute radiation-induced dermatitis (RID), most were limited to head and neck tumours, as well as breast cancer (1-3). Researchers believe that late RID after radiotherapy, which leads to decrustation and fibrosis, may be associated with acute RID. Furthermore, RID caused by IMRT seriously affects quality of life (4-6). However, among gynaecological malignancies, RID caused by radiotherapy has scarcely been reported. When IMRT is applied to treat the region including the lower vagina and/or inguinal lymph nodes, acute RID of varied severity usually occurs (7). However, the incidence of such common complications and treatments regarding acute RID remains unclear. Once patients experience severe acute RID, radiotherapy must be interrupted (8), resulting in prolonged length of hospital stay, which in turn may lead to treatment failure (9,10). Traditionally, treatment of acute RID usually consists of supportive management of its symptoms. The benefits of triethanolamine emulsion for preventing acute RID remain controversial. Several studies have confirmed that triethanolamine emulsion may help to prevent acute RID, while other investigations have not drawn the same conclusion. Therefore, the incidence, risk factors, and most efficient treatment for acute RID is of significant concern in patients with gynaecological malignancies who undergo IMRT.

This retrospective study aimed to analyse the incidence of and risk factors for acute RID in gynaecological malignancies in patients undergoing IMRT, and to explore the role of triethanolamine emulsion in the prevention of acute RID. We present the following article in accordance with the STROBE reporting checklist (available at http://dx.doi.org/10.21037/tcr-20-796).

Patients diagnosed with gynaecological malignancies, who underwent lower vaginal and/or inguinal IMRT between January 2012 and June 2014 at the Zhejiang Cancer Hospital (Hangzhou, Zhejiang Province, China), were enrolled, including those with cervical cancer with lower-third vagina invasion, vaginal cancer with lower vagina invasion, and vulvar cancer with inguinal node invasion. All malignancies were confirmed by pathology. The study was conducted in accordance with the Declaration of Helsinki (as revised in 2013). And it was approved by the Zhejiang Cancer Hospital Ethics Committee (Reference number, IRB-2018-91), with informed consent taken from all the patients.

IMRT was used for external irradiation of the pelvic cavity, and the entire vagina and groin. The X-ray radiation energy was 10 MV, and the total dose was 45–46.4 Gy, which was applied in fractional doses of 1.6–1.8 Gy. For metastatic inguinal lymph node(s) confirmed by pathology, the nodal dose was boosted to 54–60 Gy. The maximum dose to the skin was limited to 50 Gy. During external irradiation, patients were positioned supine for IMRT with closed legs, and without any tissue compensation. After external irradiation, patients with cervical cancer and/or vaginal cancer were treated with high-dose brachytherapy. The synchronous chemotherapy regimens included the following:

Triethanolamine emulsion (Biafine, Laboratoire Medix, Buc, France) was applied to the inguinal and vulvar skin three times per day, starting from the first day of radiotherapy to the conclusion of radiotherapy.

Characteristic data, including age, body height and weight, hyperglycaemia, tumour stage and pathological data, were collected. Hyperglycaemia was defined as venous fasting blood glucose level ≥7.1 mmol/L for 2 consecutive measurements. Body mass index (BMI) was calculated based on height and weight. Meanwhile, treatment data were recorded, including dose of radiotherapy, radiation boost, synchronous chemotherapy, and its specific regimen. Moreover, prophylactic use of the triethanolamine emulsion and severity of RID were analysed. The severity of acute RID was classified into 5 grades according to the Radiation Therapy Oncology Group (RTOG) criteria (11). Acute skin toxicity in the inguinal and valvular area were recorded. Of all grades of skin toxicity during the treatment, the most serious was graded.

All statistical analyses were performed using SPSS version 19.0 (IBM Corporation, Armonk, NY, USA). Continuous data are expressed as mean and standard deviation, and the categorical data are expressed as frequency and percentage. The χ2 test was used to compare acute skin toxicity between different groups. A logistic regression model was adopted for multivariate analysis; differences with P<0.05 was considered statistically significant. 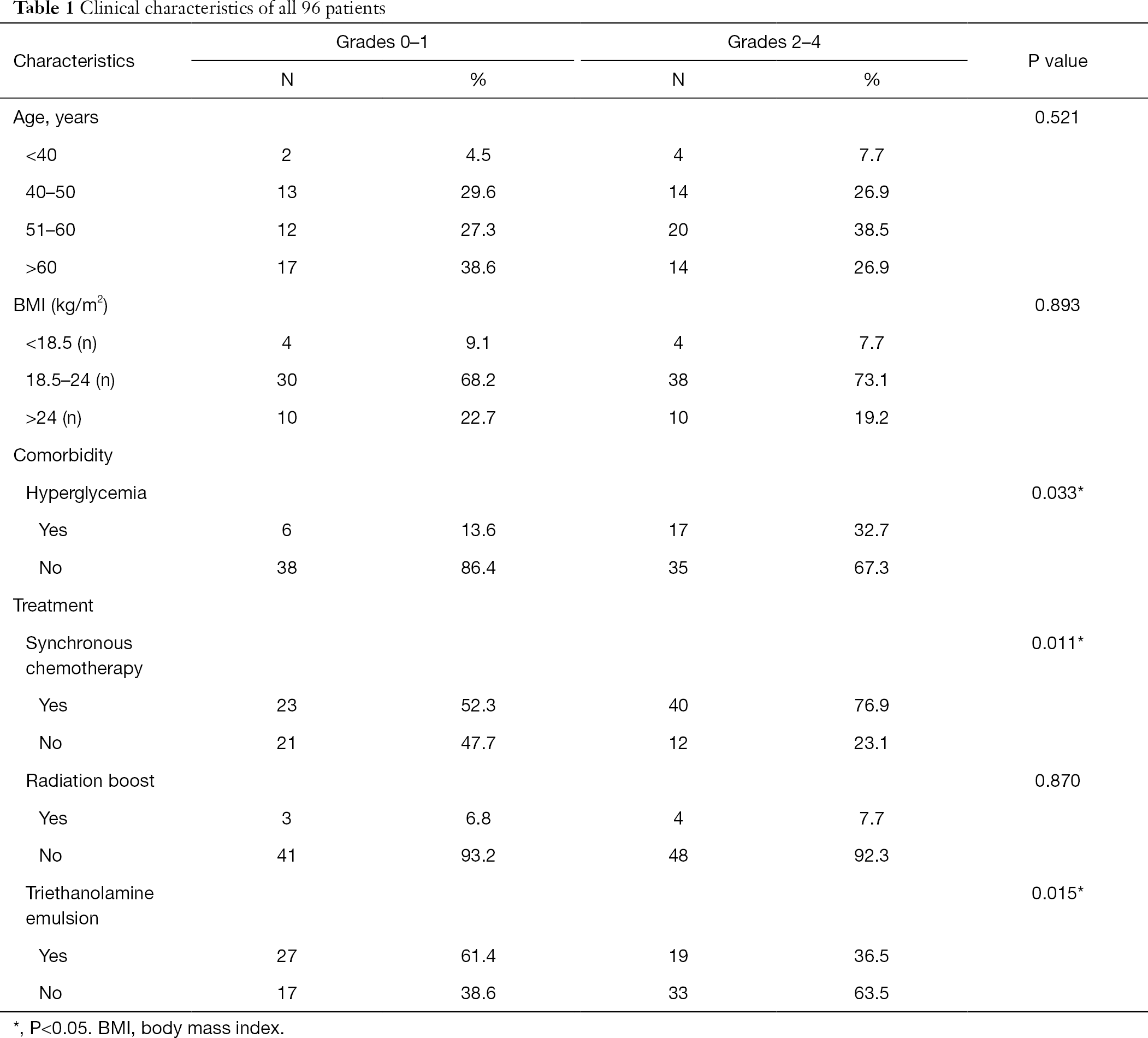 Pathological analysis confirmed 72 cases of cervical cancer, 23 vaginal cancer, and 1 vulvar cancer. According to histopathology, 93 cases were squamous cell carcinoma, 2 were adenocarcinoma and 1 was malignant melanoma; 63 patients underwent synchronous chemotherapy together with radiotherapy, among whom 30 received cisplatin mono-chemotherapy, another 8 underwent the FP regimen, and the remaining 25 underwent the TP regimen. 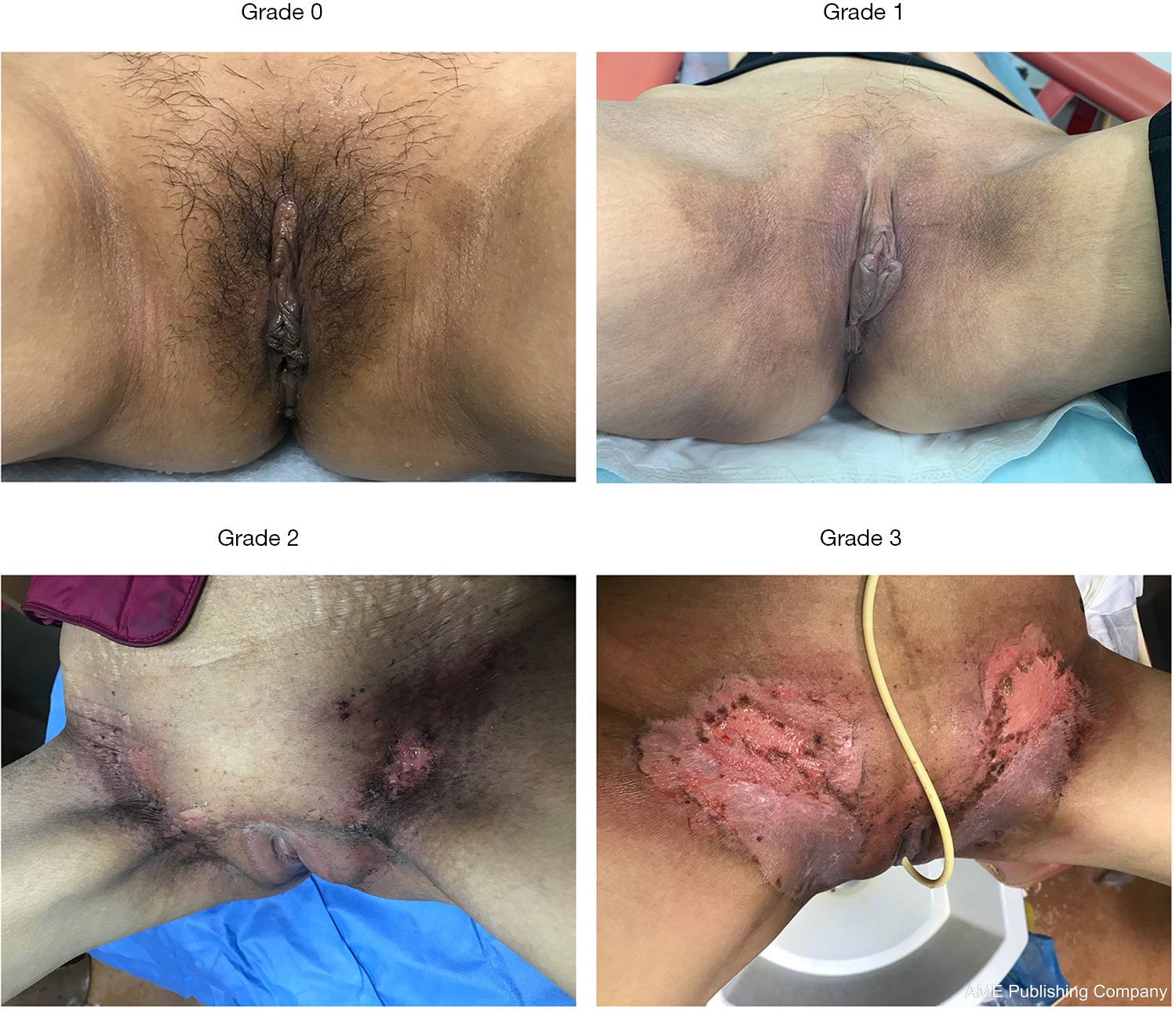 Univariate analysis of acute RID for its risk factors

All variables were included in the univariate analysis, including age, BMI, hyperglycaemia, synchronous chemotherapy, radiation boost, and prophylactic use of triethanolamine emulsion. The presence of grade ≥2 severity RID was significantly associated with synchronous chemotherapy (P=0.011), hyperglycaemia (P=0.029), and prophylactic use of triethanolamine emulsion (P=0.015). However, other variables, including age, radiation boost and BMI, failed to reach statistical significance (t=0.482, P=0.631; t=0.027, P=0.870; and t=0.276, P=0.599, respectively) (Table 3).

Based on the results of univariate analysis, all factors with P<0.1 were entered into the multivariate analysis for association with grade ≥2 severity RID. Three independent factors were included: hyperglycaemia, synchronous chemotherapy, and prophylactic use of triethanolamine emulsion. Because radiation boost has been reported to have significant influence on RID, it was also entered into the logistic multivariate analysis. Grade ≥2 severity RID was independently correlated with synchronous chemotherapy [odds ratio (OR) 3.515; 95% CI, 1.362–9.072; P=0.009], hyperglycaemia (OR 3.150; 95% CI, 1.019–9.736, P=0.046), and prophylactic use of triethanolamine emulsion (OR 0.412; 95% CI, 0.170–0.998; P=0.049). Similar to the univariate analysis, radiation boost demonstrated no statistical significance (P=0.927) (Table 4).

Radiotherapy is of significant importance in the treatment of gynaecological malignancies. IMRT is less toxic to normal tissues, especially the intestine, colon, and rectum (13). However, acute RID of the vulva and inguinal region of individuals undergoing IMRT has been observed in clinical practice (7). Although the mechanism remains unclear, RID raises an urgent concern for its origin. To our knowledge, the present study was the first to focus on its incidence and risk factors in individuals undergoing IMRT for gynaecological malignancies. The present study attempted to fill this information gap in the literature and raise awareness to it.

Although we limited the maximum dose of inguinal and vulvar skin to 50 Gy during IMRT, 35.4% of patients experienced grade 2 acute RID and 18.8% grade 3 acute RID. It has been established that the severity of acute RID directly influences quality of life and interrupts the consistency of radiotherapy, which ultimately negatively affects the expected therapeutic benefit (14,15).

To investigate risk factors for acute RID, for the first time, we used univariate and multivariate analysis for patients with gynaecological malignancies who underwent IMRT. The results indicated that synchronous chemotherapy and hyperglycaemia were independent risk factors for grade ≥2 severity acute RID in the lower vaginal or inguinal region while receiving IMRT. Moreover, the use of triethanolamine emulsion during radiotherapy may help to relieve acute RID.

There were some limitations to our study. First, all data analysed were collected retrospectively, which may have resulted in bias. Therefore, further prospective randomised controlled trials with more objective evaluation are warranted. Second, only 96 patients were enrolled; as such, the sample size may have been insufficient and an expanded database is needed for further analysis. Third, high individual variation exists in the development of RID; therefore, more variables are needed to be stratified to investigate the “dose-effect” of each responsible determinant. For example, the relationships between the severity of RID and varying blood glucose levels, specific chemotherapy regimen, and drug dose remain to be further investigated, which may finally help to guide individual treatment during IMRT.

In conclusion, IMRT for the lower vagina and groin region in individuals with gynaecological malignancies complicated by considerable acute RID cannot be neglected. Moreover, hyperglycaemia and synchronous chemotherapy were independent predictive factors for clinically relevant acute RID. Prophylactic use of triethanolamine emulsion may help to reduce the occurrence of acute RID.

Reporting Checklist: The authors have completed the STROBE reporting checklist. Available at http://dx.doi.org/10.21037/tcr-20-796

Ethical Statement: The authors are accountable for all aspects of the work in ensuring that questions related to the accuracy or integrity of any part of the work are appropriately investigated and resolved. All the procedures performed in this study involving human participants were consistent with the ethical standards of Helsinki declaration (as revised in 2013). The ethical committee of Zhejiang Cancer Hospital approved this study (Reference number IRB-2018-91), and informed consent was taken from all the patients.