Incidence and prognostic factors of hepatoid adenocarcinoma: a population-based analysis

Hepatoid adenocarcinoma (HAC) is defined as an extrahepatic adenocarcinoma with hepatocyte differentiation, characterized by high malignancy, high invasiveness and poor prognosis. The tumor composition can be simple HAC or HAC with typical acinar or papillary adenocarcinoma, signet ring cell or neuroendocrine carcinoma (1). Although most HACs are associated with elevated α-fetoprotein (AFP) levels, the current pathological diagnosis is based on morphological features, regardless of serum AFP levels or immumohistochemical AFP staining (2). HAC occurs mostly in the lung, gastrointestinal tract and digestive organs, and the current treatment methods depend on the primary site, as are other common types of adenocarcinoma.

The current researches on hepatoid adenocarcinoma are mostly case reports. This population-based study aimed to explore the clinical characteristics and prognostic factors of hepatoid adenocarcinoma, so as to provide an accurate prognostic basis for clinical diagnosis and treatment. We present the following article in accordance with the STROBE reporting checklist (available at http://dx.doi.org/10.21037/tcr-20-1126).

The incidence was computed by the Joinpoint Regression Program (Version 4.7.0.0). We used IBM SPSS Statistics for survival analysis. The 1-, 3-, 6-, 12- and 36-month OS was estimated using the life table method. Univariate analysis was performed using the Kaplan-Meier method, and the log-rank test was used for statistical comparisons. Multivariate analysis was further performed to determine independent prognostic factors with the Cox proportional hazards model. P<0.05 was considered statistically significant. 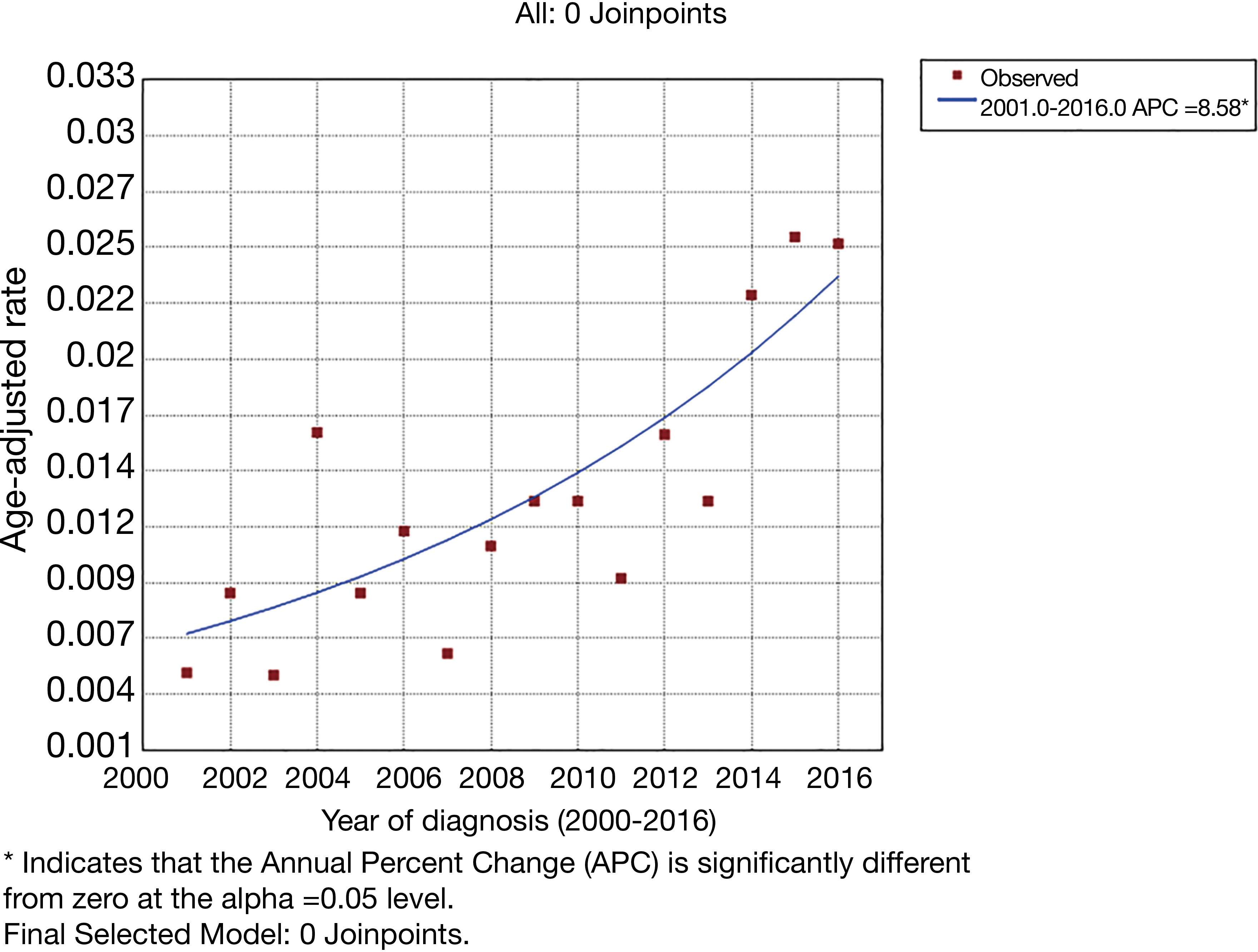 Figure 1 The incidence of hepatoid adenocarcinoma from 2000 to 2016.

A total of 121 patients were obtained, and their clinical manifestations and treatments are shown in Table 1. Most of the patients were elderly, with 66.1% over 60 years old. There were 60 cases of HAC in the lungs, 23 in the digestive tract, 27 in the digestive organs, and 11 in the urinary or reproductive systems. Seven cases of HAC occurred in the liver, and it is particularly important to distinguish HAC from primary liver cancer. Of the 55 patients with known pathological grade, 51 had high-grade adenocarcinoma. According to the AJCC TNM staging, 50.4% of patients had lymph node metastasis, and 59.5% had distant metastasis. In terms of treatment, 34 patients underwent surgery, and 18 underwent radiotherapy or chemotherapy after surgery. Seventeen patients received radiotherapy alone, and 16 received chemotherapy alone. 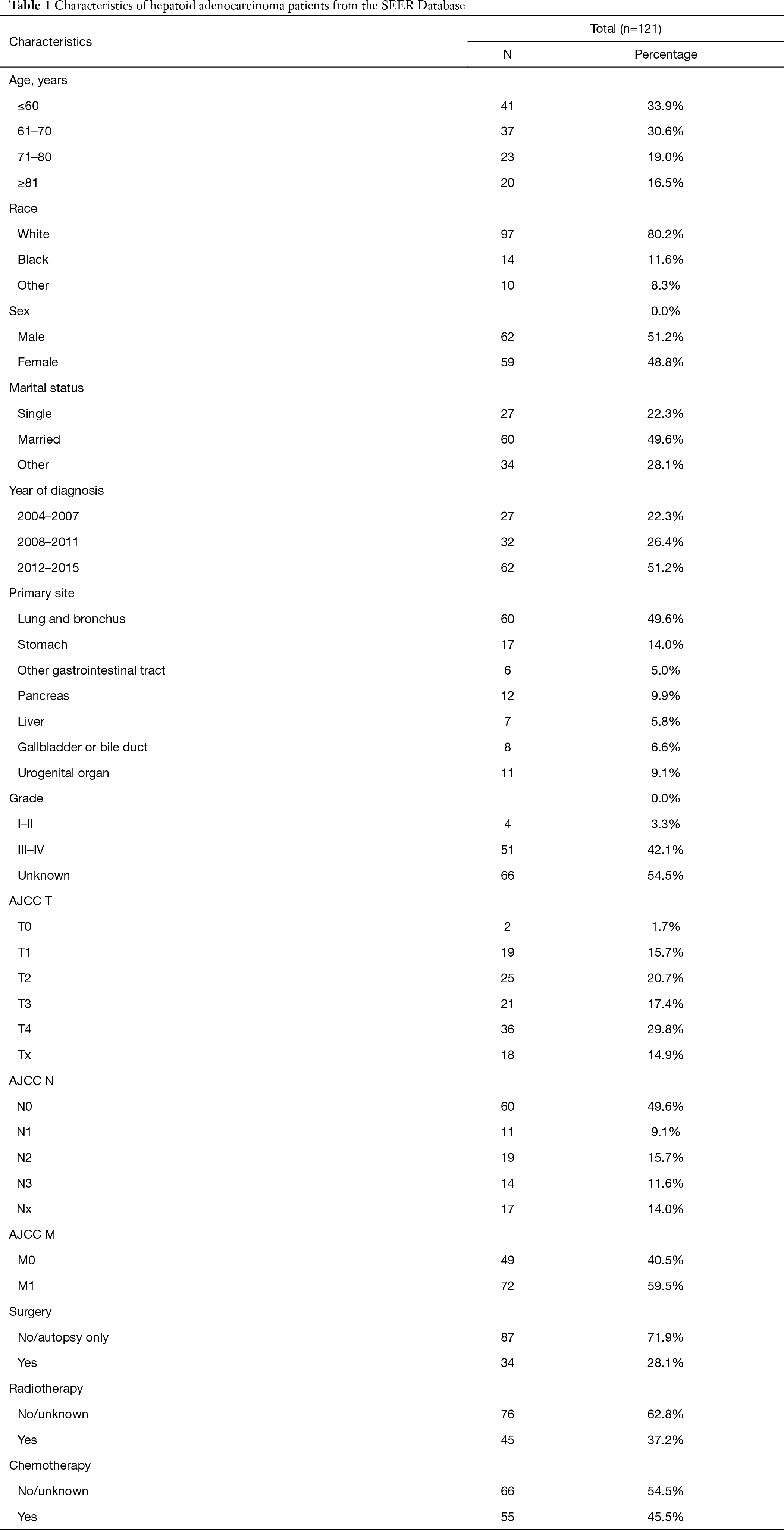 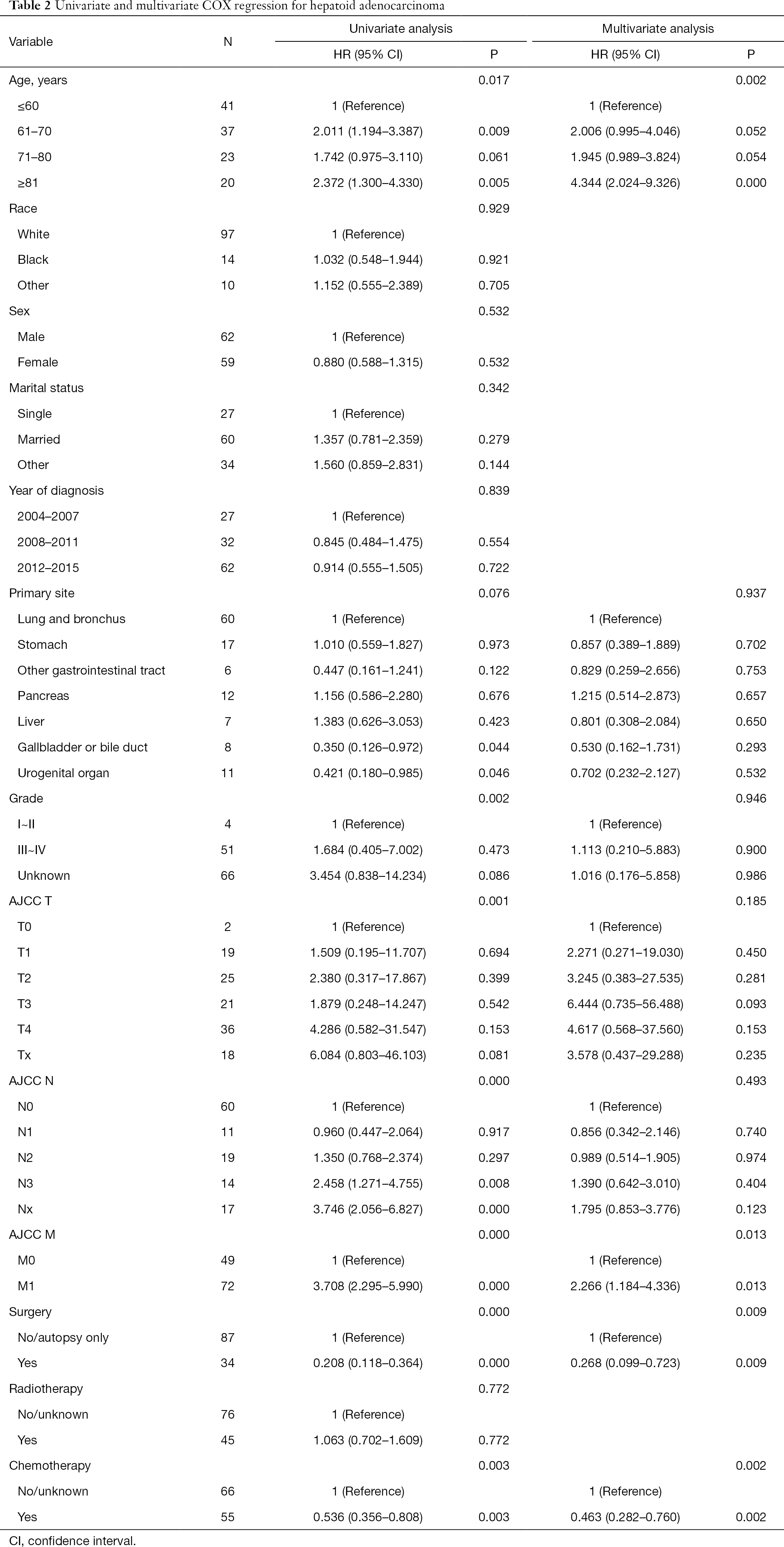 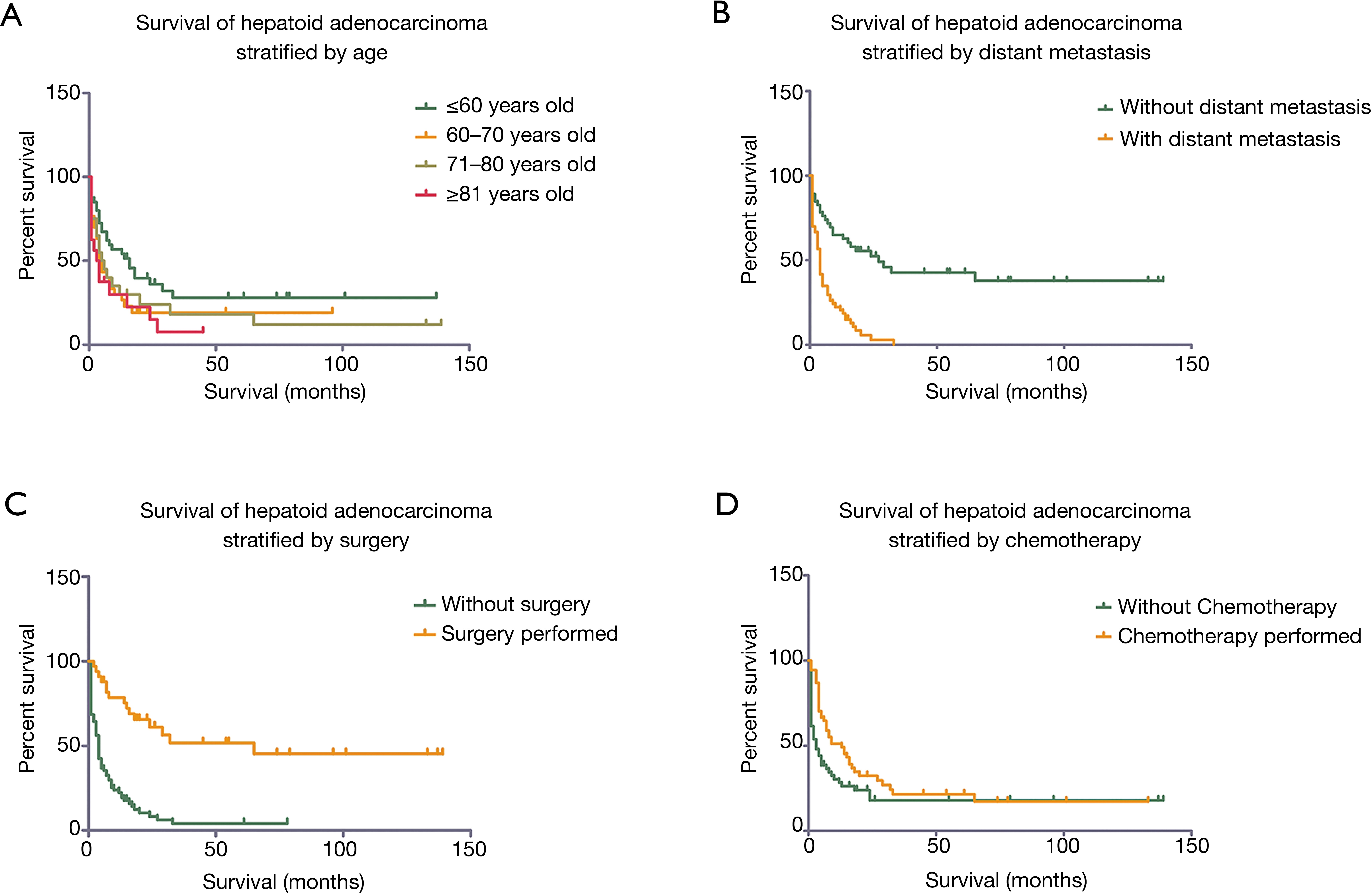 In the current study, we used a large data set from the SEER database to investigate the incidence and prognostic factors of HAC. The age-adjusted rate of HAC between 2000 and 2016 was 0.014 per 100,000 people (95% CI: 0.012 to 0.015). During this period, the age-adjusted incidence of HAC rose gently, with no joinpoint. This rising trend may be due to the increased awareness of HAC. Ishikura first proposed the term hepatoid adenocarcinoma in 1985 (3). The diagnosis of HAC is based on pathological morphological features. Previously, there were few studies on HAC, which made the differential diagnosis more difficult. With the increasing cognition of the special clinical and pathological features of HAC, the diagnosis rate of HAC also gradually increased (4,5).

Through survival analysis, we found that HAC had a poor prognosis with a 1-year survival rate of 35.0%. The 3- and 5-year survival rates were both only 16.9% (95% CI: 2.97 to 7.03 months). The median survival time of these patients was 5 months. The OS of HAC in our study was poor compared to that in historical studies. In the review by Metzgeroth et al., the 1-year OS rate of 83 HAC patients was 55%, and the median survival time was 11 months (range, 0.1–102) (6). Grossman et al. reviewed 14 pulmonary HAC patients with survival information, and the 1-year survival rate was 50% (7). Zeng et al. analyzed the survival of 122 gastric HAC patients from their center and historical studies, and the 1-, 3-, and 5-year disease-specific survival rates were 62.8%, 37.2%, and 29.2%, respectively (8). Due to the rarity of HAC, literature reviews of previously published case reports constituted the bulk of the data in the above studies leading to inevitable publication bias. The limited sample size may be another reason for the different prognoses in our study.

In our study, the most common HAC sites were the lung (49.6%), stomach (14%), pancreas (9.9%), urogenital organ (9.1%), and gallbladder or bile duct (6.6%). Interestingly, the anatomic incidence of HAC was quite different from that of the case report groups. Metzgeroth reviewed 261 previously published case reports of HAC before 2010, and the results suggested that the most common HAC locations were the stomach (63%), ovaries (10%), lung (5%), gallbladder (4%), pancreas (4%), and uterus (4%) (6). Although the proportion of HAC primary sites is still controversial, our research suggests that in recent years, pulmonary HAC has become the most common site, prompting clinicians to pay more attention to it. Moreover, our study shows that there was no significant correlation between prognosis and tumor location. In the studies of Metzgeroth and Hoshida, the prognosis of patients with HAC originating in the ovary and endometrium was slightly better than that of other patients, but the difference was not statistically significant due to the small sample size (6,9).

Through multivariate analysis, we found that age at diagnosis, distant metastasis status, surgery and chemotherapy acceptance were independent prognostic factors for HAC. These results could help doctors choose the proper treatment for HAC patients.

Hepatoid adenocarcinoma is more likely to occur in elderly patients, with 66.1% of patients older than 60 years. The median age was 66 (range, 31–85) years, similar to the previously reported 65 years (6). The previously reported median ages of gastric HAC were 65.5 and 66 years (10,11). In addition, our study is the first to find that patients younger than 60 years have better outcomes, with a 1-year survival rate as high as 55.5%.

Our study found that 59.5% of HAC patients had distant metastases (mainly in the liver and lung) at the time of diagnosis. After analysis, the prognosis of patients with distant metastasis was significantly worse than that of patients without distant metastasis. There was no significant survival difference in lymph node staging. Historical studies have found that both gastric and intestinal HAC pTNM staging were independent prognostic factors, but no subgroup analysis of T, N, and M staging was performed (12-15). Yang et al. reported three pancreatic HAC cases and reviewed an additional 31 cases in the literature. The results suggested that lymph node and distant metastases were associated with worse disease-specific survival (P=0.002 for both) (16).

Currently, the treatment of HAC is determined by the primary site, as are other common types of adenocarcinoma. Patients with local tumors undergo surgical treatment. Others with lymph node metastasis or distant metastasis undergo radiation or/and chemotherapy. Our study found that surgery and chemotherapy acceptance were independent factors for improved survival. Zhang et al. also proposed that chemotherapy was an independent prognostic factor in 20 cases of gastric HAC (13). 5-FU-based chemotherapy was found to benefit survival in patients with gastric HAC (9). Another study found that among 18 cases of HAC with distant metastasis, a cisplatin-based regimen showed better efficacy than an irinotecan, gemcitabine, oxaliplatin or 5-FU regimen, with 75% of the patients having clinically observed remission (17). In addition, patients undergoing neoadjuvant therapy were found to have a higher survival rate than those only undergoing postoperative adjuvant therapy. Therefore, for those patients diagnosed with an advanced pTNM stage, neoadjuvant therapy is strongly recommended to promote patient survival (8). Our study found that there was no significant difference in survival between patients with radiotherapy and those without radiotherapy. This finding suggests that HAC may be a kind of tumor with radiation resistance, and the molecular mechanism of which still needs further study.

Molecular targeted therapy may offer hope to patients with specific genetic mutations. In studies of targeted therapy for pulmonary HAC patients, an ALK gene rearranged patient was treated with crizotinib, and the tumor shrank radiologically in the first 2 months. However, after 6 months, the tumor showed imaging progression (18). Basse Victor reported a case of durvalumab anti-PD-L1 therapy. Although the PD-L1 status was negative, the patient still had a partial response to immunotherapy (19). This result may be related to the patient’s mismatch-repair status. Mismatch repair status patients without effective treatment may benefit from PD-1 blockade (20). Ramucirumab, a monoclonal antibody for VEGF receptor-2, showed a significant clinical effect in a case of chemotherapy-resistant gastric HAC (21). According to the current studies, it can be speculated that targeted drugs can be used as adjuvant therapy to control the development of tumors but may need to be combined with other therapies to completely control tumor progression.

The limitations of this work include the following: (I) the lack of data on immunohistochemistry and serum tumor markers, such as AFP, which may be key prognostic factors; (II) the lack of some traditional treatment information in the SEER database, such as chemotherapy regimens and surgical margin status; (III) the unavailability of targeted therapy information in the SEER database; and (IV) the relatively small number of patients, which is insufficient to fully explain the occurrence, treatment and prognosis of this rare tumor.

This study suggests that HAC is a rare malignant tumor with a gradually increasing incidence and a poor prognosis. The most common sites were the lung (49.6%), stomach (14%), pancreas (9.9%), urogenital organ (9.1%), and gallbladder or bile duct (6.6%). Age at diagnosis, distant metastases, surgery, and chemotherapy were independent prognostic factors.

Reporting Checklist: The authors have completed the STROBE reporting checklist. Available at http://dx.doi.org/10.21037/tcr-20-1126

Conflicts of Interest: Both authors have completed the ICMJE uniform disclosure form (available at http://dx.doi.org/10.21037/tcr-20-1126). The authors have no conflicts of interest to declare.