Thyroid cancer (TC), one of the sporadic human carcinomas and representing about 5% of thyroid nodules, is the most widespread endocrine cancer around the world (1). The incidence rate of TC in developed countries and developing countries such as China has been undergoing a marked global upsurge in recent decades (2-5), making TC an emerging public health concern. Recent advances in TC treatment such as chemotherapy or surgery have improved the prognosis of TC (6). Notwithstanding, due to the lack of in-depth understanding of the molecular mechanism on the occurrence and development of the disease, patients with advanced TC still have few treatment alternatives. Therefore, it is of far-reaching clinical significance to explore novel molecular targets for TC therapy.

A growing body of evidence suggested that microRNAs (miRNAs) are able to control the expression of genes related to proliferation, invasion and migration of cancer cells by targeting mRNA 3'UTRs, so as to prevent or accelerate the progress of tumor (7-15). Previous medical and basic research data suggested that miR-195 plays an important role in cancer (16-26). The expression of miR-195-5p was previously reported to be elevated in several diseases, such as deep vein thrombosis (27), while in other diseases, including collapse of steroid-induced osteonecrosis of the femoral head, non-small cell lung cancer and cervical carcinoma, decreased expression of miR-195-5p was confirmed (28-30). In particular, it has been recently reported that miR-195 expression in TC tissue is decreased, and its ectopic high expression has been proved to significantly inhibit the expression of raf1, thus inhibiting the proliferation of TC cells (31). More recent studies showed that miR-195 acts as a tumor suppressor in TC by inhibiting tumor growth and metastasis, which is probably related to regulation of Wnt/β-catenin signaling pathway, VEGF-A and p53 in mechanism (32,33). Moreover, when the function of miR-195 is interfered by other factors, the malignancy of TC cells is remarkably enhanced (34). All things considered, the link between TC and the expression of hsa-miR-195-5p is still largely obscure and poorly understood, especially in the aspect of what concerns its inhibitory effect on TC cell proliferation and the underlying molecular mechanism at cell cycle levels.

Along these lines, the aim of this study was to investigate the function of hsa-miR-195-5p in regulation of TC cell proliferation and the underlying molecular mechanism.

The extraction of total RNA from cells was performed with mirVana miRNA Isolation Kit (Ambion) following the protocol described in the manufacturer provided manual. To determine the hsa-miR-195-5p expression levels, real time qRT-PCR experiments were carried out using the gene-specific TaqMan miRNA Assay Probes (Applied Biosystems, Foster City, CA, USA). The real-time PCR reaction was performed in triplicate. The relative hsa-miR-195-5p expression was assessed by normalization to the small nuclear RNA U6 using the 2–∆∆Ct method.

The MTT cell proliferation assay was performed using the TPC-1 cells. Briefly, TPC-1 cells (2,000 cells/well) were seeded into 96-well microplates in medium containing 10% FBS for 72 hours. Afterward, cells were stained with 100 µL MTT reagent (0.5 mg/mL, Sigma, St Louis, MO, USA) and incubated for another 4 h at 37 °C. After discarding the culture medium and replacing 150 µL DMSO as its substitution, the absorbance at 490 nm was assessed in a Thermo Scientific Multiskan (Thermo Fisher Scientific, USA).

The expression level of hsa-miR-195-5p in TC cell lines TPC-1 and B-CPAP was assessed by real time PCR examination. The results (Figure 1) revealed that the relative expression of hsa-miR-195-5p was significantly down-regulated in both TPC-1 (1.34±0.21) and B-CPAP (1.75±0.20) cells compared with the normal thyroid cell line HT-ori3 (6.38±0.50). These results reveal that hsa-miR-195-5p is abnormally down-regulated in human TC cell lines, indicating it could be involved in TC pathogenesis. 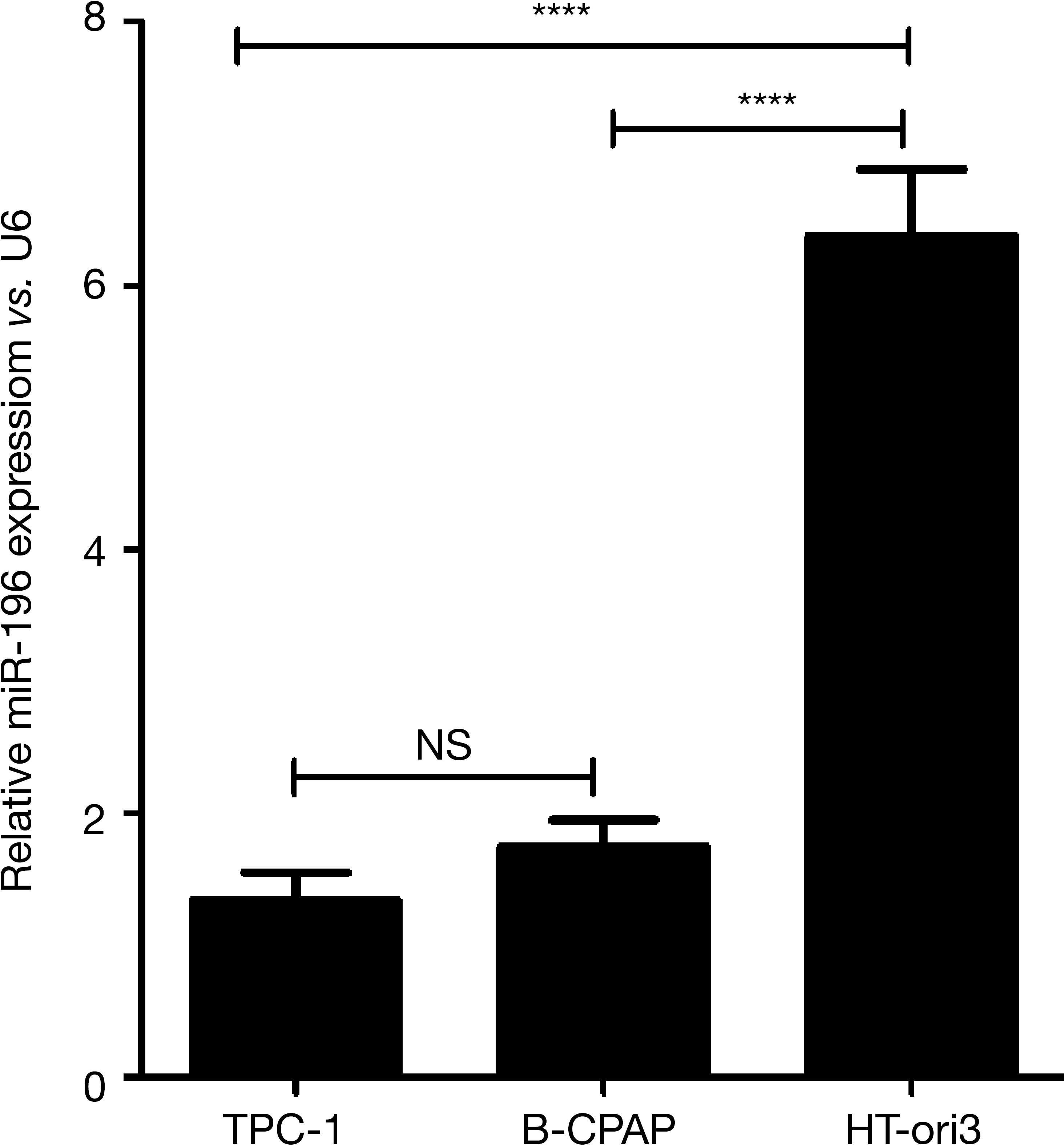 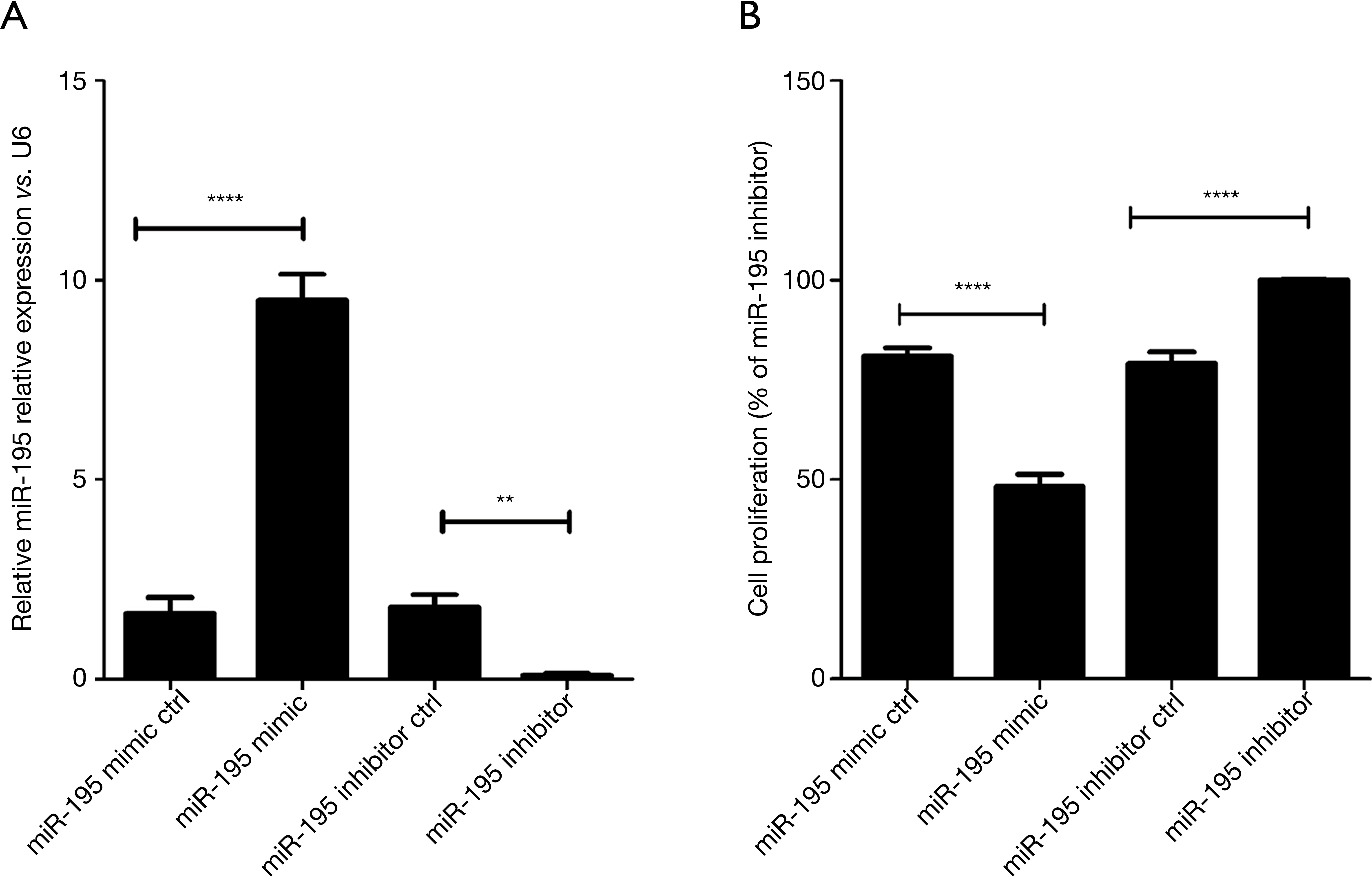 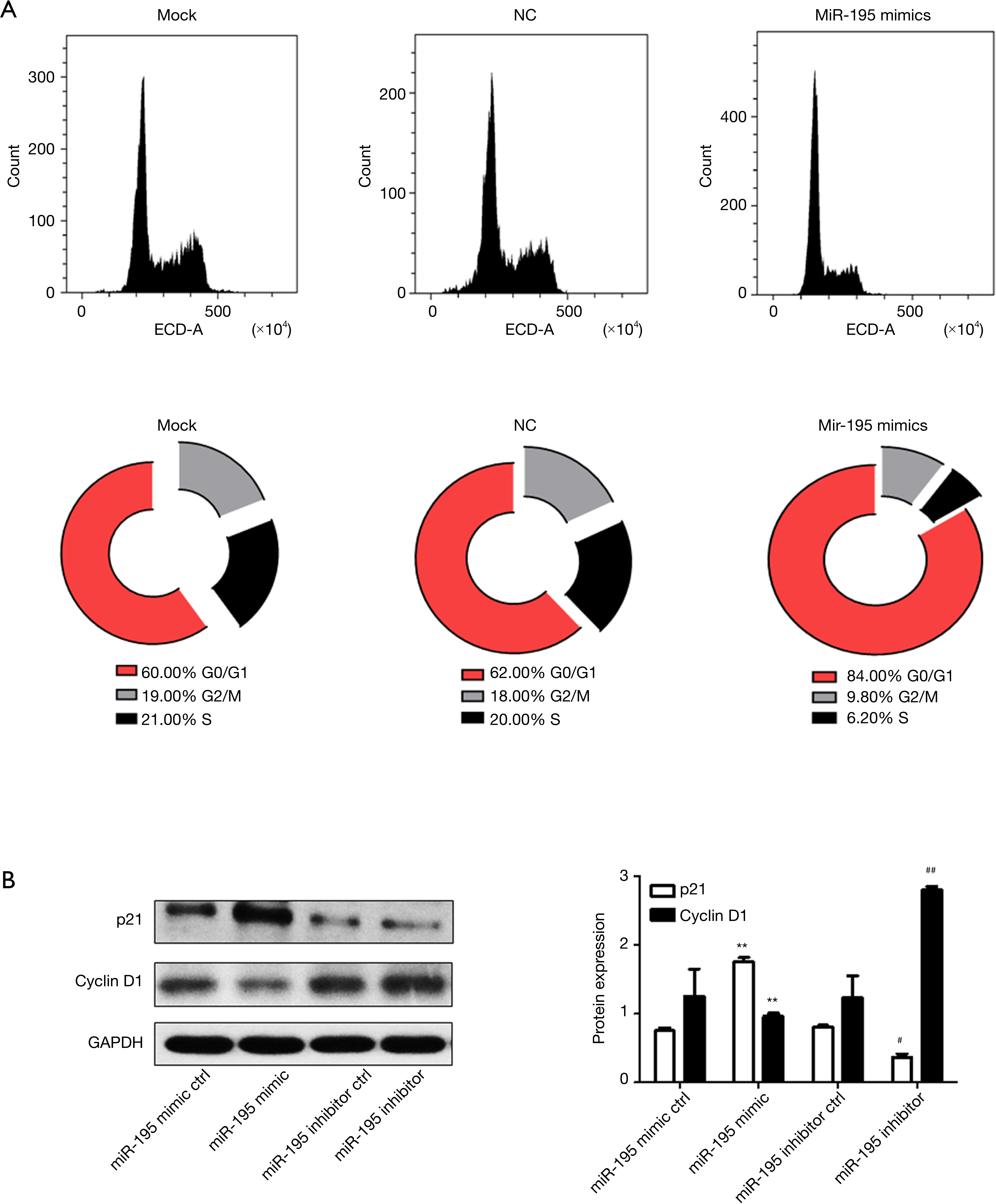 Figure 3 Hsa-miR-195-5p induces cell cycle arrest at G0/G1 phase by inhibition of cyclin D1 expression and upregulation of p21 expression in TPC-1 cells. (A) Flow cytometry analysis of cell cycle and quantitative representation. (B) Effects of hsa-miR-195-5p mimics on the endogenous cyclin D1 and p21 protein levels. TPC-1 cells were co-transfected with hsa-miR-195-5p mimics or negative control oligonucleotides. The expression of cyclin D1 and p21 was in cells was evaluated by Western blotting. GAPDH was used as loading control. The data were subjected to two-way ANOVA analysis. **, P<0.01 compared with mimic control, #, P<0.05, ##, P<0.01 compared with inhibitor control; NC, negative control oligonucleotides. 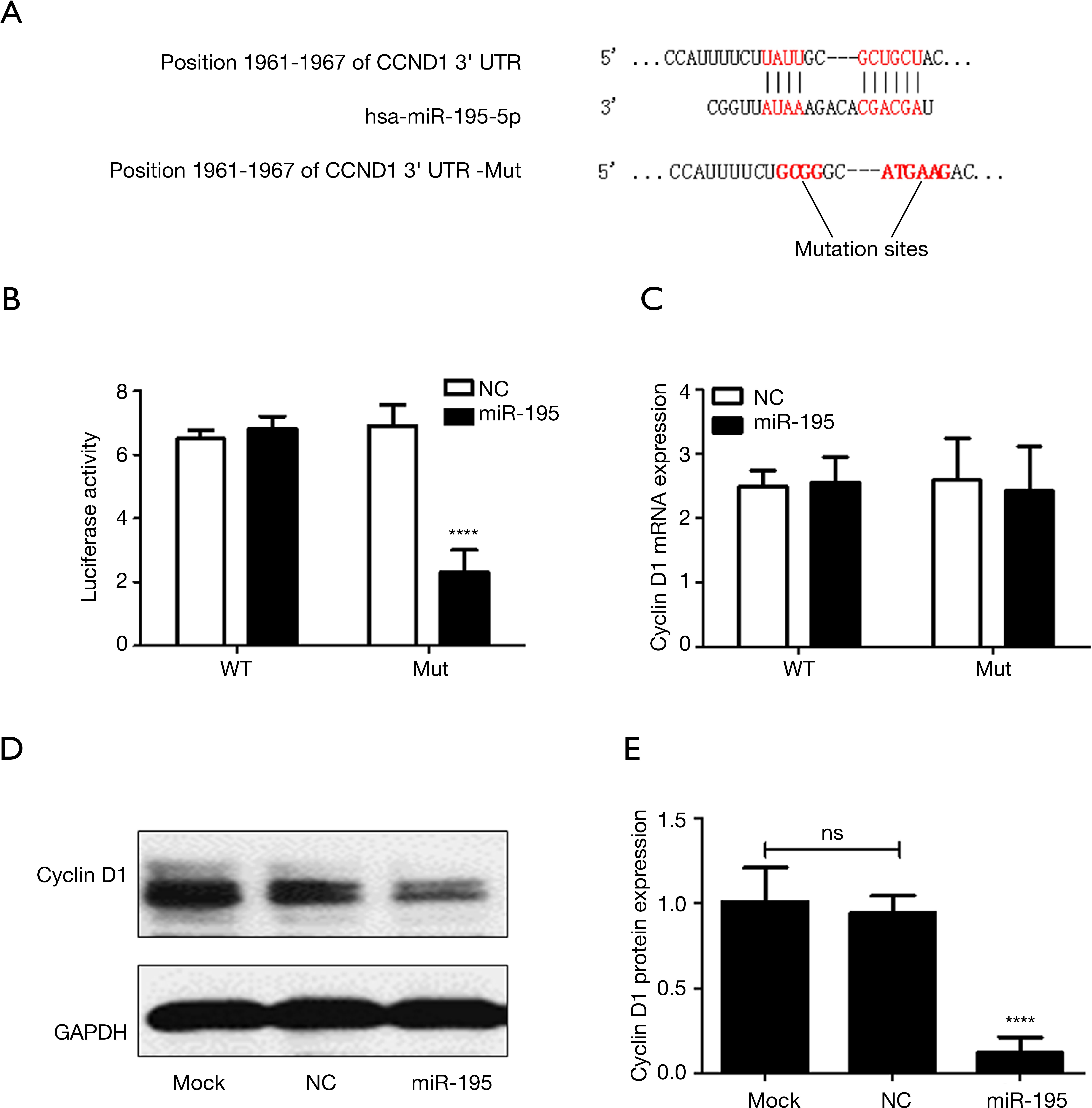 MicroRNAs (miRNAs) are a group of novel gene regulatory factors, which play an important role in the process of tumor cells growth. Clinical evidence has shown that miRNAs are abnormally expressed in a variety of human tumors (35).

Latest studies indicated that miR-195 expression is considerably decreased in breast cancer and miR-195 acts as a tumor suppressor (36). It was also reported that the expression of miR-195 in adrenocortical carcinoma is significantly down-regulated, and the down-regulated level is positively correlated with poor prognosis (37). Comparable reports linked the down-regulation of miR-195 in colorectal cancer with lymph node metastasis (38). Moreover, studies have demonstrated the involvement of miR-195 in acquired temozolomide resistance in glioblastoma multiform cells (39). Nonetheless, the significance of hsa-miR-195-5p in TC pathogenesis and its plausible application as a therapeutic target for this disorder has yet to be assessed.

In the present study, we measured the expression level of hsa-miR-195-5p in TC cell lines and evaluated its regulatory role on cell proliferation. Our findings showed that hsa-miR-195-5p expression was markedly decreased in TC cell lines compared with normal cells. This result also confirms the previous research results (36-39). Moreover, we discovered that over-expression of hsa-miR-195-5p markedly blocked TC cell proliferation by promoting cell cycle arrest at the G0/G1 phase, which was further confirmed by its regulatory effects on cyclin D1 and p21 protein. This result is consistent with that of Furuta et al. (40) who demonstrated that the molecular pathways regulating cell cycle progression are characteristically altered by decreased expression of miR-195, thus instigating abnormal cell proliferation in hepatocarcinogenesis.

Cyclin D1, a critical protein involved in cell cycle regulation, is up-regulated in most human tumors including TC (45,46). It has also been reported that cyclin D1 plays a key role in the formation of activated CDK4/CDK6 complex, which in turn, initiates phosphorylation of pRb (47,48). Consistent with these reports, our data show that cyclin D1 was down-regulated in TPC-1 cells over-expressing hsa-miR-195-5p mimic. Furthermore, silencing of cyclin D1 in TPC-1 cells transfected with hsa-miR-195-5p mimics reversed the negative effect of hsa-miR-195-5p on cell proliferation, which implies that hsa-miR-195-5p inhibited TC cell proliferation, partly at least, by direct targeting of cyclin D1.

Conclusively, our present study indicated that hsa-miR-195-5p is a candidate tumor-suppressor miRNA in TC and that the hsa-miR-195-5p/p21/cyclin D1 pathway could be a potential therapeutic target for TC.