Colorectal cancer (CRC) is one of the most common cancers in China. Both the incidence and mortality of CRC ranked fifth in 2015, with 276,000 new cases and 191,000 deaths, respectively (1). Surgical resection, chemotherapy, and molecular targeted therapy are the major treatment options for CRC. However, 30–40% of patients who receive systematic treatment will relapse (2). The 5-year survival rate of CRC in China is around 55%, and the 5-year survival rate of patients with stage IV CRC is <10% (3). It is important that the therapeutic regime is further improved to achieve a higher survival rate in patients.

Despite the rapid development of molecular targeted drugs in recent years, only several drugs, such as bevacizumab, cetuximab, and panitumumab, are currently recognized as molecular targeted drugs for CRC (4,5). According to the 2019 National Comprehensive Cancer Network guidelines for CRC, these three molecular targeted drugs are used as supplements for general chemotherapy programs and are only recommended for use in patients with the KRAS wild type (6). It has been suggested that these molecular targeted drugs cannot be dependently used for the treatment of CRC patients. The main limitation of current molecular targeted drugs is that they are targeted at only one or one kind of protein, whereas the expression of the specific protein in cancer cells is different due to their different progression and development. There are two solutions to this problem; one is to increase the type of drug targets, and the other is to find new targets to improve the inhibitory effects of tumors through interactions between different targets (7). The former has high risks due to the side-effects of drugs. The latter is the currently preferred option, because it can inhibit the growth of tumors more safely and effectively.

The ribosome synthesis superfamily plays an important role in the process of ribosome synthesis and rRNA binding, which can affect cell proliferation and differentiation (8). Growing evidence indicates that upregulated ribosome biogenesis is associated with an increased risk of cancer onset (9). The biogenesis of ribosomes BRX1 (BRIX1) gene, which is involved in the synthesis of ribosomal 60S subunits, is located in cytoband 5p13.2 and is expressed at highest in pulmonary alveoli (10). It has been reported that its expression is related to smoking habits and myocardial damage due to smoking and PM2.5 exposure (11,12). Studies on BRIX1 in cancer are rare. Jung et al. reported the significantly increased expression of BRIX1 in a variety of tumors (13). However, the relationship between the expression of BRIX1and the progression and prognosis of CRC is still unclear. In the present prospective study, we measured the expression of BRIX1 in patients with CRC to determine the role of BRIX1 in the progression of CRC and provide preliminary evidence for the development of novel molecular targeted drugs for CRC.

We present the following article in accordance with the MDAR reporting checklist (available at http://dx.doi.org/10.21037/tcr-20-2564).

Patients who received surgical treatment for CRC between January 2018 and December 2018 at the Affiliated Nanjing Jiangbei Hospital of Nantong University were enrolled. In the present study, CRC was defined as tumors located between the ileocecal valve and dentate line. The following were excluded: (I) patients <18 years of age; (II) patients who refused to sign an informed consent form; (III) patients who were diagnosed with metastatic CRC; (IV) patients who had severe organ dysfunction; (V) patients who had life-threatening postoperative complications; and (VI) patients who had previously received surgical treatment for CRC. CRC tissue samples and adjacent normal tissue samples from patients were collected. Collected tissues were used for further quantitative reverse transcription–polymerase chain reaction (RT-PCR) and Western blot. All enrolled patients were followed up for 12 months. The outcome in the present study was overall survival of enrolled patients. The study was conducted in accordance with the Declaration of Helsinki (as revised in 2013). The study was approved by the ethics committee of the Affiliated Nanjing Jiangbei Hospital of Nantong University (No. J2017034), and informed consent was taken from all the patients.

The mRNA levels of BRIX1 genes were quantified by the ABI PRISM 7500 sequence detection system (Applied Biosystems). The primer pair used in the present study was as follows: forward: CCCGTCTTCCAGTCTCCTAA; reverse: TGTCCAGGGTTTCCTTCG. All assays in the present study were performed in three duplicated repeats. The data were automatically collected and analyzed by SDS version 1.3.1 (Applied Biosystems).

The protein in the tissue sample was extracted using a total protein extraction kit (Solarbio). Briefly, 100 mg tissue was washed with phosphate buffer saline and minced. The minced tissue was then immersed in lysis buffer for 2–4 hours and centrifuged at 12,000 ×g for 30 minutes at 4 °C. The supernatant was collected and the protein was quantified using a bicinchoninic acid protein assay kit (ThermoFisher Scientific).

In order to perform the Western blot assay, 20 mg protein was separated using sodium dodecyl sulfate-polyacrylamide gel electrophoresis gels and then transferred to polyvinylidene difluoride membranes. The membranes were blocked with 5% bovine serum albumin and incubated overnight with primary antibodies against BRIX1 (Sino Biological). The membranes were then incubated with secondary antibodies for 1 hour at room temperature. Glyceraldehyde-3-phosphate dehydrogenase was used as the reference. The blot was quantified using Image J software version 1.51 (National Institutes of Health).

Continuous variables in the present study were reported as mean ± standard deviation, and other categorical variables were reported as numbers with percentages. The differences of continuous variables and categorical variables between the two groups were analyzed using Mann-Whitney U-test and χ2 test, respectively. GraphPad Prism 7 software (GraphPad Software) was used for the Kaplan-Meier survival curve, and the differences between the two groups were analyzed using log-rank test. Moreover, the Cox proportional hazards model was used to analyze the risk factors of overall survival in CRC patients. Differences were considered to be significant if P<0.05. The statistical analysis was performed using Stata16.0 (StataCorp LLC).

Sixty CRC patients were enrolled in the present study. Their characteristics are shown in Table 1. There were 38 male patients and 22 female patients in the study. The mean age of the enrolled patients was 60.4±9.6 years. The tumors in 23, 15, and 22 patients were located at the right-sided colon, left-sided colon, and rectum, respectively. CRC patients at all stages were enrolled in the present study; 9 patients were stage I, 24 were stage II, 16 were stage III, and 11 were stage IV. Differentiation stage data were collected according to histopathological examinations. As a result, 16 tumors were found to be well differentiated, 31 were moderately differentiated, and 13 were poorly differentiated. The CEA and CA199 levels were also recorded. As seen in Table 1, the CEA level was elevated in 41 patients, and the CA199 level was elevated in 29 patients. 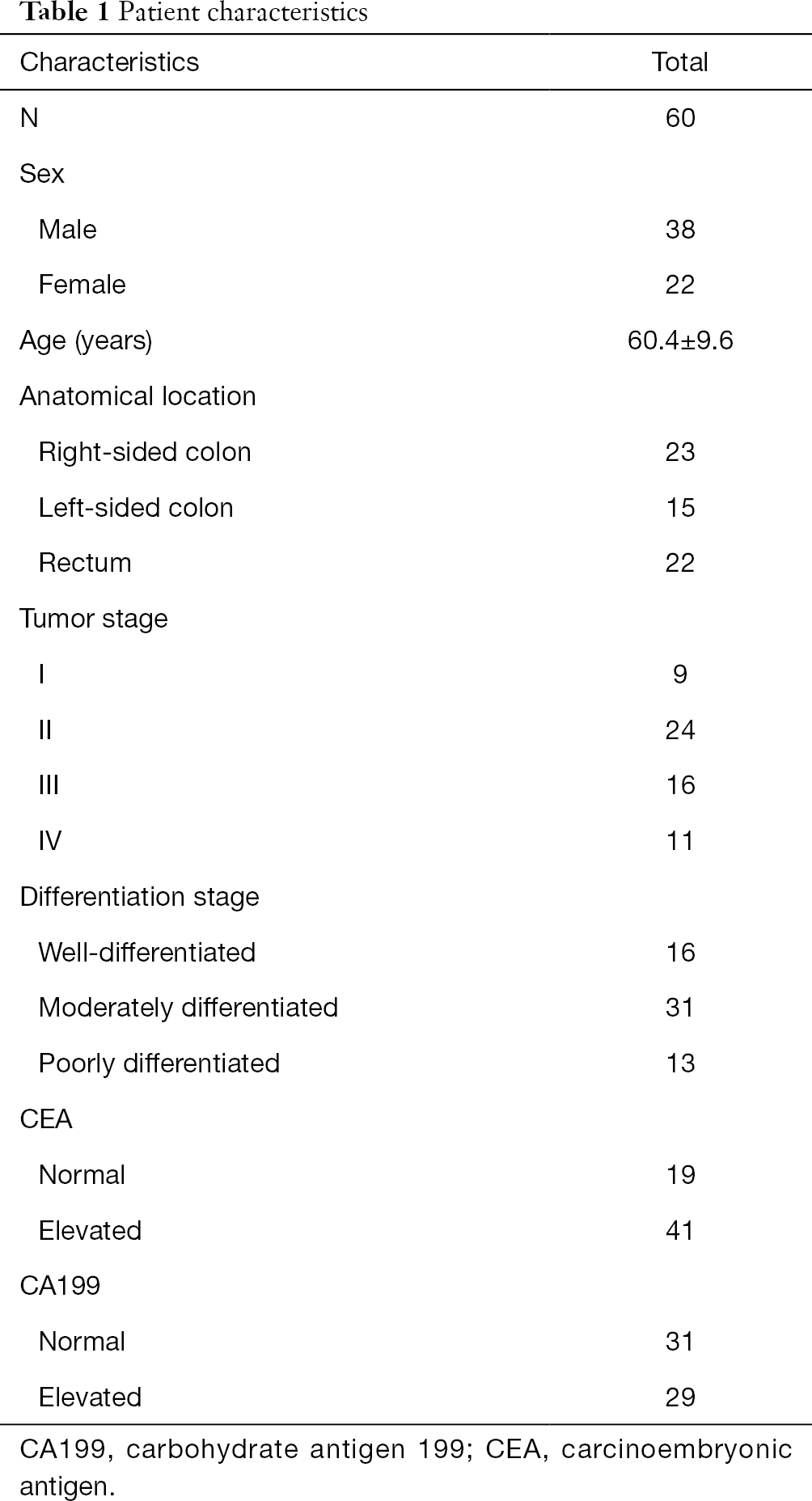 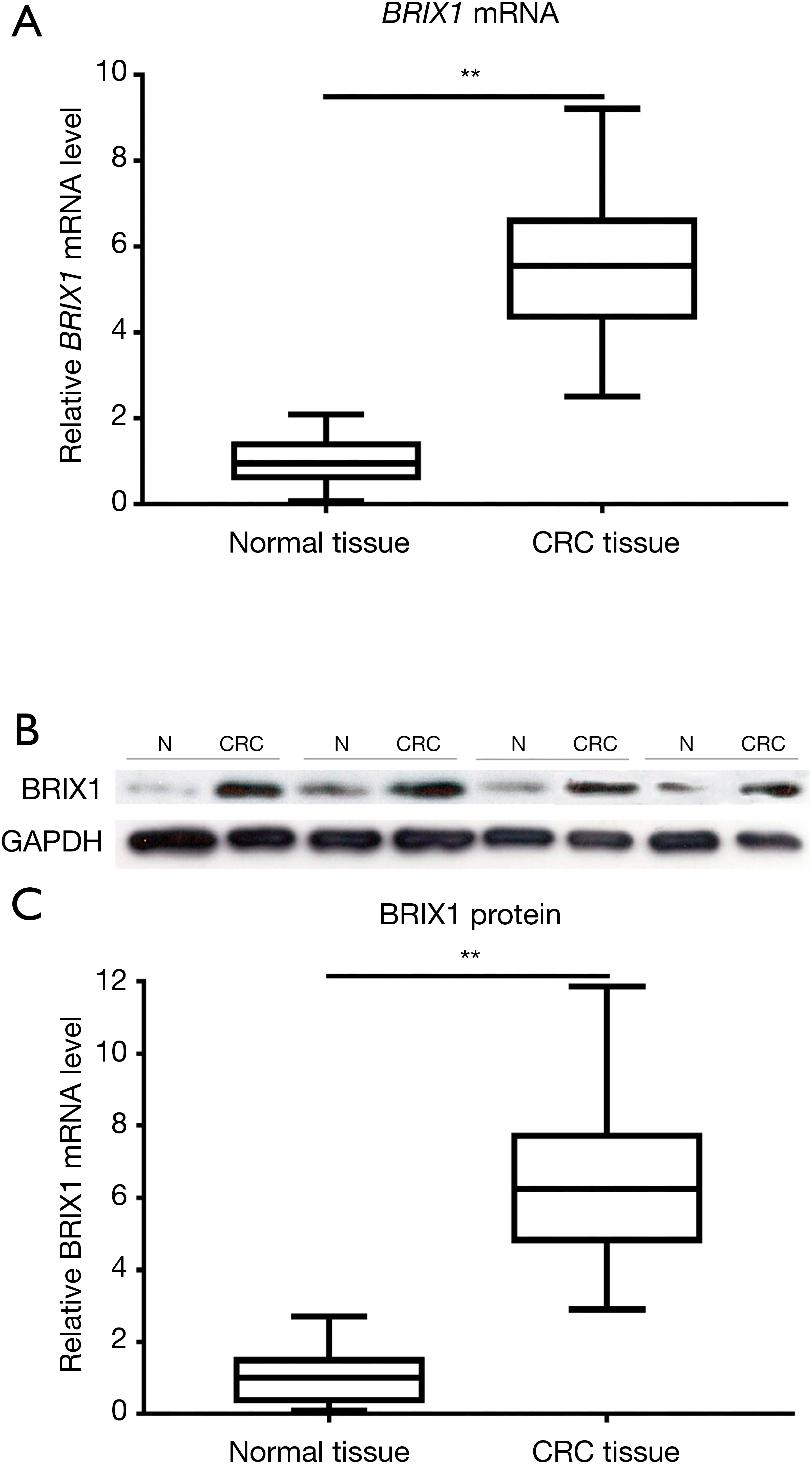 BRIX1 level was related to the prognosis of CRC patients 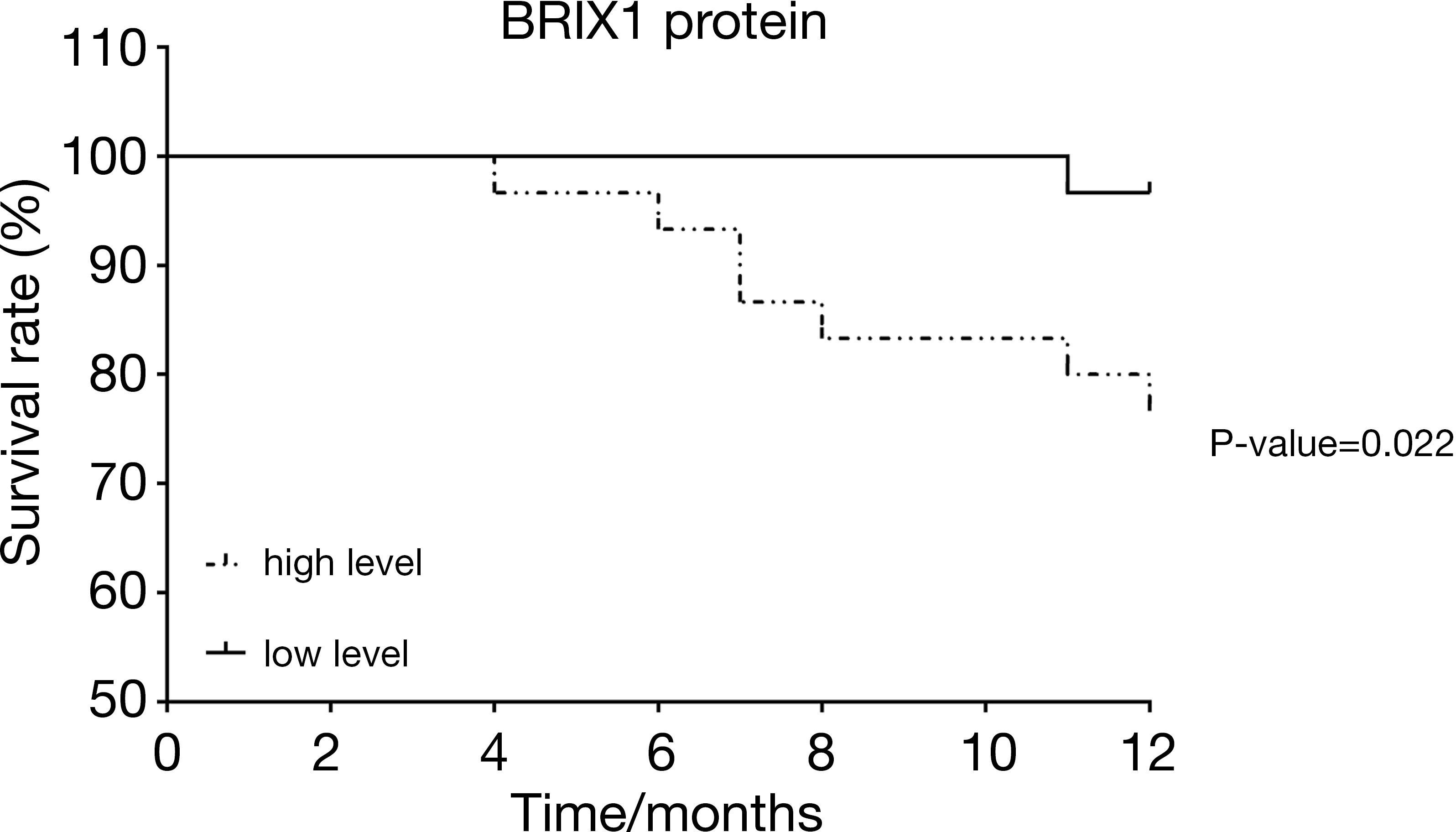 Figure 3 Kaplan-Meier survival was used to compare overall survival in groups with high and low levels of the BRIX1 protein according to the log-rank test.

The BRIX1 gene has been known to be involved in the synthesis of ribosomal 60S subunits. However, its function in the progression of cancer, especially CRC, has not been investigated. The aim of the present study was to determine the relationship between the expression of BRIX1 and the progression and prognosis of CRC patients. The results indicated that CRC tissues expressed more BRIX1 mRNA and protein than normal tissues. Moreover, the expressions of BRIX1 mRNA and protein were much higher in CRC tissues from patients with stages III–IV CRC than stages I–II CRC. An elevated level of the BRIX1 protein also acted as a risk factor of mortality in CRC patients. In the present study, we preliminarily discussed the role of BRIX1 in CRC and laid a foundation for future research of new therapeutic targets for CRC.

Some commonly used chemotherapeutics for CRC, such as 5-fluorouracil (5-FU) and oxaliplatin, have been reported to interfere with not only DNA synthesis but also ribosome synthesis (22,23). 5-FU is able to combine with all kinds of RNA to alter the metabolism of RNA and reduce the biogenesis of ribosome (22). Oxaliplatin is also able to capture the components related to ribosome synthesis in CRC cells (23). The interference of these drugs on ribosome synthesis may also play a role in the treatment of CRC. However, this warrants further investigation.

As previously reported, several gene mutations in CRC may contribute to the upregulation of ribosome synthesis. The most common mutation related to ribosome synthesis in CRC is the MYC mutation. There are three kinds of RNA polymerases involved in ribosome synthesis through the transcription of rRNA. The MYC mutation was found to induce the transcriptions of all three RNA polymerases and further stimulate rRNA synthesis (24,25). Another common mutation in CRC is found in KRAS. The expression of KRAS leads to the activation of the mitogen-activated protein kinase signaling pathway, and further participates in the regulation of ribosome synthesis. Moreover, KRAS mutation was found to increase the expression of ribosome-related proteins and the translation of mRNA (26). Drugs have been developed to target these two mutations. CX-3543 and CX-5461, two specific RNA polymerase I inhibitors, have proved to be effective in some hematologic and solid malignancies in I/II clinical trials (9). They can also inhibit the proliferation of CRC, which has defects in DNA damage repair (27). KRAS mutation was once considered untreatable with drugs. Fortunately, Canon et al. developed the first KRAS inhibitor, AMG 510, in 2019 (28). It was reported to cure mice with isogenic KRAS tumors, and demonstrated anti-tumor activity in the first dosing cohort in clinical trials (28). However, the effects of AMG 510 on ribosome synthesis are unclear. According to the results of the present study, BRIX1 may be a novel target for the treatment of CRC.

The present study had some limitations. First, we used a relatively small sample size, so further analysis of a deeper relationship between BRIX1 and CRC would be difficult. Second, immunohistochemistry was not performed in the present study. Immunohistochemistry may be beneficial to determine the location of the BRIX1 protein aggregation in cancer cells and to improve our knowledge of the mechanism of how BRIX1 affects the progression and development of CRC. Third, some parameters of surgical treatment may also affect the prognosis of patients, and this will need to be improved in future research.

The results of the present study indicate that BRIX1 expression was elevated in CRC tissues than in adjacent normal tissues. The elevated expression of BRIX1 was also positively correlated with CRC tumor stage and contributed to a lower overall survival rate for CRC patients.

Reporting Checklist: The authors have completed the MDAR reporting checklist. Available at http://dx.doi.org/10.21037/tcr-20-2564

Conflicts of Interest: All authors have completed the ICMJE uniform disclosure form (available at http://dx.doi.org/10.21037/tcr-20-2564). The authors have no conflicts of interest to declare.

Ethical Statement: The authors are accountable for all aspects of the work in ensuring that questions related to the accuracy or integrity of any part of the work are appropriately investigated and resolved. The study was conducted in accordance with the Declaration of Helsinki (as revised in 2013). The study was approved by the ethics committee of the Affiliated Nanjing Jiangbei Hospital of Nantong University (No. J2017034) and informed consent was taken from all the patients.