Ovarian cancer (OC) is a common malignant tumor in gynecology, and its morbidity and mortality rank among the highest among all forms of female-related cancer (1). Although great progress has been made in the development of therapeutic strategies for treating OC, most patients are diagnosed at an advanced stage because of the lack of effective early diagnostic methods, resulting in a poor 5-year survival rate of 25–30% (2). Tumor recurrence and metastasis are thought to be responsible for the poor clinical outcomes of OC. Fibulin-3 (also known as epidermal growth factor-containing fibulin-like extracellular matrix protein 1/EFEMP1) is a member of the fibulin glycoprotein family. Fibulin-3 functions mainly to maintain the stability of the basement membrane and stabilize the integrity of the extracellular matrix structure (3,4). Many studies have shown that Fibulin-3 is closely related to the development of various tumors. In pancreatic cancer (5), cervical cancer (6), glioblastoma (7), and osteosarcoma (8), high expression of Fibulin-3 suggests a poor prognosis. However, in nasopharyngeal carcinoma (9), breast cancer (10), non-small cell lung carcinoma (11), and endometrial cancer (12), Fibulin-3 was found to have potential tumor-suppressive effects. Thus, Fibulin-3 has shown varying effects in different tumor types.

Epithelial-mesenchymal transition (EMT) is a developmental process that is critical for cell differentiation, morphogenesis, and development. During this process, the epithelial cell morphology changes, cell-cell adhesion is disrupted, and polarity is lost. The characteristics of interstitial cells, particularly low adhesion, migration, invasiveness, and dissemination have become the basis of tumor cell invasion and metastasis (13). E-cadherin, Snail, and N-cadherin are important markers of EMT, and the deletion of E-cadherin expression is considered as an important marker of EMT (14,15).This study was to investigate the expression of Fibulin-3 in OC tissues, detect the expression of EMT-associated markers, E-cadherin, N-cadherin, and Snail in OC, explore the relationship between Fibulin-3 and E-cadherin, N-cadherin, and Snail as well as their relationship with OC invasion, metastasis, and prognosis. We present the following article in accordance with the REMARK reporting checklist (available at http://dx.doi.org/10.21037/tcr-20-984).

The study was conducted in accordance with the Declaration of Helsinki (as revised in 2013). The study was approved by the ethics committee of Chongqing Medical University (NO:2020-425) and informed consent was taken from all the patients. A total of 102 ovarian tissue specimens were used in this study, including 10 specimens of benign ovarian tumor, 8 specimens of borderline tumor, and 84 specimens of malignant tumors (66 cases of serous carcinoma, 6 cases of mucinous carcinoma, 5 cases of endometrial carcinoma, and 7 cases of clear cell carcinoma). The patients were not administered radiotherapy, chemotherapy, or other anti-tumor treatment before surgery. Samples were collected from patients admitted to the Department of Clinical Pathology of the First Affiliated Hospital of Chongqing Medical University from 2012 to 2014. Complete clinical, pathological, and follow-up data were available for all patients, and the selected cases were followed until the patient died or until the end of the study in May 2019. The follow-up time was 6–60 months and patient ages ranged between 38 and 72 years. According to the International Federation of Gynecology and Obstetrics (FIGO) classifications for staging OC, there were 37 cases of low-stage tumors (FIGO I + II) and 47 cases of high-stage tumors (FIGO III + IV). Based on the Shih and Kurman dualistic model (16), the cases were divided into: 23 cases of type I OC, 61 cases of type II OC. None of the patients received radiotherapy, chemotherapy, and other anti-tumor treatment before surgery. The pathological sections of the patients were reviewed, and archived surgical specimen paraffin blocks from the patients were used for sectioning.

All tissue specimens were fixed in 4% neutral formalin solution. The paraffin-embedded tissues were continuously sliced into thin sections of 4 µm and dried, followed by immersion in xylene solution and gradient ethanol solution to dewax and rehydrate the samples to obtain the immunological tissues. Staining was carried out according to the manufacturer’s instructions provided in the kit. Cervical cancer tissue sections (Fibulin-3-positive) were used as positive control (6), and phosphate-buffered saline was used as the blank control.

To evaluate the protein expression of Fibulin-3 in ovarian tissues, we obtained 102 human ovarian tissue samples. According to immunohistochemical staining, Fibulin-3 was mainly concentrated in the cell membrane and cytoplasm of OC tissues (Figure 1). Fibulin-3 expression was significantly higher in OC samples than that in benign ovarian tumor and benign ovarian tumors (Figure 1). To evaluate antibody specificity, the negative control and positive control were examined and the results are shown in Figure 2. As shown in Table 1, high expression of Fibulin-3 protein in OC was observed in 45.24% of samples (38/84), while those in benign ovarian tumors was 20% (2/10) and in borderline ovarian tumor was 0% (0/8). The difference between the three groups was significant (P<0.05). At more advanced clinical FIGO stages of OC, Fibulin-3expression was significantly higher (P<0.05). There were no significant differences among the different pathology types, age, grade types, or preoperative CA125 of patients with OC (P>0.05). 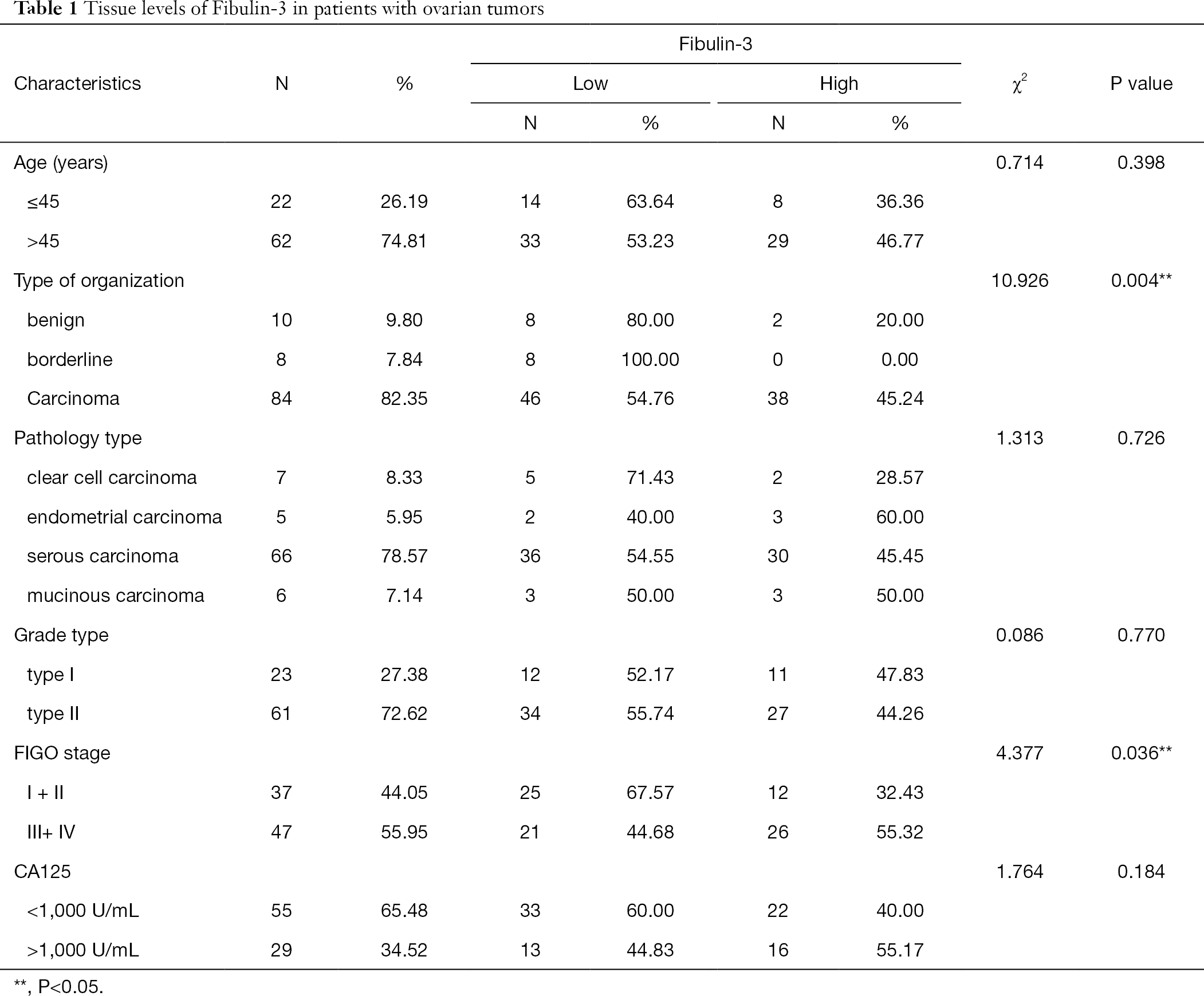 Correlation between the expression intensity of Fibulin-3, Snail, E-cadherin, and N-cadherin in OC tissues

Activation of EMT program promotes tumor cell invasion and metastasis. To further determine the correlations between Fibulin-3 and EMT makers (Snail, E-cadherin, N-cadherin), we performed immunohistochemical analysis of OC (Figure 3). According to Spearman correlation analysis, there was a negative correlation between Fibulin-3 and E-cadherin expression in OC (r=‒0.252, P=0.021). Fibulin-3 was positively correlated with Snail and N-cadherin expression in OC (r=0.644, P<0.001; r=0.451, P<0.001) (Table 2). 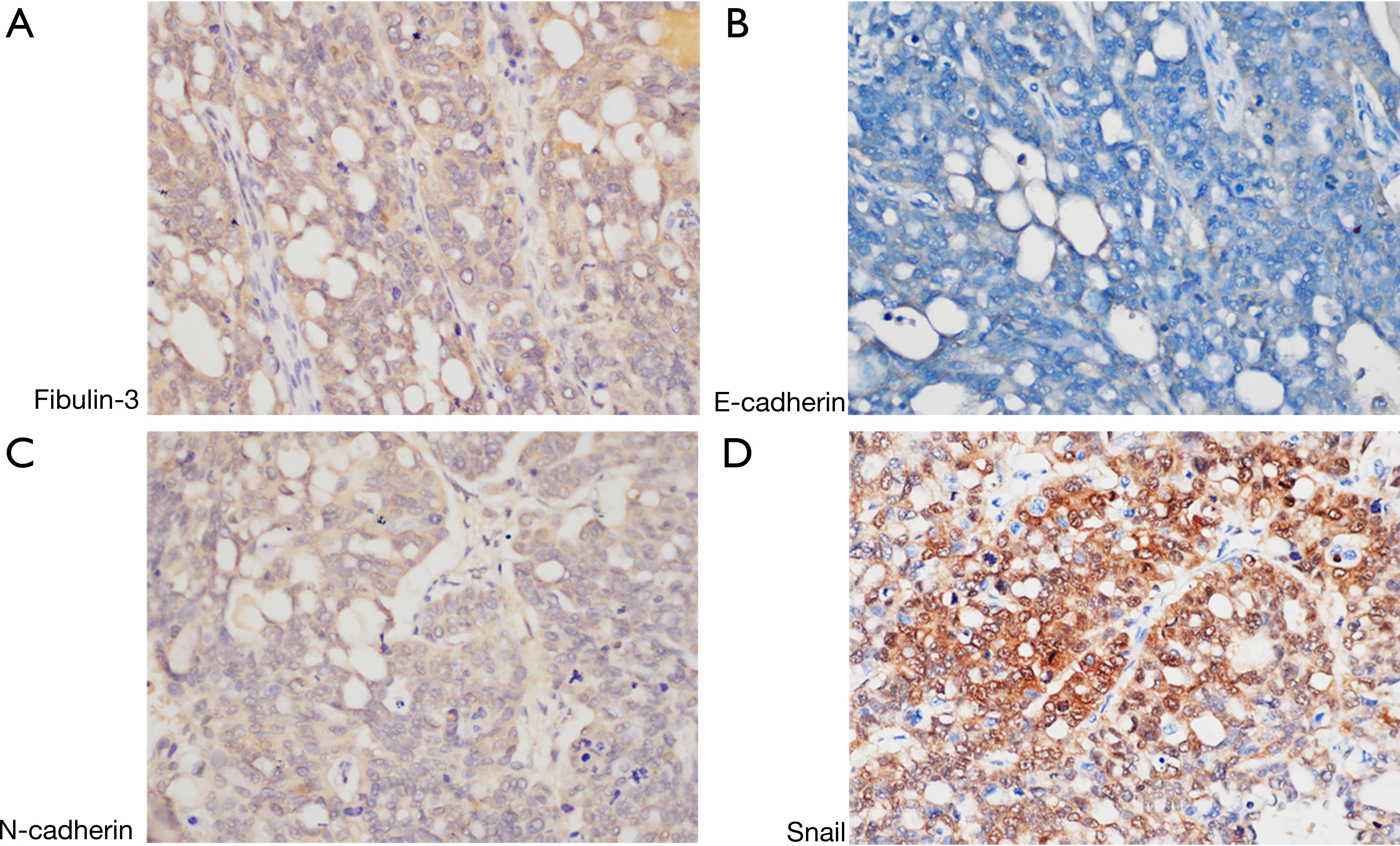 Univariate and multivariate analysis of prognostic variables in OC

The results of survival curve analysis are shown in Figure 4. The average 5-year survival rate of this group was 58.3%. Survival analysis using GraphPad Prism showed that survival rates of patients with high and low expression survival of Fibulin-3 were 23.6% and 89.1%, respectively, revealing a significant difference (P>0.05).

EMT has recently become a hot spot in the field of cancer research. EMT refers to the phenotype obtained by mesenchymal cells after epithelial cells undergo various biochemical changes (21). E-cadherin is a tumor suppressor gene; numerous studies have shown that inhibition of E-cadherin function or expression can cause cell morphology to transform into stromal cells resulting in cell migration, invasion, and metastasis (22-24). Some studies have shown that E-cadherin expression is gradually down-regulated in poorly differentiated serous carcinomas transformed from borderline serous tumors (25,26). N-cadherin, a mesenchymal marker of EMT, is also involved in the invasion and metastasis of tumors. The Snail family of transcription factors trigger EMT by inhibiting E-cadherin (27). Snail is the earliest known transcription repressor of E-cadherin expression in EMT, and its pathological activation allows tumor cells to acquire invasive characteristics. Fibulin-3 significantly affects the expression of several key factors in EMT. In some cancer cell lines, an interaction mechanism of Fibulin-3 and EMT has been suggested (6,8). In pancreatic adenocarcinomas, Fibulin-3 binds EGFR, causing autophosphorylation of EGFR at Tyr-992 and Tyr-1068 and subsequent phosphorylation of AKT at Thr-308 and ERK at Thr-202 and Tyr-204, thus accelerating the growth of pancreatic adenocarcinoma (5). In colon carcinoma, Fibulin-3 promotes cancer cell growth, migration, and invasion through a mechanism correlated with p38α and p38β activation (28). Fibulin-3 has been shown to facilitate cervical cancer cell development and metastasis by activating the PI3K-Akt-mTOR signal transduction pathway (6). In malignant gliomas, Fibulin-3 secreted by glioma cells activated DLL4-Notch signaling to induce proangiogenic behavior and promote glioma cell motility and invasion (29). In the present study, according to Spearman correlation analysis, when Fibulin-3 was overexpressed, E-cadherin was down-regulated, whereas N-cadherin and Snail were up-regulated. Fibulin-3 was negatively correlated with E-cadherin expression and positively correlated with the expression of Snail and N-cadherin expression. Finally, in multivariate analysis using Cox proportional hazard models, Fibulin-3 expression appeared to be an independent unfavorable prognostic factor. Based on our findings and those of previous studies, the Fibulin-3 pathway may be involved in EMT in OC, thereby causing cancer cell metastasis (30). High Fibulin-3 expression was found to be associated with poor prognosis in OC.

Fibulin-3 protein may play an important role in the occurrence and development of OC. Our results indicate that Fibulin-3 is overexpressed in OC and may promote tumor invasion and metastasis through EMT. Thus, Fibulin-3 may be useful as an independent predictive factor of poor prognosis of patients with OC. Further studies should be performed to evaluate whether Fibulin-3 can be used as a target for the clinical treatment of OC.

We would like to thank Key Laboratory of Life science (Chongqing, China) and Department of Pathophysiology for guidance and partial sponsorship.

Reporting Checklist: The authors have completed the REMARK reporting checklist. Available at http://dx.doi.org/10.21037/tcr-20-984

Conflicts of Interest: All authors have completed the ICMJE uniform disclosure form (available at http://dx.doi.org/10.21037/tcr-20-984). The authors have no conflicts of interest to declare.

Ethical Statement: The authors are accountable for all aspects of the work in ensuring that questions related to the accuracy or integrity of any part of the work are appropriately investigated and resolved. The study was conducted in accordance with the Declaration of Helsinki (as revised in 2013). The study was approved by the ethics committee of Chongqing Medical University (NO: 2020-425) and informed consent was taken from all the patients.