Lung cancer is the leading cause of cancer-related deaths worldwide (1). In China, lung cancer is the most prevalent cancer type and accounted for 25.2% and 29.5% of the total cancer incidence and mortality in 2012, respectively (2). Over one million people die from lung cancer globally every year, among which approximately 0.6 million are from China. Worse yet, the incidence of lung cancer is still increasing in China due to the high prevalence of cigarette use and other factors (3).

Non-small cell lung cancer (NSCLC) accounts for approximately 85% of all lung cancers and carries a dismal 5-year survival rate of 15% (3). Nevertheless, the International Early Lung Cancer Action Program Investigators reported that, among 302 participants with clinical stage I lung cancer who underwent surgical resection within 1 month after diagnosis, the survival rate was 92% (4). These results suggest that timely detection of lung cancer and appropriate treatment may prevent or interrupt cancer progression and improve overall survival rate. However, more than 75% of lung cancer patients are diagnosed at a locally advanced stage or with metastatic disease, partially due to the lack of an effective screening program for early detection (5). Therefore, simple, safe, and cost-effective methods to aid in early detection of lung cancer are greatly needed.

Tumor markers are molecules specifically expressed by tumor cells or produced by the host in response to tumors. Epigenetic changes of certain genes, such as DNA methylation, could occur at early stage of carcinogenesis, thus could be used as a type of tumor marker. DNA methylation based diagnostic devices has been used in screening of malignant diseases including colorectal cancer (6). SHOX2 gene is located on human chromosome 3. SHOX2 gene is widely expressed in tissue including skeleton, branchial arches, heart tissue and central nervous system (7). SHOX2 methylation is closely related to tumor occurrence and progression. In colorectal cancer, SHOX2 methylation could be used as a powerful biomarker for cancer screening and post-therapeutic monitoring (8). SHOX2 gene methylation status could also be used as potent prognostic parameter for predicting patient survival in lower-grade glioma patients (9). Recently, Dietrich et al. reported that SHOX2 methylation is a reliable biomarker for the diagnosis of lung cancer (10-14). Based on this potential, SHOX2 methylation has been developed as a commercially available assay, the Epi proLung BL Reflex Assay, for early lung cancer detection (13).

Specific DNA methylation can be measured by several polymerase chain reaction (PCR)-based methods, including methylation-specific PCR (MSP) and real-time quantitative PCR. The aforementioned commercial SHOX2 methylation assay detects SHOX2 methylation through the generation of bisulfate-converted template DNA followed by real-time PCR using TaqMan probes (13). While this is sensitive and quantitative, it is also relatively expensive. Compared with real-time PCR-based methods, MSP is much more cost-effective. It is also fast, sensitive, and specific, and has been widely used for DNA methylation analyses (15,16). Therefore, we chose to investigate the diagnostic value of SHOX2 methylation detection by MSP in lung cancer as this method may reduce costs and thus may facilitate the use of SHOX2 methylation in large-scale lung cancer screening, especially in developing countries where cost is a limiting factor. Specifically, we examined SHOX2 methylation by the MSP method in tumor tissue and corresponding non-tumor lung tissue from a cohort of Chinese NSCLC patients, and further analyzed the diagnostic value of SHOX2 methylation measured by MSP in NSCLC detection. We present the following article in accordance with the STARD reporting checklist (available at http://dx.doi.org/10.21037/tcr-20-887).

The study was conducted in accordance with the Declaration of Helsinki (as revised in 2013). The patients underwent surgery after providing informed consent, and the requirement for the individual consent of patients whose records were evaluated was waived because they were de-identified in the study. The study was approved by institutional ethics board of China-Japan Friendship Hospital (No. 2018-13-K08). A total of 89 NSCLC patients and 9 non-tumor patients were included in this study.

Clinicopathological characteristics of the participating patients with cancer or non-cancer are presented in Tables 1 and 2, respectively. All tumors in these patients were completely resected (R0 category) by surgery. Additionally, histologically normal lung tissue specimens obtained at surgery from 9 patients with no evidence of cancer were used as a control group (including 8 patients with pulmonary bulla and 1 patient with benign tumor). In the control group, 6 patients were men and 6 were under 60 years old. 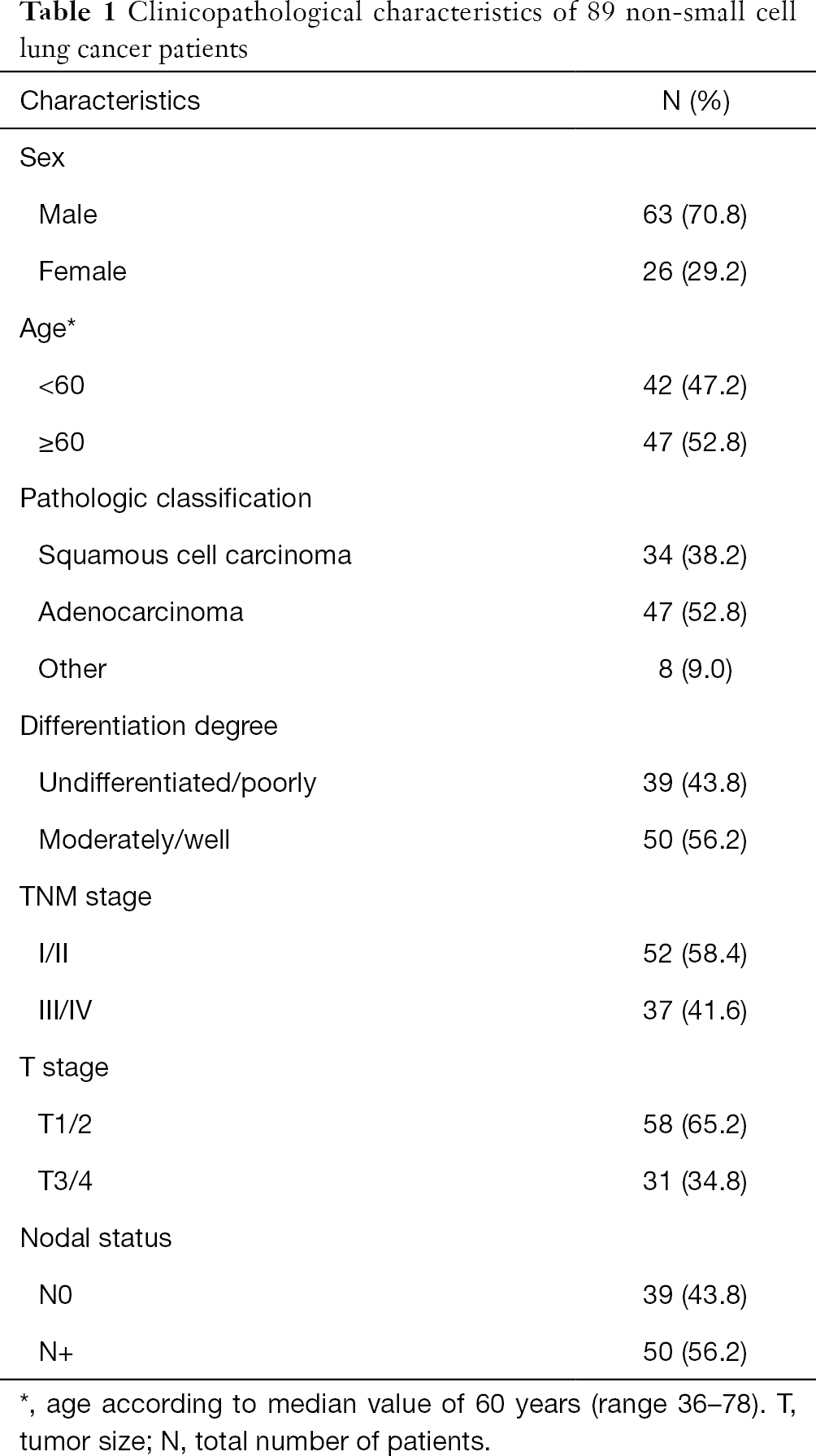 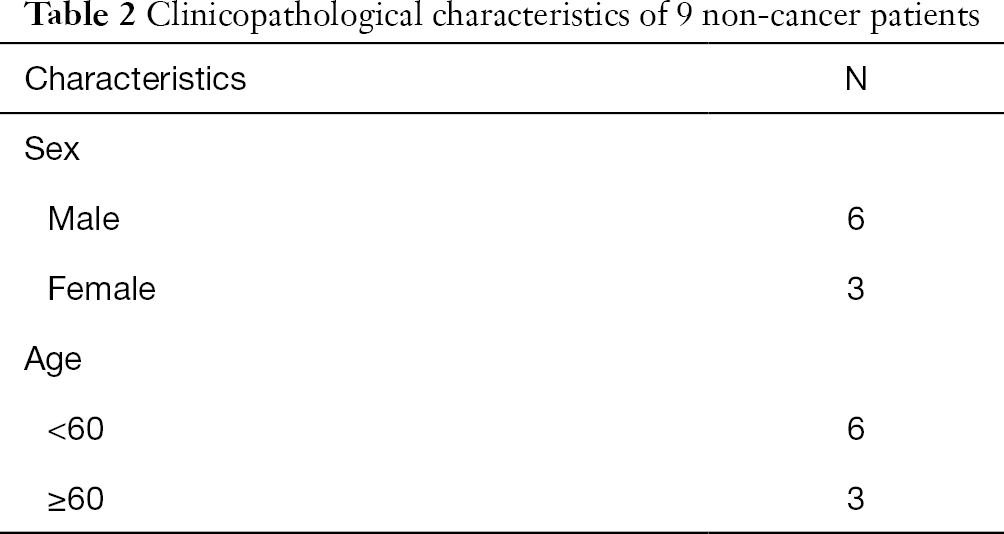 Tissues for DNA analysis were obtained immediately after lung resection before starting mediastinal lymphadenectomy and were frozen in liquid nitrogen. Tissues were analyzed as tumors or uninvolved lung tissues taken from the farthest distance from tumors. Ten µm thick frozen sections were taken from blocks of tumor tissues and stained with H&E for histopathological evaluation. Sections were pooled for analysis from areas of estimated 75% malignant cells. Genomic DNA was isolated from frozen tissue by standard methods of proteinase K digestion and phenol-chloroform extraction using Tiangen Cells and Tissue DNA Isolation Kit (Tiangen Biotech Co., LTD, Beijing, China) according to the manufacturer’s instructions.

A total of 500 ng genomic DNA extracted from tissue samples was modified by sodium bisulfite with DNA Methylation Detection Kit (BioChain, USA) according to the manufacturer’s instructions. 7 µL modified DNA was used for PCR in a total reaction volume of 25 µL. PCR program was set as 35 cycles of melting (95 °C for 30 s), annealing (58 °C for 30 s) and extension (72 °C for 30 s). The 25 µL reaction mixture contained 1× PCR Buffer (Mg2+ Plus), 200 µM of each dNTP, 0.5 µM forward primer, 0.5 µM reverse primer, and 0.5 unit of GoTaq Hot Start Polymerase (Promega, USA). PCR products were separated in 3% agarose gel supplemented with ethidium bromide. DNA was visualized under UV illumination. SHOX2 was recorded as methylated if MSP amplification products were detected in both reactions with unmethylation and methylation primers, or with methylation primers only. The primer sequences are as follows:

Statistical comparisons were performed using either the χ2-test or Fisher’s exact test, as appropriate. Student’s t-test was performed to assess the statistical significance between the mean values. All data were analyzed by SPSS software (SPSS Statistics 19, Rel. 19.0. 2010. Armonk, NY: IBM Corp.). P values less than 0.05 were considered to be statistically significant.

The characteristics of the NSCLC patients 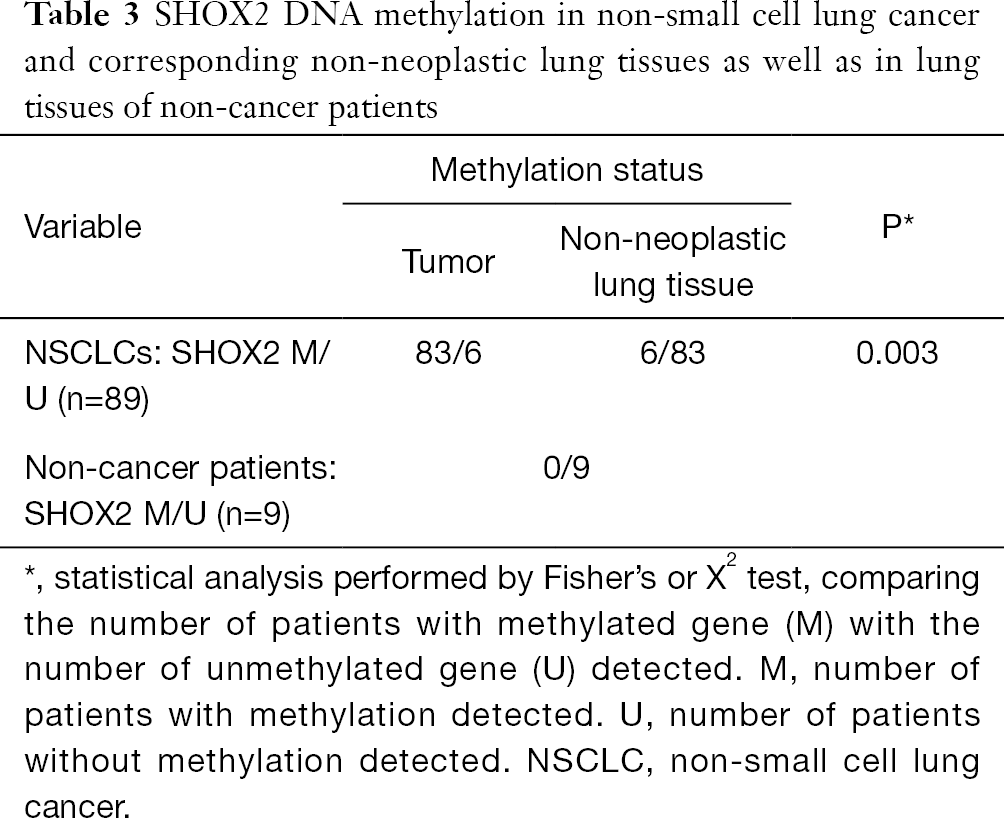 Association of SHOX2 methylation with clinicopathological variables in Patients with NSCLCs

In this study, we applied MSP to detect the methylation status of the SHOX2 gene in tumor tissues and corresponding non-tumor lung tissues in 89 Chinese NSCLC patients and found that SHOX2 methylation is significantly correlated with NSCLC. This findings are consistent with prior studies (10,11) and support that SHOX2 methylation may be a useful biomarker for lung cancer diagnosis.

At present, both qualitative and quantitative methods are used to measure DNA methylation of specific genes. Despite the lack of quantitative information obtained from real-time PCR based methods, MSP is widely applied in clinical researches for DNA methylation because it is fast, simple, specific, requires resources commonly available in a molecular genetics laboratory, and is very cost-effective (16-22). MSP is also sensitive in that it can detect as low as 0.1% (50 pg of methylated DNA out of 50 ng of total DNA) to 1% (0.1 ng of methylated DNA out of 10 ng of total DNA) methylated alleles (23-25). By using Quantitative HeavyMethyl (HM) real-time PCR, Dietrich et al. reported hypermethylation of the SHOX2 locus in tumor tissue in 96% of tumors from a group of 55 patients with lung cancer (12), where as in our current study, SHOX2 methylation was detected in 93.3% tumor tissues from the cohort of 89 NSCLC patients. These results suggest that MSP may be used as a cost-effective alternative in detection of SHOX2 methylation in the diagnosis of NSCLC. The development of this simple, low-cost MSP method may facilitate the wide use of detection of SHOX2 methylation in large-scale NSCLC early screening, especially in developing countries.

DNA methylation is an important epigenetic modification in cancer. Aberrant methylation of the promoter region in a specific gene causes gene silencing. Hence, methylation of tumor suppressor genes is an early and frequent event during carcinogenesis (26). SHOX2 is a member of the homeobox family and plays important roles in embryonic morphogenesis, heart, skeleton, and nervous system development (27-35). In addition to its involvement in early development, human SHOX2 has been found to be expressed in tumors including neuroblastomas and breast cancer (36,37). Although SHOX2 methylation is demonstrated to be an excellent biomarker in lung cancer diagnosis, whether the SHOX2 gene qualifies as a tumor suppressor gene is not clear. Interestingly, unlike hypermethylated tumor suppressor genes that are down-regulated in tumors, elevated SHOX2 expression was reported to be associated with tumor recurrence of hepatocellular carcinoma (38). However, the mechanism of increased expression of SHOX2 in hepatocellular carcinoma is unknown. Dietrich et al. found that SHOX2 was expressed at similar transcriptional levels in tumor tissue and normal adjacent tissue from lung cancer patients (12). The authors further reported that SHOX2 methylation was correlated with SHOX2 gene amplification (12) caused by genomic gain of chromosome 3q involving theSHOX2 gene, which has been recognized as one of the most prevalent and significant chromosomal rearrangements in lung cancer (39,40). Therefore, the up-regulation caused by SHOX2 gene amplification may counteract the negative regulatory effect associated with SHOX2 methylation, and thus no significant expression change was detected between lung tumor and paired non-tumor lung tissues. Furthermore, the consistency of SHOX2 methylation observed in lung cancer tissue from Chinese patient samples reported herein and from Dietrich’s work in European people (12) suggests that the epigenetic modification of SHOX2 seems similar in populations with different genetic backgrounds. The conflicting results of the expression of SHOX2 in hepatocellular carcinoma and lung cancer indicate that a lot of work remains to be done to clarify the relationship between SHOX2 expression and methylation in different tumors, as well as the molecular mechanisms of SHOX2 regulation.

Reporting Checklist: The authors have completed the STARD reporting checklist. Available at http://dx.doi.org/10.21037/tcr-20-887

Conflicts of Interest: All authors have completed the ICMJE uniform disclosure form (available at http://dx.doi.org/10.21037/tcr-20-887). The authors have no conflicts of interest to declare.

Ethical Statement: The authors are accountable for all aspects of the work in ensuring that questions related to the accuracy or integrity of any part of the work are appropriately investigated and resolved. The study was conducted in accordance with the Declaration of Helsinki (as revised in 2013). The study was approved by institutional ethics board of China-Japan Friendship Hospital (No. 2018-13-K08). The patients underwent surgery after providing informed consent, and the requirement for the individual consent of patients whose records were evaluated was waived because they were de-identified in the study.