Lung cancer has always been the leading cause of cancer death in all populations worldwide (1). Conventional chemotherapies used to be the cornerstone for treatment in advanced non-small cell lung cancer (NSCLC) cancer patients (2). During the past three decades, the discovery of driver genes and target therapies have significantly improved the outcome in oncogenic-addictive NSCLC patients (3,4). BRAF was proto-oncogene encoding a serine/threonine-protein kinase which promotes cell proliferation and survival (5). BRAF mutations are commonly seen in melanoma (6) and papillary thyroid carcinoma (7) and also played as one of the major oncogenic drivers occurring in 2–4% NSCLC patients (5,8). BRAF mutations are mainly localized in the kinase domain and about 50–80% of them are V600E mutation (9,10). However, the prognostic value of V600E mutation remains unclear (9,11) and non-V600E mutated cases showed distinctive and complicated characteristics from V600E mutant carriers (9).

Based on the increasing knowledge of the biological activation mechanism and response of inhibitors in NSCLC patients with BRAF mutations, a functional mutation classification system has been established recently (12,13). In detail, class 1 mutants refer to the RAS-independent kinase-activating V600 monomers; class 2 mutants refer to the RAS-independent kinase-activating dimers which are resistant to vemurafenib; class 3 refer to the RAS-dependent kinase-inactivating heterodimers. Previous data showed that the advanced NSCLC patients with BRAF mutation (18 cases with V600E and 18 cases with non-V600E) had similar OS compared with patients without BRAF mutation, however, V600E-mutated patients tended to have shorter PFS after platinum-based chemotherapy compared with non-V600E-mutated patients (4.1 vs. 8.9 months; P=0.297) (14). Increasing data support the recommendation of BRAF and downstream pathway targeted therapy in advanced NSCLC patients with V600E mutation (15). However, the prognosis and treatment recommendation for patients with non-BRAF V600 mutations remains controversial (16,17). BRAF inhibitor in the combination of downstream targets such as MEK inhibitor may be better than monotherapy by reducing the drug-resistance in patients with non-BRAF V600 mutations (18).

Although target therapy should be the promising first-line treatment for patients with BRAF mutations, most of them still have to accept chemotherapy in conditions of inaccessible to target agents or progression from target therapy (19). Besides, the advance of molecular testing method could help us to explore more non-V600E mutations which would potentially contribute to the biological development of disease (20). Recently, results from one large cohort study from France showed that no clear evidence supports the influence of BRAF status in outcomes of patients treated with chemotherapy and patients treated by the first-line taxane had the poorest PFS (19). In this study, we aimed to explore the clinical value of the functional classification of BRAF mutations and optimizing the selection of chemotherapy in this cohort study. We present the following article in accordance with the STROBE reporting checklist (available at http://dx.doi.org/10.21037/tcr-20-480).

We conducted a multicenter, retrospective study involving several hospitals in China between May 2014 and May 2019. The genetic alterations results obtained from 3,669 plasma or tissue samples of NSCLC patients who underwent the next-generation sequencing (NGS) detection, and IIIB-IV with BRAF mutations were 41 cases. Histology subtyping was determined according to the 2015 World Health Organization classification. Tumor stage was based on the 7th edition of the Lung Cancer Staging system from the American Joint Committee on Cancer. Age, smoking status, East Cooperative Oncology Group performance status, histology, disease stage, brain or bone metastasis, and molecular information were documented at first diagnosis. All clinical information, including diagnosis, treatment, and clinical outcome, was collected through the system and confirmed by local professional oncologists. Patients were followed from the date of diagnosis until the date of death from all causes or last approachable follow-up. Tumor response was evaluated according to the Response Evaluation Criteria in Solid Tumors (RECIST v1.1) (21). The treatment response was evaluated by CT scans at the baseline of initial therapy and every 6 weeks thereafter. The study was conducted in accordance with the Declaration of Helsinki (as revised in 2013). This study was approved by the Chinese Academy of Sciences University Cancer Hospital (Zhejiang Cancer Hospital) Ethics Committee (No.: IRB-2020-188) and written informed consent was obtained from each patient to use the clinical data for research before the medical intervention started.

Kaplan-Meier curves and the two-sided log-rank test were used for univariate survival analyses. The Cox proportional hazards model was used to complete the uni- and multivariate survival analyses with the hazard ratio (HR) and corresponding 95% confidence interval. Progression-free survival (PFS) was defined as the time from the date of initial treatment to the date of systemic progression or death or censored at the date of last follow up, whichever came first to trigger the event. Significance between groups was defined as P values <0.05. Statistical analyses were performed using the R software/environment (URL http://www.R-project.org). 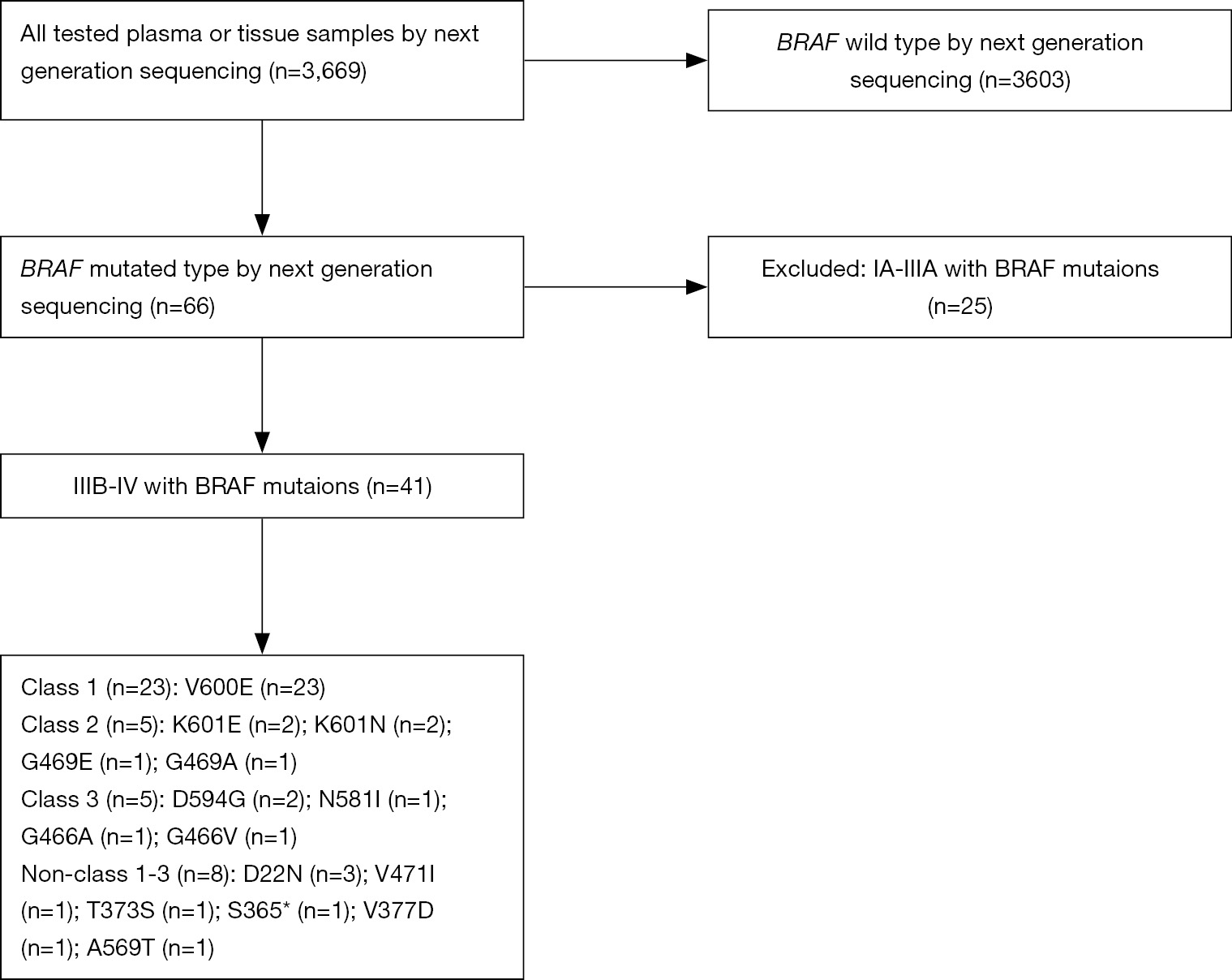 Forty-one patients with IIIB/IV stages of NSCLC had BRAF mutations. The BRAF mutants in this study were classified into four groups according to reference (22), included class 1 [n=23 (56.1%)], class 2 [n=5 (12.2%)], class 3 [n=5 (12.2%)], and others [n=8 (19.5%)] (Table 1, Figure 2). Eight patients were stage IIIB and 33 were stage IV according to the IASLC classification of lung adenocarcinoma. The detailed characteristics are listed in Table 2. Collectively, the frequency of BRAF mutants included 97.6% (40/41) point mutations and 2.4% (1/41) missense mutation. The concurrent oncogenic alterations included EGFR (n=3), KRAS (n=1), EML-ALK (n=1) (Figure 2). The baseline clinic-genetic characteristics and chemotherapy in all patients and comparison among the four groups of patients were shown in Tables 2 and 3, respectively. No significant difference existed concerning age, gender, ECOG PS, clinical stage at diagnosis, smoking status, brain and bone metastasis, concurrent oncogenic mutations, and first- and second-lines of pemetrexed-based chemotherapy among four groups (Table 3). 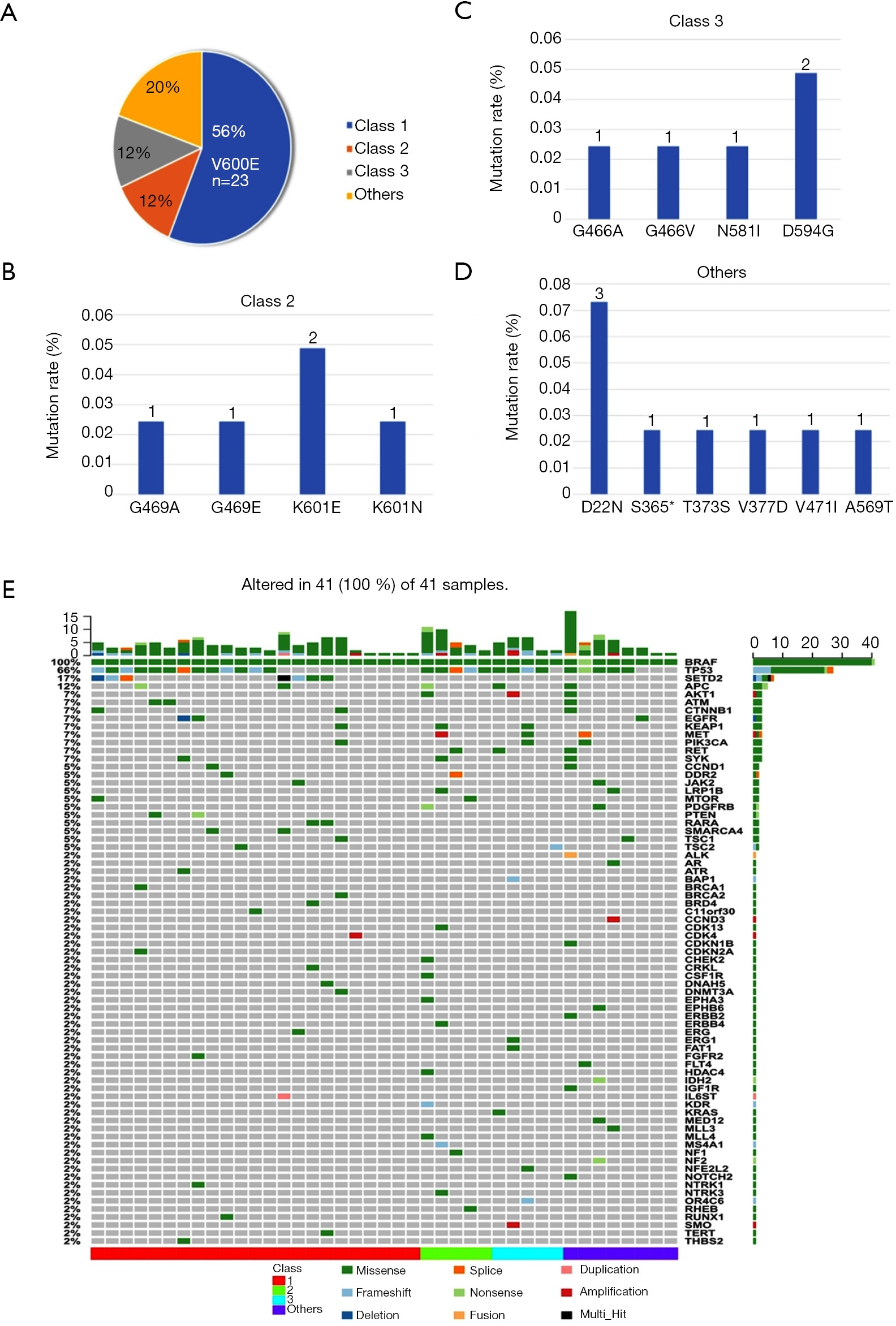 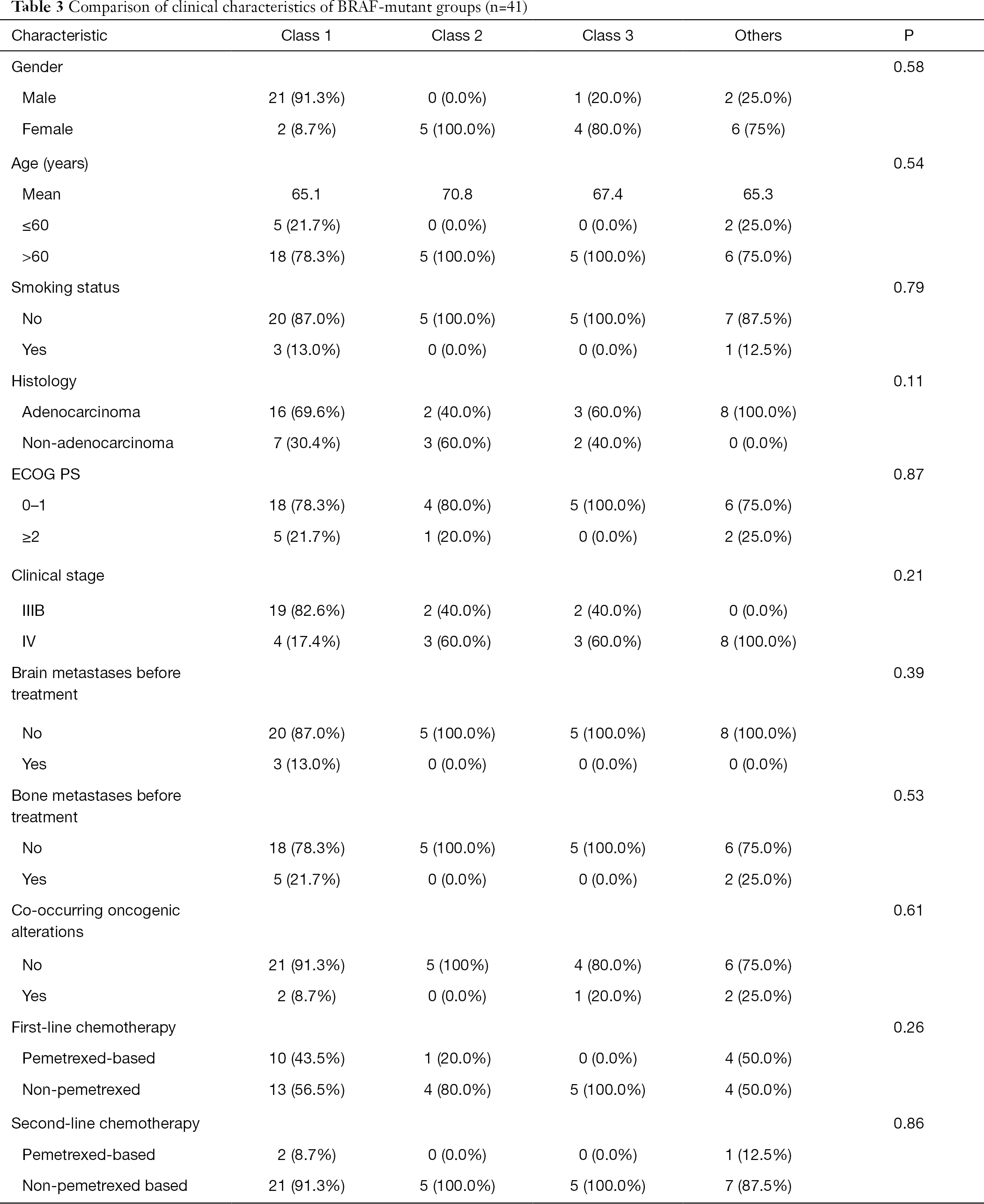 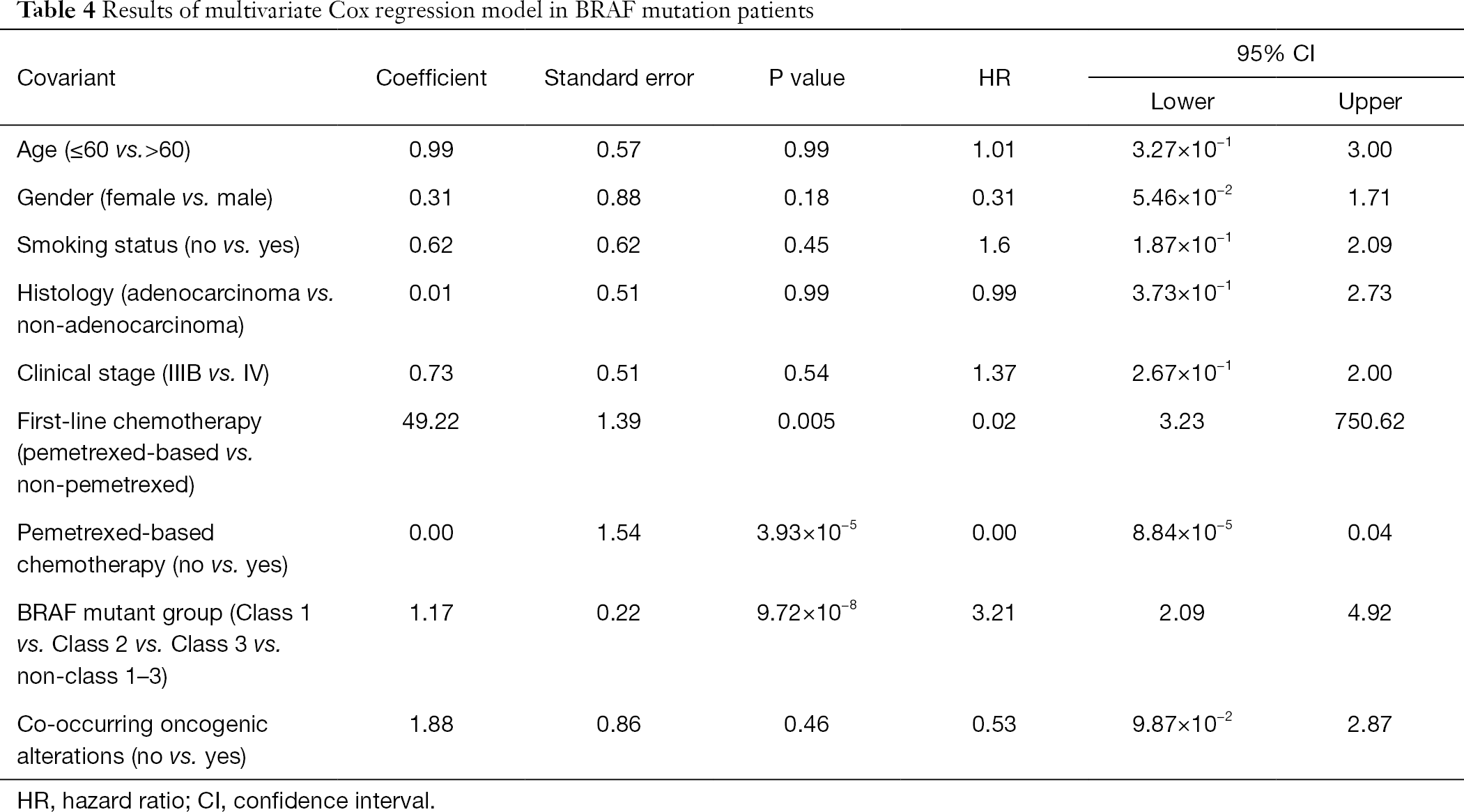 BRAF mutations in NSCLC have been well-known as the unique driver-gene alterations than common mutations (23). Dagogo-Jack et al. (24) reported a significantly longer OS for BRAF-mutant NSCLC patients with class 1 than other classes after first-line chemotherapy (1 vs. 2, P<0.001; 1 vs. 2, P=0.023). However, Lin et al. (22) found comparable OS outcomes among all classes of BRAF mutation by 28.6, 13.9 and 20.2 months for classes 1, 2 and 3, respectively (P=0.585). The controversy of those results may intratumor heterogeneity of BRAF mutations and response to different regimens of chemotherapy. Nevertheless, according to the available evidence, patients with class 2 and 3 appeared to have a worse outcome than patients with class 1.

Before the BRAF mutation story initiated from melanoma to the unique subset in NSCLC (25), conventional platinum-based chemotherapy is the cornerstone treatment in advanced NSCLC patients with BRAF mutations (26). Platinum-based chemotherapies were not effective in metastatic NSCLC patients with BRAF V600E (14). Therefore, searching for better chemotherapeutic agents become very important when target therapy is inaccessible. Pemetrexed is a multitargeted antifolate and it could be used in combination with platinum in first-line or monotherapy for subsequent lines and as well as maintenance therapy (27). Over eight years survival benefit from pemetrexed treatment in an advanced NSCLC case with BRAF mutation has been reported in Japan recently (28). The higher frequency of adenocarcinoma (69.6%) in patients with class 1 BRAF mutation could also indicate the potential better response to pemetrexed based chemotherapy (29). Liang and colleagues have launched interesting research on long-term pemetrexed response in NSCLC with driver oncogenes (30). Although BRAF mutation has not included in their research, the mechanism of significantly better survival from long-term pemetrexed response in oncogenic-addiction patients should be explored.

We have also explored the concurrent driver genetic alterations in this study. The advanced NSCLC patients with BRAF mutation have seldomly co-occurrence with other driver genes (5). Under screening by the known driver-gene panel in NSCLC, only 5 patients have been detected and three of them harboring EGFR mutation have received icotinib. The other two patients with KRAS A146T and EML4-ALK respectively did not receive any target therapies. Of note, two patients with class 1 BRAF mutation co-occurring with EGFR mutation but not KRAS consistent with mutual exclusivity existed between class 1 BRAF mutation and KRAS mutation in a previous study (22).

There are some limitations to our research. Firstly, this is a retrospective study and the enrollment of patients could be biased. However, it is not easy for us to collected patients with a rare mutation from a large cohort by NGS testing. Secondly, although the standard recommendation for patients with BRAF V600E mutation should be the combination of BRAF and MEK inhibitors (31), none of the patients have ever been treated by targeted therapy due to numeric reasons. We believe that the value of our research is to pursue the most available and effective chemotherapy for those patients who could not afford those expensive targeted drugs outside of clinical trials.

Reporting Checklist: The authors have completed the STROBE reporting checklist. Available at http://dx.doi.org/10.21037/tcr-20-480

Conflicts of Interest: All authors have completed the ICMJE uniform disclosure form (available at http://dx.doi.org/10.21037/tcr-20-480). The authors have no conflicts of interest to declare.

Ethical Statement: The authors are accountable for all aspects of the work in ensuring that questions related to the accuracy or integrity of any part of the work are appropriately investigated and resolved. The study was conducted in accordance with the Declaration of Helsinki (as revised in 2013). The study was approved by the Chinese Academy of Sciences University Cancer Hospital (Zhejiang Cancer Hospital) Ethics Committee (No.: IRB-2020-188) and written informed consent was taken from all the patients.