Gastric cancer (GC) is one of the most common cancers today, and the third-most common cause of cancer-related deaths (1). Most GC patients are diagnosed in the advanced stages of the disease because it is often asymptomatic in the early stages (2), and therefore, the prognosis is poor (3). However, the molecular mechanisms of GC initiation and development are still unclear (3), and it is necessary to further investigate these mechanisms.

Gene expression omnibus (GEO) is a public and free database for storage and extraction of genomics data and currently stores 4,348 datasets, 115,586 series, and 3,146,641 samples (July 2019). We screen for differentially expressed genes (DEGs) in the GEO database to be able to explore molecular signals, correlate regulatory genes, and analyze protein-protein interaction (PPI) networks to ultimately obtain a deeper understanding of tumors. In recent years, there have been numerous studies based on the GEO database to discover DEGs in a variety of cancers. Tang et al. (4) and Jin et al. (5) used GEO datasets in their studies to obtain a deeper understanding of the molecular mechanisms involved in tumor formation and proliferation.

In this study, we mined two GEO datasets to identify significant DEGs associated with poor GC prognosis and to elucidate the underlying mechanisms.

We identified DEGs with fold change >2 and adjusted the P value <0.05 via the GEO website tool-GEO2R (6). Following this, the online Venn software was used to detect common DEGs from the raw data (7). The DEGs identified were defined as those that were up-regulated (log FC >2) or down-regulated (log FC <−2).

DAVID’s tool can identify the functions of genes or proteins (8), and it was employed for gene ontology (GO) and KEGG analyses (P<0.05). GO analysis is used to identify genes and their RNA or protein products in order to determine unique biological properties from high-throughput transcriptomic or genomic data (9). KEGG is a database that deals with genomes, biological pathways, diseases, drugs, and chemical substances (10).

The PPI information was evaluated by STRING (11). To examine the potential correlation between the identified DEGs, we imported the raw data to the Cytoscape software (12) and set the following parameters: maximum number of interactors =0 and confidence score ≥0.4. In addition, we checked the modules of the PPI network via the MCODE app in Cytoscape, with the following parameters: degree cutoff =2, maximum depth =100, k-core =2, and node score cutoff =0.2.

The survival of GC patients expressing the core genes was analyzed using the Kaplan Meier-plotter (12), which was based on some public datasets (13). The P value and hazard ratio were computed with 95% confidence.

Oncomine and GEPIA databases were used to test the expression levels of the mRNAs of the hub genes in GC. Gene expression profiling interactive analysis (GEPIA v1.0) performs DEG analysis, correlation analysis, patient survival analysis, similar gene detection, and dimensionality reduction analysis based on the data from TCGA and GTEx (14). Oncomine (v4.5) was used to collect 729 gene expression datasets and the data of 86,733 samples. Using Oncomine, differential expression analysis and co-expression analysis can be performed to identify DEGs in a certain cancer and determine the target gene (15). In this study, we discovered the expression of eight core genes using GEPIA, with a threshold of P<0.05 and fold change =2, and using Oncomine, with a P value <1E-4, fold change =2, and gene rank =10%.

Determination of the protein expression levels of the hub genes

The human protein atlas database (HPA v18.1) provides abundant transcriptome and proteome data via immunohistochemistry and RNA-sequencing analyses (16). In this study, the protein expression levels of the core genes were determined by immunohistochemistry.

DEGs of GC in the two GEO datasets

We used 121 cancer and 31 healthy tissue samples. Using GEO2R website tool, we identified 415 DEGs from GSE79973 and 768 DEGs from GSE54129, and these genes were plotted on a Volcano plot using software R (version 3.6.0) (Figure 1). We used an online tool to produce a Venn diagram in order to extract the DEGs common between the two datasets. Finally, 164 common DEGs were detected. Of these, 42 were found to be up-regulated and 122 were found to be down-regulated genes in the GC tissue samples (Table 1, Figure 2). 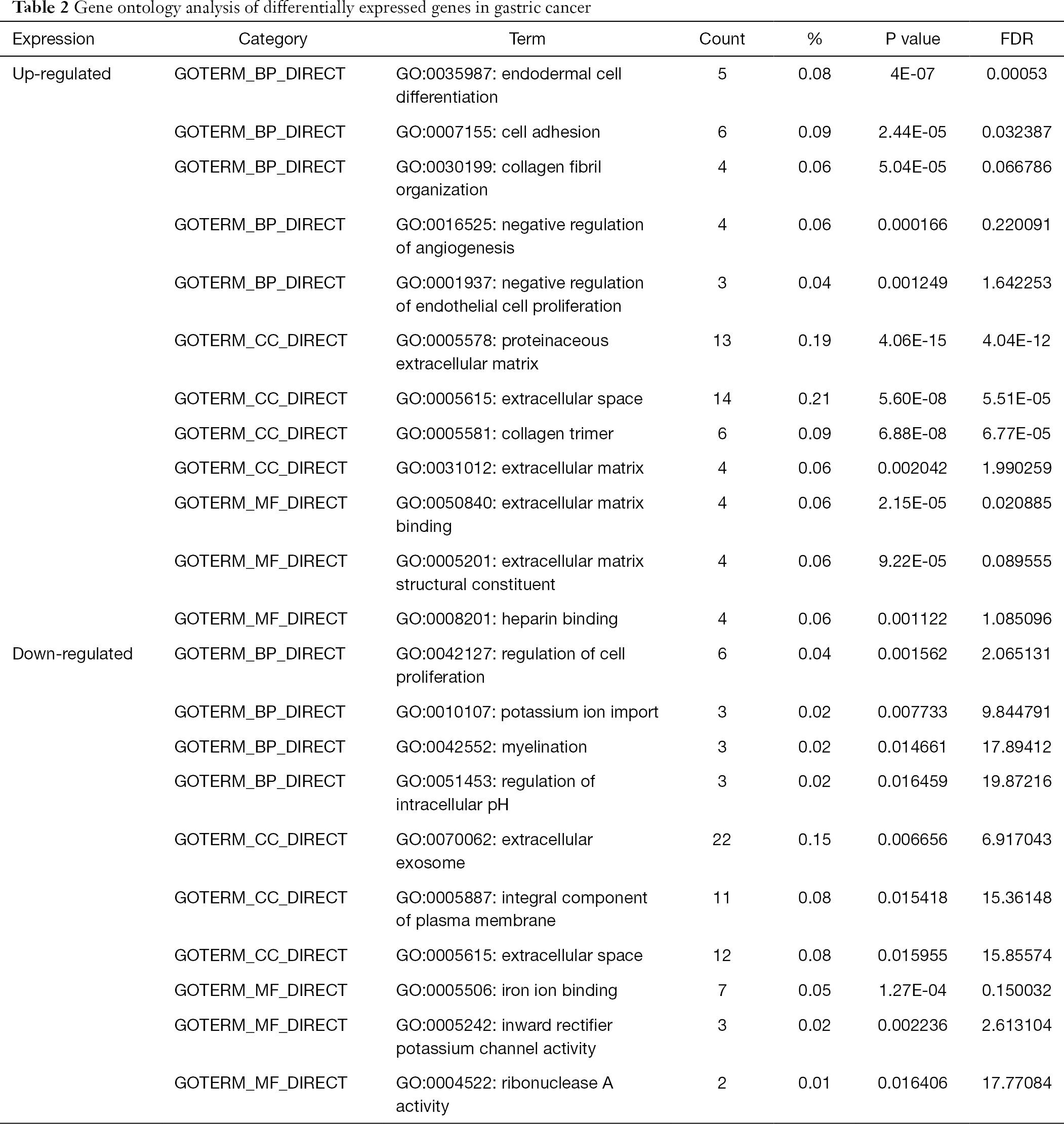 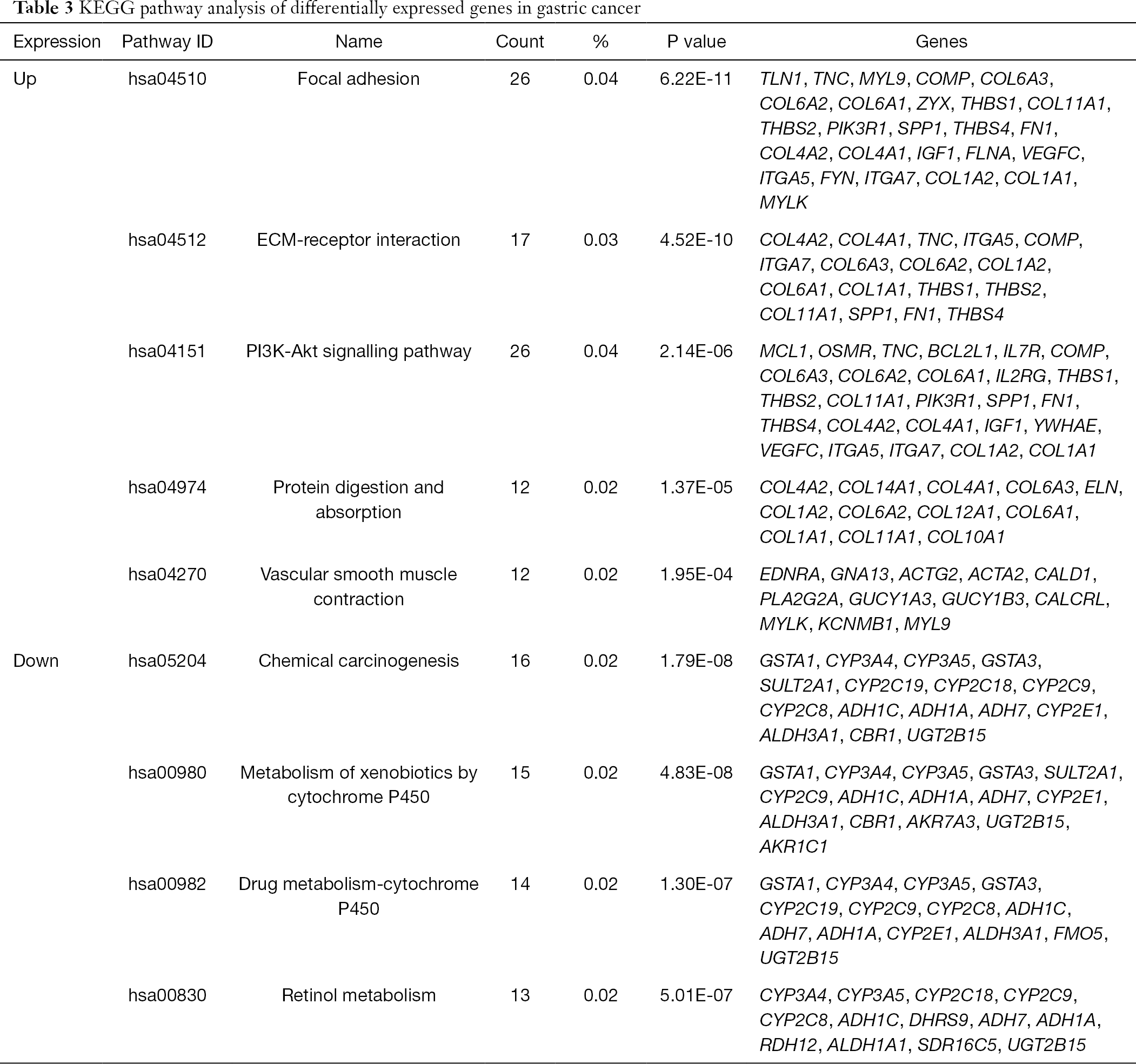 The 164 DEGs were imported into Cytotype software to obtain a PPI network which included 109 nodes and 269 edges (Figure 3A). Using Cytotype MCODE to carry out an in-depth analysis, we identified 13 central nodes among the 109 nodes, all of which corresponded to up-regulated genes (Figure 3B). 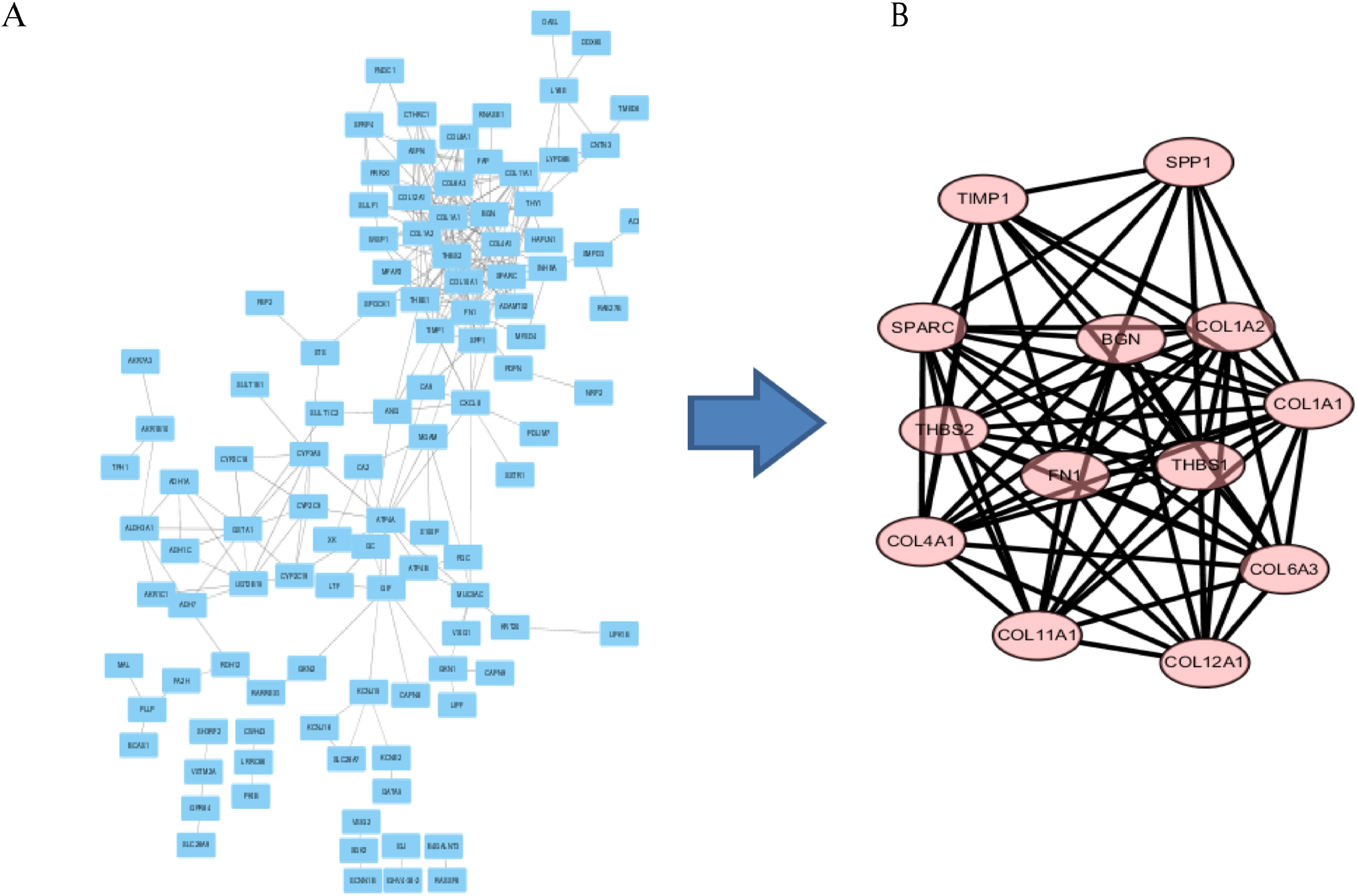 Figure 3 PPI network of the differentially expressed genes. The nodes indicate proteins; the edges indicate the interaction between proteins.

To evaluate the survival data for the 13 core genes, we used the Kaplan Meier-plotter. This revealed that 12 of the genes had a significantly worse survival rate while data for THBS1 was not significant (P<0.05, Figure 4). 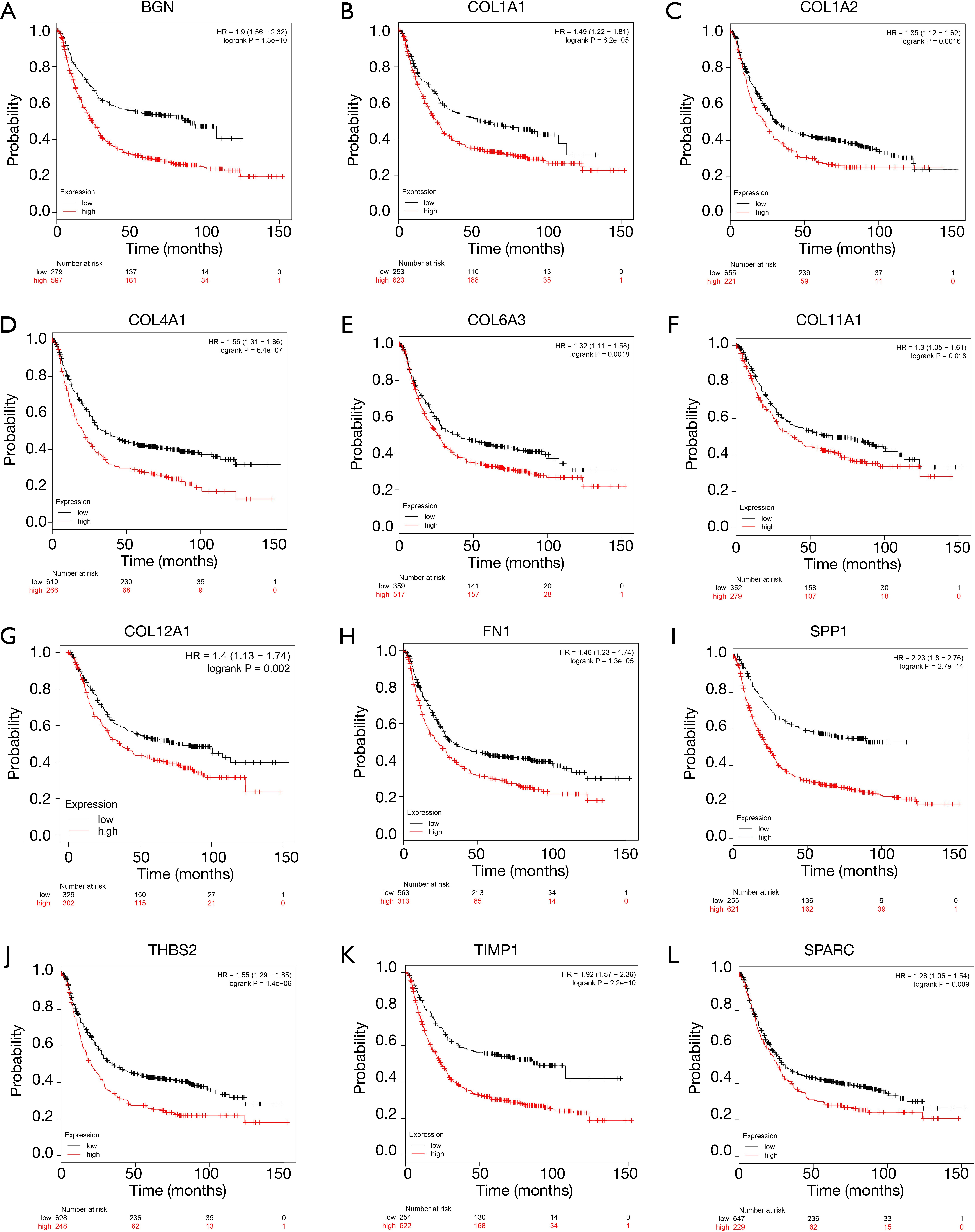 mRNA levels of the 13 hub genes were evaluated in cancer and healthy tissue samples via GEPIA. This revealed that 12 of these genes (all except THBS1) were highly expressed in GC specimen in contrast to normal gastric samples (P<0.05, Figure 5). 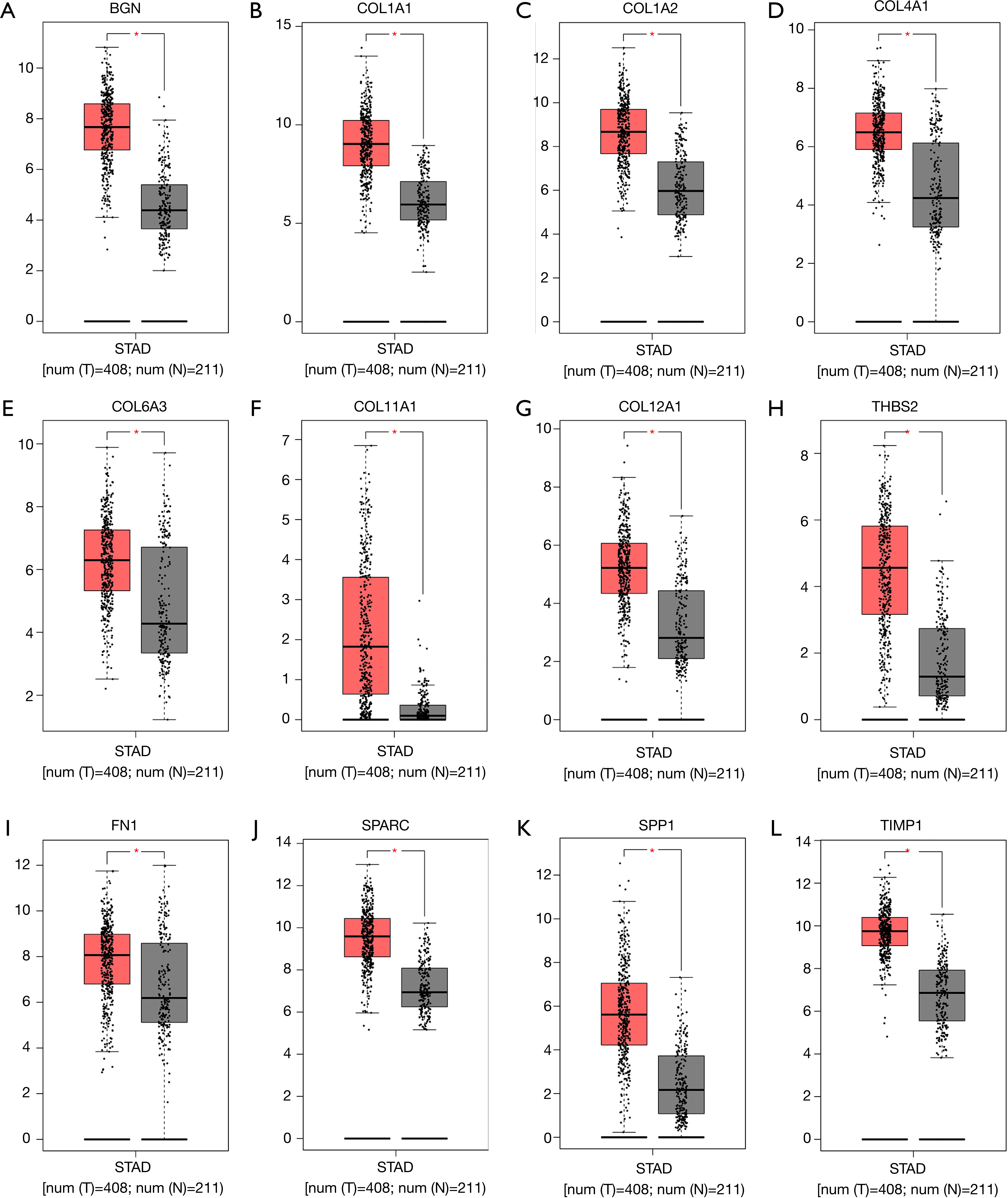 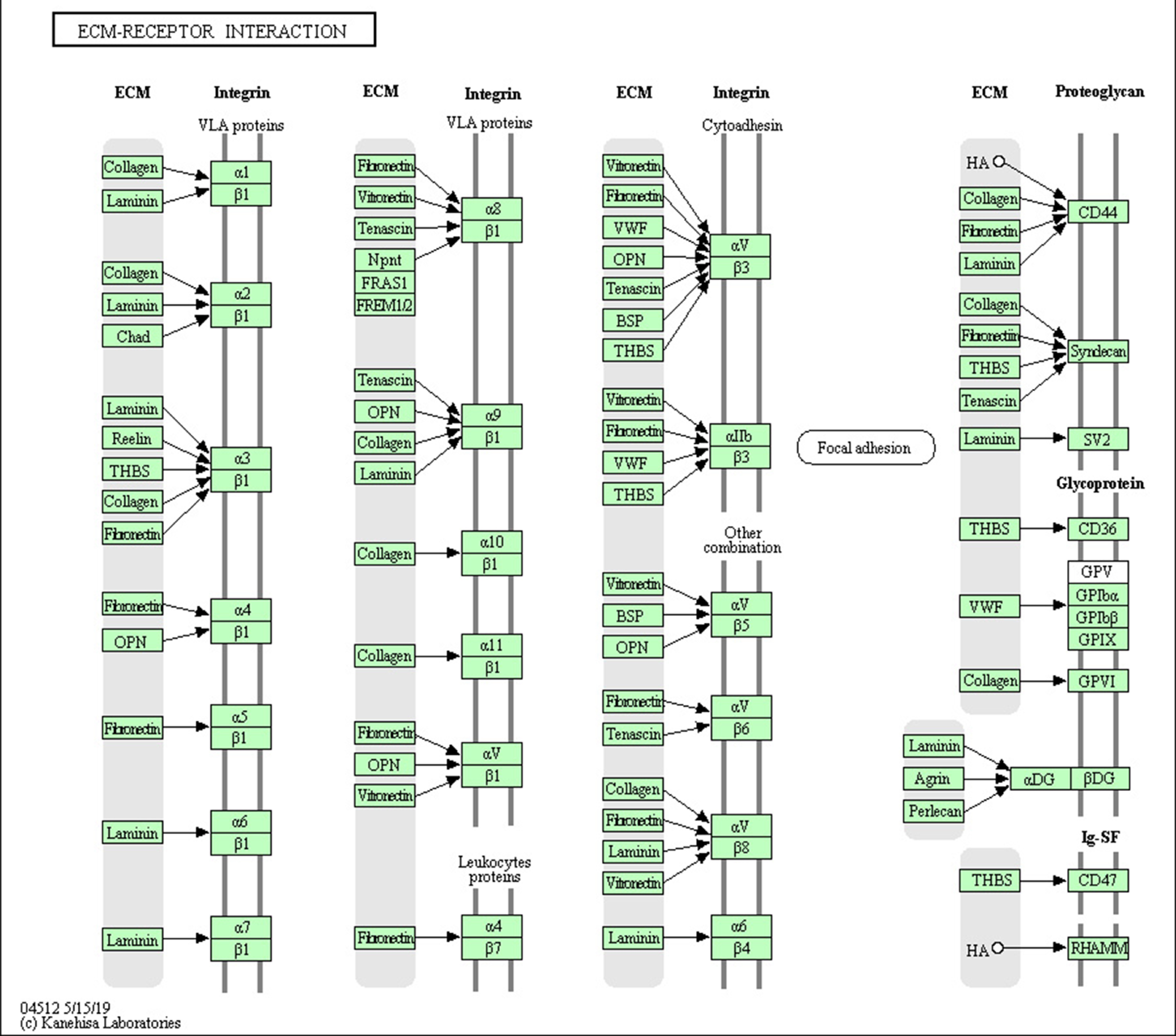 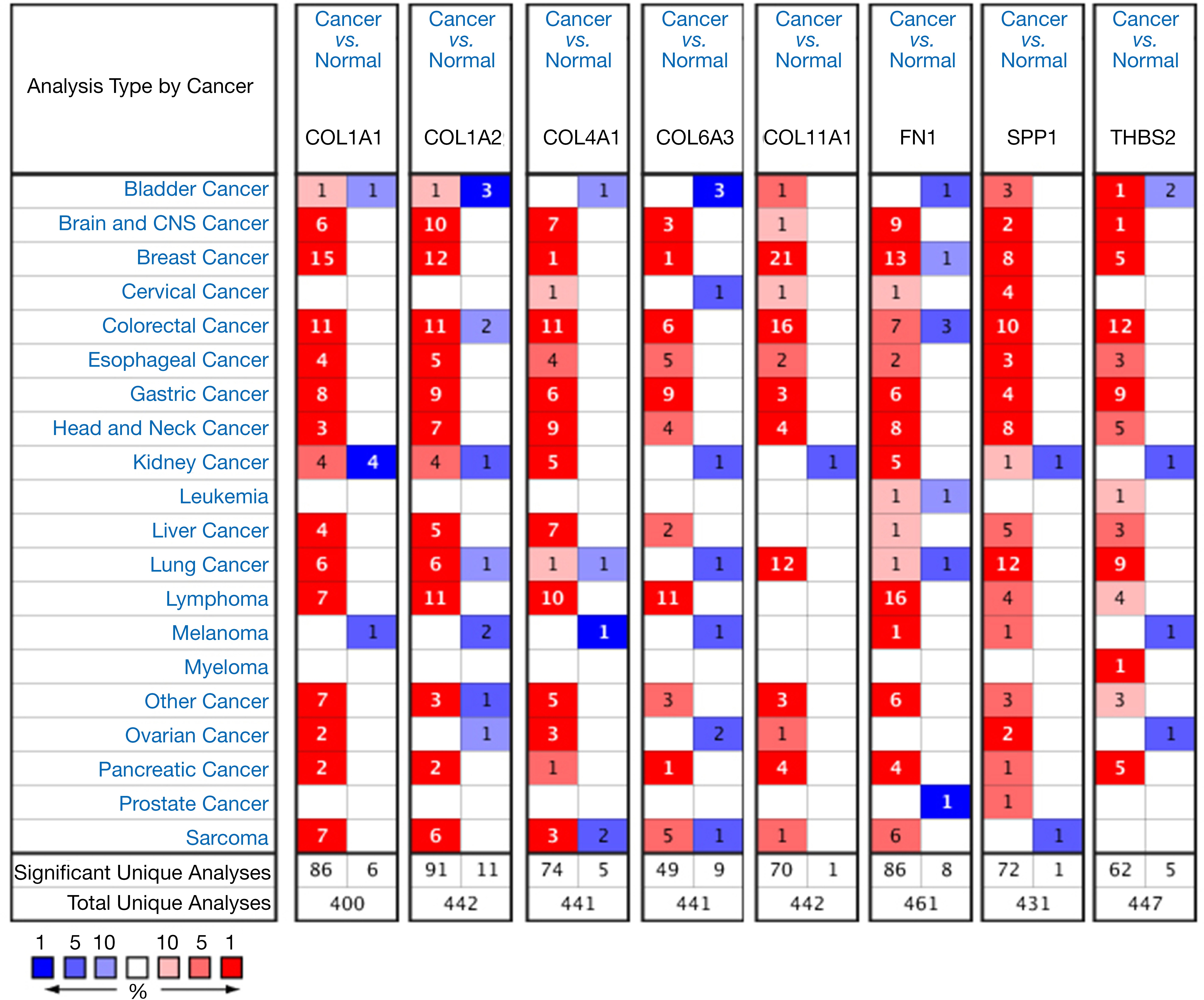 GC is the fifth most frequent cancer and shows the third highest cancer-related mortality in the world (17). According to statistics, about 1,033,701 new GC cases occurred in 2018, with 782,685 resulting in death (18). The majority of GC cases are diagnosed in advanced stages, resulting in a relatively poor prognosis for survival (19). Therefore, it is extremely important to identify sensitive markers to improve the diagnosis and prognosis of GC.

To identify effective prognostic biomarkers for GC, we used bioinformatics to analyze two datasets (GSE79973 and GSE54129). Through a variety of methods and tools, we finally identified that eight genes (COL4A1, COL6A3, COL1A2, COL1A1, THBS2, COL11A1, SPP1, and FN1) were associated with poor prognosis of GC, all of which were enriched for the ECM-receptor interaction pathway.

SPP1 or secreted phosphoprotein 1, containing six introns and seven exons, is located on chromosome four. SPP1 participates in pathological processes such as tumorigenesis, invasion, and metastasis (20) and is highly expressed in many cancer tissues (21-23), with tumor progression promoted by SPP1 overexpression (24). In colorectal cancer (CRC) cells, up-regulated SPP1 expression accelerates proliferation and enhances invasion (25). However, when SPP1 expression is down-regulated, tumor growth is suppressed (26,27). SPP1 affects tumor cell metabolism via the PI3K/AKT signaling pathway. Silencing the SPP1 gene inhibits the AKT pathway, thereby preventing the growth of mouse ovarian cancer (28). Additionally, SPP1 is considered a prognostic biomarker for renal cancer (23). Another study demonstrated that the higher the levels of SPP1, the poorer the prognosis of GC (29). Significant research is being carried out on SPP1 and broadening its role in GC.

Many studies have demonstrated that members of the fibrillar collagen family play a key role in various cancers. Collagen type I consists of COL1A1 and COL1A2 (30), which is the most abundant collagen in the human body (31). Some studies have shown that COL1 is a tumor-related gene (32,33). COL1A1 and COL1A2 mRNAs are overexpressed in GC and other cancer tissues (34,35). COL1A1 participates in tumor proliferation, migration, and invasion (36). Furthermore, up-regulation of COL1A1 expression contributes to cisplatin resistance in ovarian cancer cells (37). Collagen type IV is most abundant in basement membranes (BMs) (38). COL4A1 is up-regulated in bladder cancer cells, promoting tumor invasion (38). Overexpression of COL4A1 contributes to proliferation in breast cancer cells (39). COL4A1 has also been considered to be a biomarker for the prognosis of intrahepatic cholangiocarcinoma (40). Both COL1A1 (37) and COL4A1 (41) were shown to be associated with chemotherapy resistance. COL6A3, expressed in stromal cancer-associated fibroblasts, is an independent prognostic factor in some cancers. Knockout of the COL6A3 gene in CRC cells decreases proliferation, invasion, and migration (42). COL11A was also confirmed play a role in proliferation, migration, and invasion of GC (43).

Thrombospondin 2 (THBS2) is a member of the Ca2+-binding glycoprotein family, and plays a critical role in some cancers (44,45). Many studies have indicated that THBS2 is related to tumor prognosis. Sun et al. (46) found that higher THBS2 levels in GC were correlated with better prognosis; however, patients with lower THBS2 mRNA expression show a higher histological grade of malignancy. Another study on colon cancer yielded similar results; higher expression of THBS2 led to a significantly lower metastasis rate (47). THBS2 may be exert its effects by inhibiting the process of tumor angiogenesis (48).

COL4A1, COL6A3, COL1A2, COL1A1, THBS2, COL11A1, SPP1 and FN1 were identified from two datasets, which associated with the poor prognosis of GC. Bioinformatic analysis revealed that these genes are effective and reliable molecular biomarkers for the diagnosis and prognosis of GC, providing a new and potential therapeutic target for GC. The limitations in our study should be mentioned, the crucial roles of these hub genes in GC were only based on public databases theoretical predication. Further research is required to substantiate the findings of the present study.

We would like to thank everyone who take part in this study.

Reporting Checklist: The authors have completed the MDAR checklist. Available at http://dx.doi.org/10.21037/tcr-20-926

Conflicts of Interest: All authors have completed the ICMJE uniform disclosure form (available at http://dx.doi.org/10.21037/tcr-20-926). The authors have no conflicts of interest to declare.