Radiotherapy has been one of the most important methods of tumor treatment since the development of radiation equipment and physics. As general radiotherapy methods, the 3D-CRT, IMRT and VMAT technologies need highly accurate patient setups. The posture fixation of patients during treatment becomes a significant procedure, which has a direct impact on the positioning accuracy. Schmidhalter’s (1) study found that high setup accuracy provided target margin reduction, which provides better protection for normal tissue and results in an improvement in patient care.

Over the past few decades, image guidance radiotherapy (IGRT) has integrated imaging systems with linear accelerators and achieved high patient positioning accuracy. IGRT technology can help us to observe three-dimensional (3D) anatomy and soft-tissue contrast information (2), which enables us to correct setup errors.

In an early IGRT system, a four-degree-of-freedom (4-DoF) couch was employed, which could only correct the setup errors concerning the three translational axes—longitudinal (long), lateral (lat) and vertical (vert)—and the couch rotation angle (rot) (3). In recent years, a new IGRT system combining the six-degree-of-freedom (6-DoF) couch has been introduced into the clinic to further improve patient setup accuracy (3-8). Compared with the 4-DoF couch, the 6-DoF couch has two additional degrees of freedom, including rotational axes pitch and roll (3). Theoretically, the 6-DoF couch united with kilovoltage cone beam computed tomography (kV-CBCT) can further reduce setup errors. This may lead to a potential situation that decreases the clinical target volume (CTV) to planning target volume (PTV) margins (9,10).

In recent years, some studies have reported that the 6-DoF couch based on CBCT can significantly reduce errors in stereotactic radiosurgery (SRS) and stereotactic body radiotherapy (SBRT) (5,6,11,12). Patient setup errors may have a serious dosimetric influence on the tumor target (13). However, few studies have studied the positioning errors in the pelvis and the correlation between the six degrees of freedom shifts. Chiesa et al. reported that there was no correlation between translational and rotational errors in prostate treatment (2). However, pelvic tumors are unstable as a result of translational and rotational motion. In addition, there are many other deficiencies in positioning sourced from the patient’s weight, abdominal respiration, postprandial time, bladder filling degree, and subcutaneous fat thickness. Thus, many positioning errors and poor repeatability often occur in pelvic tumor radiotherapy. Therefore, it is important to ensure position errors for tumor radiotherapy within acceptable limits.

Thus, the accurate evaluation of the 6-DoF couch appears to be particularly important for patient radiotherapy positioning. In this study, we designed an experiment utilizing an anthropomorphic phantom to verify the accuracy of the patient positioning error for a 6-DoF couch based on CBCT. In addition, we analyzed the error data to search for the correlation between six-dimensional setup errors in pelvic tumor patients. This study may be helpful to improve the positioning accuracy and reduce the margin of CTV to PTV in current clinical practice.

All experiments and treatments were performed at the Varian VitalBeam Linear Accelerator (Varian Medical Systems, Inc., Palo Alto, CA), which is equipped with a kilovoltage CBCT image-guidance system and a 6-DoF couch. The 6-DoF couch combines yaw, pitch and roll rotational motions with translational motions and achieves submillimeter and subdegree precision in high-precision radiotherapy patient positioning.

The setup experiment of anthropomorphic phantoms

An anthropomorphic phantom [Alderson Rando phantom (14,15), Alderson Research Laboratories, Inc.] was used to obtain the setup errors in this experiment, which have shapes and anatomical characteristics that are similar to real patients with pelvic tumors who were treated with IMRT. The Alderson Rando phantom supine and prone positions are shown in Figure 1. The phantom was initially set up on the CT couch by comparing the cross mark between the room laser lamp and phantom.

Figure 1 The anthropomorphic phantom: (A) supine position; (B) prone position.

A pelvic CT scan of the anthropomorphic phantom was obtained by using a Philips scanner (Holland, CT Lightspeed 16) with an imaging protocol of 120 kV tube voltage, 300 mA cube current, 3 mm thickness and an in-plane resolution of 0.97×0.97 at the head, supine and prostrate positions. The structures and treat­ment plan were created on the CT-scan images by using the Eclipse Treatment Planning System (Version 13.6, Varian Medical Systems, Palo Alto, CA) in the supine and prone positions, respectively. After simulation of the CTV, the PTV was obtained by expanding the CTV according to the Radiation Therapy Oncology Group (RTOG) 4018 reports as follows: adding 5 mm in the mediolateral (ML) and posterior (P) directions and 8 mm in the superio-inferior (SI) and anterior (A) directions (9). Immediately, IMRT treatment plans were designed and scheduled. Then, the plans were transferred onto the Vitalbeam Linear Accelerator.

We introduced different levels of known position errors to simulate the patient positioning procedure. The phantom was intentionally shifted 2 and 3 cm in lateral and longitudinal directions, while the angular shifts of 2° and 3° were introduced in pitch and yaw directions. We defined the setup errors as six categories by the combination of directions as shown in Table 1, which hasn’t any physical meaning and was used only for representation purposes. Then, CBCTs were performed and registered with the planning CT image to verify the shifts when the anthropomorphic phantom was placed on the linear accelerator table. The phantom was intentionally shifted in particular directions but remained constant in other directions. All of the above steps were repeated in supine and prone positions. 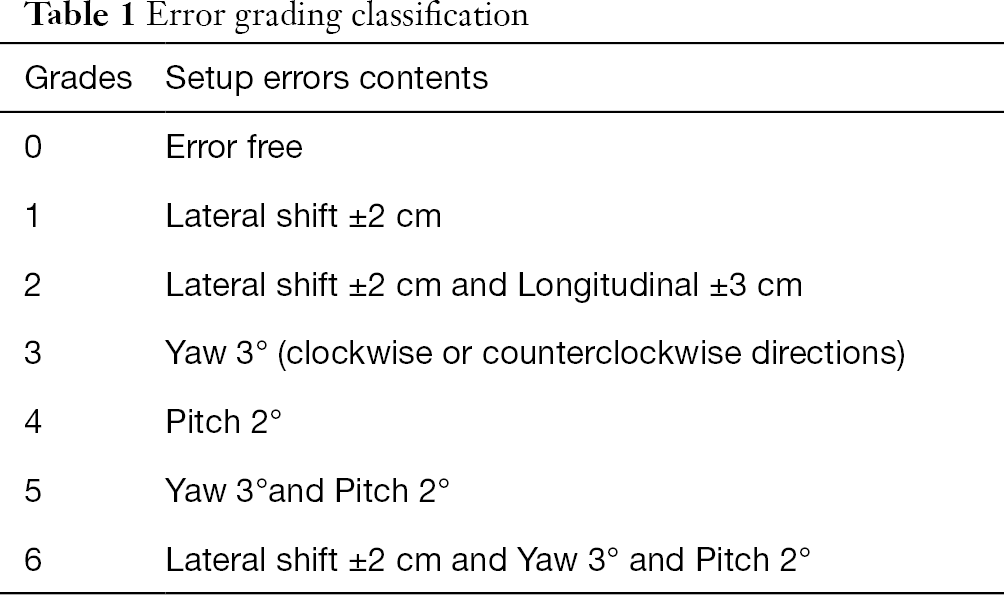 The retrospective analysis of patients

After the phantom experiment, we retrospectively analyzed the positioning errors of patients in the supine and prone positions. Two hundred verifications of 14 pelvic tumor patients who received radiotherapy on a Vitalbeam Linear Accelerator were randomly selected. All six couch axes were analyzed in this study. All the patients in our work were corrected by the 6-DoF couch with CBCT before the treatment delivery, in which the planning CT image was matched with the CBCT image acquired immediately using the default algorithm based on bone matching. The study was conducted in accordance with the Declaration of Helsinki (as revised in 2013). The ethics committee of Shandong Cancer Hospital and Institute approved this study (No.: 2019-371). Because this is not a treatment-based study, our institutional review board waived the need for written informed consent from the participants.

The mean and the standard deviation of the shifts between the CBCT and the planning CT in translational and rotational directions were calculated, where the mean describes the systematic error and the standard deviation describes the random error. On the other hand, the Pearson correlation between two pairs of the patients’ positioning error data in 6 directions (left-right direction: X, inferior-superior direction: Y, anterior-posterior direction: Z, left-right rotation: roll, anterior-posterior rotation: pitch, counterclockwise or clockwise rotation: yaw) was performed to verify the findings of the phantom experiment.

SPSS software, version 22.0 (SPSS, Chicago, IL, USA) was used to conduct statistical analysis. The data were consistent with the normal distribution, and statistical analysis was performed using the paired t-test or Wilcoxon rank sum test. It was considered statistically significant when the two-tailed P value was <0.05. 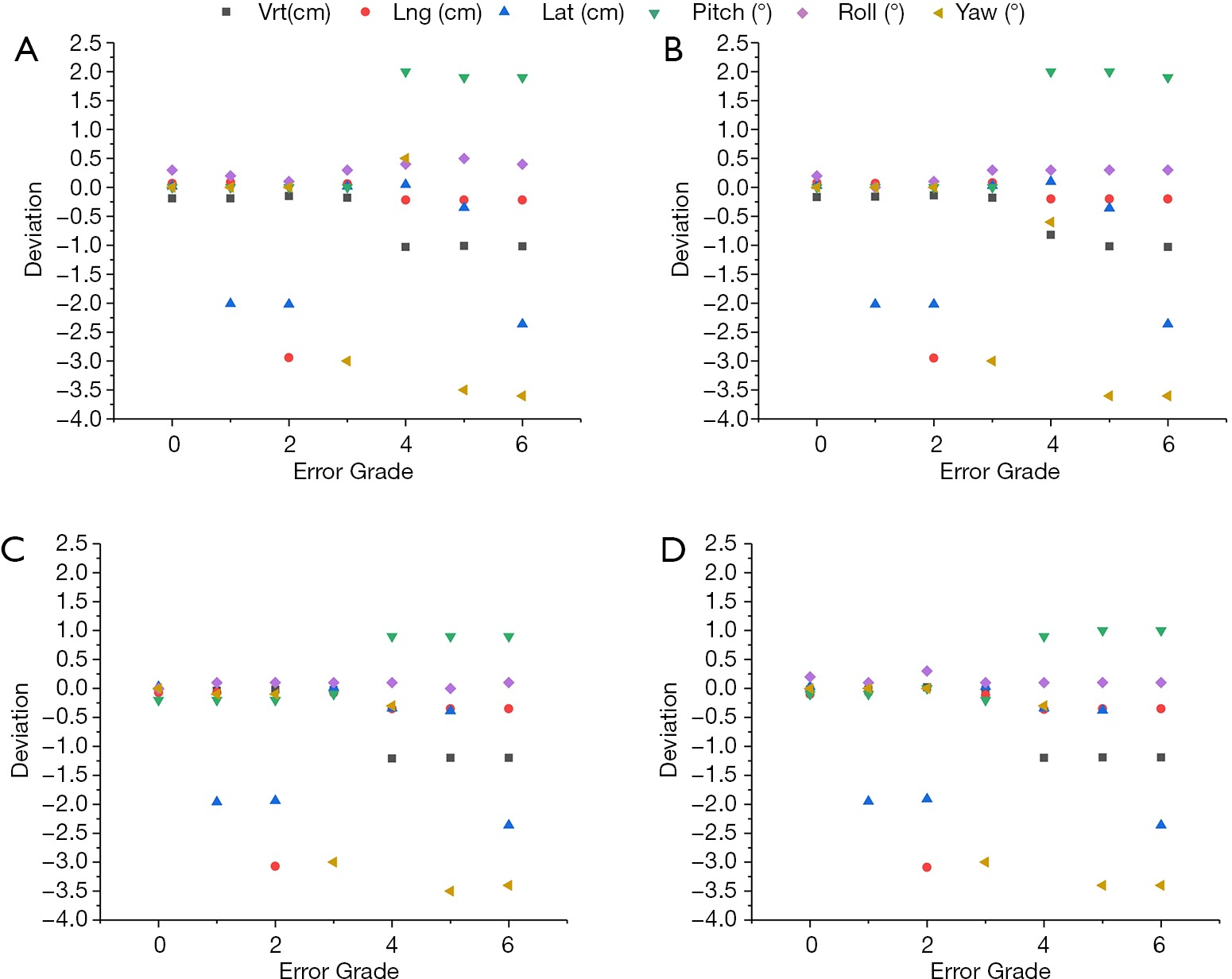 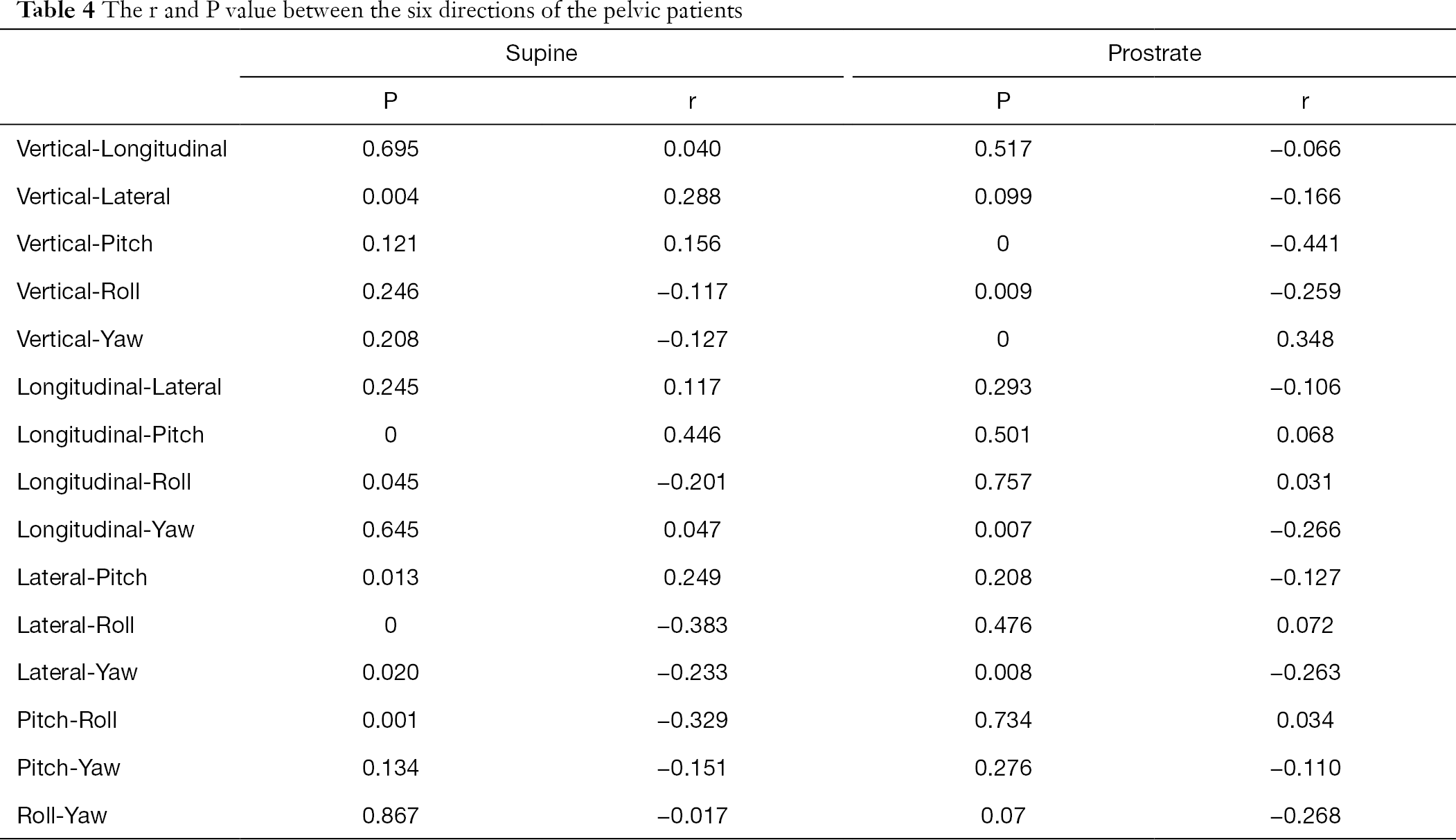 In this work, the known errors introduced in the phantom experiment were detected after registration between CBCT and planning CT. After setup error correction, the 6-DoF couch based on CBCT exhibited high accuracy. We also find that the average error shift caused by the different registration methods is less than 0.04 cm in the translation direction and 0.1° in the rotational direction when phantom positions were kept unchanged. This result indicated that the registration method is a factor of random error for pelvic patients, which requires that the same registration method be selected when CBCT registration is performed in clinical practice. Schmidhalter et al. also reported that the use of matching methods is one of the error sources (1). On the other hand, the average deviation caused by different positions does not exceed 0.19 cm in the translation direction, and the rotation direction is less than 0.54° under the same registration method. Different postures may lead to different degrees of error in all directions. It is impossible to determine which posture error is smaller than the others. To some extent, posture fixation may be determined according to the patient’s situation.

To confirm the phenomena observed in the phantom experiment, we retrospectively analyzed the data of 200 groups with different postures in 14 cases. The average value and standard deviations were calculated both in the supine and prone positions. Additionally, a correlation analysis between six directions was performed. The average value and standard deviations of supine patients in translation (vertical, longitudinal, and lateral) and rotation (pitch, roll and yaw) directions were 0.14±0.35, −0.12±0.4, −0.07±0.22 cm, 0.79°±1.6°, 0.41°±0.71°, and −0.03°±0.8°, respectively. For the prone position, the average ± SD of the vertical, longitudinal, and lateral directions were 0.19±0.48, −0.05±0.34, and −0.16±0.27 cm, respectively. The mean (± SD) of pitch, roll and yaw was 1.1°±1.49°, 0.65°±1°, and −0.23°±0.75°, respectively. This result indicated that the errors in the prone position (except longitudinal) are larger than those in the supine position. One possible reason is that the fixed supine position is more likely to lead to random error in the longitudinal axes (2).

According to Stroom et al. (16) and van Herk et al.’s (17) research on patient positioning error, the average of all the positioning errors indicates the systematic error (Σ), and the random error is represented by the standard deviation of all the positioning errors (σ). Although some margin formulas were proposed (18), the margins of PTV are often calculated as follows: Mptv=2.5+0.7σ. Then, the Mptv values of the x-, y-, and z-axes are calculated. However, we find that there is a certain relationship between the 6-DoF errors of the six-dimensional couch, and the error of the rotation direction during the positioning process may cause the change of the target position even within the tolerance range. Therefore, when calculating the PTV margins, one must consider not only the respective errors in each direction but also the influence of different directions. This assumption should be confirmed in future studies.

Funding: This research was partly supported by the National Nature Science Foundation of China (Grant No. 81901743), the WBE Liver Fibrosis Foundation, China (Grant No. CFHPC2019027) and the Key Research and Development Program of Shandong Province (Grant No. 2019GSF108134).

Conflicts of Interest: All authors have completed the ICMJE uniform disclosure form (available at http://dx.doi.org/10.21037/tcr-20-1528). The authors have no conflicts of interest to declare.

Ethical Statement: The authors are accountable for all aspects of the work in ensuring that questions related to the accuracy or integrity of any part of the work are appropriately investigated and resolved. The study was conducted in accordance with the Declaration of Helsinki (as revised in 2013). The ethics committee of Shandong Cancer Hospital and Institute approved this study (No.: 2019-371). Because this is not a treatment-based study, our institutional review board waived the need for written informed consent from the participants. However, the patient information was kept anonymous to protect their confidentiality.