Lung cancer is still the leading cause of cancer-related death in the world. Besides, the prevalence of lung cancer is increasingly high. It can be classified as non-small cell lung cancer (NSCLC) and small cell lung cancer (SCLC), which accounts for 80–85% and 20% (1). Among NSCLC, adenocarcinoma (AD) is the majority type. Mucinous adenocarcinoma (MAD) is one of the rare subtypes in AD which accounts for only 5-6% (2). MAD is diagnosed according to the pathological and morphological features with abundant intracytoplasmic mucin and columnar or goblet cancer cells (3). Travis et al. had also reported that MAD tended to develop as multicentric or multilobar pathologically (4). Because of its rare prevalence, the clinical and biological features have not been fully studied (2,5). It had been reported that the MAD was associated with low incidence of EGFR mutation and high KRAS mutation rate, which would be primarily resistant to EGFR tyrosine kinase inhibitors (EGFR-Tkis) (6-8). Furthermore, its prognosis had not been fully studied. Some previous studies showed that MAD had an adverse prognosis (9-12). Nevertheless, other studies reported an ideal clinical outcome of MAD comparing to non-MAD patients (13).

A new classification system of lung AD has been published in 2011 by the International Association for the Study of Lung Cancer (IASLC), American Thoracic Society (ATS) and European Respiratory Society (ERS). Besides MAD, the non-MADs were categorized to five different subtypes according to their pathological characteristics including acinar, lepidic, papillary, micro-papillary and solid predominant types (2). Since the classification system was proposed, a large amount of studies had been showed the relation between pathological subtypes and their prognosis. Patients with lepidic predominant had the best prognosis, while acinar and papillary had worse prognosis than lepidic. Patients with micropapillary and solid predominant had the worst prognosis for a relatively high recurrent rate. Besides, numerous studies of treatment strategies in each subtype had also been performed and reported. Surgery was the first choice in the early stage of each predominant pattern patients, while adjuvant chemotherapy (AC) was highly recommended in micropapillary and solid predominant (14,15). Compared to non-MAD, few studies had been reported the prognosis and treatment strategy of MAD especially the early stage of MAD. The necessity of AC had not been verified on the early stage MAD patients. Additionally, there is still no consensus on the standard surgical approach for the patients with less than 1 cm tumors.

As a result, we intend to demonstrate the clinical characteristics of MAD and identify different prognostic factors based on Surveillance, Epidemiology, and End Result (SEER) database. The effect of AC and different surgical approaches on the early stage MAD patients would be analyzed. We present the following article in accordance with the STROBE reporting checklist (available at http://dx.doi.org/10.21037/tcr-20-194).

The patients diagnosed as stage I AD in the primary site of main bronchus and lung (SEER primary site code = C340 – C349) were identified. The clinical characteristics and outcomes were extracted and analyzed. Cases with missing data, unknown stages or no surgery were excluded after discussion. A total of 4,789 patients were pathologically diagnosed as MAD including signet-ring cell carcinoma (SRCC), solid AD with mucin production (SA), primary mucinous bronchioloalveolar carcinoma (MBAC) and mucinous colloid adenocarcinoma (MCA). The study is consulted by the ethics board of Jiangsu Province Hospital. Considering the study would be conducted using public electronic database. The consent of the patients is not required. The request of accessing SEER database is also approved by the SEER program in National Cancer Institute. The selection process of primary cohort was demonstrated in Figure 1. 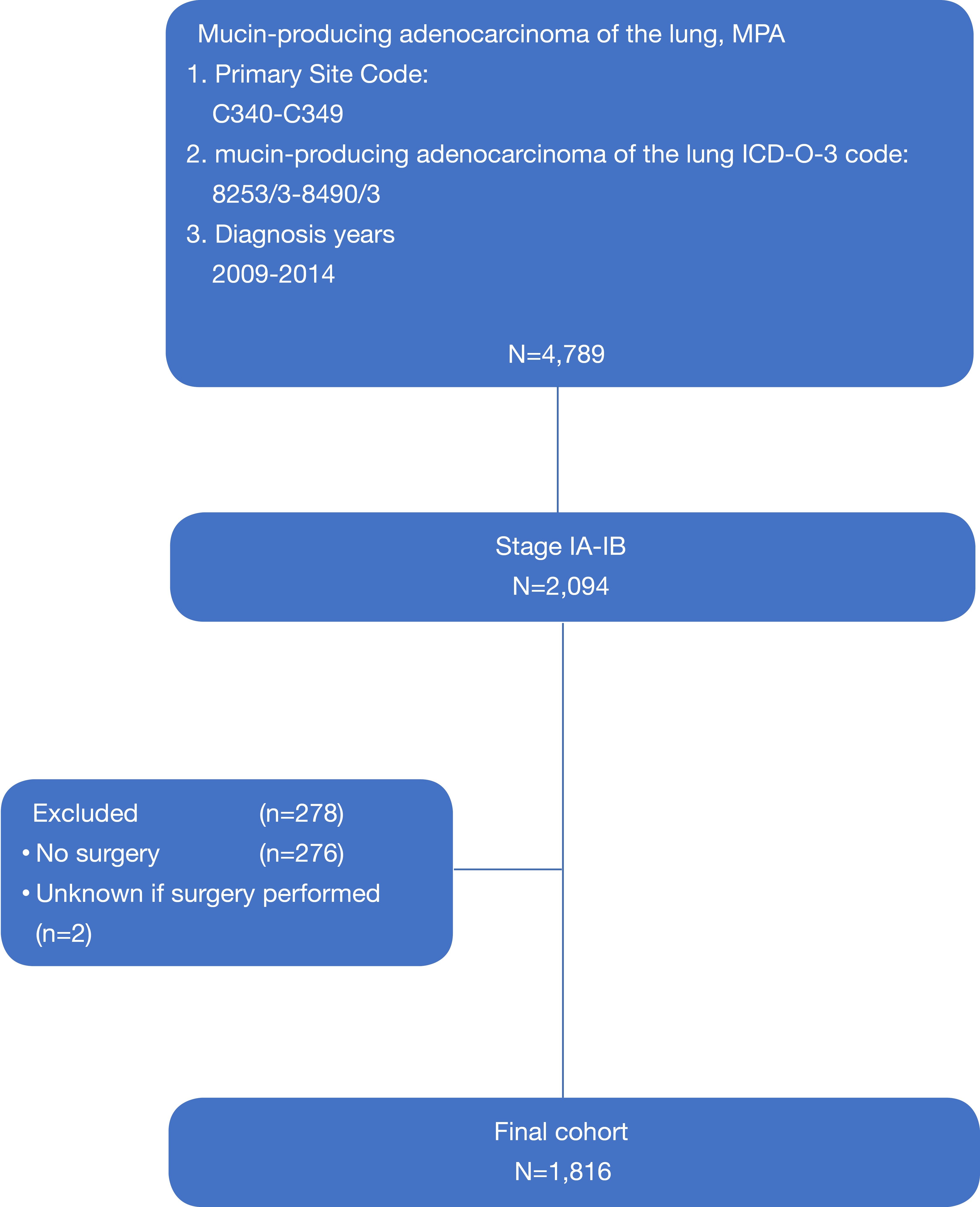 The primary outcome was overall survival (OS). The Kaplan-Meier method and log-rank test were used to demonstrate survival status of the cohort and assess the prognostic differences between various treatments. Univariate and multivariate analysis was performed incorporating gender, age, surgery, stage, AC and histological subtypes.

The Kaplan-Meier, Cox regression and propensity score matching analysis (PSM) were performed using the R (version 3.5.0). Hazard ratio (HR) and the 95% confident interval (95% CI) were reported. The statistical difference was considered as significant when P<0.05. All tests were two-sided.

A total of 1,368 patients (75.3%) was stage IA and 448 patients was IB. In the subgroups, IB patients were 56 (46.3%) in AC group and 392 (23.1%) in S group. The mean tumor size was 21.8 mm in all patients. Patients in AC group had larger tumor size than S group (26.3 vs. 21.5 mm, P<0.001). In terms of pathological subtypes, MAD and mucin-producing AD were the predominant in both groups. All patients received radical surgical treatments while 78 patients in AC groups also received postoperative radio-therapy. The clinical characteristics and oncological features were demonstrated in Table 1. 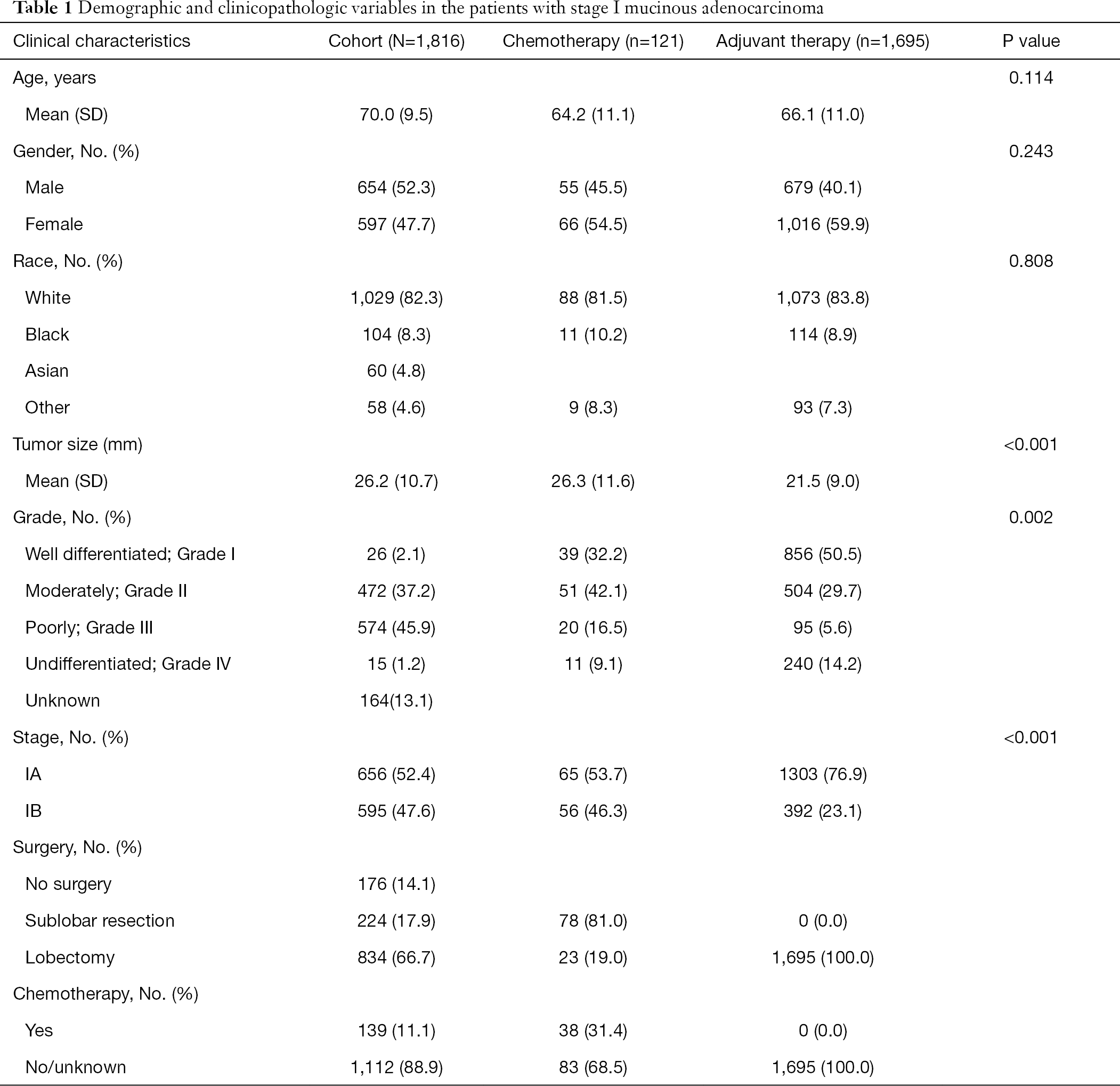 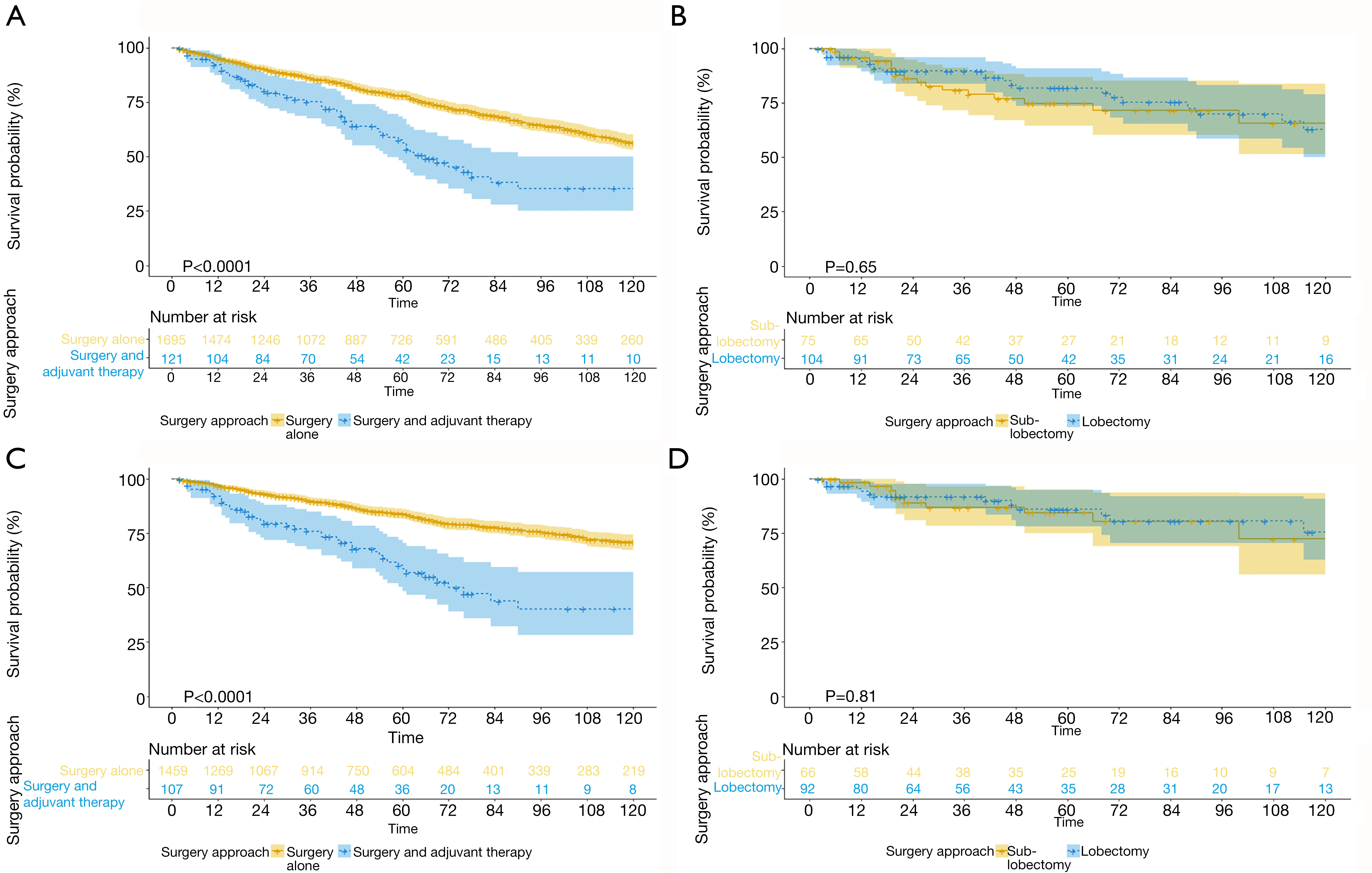 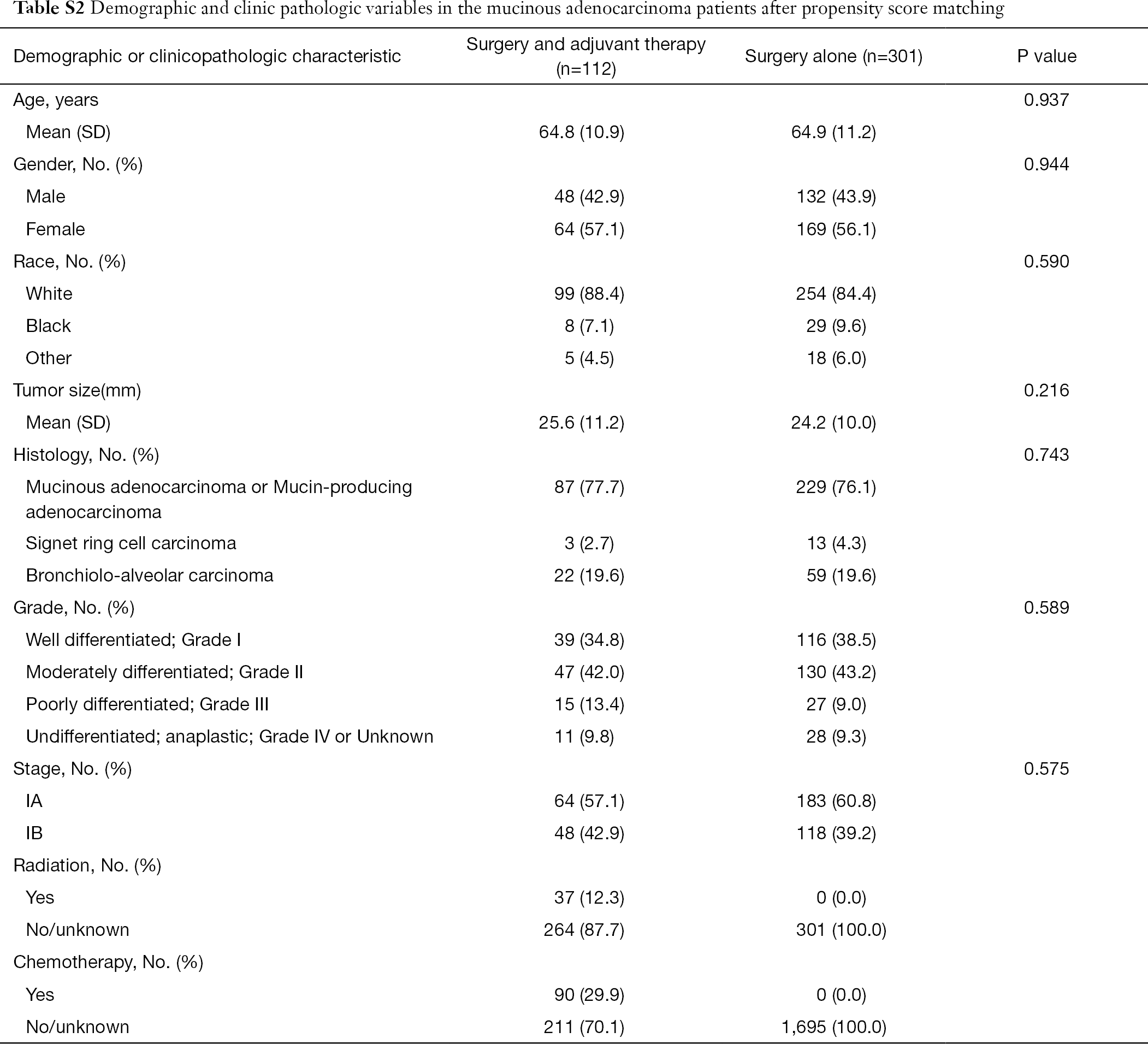 Figure S1 The characteristics of data before and after propensity score matching (Jitter). 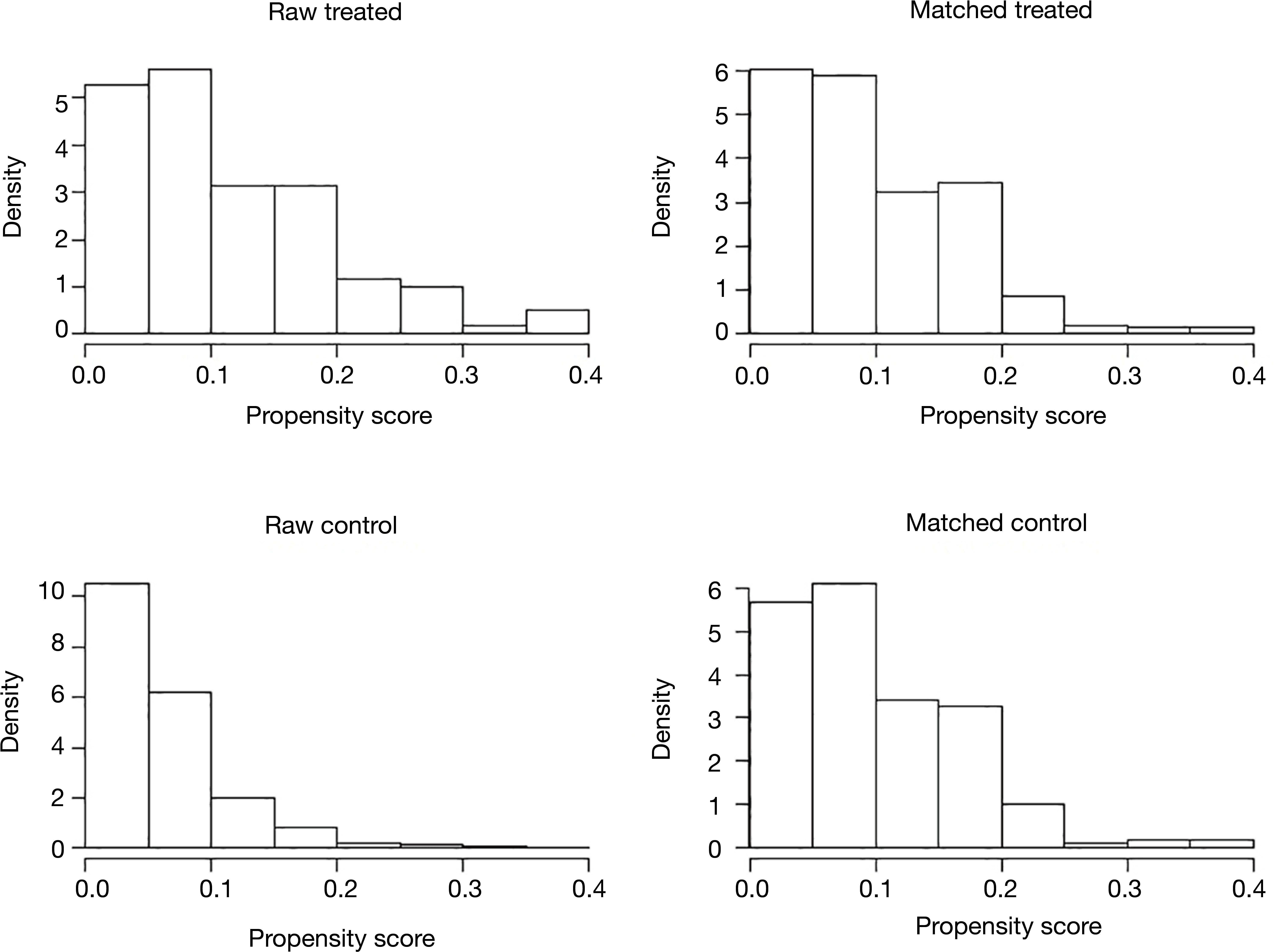 Figure S2 The characteristics of data before and after propensity score matching (Hist). 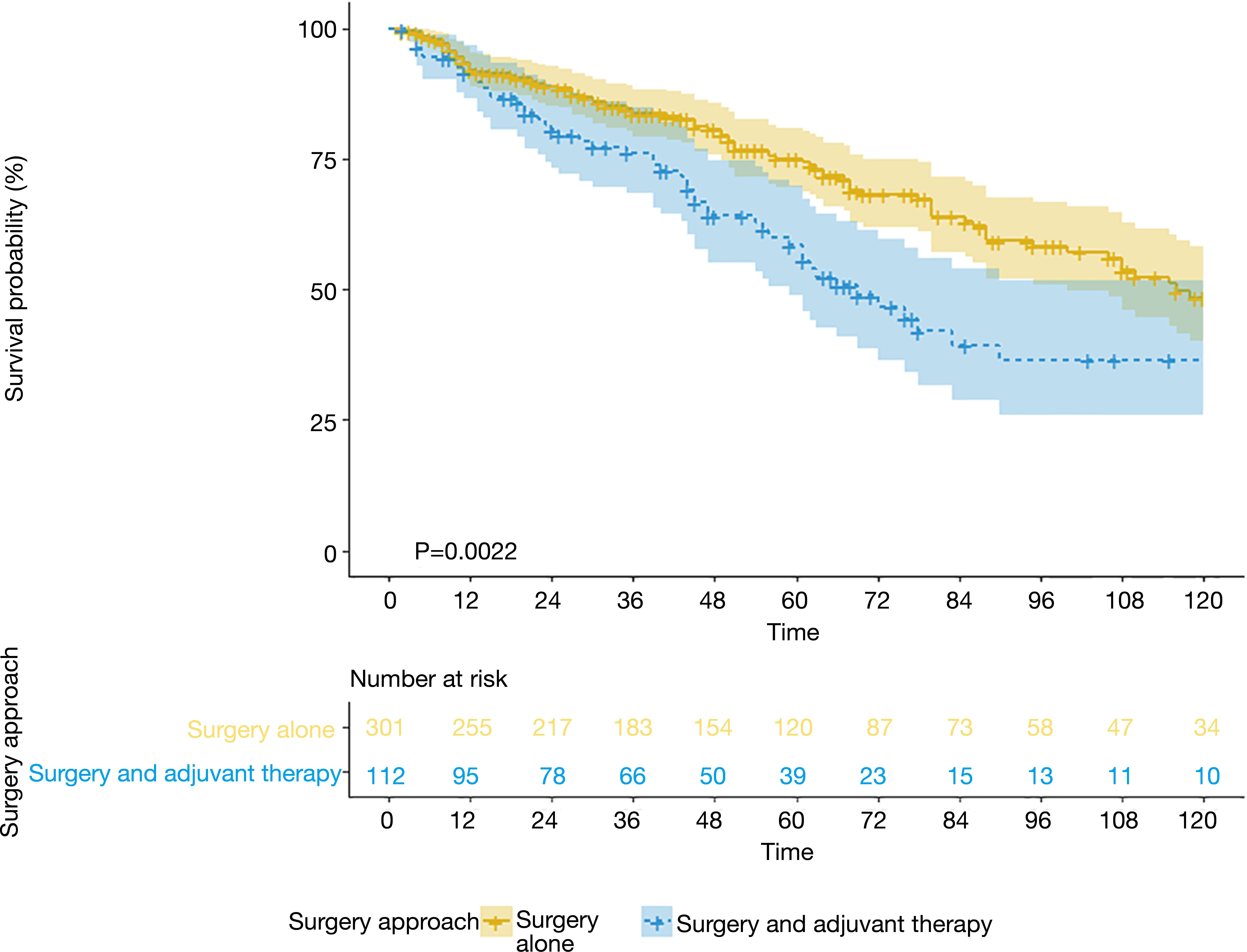 Figure S3 The overall survival of patients received surgery with or without adjuvant chemotherapy after propensity score matching.

Pulmonary MAD is a special pathological subtype of AD. Previous reports showed a relatively malignant feature and unideal prognosis of MAD comparing to other types of AD (2,9,10,11). Few studies reported the treatments and prognosis of early stage of MAD. To fill the gap of knowledge in treatment for early stage of MAD, we therefore conducted this study. Regarding to its low incidence, we chose patients from SEER database which was sponsored by National Cancer Institute and covered approximately 28% of US population. In our study, we analyzed the effect of adjuvant chemotherapy in stage I MAD patients and survival outcomes of different surgical approaches.

Previous studies showed adjuvant chemotherapy provided little benefits to early stage of NSCLC (13-16). Principally, patients in stage IA were not recommended to receive adjuvant chemotherapy, while its effect and necessity in stage IB was unclear (16). Based on the molecular features of high KRAS mutation rate, MAD was considered as one of the malignancies of poor prognosis with lower OS and higher rate of tumor recurrence (17,18). In this study, it showed that adjuvant chemotherapy even provided worse prognostic outcomes. The heterogeneity of clinical features in two groups may account for the results. The mean tumor sizes in AC group was significantly larger than S group, which had been proved to be a negative prognostic factor. Besides, AC group included more patients in worse differentiated grades and IB stage. These characteristic differences mostly accounted for the worse prognosis. It indicated that most of the clinical doctors would not prescribe adjuvant chemotherapy for the stage I MAD patients. Nevertheless, they might tend to administer adjuvant chemotherapies to these patients with potentially worse outcomes. In order to exclude the effects from the characteristics, the PSM analysis was also performed. It also showed similar results as the primary cohort.

In terms of MAD patients with tumor size ≤1 cm, the result indicated that lobectomy group had similar survival outcomes to sublobar resection group. Although Dai et al. had reported lobectomy would have ideal prognosis than sublobar resection in a large scale of early stage of NSCLC (19), MAD patients were the exceptions. On the other hand, some patients with poor cardiopulmonary condition or other comorbidities were tend to receive compromised sublobar resection, which could spare as much lung tissue as possible (20-23). Therefore, no significant difference would be observed in OS. In order to investigate the prognosis associated with cancer despite other conditions, we therefore studied the cancer-specific survival. It showed no difference between two surgical methods. It might attribute to the ideal prognosis of early stage MAD. The median survival of both subgroups exceeded 120 months, which were consistent with the previous studies.

Limitations have to be admitted in this study. Firstly, MAD is a rare pathological subtype of NSCLC. The final cohort contains 1,816 MAD patients which is a relatively small sample size. Among them, only 121 patients are included in AC group. Given the fact that it is a retrospective study, clinical characteristics of each groups are difficult to unify. It might bring bias to the final results. Secondly, PSM was used in the study to minimize the different characteristics. However, some cases would be deleted in the process and make the final result over-optimized. Last, although SEER database contains tremendous amount of data, the integrity could be improved. Some data of surgical procedure and tumor features is not available in cases during the selection process, which we therefore have to discard. Moreover, neither comorbidity data nor tumor recurrence was recorded in the database. As a result, progression-free survival could not be calculated in this study.

In summary, adjuvant chemotherapy is not helpful in the stage I MAD patients in our study. No significant difference is observed in the comparison of prognosis between lobectomy and sublobar resection in tumor size ≤1 cm MAD patients. A larger cohort with more complete data is warranted to further investigate the necessity of adjuvant chemotherapy in early stage MAD and the preferable surgical approach.

Reporting Checklist: The authors have completed the STROBE reporting checklist. Available at http://dx.doi.org/10.21037/tcr-20-194

Conflicts of Interest: All authors have completed the ICMJE uniform disclosure form (available at: http://dx.doi.org/10.21037/tcr-20-194). The authors have no conflicts of interest to declare.

Ethical Statement: The authors are accountable for all aspects of the work in ensuring that questions related to the accuracy or integrity of any part of the work are appropriately investigated and resolved. The study is consulted by the ethics board of Jiangsu Province Hospital. The consent of the patients is not required.