Clinicopathological characteristics and survival outcomes of younger patients with gastric cancer: a systematic review and meta-analysis

Gastric cancer is an aggressive malignancy and remains the third leading cause of cancer-related death worldwide (1,2). Although the overall incidence of gastric cancer showed a decline worldwide, younger cancer patients had increased obviously during the last decades (3). The growing incidence, as well as its aggressive biological behavior as reported (4,5), has renewed interest in the surgery-based management of younger gastric cancer patients with a focus on therapeutic strategies.

To date, the survival outcomes of younger patients were still controversial. Previous data reported that younger patients had worse survival rates than older (6-9), whereas several studies showed a similar prognosis (10-20). Some studies even expressed that younger patients were associated with improved survival outcomes (21-30). A significant reason for these inconsistent findings from published studies was the different age cutoffs on defining younger patients (6,7,29,30). A published meta-analysis has reported improved 5-year survival in the younger group. However, it was primarily limited to the small sample size and significant heterogeneity (31). Besides, there was currently no randomized clinical trial that targeted the issue.

As such, our study aimed to compare the clinicopathological characteristics, postoperative complications, as well as survival outcomes between younger and older patients with gastric cancer through systematic review and meta-analysis, thus providing evidence for the development of guiding strategies for younger gastric cancer patients. We present the following article in accordance with the PRISMA reporting checklist (available at http://dx.doi.org/10.21037/tcr-20-2024).

Clinical studies were systematically searched from PubMed, Web of Science, Embase, and The Cochrane Library. The following fields were used for the search: “gastric” or “stomach,” “cancer” or “carcinoma” or “neoplasm” or “tumor,” “young adult” or “younger” or “youth.” These searches were limited to clinical articles published up to December 2019.

Studies were excluded from the analysis as follow: (I) publications were position papers, editorials, case reports, comments, or review articles; (II) literature duplication based on an author or center; (III) research data was inappropriate or cannot be extracted; (IV) studies lacked control group for meta-analysis.

Two independent reviewers extracted predesigned data from the included studies. The extracted information was as follows: Basic characteristics of the study, including authors, country, patient inclusion criteria, sample size, design as well as quality assessment; Clinicopathological characteristics of patients, including gender, tumor location, differentiation, Lauren type, Borrmann classification, pTNM stage, and therapeutic regimens (involving chemotherapy, total/subtotal gastrectomy, curative resection, and lymphadenectomy); Survival outcomes, including metastasis, recurrence, and the short or long-term survival rates on different clinical tumor stage. The stage of gastric cancer was based on the American Joint Committee on Cancer (AJCC) tumor, node, metastasis (TNM) staging system. Lymphadenectomy was divided into D1 to D4, depending on the primary tumor location and removal of each lymph node station (32). Gastrectomy was defined as patients received surgery with or without D2 lymphadenectomy, while curative gastrectomy was defined as resection with D2 lymphadenectomy and a negative margin. The disagreement was resolved through discussion among the reviewers.

The quality of the included studies was evaluated using The Newcastle-Ottawa Quality Assessment Scale (NOS) (33). The NOS checklist consisted of three major categories (selection, comparability, and outcome) with a maximum of nine stars. Each included study achieving six or more number of stars was graded high quality. Any disagreement was discussed to reach a consensus.

We conducted the review and meta-analysis using Revman software, version 5.3 (Cochrane Collaboration, Oxford, United Kingdom). Categorical variables were analyzed by the odds ratio (OR), while the corresponding 95% confidence interval (CI) was recorded. The Z test was conducted to determine the OR, with P<0.05 considered statistical significance. Heterogeneity was investigated using the χ2 test and the I2 test. If significant heterogeneity existed, we employed the random effect model; otherwise, the fixed effects model was adopted (34,35). Sensitivity analyses were undertaken to investigate sources of substantial heterogeneity.

Our initial search strategy generated a total of 8,686 relevant clinical studies. After a screening of titles and abstracts, 108 articles were scrutinized by a full-text review. Eighty-three studies were eventually excluded by following the exclusion criteria and inclusion criteria. In total, the eligible 25 clinical studies (4,5,8-30) involving 81,188 gastric cancer patients were entered into the review and meta-analysis, of which one was a prospective study (17), three were multicenter studies (16,19,21), and the rest were all retrospective studies. Figure 1 showed the flow chart of the search process. The NOS scores and essential characteristics of the eligible studies were shown in Table 1. 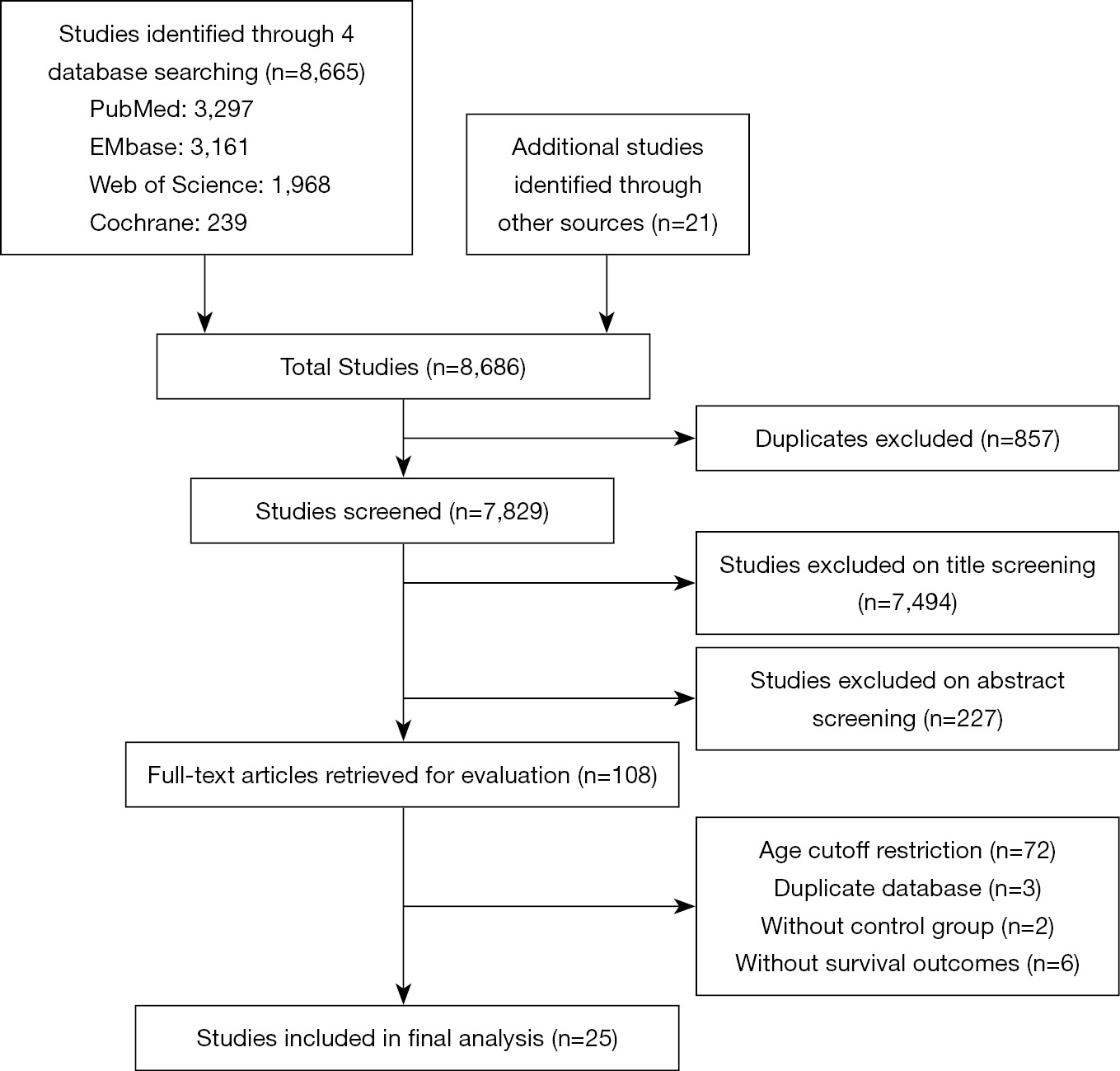 Figure 1 The flow chart of the research process until December 2019. 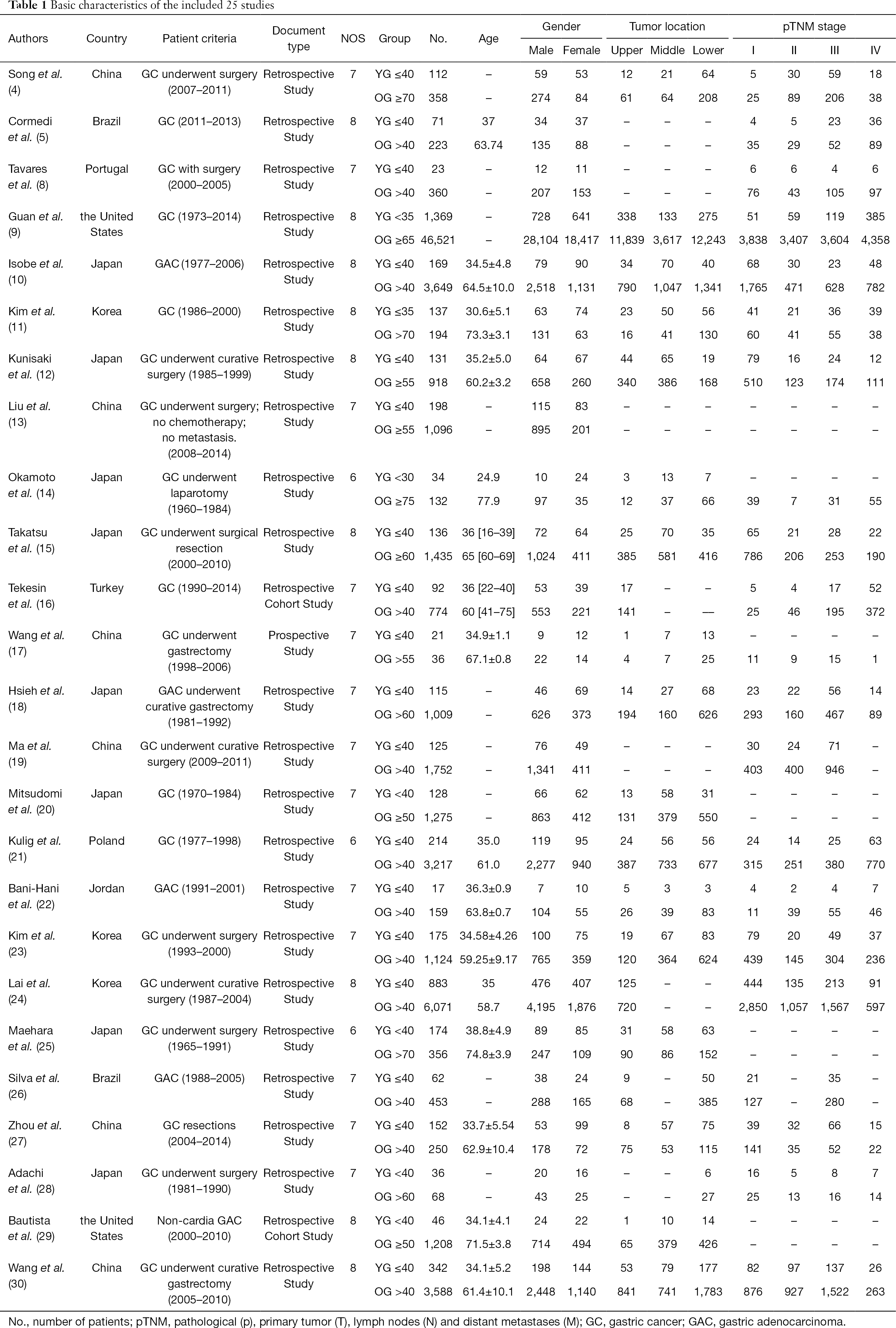 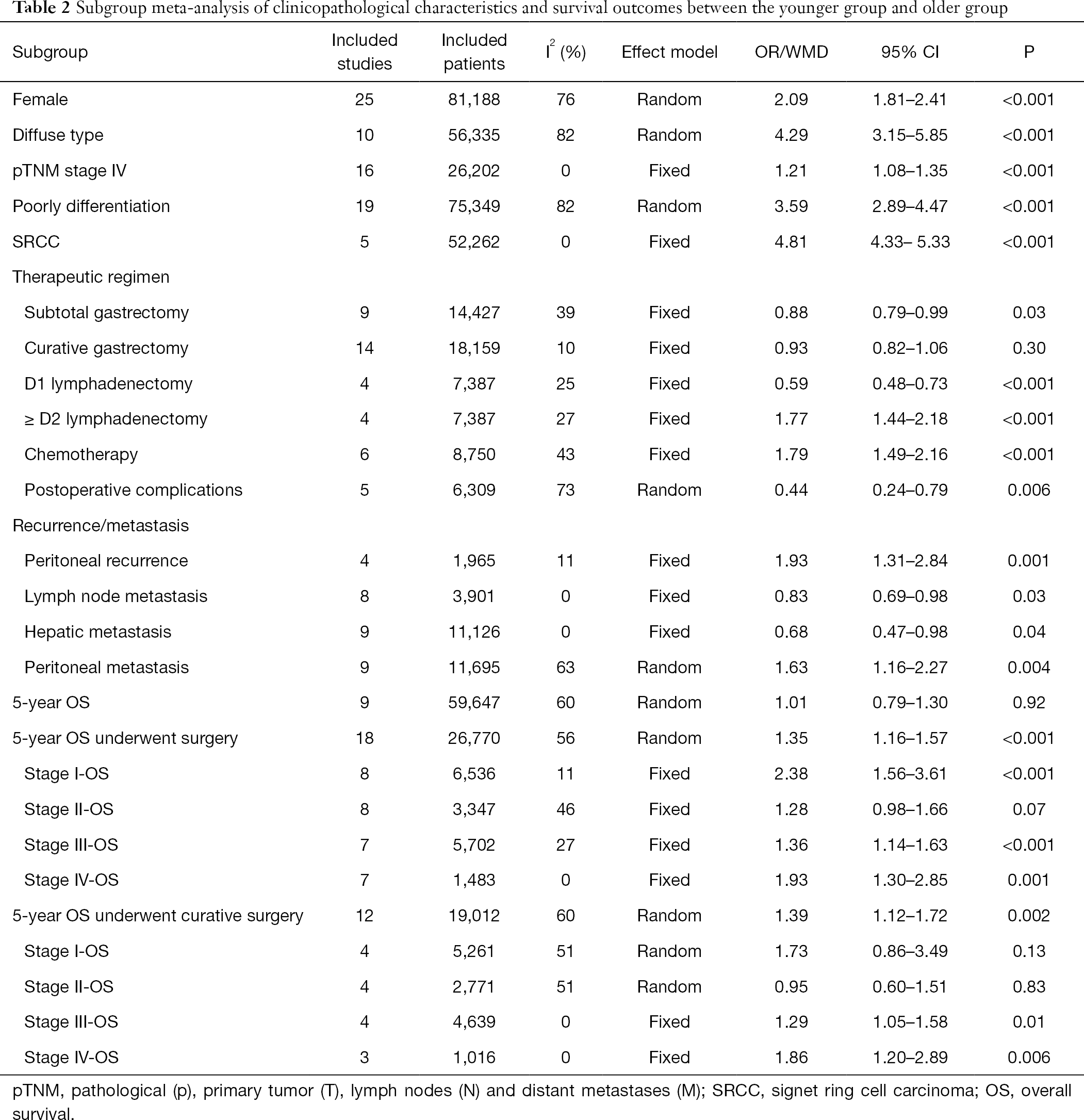 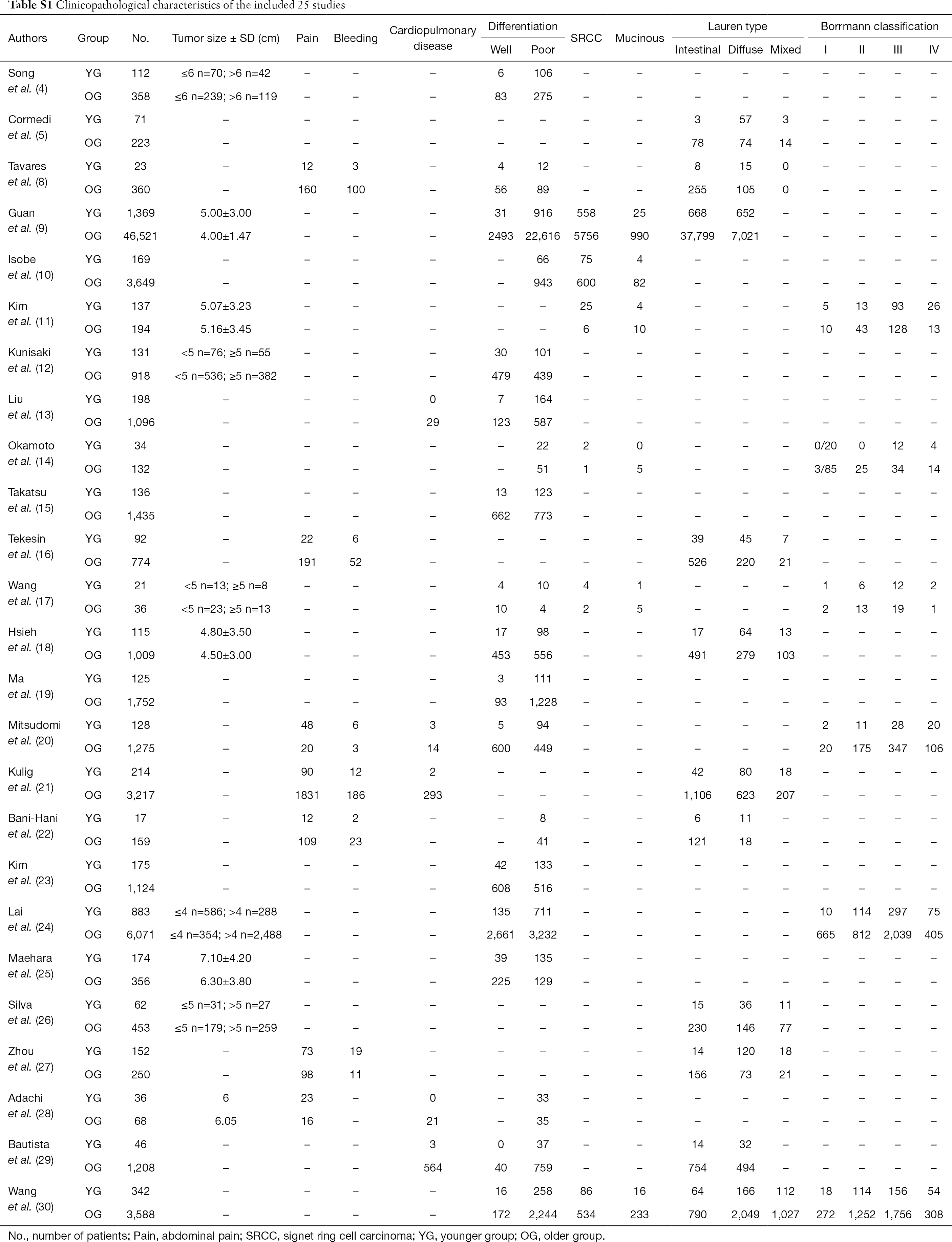 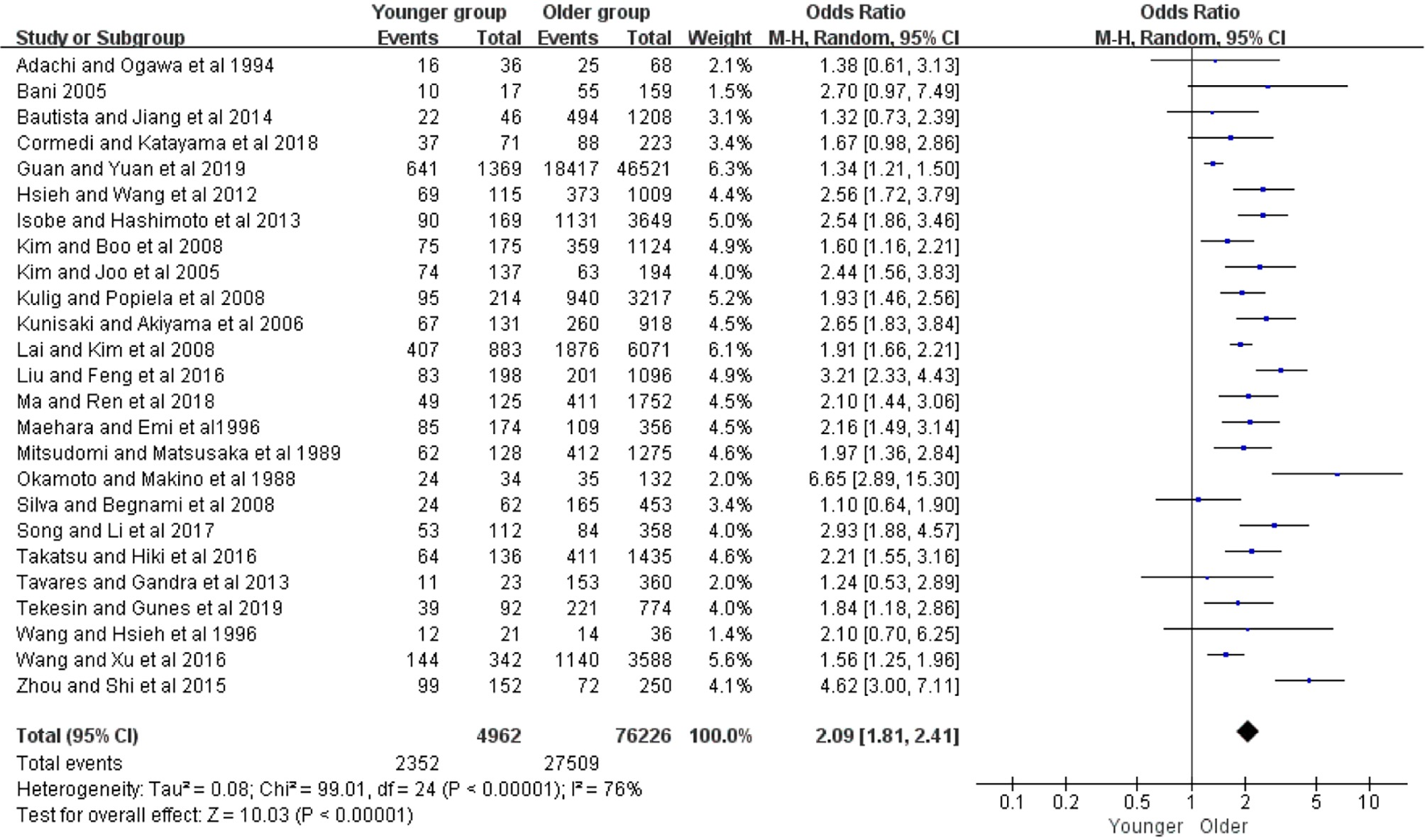 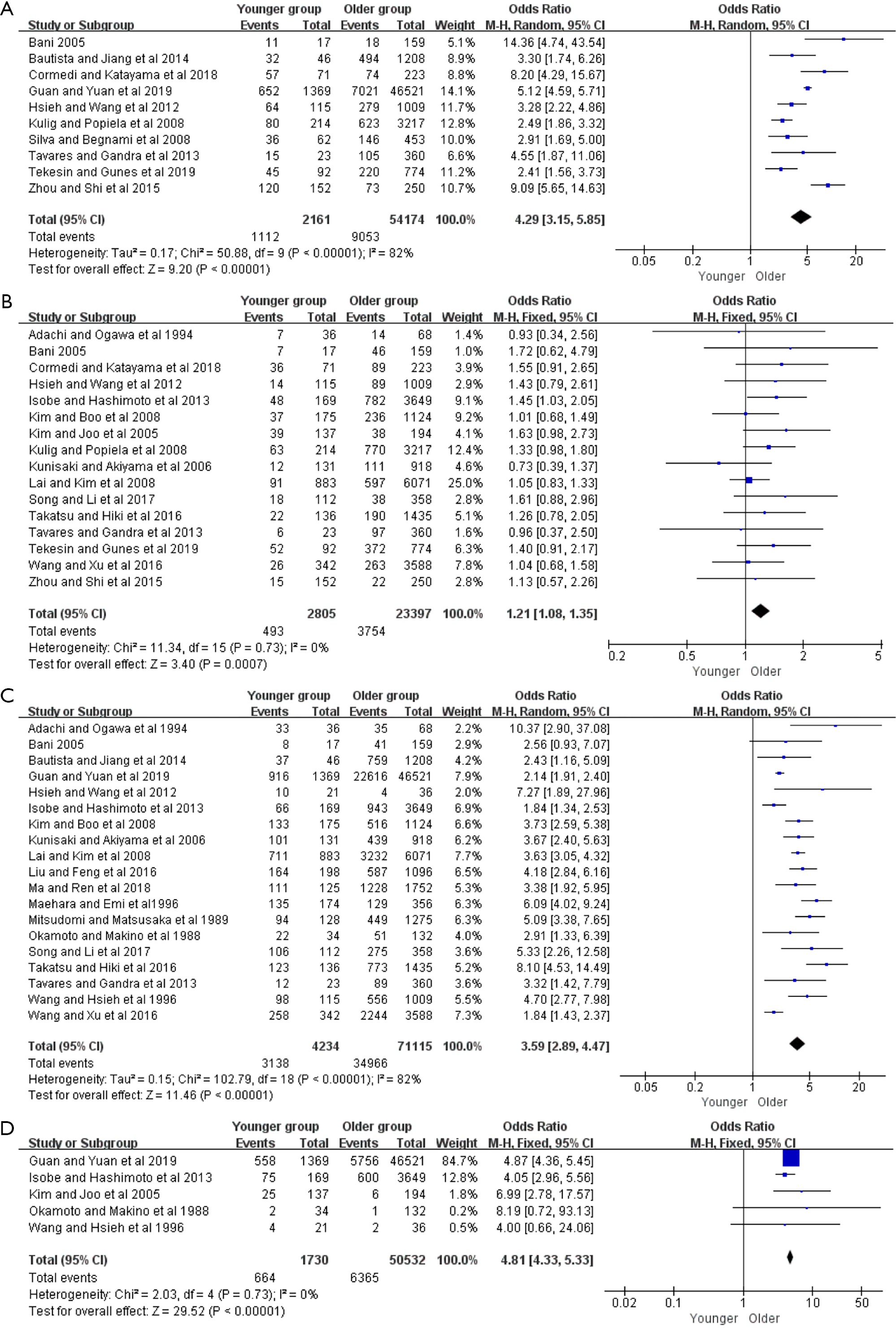 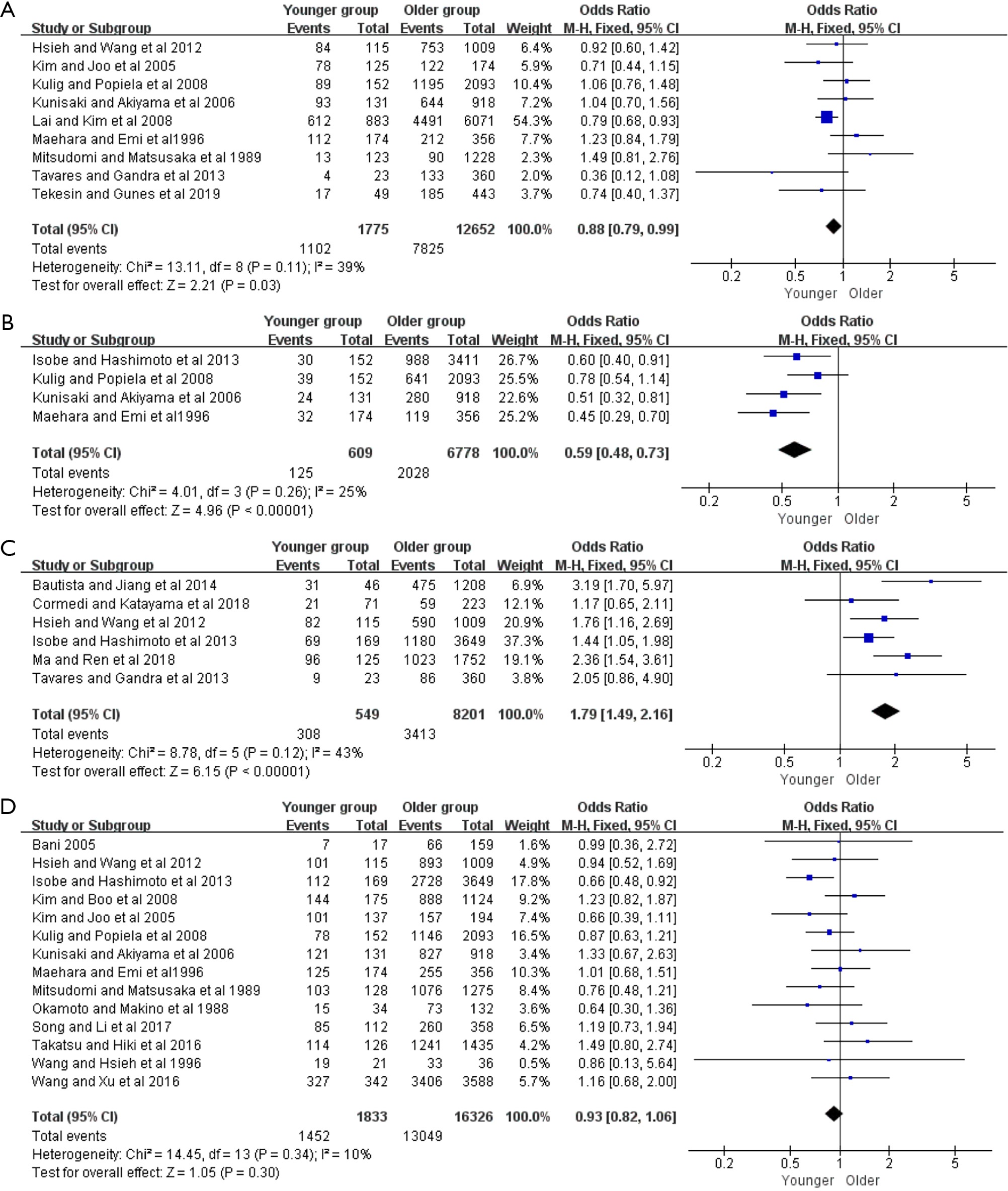 A total of 6,309 patients from five studies were enrolled in postoperative complications. The result revealed that the proportion of complications in younger patients was significantly lower compared to the older (OR =0.44, 95% CI: 0.24–0.79, P=0.006), and the heterogeneity between the younger and older group was significant (I2=73%) (Figure S4).

Figure S4 Meta-analysis of the proportion of postoperative complications between younger and older group. 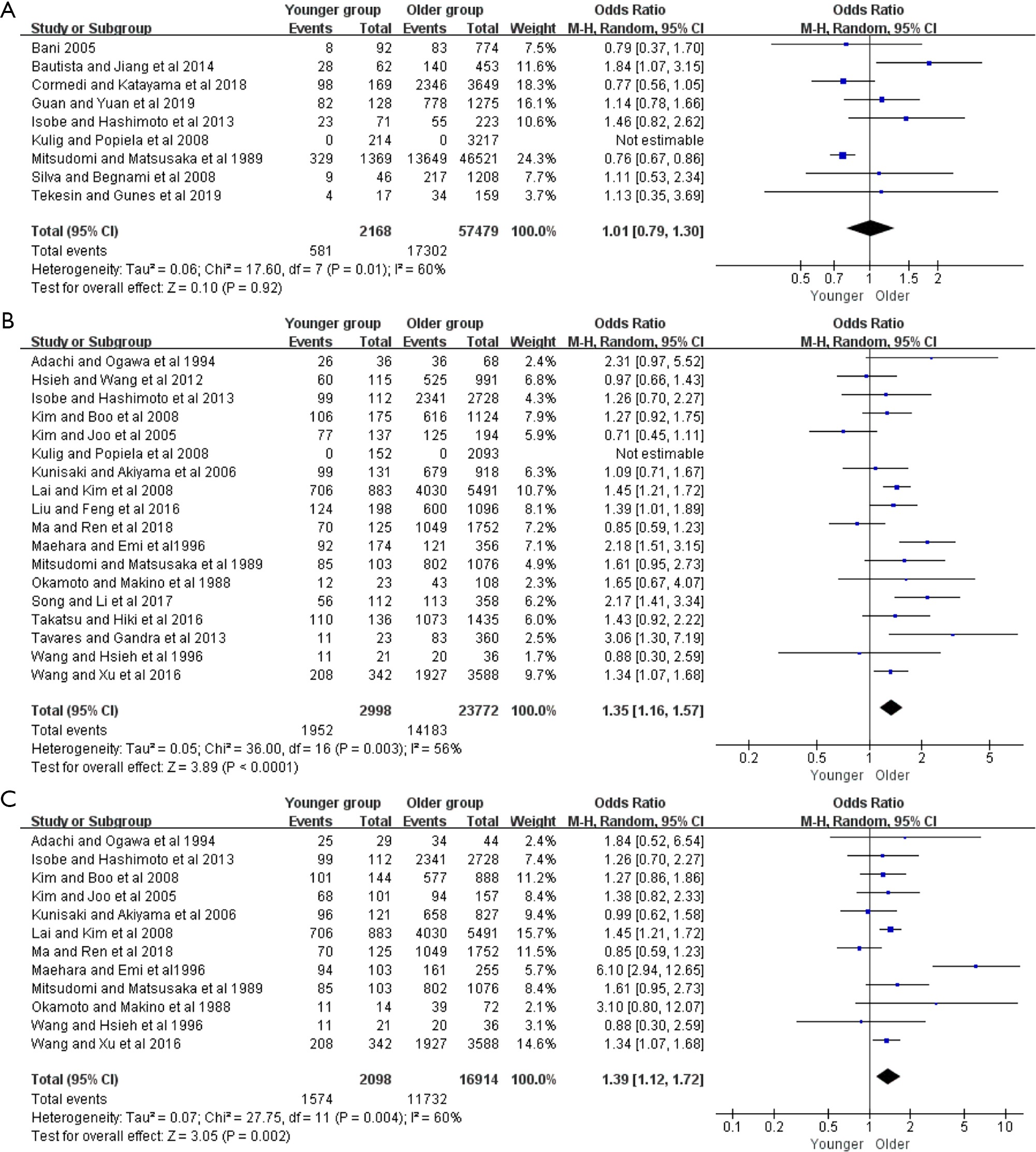 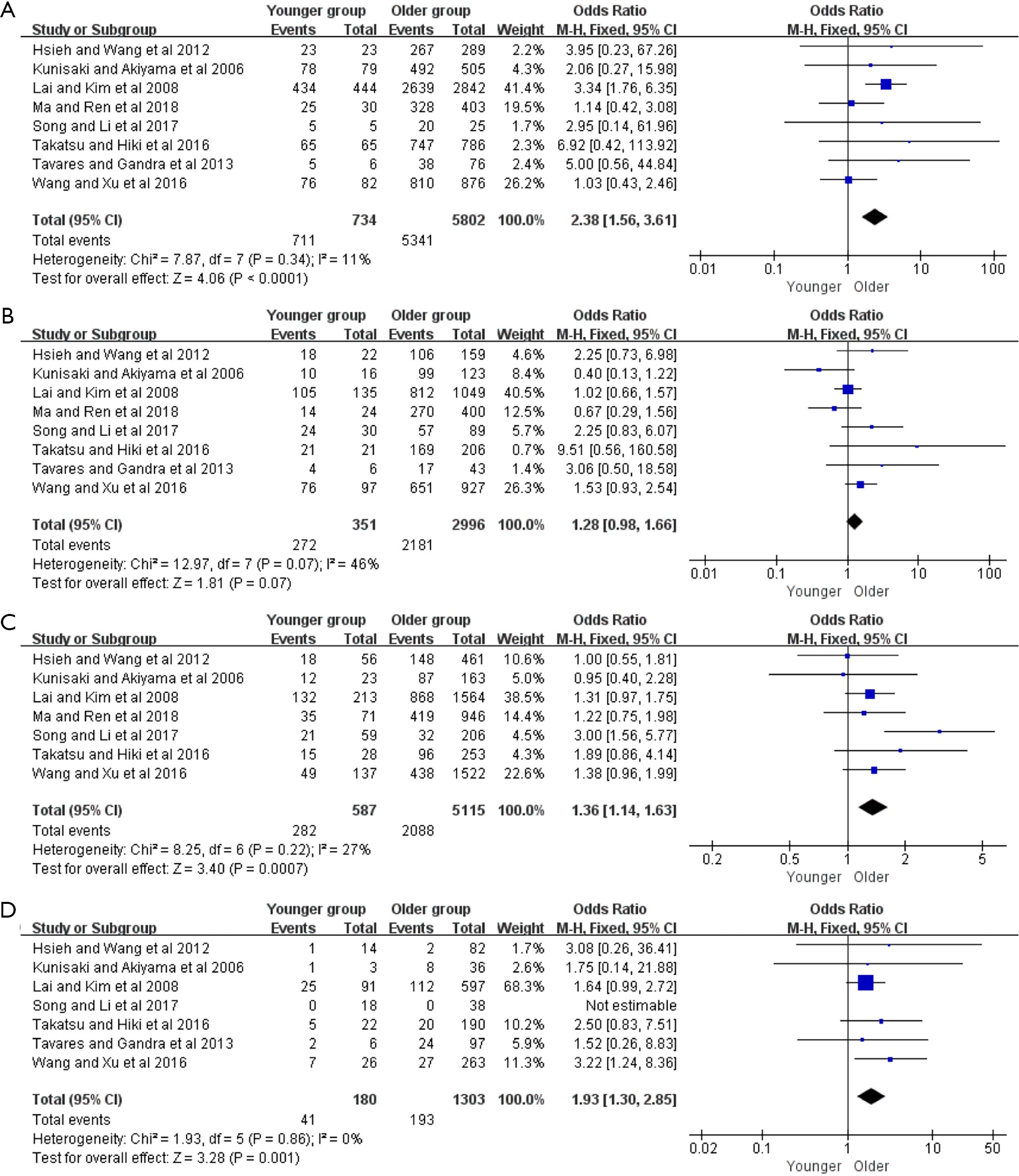 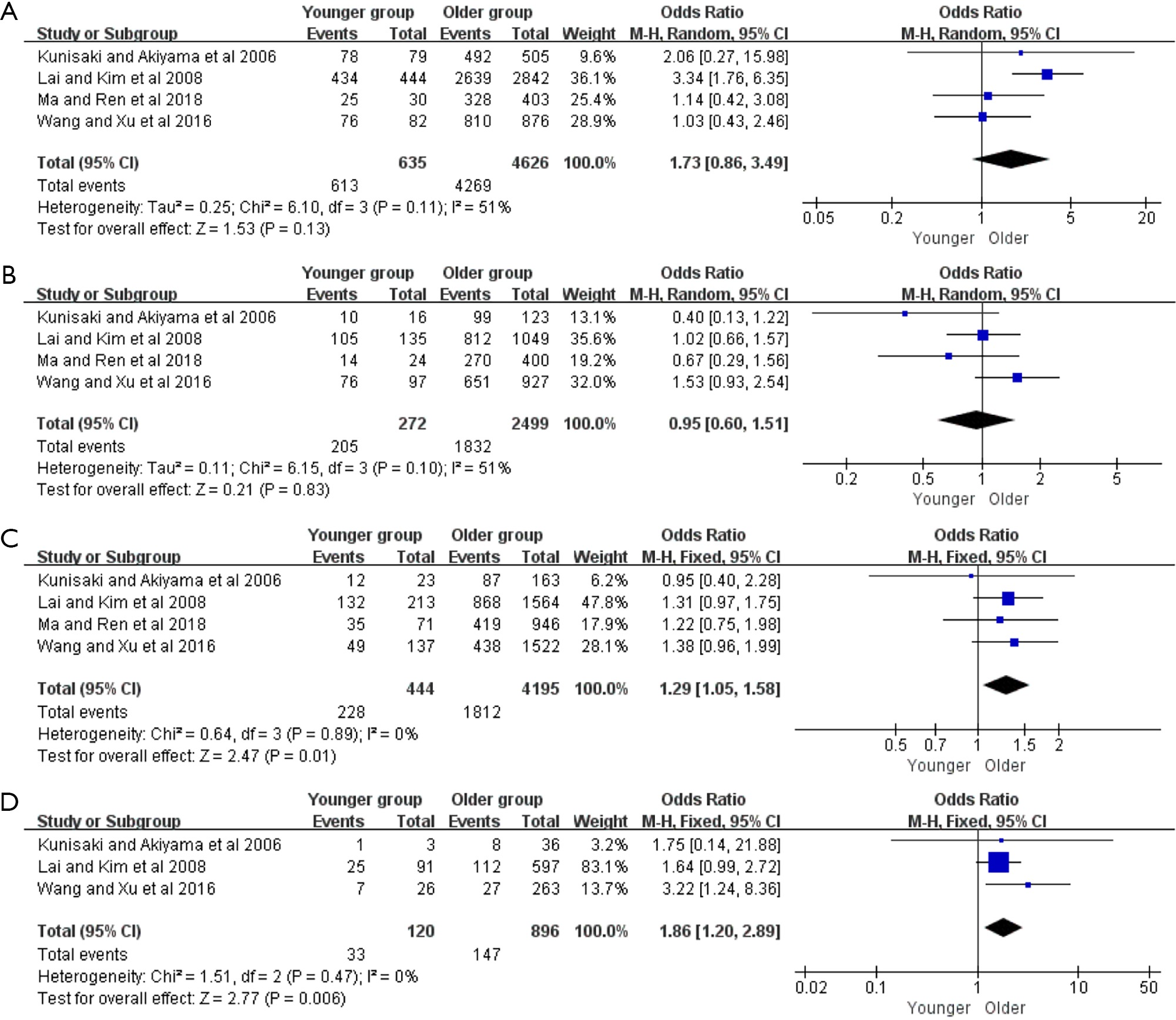 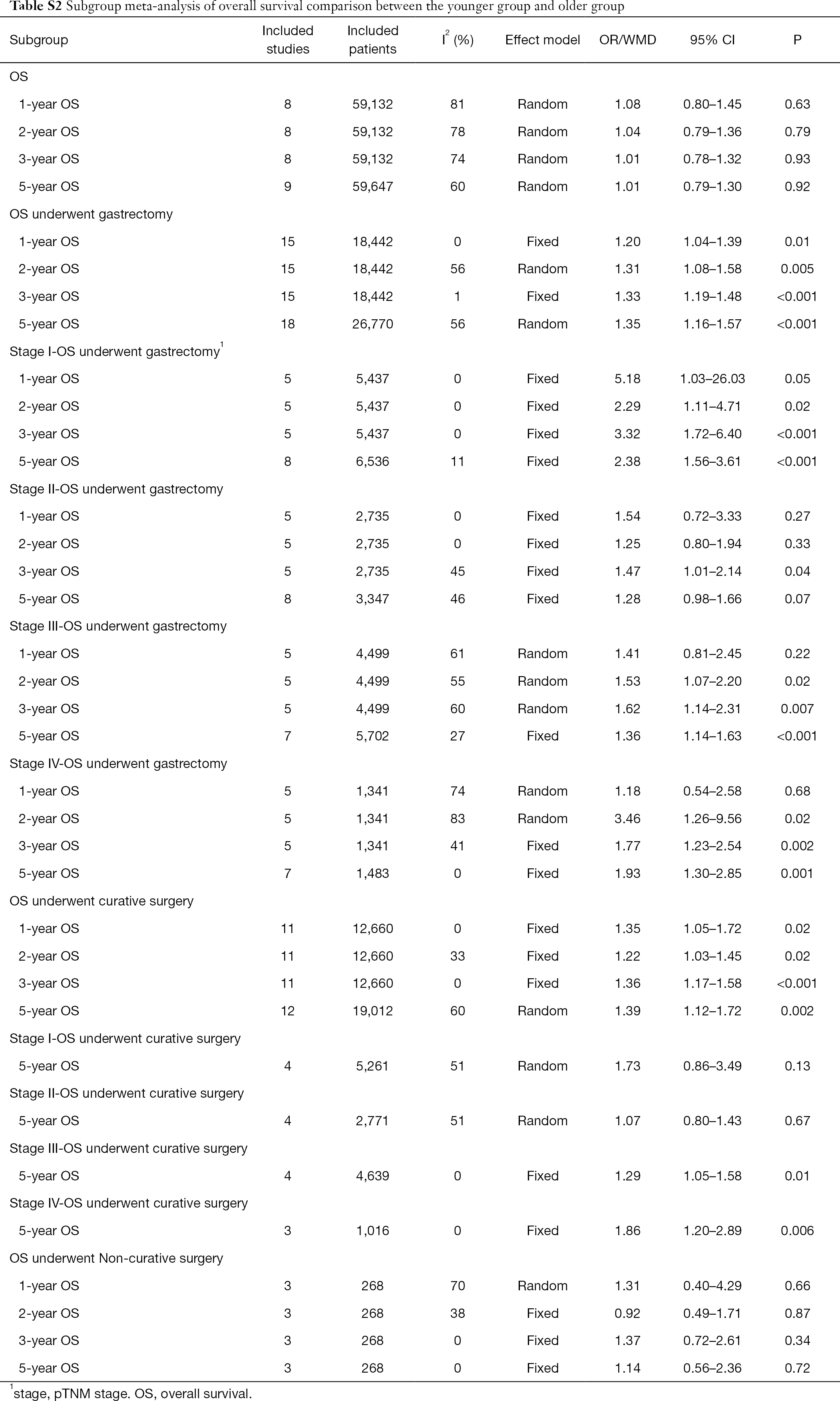 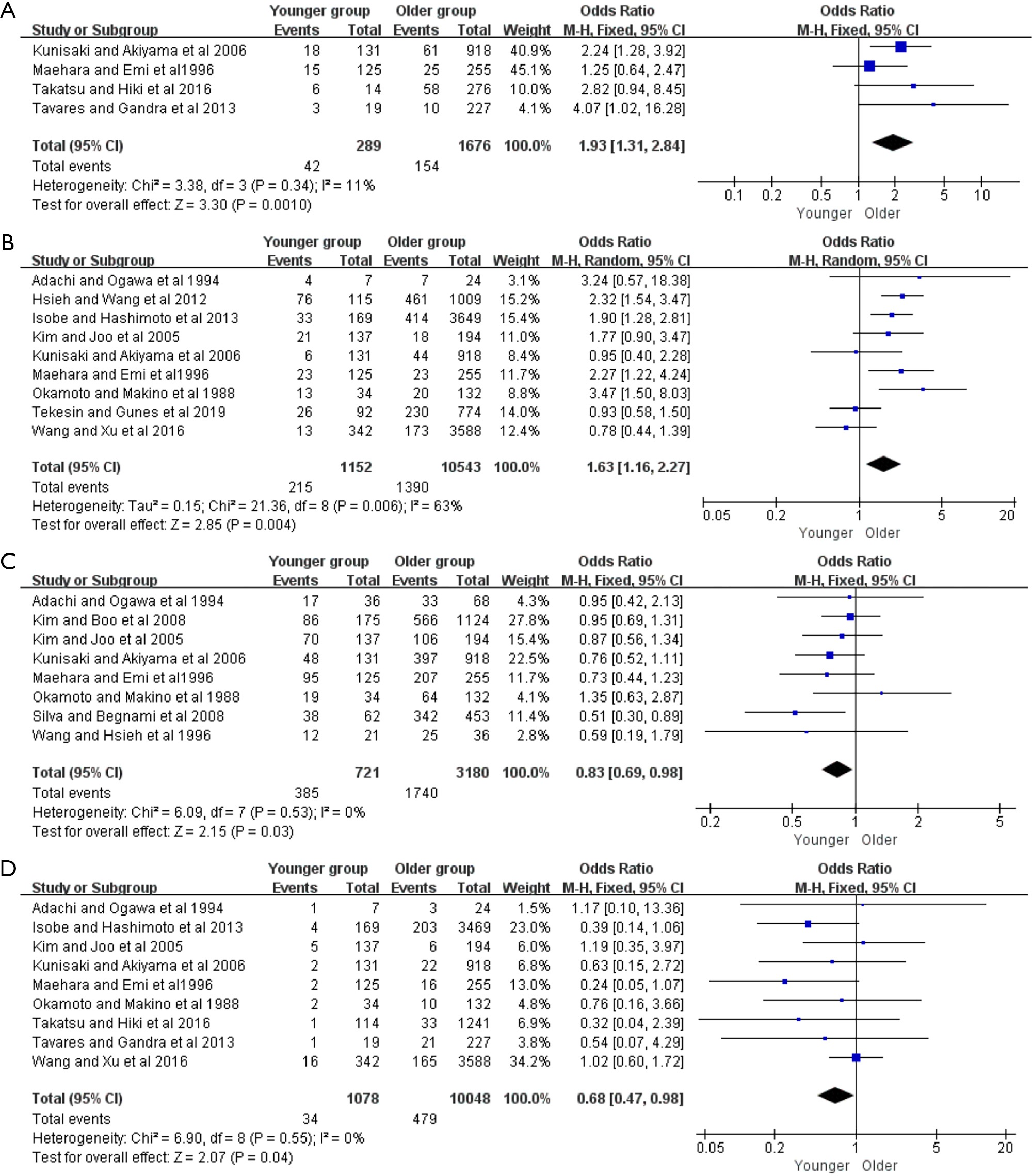 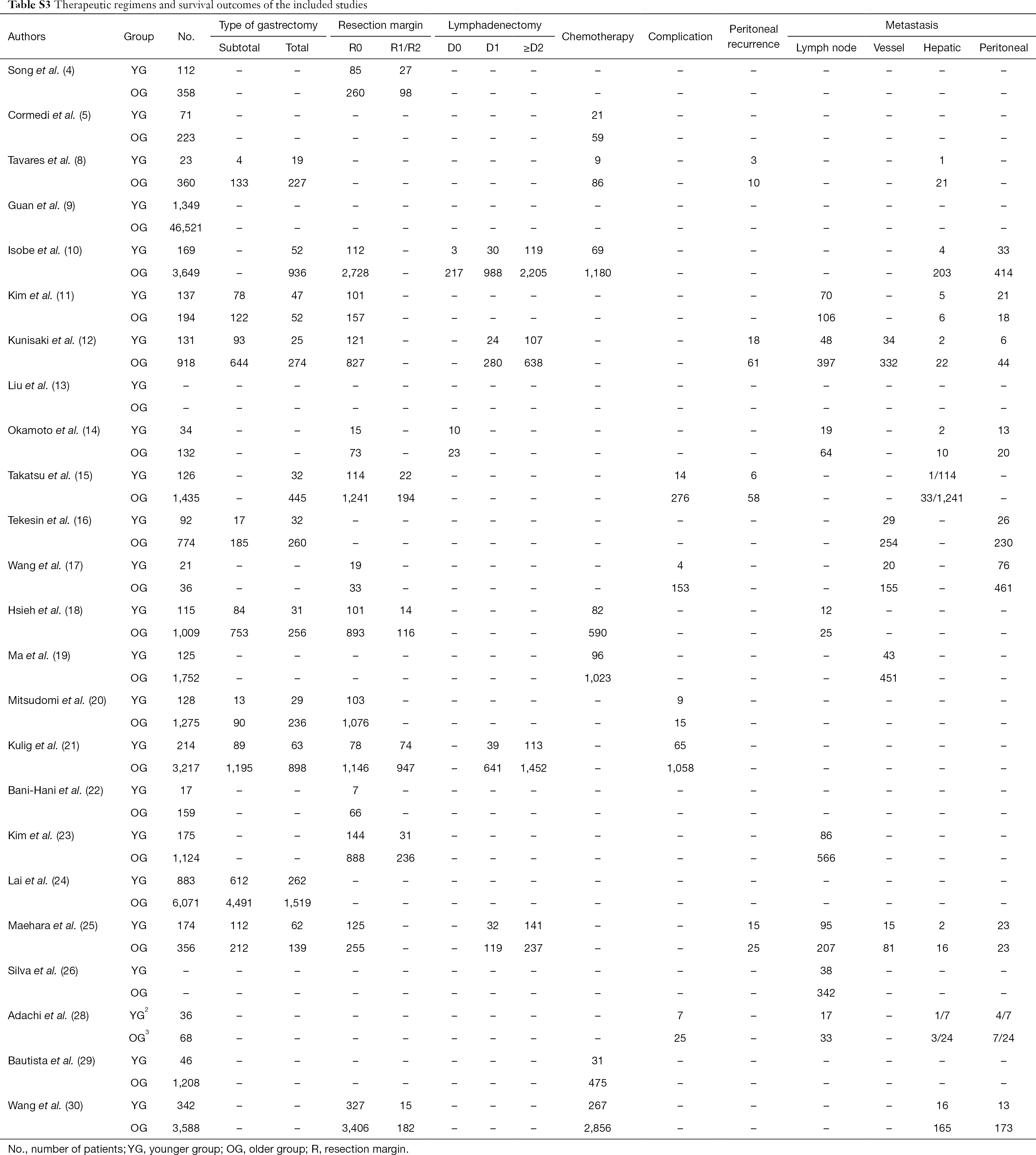 The review and meta-analysis involved 24 retrospective comparative trails and one prospective study with 81,188 patients with gastric cancer. Our findings demonstrated that the younger group after gastrectomy or only curative gastrectomy was correlated with a better OS, but there was no significant difference for total patients between the two groups. To our best knowledge, this analysis was the most extensive evaluation to compare the clinicopathological feature and prognosis between the younger and older group.

Several findings regarding the clinicopathological characteristics in the meta-analysis were in agreement with previous researches, including a higher proportion of female, poorly differentiation, signet ring cell carcinoma, diffuse histology, and pTNM tumor stage IV in younger adults (8-21). Our survey revealed that younger patients had a higher proportion of females, while male predominance was mostly seen in the older group. Although the reasons for female predominance in younger patients were not clear, some potential explanations had been identified. Several studies considered hormonal factors, such as estrogens and higher percentages of estrogen receptor-positive cells might be associated with the predominance of younger females (36,37). Compared to older patients, younger patients with gastric cancer had been believed to be related to genetic changes rather than environmental factors (38). Thereby more frequent exposure to environmental carcinogens, such as cigarettes, might lead to the dominance among older male patients (39). Concerning to histological type, our analysis revealed that poorly differentiation, diffuse-type, and signet ring cell carcinoma were predominant in the younger group. In comparison, more patients in the older group were diagnosed as intestinal type and mucous adenocarcinoma. The primary reason may be germline mutations, specifically in the CDH1 gene, as reported in some researches (26,40,41). While the included studies rarely capture the duration of symptoms before initial diagnosis, other researches have reported delayed diagnosis, and hereditary factors may be closely correlated with advanced gastric cancer (42,43).

Surgery, especially curative resection, was an important approach for patients with gastric cancer (44). There were higher proportions of chemotherapy and ≥ D2 lymphadenectomy in the younger group compared with the older. However, the percentages of total gastrectomy and curative resection revealed no statistical differences between younger and older groups, while subtotal gastrectomy was frequently performed in older patients. These results may be due to the significant comorbidities and impairment of functional status in older patients (45-47). Moreover, a previous study demonstrated that the ratio of older patients who had other synchronous or previous malignancies at initial diagnosis was up to 21% based on Munich Cancer Registry data (48). In our review, postoperative complications were more prevalent in the older group, which also reflected a worse tolerance for surgery or chemotherapy. Several studies investigated that the incidence of postoperative complications was closely correlated with poor prognosis (49,50), thus providing a survival advantage for the younger group.

In this analysis, a tendency of peritoneal metastasis in the younger group may reflect the genetic susceptibility, such as CDH1 and RhoA, that could lead to more aggressive biological behaviors (40,51). Moreover, the infiltration of poorly differentiated gastric cancer was more pronounced in the vertical direction, thus conferring lymph node involvement and peritoneal dissemination. Metastasis was the leading cause of recurrence, and it had been thought that peritoneal metastasis was the most common form of repetition in gastric carcinoma (15). Our finding indicated a higher incidence of peritoneal recurrence in younger patients, which was similar to the other conclusion (12).

Younger gastric cancer patients as a group revealed similar long-term OS compared to older, and this finding was consistent with previous studies (5,10,11,20). In the subgroups of gastrectomy and only curative gastrectomy, both the short-term (including the 1-, 2-, 3-year) and long-term (including the 5-year) OS for older group was more miserable than those of the younger group, possibly due to a more significant percentage of comorbidities and complications. When the 5-year OS under different pTNM stages was evaluated, the results differed substantially between the younger and older group. A trend towards better long-term survival in the younger group may reflect a higher tolerance for the patients given a younger age and fewer comorbidities. Moreover, the shorter life expectancy of the older group compared to the younger may also be responsible.

There were several limitations in the analysis because of the characteristics of the included studies identified. Firstly, only one of the trials we identified was a prospective study. Secondly, most of the included studies were from Eastern Asia, which might not have a great representative and guiding value across the globe, especially in Western countries. Thereby, more related researches were expected to evaluate in gastric cancer patients at a younger age. Thirdly, there were inevitable heterogeneities, such as female ratio, diffuse type, as well as several survival variables in the analysis. The contribution of each included study to the pooled estimate was evaluated in the sensitivity analyses, and the result showed that sources of these heterogeneities were mainly from the selection bias. Furthermore, the lack of available patient data did not allow our analysis to assess disease-specific survival and disease-free survival. Despite these limitations, the study to our knowledge was the most extensive analysis evaluating the clinicopathological characteristics and survival outcomes in the younger and older patients, which may overcome the limitation of small sample size and single-institution targeted the field. Besides, all of the clinical studies involved in the meta-analysis had a high quality and met our inclusion criteria, thus might provide more valuable resources for the clinicians in patients' management and decision-making.

Reporting Checklist: The authors have completed the PRISMA reporting checklist. Available at http://dx.doi.org/10.21037/tcr-20-2024

Conflicts of Interest: All authors have completed the ICMJE uniform disclosure form (available at http://dx.doi.org/10.21037/tcr-20-2024). The authors have no conflicts of interest to declare.