Small cell lung cancer (SCLC), accounts for 15–20% of all lung cancer cases, is one of the most aggressive cancers due to its metastasis and recurrence behaviors (1). Traditionally, a combination of radiotherapy and chemotherapy was the first-line regimen. However, patients with SCLC still have a poor prognosis after effective treatment, with a 5-year survival rate of less than 5%. For patients who did not receive any active treatments, the median survival was only 2–4 months (2).

Programmed death ligand-1 (PD-L1), also known as CD274 and B7-H1, is a transmembrane protein commonly expressed on the surface of antigen presenting cells and tumor cells. Recent studies have shown that blocking the immune checkpoints programmed death-1 (PD-1) and PD-L1 with monoclonal antibodies is a potential new therapeutic strategy in SCLC (3). The PD-L1 inhibitor atezolizumab, combined with carboplatin and etoposide, had proved efficacy in the first-line treatment of extensive-stage SCLC (4). Moreover, PD-L1 expression might be associated with the efficacy of chemotherapy treatment in SCLC (5).

Despite numerous independent studies, the relationship between PD-L1 expression and the clinicopathologic characteristics and prognostic parameters in SCLC remained controversial. Some studies suggested that a higher PD-L1 expression was related to an earlier stage and predicted a better prognosis. For example, in a series of 102 SCLC patients, the PD-L1 expression detected by immunostaining was positively correlated with the LD stage and predicted a favorable outcome (6). The similar results reported that a combined detection of PD-L1/c-MET expression might be a useful panel in the prediction of SCLC patients (7). By contrast, some other researchers demonstrated that the presence of high PD-L1-expressing tumor cells was associated with advanced stage and poor survival in 186 cases of SCLC (8).

In this study, we performed a meta-analysis to systematically assess the relationship between PD-L1 expression and clinicopathology and prognosis in SCLC patients.

We present the following article in accordance with the PRISMA reporting checklist (available at ).

Case-control or cohort studies were mainly identified by conducting a systematic search in PubMed, MEDLINE, Embase, and CNKI databases using the following terms: “PD-L1”, “B7-H1”,”CD274”, “small cell lung cancer”, “prognosis” and “survival”. Reference lists from relevant articles were also examined to find additional publications. All studies were published prior to September 23, 2019. In the initial retrieved literatures, we read the titles or abstracts and screened for prognosis and clinicopathology related research. Studies were included when the following criteria were met: (I) published in English or Chinese with the full text available, (II) the use of a case-control design or a cohort design, (III) the main outcome of interest focused on the clinicopathological features, and survival, and (IV) the availability of data to allow the estimation of the hazard ratio (HR) for survival with a 95% confidence intervals (CI). Accordingly, the exclusion criteria were as follows: (I) reviews, abstracts and repeated studies; (II) the use of duplicate data. No ethnicity or regional restrictions were applied. If an eligible study was retrieved in duplication, only the latest one was included. The review process was performed by two independent reviewers.

Statistical calculations were all performed by using STATA 11.2 statistical software (STATA Corp., College Station, TX, USA). Pooled odds ratio (OR) or HR and their corresponding 95% CI of OS were counted. A HR less than one was defined as a better prognosis in SCLC patients with PD-L1 positive expression, whereas a HR more than one indicated a worse prognosis. Other clinicopathological factors were sorted into several subgroups: gender, tumor stage [limited disease (LD) and extensive disease (ED)], smoking status, and the lever of serum lactate dehydrogenase (LDH). In addition, stratified analyses were performed to investigate the potential causes of heterogeneity according to mean age of patients, tumor stage, cutoff value of PD-L1 expression, antibody clone and antibody type used. Fixed and random effects models were used to calculate a pooled OR and HR. The statistical significance of the pooled OR and HR was evaluated with the Z test and P values. All P values were two-sided and a P<0.05 was considered to be statistically significant. Heterogeneity across studies was evaluated by applying a Cochrane’s Q test. In this approach, the Q value is defined as identical to the effect size of the I2 value. A random effects model was used when the I2 value for heterogeneity test was >50%; otherwise, a fixed effects model was used. Begg’s rank correlation method (9) were used to assess publication bias (P<0.05 was considered to be statistically significant). Sensitivity analysis was performed to examine the stability of the pooled results.

A total of 11 publications (6-9,10-17) range from 2015 to 2019 were identified to meet the criteria for this analysis. The flow chart for the identification of eligible studies was shown in Figure 1. The total number of SCLC patients was 1,303, including 483 cases (PD-L1 positive) and 570 controls (PD-L1 negative). Immunohistochemistry (IHC) was a primary method used to evaluate PD-L1 expression in SCLC specimens. The main characteristics of the 11 eligible studies were summarized in Table 1. 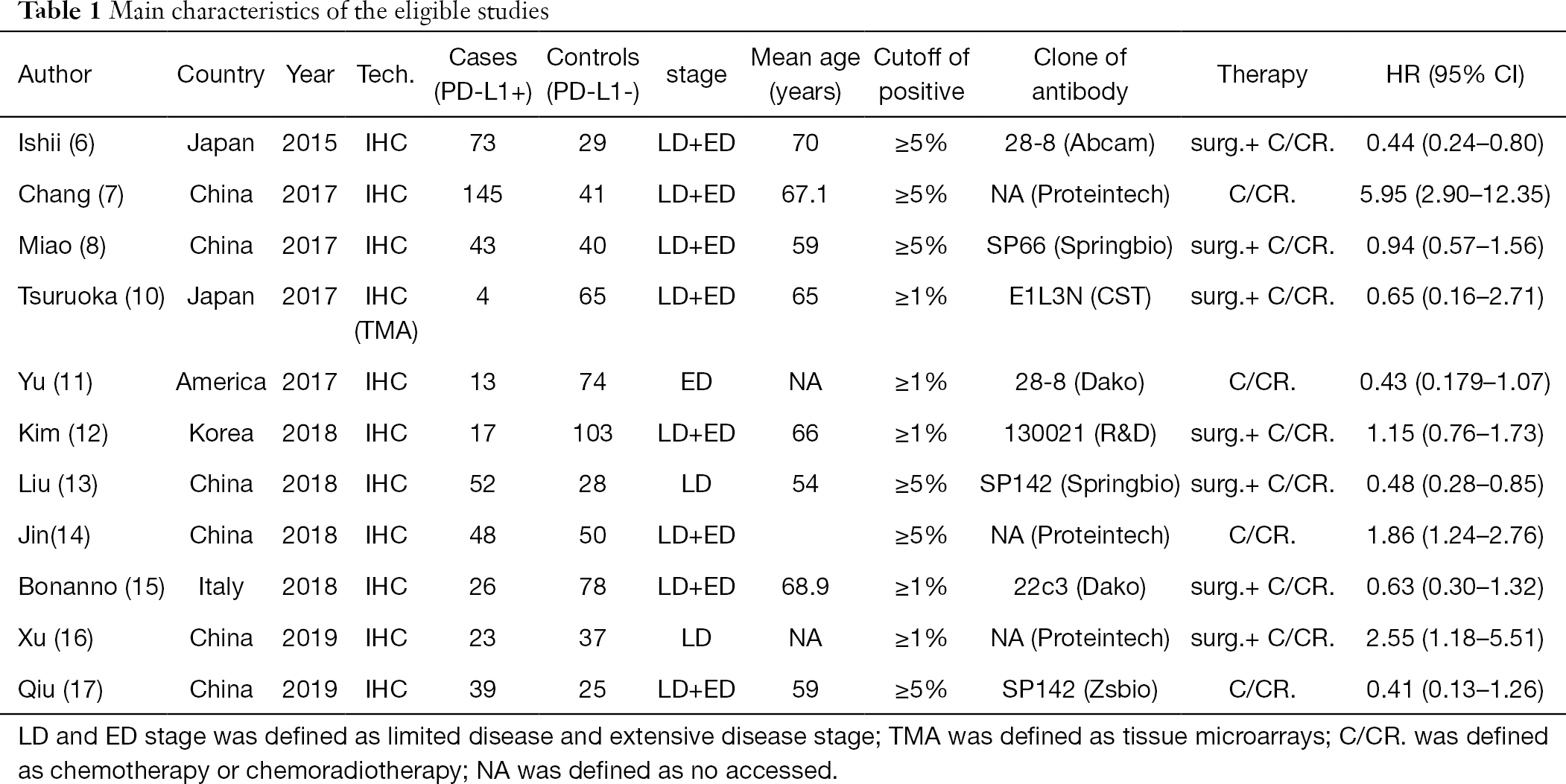 The mean age of patients ranged from 54 to 70 years old. Eight studies reported the data of gender distribution. In terms of the extent of disease, two trials focused on the LD-SCLC, one trial focused on the ED-SCLC, while eight trials included both patients with LD-SCLC and ED-SCLC. The patients in all studies received chemotherapy or chemoradiotherapy, and a portion of patients in seven studies underwent surgical resection. For uniformed data assessment, in the analysis of PD-L1 expression cutoff value, we integrated ≥5% expression group vs. ≥1% expression group. In order to clarify the possible effects of antibodies subtype, all anti-PD-L1 antibodies were specified precisely according to different type [monoclonal antibody (mAb) vs. polyclonal antibody (pAb)], and clone specification for mAb. There were several PD-L1 IHC assays registered in the Food and Drug Administration (FDA), using four different PD-L1 antibody clones (22C3, 28–8, SP263, SP142) (18). Therefore, the four kinds of antibodies were considered as one group, the rest antibodies without FDA approval were considered as other group. 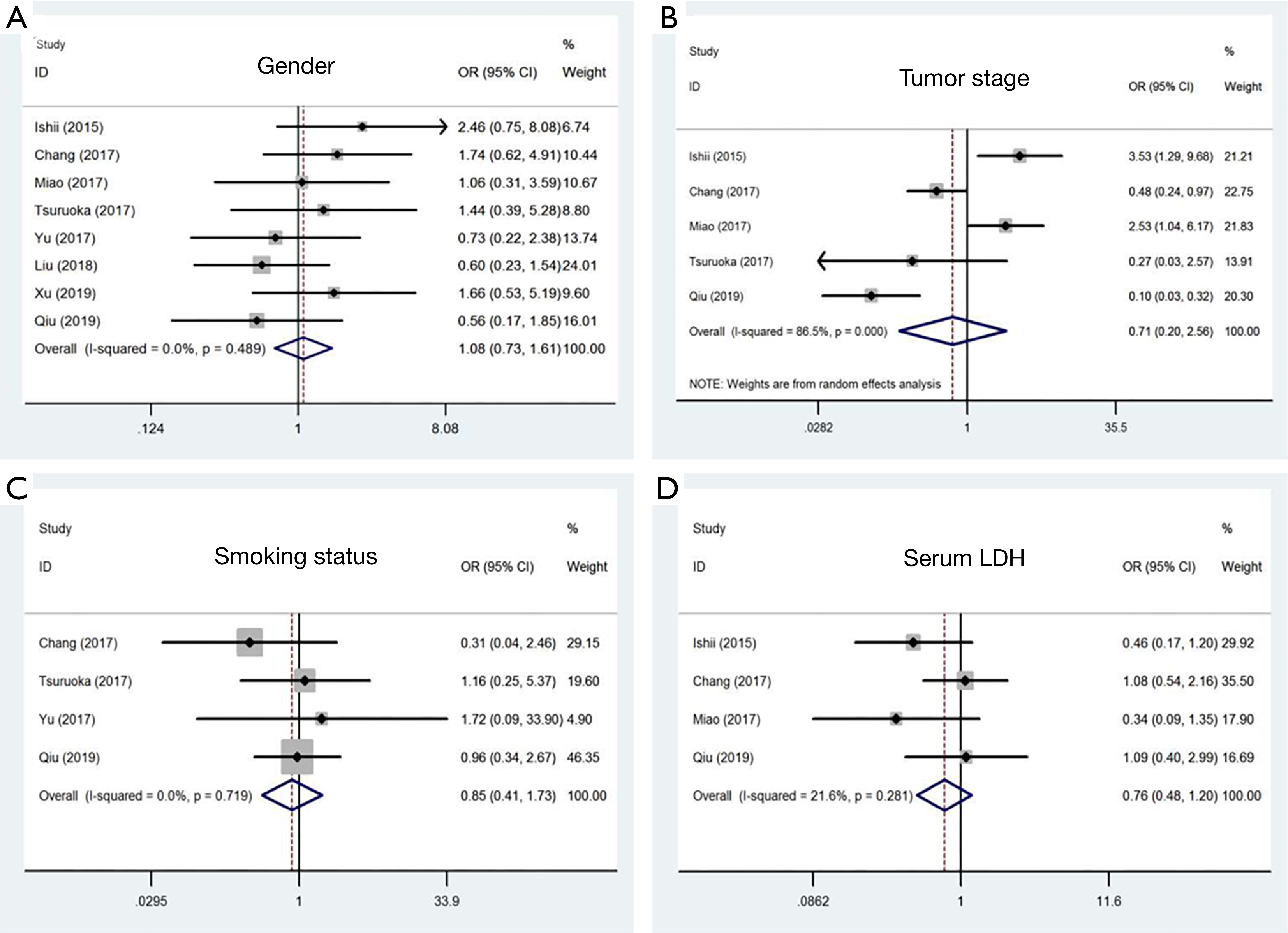 Figure 2 Meta-analysis of the association between PD-L1 expression and clinicopathological parameters: (A) gender; (B) tumor stage; (C) smoking status; (D) the lever of serum LDH.

Impact of PD-L1 expression on survival for SCLC patients

Sensitivity analysis of our meta-analysis was performed through the sequential omission of individual studies according to the method of Duval et al. (19). The corresponding pooled OR was not altered significantly for any study factor after sequentially excluding each study, demonstrating that our data were stable, reliable in this analysis. The detailed results were shown in Figure 5. 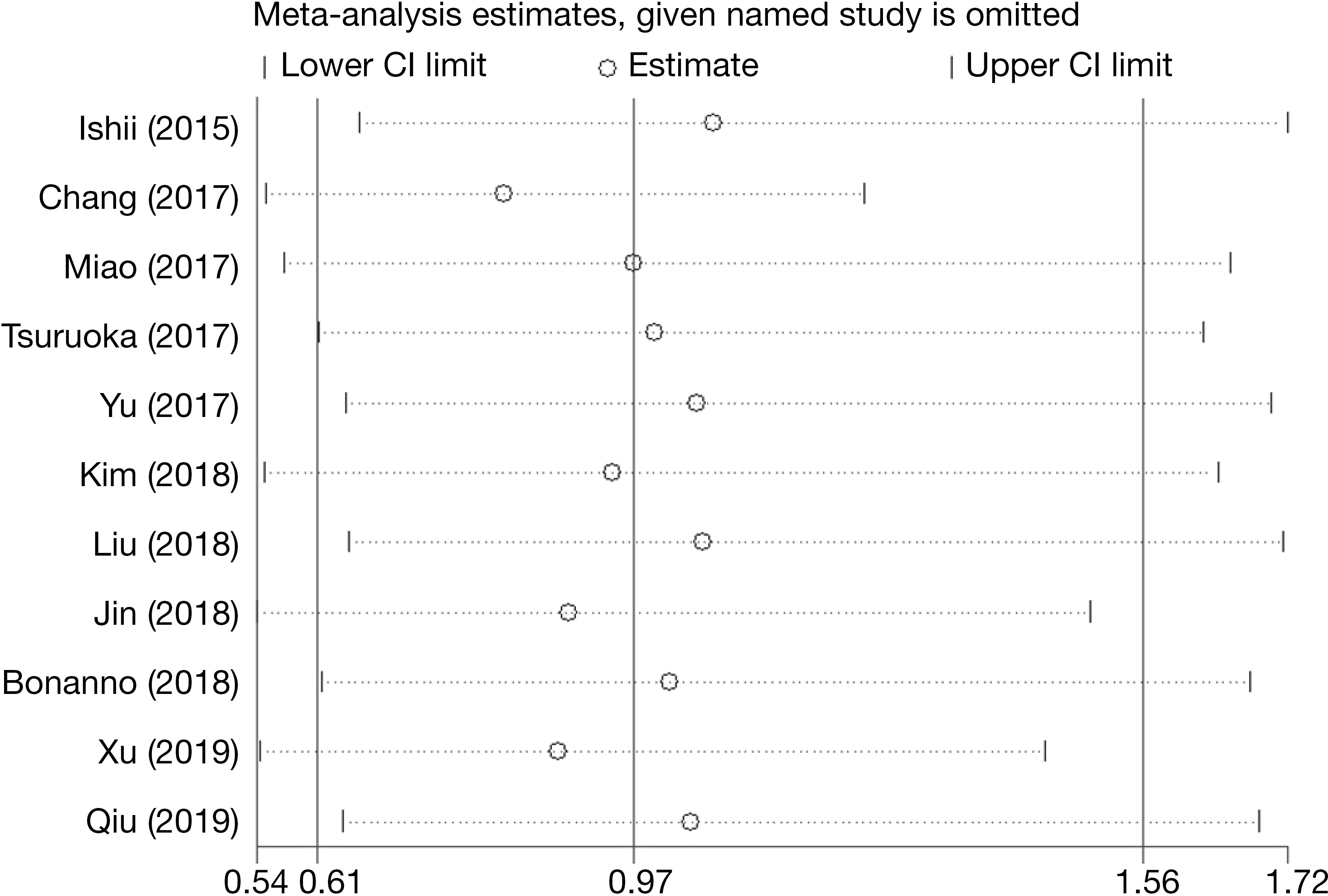 Figure 5 Sensitivity analyses of the PD-L1 expression with OS for the meta-analysis assessing. Omission of any study did not affect the whole estimate results significantly in all outcomes.

PD-L1 is the ligand of PD-1, which plays an important role in inhibiting T lymphocytes activation and inducing immune tolerance. The blockade of this ligand leads to successful immunotherapies by enhancing T cell immune responses against tumor cells. In most clinical trials, PD-L1 protein expression on tumor cells detected by IHC was an important predictive biomarker (20-22). Therefore, many institutions had investigated the relationship between the expression of PD-L1 and the clinicopathological features and prognosis of SCLC patients. However, the clinical significance of PD-L1 in diagnosis and treatment was still controversial in SCLC. For instance, the research by Kim et al. suggested that PD-L1 was not a prognostic factor in SCLC patients (12). On the contrary, several studies reported that PD-L1 was a poor survival prognostic marker (16). Based on these controversial studies, our aim was to evaluate the precise impacts of PD-L1 on clinicopathological features and prognosis of SCLC patients.

In this study, we summarized the outcomes of 1303 SCLC patients from 11 relevant publications related to PD-L1, prognosis, and pathology in SCLC specimen. Our results derived from this meta-analysis of existing studies indicated that PD-L1 could not be used as a better or worse OS prognostic indicator and the increased expression of PD-L1 had no positive association with most clinicopathological features in SCLC patients. Specifically, no patients in this study had received immunotherapy with PD-1/PD-L1 antibody, thus the result could accurately reflect the association between native PD-L1 expression status and overall survival. Similar results had been found in the study of melanoma, which revealed no relevant PD-L1 expression on primary or metastatic tumor stages and no significant correlations with prognosis were found regarding this immunological factor (23). Moreover, it was also found that the results had a significant heterogeneity, which was mainly caused by the differences of IHC antibodies. Previous study suggested that the differences among the samples obtained, the antibodies used, and the defined cut off values might contribute to the inconsistent results (24,25). The results of our meta-analysis showed monoclonal antibodies were more effective than polyclonal antibodies in reducing the detection heterogeneity, while the four FDA approved clone specifications had the best consistency.

The relationship between PD-L1 expression and tumor progression remained unclear. Some earlier studies reported that expression of PD-L1 protein was associated with poor prognosis in patients with NSCLC, esophageal carcinoma, gastric carcinoma, hepatocellular carcinoma, pancreatic carcinoma, and renal cell carcinoma (26-32). However, it also found that expression of PD-L1 was associated with better prognosis in patients with several solid tumors including NSCLC, colorectal cancer, and breast cancer (33-35). These contradictory conclusions might be due to several reasons. Firstly, previous researches had not standardized the use of antibodies, and various antibodies in different studies would seriously affect the quality and homogeneity of results. In our study, the result of prognosis was completely opposite between mAb and pAb subgroups, and this contradiction was partly due to the strong heterogeneity by using polyclonal antibody or non-FDA approved clone specifications. When this heterogeneity was minimized by stratified analysis, the higher PD-L1 expression could predict an improved survival prognosis (HR=0.48, 95% CI: 0.35–0.66) in SCLC. Interestingly, our finding was consistent with the latest published literature, which represented the largest cohort of cases in the association study between PD-L1 expression and survival in NSCLC patients so far. ALL IHC staining was carried out using the FDA approved Dako 28-8 assay in that study (36). Secondly, previous studies had shown that PD-L1 expression was driven by various oncogenic signaling pathways (37). Finally, the effective chemotherapy, which was an important factor for better prognosis in SCLC, might weaken anti-tumor immunity by regulating the expression of PD-L1.

Some limitations of this meta-analysis also should be noted. First of all, all studies included in our meta-analyses were retrospective. Larger multicenter prospective studies based on homogeneous populations were necessary in the future. Moreover, publication bias was inevitable. The assay used SP142 antibody detected both tumor cells and immune cells into a combined score. However, the assay used 22C3, 28–8 and SP263 only took into account tumor cells. Therefore, there was an heterogeneity in this group. Finally, most of papers (9 out of 11) we found came from Asian and these results could not represent the whole world population.

To conclude, our work is the first study to systematically estimate the association between PD-L1 expression and survival prognosis in SCLC patients. This meta-analysis indicates that PD-L1 is not an important predictor of most clinicopathological features of SCLC patients. However, our results may predict an improved survival when using mAb or FDA approved clone specifications in IHC assays.

Reporting Checklist: The authors have completed the PRISMA reporting checklist. Available at http://dx.doi.org/10.21037/tcr-20-1512a

Conflicts of Interest: All authors have completed the ICMJE uniform disclosure form (available at http://dx.doi.org/10.21037/tcr-20-1512a). The authors have no conflicts of interest to declare.