Mucinous breast cancer (MBC) is a rare histological type, which was reported to account for 1% to 7% of all invasive breast cancer (1-3). Previous studies suggested that MBC differs from other histological breast cancer types and has favorable prognosis (90% overall survival and 96% breast cancer-special survival at 10 years) (4,5). MBC was associated with a smaller tumor size, lower rates of nodal involvement, a high expression of hormone receptors (HR) and more human epidermal growth factor receptor 2 (HER2)-negative than infiltrating ductal carcinoma (IDC) (2,6). What is confusing is that whether the good prognosis of MBC is due to good biological behavior or just as an independent prognostic factor. However, some previous reports have biased results due to the limitation of study population and insufficient follow-up time. Additionally, most of the current treatment guidelines for MBC are extrapolated from IDC, and these disputes may affect MBC therapeutic strategies. Therefore, this may help us interpret the clinicopathological characteristics and prognosis of MBC better base on a larger population and longer follow-up time, and develop more accurate therapeutic strategies for MBC patients. Furthermore, the NCCN guideline (V2. 2019) recommends using the estrogen receptor (ER) and progesterone receptor (PR) status as the important influencing factor for therapeutic strategies. As far as we know, few studies have focussed on the effect of histology type (MBC versus IDC) for prognosis by subtype in women with breast cancer. We conducted a subgroup analysis to investigate the effect of histology type (MBC versus IDC) on the BCSS by different subtypes of breast cancer with a large study population by using the Surveillance, Epidemiology and End Results (SEER) database. We present the following article in accordance with the STROBE reporting checklist (available at http://dx.doi.org/10.21037/tcr-20-1237).

Data were obtained from the SEER cancer database, which consists of 18 cancer registries across the United States and is regarded as nationally representative. We selected women age 18 or older between 2004 and 2012 who pathologic confirmation of non-metastatic unilateral IDC (International Classification of Diseases for Oncology code, ICD-0-3 8500/3) and MBC (MBC, ICD-0-3 8480/3). Those who either had had a previous diagnosis of malignant tumor or who without surgically treated were excluded in our study. All patients who were missing ER or PR status and survived less than one month were also excluded. Finally, we identified 255,834 patients, among who 7,083 were diagnosed with MBC and 248,751 with IDC. The study was conducted in accordance with the Declaration of Helsinki (as revised in 2013). Our study was approved by the Affiliated Quanzhou First Hospital of Fujian Medical University Ethics committee (No. 002965).

SEER*Stat version 8.3.5 was used to obtain the demographic, pathological characteristics and therapy information on the following factors: year of diagnosis, age at diagnosis, race/ethnicity, American Joint Committee on Cancer (AJCC) TNM stage, histologic grade, the status of ER, PR and human HER2, surgery, chemotherapy, radiation, and breast cancer-specific survival (BCSS). All of variables were regrouped and given in Table 1. 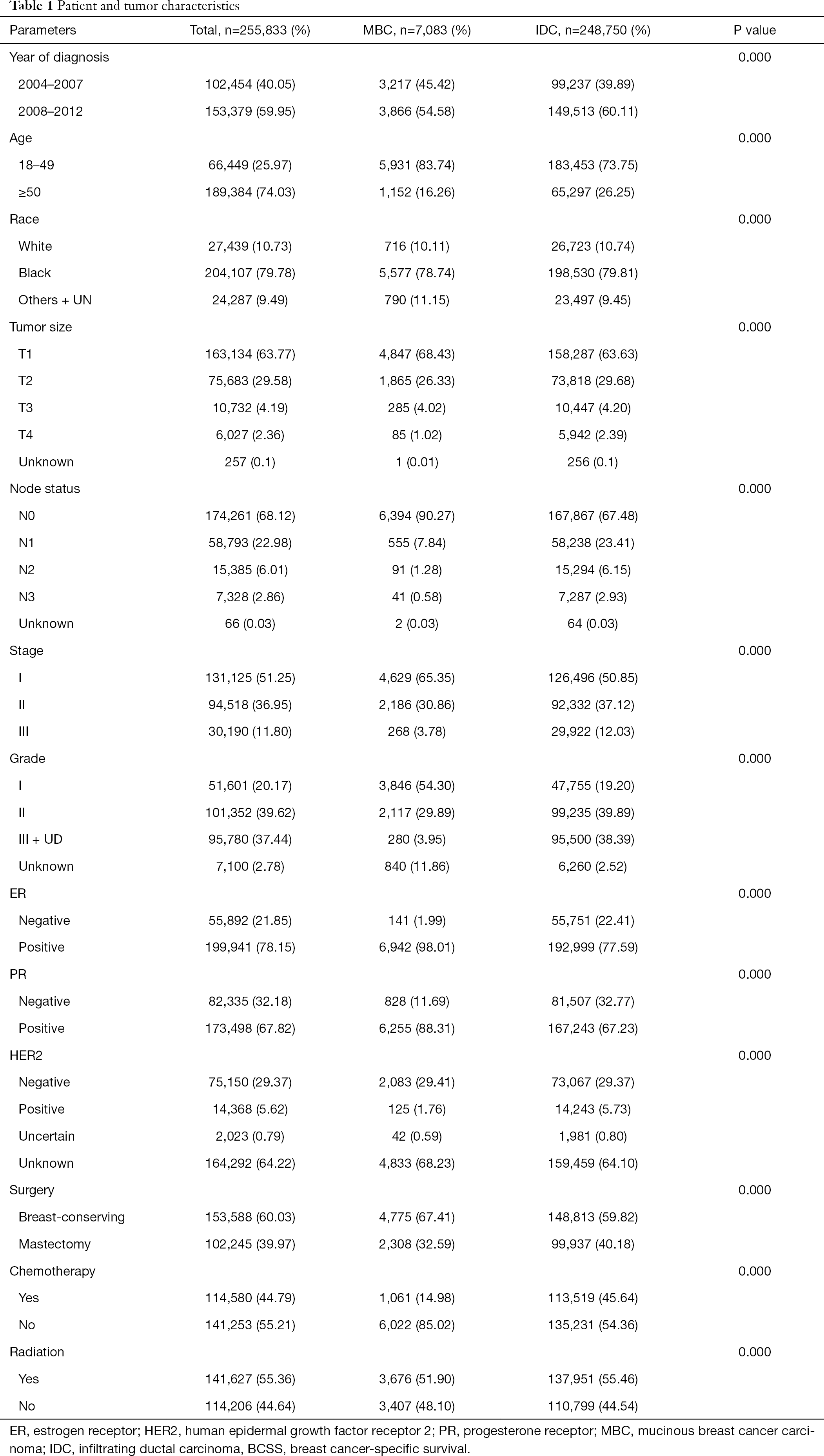 Analyses were conducted using Stata software (version 15.1) and assumed a 2-tailed α =0.05. The breast cancer-special survival (BCSS), which was defined as the time from diagnosis to the death caused by breast cancer, was considered as the outcomes of our study. The follow-up deadline was December 31, 2015. We compared demographics and clinicopathological characteristics between MBC and IDC using the Chi-square test or Fisher exact test. The Kaplan-Meier plot was used to analyze survival curves. Univariate and multivariate Cox proportional hazard models were applied to assess the relationship between these factors and BCSS.

In order to resolve the differences in baseline characteristics across groups, we used the propensity score matching method to match each MBC patient to one IDC patient based on these factors, and tested the matching quality for the balance. Multivariable Cox proportional hazards regression was developed to estimate the HR and 95% CI for the relationship between histology subtype (MBC versus IDC) and BCSS within each subgroup (according to ER or PR status). Adjustments were then carried out on multivariate analyses which included patient’s age, race, stage, grade, surgery, chemotherapy and radiation. 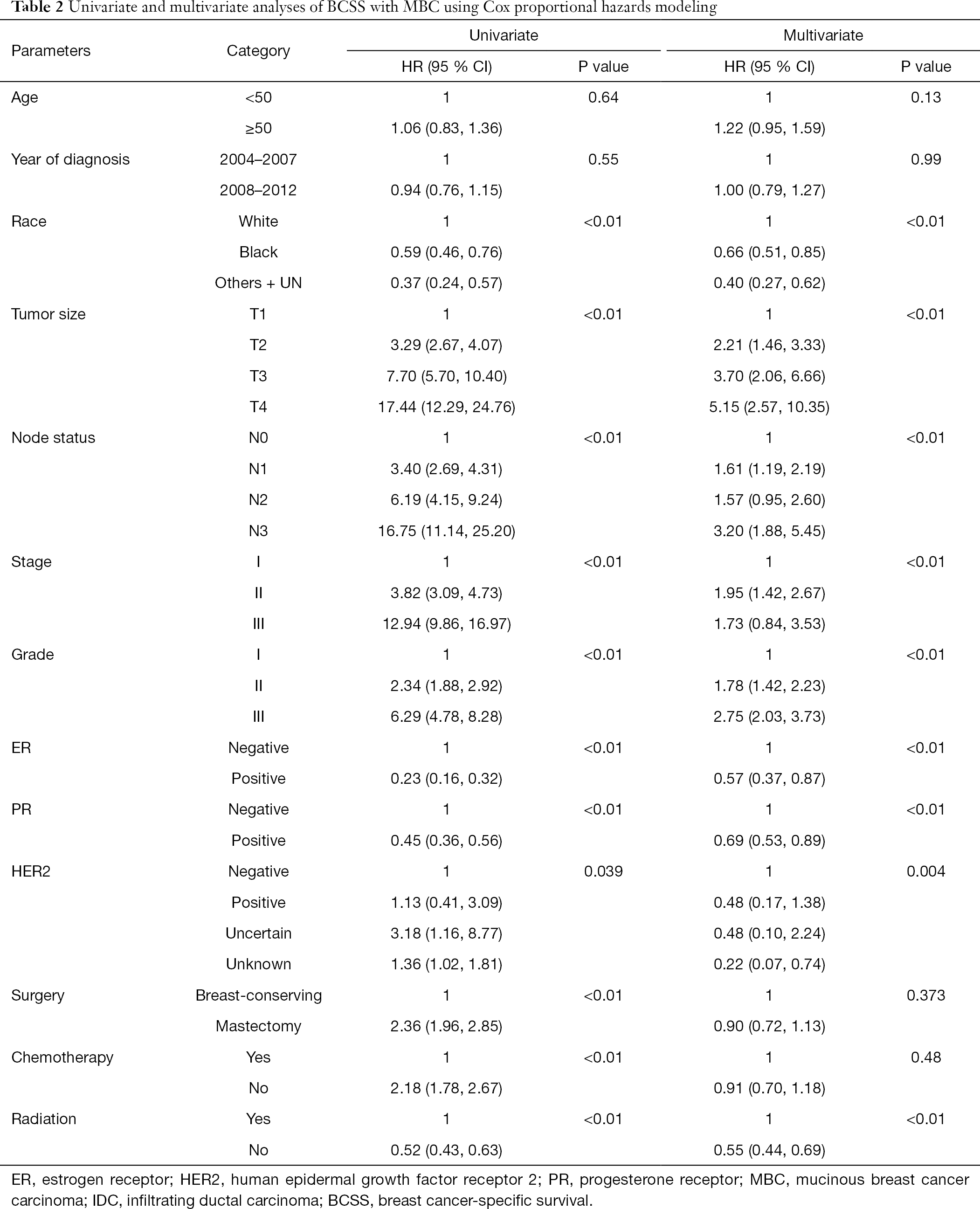 From the Figure 1, patients with MBC were associated with better BCSS than the overall IDC population. We obtained a group of 7,083 IDC patients as matched groups through 1:1 (MBC/IDC) propensity score matching method. We found no statistically significant difference in characteristics between MBC and IDC except histologic grade (Table 3). Furthermore, we found that MBC patients still presented better BCSS than the Matched IDC (Figure 2). 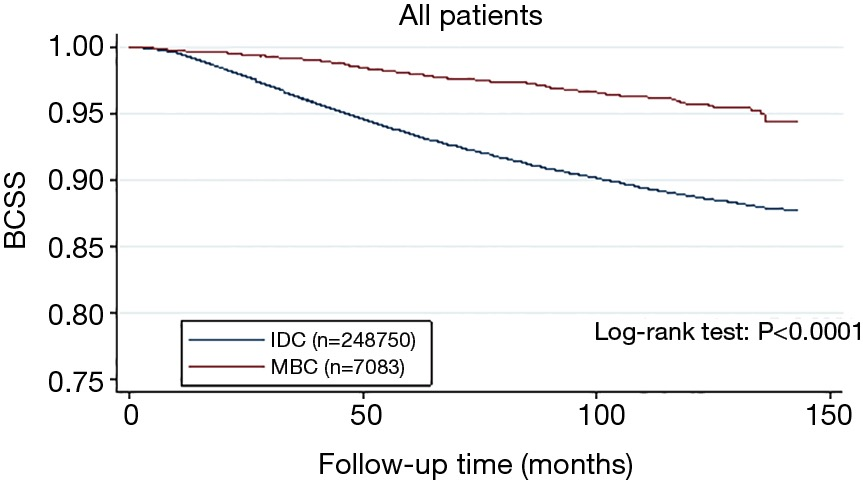 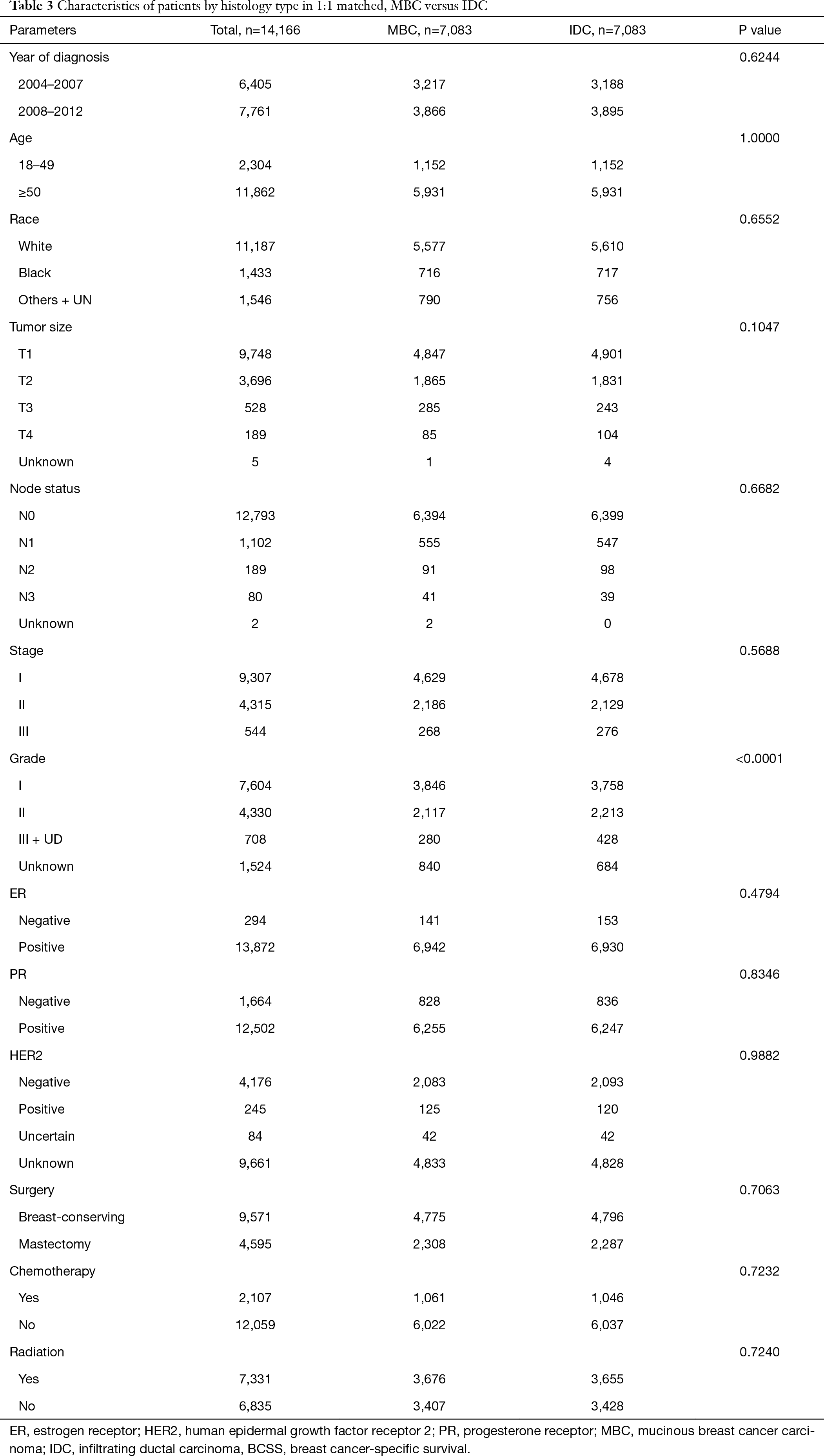 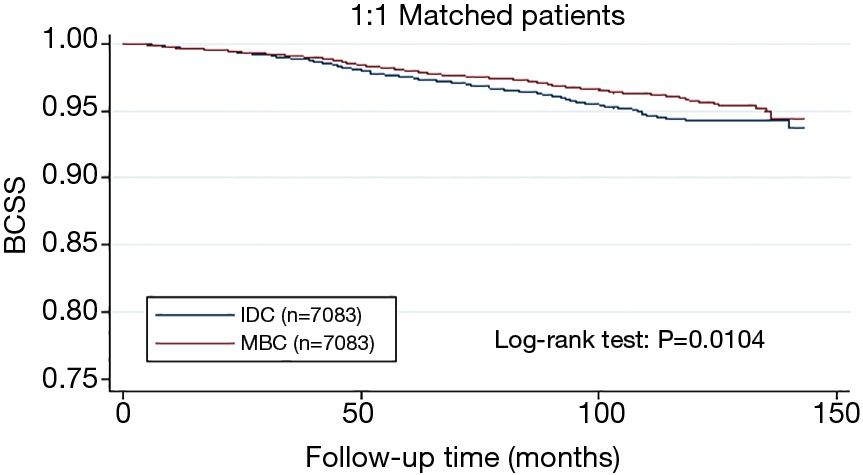 Multivariable Cox proportional hazards regression was used to describe the association between histology type (MBC and IDC) and BCSS by subtype. After adjusting for age, race, stage, grade, surgery, chemotherapy and radiation, MBC patients in the ER+PR+ subgroup was significantly better than that Matched IDC patients for BCSS (HR =0.78, 95% CI, 0.63–0.96). Additionally, the survival analysis in the ER+PR− or ER-PR− subgroups suggested that the BCSS of MBC patients was similar to that of Matched IDC patients (Table 4).

Our study aimed to investigated the clinicopathological characteristics and survival outcomes of MBC, and explore the effect of histology type (MBC versus IDC) on the BCSS by subtypes based on a large population. Our findings indicated that MBC have favorable clinicopathological characteristics, fewer nodal involvement, lower grade, earlier tumor stage and more hormone receptor positive, and are associated with better BCSS for overall IDC. Furthermore, to make sure that baseline balanced in demographic and tumor characteristics across histologic types, we carried out a 1:1 (MBC/IDC) matched case-control analysis using the propensity score matching method to evaluate the survival outcome between MBC and IDC and the subgroup analyses. We found that MBC presented similar better prognosis than the Matched IDC for BCSS. MBC patients present a better prognosis for those with the ER+PR+ subtype but not in those with ER+PR− or ER−PR− disease.

As the largest study of MBC to date, our study utilizes a large number of SEER datasets to investigate the clinicopathological characteristics. Just as reported in previous studies, the BCSS of MBC was significantly better than IDC, however, this may be mostly due to the fact that the clinicopathological characteristics of MBC was superior to IDC. The MBC histological type showed lower grade, smaller tumor size, few nodal involvement, earlier stage, higher expression of hormone receptors than IDC. Therefore, propensity score matching was used to match baseline characteristics and ensured these between MBC and IDC groups balanced. After 1:1 matching of MBC with IDC by age, race, tumor size, node status, stage, grade, ER status, PR status, HER2 status, subtype, surgery, chemotherapy and radiation, MBC showed similarly the better BCSS than Matched IDC. These results imply that the MBC histological type seem to be an independent prognostic factor.

More and more experts recommend molecular subtypes of breast cancer as the important reference factors for therapeutic strategies. Our study focused on subgroup analysis using the ER and PR statuses of MBC and Matched IDC. A multivariate Cox analysis indicated that MBC was an independent predictor of a better BCSS compared with Matched IDC in ER+PR+ group. From the Table 3, we see that the difference whether in chemotherapy or radiotherapy group between these two pathological types was not showed statistically significant. Endocrine therapy was available in this subtype. Unfortunately, we failed to acquire data about that. We considered that MBC perform better endocrine-responsive than Matched IDC in the ER+PR+ subtype. However, MBC seem not exhibited a significantly better BCSS than Matched IDC in ER+PR− or ER−PR− subgroups. Several studies had reported that loss of PR was associated with one mechanism for endocrine resistance and resulted for higher risk of relapse (7,8). Furthermore, it has reported that ER+PR− tumors are more likely to have high expression of epidermal growth factor receptor (8-11). Bae et al. has suggested that ER+PR− had comparable poor survival to ER−PR− tumors with invasive ductal carcinoma (8-11). It can be seen that the ER+PR− tumors in MBC should be treated aggressively as same as IDC.

Our research also has several limitations. First, it is a retrospective study and may have some potential selection bias. Then we failed to differentiate mixed mucinous carcinoma and pure mucinous carcinoma. Furthermore, the status of HER2 was not included for further subtype analysis, but HER2 information in the SEER datasets was not available until 2010 and resulted for lacking adequate patients for subgroup analysis. However, our study is the first to incorporate ER and PR status for subgroup analysis in the MBC survival studies. Further studies are needed to focus on its molecular subtypes.

In conclusion, MBC is a histological subtype that is distinct from IDC with favorable clinicopathological characteristics and prognosis. MBC seems to be an independent factor for the better prognosis with ER+PR+ breast cancer but not in those with ER+PR− or ER−PR− disease. Therefore, an escalated therapeutic strategy may be considered for ER+PR− or ER−PR− MBC patients.

Funding: This work was supported by grants from the Science and Technology Programme of Quanzhou (2018N073S).

Reporting Checklist: The authors have completed the STROBE reporting checklist. Available at http://dx.doi.org/10.21037/tcr-20-1237

Conflicts of Interest: All authors have completed the ICMJE uniform disclosure form (available at http://dx.doi.org/10.21037/tcr-20-1237). The authors have no conflicts of interest to declare.

Ethical Statement: The authors are accountable for all aspects of the work in ensuring that questions related to the accuracy or integrity of any part of the work are appropriately investigated and resolved. All methods were carried out in accordance with relevant guidelines and regulations. The study was conducted in accordance with the Declaration of Helsinki (as revised in 2013). Our study was approved by the Affiliated Quanzhou First Hospital of Fujian Medical University Ethics committee (No. 002965).