GICCS and malignant gastrointestinal neuroectodermal tumours (GNETs) are collectively called GICCS-like tumours by some scholars, though it remains controversial as to whether these two should be regarded as different diseases or disease at different stages (1). Many tend to use the term “clear cell sarcoma” when the cells are positive for Melan-A, HMB45 or MITF and GNETs instead when these markers are negative. Previous studies (2,3) have focused on the clinical or pathological features of GICCS, while neglecting their imaging findings. This paper reports a case of rectal clear cell sarcoma, focusing on the CT and MRI images that differentiate it from other diseases, as well as highlighting the diagnostic value of energy spectrum CT. We present the following case in accordance with the CARE reporting checklist (available at http://dx.doi.org/10.21037/tcr-20-1771).

The patient, a 54-year-old female, was admitted in 2020-02-27 due to intermittent hematemesis for more than a month. Gastroscopy in the previous hospital showed a protruded mass in the gastric fundus, suggesting a gastrointestinal stromal tumour (GIST), though not confirmed by a biopsy. 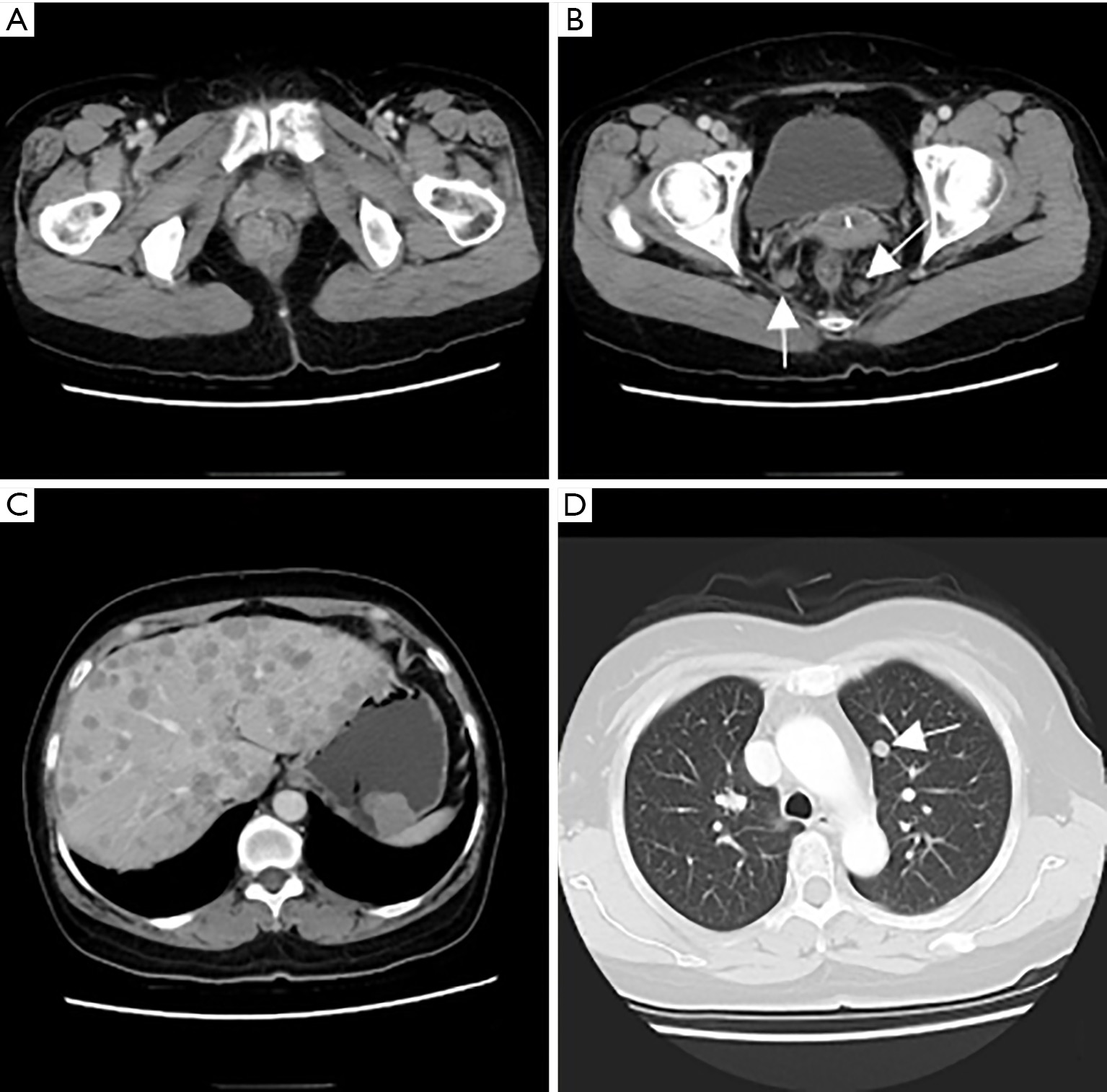 Figure 1 CT of chest and abdomen. (A) Mass inside and outside of the lower rectum that showed obviously enhancement; (B) enlarged mesenteric lymph nodes were dispersed around (arrows); (C) protruded mass in the gastric fundus which also showed obviously enhancement, multiple metastatic lesions of liver; (D) small nodule in the left upper lung (arrow). CT, computed tomography. 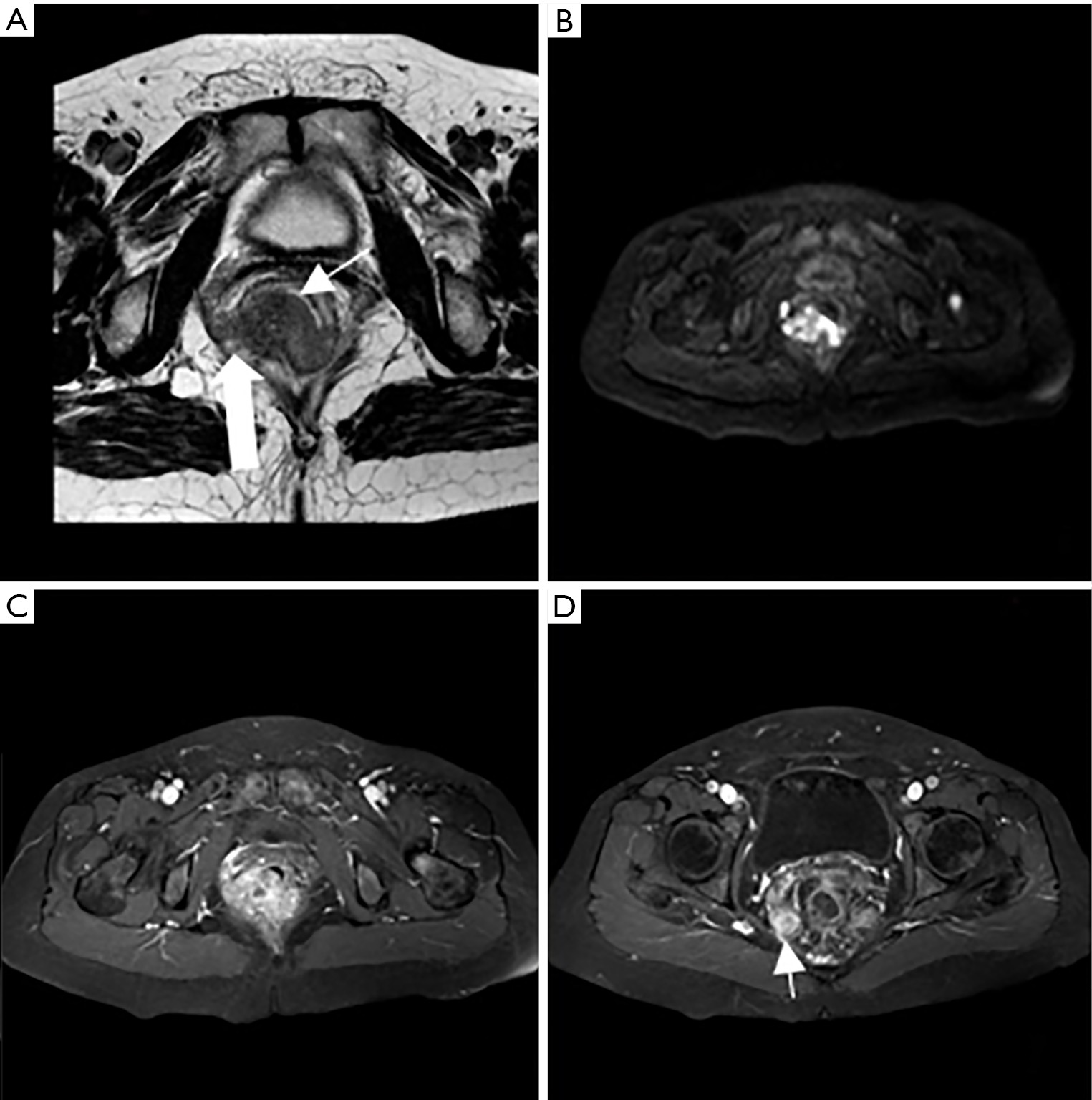 Rectal biopsy confirmed the diagnosis of GICCS (Figure 3). Liver aspiration confirmed a metastatic malignant tumour, with morphology and immunohistochemistry in line with the rectal biopsy. 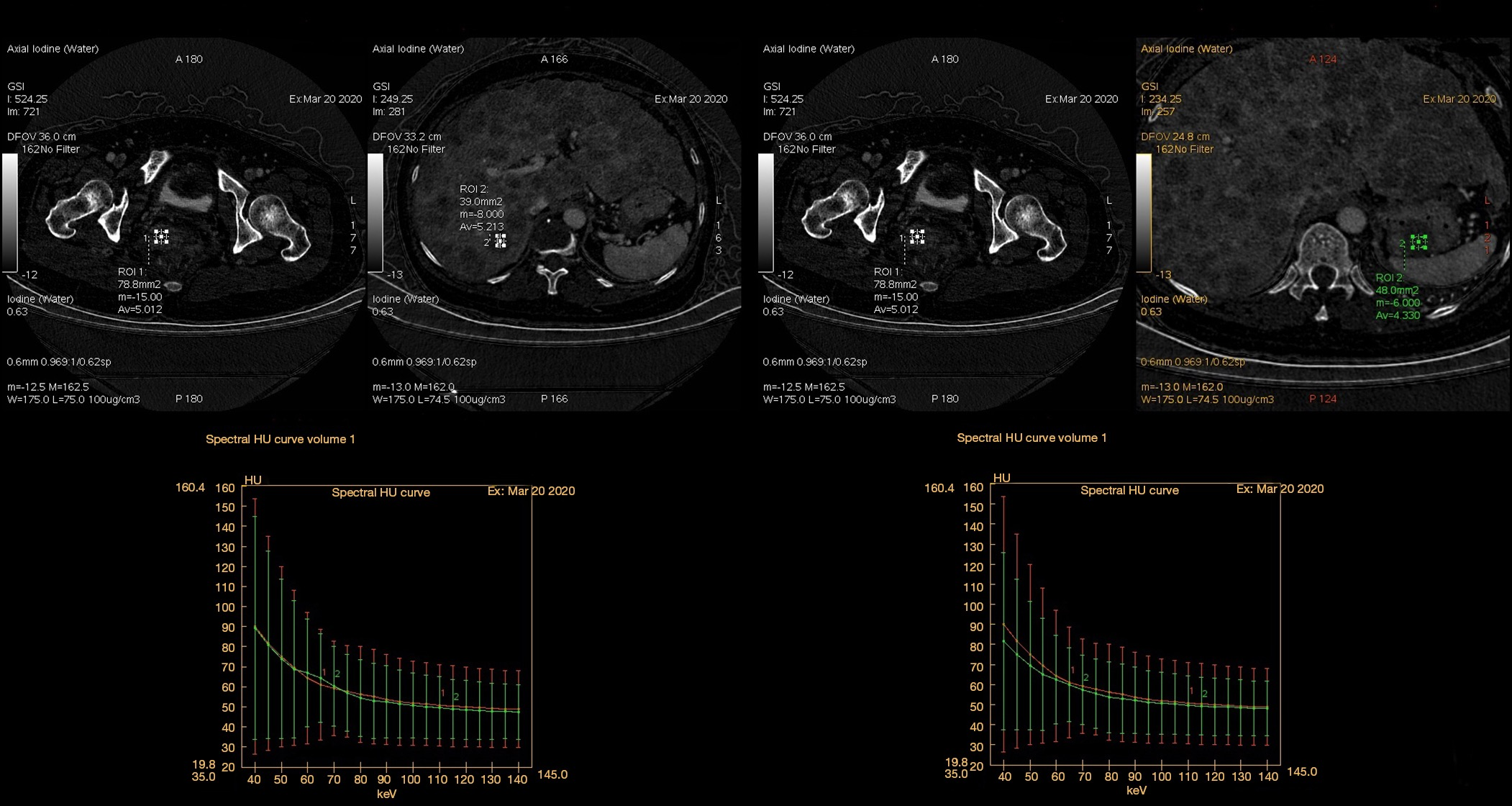 Figure 4 Abdomen energy spectrum CT. (A) The energy spectrum curve of the liver metastatic lesion overlapped with that of the rectal mass; (B) the curve of gastric fundus mass was very similar to that of rectal lesion. CT, computed tomography.

A multi-disciplinary discussion on 2020-03-19 suggested that the nature of gastric fundus lesions should be identified, but the patient refused to be examined again by gastroscope. Therefore, we performed abdomen energy spectrum CT on 2020-3-20 (Figure 4): the energy spectrum curves of gastric fundus, rectum and liver lesions were very close or almost overlapping each other, indicating that the nature of all three was consistent.

The timeline of the examination and treatment process after admission is listed in Figure 5. All procedures performed in studies involving human participants were in accordance with the ethical standards of the institutional and/or national research committee(s) and with the Helsinki Declaration (as revised in 2013). Written informed consent was obtained from the patient. 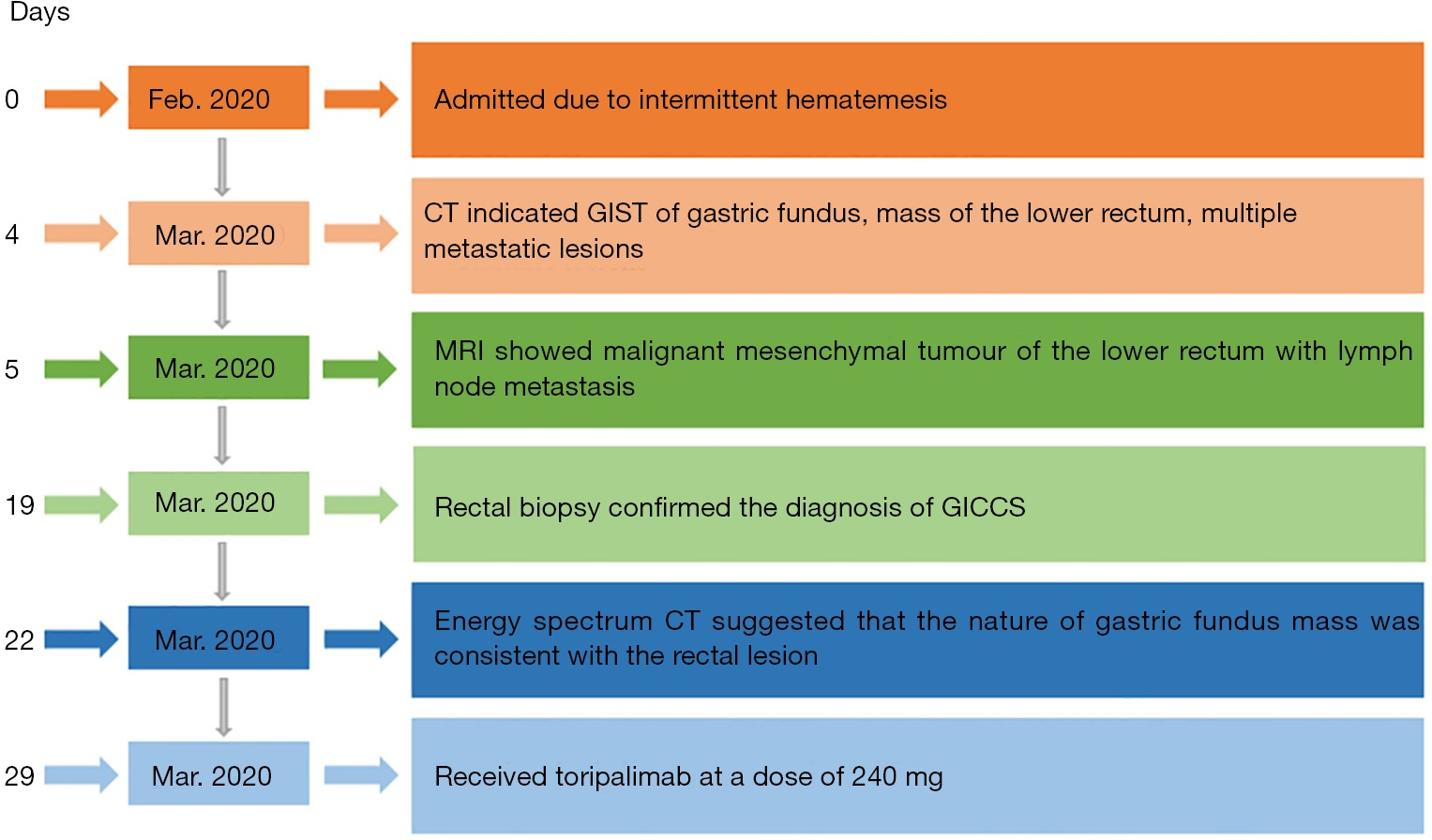 GICCS is a rare malignant tumour whose imaging features have not been well described, but the images of rectal mass in this case showed features distinct from common gastrointestinal tumours. Although initial CT was unable to identify the nature of rectal lesion, but pelvic MRI suggested that the tumour was in the submucosa of rectum, so rectal cancer could be excluded. A differential diagnosis is required for the following mesenchymal tumours. GIST, the images of which show mass of varying shapes inside and/or outside the intestinal lumen, may be even or uneven in density/signal, and can be obviously enhanced evenly or unevenly due to its adequate blood supply. The above features aligned with this case. However, a lymph node metastasis is rare in GIST cases (4). While the images from our case showed multiple enlarged and enhanced lymph nodes in the mesorectum, suggestive of metastases. Tashiro et al. (5) have studied 177 cases of GIST, yet only two cases (1.1%) were found to have a lymph node metastasis. So, we judged that rectal lesion of this case may not be a GIST. Intestinal lymphoma, despite thickening of the intestinal wall, was no significantly narrowing of the lumen due to a lack of hyperplasia of the fibrous connective tissue. Lymphoma rarely infiltrates directly into surrounding fat tissue (6,7) and often has a clear interface with it. The density/signal of CT or MRI tend to be even, the DWI/apparent diffusion coefficient (ADC) signal is significantly restricted, and can be mild to moderate evenly enhanced. In our case, the lesion caused intestinal stenosis, invaded adjacent fat tissue and showed an obviously uneven enhancement, thereby not meeting the criteria for a diagnosis of lymphoma.

This study also had some limitations, such as the failure to obtain the pathological results of gastric fundus mass due to patient resistance.

The imaging manifestations of GICCS are not only different from malignant epithelial tumors in the gastrointestinal tract, but also different from common mesenchymal tumors. According to current data, we think it is the most difficult to distinguish from GIST. Pathological confirmation is still needed (9). In addition, when patients are unwilling or unable to have multiple biopsies, energy spectrum CT is a good choice for homologous differentiation of masses.

Reporting Checklist: The authors have completed the CARE reporting checklist. Available at http://dx.doi.org/10.21037/tcr-20-1771

Conflicts of Interest: All authors have completed the ICMJE uniform disclosure form (available at http://dx.doi.org/10.21037/tcr-20-1771). The authors have no conflicts of interest to declare.

Ethical Statement: The authors are responsible for all aspects of the manuscript in ensuring that questions related to the integrity of any part of the work are appropriately investigated and resolved. All procedures performed in studies involving human participants were in accordance with the ethical standards of the institutional and/or national research committee(s) and with the Helsinki Declaration (as revised in 2013). Written informed consent was obtained from the patient for publication of this manuscript and any accompanying images.