Melanoma is a malignant tumor deriving from melanocytes, and has a high mortality rate (1). In the USA, melanoma was considered to account for 5% of all cancers in 2013, which indicates its high prevalence (2,3). Although in China the incidence of melanoma is not such high as that of the USA, the increasing morbidity and mortality rates over past years have attracted widespread concern (4). In the early stage, melanoma can be surgically removed, and the 5-year survival rate of melanoma patients is as high as 98% (5). Nevertheless, melanoma can easily metastasize to regional lymph nodes and result in poor prognosis, with a 5-year survival rate of only 16% (6,7). Various methods are used for the treatment of melanoma, including surgery, chemotherapy, radiation therapy, and immunotherapy (8,9). Dacarbazine is one of the most commonly used chemotherapeutic agents for the treatment of melanoma (10); however, only 5–10% of patients benefit from this treatment (11). The main reason is the drug resistance of dacarbazine due to various reasons including hypoxia exposure (12), BRAFV600E targeting (13), advanced melanoma (14). Melanoma is still a malignant tumor that is insensitive to traditional treatment methods such as chemotherapy drugs, so it is urgent to explore new treatments (15).

Autophagy is a self-cannibalization process that occurs in both normal and cancer cells. The cells reuse damaged proteins and organelles by autophagosomes to maintain cell homeostasis (16). Autophagy plays a dual role in cancer development and treatment. Previous studies have reported that autophagy is linked to chemotherapy resistance in cancer cells (17,18). In vivo experiments identify autophagy ATG7 to be essential for autophagy activation. Mechanistically, inhibition of the autophagic flux in dormant breast cancer cells leads to the accumulation of damaged mitochondria and reactive oxygen species (ROS), resulting in cell apoptosis (19). The inhibition of apoptosis enables the survival and proliferation of tumors and contributes to resistance to conventional chemotherapy agents (20). However, the mechanism underlying the relationship between autophagy and dacarbazine resistance in melanoma cells remains unclear and requires further elucidation.

In the present study, we explored the mechanism of miR-153-3p in the regulation of dacarbazine resistance of melanoma cells. The result revealed that miR-153-3p overexpression sensitizes melanoma cells to dacarbazine by suppressing ATG5-mediated autophagy and apoptosis, suggesting that targeting miR-153-3p may be a novel therapeutic strategy to treat melanoma patients.

We present the following article in accordance with the MDAR reporting checklist (available at http://dx.doi.org/10.21037/tcr-20-2660).

Cell viability was detected by Cell Counting Kit-8 (CCK-8; Beyotime Institute of Biotechnology, Shanghai, China). Cells were added into 96-well plates and treated with different concentrations of dacarbazine for 24 hours. The culture medium was then replaced in each well with 100 µL fresh medium containing 10% CCK-8 reaction solution and incubated for 2 hours. Absorbance were measured at 450 nm using a microplate reader (Thermo Fisher Scientific, Carlsbad, CA, USA).

9 The cell apoptotic rate was determined using the annexin V-fluorescein isothiocyanate/propidium iodide (PI) apoptosis detection kit (Multisciences). After washing with ice-cold phosphate-buffered saline three times, the cells were resuspended and incubated with 5 µL annexin V-FITC and 10 µL PI. A flow cytometer (BD Biosciences, US) was used to analyze the cell apoptotic rate. The flow cytometry excitation wavelength was 488 nm; a bandpass filter with a wavelength of 515 nm was used to detect FITC fluorescence, and another filter with a wavelength >560 nm was used to detect PI.

The 3'-UTR fragment of ATG5 containing the miR-153-3p binding sequence was cloned in a pMIR reporter vector, and a mutated plasmid was used as a control. The cells were then co-transfected with ATG5-WT or ATG5-MUT and miR-153-3p mimics using Lipofectamine 2000, according to the manufacturer's recommendation. Luciferase activity was tested using the Dual-Luciferase Reporter Assay System (Promega, Wisconsin, USA). 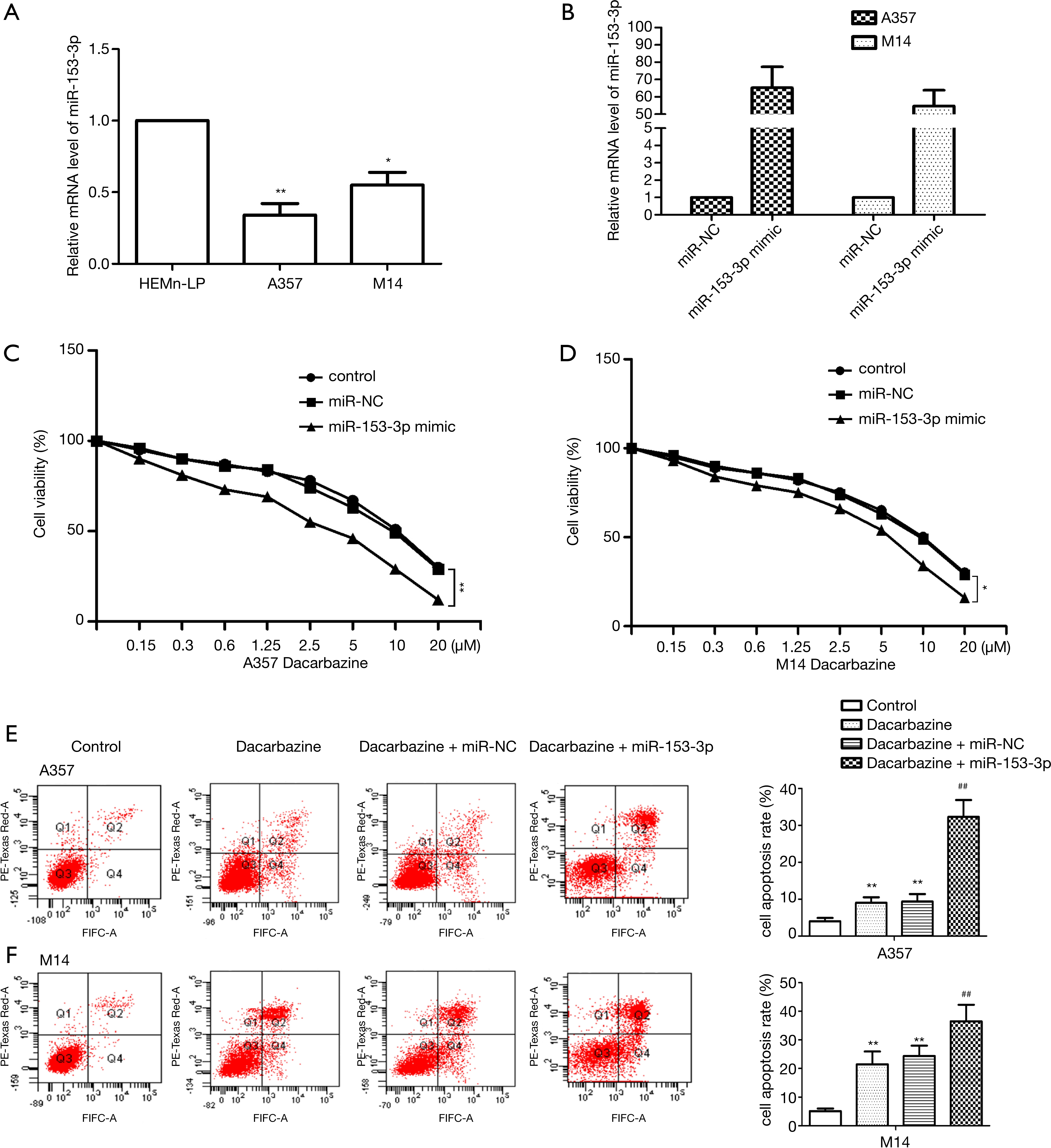 Figure 1 Upregulation of microRNA-153-3p (miR-153-3p) sensitized melanoma cells to dacarbazine. (A) Relative expression levels of miR-153-3p in melanoma cell lines (A357 and M14) and normal human melanocyte (HEMn-LP) were detected by quantitative reverse transcription polymerase chain reaction (qRT-PCR). *P<0.05, **P<0.01 compared with HEMn-LP cells. (B) After transfection with miR-153-3p mimic or miR-NC, miR-153-3p expression was detected by qRT-PCR. (C,D) Cell viability was measured by Cell Counting Kit-8 assay in both A357 and M14 cells. (E,F) Cell apoptosis was performed by flow cytometric analysis in both A357 and M14 cells. **P<0.01 compared with dacarbazine group; ##P<0.01 compared with dacarbazine + miR-NC group. 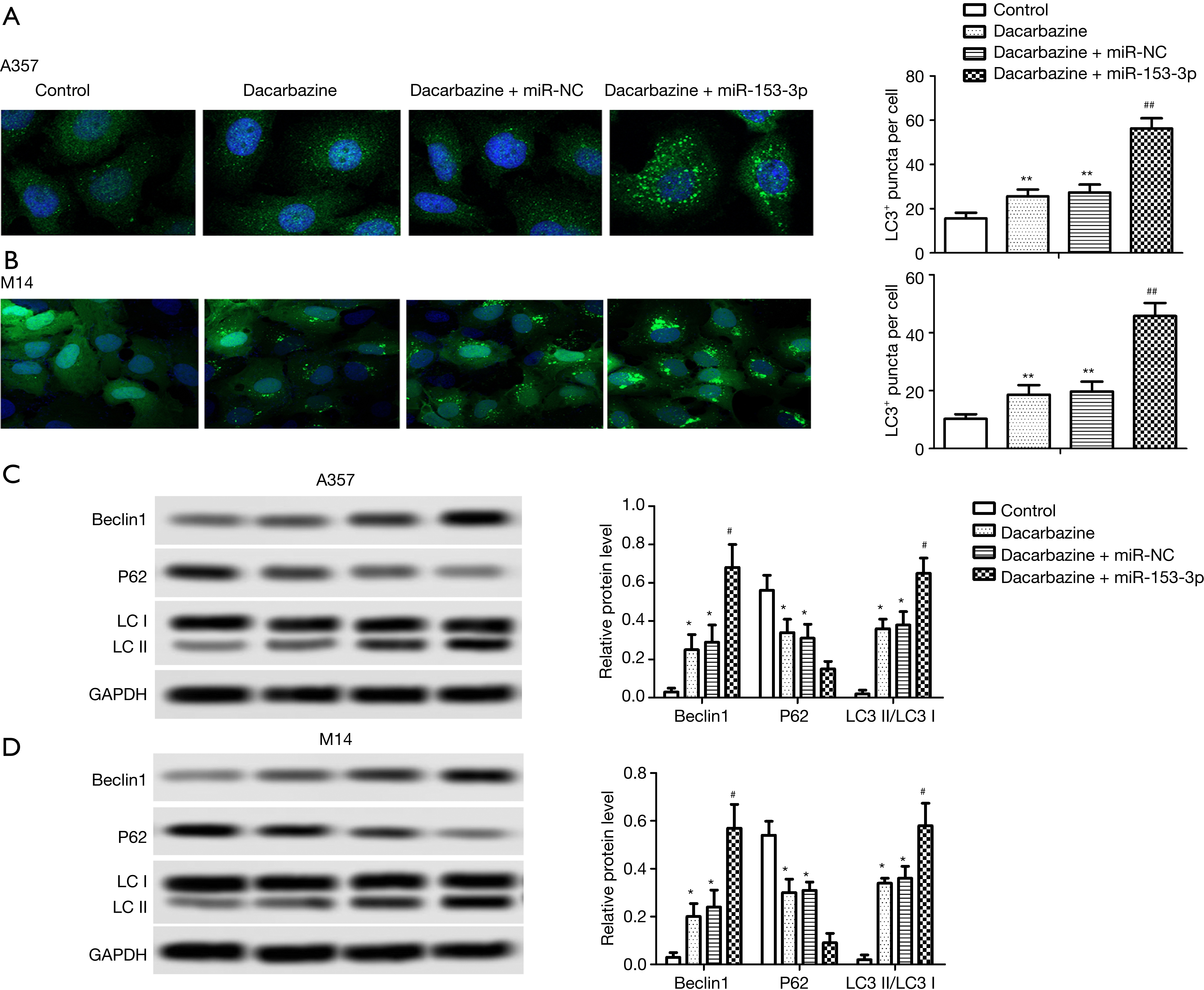 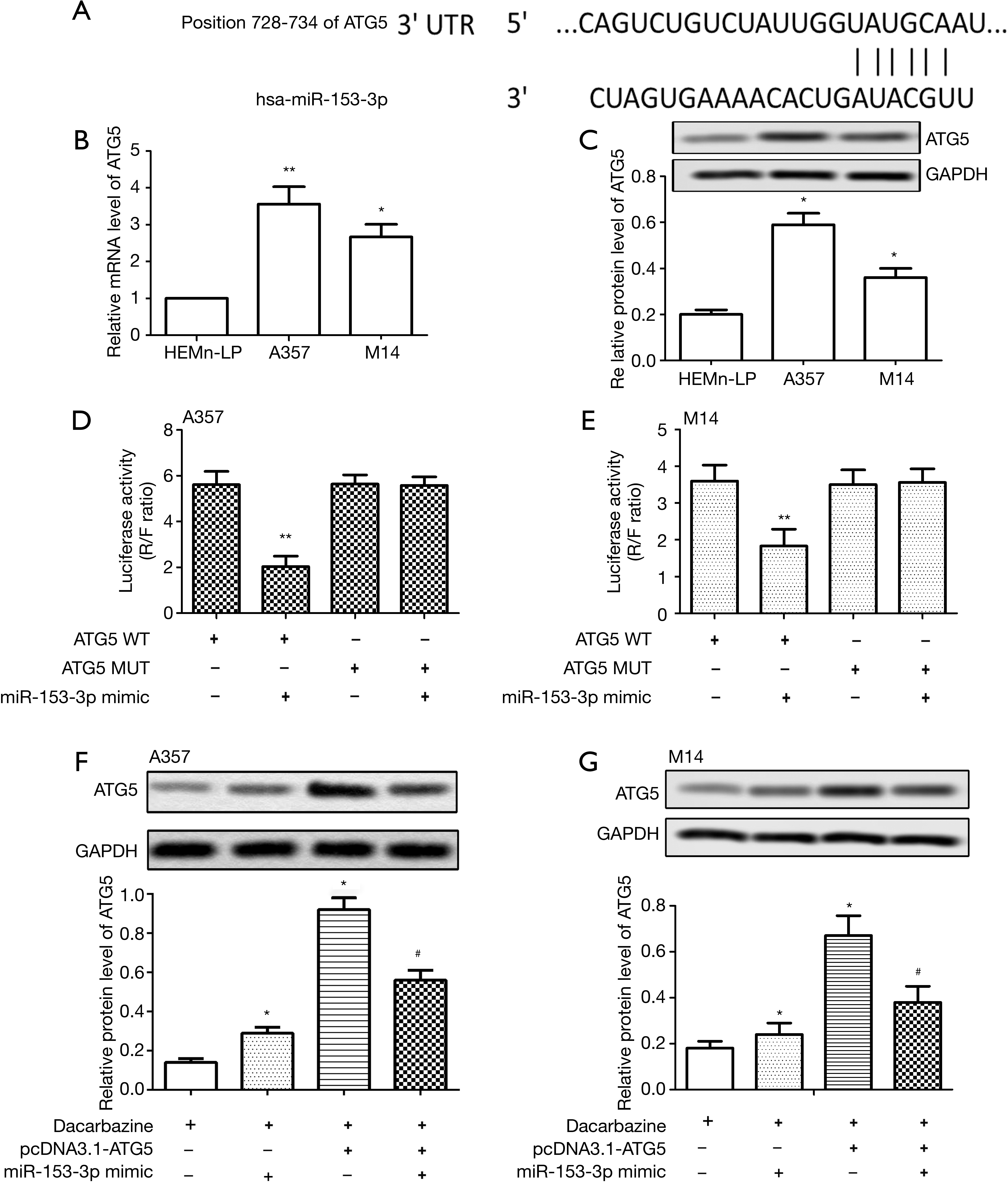 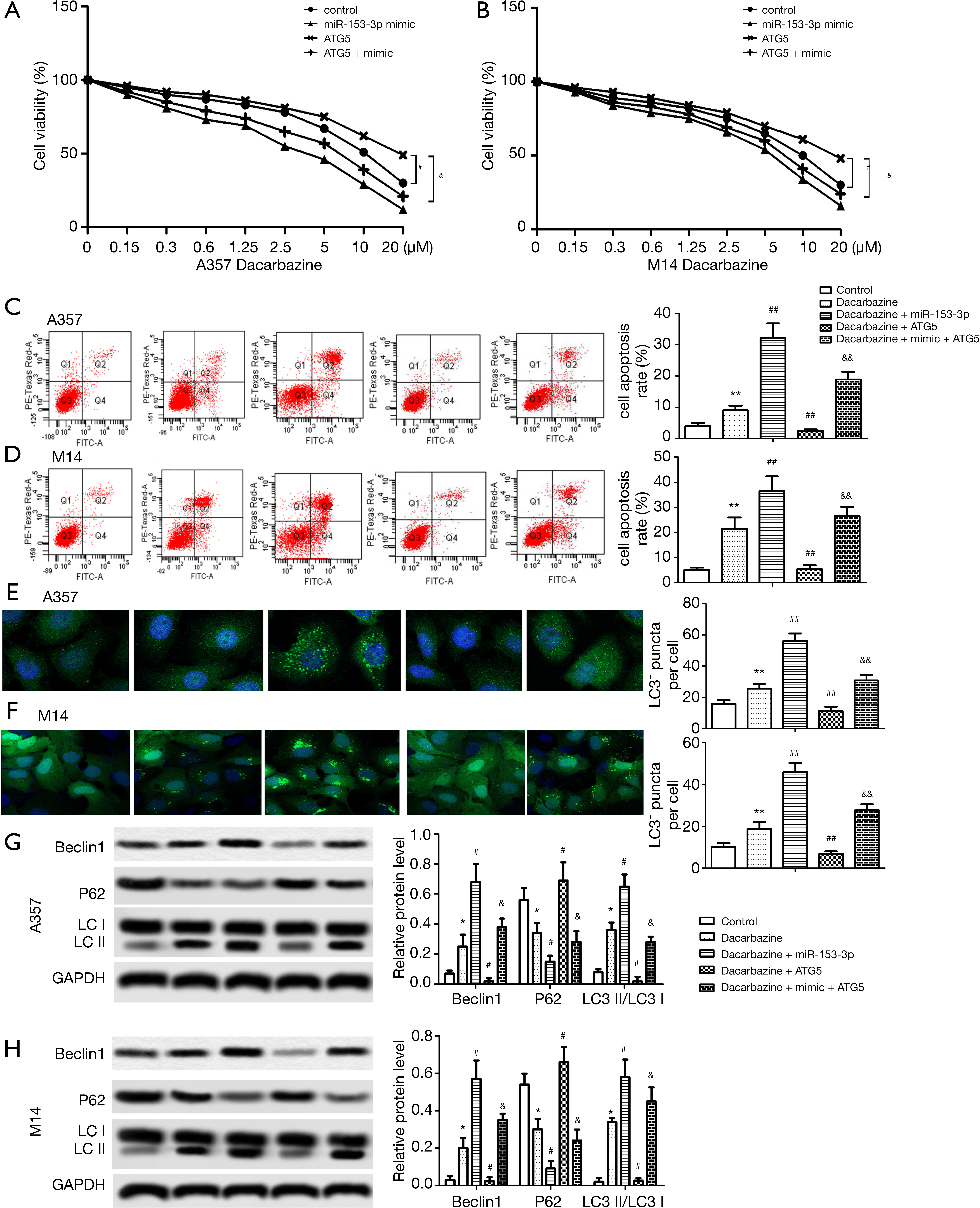 Melanoma is one of the most aggressive malignant skin tumors worldwide (30). Although surgical resection can increase the 5-year survival rates of patients with early-stage melanoma, there is no gold-standard treatment for advanced melanoma. Dacarbazine is a standard antineoplastic agent commonly used for melanoma treatment. However, the resistance of melanoma cells to dacarbazine inhibits the efficiency of this agent; therefore, it is important to investigate the underlying mechanism of dacarbazine resistance in melanoma cells. In the present study, we found that miR-153-3p overexpression sensitized melanoma cells to dacarbazine by suppressing ATG5-mediated apoptosis and autophagy, suggesting that targeting miR-153-3p may be a novel therapeutic strategy to treat melanoma patients.

20 It is well known that autophagy plays a regulatory role in the proliferation and death of cancer cells. Autophagy has also been linked to therapy resistance of cancer cells. Previous studies have demonstrated that chemotherapy might induce autophagy, which attenuates apoptosis, leading to drug resistance (36). Pei et al. reported that autophagy facilitates metadherin-induced fluorouracil resistance through the Adenosine monophosphate (AMP)-activated protein kinase (AMPK)/ATG5 pathway in gastric cancer (37). Autophagy is triggered during chemotherapy, and the inhibition of autophagy increases the chemosensitivity of castration-resistant prostate cancer cells (38). Besides LC3, Beclin1 is also important for the formation of autophagosomes (39). In the present study, dacarbazine treatment induced autophagy in melanoma cells by increasing autophagosomes, Beclin1 expression, and LC3 I to LC3 II conversion, and decreasing P62 expression. Moreover, miR-153-3p overexpression was observed to enhance dacarbazine-induced autophagy in melanoma cells. These results demonstrate that miR-153-3p overexpression enhances the sensitivity of melanoma cells to dacarbazine.

Taken together, there results of the present study show that the miR-153-3p/ATG5 axis plays a vital role in the regulation of dacarbazine resistance in melanoma cells. miR-153-3p was found to exhibit suppressive effects via directly binding and downregulating ATG5 expression, which subsequently increased sensitivity to dacarbazine and inhibited proliferation, as well as enhancing apoptosis and autophagy in melanoma cells, providing a basis to explore the functions of miRNAs on drug resistance in the treatment of melanoma.

Reporting Checklist: The authors have completed the MDAR reporting checklist. Available at http://dx.doi.org/10.21037/tcr-20-2660

Conflicts of Interest: All authors have completed the ICMJE uniform disclosure form (available at http://dx.doi.org/10.21037/tcr-20-2660). The authors have no conflicts of interest to declare.

Ethical Statement: The authors are accountable for all aspects of the work in ensuring that questions related to the accuracy or integrity of any part of the work are appropriately investigated and resolved. Ethical approval was obtained from the Ethics Committee of Medical College of Shanxi Datong University (No. 20190123).