Comparison of local control and survival outcomes between surgical and non-surgical local therapy on pelvic Ewing’s sarcoma patients: a meta-analysis

Ewing’s sarcoma (ES) is the second most common malignant bone tumor in children and adolescents (1). And pelvic is considered one of the most favorite bony location of ES and shows inferior prognosis comparing to ES in extremity (2).

The general therapeutic approach for pelvic ES is a multimodal protocol that include definitive local therapy, including local surgical and nonsurgical therapy, and systemic therapy with induction chemotherapy and postsurgical adjuvant chemotherapy (3,4). Surgical therapy indicates surgical resection of tumor with or without combination of radiotherapy and nonsurgical therapy refers to definitive radiotherapy without surgical resection. For the past decades, both local therapies were the most widely used local treatment in pelvic ES (5). It has improved the prognostic outcome in pelvic ES which is approaching the prognosis in nonpelvic ES patients (2,4). But the decision between surgical and nonsurgical therapy is still remained a challenge. The efficacy of both approaches is still a controversial topic in pelvic ES management. Different centers have reported conflicting results that some reported surgical patients benefited in higher local control (LC) rate comparing nonsurgical patients when other found no difference between them. It is still prone to bias since randomized controlled trials (RCTs) studies are considered infeasible and lack of strong evidence (6).

We present a systematic review of the existing evidence from the published studies to provide a comparation of the effects of surgical therapy with the nonsurgical therapy as local treatment strategies on improving the LC and survival outcomes of pelvic ES patients treated with standard systemic therapy. A meta-analysis was performed to integrate the existing studies and estimate the difference of progression-free survival (PFS) and LC rates between the surgical and nonsurgical therapy pelvic ES patients. We present the following article in accordance with the PRISMA reporting checklist (7) (available at http://dx.doi.org/10.21037/tcr-20-1222).

The protocol has been registered on the International Prospective Register of Systematic Reviews (PROSPERO) website with the register ID PROSPERO CRD 42020149224.

The PubMed, Embase, Cochrane and Web of Science databases were searched from January 1990 to November 1, 2019, and the PROSPERO database was searched up to August 2019 to identify the existing relevant studies. The article language was restricted to English, and search terms “Pelvic” and “Ewing Sarcoma” as well as their alternatives were used to search for both reviews and original papers.

Studies are enrolled in the review if they met the following eligibility criteria: (I) study investigated pelvic ES patients accepted systematic treatment with preoperative and postoperative chemotherapy included vincristine, doxorubicin, cyclophosphamide, ifosfamide and etoposide; (II) patient accepted local treatment with surgical therapy or nonsurgical therapy with definitive radiotherapy; (III) ES is confirmed with histological positive biopsy. The exclusion criteria were as follows: (I) studies published in the form of an animal study or case report; (II) studies included patients with multiple primary ES tumors or primary ES in other sites other than the pelvis; (III) small sample size less than 30 patients; (IV) single-arm treatment studies; (V) repeat studies that reported in the same patients; (VI) therapeutic strategy is unclearly stated.

Initially, two reviewers screened the titles and abstracts from the search results to remove the duplicates and exclude studies that did not align with the review purpose. Then, two reviewers further assessed the full-text publications and confirmed the final study selections.

To define treatment efficacy, we extracted the patient characteristics, interventions and following outcomes from the studies: PFS and LC rates; the data were separately recorded for the different treatment. The patients characteristics include age, gender, tumor size, location in pelvic, extend of disease, LC approaches, radiotherapeutic doses, surgical margin and chemotherapeutic respond. One reviewer extracted data from the included studies with a standard data extraction table. A second reviewer verified and checked the data of the studies.

Assessment of study quality and risk of bias

Two reviewers independently examined the study quality and potential risk of bias in estimating the comparative effectiveness of interventions of the included nonrandomized control studies. The “Grading of Recommendations, Assessment, Development, and Evaluation (GRADE)” (8) method was used to assess the study quality, and the “Risk of Bias In Nonrandomized Studies-of Interventions (ROBIN-I)” (9) tool was used to evaluate the risk of bias.

We generated meta-analysis for the included studies to compare their LC and PFS rate among different local treatments. For studies with available survival and LC data, the LC and PFS were directly extracted from the paper. For studies that provide survival curve, Engauge Digitizer (version v12) was used to fit the curve and gather the corresponding data represented in the survival curve (10).

We identified 878 studies and included 10 retrospective cohort or comparative studies in the review (5,14-24). Figure 1 summarizes the flow diagram of the study retrieval and selection process. 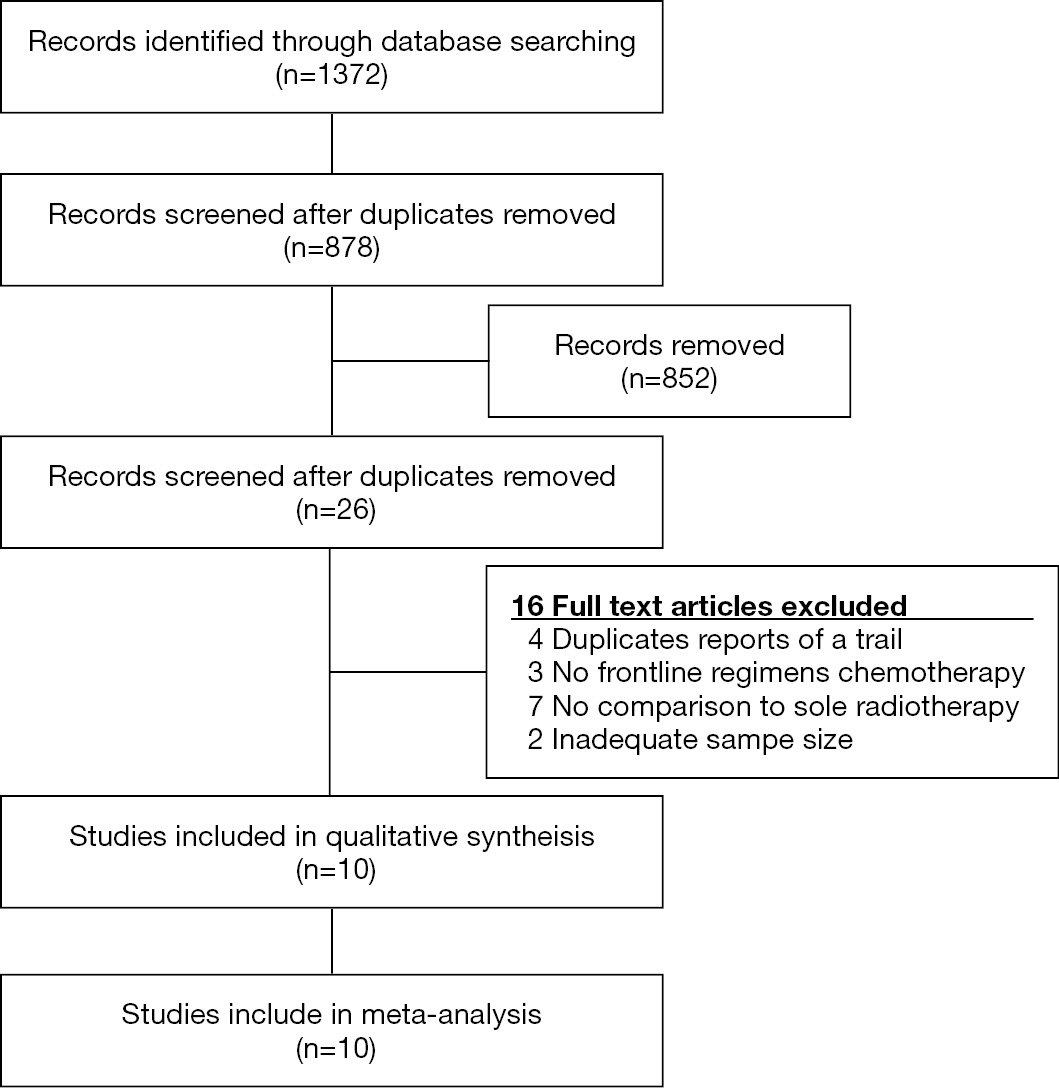 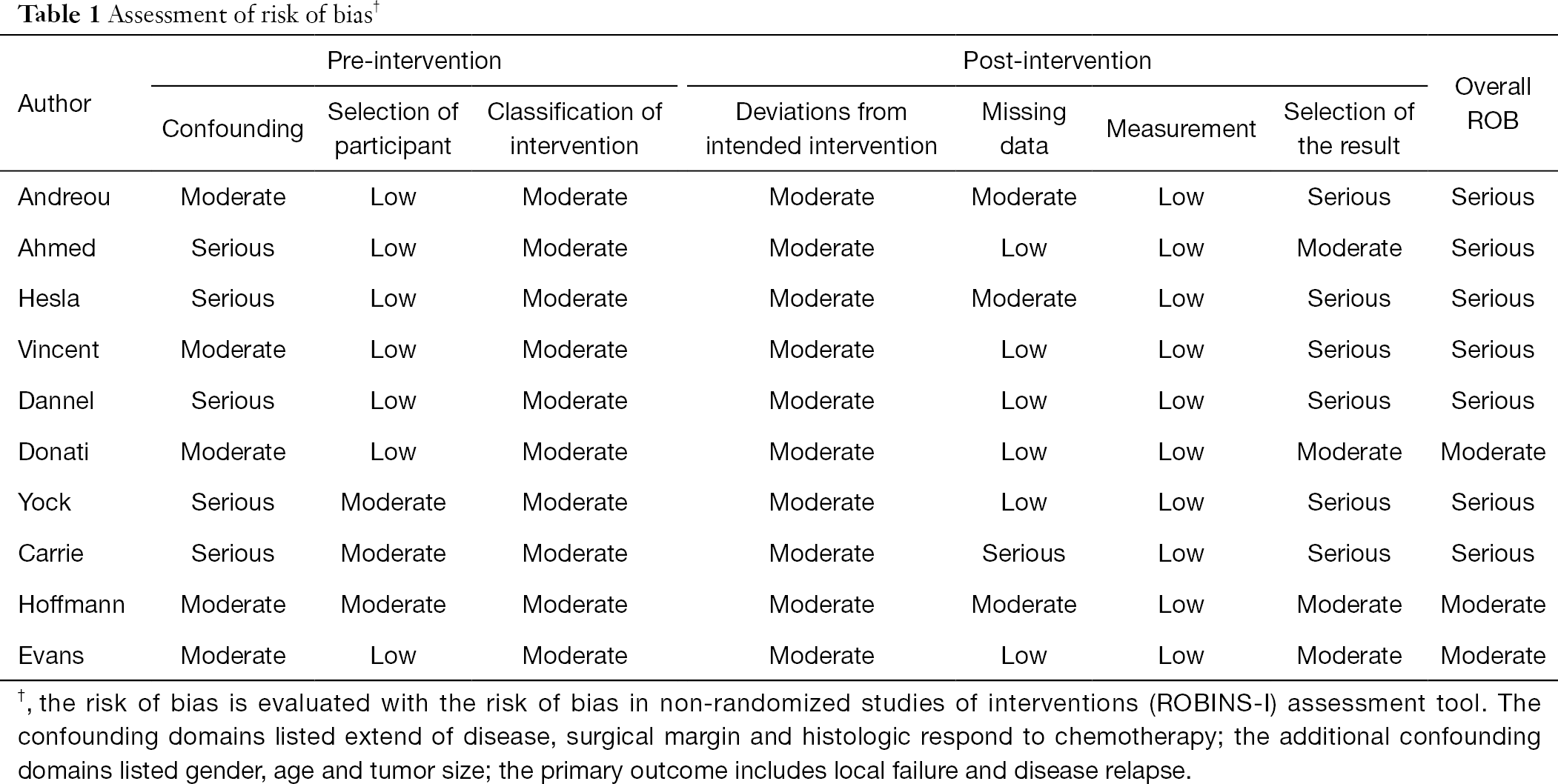 These studies included a total of 921 pelvic ES patients and 84.91% (782/921) patients with reported outcomes and administration of local management and standard systemic therapy were enrolled in the meta-analysis. The patient characteristic across the enrolled studies were listed in Table 2. They were follow-up a duration ranging from 25.9 to 99.6 months (median 66 months). The pelvic ES patients consisted of 56.78% (444/782) patients accepted surgical therapy and 43.22% (338/782) patients accepted nonsurgical therapy. Among the surgical resection patients, 63.51% (282/444) received a combination of adjuvant radiotherapy, which was applied additional to surgery based on surgeon decision. The nonoperative patients received definitive radiotherapy with radiation doses ranged from 50–66 Gy. The adjuvant radiation doses were in range from 40–55 Gy. 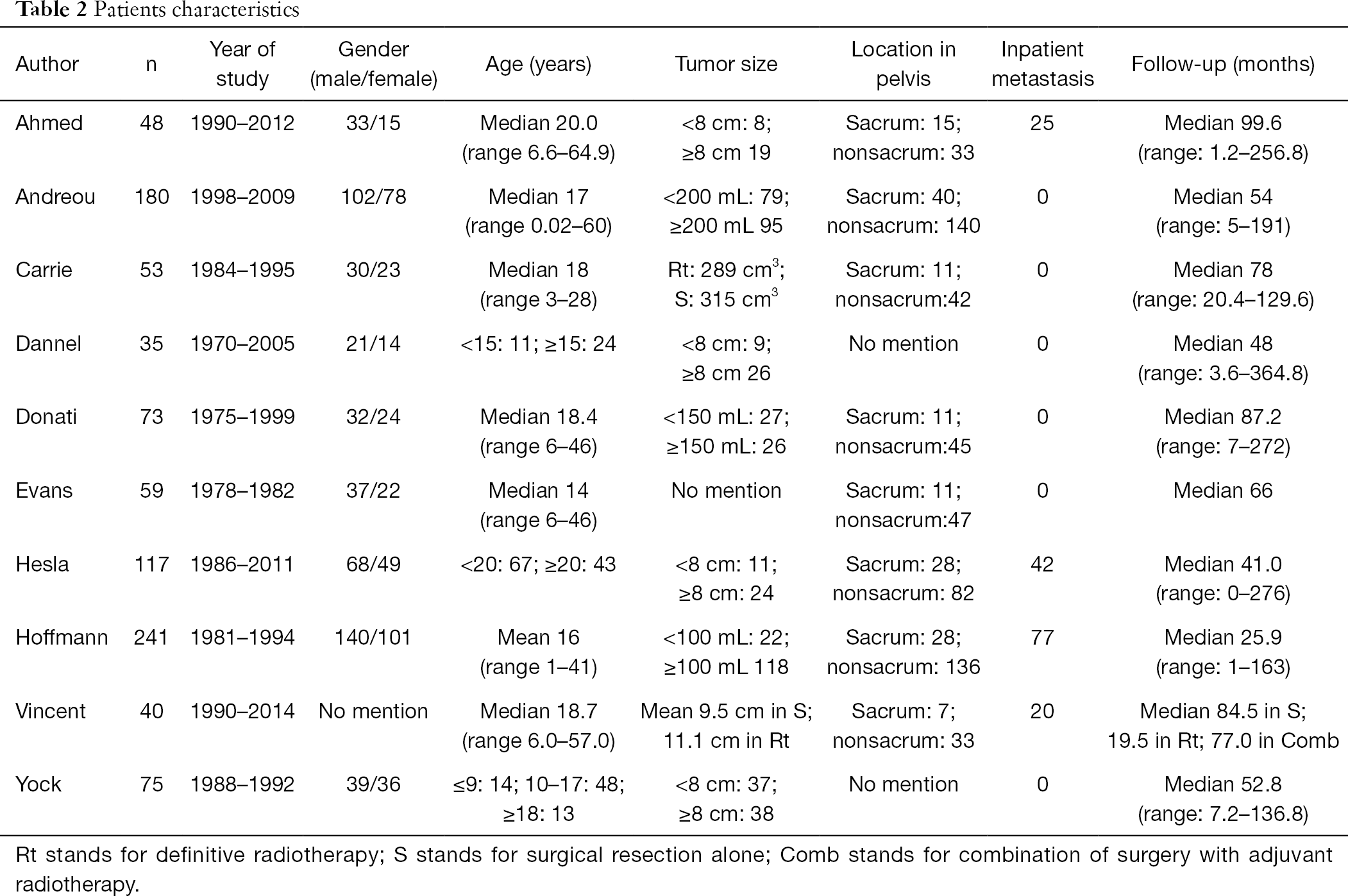 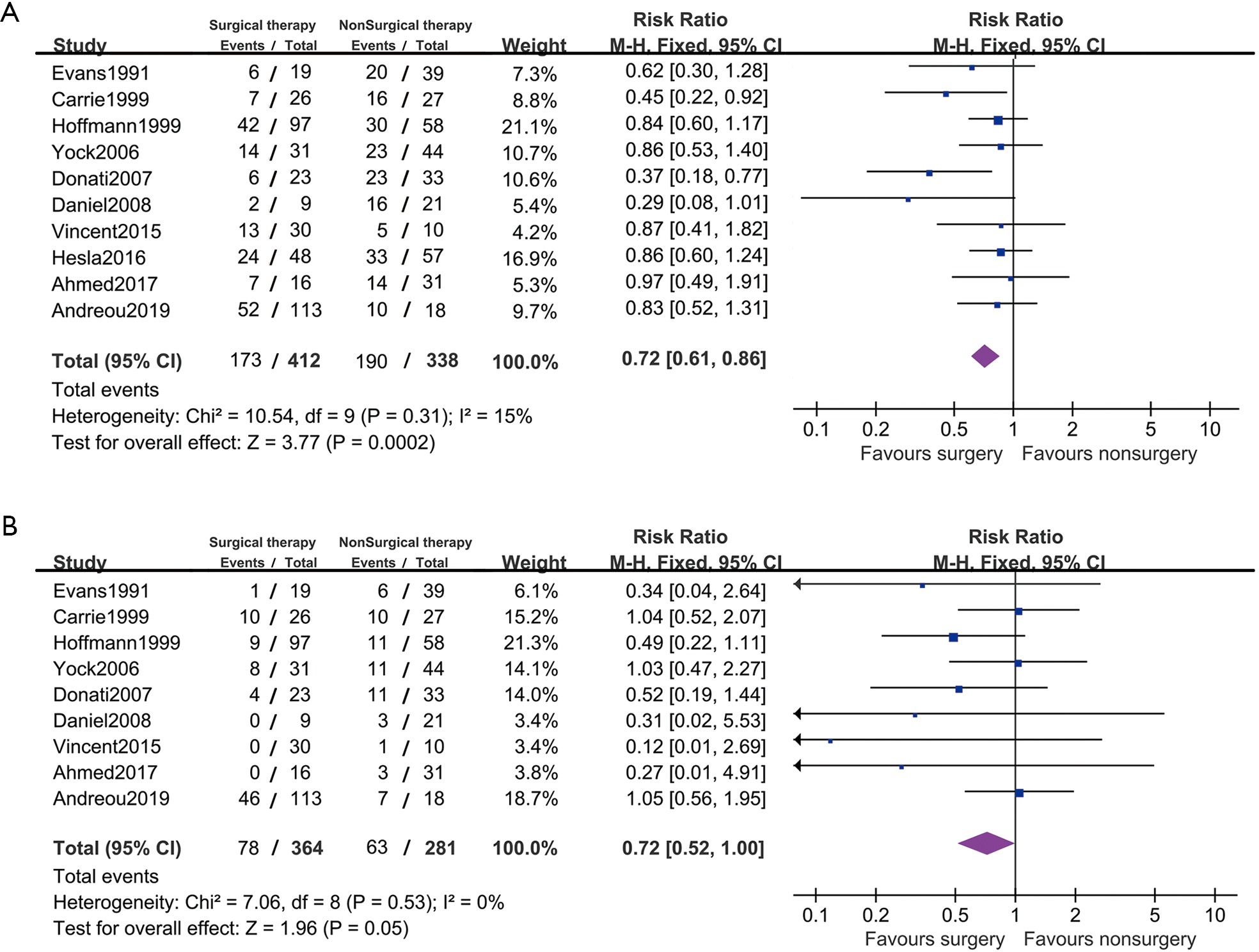 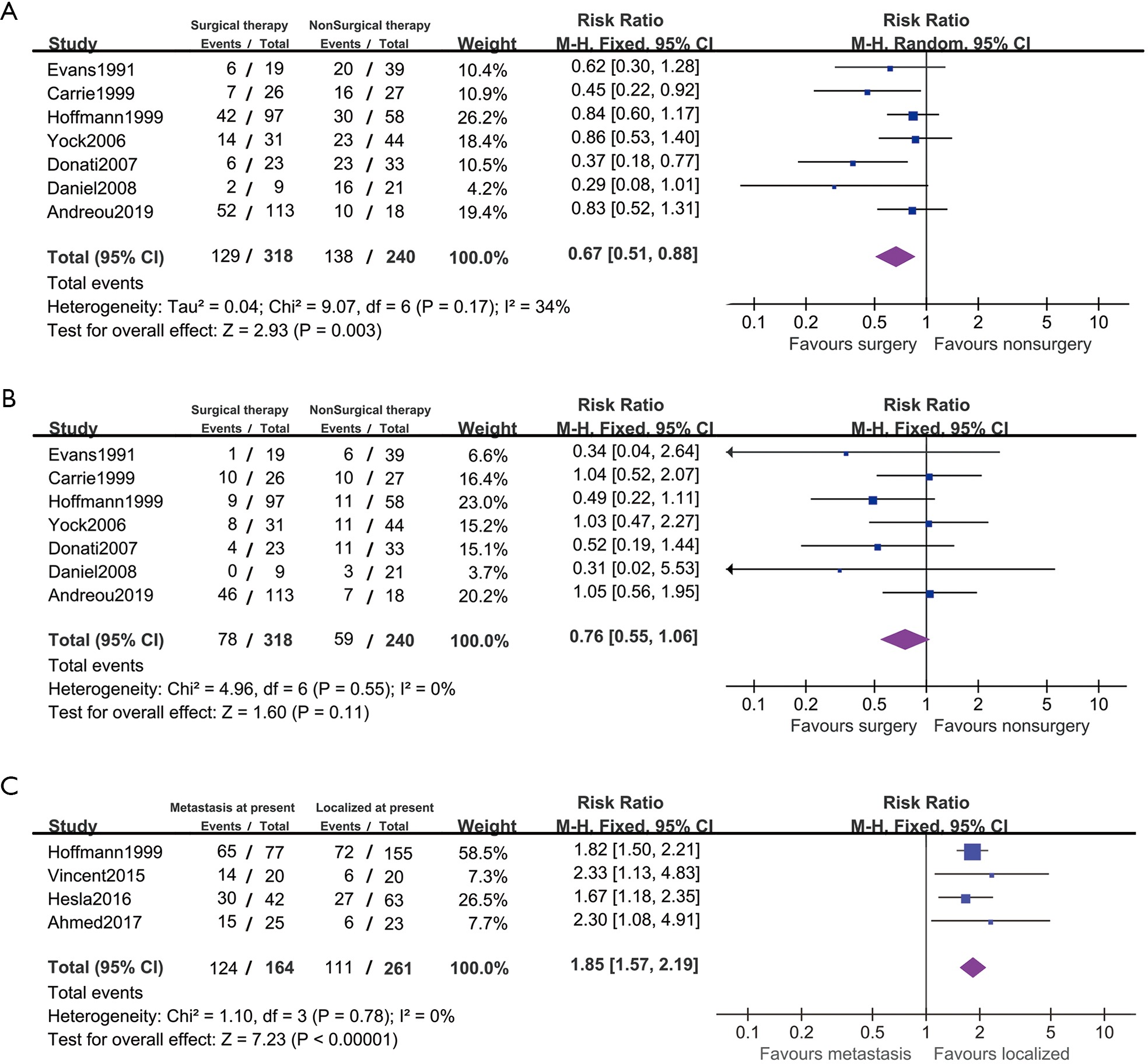 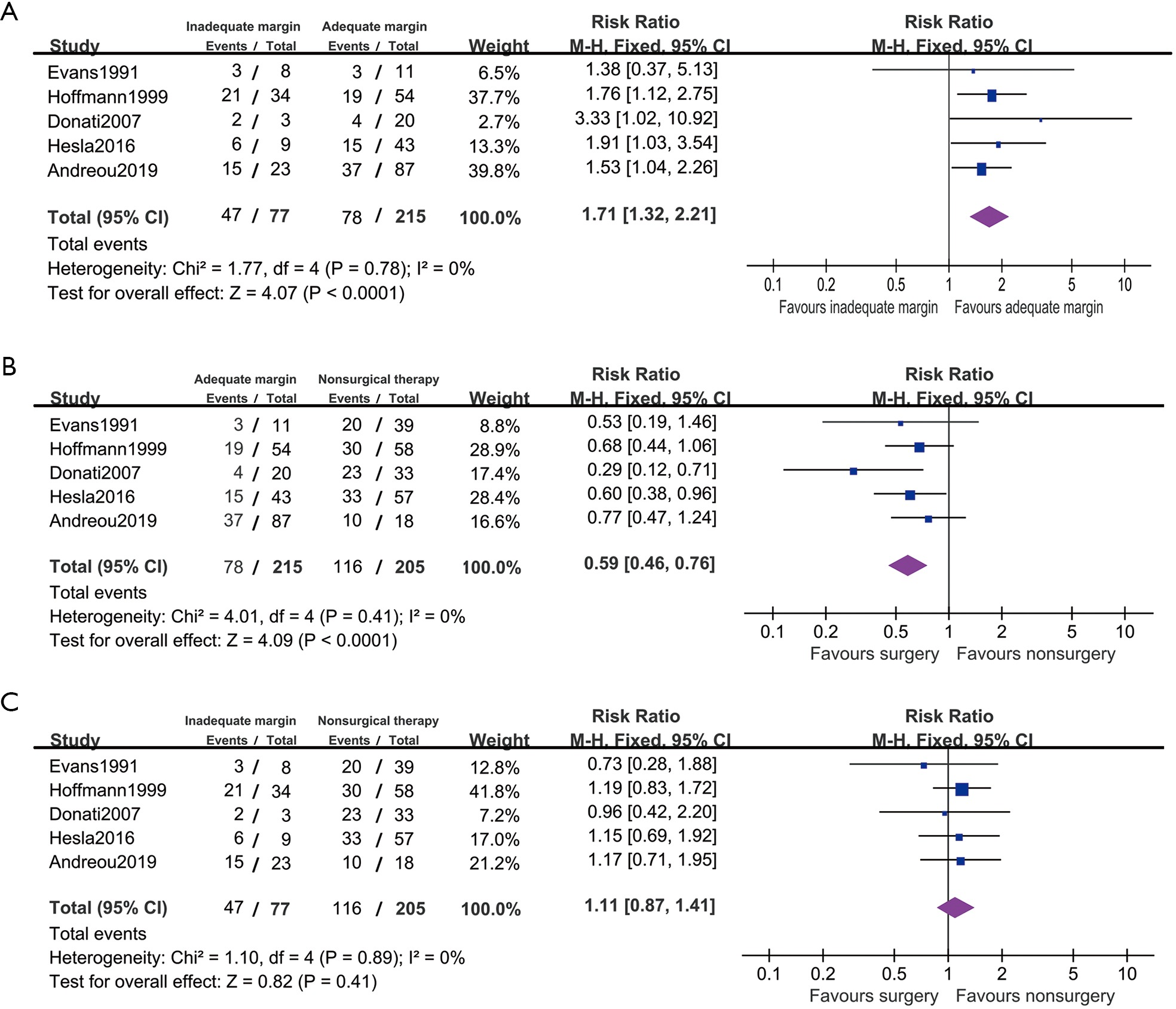 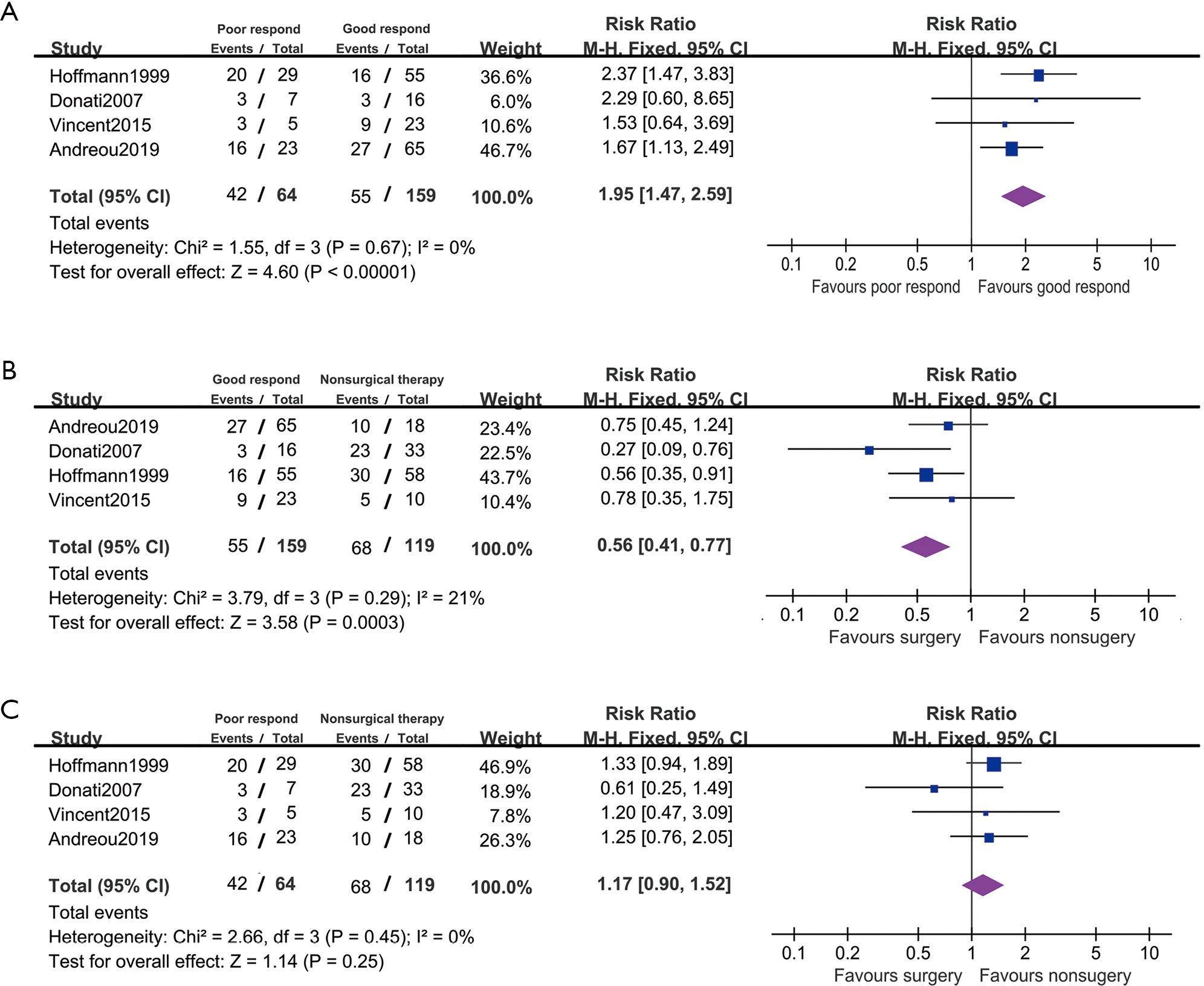 Surgical patients are reported advantage in surviving comparing to nonsurgical LC approaches based on population research (25,26). Our study reveals that patients with surgical therapy have higher PFS and LC than nonsurgical patients (PFS: RR 0.72, 95% CI: 0.61–0.86, P<0.001; LC: RR 0.72, 95% CI: 0.52–1.00, P=0.05). It is consistent with previous literature review showing patients with surgical therapy in pelvic ES management generally obtained better outcome than those with nonsurgical local therapy (5). But in mixed site ES, it is accepted that surgical patients are often considered to show statistically comparable OS an PFS rate to those without surgical therapy (27). We assume it as a result of the pelvic ES is differentiated from the extremity ES for its larger volume and relatively radiation-resistant which indicates poor effect of the nonsurgical therapy (28). In localized patients, we notice surgical patients consistently shows advantages in PFS comparing those without surgery (RR 0.67, 95% CI: 0.51–0.88, P=0.003). But no included studies report the subgroup outcomes among different LC approaches in patients and the metastatic subgroup analysis remained infeasible. It suggests the localized patients is recommended to have surgical resection and further investigation is needed to illustrate the local approaches effect on primary metastatic patients.

The administration of surgical therapy is challenging with inadequate surgical margin in pelvic ES (28). From the included studies, we notice that up to 26.4%surgical patients are reported inadequate margins. The results show patients PFS is negative associated with inadequate margin to the adequate resected patients (RR 1.71, 95% CI: 1.32–2.21, P<0.001). And the adequate resected patients show higher PFS to the nonsurgical patients (RR 0.59, 95% CI: 0.46–0.76, P<0.001). It is consistent with the previous report that adequate surgical margin helps patients obtain significantly reduced local recurrences and improved the PFS (29,30). The patients with inadequate margin show no statistical difference in PFS to those nonsurgical patients (RR 1.11, 95% CI: 0.87–1.41, P=0.41). The inadequate resection is related to intrasurgical tumor dissemination and appear higher risk in developing local and combined relapses (29). It suggests that surgical resection is primarily recommended in resectable pelvic ES patients and surgeon should consider the feasibility of adequate resection of the primary tumor before the administration of surgery resection.

Our review is limited by several weaknesses. First, the pelvic ES studies are sporadically reported in metastatic subgroups outcome between surgery and nonsurgical therapy among the existing trails. It induces difficulties in subgroup analysis of the surgical or nonsurgical therapy indications in metastatic pelvic ES Second, the follow-up period is long in pelvic ES studies. Thus, baseline confounders on the influence of different treatments on patient survival inevitably exist like local technique like limb sparing surgery and modern radiotherapeutic methods were not used in old era (3,4,34-37). Third, our review is limited by no eligible high-quality evidence like RCT researches. It recommends the observation studies reports concrete clinical manifestation and reduce their bias on influence patient’s prognosis.

Administration of Surgical therapy is primarily recommended in localized, resectable and good chemotherapeutic respond to nonsurgical therapy in pelvic ES. Inadequate resection and poor chemotherapeutic respond are negative prognostic factors in surgical patients and PFS in these patients with administration of surgery are not statistically different to nonsurgical patients.

Reporting Checklist: The authors have completed the PRISMA reporting checklist. Available at http://dx.doi.org/10.21037/tcr-20-1222

Conflicts of Interest: All authors have completed the ICMJE uniform disclosure form (available at http://dx.doi.org/10.21037/tcr-20-1222). The authors have no conflicts of interest to declare.